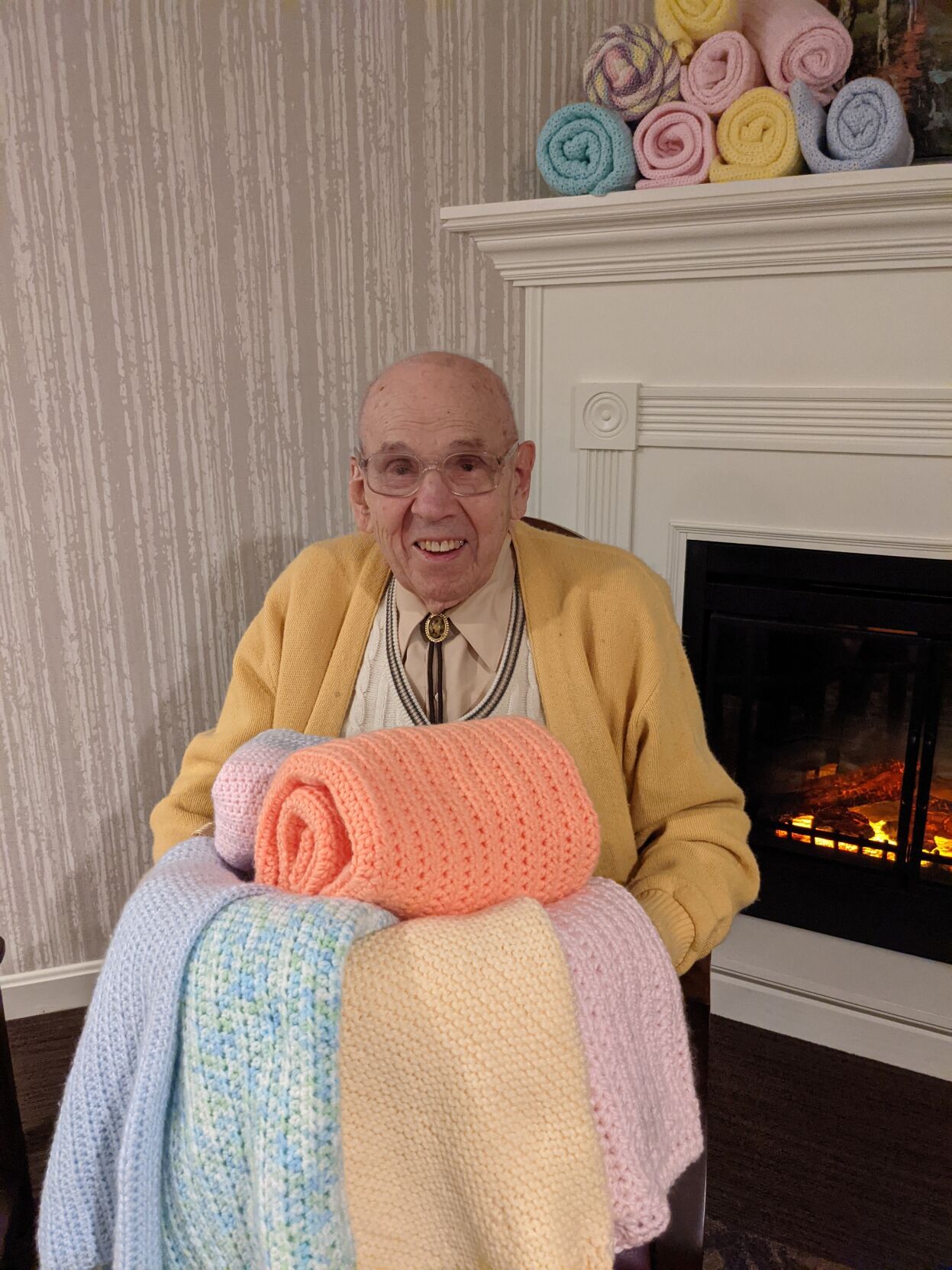 Ed Ebersole with some of the blankets he’s made. He taught himself to crochet at age 90, using a book from Reader’s Digest. 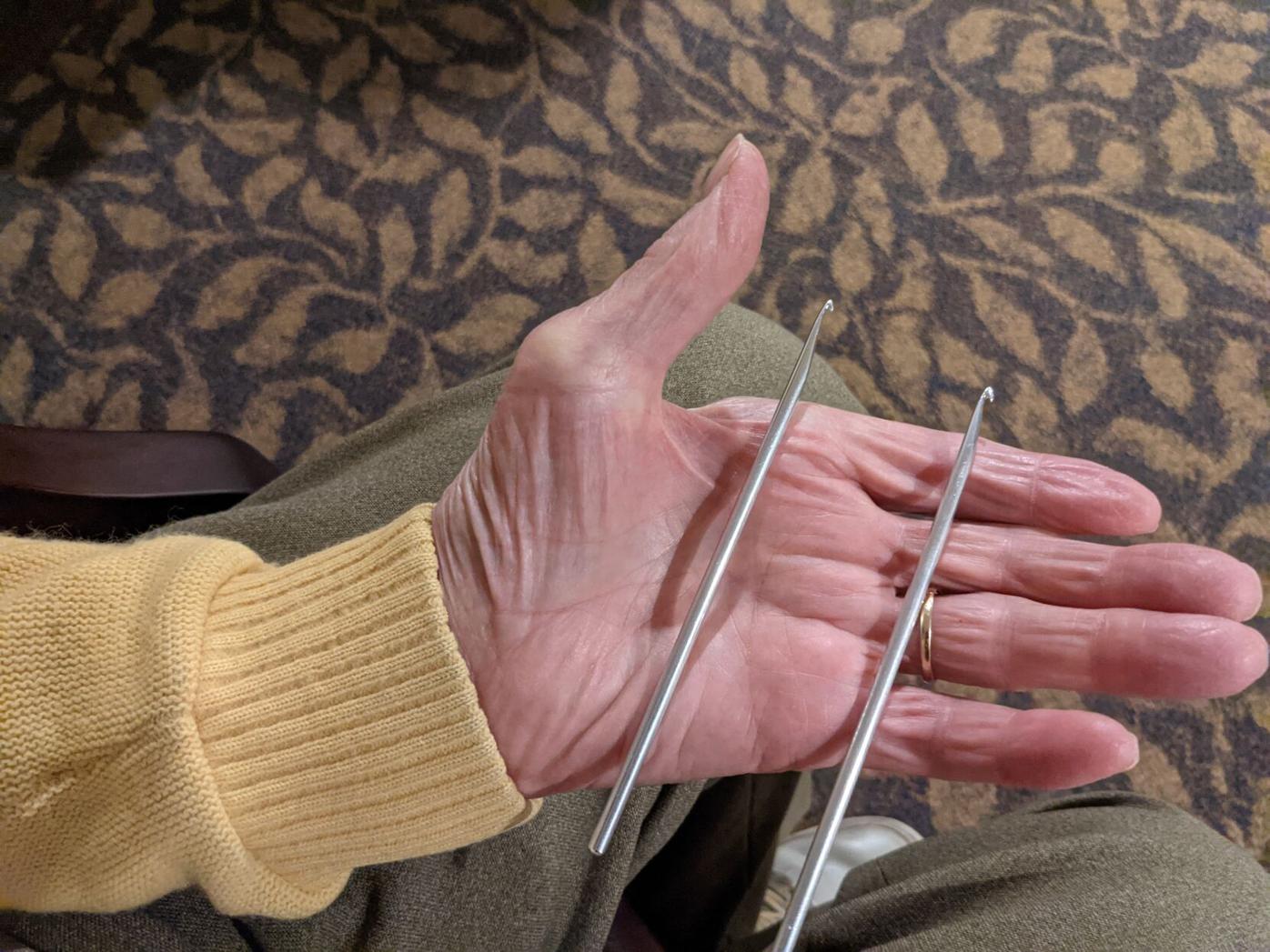 Ed Ebersole, 100, didn’t like the crochet hooks available on Amazon or in stores. So, he went to the woodshop and made his own. Here, he displays two of them.

Ed Ebersole with some of the blankets he’s made. He taught himself to crochet at age 90, using a book from Reader’s Digest.

Ed Ebersole, 100, didn’t like the crochet hooks available on Amazon or in stores. So, he went to the woodshop and made his own. Here, he displays two of them.

In a world where a phone call from a stranger often goes directly to voicemail, Ed Ebersole picks up before the second ring. He would love to talk about his 100 years on the planet, 78 of them married to his lovely June. He definitely wants to explain how he taught himself to crochet at age 90 and now creates feathery blankets for children who need warmth. Yes, he’s about to finish his 50th blanket for Project Linus, a national charity that collects and donates newly made blankets. Ed started making blankets about eight years ago after he and June moved to Homestead Village, a Lancaster continuing care community. Of course he makes his own crochet hooks, because he likes them better than the ones he can purchase.

“He is our oldest volunteer,” says Karen Longenecker, Homestead Village’s life enrichment and volunteer coordinator. “He’s such a positive man.”

Residents created a knitting and crocheting group before Karen began working at Homestead Village about 15 years ago. Ed joined when he and June moved to their apartment in 2012. For a time, Ed recalls, crafters would get together. Gatherings, however, ended long before the pandemic when participants decided to work at home or dropped out of the group. Residents still make blankets, though. Every few months Karen fills large trash bags with colorful blankets that go to Project Linus.

“I’m doing something, and it’s benefiting someone,” explains Ed, who can’t imagine just plain relaxing. He credits his childhood during the Depression for fostering a strong belief in staying active. “You either had to work or you didn’t eat,” he recalls.

That attitude seems to be a family trait. “I think we’re all that way,” explains Robert Ebersole, Ed’s 88-year-old brother. “We just liked to keep busy.”

Robert still lives in Londonderry Township, where he grew up with Ed, three more brothers and one sister. Robert recalls that his older brother loved to tinker with cars and helped make ice cream for the family every Sunday. The younger Ebersole says Ed probably now fills his days with activities to sharpen his intellect. “His mind is so good,” Robert observes.

Says Ed: “It’s been good therapy, something I can do and not sit around all day.”

Fact is, Ed chose activities to fill the hours at his wife’s bedside after June’s health began failing a few years ago. He would crochet or work on jigsaw puzzles. June died on Dec. 31, but Ed keeps going, even regularly toting his dirty clothes down the hall to the laundry room every week. “Well, nobody else is going to do it,” he says.

That belief seems to have shaped Ed’s career. He turned his proficiency for mechanics into a job at an auto garage in Elizabethtown, where he noticed a coworker’s attractive daughter chauffer her father home for lunch and back to work every day before she returned to her job at a nearby garment factory. Ed soon asked for permission to date June Johnson, and they married on a snowy Palm Sunday in Elizabethtown in 1942. The couple settled into a house and had no children. Ed did a short stint in the Army, making sure supplies went to the right places from a warehouse in Atlanta, before returning to his job at the garage. Later on, Ed says, he found work at a hardware store, repairing appliances before starting his own business.

“I used to tell people I made the ladies happy — because I repaired their appliances,” he says. His proudest work achievement came when he restored the Frigidaire at Fallingwater, the historic landmark designed by famed architect Frank Lloyd Wright in Mill Run. Electrolux, which owns Frigidaire, named Ed its oldest U.S. serviceman in 2003.

Then Ed began feeling tired. “I continued to work, but the tool box was getting too heavy and the steps were getting too long and hard to climb,” he wrote in an essay explaining his 2009 diagnosis of non-Hodgkin lymphoma to friends and family.

Once chemotherapy treatments began, gardening also became too strenuous. Although Ed dug his garden and planted onions and cabbage, he found himself too weak to continue. Friends harvested his plants, mowed the lawn and trimmed the forsythia.

Ed, however, still needed something to do. He used a Reader’s Digest book about knitting and crocheting to teach himself a craft. Ed says he chose crochet because he didn’t want to deal with the two needles required for knitting. He bought a crochet hook and started making squares and dish cloths to practice. He made a yellow and white tablecloth for his wife as his disease entered remission.

After the coupled moved to Homestead Village, Ed volunteered to sort mail for his apartment building and offered his services in the resident-run woodshop. He made his own crochet hooks by repurposing used refrigerator rods.

His neighbor noticed his devotion to June. “He is a wonderful guy, and he took great care of his wife,” says Shirley Wertz, who lives across the hall. Their floor has a game room, where masked residents, following social distancing rules, will often gather around a long table to work on a shared jigsaw puzzle. Not Ed, though. Shirley regularly delivered a portion of the puzzle pieces, on a tray, to Ed so he could put the pieces together while sitting with June.

These days, Ed has more free time. He’s about to finish a light blue blanket before choosing more yarn. Friends often buy yarn for him or he finds something in the apartment building’s craft room.

Bob Adams has something that most people do not — a memory from 1923.

Editor's note: This is an accompanying article to "Air Force, father, husband: Quarryville's…

Knowing Lancaster County's rich history could earn you more than $3,000; here's how

The youngest child at a Passover Seder — a Jewish religious service and dinner — traditionally asks four questions, each beginning with: “Why …

This past Thanksgiving, I had no plan to bake or buy a pie. My plan for the holiday was to hike with my stepdaughter and enjoy a solitary meal…