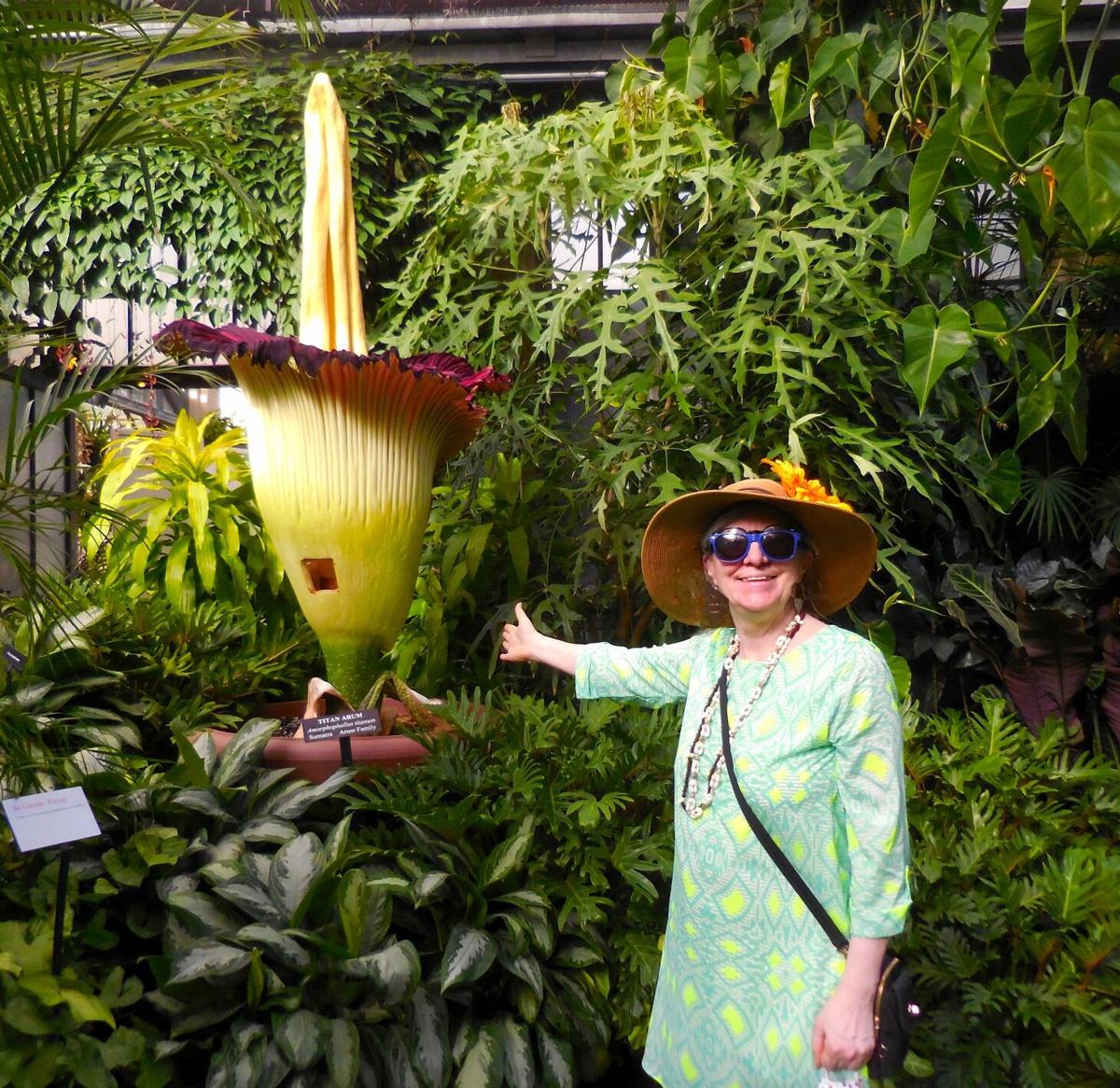 Joan and Barry Decker saw the rare corpse flower at Longwood Gardens four times (and she took off her mask for this photo). 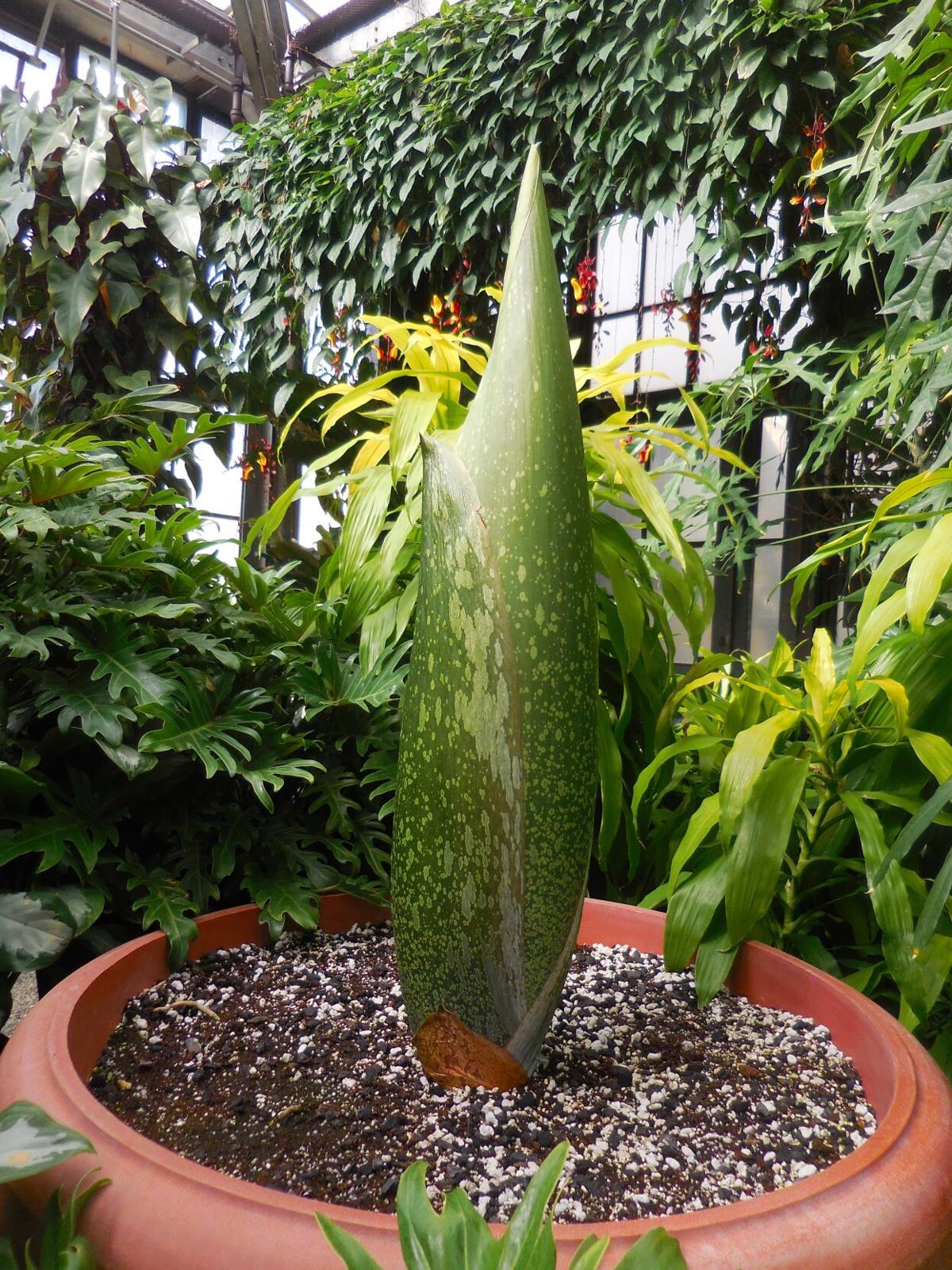 The smell of the titan arum been described as trash that needed to be taken out days ago, Brussels sprouts and because it's 2020, sweaty mask breath.

When Joan and Barry Decker stood before this six-foot-tall corpse flower, they smelled nothing peculiar.

Their three hours waiting in line in the July heat wasn’t for nothing.

“Everything else made up for it,” says Joan Decker, who lives in Lancaster County’s southern end. “As beautiful as it was, with all the problems with COVID, it was such a positive thing that everybody was so excited about.”

This rare plant bloomed this week at Longwood Gardens in Kennett Square, Chester County. To handle the crowds, the site extended hours to 10 p.m. and still sold out over several days. The Deckers were among those who lined up, six feet apart, to see the blooming of the plant kingdom’s largest inflorescence, or cluster of flowers. Unlike many of the corpse flower’s fans, they saw the plant four times.

(Read more about the corpse plant below this time-lapse video.)

The plant known as Sprout started blooming Monday night. The Titan arum “flower,” a frilly maroon spathe wrapped around a tall yellow spadix, usually only last a day or two. By the end of the week, the flower was starting to fade.

Corpse flowers are native to the rainforest in Sumatra. The habitat is shrinking yet botanical gardens cultivate these giant flowers and share pollen to build genetic diversity, says Chicago Botanic Garden.

Even when a garden has a titan arum, it can take years to bloom.

Joan Decker read about the plant and looked for it before the crowds arrived and the livestream started.

She and her husband are members of the garden and usually go at least once a month, as a mini vacation. The garden closed this spring due to COVID-19. The couple were there a few weeks ago on opening day to get out and see the beauty, Joan says. (The Deckers wrote Roll ’Em, a weekly bowling column in the former Sunday News.)

She spotted the corpse flower, which was about three feet tall, skinny and the texture of a snake plant.

“The next time we saw it, it looked like a cob of corn,” she says.

That was the center spike emerging.

After the garden shared news of the rare flowering, Joan bought tickets for Monday and Tuesday. Monday around 2 p.m., the plant had grown to about six feet tall and changed its shape.

“It did look very bulge-y and very pregnant in the middle,” she says.

They stopped again around 5 p.m. and the spathe around the spike was looser.

Rare and smelly corpse flower at Longwood Gardens hasn't bloomed yet; here's a guide to its strange life cycle

Later that night, Joan turned on the livestream and watched the plant open.

The next day, after waiting in line for more than three hours, they had a few minutes with a plant Joan describes as magical and spectacular.

“It sort of looked like an alien,” she says.

The bottom looked like a pleated skirt in velvety maroon. It had grown so quickly in just a few weeks. It’s OK that it didn’t smell.

Every trip to this garden getaway is inspiring, Joan says.

This one wasn’t different.

“I want to buy more plants,” she says.

Here are the restaurants that opened, closed in Lancaster County in November [dining out]

How they pollinate a corpse flower without insects

In the wild, the corpse flower’s scent is key to its survival. The scent attracts pollinators that are drawn to dead animals.

Growing inside a greenhouse has the benefits of a team of experts. But where are those essential pollinators?

Longwood Gardens staff cut a small hole at the base of the plant to pollinate Sprout.

“While easy for flies and beetles to access, hand pollination requires a hole be cut through the spathe,” Gau writes in an email. “Paintbrushes are used to emulate the activity of native pollinators.”

If the pollination works, the flowers inside the spathe will grow “fruit.” In the wild, birds eat the fruit and spread the seeds. In cultivation, the fruit’s harvested and shared to grow the next generation of corpse flowers.

For the past eight years, a dedicated team of community members, led by state Rep. Mike Sturla, spends months planning an event in Lancaster c…

In August, you’ll find more than two dozen events related to gardening and improving your landscape.