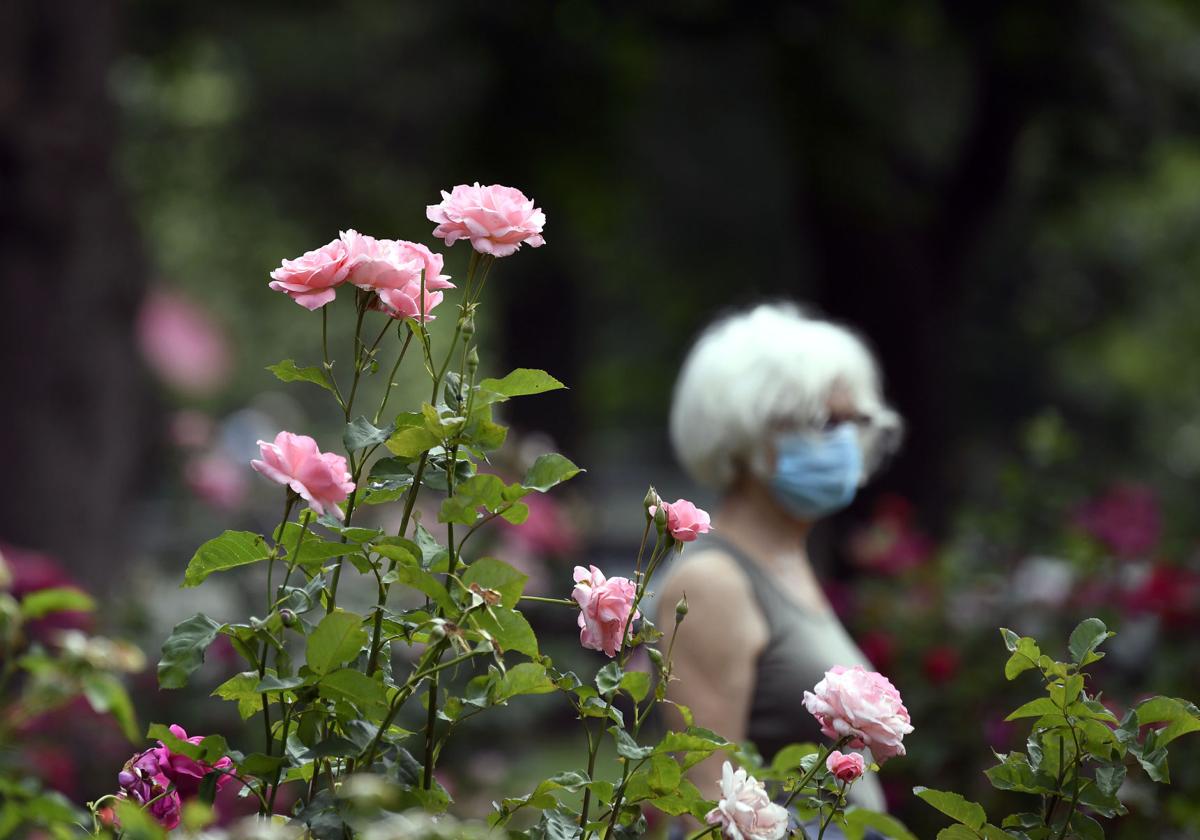 This year, the roses at Buchanan Park had no helpers. COVID-19 kept them socially distant but the volunteer gardeners are back in time for the roses to bloom. 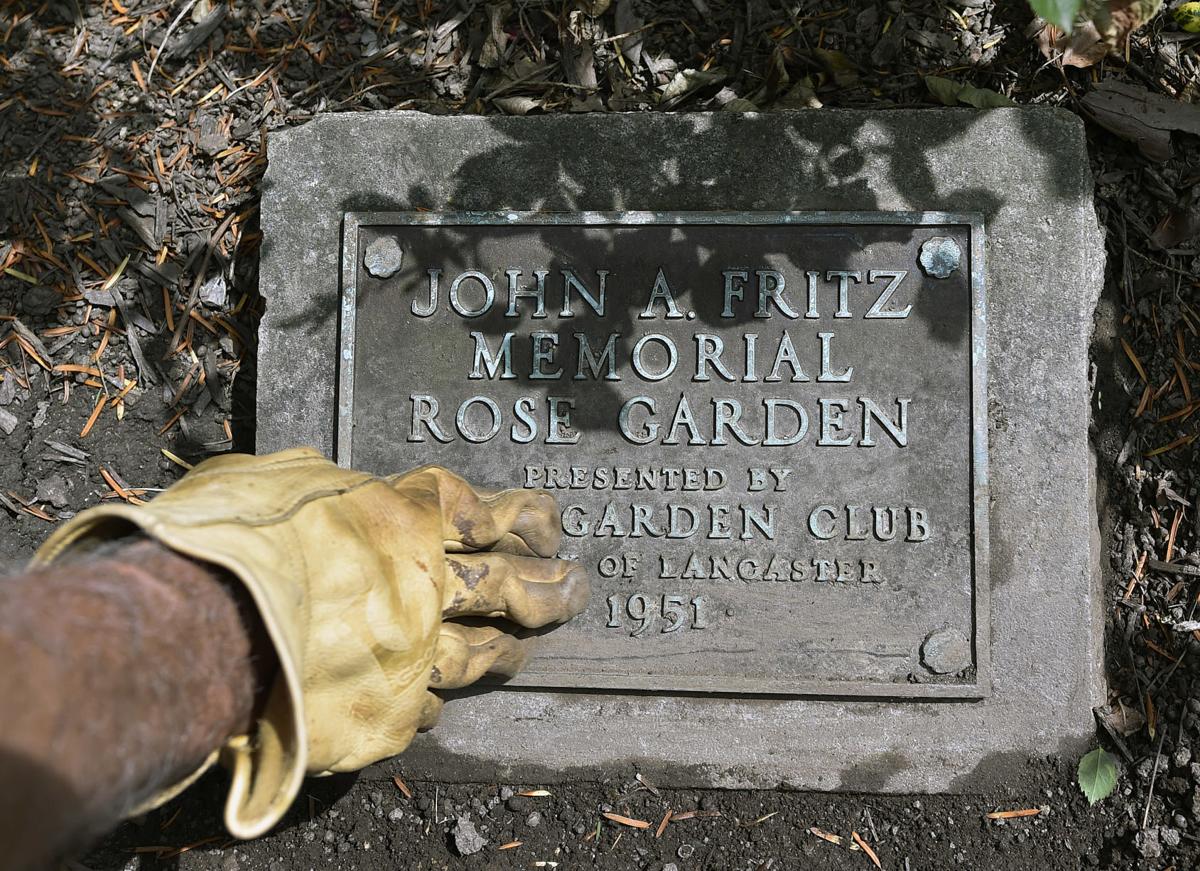 Volunteer Bob Davis, cleans off the John A. Fritz Memorial Rose Garden plaque in the rose garden at Buchanan Park. 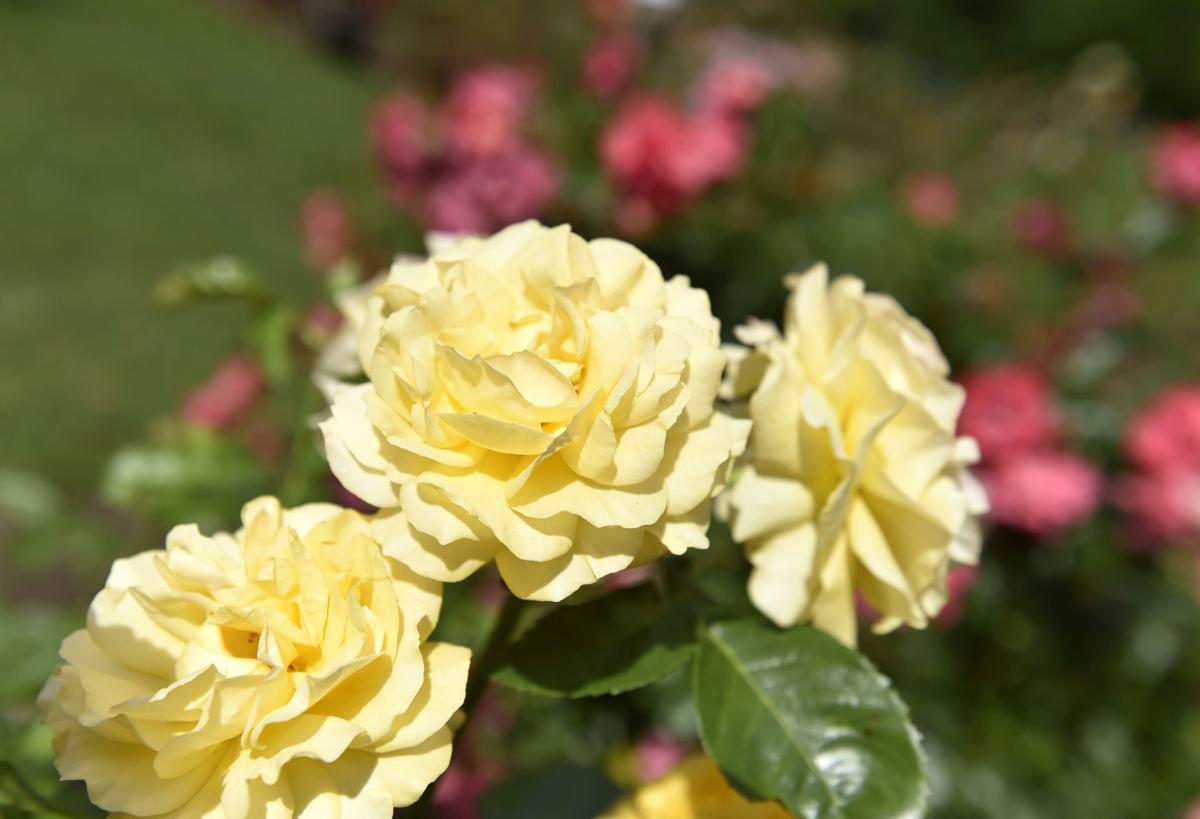 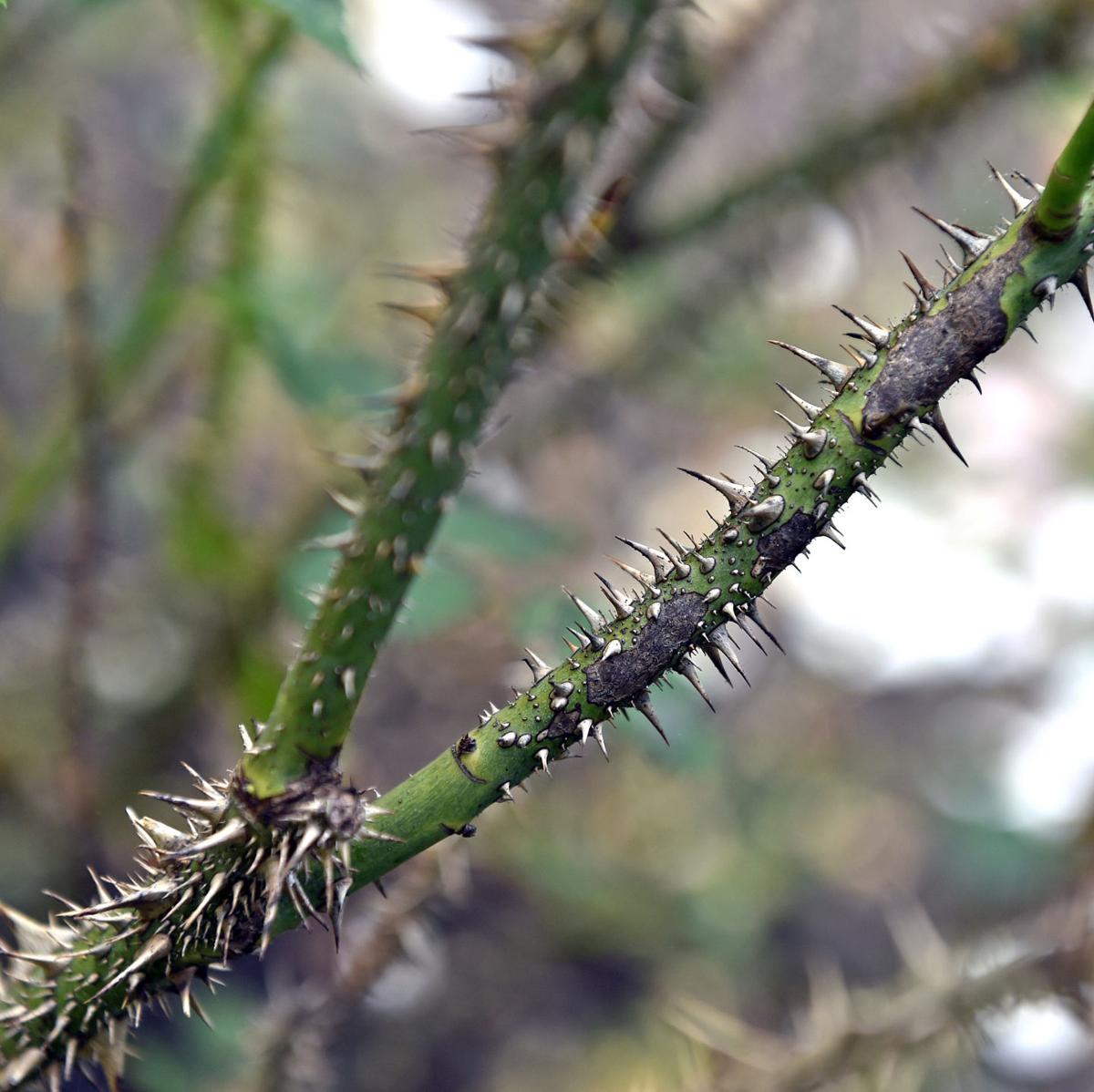 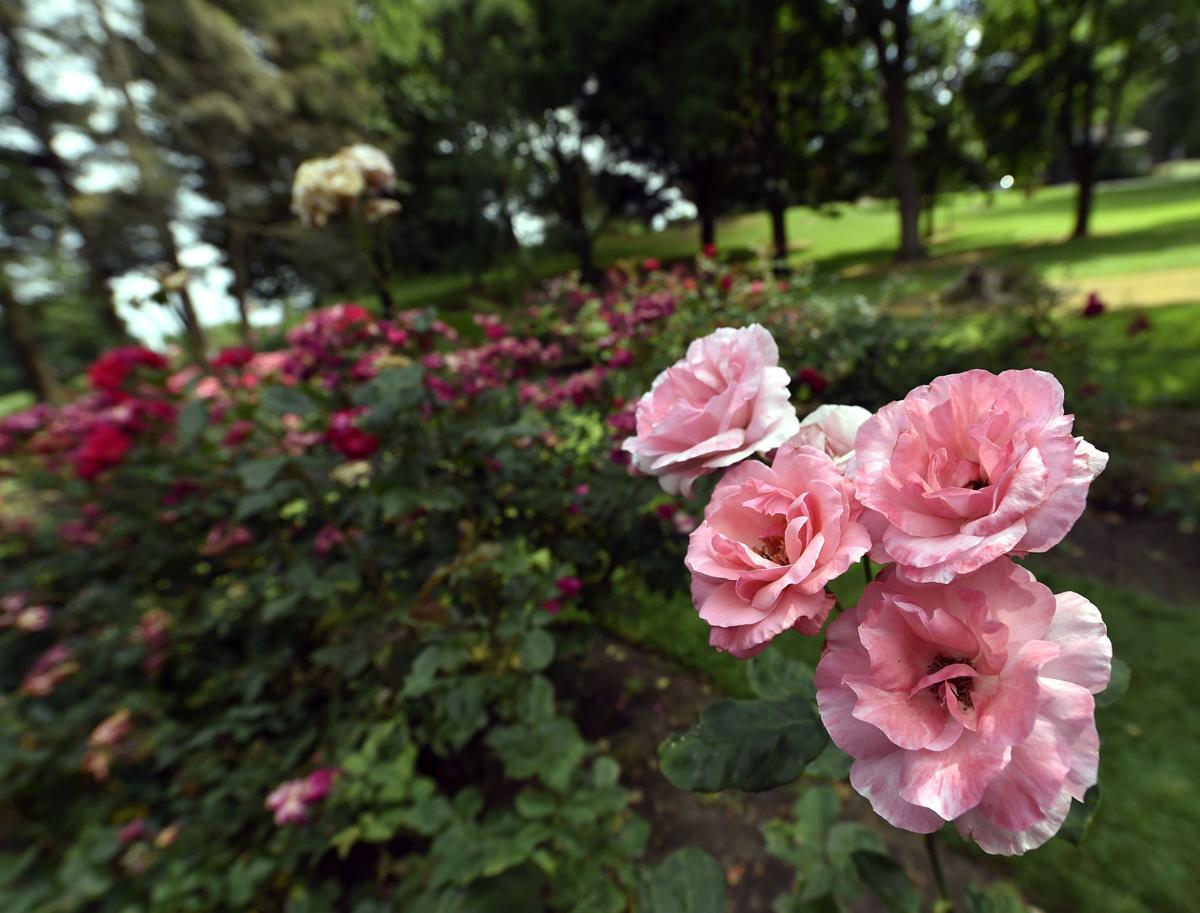 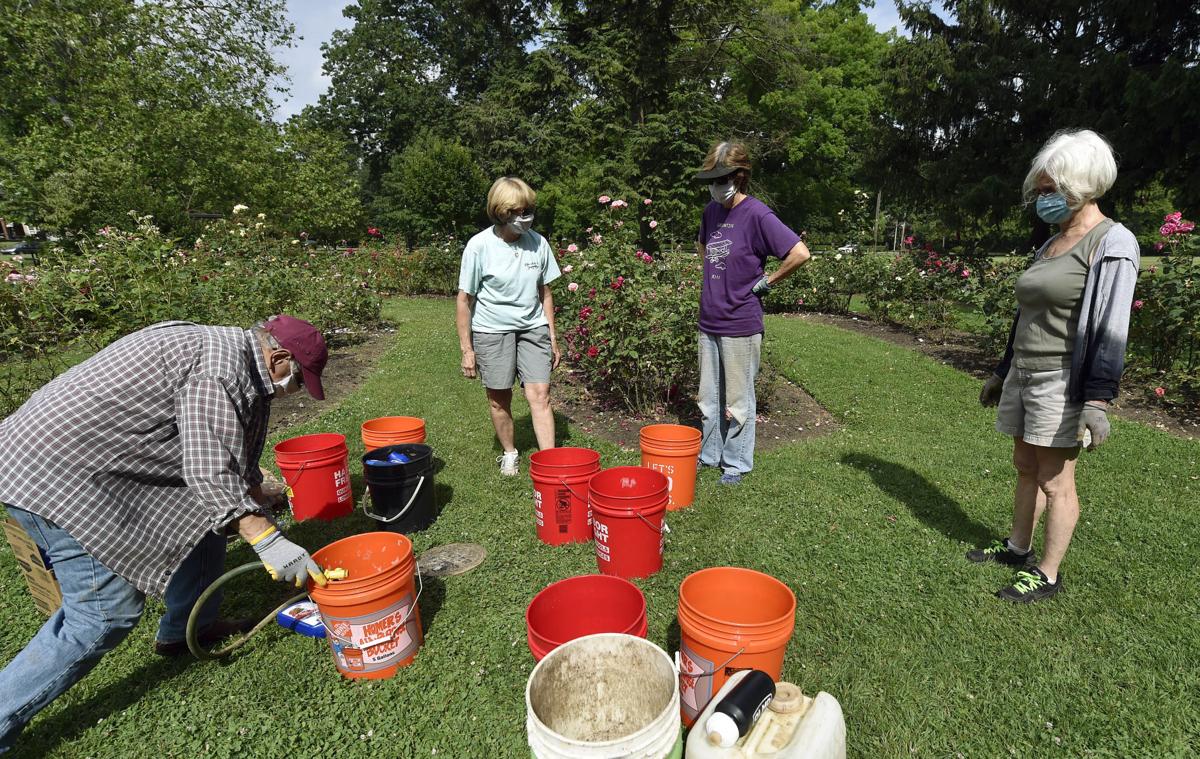 Chairman of the Rose Garden Comittee John Trusz, left, mixes a rose fertiziler and insecticide in the rose garden at Buchanan Park.

The roses of Buchanan Park have helpers, people who start in the winter, pruning the plants down to just a few one-foot tall canes.

The helpers rake the leaves, remove the weeds and fertilize the roses.

For 70 years, they’ve done this work.

Tips for rose success from the experts at Longwood Gardens and Wyck (the oldest rose garden in the U.S.)

This year, the roses had no helpers. COVID-19 kept them socially distant.

Yet right on time, these flowers bloomed on their own, in their space visible from the street but often hidden from our fast-paced lives.

The rose garden in Buchanan Park has varieties that climb high and roses that stay miniature. There are roses that look like white popcorn, roses that smell like fruit and roses the color of ketchup and mustard. It’s open to the public. Admission is free. This year, the volunteers who tend this space had a three-month break, but they’re back with masks.

“We do all of this work and we wonder, ‘Does anybody know?’ ” asks Laura Griffith, one of the helpers. She got an answer last week, when two women stopped to say they had come to the garden as children. Now they were bringing their own daughters for a visit.

From vegetables to roses

The rose garden has its roots in Lancaster’s victory gardens. The idea came from John Fritz, president of the committee that organized hundreds of these victory gardens during World War II. Any money left over after the war should be used for a civic gardening project, he said, according to LNP archives. After his death in 1947, his widow gave $560.77 to the Men’s Garden Club of Lancaster, which Fritz had founded. That’s about $5,000 in today’s dollars.

Roses were a natural choice for a public garden. At the time, the club arranged field trips to rose gardens in the region and later hosted its own rose show, eventually bringing in more than 700 entries.

The group picked Buchanan Park and came up with a design for the 100-square-foot garden: roses planted in semicircle rings with hemlocks framing the background and turf grass paths between the roses.

Are gardens in the Lancaster County region open? Updates on Longwood Gardens and more

The Red Rose City would have plenty of red roses in this garden. The mayor of York donated 25 white roses. Members of the club planted common roses and patented roses like Helen Traubel (a pink blend named after the opera singer). The Donegal chapter of the Daughters donated 25 peace roses in honor of Lt. Robert Ritchey, a Lancaster officer killed in Korea.

By the time the garden was presented to the city in 1952, 668 roses filled the garden beds.

A civic duty with flowers

These days, the garden beds are filled with about 250 roses. They’re tended by volunteers of what’s now known as the Lancaster County Garden Club.

The white roses are gone and the group regularly replaces shrubs that didn’t make it through a tough winter. Since Trusz has taken the lead, he’s made sure each new rose has a name tag. Too many roses in the garden from the past have no tags and are mystery plants.

The city provides mulch and fertilizer and edges the beds. The garden club volunteers plant and maintain the garden. When a new rose is needed, Trusz and others from the club will pick one out at a local garden center. Lately, he looks for roses that smell good.

The rose garden might be missing a few name tags from older roses, but it’s clear there are floribunda roses (with many flowers), tea roses (which date back to the early 19th century), knockout roses (with long-lasting blooms) and more.

Roseanne Rogers points out a few favorites. There’s a deep purple rose and a yellow one called Julia Child.

“It’s quite fragrant,” says Rogers, who can walk to the garden from her Lancaster home. She considers lending a hand in the public rose garden as one way to do her civic duty.

She looks for out Arctic Ice, a lavender rose.

“If we cut this back it might come around by the end of the summer,” she says. “That’s our job, trim them back and hopefully they’ll push out again.”

The work in the garden was delayed by months this year. Now the volunteers are allowed back, they’re catching up with weeding, fertilizing and next up is snipping the dead flowers.

“The first week of June, they were beautiful,” Trusz says. “Now they need work.”

Pandemic or not, the next flush should return on schedule in September into October.

Where and when to pick strawberries in Lancaster County; plus, can I get coronavirus from food?

Here is where and when to pick cherries in Lancaster County

Where to find roses

The rose garden in Buchanan Park is between Race Avenue and Beau’s Dream Dog Park. The garden is open to the public from dawn to dusk and has about 250 roses.

Hershey Gardens reopened June 20 in time for about 3,500 roses in-bloom. Because of COVID-19, visitors are encouraged to buy tickets online ($13.50 for regular admission) at hersheygardens.org. Online tickets will have arrival times to manage capacity. The butterfly atrium is expected to open in early July.

Wyck’s garden and grounds in Philadelphia’s Germantown neighborhood is the oldest rose garden in its original plan in the country. The garden has more than 50 types of historic roses. Admission to the garden is free. The garden is open Thursday-Saturday, noon-4 p.m. Visitors are asked to practice social distancing and wear a face covering.

Our next plant profile will be dahlias. Do you grow dahlias or have a favorite place to admire or buy roses? Contact Erin Negley at enegley@ lnpnews. com or 717-291-8690. You may be part of LNP | LancasterOnline’s garden coverage.

Bailey Shoaf and Sophia Watson, students at Donegal Junior High School, were among the top 10 finalists for junior group documentary at this y…

Antique toolbox: Can you identify what this mystery object was used for?

COVID-19 kept these seniors apart; a post-lockdown garden tour brought them back together

More than a dozen gardeners at Homestead Village showed what they could create in a year when their favorite plant sellers were closed and when some weren’t allowed to leave home because of a global pandemic.