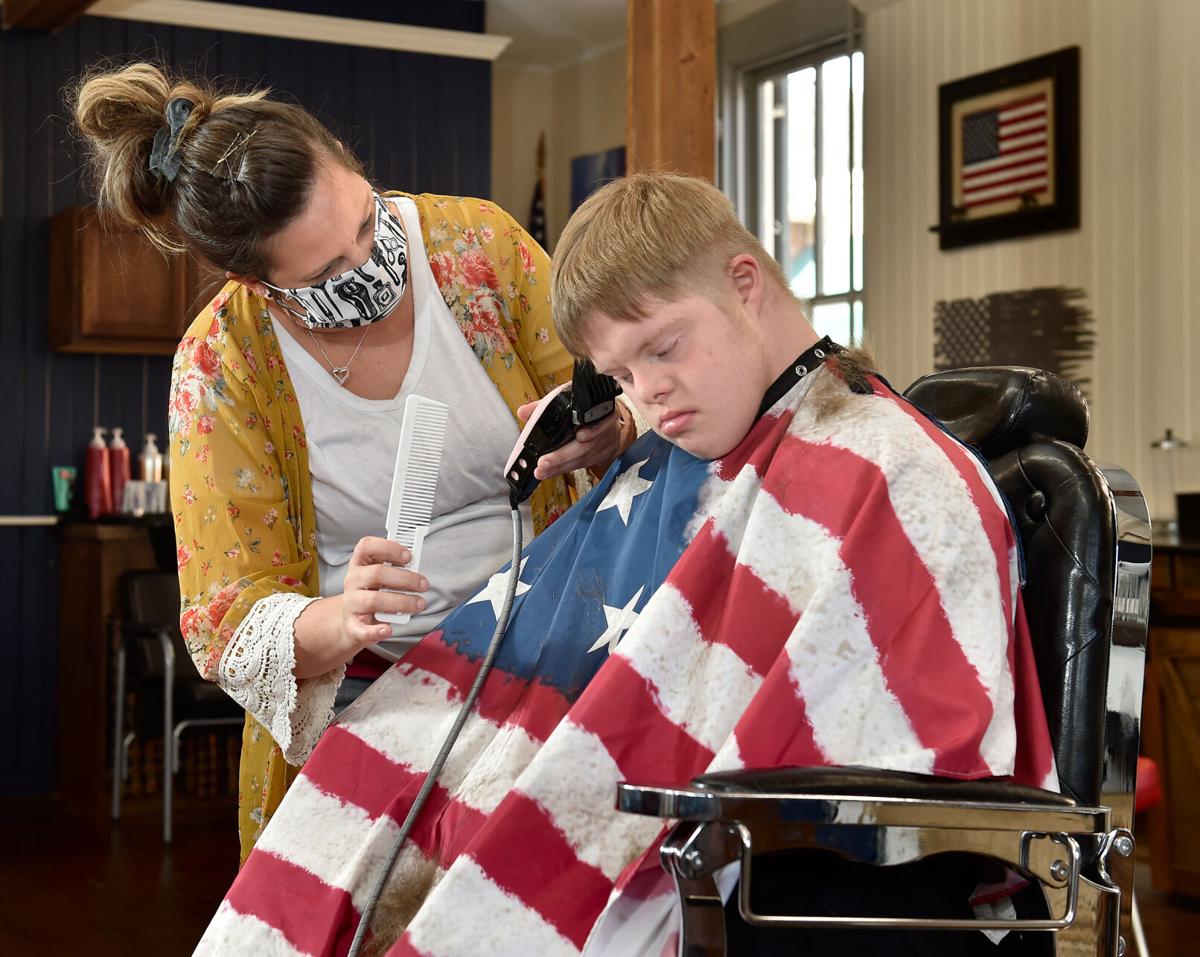 DJ Weaver has his hair cut by Kim Pantano of Shear Fade in Strasburg, where Kim caters to special needs children and adults, who often have a hard time sitting for haircuts on Tuesday, October 20, 2020. 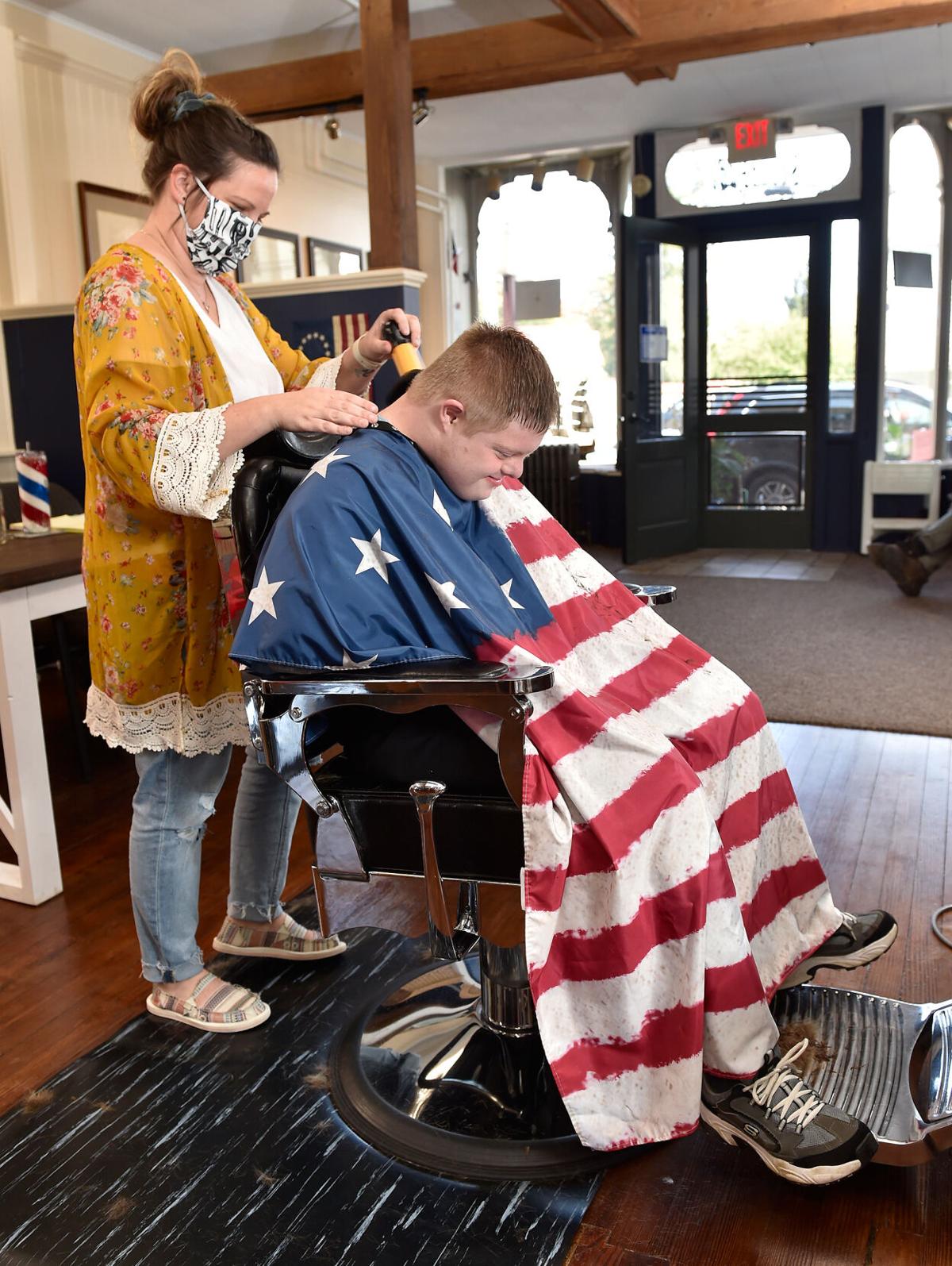 DJ Weaver has his hair cut by Kim Pantano of Shear Fade in Strasburg, where Kim caters to special needs children and adults, who often have a hard time sitting for haircuts on Tuesday, October 20, 2020.

For D.J. Weaver, a 16-year-old with autism and Down syndrome who is mostly nonverbal, a trip to the salon can be overwhelming. Between noises like a whirring blow dryer and the tactile sensations of clippers and scissors, squirts from a water bottle and a tight cape around his neck, a haircut can trigger a sensory overload.

“He was nervous. He was way out of his element,” says Pantano, owner of Shear Fade in Strasburg. “I talked him through it. I’d say 90% of the haircut he sat on the floor. And I was sitting on the floor with him.”

Until his appointment with Pantano, D.J.’s mother, Linda, was handling all of the haircuts.

“It would take hours to get this accomplished,” says Dave Weaver, D.J.’s father. “He’d be screaming and crying and carrying on and all of that.”

Weaver says they tried taking D.J. to a salon before, but without any success.

“Haircuts were a major problem,” Weaver says. “We tried taking him to different salons and the environment with too much going on, he’d freak out. He’d get one foot inside the door and you couldn’t move him.”

But with Pantano, D.J.’s reaction was different.

“She just has a connection with him,” Weaver says. “It feels good after struggling for so long trying to get his haircut.”

D.J. has been back to Shear Fade around a dozen times for haircuts.

“Now he literally comes in, sits in my chair, says ‘haircut,’ ” Pantano says. “I cut his hair and he’s in and out in 20 minutes. It’s huge progress.”

Weaver acknowledges that every person with special needs is different and responds differently to people, but in his opinion, an appointment with Pantano at Shear Fade is “worth a try.”

“Kim has that personality that is easy to connect with,” Weaver says. “We really appreciate her.”

Pantano, of Millersville, opened Shear Fade in Strasburg in late August. The shop occupies the former space of New Creations Hair Salon, which relocated less than a block away. She’d been in the cosmetology industry for 13 years, but decided it was time to open her own salon.

Before opening Shear Fade, Pantano, 30, was juggling a job as a teacher assistant in the special education department of Lampeter-Strasburg School District as well as cutting and styling hair on the side.

She worked as a special needs teacher assistant at Martin Meylin Middle School for four years and spent her last year working at Lampeter-Strasburg High School, her alma mater.

“I fell in love with special needs kids, and I grew to have a soft spot in my heart for them,” Pantano says. “I keep in touch with most of my students — mostly their parents that are like ‘I need a haircut!’ ”

Pantano says she wanted to figure out a way to combine her love of styling hair and working with people with special needs, but wasn’t sure how. Parents of her students would regularly approach her and ask if she knew a salon that could cater to special needs children.

“That gave me the idea,” Pantano says. “I wanted to reach out and cater to special needs because everybody needs their hair cut.”

Shear Fade is open to the public and Pantano can cut both men’s and women’s hair, but she wants people with special needs to know that she’ll cater to them, too.

“A lot of stylists, when they see special needs, they don’t know how that person is going to act, so they get tensed and kids can feel that,” Pantano says. “That puts the kids in a bad situation. So just working around the kids and knowing what sets a special needs kid off ... helps ease the parent’s mind a little.”

In fact, Pantano typically likes to schedule a meet-and-greet appointment with special needs clients. This way the client can get to know her and become acclimated to the salon environment. Sometimes the meet-and-greet ends in a successful haircut, and sometimes it doesn’t. And that’s OK by her.

“If I’m not successful, I usually don’t charge them. If I’m not cutting them, I’m not charging them,” Pantano says. “I usually book out a good hour for them because I don’t know how it’s going to be. I’ve got a TV in here. I’ve got stuffed animals, electronics, iPads. I got it.”

Pantano’s approach varies for each of her special needs clients, but she says it’s all about making them comfortable.

According to Pathways.org, an online resources guide dedicated to early child development, there are a few ways to make haircuts more comfortable for children, such as allowing the child to touch the tools or even letting the child make the first snip with the scissors.

“I let them hold the clippers,” Pantano says.

Pathways.org stresses that making a barber aware of a child’s sensitivities to sound and sensations can make for a better experience.

“You have to do what’s comfortable for the kid or the adult,” Pantano says. “For instance, when it comes to clipper cutting, I show them that it’s not going to hurt you. When a kid with special needs hears the word ‘cut,’ they instantly think it’s bad. So you have to approach it a different way. So I say ‘trim’ or ‘I’m going to style your hair today.’ ”

Pantano says she likes to meet her clients in their element and not make them come to her element. And she constantly makes her clients feel reassured.

“I show them what I’m going to do as far as like changing out the guards (on the clippers). Then when it comes to trimming around the ears, I’m like ‘This tickles’ or ‘This feels good,’ ” Pantano says. “I tell them ‘I’m here to make you feel good about yourself.’ ”

Now, Weaver says when his son D.J. hears the word “haircut,” he doesn’t have a negative reaction.

The chill of winter can be a very frightening thought when you don’t have a reliable source of heat. Because of this, Ranck Plumbing, Heating …

The American Red Cross is once again calling for blood donors to ensure a strong supply heading into flu season during the COVID-19 pandemic.