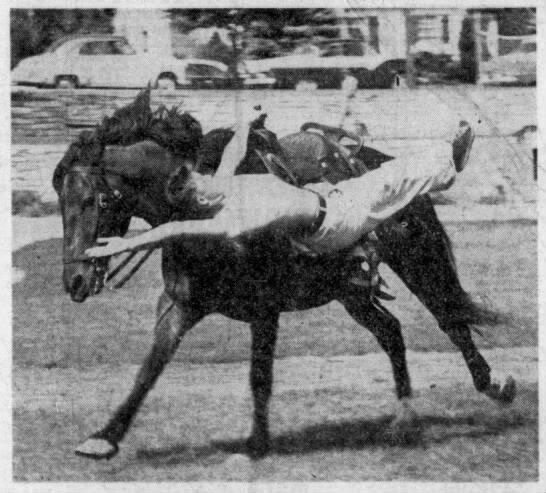 Pvt. John Sabric performs some trick riding on a horse named Scholar during a rehearsal for the State Police Rodeo in Hershey in September 1955. This photo ran in the Sept. 11, 1955 Sunday News.

Pennsylvania State Police Rodeo riders open the show at the September 1955 rodeo in Hershey. This photo ran in the Sept. 11, 1955 Sunday News. 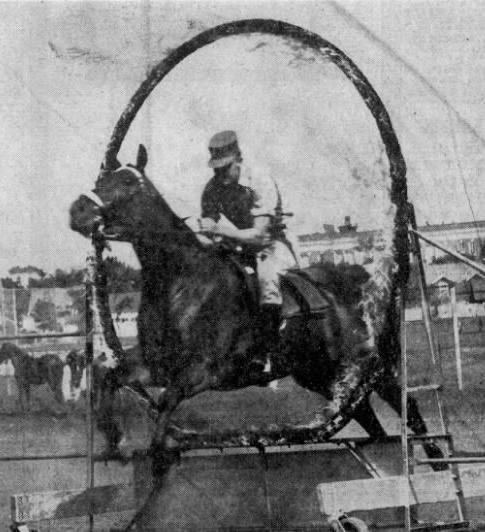 Pvt. A. Horvath jumps his horse through hoops during rehearsals for the State Police Rodeo in Hershey in September 1955. This photo ran in the Sept. 11, 1955 Sunday News.

Way back in the early 1960s, I was 12 years old and my father took our family to a wonderful event each year in Hershey.

It was always held around the Fourth of July, and this event actually shaped my life.

The Pennsylvania State Police Rodeo was held in the old Hershey outdoor stadium, and it was a big deal to residents who attended. The parking lots were jammed, and the stadium was filled to capacity.

The state police troopers would entertain us with an amazing program. The program would start with the national anthem, and a line of horses with state troopers holding flags would enter the stadium.

After the national anthem, an old Ford car drove into the stadium, filled with clowns. The car was modified so it was very light in the front end, and all the clowns were seated in the rear.

The car stopped and then jerked to a start. The car would do a giant “wheelie” and stay on its rear wheels for a while as the car accelerated. The crowd went wild.

Next, the stadium rumbled as a dozen state police motorcycles entered the arena. The big Harleys were maroon in color, and all were polished to perfection.

The riders rode in many different formations that ended in a huge figure eight.

When the cycles crisscrossed in the middle of the “eight,” they just missed each other. The cycles were moving pretty fast, and I just knew that there was going to be a collision!

Next, they told us they were going to put 13 troopers on one cycle. It seemed impossible, but, one by one, they added more troopers. When they were finished, the lone cycle drove around the entire arena with troopers jammed all over it!

In order for everyone to see if they hit their targets, they fired at colored balloons. They started firing at close distance and gradually increased the distance to the balloons.

The grand finale was really cool. One by one, they released helium balloons and one lone trooper stood in the center of the arena and shot the balloons as they rose into the air. With each shot, he let the next balloon go a little higher before he shot it.

Then, as the grand finale, he allowed the last balloon to float so high that it was a small dot in the sky. He took careful aim and fired. When he shot the balloon, that really impressed me.

The wonderful show ended with a glorious fireworks display.

This yearly event did shape my future. My brother and I were both drafted into the Army in the ’70s and after the Army, both of us became police officers.

Fast forward to April 1978. I was hired by a local police department and was assigned to take my police officer training at the State Police Municipal Academy in Hershey.

While in the academy, I had a wonderful firearms instructor who taught us pistol shooting.

My department issued me a brand new .38-caliber pistol, and I was having difficulty with my shots being consistently right of center.

The shooting instructor, an older man about 65 years old, was nearby, and I asked him to check my sights. I had a decent pattern, but it was always slightly to the right of the bull’s-eye.

Sgt. Gesford took my new weapon, loaded it and turned the gun upside down, pointing at my target. He fired several shots, each perfectly hitting the bullseye.

The sergeant looked at me and said, “Nothing wrong with those sights my boy.” I was stunned at how accurate he was while holding my gun upside down!

About a month later on the shooting range, I was talking to him and mentioned the old State Police Rodeo held each year. His eyes lit up, and he began to tell me stories about the rodeo.

I told him what I remembered about the shooting demonstration, and he began smiling.

I said, “I remember you guys shooting at helium balloons high above the stadium.”

Sgt. Gesford smiled and said, “That was me.” I asked him, “How on Earth did you hit those balloons so high in the sky?”

His eyes squinted as he smiled.

“Well, to tell the truth, it would not be safe to shoot real bullets straight up in the sky above the stadium,” he said. “Don’t tell anyone, but I was using birdshot. It gave me a better chance with those very high balloons, and the tiny shot posed no danger to anyone in the grandstands.”

That dear man taught me well.

In 33 years of being a police officer, I never had trouble qualifying each year with my handgun.

Oh, and don’t you tell anyone about the birdshot.

The author lives in East Petersburg.

Quest for Learning, the Lancaster-based continuing education program, is putting its six-week fall courses online, at no cost, starting Thursd…