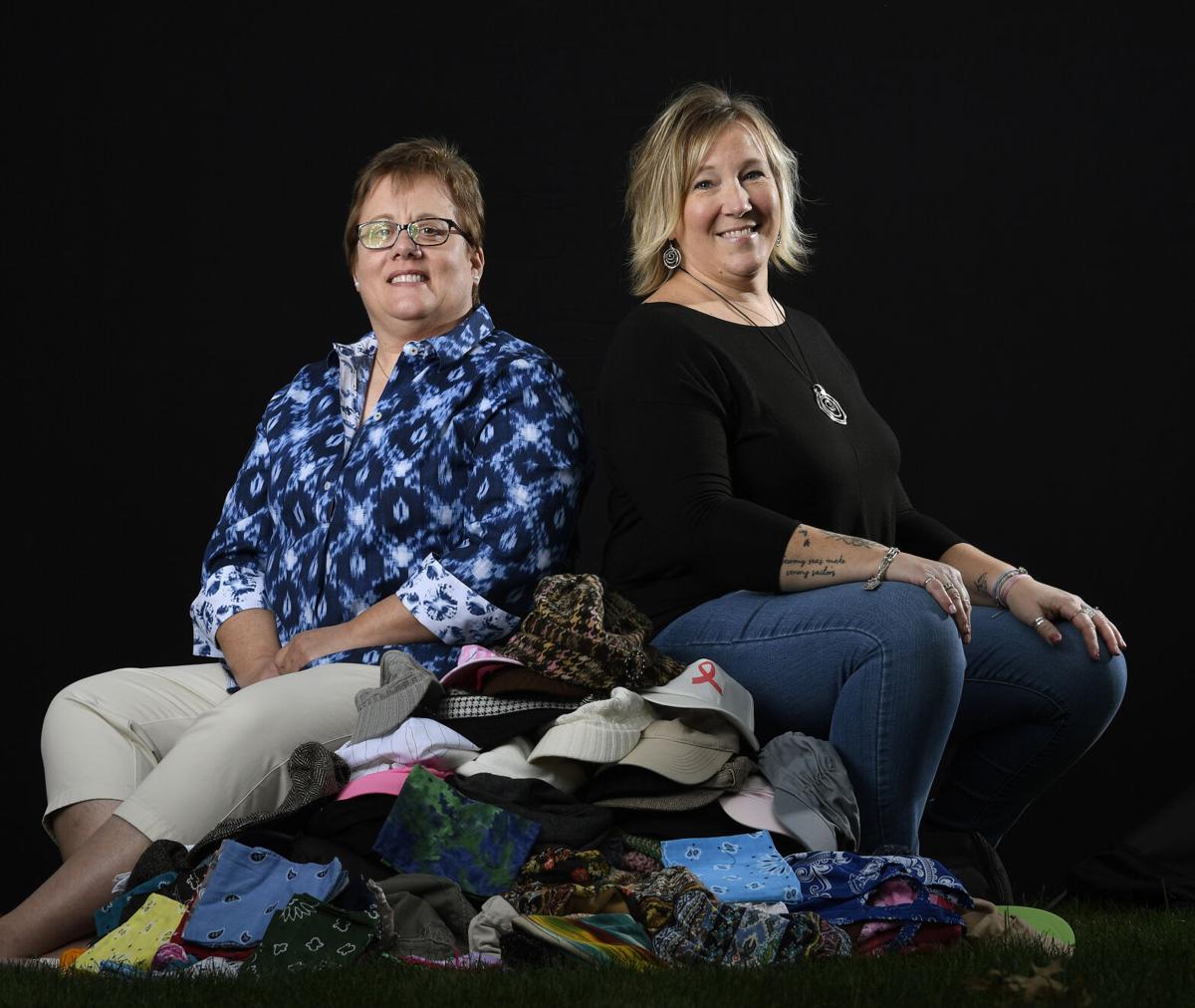 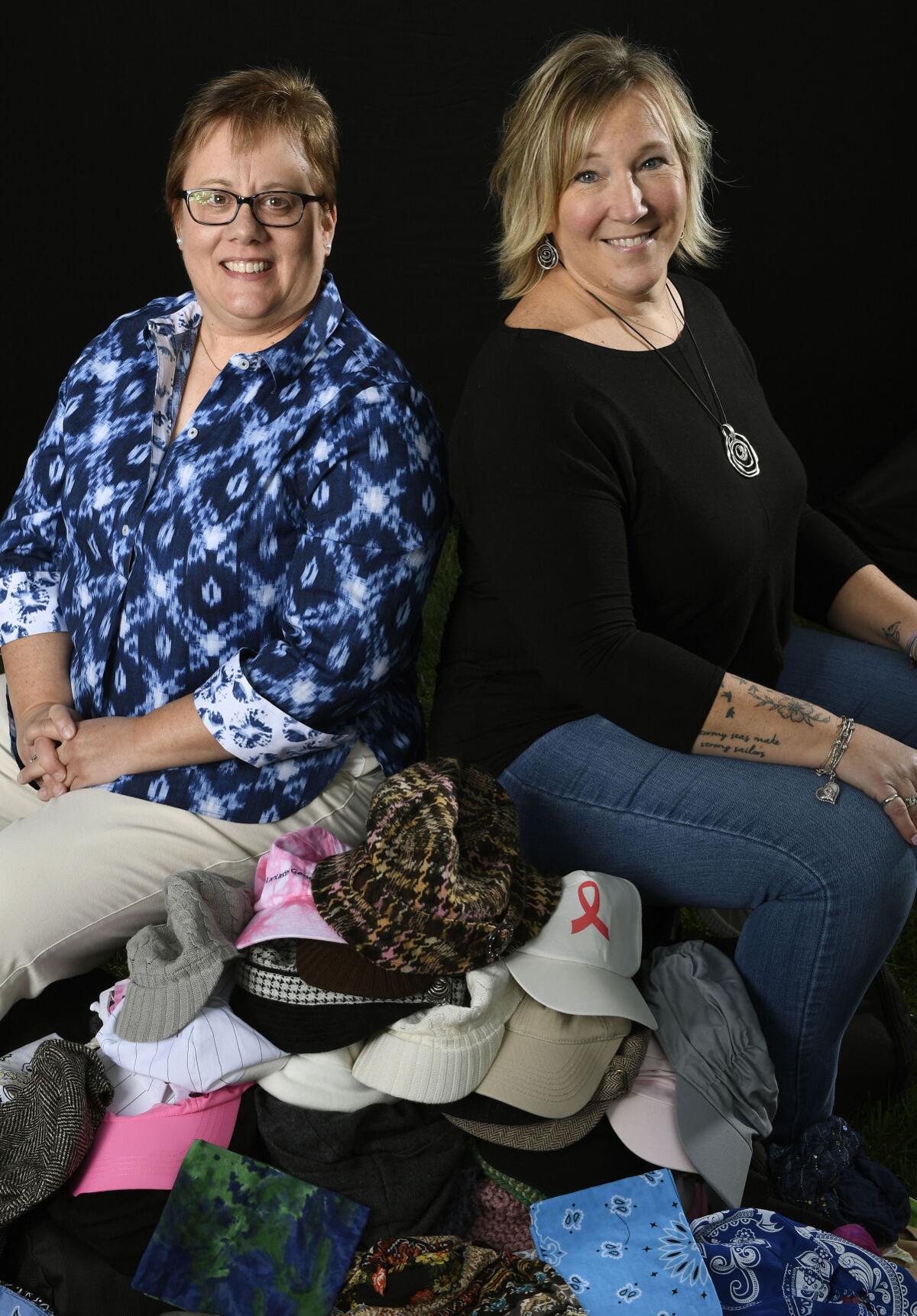 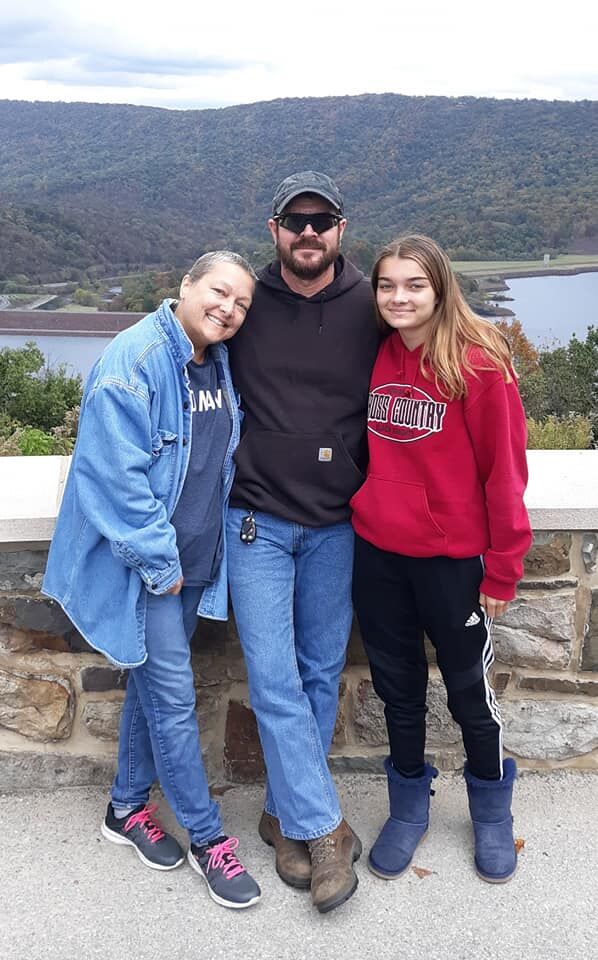 April Good’s straight, blonde hair fell out less than two weeks after her first round of chemotherapy in 2010.

Good, a 1989 Warwick High School graduate and Manheim Township resident, went to A.C. Moore, looking for something to cover her head as she continued her battle with breast cancer.

“I bought a bunch of bandanas and wore them like a pirate on my head,” Good said. “Then some friends bought me bandanas and hats, and scarves.”

By the time Good’s hair began growing back in 2011, her friend Lisa Rosenberger of West Donegal Township was diagnosed with breast cancer.

“I was in tears,” Rosenberger said of trying on wigs after her hair fell out.

She called a friend, Monica Long -- the sister of April Good.

“My sister has a bag of hats,” Long said. “We’re coming over there.”

Thus began what Good now refers to as the “traveling bag of hats.”

Over the past nine years, the “traveling bag of hats” has helped six women who have lost their hair while battling  cancer. Four of those women had breast cancer, one had Hodgkin’s lymphoma and one had ovarian cancer. All but one are alive.

October is Breast Cancer Awareness Month, celebrated in countries across the globe to increase attention and awareness for early detection and treatment of the disease. Breast cancer is the most common cancer in women worldwide, according to the World Health Organization. It’s the second most common among American women after skin cancer, according to the Centers for Disease Prevention and Control.

“I did not want to lose my hair,” Rosenberger said. “I had great hair. Really long. I have natural, wavy hair.”

The American Cancer Society provides free wigs for adult women who financially qualify, but some women might prefer not to wear a wig.

“I did not like the way they looked,” Nancy Beauregard of Manheim Township said. “I was like, ‘You know what, I don’t want to wear a wig. I’ll wear hats instead.’”

Beauregard, a 56-year-old mother of three kids, was the second woman to receive the “traveling bag of hats” when her light brown hair fell out over the course of treatment for stage 2A triple-negative breast cancer in 2014. Beauregard knew Good through church.

“Me and April, and one of her daughters and one of my daughters, we all went together one day to the mall,” Beauregard said. “I probably got like four hats that I thought were cool-looking. I’d wear those, and I also wore the ones April gave me. And bandanas and scarves.”

Beauregard added her hats to the collection and passed it along to Sally Longenderfer, a Hempfield alum and Lititz resident who was 49 when her “shoulder-length brownish, blondish hair” fell out in 2015 during treatment for stage 2 estrogen/progesterone HER2-negative breast cancer. Longenderfer also knew Good through church.

“I bought a scarf; I liked that one,” Longenderfer said. “I remember that made me feel like a 1950s movie star, with a scarf and sunglasses. … I liked hats and scarves. I could wear it with a lot of different things.”

In 2016, the bag went to 48-year-old Jill Segro, a Hempfield alum and Mount Joy resident who lost her shoulder-length blonde hair when fighting triple-negative breast cancer.

In 2017, it went to Eva Salembier, whose long, brown curly hair fell out from treatment for stage 2A Hodgkin’s lymphoma in her final two years as a Manheim Township High School student.

In the first half of 2019, the bag went to Montgomery County resident Janet Fransham, whose brown, chin-length hair came out shortly after beginning treatment for ovarian cancer.

In June 2019, the collection returned to Segro, who had been battling breast cancer a second time. Segro died Dec. 19, 2019, at 51 years old. She left behind a husband and their teenage daughter. She was preceded in death by four miscarriages.

What are the symptoms?

Some people have no symptoms at all, according to the CDC. But symptoms can include:

Several of the women who used the “bag of hats” during their cancer journeys said their favorite head coverings were those of neutral colors, because they generally matched any outfit.

“All of hers were extremely colorful,” Callie Segro said.

Callie Segro is a Hempfield sophomore and the daughter of Jill and Steven Segro, who had celebrated their 28th year of marriage in July 2019.

“Her hats were the really bright, flowery kind,” Callie Segro said of her mom. “One was pink with yellow flowers. She had a green one, too. Just a bunch of different colors.”

“She was very bright,” Callie Segro said. “She was always cheery.”

“She was just very silly,” Good said. “She laughed a lot. She just always seemed very happy, even when things were tough.”

It should be noted here some of the hats that were previously part of the collection instead touched the lives of two other women who were fighting cancer before dying months apart from each other. Beauregard gave some to a friend, Nicole Bomberger, a Mount Joy native and married mother of two daughters who was 38 when she died July 7, 2017. And Rosenberger provided some to Cecilia “Monica” Cisneros, an Elizabethtown resident originally from Ecuador and married mother of three adult children who was 53 when she died Oct. 22, 2017.

Why do cancer patients lose their hair?

The collection is now back in Good’s possession for the time being, waiting to be passed along to the next person in need.

The “traveling bag of hats” has actually now grown to three large separate bags containing about 150 items in all, made up of hats, scarves, bandanas, knitted caps and ski caps in a variety of colors and sizes.

It’s beyond what Good could have imagined when she first passed along the original head coverings she first used 10 years ago.

“Just the fact that when I started all this myself, I didn’t have anybody who was going through the same thing,” Good said. “I didn’t know what I was doing.”

“It was such a Godsend when you’re dealing with everything else,” Fransham said.

“It wasn’t about the hats,” Longenderfer said. “ I can go buy hats. For me, it’s knowing somebody else went through something and is doing something kind for you.”

“I’ll always remember that kindness and love and connection,” Rosenberger said. “Having cancer, it’s a club you don’t ever want to be a part of, but once you’re a part of it, you’re family.”

Nearly 17 years ago, on Jan. 18, 2004, Matt and Noel Johns were in their fifth year of marriage when they became first-time parents. Two days …

What’s the most common form of breast cancer?

Invasive ductal carcinoma is the most common form of breast cancer, representing about 80 percent of all breast cancer diagnoses, according to Johns Hopkins. It begins when a milk duct invades the tissue of the breast outside of the duct.