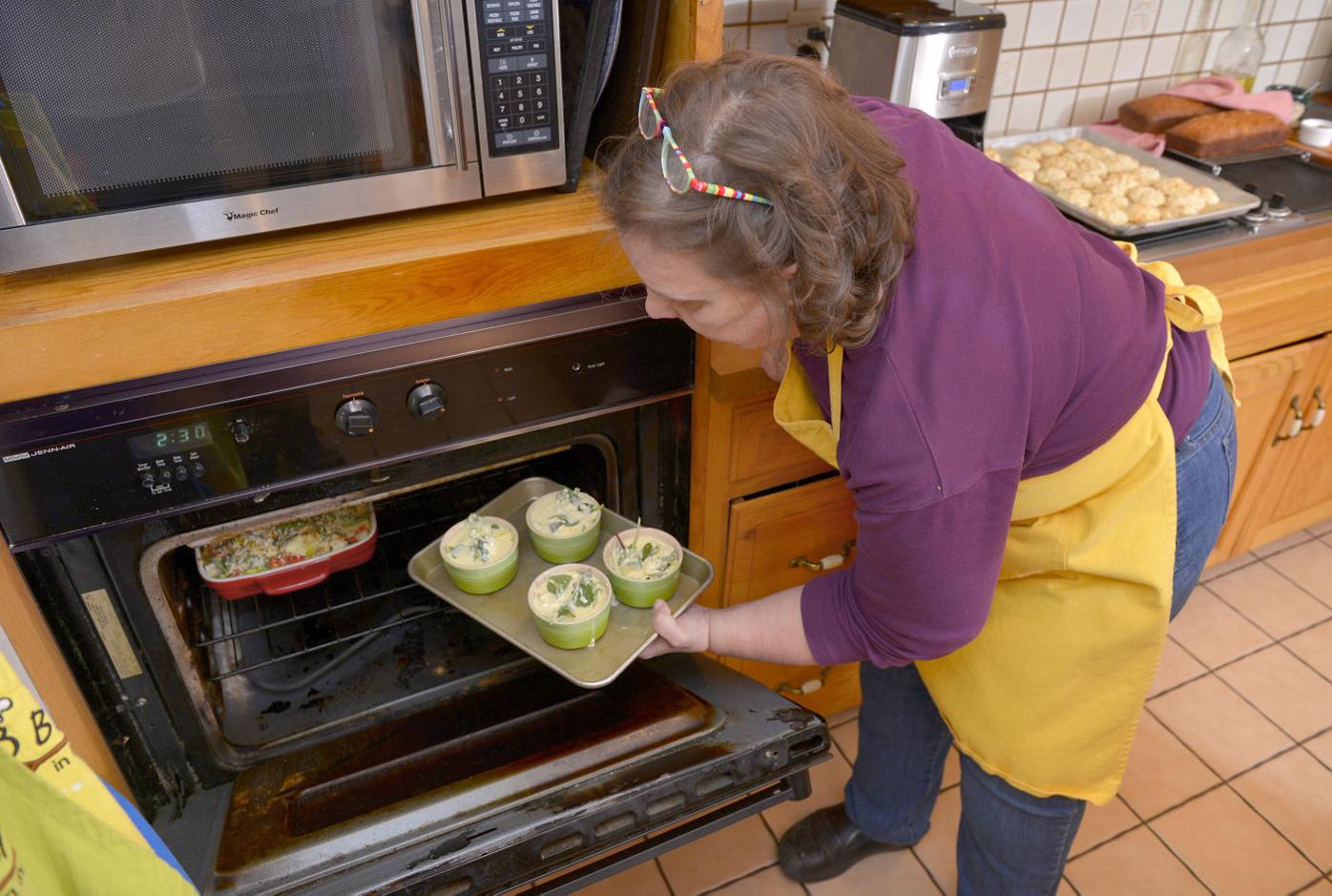 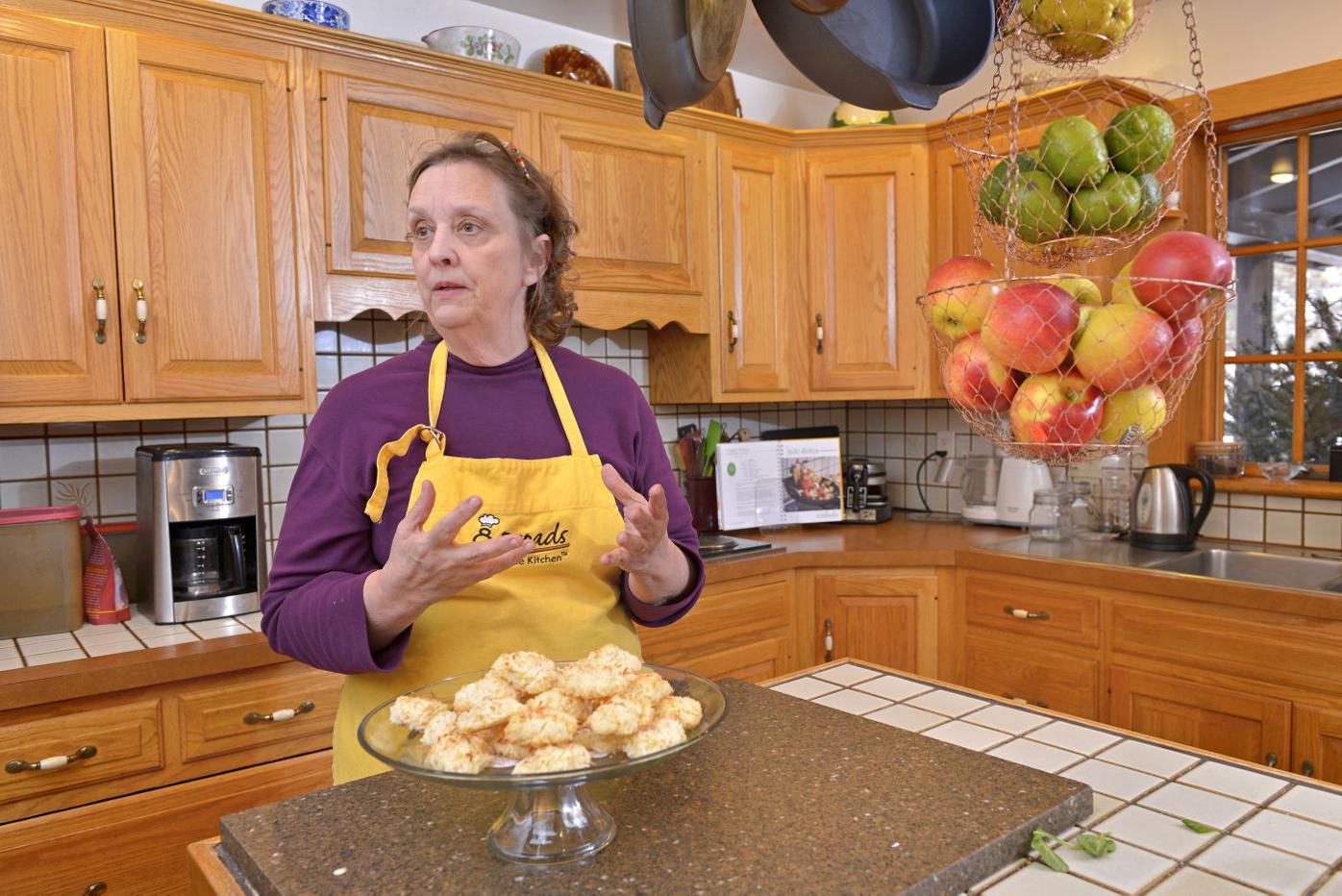 Debbie Mosimann stands in her kitchen at Swiss Woods Bed and Breakfast Inn, north of Lititz, with a fresh-from-the-oven plate of Coconut Macaroons. 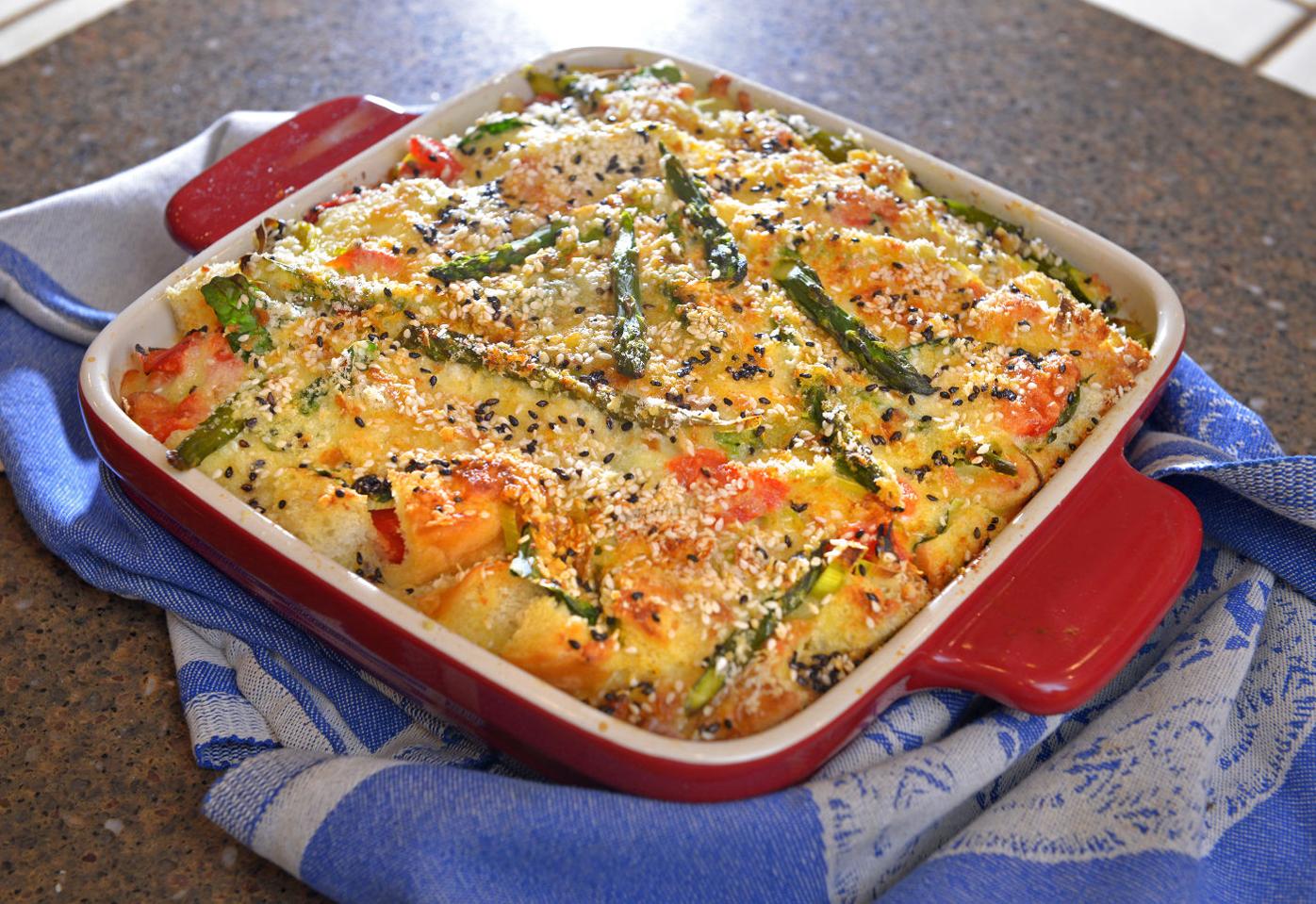 Debbie Mosimann's Spring Strata is fresh out of the oven at Swiss Woods. 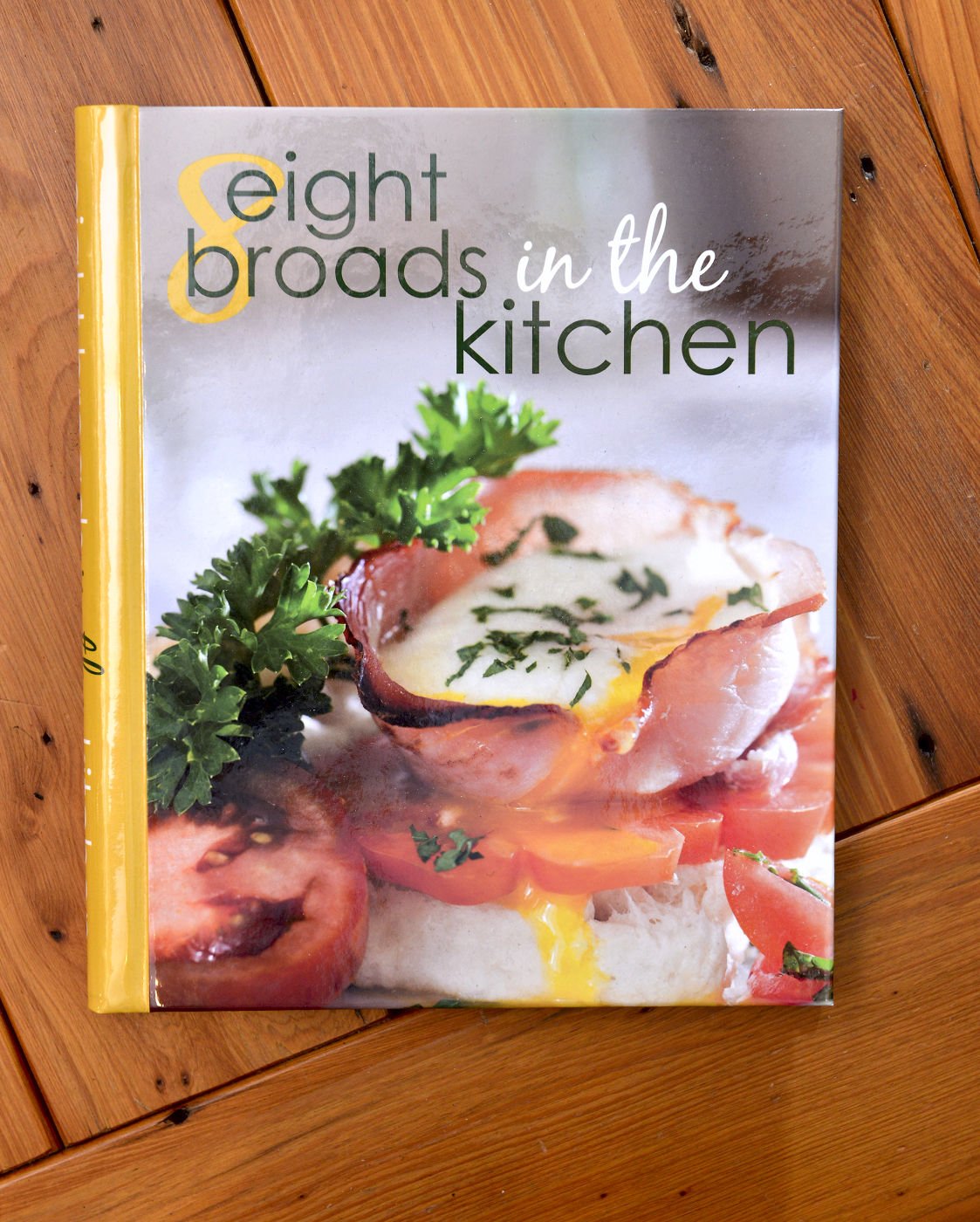 A group of women innkeepers, who call themselves Eight Broads in the Kitchen, have published their first cookbook. 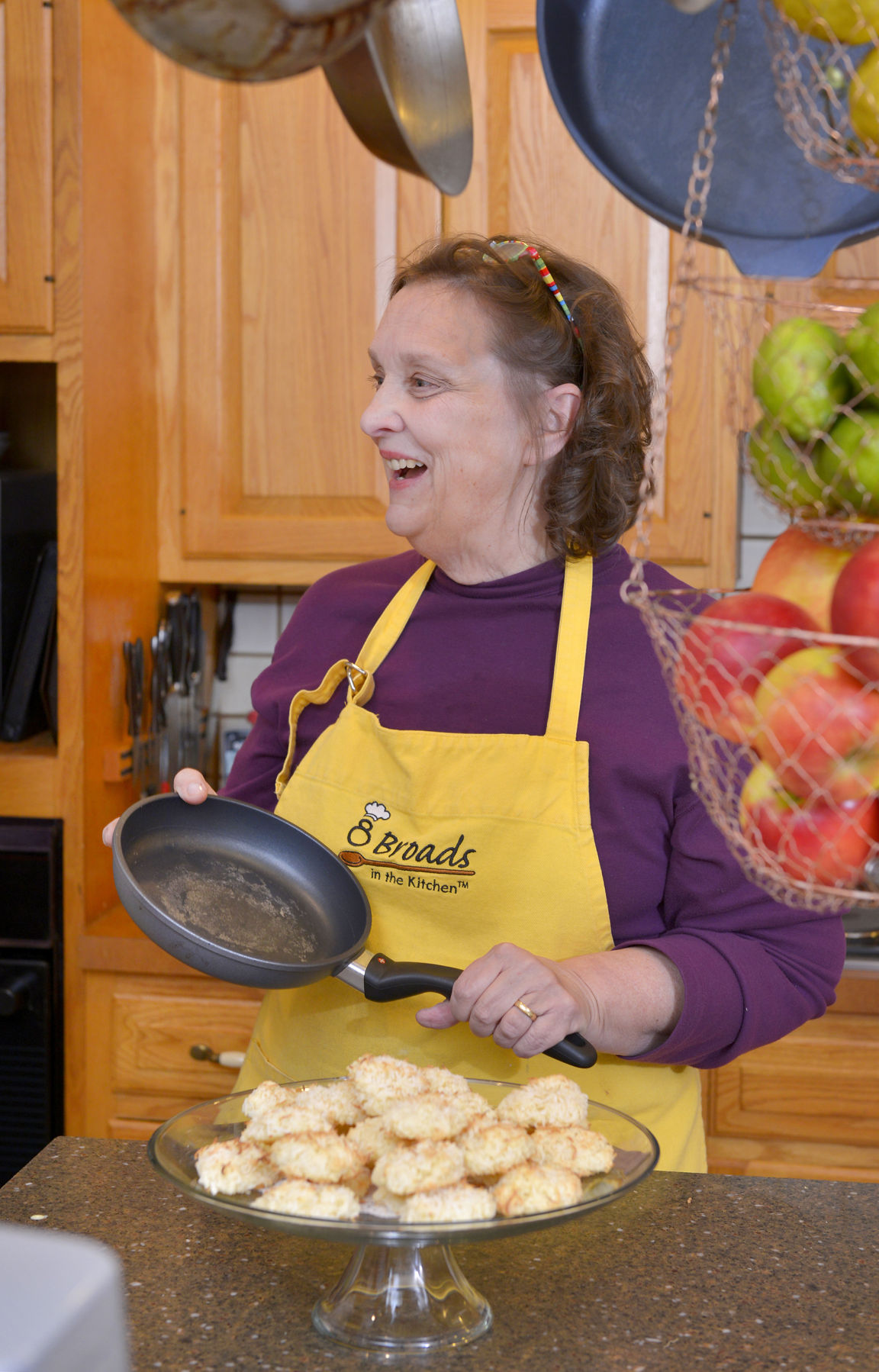 Debbie Mosimann talks about her Swiss Diamond cookware in her kitchen at Swiss Woods Bed and Breakfast north of Lititz. 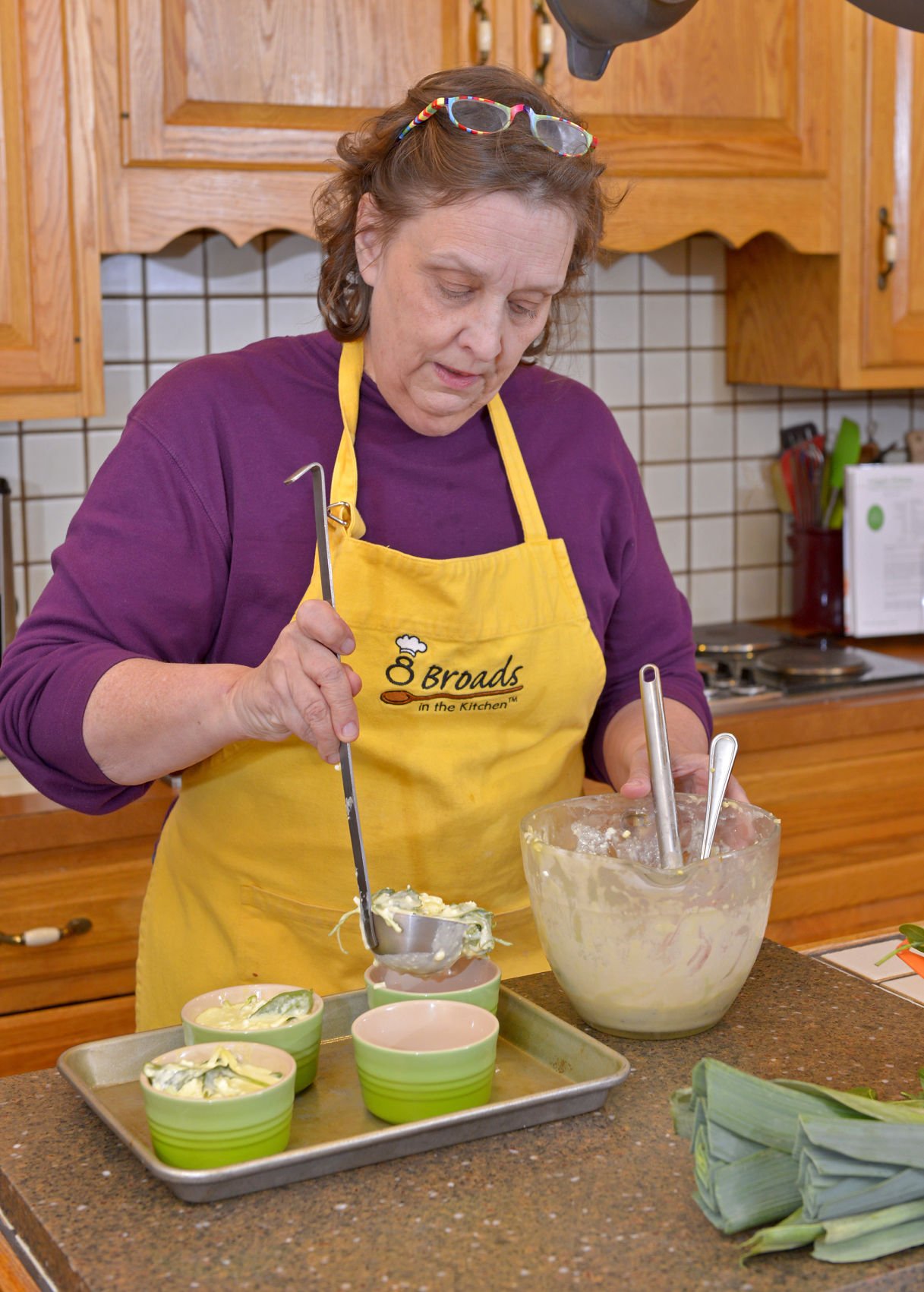 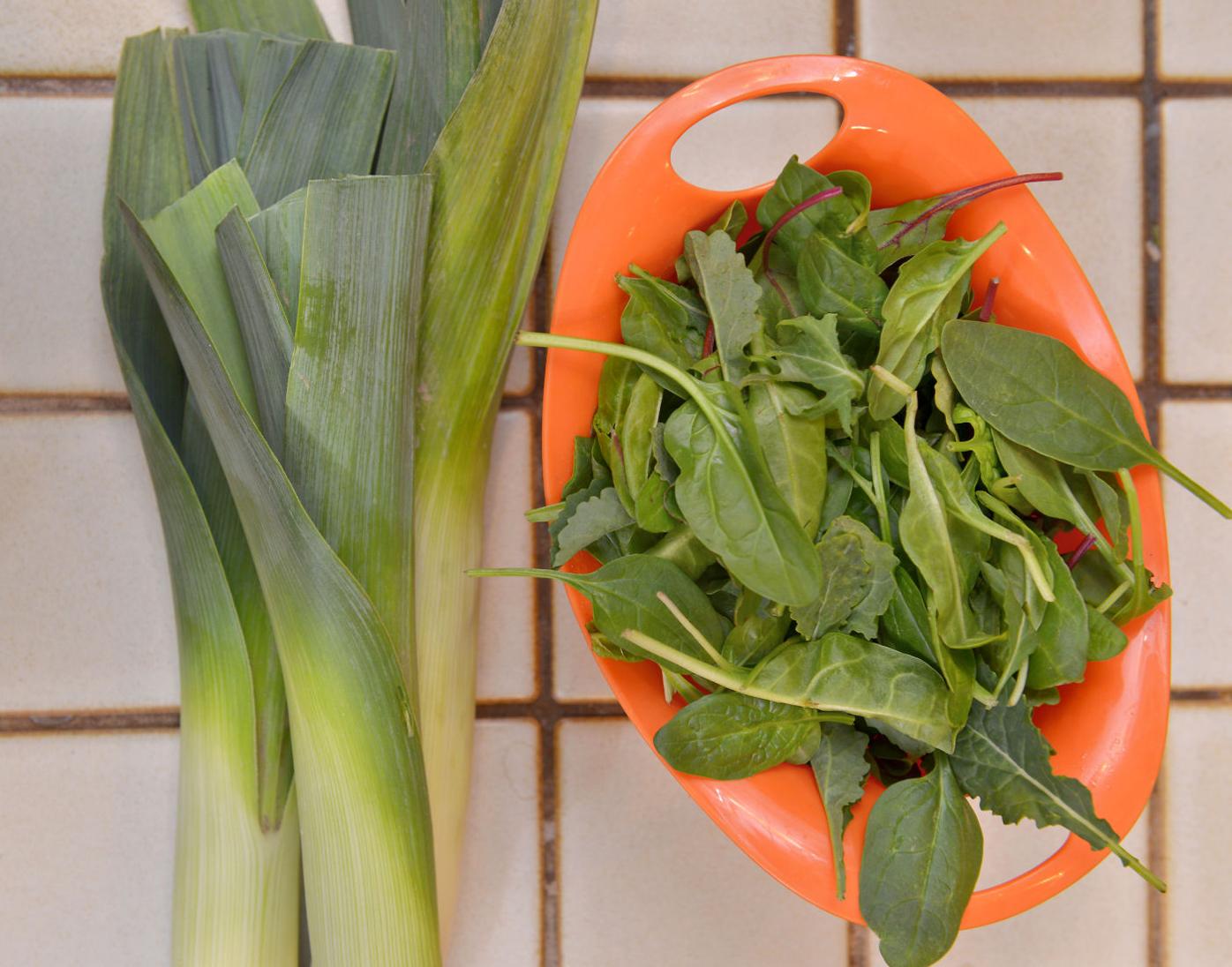 Local, fresh ingredients used in Debbie Mosimann's kitchen at Swiss Woods Bed and Breakfast include leeks, left, and a "power mix" of greens.

Debbie Mosimann stands in her kitchen at Swiss Woods Bed and Breakfast Inn, north of Lititz, with a fresh-from-the-oven plate of Coconut Macaroons.

Debbie Mosimann's Spring Strata is fresh out of the oven at Swiss Woods.

A group of women innkeepers, who call themselves Eight Broads in the Kitchen, have published their first cookbook.

Debbie Mosimann talks about her Swiss Diamond cookware in her kitchen at Swiss Woods Bed and Breakfast north of Lititz.

Local, fresh ingredients used in Debbie Mosimann's kitchen at Swiss Woods Bed and Breakfast include leeks, left, and a "power mix" of greens.

Debbie Mosimann and some female colleagues in the hospitality industry say they’re embracing their inner “broad” — and redefining the term.

“Broads are people who have reached a certain age and are now just having a ton of fun,” she said.

Mosimann and seven other women innkeepers from across the country are clearly having fun promoting their first breakfast cookbook, “Eight Broads in the Kitchen,” a brand under which they also write a food blog and conduct cooking demonstrations together.

Ever since she and her husband, Werner, welcomed their first guests nearly 30 years ago at their Swiss Woods bed-and-breakfast north of Lititz, Mosimann has been dishing up breakfast and brunch dishes informed by seasonal ingredients and influenced by her international travels and local heritage.

“I grew up in a very ‘food’ family,” Mosimann said. “My mother (Anna Mary Neff) started the (S. Clyde Weaver) bakery in East Petersburg when I was in elementary school. Dad (Paul Neff) would bring home five Lebanon bolognas, and we’d try to figure out which the best was.”

Starting at age 9, standing on a wooden meat crate, Mosimann worked at the Weaver stand at Lancaster’s Central Market.

“I did a lot of cooking and baking at home. I spent a lot of time in Germany in my teenage years and picked up a lot in all the places I went,” she said.

After earning a home economics education degree from Messiah College, Mosimann moved to Vienna for three years with a mission group. There she met her Swiss husband and moved to Switzerland for a few years.

With three young children in tow, the couple moved to Lancaster County in 1985 to open the seven-guestroom B&B on family land near Speedwell Forge Lake.

While pulling egg dishes from two stoves in the inn’s cozy kitchen last week, Mosimann said she met the other seven “broads” at Professional Association of Innkeepers conferences.

In 2009, “all the marketing people were telling us we had to have a blog,” Mosimann said. “And recipes are great for a blog. And we’re like, ‘Oh my goodness, one more thing to do. I’ll never keep up with a blog by myself.’ ” So she and a Hanover innkeeper invited six other women to take turns blogging with them.

“We invited friends, people we knew and loved,” she said. “But we picked geographically as well. So we’re from Seattle to Lenox (Massachusetts). … And they’re all fabulous cooks.

“We blog about the foods we love and the foods we put on our plates,” Mossiman said. “It’s expanded to dinner items, our travels, our thoughts — a little bit about who we are and what we are.”

The innkeepers offer up easy-to-follow recipes their guests have requested, Mosimann said, with hopes that other innkeepers will use them, too. Their cookbook contains several recipes used at each B&B, from asparagus goat cheese quiche to blueberry cornmeal pancakes.

The Swiss Woods breakfast menu can include items from gluten-free muffins to eggs Florentine and from rhubarb crisp to a fruit platter with prunes steeped in strong Earl Grey tea.

“I try to use local products, from farmers markets or straight from the farm,” Mosimann said.

“We change (the menu) with the season, with what’s available,” she said. “Right now, we’re doing a lot of spinach and chard because that’s what we can get.”

She also tries to expose her guests to ingredients they might not be familiar with.

“I use a lot of leek,” she said. “A lot of people won’t use leek at home. They’ve never bought a leek in their life. They’re not even sure what a leek looks like. And right now, I’ve got a papaya in the fridge ready for the weekend.

“The biggest cultural influence on my cooking is probably Pennsylvania Dutch, with the German-Swiss-Austrian influences, as well,” she said. Mosimann serves a Linzer torte based on pastries she sampled in Vienna, and a Swiss Birchermüesli made with fruit, nuts, yogurt and rolled oats.

“Breakfasts need to be hearty,” Mosimann said. “They need to be filling. I think that breakfast itself is overlooked — how wonderful it can be and how much there is to do that’s different, and not that hard.”

The innkeepers’ cookbook, “Eight Broads in the Kitchen,” is available at their website, eightbroads.com. Swiss Woods, 500 Blantz Road, Lititz, also has copies available in the gift shop.

salt and pepper, to taste

Blend the eggs, milk, yogurt, parsley, salt, pepper and mustard. Pour over the layered bread and veggies. Sprinkle the top with the bread crumbs, Parmesan cheese and sesame seeds.

Drizzle with the butter. Refrigerate overnight.

Next day, remove the strata from the refrigerator and allow to stand for 10 to 15 minutes.

Preheat the oven to 350 degrees. Bake for 45 to 55 minutes or until golden brown on top.

Fresh spinach is a must here, as are fresh leeks. Leaving the leeks in rings gives this dish great texture and appearance.

1 large leek (can use an onion or spring onions)

In a mixing bowl, mix the first 7 ingredients (through the cheddar) until blended. Do not overmix, as you do not want to lose the consistency of the cottage cheese.

At this point, you can cover and hold overnight in the refrigerator to bake in the morning.

When ready to bake, preheat the oven to 350 degrees.

Slice the leek, leaving the rings whole (or if using onions, dice them). Use up through the white part until the leek starts to turn a darker green.

Fold the spinach and leeks into the egg and cheese mixture, and pour into a 2-quart baking dish that has been greased, sprayed, or buttered.

Bake for about 45 minutes. The finished casserole should be somewhat puffed and a tester inserted should come out clean. The edges will be brown. At this stage, it will hold in a warm oven until you are ready to serve it. Close the door and turn the oven off.

Recipes are found in the "Eight Broads in the Kitchen" cookbook from Winters Publishing: www.eightbroads.com

Debbie Mosimann has noticed these trends in the bed-and-breakfast industry:

1. "The egg is back. There are fried eggs on top of everything. They're good for us again. … We're no longer doing egg-white omelets; people don't ask for them anymore. Soft-boiled eggs have been a hit for a little while now."

2. "There's a trend now to do just a bit of a breakfast salad, with frisee and other greens. I'm working on some blackberry compote vinaigrettes that go with a little side salad in the morning."