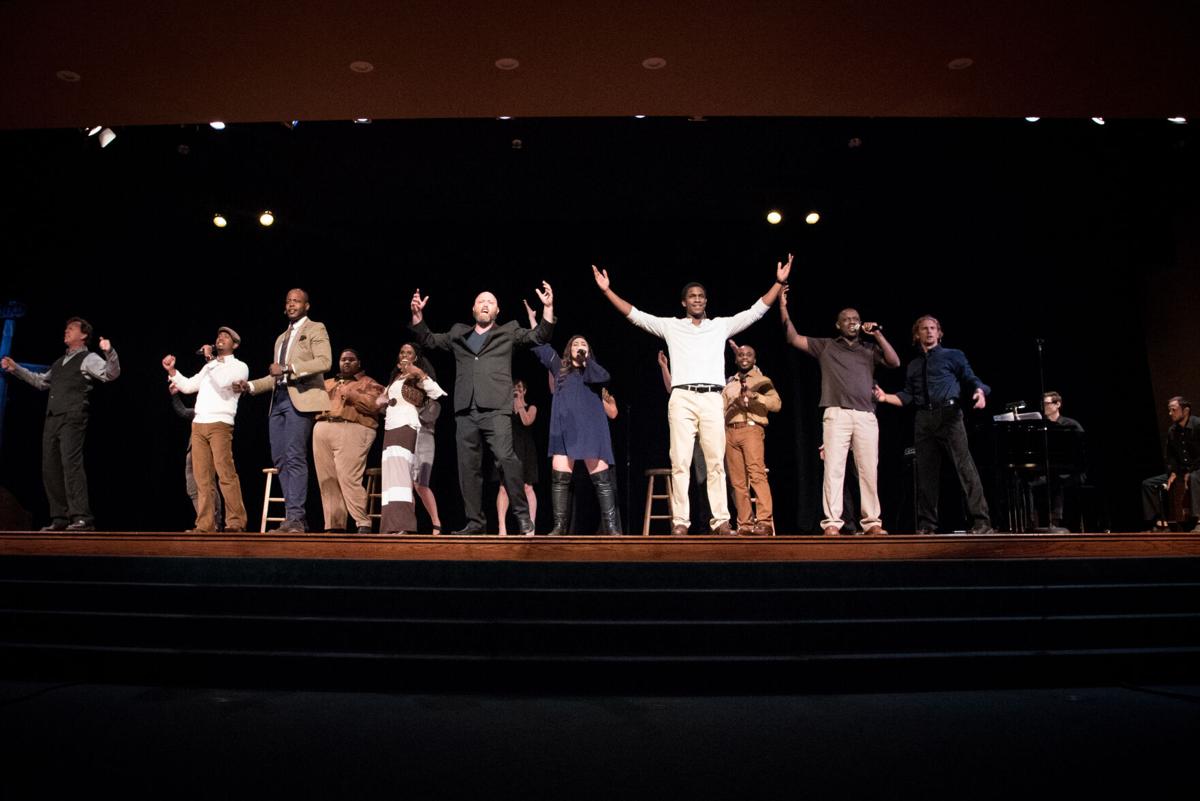 Most of the cast of Servant Stage Co.'s 2017 production of "The Civil War," shown here in a file photo, will be back to perform the show virtually later this month. The show was originally performed at Lititz Springs Park and Millersville University. 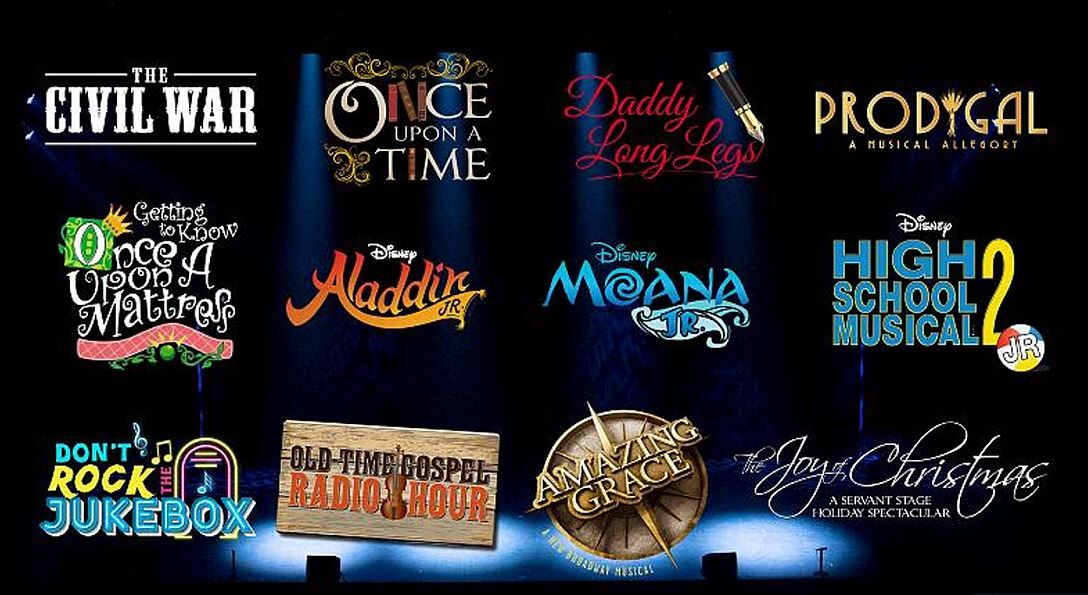 With a few local exceptions, Lancaster County theaters closed in March and have not reopened since. Many have found ways to connect with audiences online, through virtual performances — live or recorded.

This year, at least the early months of it, may find theaters continuing to pivot, as they adjust to whatever restrictions — indoor closings, reduced audience capacity, masking and social distancing requirements and more — the government and infectious-disease specialists may suggest or impose.

So theater companies are building flexibility into the 2021 season schedules they're announcing.

Since its founding, Servant Stage Co. has had flexibility as part of its mission.

Its shows are performed in auditoriums, in parks, in schools and nursing homes all over Lancaster County.

So Johnathan Bauer, the company’s executive director, is ready for a season that will start with virtual performances like those it performed throughout 2020.

“We kind of arranged (the 2021 season) in a way that we have some flexibility,” Bauer says. “Our hope at this point is that we would be doing a mix of both” virtual and in-person, live theater.

“Our January production of Frank Wildhorn’s “The Civil War” will definitely be virtual,” Bauer says.

“Daddy Long Legs” in the spring and the staged reading of “Prodigal” are kind of purposely sort of smaller-scale productions,” he says, “a little more intimate, for the purpose that we can go either way with that.

“If things are looking a little bit better (in terms of COVID-19), our hope is that we would be able to perform them live for an audience. But they are certainly shows that we can keep virtual if we need to,” Bauer says.

Here is Servant Stage’s planned 2021 season. Tickets will become available closer to the opening dates, once the pandemic situation — and each performance venue — becomes more clear.

The show is pay-what-you-will; you can choose the size of your donation when you order a ticket to the virtual performance.

Servant Stage has performed this musical, with music by Frank Wildhorn, who also wrote the music for “Jekyll & Hyde,” in the past.

It draws on letters, diaries and first-hand accounts from the points of view of those on the Union and Confederate sides, along with enslaved people. It also features the voices of Abraham Lincoln. Frederick Douglass and Walt Whitman.

“It’s a show people have been asking (for) a lot since” Servant Stage’s 2017 production, Bauer says. “It’s a popular show. It’s a show that works really well with a virtual setting, where it’s kind of a concert-style show, in a way. Most of the 2017 cast will be back for this virtual production.”

“That is definitely virtual as well,” Bauer says. The camp and production will be presented over Zoom.

“’Once Upon a Time’ is more of a cabaret/jukebox-style show,” Bauer says. “We’re creating it. It will be on the theme of fantasy (and) science fiction.”

“We’re hoping that it will be in person, but making lots of plans,” Bauer says. “The middle three weekends of April is what we’re planning to run.

“It’s based on a 1912 novel,” he says. “It has very much of a ‘Little Women’/’Anne of Green Gables’ feel. It was turned into an off-Broadway musical.”

The show is about a young woman in a New England orphanage and the mysterious benefactor who sends her to college and to whom she writes letters.

“Don’t Rock The Jukebox,” a teen revue, set for June.

“We’re hoping to do that outside someplace,” Bauer says. “Hopefully, we can do a park performance.”

The show was scheduled for 2020 but couldn’t be performed because of the pandemic.

Bauer hopes to have many of the 2020 cast back for the show.

• “Prodigal: A Musical Allegory,” set for May. It’s a modern musical retelling of the biblical story of the prodigal son set in 1930s New York.

“It’s still being worked on, so it will be a premiere,” Bauer says. “It’s a staged reading. We’ve commissioned it, and Tyler Hoover is the composer. We’re planning on at least being able to do live performances by the spring, but, with the ‘Plan B’ always ready, that it would be virtual if it has to be.”

“We did the first iteration of this show in 2014, and we’ve been doing variations of that for a while,” Bauer says. “It’s a very popular show. It’s an original radio format, where you have the old-time radio comedy and then you fill out the show with a bunch of bluegrass and Southern gospel arrangements. So, it’s new music each time” the show is performed.

“We’re hoping to be able to be performing that outside throughout the summer. We’re hoping for parks. It’s all tentative at this point. ... We already have a number of dates booked” at retirement communities, parks, churches.”

Set in the 18th century, the musical — which ran on Broadway in 2015 — is based on the life of John Newton, an English slave trader’s son who later became an Anglican priest and abolitionist. He wrote hymns including “Amazing Grace.”

“We have that reserved the first three weekends in October at Lancaster Bible College in their auditorium,” Bauer says. “We’re hoping we’ll be back in live theater venues by then, but we’ll see.”

• “The Joy of Christmas,” December.

“This will be another jukebox, concert musical that’s an original, Radio City-style Christmas musical revue.

“This will be a show that’s built for touring, to retirement communities and schools and churches,” and possibly a couple of weekends in a venue such as Lancaster’s Ware Center, he says.

Youth productions of “junior” versions of Broadway shows, produced through Servant Stage’s summer camp program, will be performed at 3 and 7 p.m. on the culminating Saturday night of each of the weeklong camps. They are:

For all the main stage and youth shows, Bauer says, “the website (servantstage.org) is probably going to be the best spot for updates” on venues and dates.

“I’m super proud of our staff, our team,” Bauer says. “It definitely has been an unsual season to need to have such flexibility. We’re able to keep our mission going forward. We’re not planning on canceling anything (on the 2021 schedule) at this point. It’s just getting creative with the way we present it.”

Tickets are now available on Servant Stage’s website for this month’s virtual production of “The Civil War.” The theater company’s administrative offices are in Strasburg, and the company can be reached at 717-455-0255 to book a performance.

After weeks of Lancaster County amassing a few hundred positive case counts per day, the county sees just over 100 new cases in the past 24 hours.