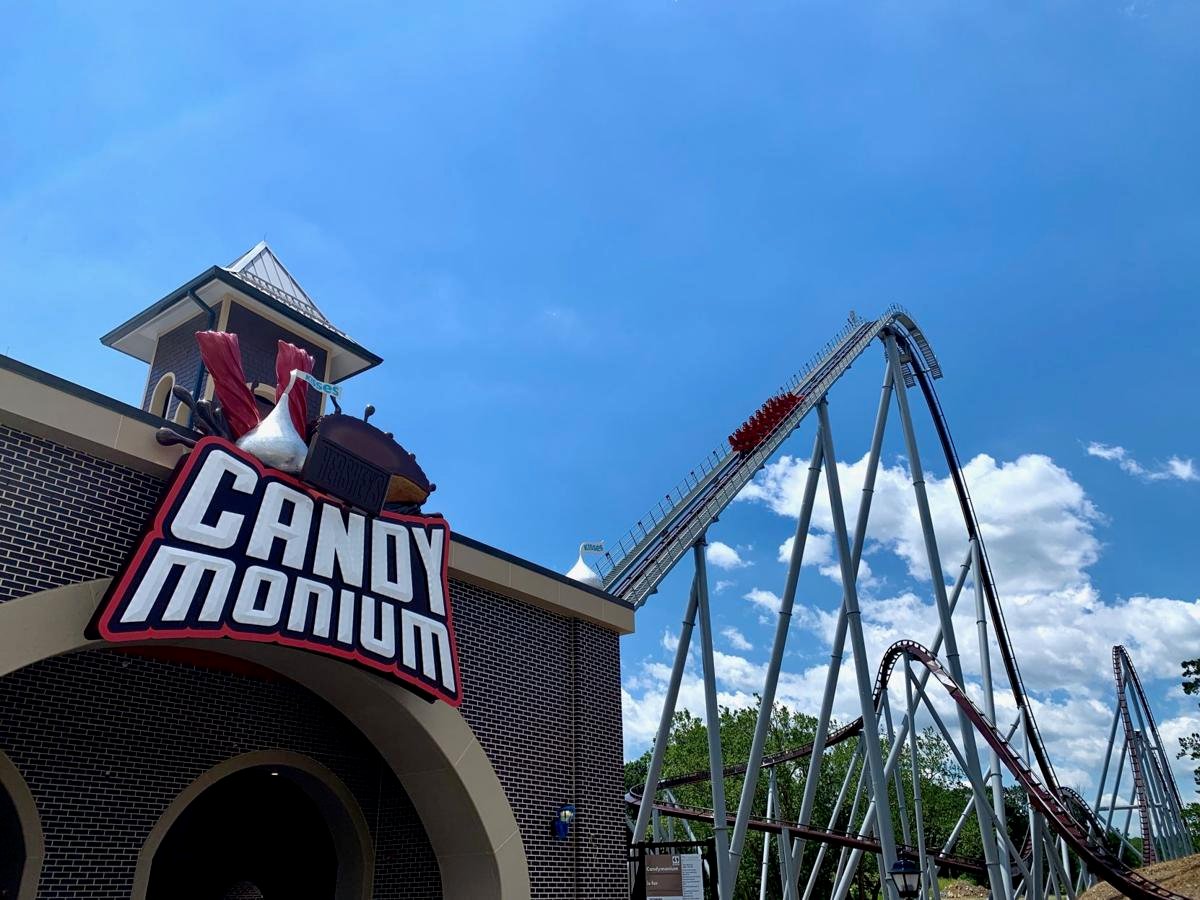 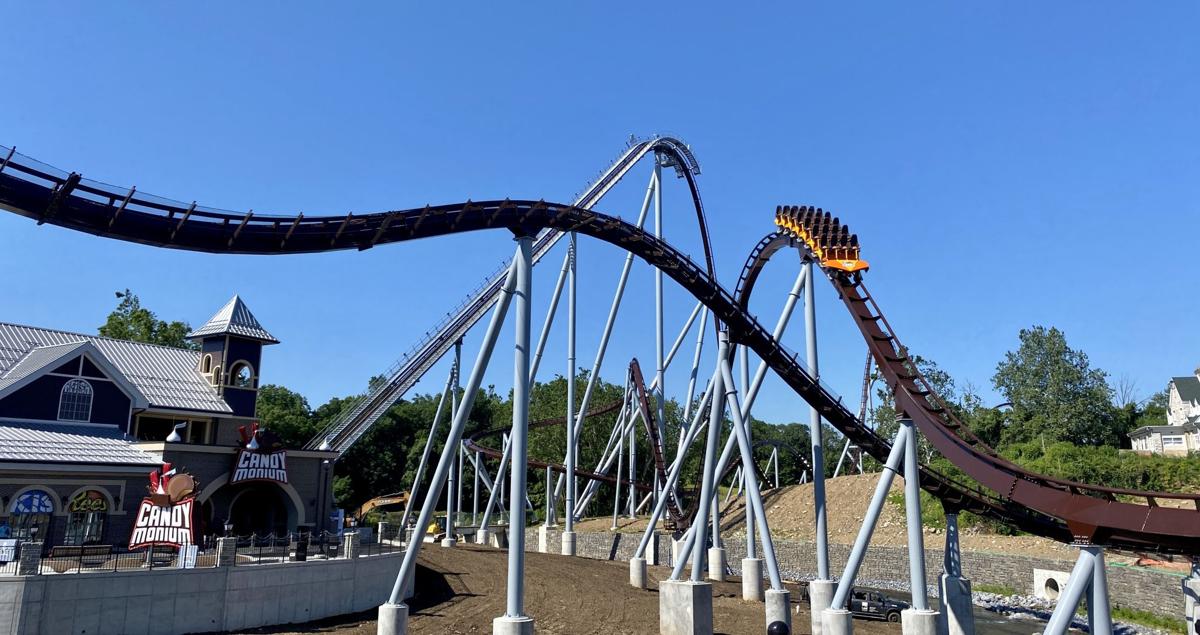 A shot of Candymonium in action. Courtesy of Hersheypark. 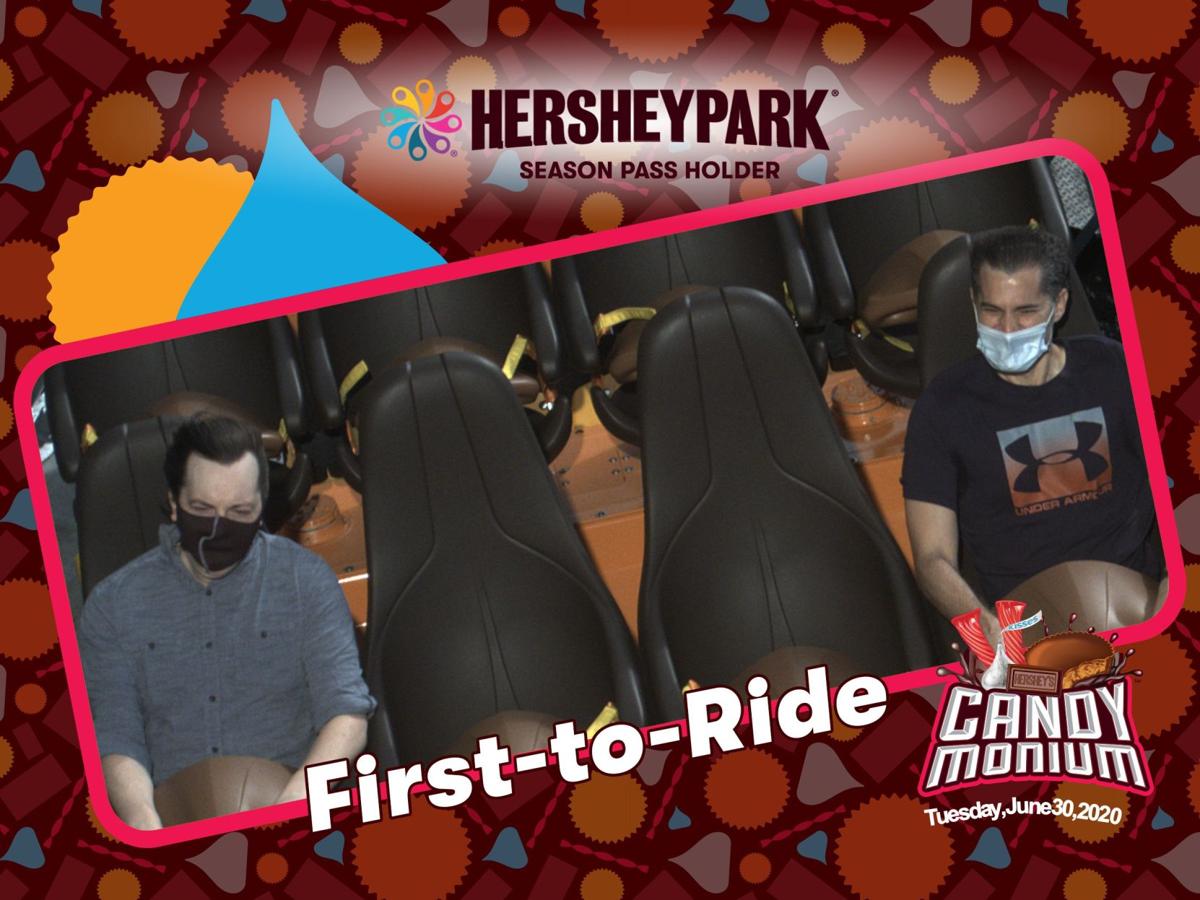 In this photo, writer Kevin Stairiker feels the full effects of Hersheypark's newest hypercoaster, Candymonium, mask and all.

When representatives from Hersheypark announced plans for Candymonium, the park’s new, 210-foot  hypercoaster, last summer, no one could have imagined the conditions in which the roller coaster would be unveiled to the public.

If you want to ride Candymonium when it debuts this Fourth of July opening weekend, be prepared for masks, a temperature check and the now-familiar six-foot perimeter around each thrillseeker.

First, the stats - Candymonium is Hersheypark’s 15th roller coaster and supposedly the “tallest, fastest and longest” in the park. With 4,636 feet of track and a top speed of 76 miles per hour, Candymonium covers a lot of ground in a short time. A “hypercoaster” is any coaster over 200 feet tall, which makes this Hersheypark’s second hypercoaster after the 2012 debut of “Skyrush.”

One of the first questions I got after riding the coaster on Tuesday morning as part of a press preview was a version of a quandary that has become commonplace for every formerly thoughtless task in the current day - is it worth it? Is riding this new roller coaster worth venturing out amid the continued unknowns of COVID-19?

The park's health standards have rocketed up in preparation for the park's opening to the general public on Friday, July 3, starting with allowing fewer guests in the park per day and disinfecting rides multiple times each day. According to Hersheypark PR manager Amanda Polyak, crowd control and cleanings will be centered especially on traditionally high-volume days during the season.

Obviously, a person's individual health makeup is composed of enough variables that it would be wholly irresponsible to give a blanket statement of, "Yes, conditions are safe, come one, come all!" But if you're feeling up for it, and trust that Hersheypark is indeed doing all that it can to provide as safe an experience as possible, then well, prepare for the shear Candymonium of it all.

When I arrived Tuesday morning, I went through two contactless temperature checks and didn't take my mask off for the hour and a half I was in the park. While queuing up for the ride along with King Size season pass holders and a number of media peers, representatives from Hersheypark announced that riders may take their masks off once they are seated securely in the ride, though they would have to put them back on once the ride is finished.

Personally, I've already experienced a lifetime's worth of everything from yelling and spitting to much, much worse from fellow coaster riders mid-ride. Plus, I'd never ridden any ride, much less one that reaches top speeds of 76 miles per hour, with something on my face, so it was worth keeping on if only for the experiment. During my time at the park, I saw no one without a face covering of some sort.

Even just approaching the structure of Candymonium, it's apparent to see that the coaster was made with attention to craft. The initial ascent is familiar enough, but one of the most striking aspects of the ride is what isn't there - the sound.

I associate the careful tick-tick-tick sound of an ascending coaster car with the most delicious feeling of dread. It’s the sound of tightly controlled chaos. Rising on Candymonium in near silence created palpable nervousness in me that I don't remember experiencing on other coasters in Hersheypark.

When Candymonium was announced last year, I rode all of Hersheypark's existing 14 coasters in a day and created a ranking that many top commenters around the region glowingly called "a waste of space" and "totally wrong." For reference on my feelings on Hersheypark’s pre-existing roller coasters, click here.

We ranked the 15 rollercoasters of Hersheypark; here were our favorites

I don't drink coffee, but dropping from 210 feet at 9:30 in the morning on a Tuesday is what I imagine the right espresso feels like. What I most enjoy about the coaster is that it's not all about that initial drop - the excitement is sustained through to the end.

To whit, not long after the drop, there’s a 123-degree Hammerhead curve - think of the last quick, illegal U-turn you made - which, for me, caused a single tear to dislodge itself from my left eyeball and make its way, through shear force alone, into my ear. At ride's end, I quickly felt for the tear line - touching my face in public, curses! - but it had already dried.

Though the ride is described as being exactly two minutes and 26 seconds long, it registered for me as roughly a minute and a half from its slow takeoff to its return. The impact at the end of the ride reminded me of when old cartoon characters collide with a pole, leaving their bodies straight but sending their limbs jutting forward.

That being said, it's still 4,636 feet long, making it the longest in the park. For my first ride, I rode in the front, taking each turn as it came and feeling every sudden jump and pull. My mask somehow stayed in place and I was able to keep one hand in the air and another gingerly holding onto the ride's lap bar restraint.

For the second ride, I rode all the way in the back, which only increased the exerted force. It felt sort of like a small thumb pressing softly but firmly right on my cerebral cortex. From the back row, the familiar cry of, "Hold onto your hats" quickly became "Hold onto your mask," as the sharp turns of the ride attempted to send my face covering to the same Theme Park Great Beyond as a dear lost flip-fop, Dorney Park swing ride circa summer 2001.

Despite the pull of gravity, my mask stayed on, and I completed two of the quietest roller coaster rides of my life. Of course, not only is the ride naturally quiet, but there were also only four people taking up the 28 seats of the train, none of which elicited so much as a “WOOO!”

In many ways, Candymonium is the more refined cousin to Skyrush, formerly the tallest and fastest coaster in the park. The specs are very close - top speed of 76 miles per hour versus 75, and a peak of 210 feet as opposed to 200. But whereas Skyrush is a ride I would not recommend to people who are skittish about roller coasters, Candymonium could be just what people hoping to overcome those fears are looking for due to a lack of loops and truly death-defying spins.

In the coaster ranking I wrote last year, I gave the top spot, deservedly, to the Great Bear, an iconic piece of the theme park since its debut in 1998.

Will Candymonium replace the Great Bear in the hearts and minds of Hershey fanatics? Perhaps, but it will take this summer and many more after it to cement its status.

As Hersheypark opens on Friday and faces a summer of continued uncertainty, there is at least one piece of information that should quickly become obvious.

Here's a list of all the canceled, rescheduled and postponed summer concerts at Hersheypark

In the 1952 Looney Tunes short “Operation: Rabbit,” there’s a scene where Wile E. Coyote is executing yet another sure-to-fail scheme against …

Lancaster County and neighboring counties have entered the state’s “green” phase, and recreational and cultural establishments have begun reopening.

The Magic & Wonder Theater in Paradise is offering free admission to its “Worlds of Wonder” show for military personnel, health care worke…