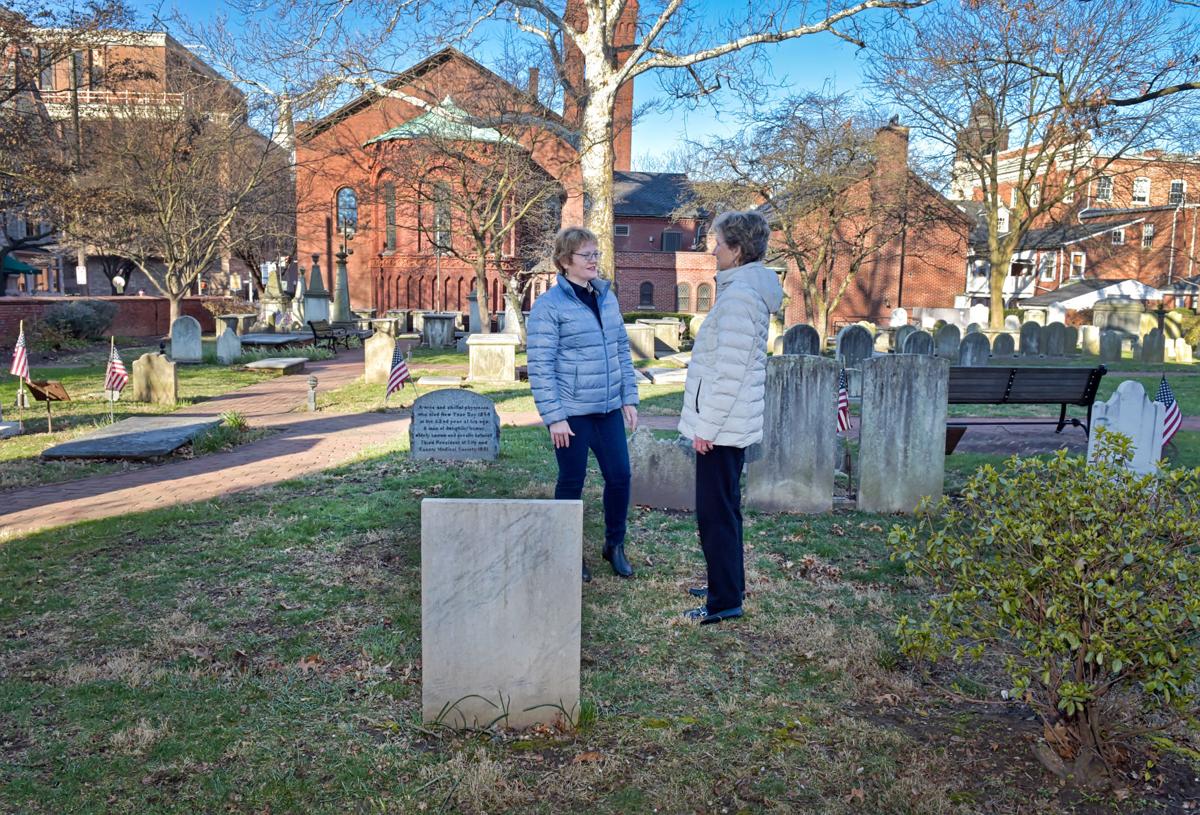 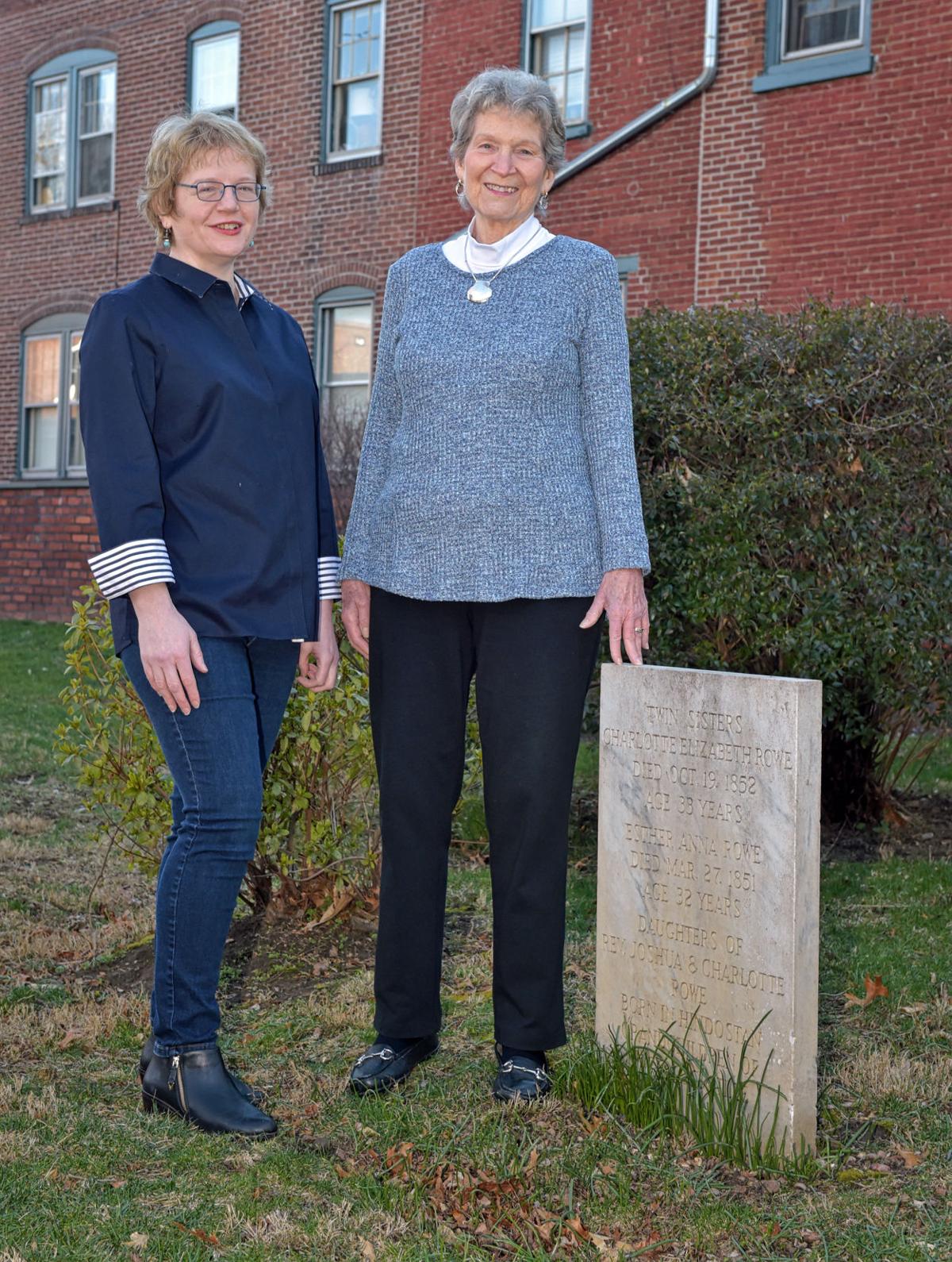 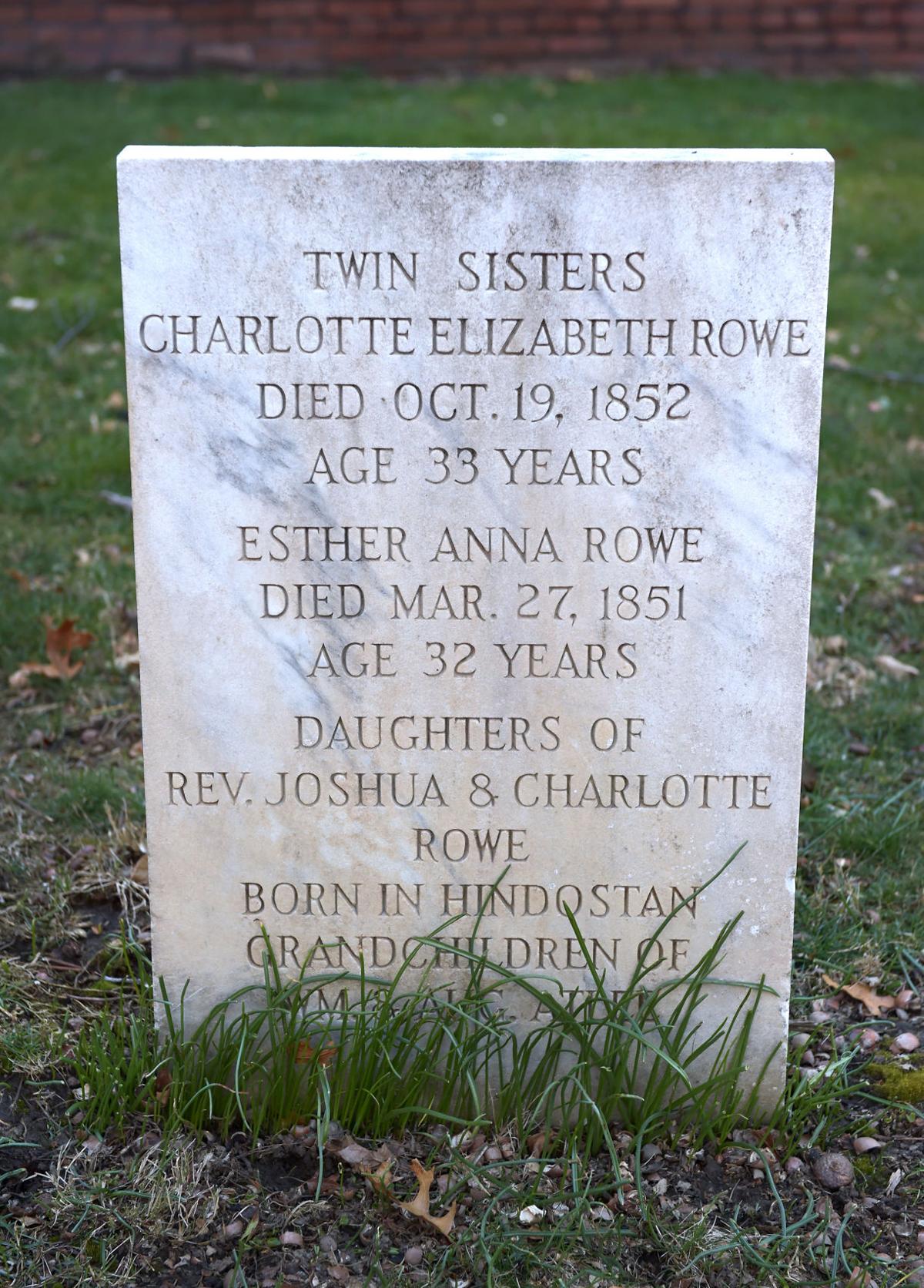 Charlotte Atlee Rowe is buried in the St. James Episcopal Church cemetery next to this headstone where her daughters are buried.

On Dec. 28, 1863, a remarkable woman was laid to rest beside her twin daughters in the Atlee family plot in Lancaster’s St. James Episcopal Church Cemetery.

There is no headstone for Charlotte Atlee Rowe. In fact, most people, including her relatives, had no idea about her prominence or her final resting place until the Rev. Reid Trulson discovered Charlotte’s name while researching the names of missionaries appointed by American Baptist International Ministries as it prepared to mark its 200th anniversary in 2014.

His research uncovered something history had long overlooked: She was the first American female missionary appointed by any denomination.

Trulson will discuss Charlotte’s life at 4:30 p.m. Monday, March 23, at St. James Episcopal Church as part of the church’s 275th anniversary celebration year. People may attend in person or via Livestream. To watch on Livestream, visit Saintjameslancaster.org/Livestream.

One of seven children born to William Augustus Atlee, a justice of the Pennsylvania Supreme Court, and Esther Bowes Sayre Atlee, Charlotte was born in 1782 and baptized at St. James. She spent her early years in the family house on Duke Street opposite the church.

Orphaned at the age of 11, she moved to Massachusetts, where she was raised by her older sister, Elizabeth. In 1803, she married Nathaniel Hazen White in Rutland, Vermont. But their marriage was cut short by his death a year after they married. She then joined First Baptist Church in Haverhill, Massachusetts.

In 1815, Charlotte applied to the American Baptist Board of Foreign Missions to serve as a missionary.

And that’s where Trulson’s research took an unexpected turn.

“We traditionally said that Adoniram and Ann Judson were the first missionaries who were appointed in 1814,” Trulson said.

But further research revealed that only males were appointed as missionaries, not their wives.

That’s when he came upon Charlotte’s name in the records.

“I wondered why I had never heard of her before,” he said. “It struck me that that’s a rather significant thing to be the first woman in America to be appointed as a missionary.”

As he dug into her story, he discovered a controversy that followed her for years.

Charlotte’s application to serve as a missionary in Burma alongside the Judsons had been approved by a quorum of seven Baptist board members. However, some board members believed the appointment was illegal because of her gender.

To better gauge the board’s sentiment, the full board was polled by letter. While many opposed her appointment, the majority agreed the appointment was legal because bylaws did not specify that a missionary had to be male.

In a subsequent attempt to nullify her appointment, the board declared it had no money to send her to Burma, where the Judsons were stationed. But Charlotte had a modest estate, which she contributed to the board to self-fund her missionary trip.

In December 1815, she sailed to Kolkata, India, with the Rev. George Henry Hough and his wife, as a missionary with a restricted appointment. They planned to obtain a printing press in India to present to the Judsons.

In the two months it took to arrange shipping for the printing press, however, Charlotte met and married British Baptist missionary Joshua Rowe, a widower with three sons. She went with him to Digah, India, more than 350 miles north of Kolkata, where he served.

She had three children by him — twin daughters Charlotte Elizabeth and Esther Anna, and a son, Judson Ward.

But her status as a missionary at that time came into question. Because she had married a British Baptist missionary, the American board removed her name from their missionary rolls, claiming she had resigned her post and had left the board.

However, Trulson found that was not the case. Combing through archives at Regents College at Oxford University, he found letters Charlotte had written to the British Baptist Missionary Society, stating her desire to be recognized as a missionary by both the American and British mission groups. Her request was rejected.

She worked with Rowe until his death in 1823. Although she was not recognized by either missionary board, she continued to serve as the sole missionary in that region of India with oversight of 10 schools and a Hindi-speaking congregation. She performed this work without any financial aid from either the American or British missionary organizations.

In 1826, she, her twin daughters and son moved to London — the three sons from Rowe’s previous marriage were old enough to stay in India — where she asked the British Baptist Missionary Society to appoint her as a missionary so she could return to India.

“But that was too scandalous,” Trulson said, because the British board also refused to appoint women as missionaries.

In December 1829, she returned to the United States where she started a school for girls in Philadelphia. She also wrote for the Columbian Star newspaper under the pseudonym “Honesta,” in which she described her experience as a female missionary.

In the 1830s, she moved to Lowndesboro, Alabama, where she taught English, music and drawing at a girls academy. By 1850, she had returned to Lancaster County, where she served as principal of Strasburg Female Seminary. Her two daughters died within 18 months of each other in 1851-1852 and Charlotte returned to Philadelphia where she lived until her death on Christmas Day 1863.

When Trulson called St. James Church in 2017 to inquire about Charlotte’s grave, he was surprised to find no one knew she had been buried in the cemetery.

Although church leaders knew Charlotte’s twin daughters were buried in the family plot, “they were not aware she was buried in their cemetery,” he said.

A card file kept by the church indicated she was buried beside her twin daughters, and Trulson later came upon a short death notice in the Lancaster Examiner and Herald newspaper.

Ann Atlee Webber, is a direct descendant of Charlotte Rowe but was unaware of her past or that she was buried in the family plot.

“The roots of my family on both sides are pastoral ministry,” Webber said. “And here she was a missionary.”

Not just a missionary, but America’s first female missionary.

Added Cordelia Moyse, a visiting scholar at Franklin & Marshall College who accompanied Trulson and nine others on a tour of India last year as they retraced some of Charlotte Rowe’s steps, “The fact that she came back here is a wonderful circular story.”

The church expects to place a marker on her grave later this year.

Pennsylvania is sitting on billions in coronavirus relief money. What’s the hold up?

Concern over the new coronavirus is causing religious organizations to alter schedules. Most churches are heeding Gov. Tom Wolf’s request that…

MCC cancels Pennsylvania Relief Sale due to the spread of coronavirus