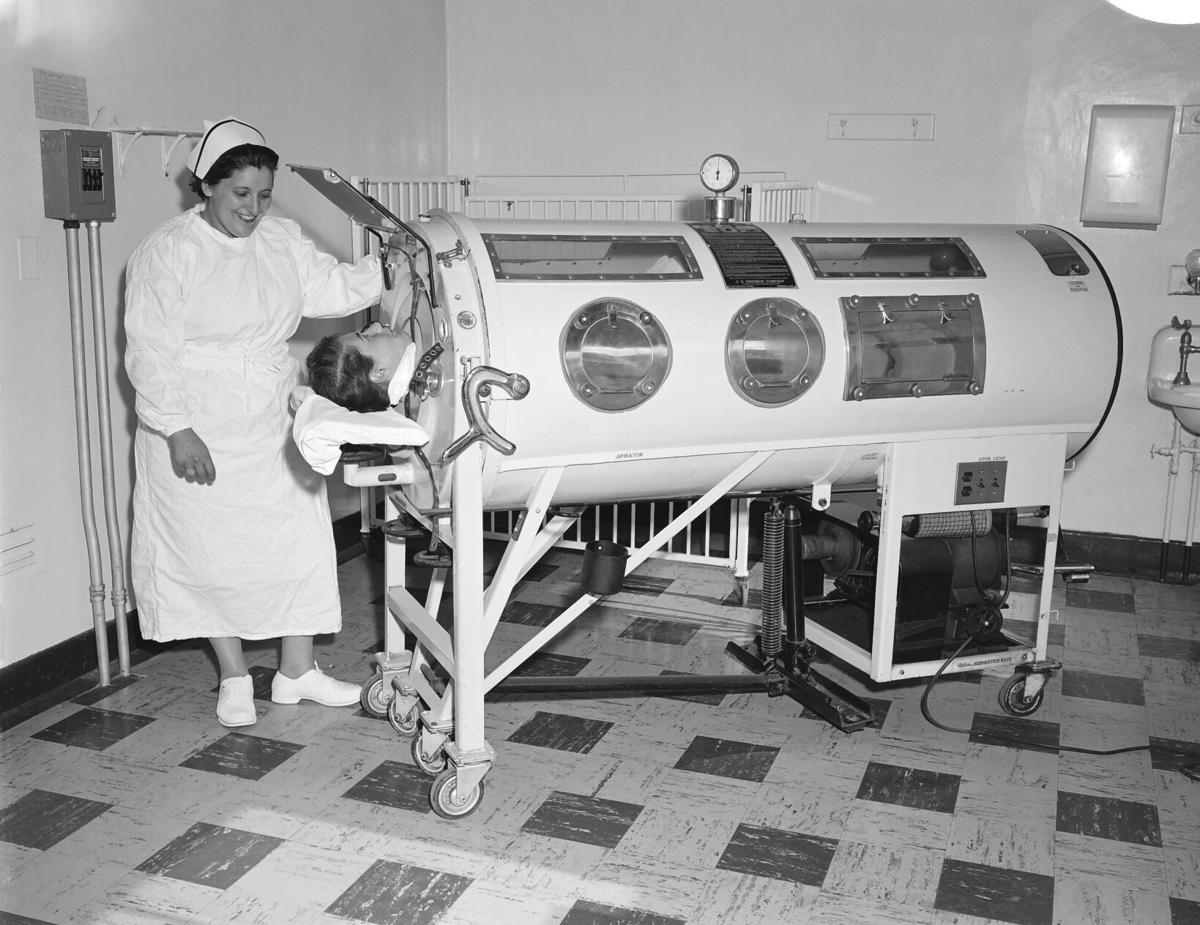 In this 1960 photo, a nurse cares for a polio victim, confined to an iron lung in Rhode Island. Polio was a feared disease during the epidemic of the 1940s and '50s. (FYI Image is in the public domain.) 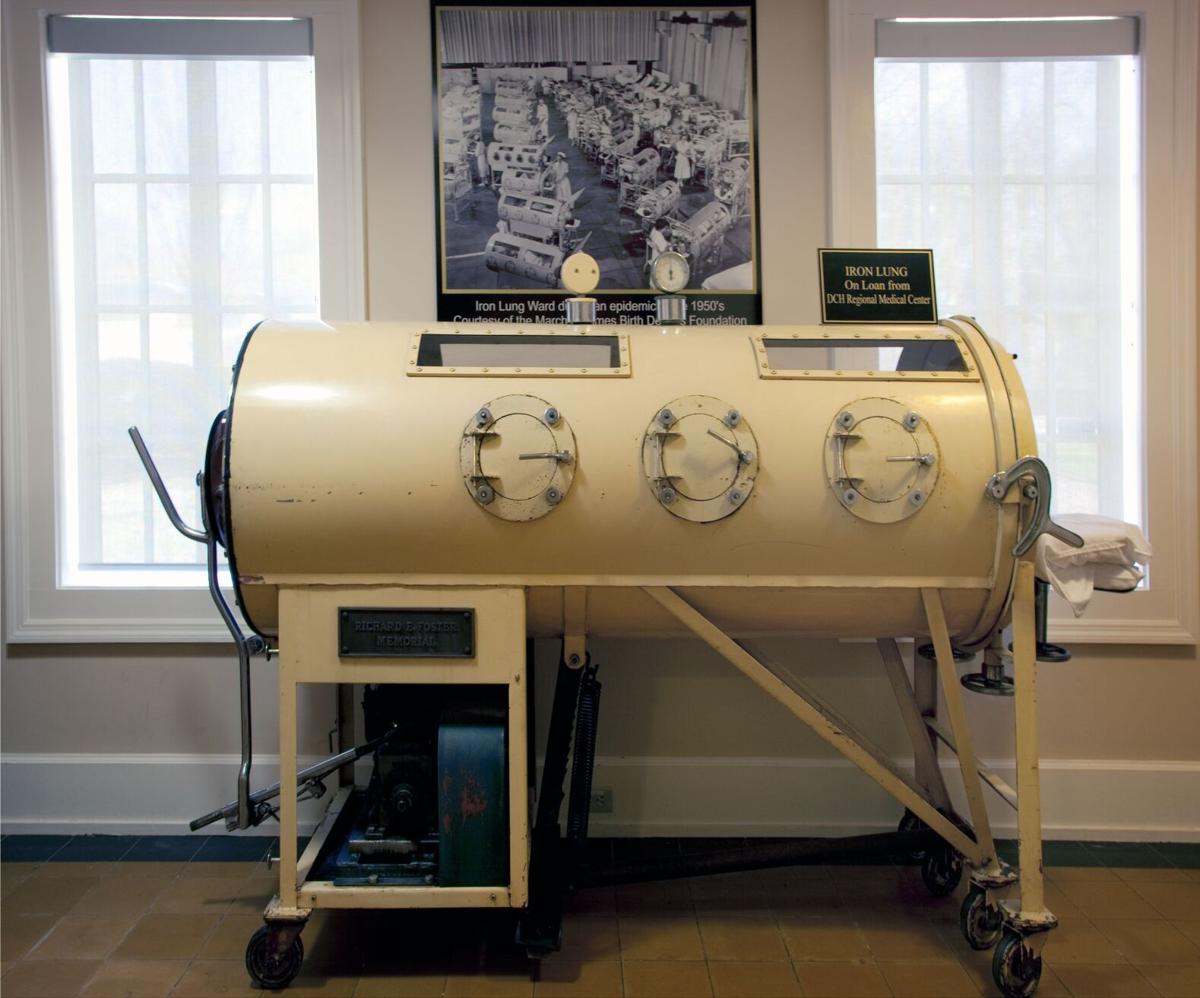 This example of an iron lung (c. 1933), which was used to "breathe" for polio patients until 1955, when polio vaccine became available, is located in the Mobile Medical Museum, Mobile, Alabama.

The inspiration for this story came from the pandemic we are facing today, as well as a story this column carried some time ago about the polio epidemic in Lancaster County in the early 1950s.

The writer of that story said he had no personal experience with the illness. I have only second-hand experience.

One of my best friends, Janet Miller, at age 10 or 11, spent weeks in Lancaster General Hospital with polio. I can still visualize her in her bed there.

In a nearby room, in an iron lung, was the wife of Dr. J. William Frey, head of the Department of German at Franklin & Marshall College. I met Dr. Frey in Janet’s room, for when he visited his wife, he customarily visited the other polio patients. An accomplished recorder musician, he taught Janet how to play the instrument.

While I never heard Janet express self-pity, she did complain about the intense pain with a spinal tap. From LGH, Janet was moved to the Pennsylvania Hospital for Crippled Children at Elizabethtown, where the cruelest of its harsh rules allowed only two visitors at a time for a limited period every two weeks.

Naturally her parents wanted to spend as much time with Janet as was allowed. In any case, my age did not permit me to visit her.

Sometimes I went to the hospital with her parents, whom I called my second parents, and I pushed her young sister in a stroller around the hospital grounds. Janet would wave to us from her window.

Eventually, Janet’s father went to the director of the hospital and demanded her release, saying that Janet’s mother could no longer bear the separation from her daughter. Unfortunately, for a while Janet’s parents took her to a chiropractor who had made exaggerated claims about what he could do for her.

By the time they sought help from traditional medicine and Janet was fitted for a brace, it was too late to straighten her twisted back. Because of the doctors’ recommendation that Janet swim in salt water, her parents bought a place in Ocean City, New Jersey, where the Hotel Flanders had a saltwater pool.

Janet and her mother and sister would spend the whole summer at the shore, and her dad would join them every weekend.

On his weekly trip, her dad passed my house, and I often went along for the weekend, sometimes for the whole next week. In the first year, I pushed Janet in a wheelchair on the boardwalk. After that, she could walk, steadying herself by holding onto my arm.

To get to the pool she rode her bike, with me trotting alongside, and we always spent most of the day there. She took swimming lessons at this pool from a man who was a high school swim team coach. I listened to his instructions from the poolside and then jumped into the water to practice the stroke in question.

Janet became quite a fish, and developed strong arms. She even occasionally dived from the low board.

Janet earned a bachelor’s degree at Goshen College and a master’s degree at Penn State in an area having to do with fabrics.

She married a fellow student who earned a master’s degree in clothing design. Their wedding was unique; the groom designed and made the wedding party’s colorful clothing (neon lime green, orange and fuchsia) and prepared the food for the reception.

A few years later, the couple opened a boutique in Honolulu, where they sold clothing that they themselves designed. Both also did some teaching.

Janet was involved in local retailers’ organizations and became the chairwoman of Retail Merchants of Hawaii, a 250-company organization.

Tragically, Janet died of a heart attack at age 58, a week after collapsing as she stepped out of a restaurant in New Mexico following meetings in that state and Texas.

On this trip she was on a mission to work toward founding an institute at a community college in Hawaii that would encourage youth to consider a career in retailing.

Some polio victims have died of a relapse later in life, from what is called post-polio syndrome. According to the Mayo Clinic’s website, post-polio syndrome’s symptoms are progressive muscle and joint weakness and pain, general fatigue and exhaustion with minimal activity, muscle atrophy, breathing or swallowing problems, sleep-related breathing disorders such as sleep apnea and decreased tolerance of cold temperatures.

I suspect that Janet’s lungs were compromised and breathing the cold, thinner air at the higher elevation in New Mexico put too much strain on her heart.

Let’s hope that people recovering from the current virus do not suffer long-term effects or relapses later in life!

The author lives in Landis Homes, south of Lititz. According to LNP | LancasterOnline archives, Janet Miller was diagnosed with polio in 1954.

Deck the halls with these 7 holiday tours in Lancaster County

Ask the pediatrician: How has pediatrics changed over the past 50 years? [column]

In December of 1971, I was stationed in Da Nang Vietnam. I was drafted 8 months earlier and had to leave my family and my girlfriend. We dated…