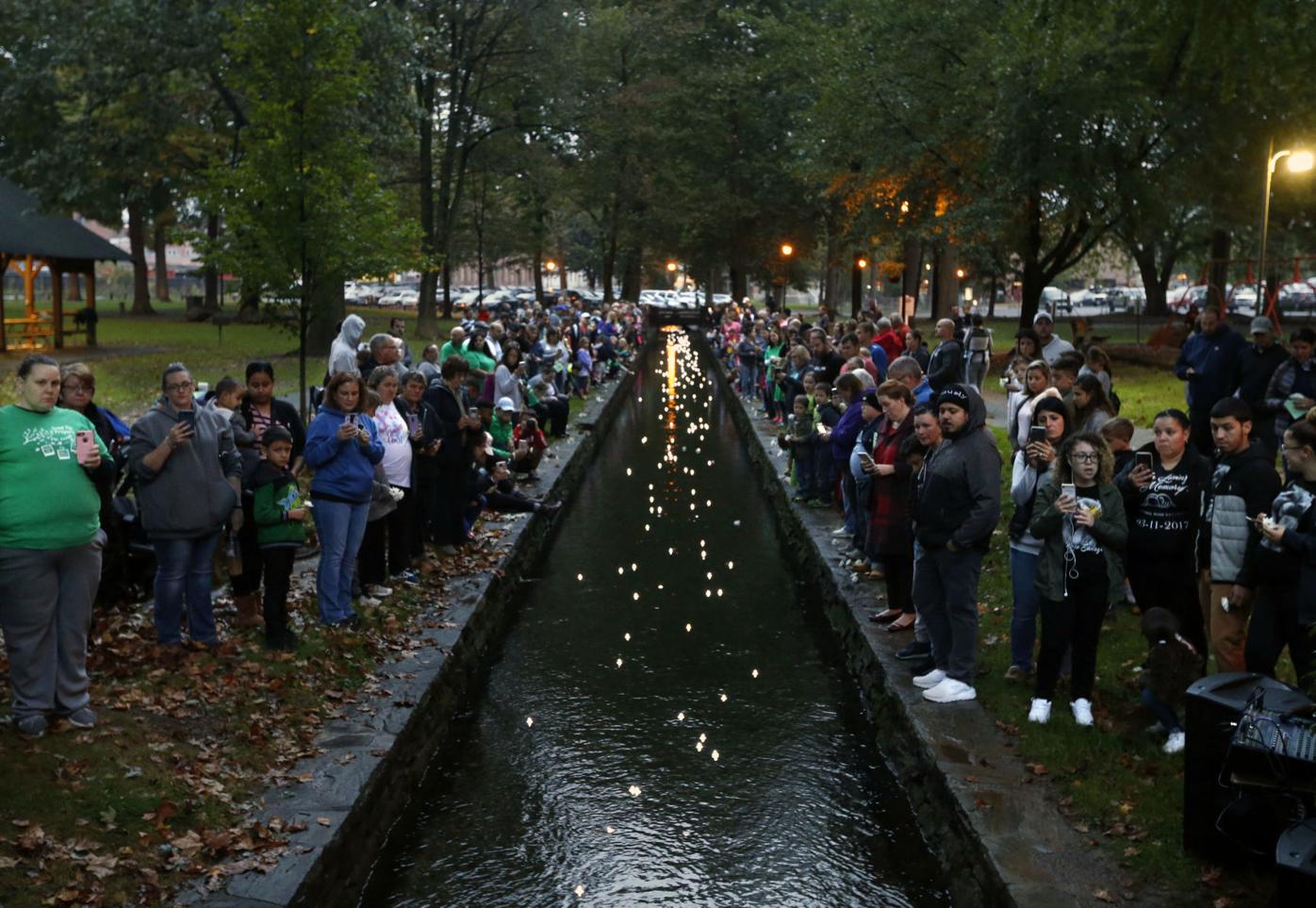 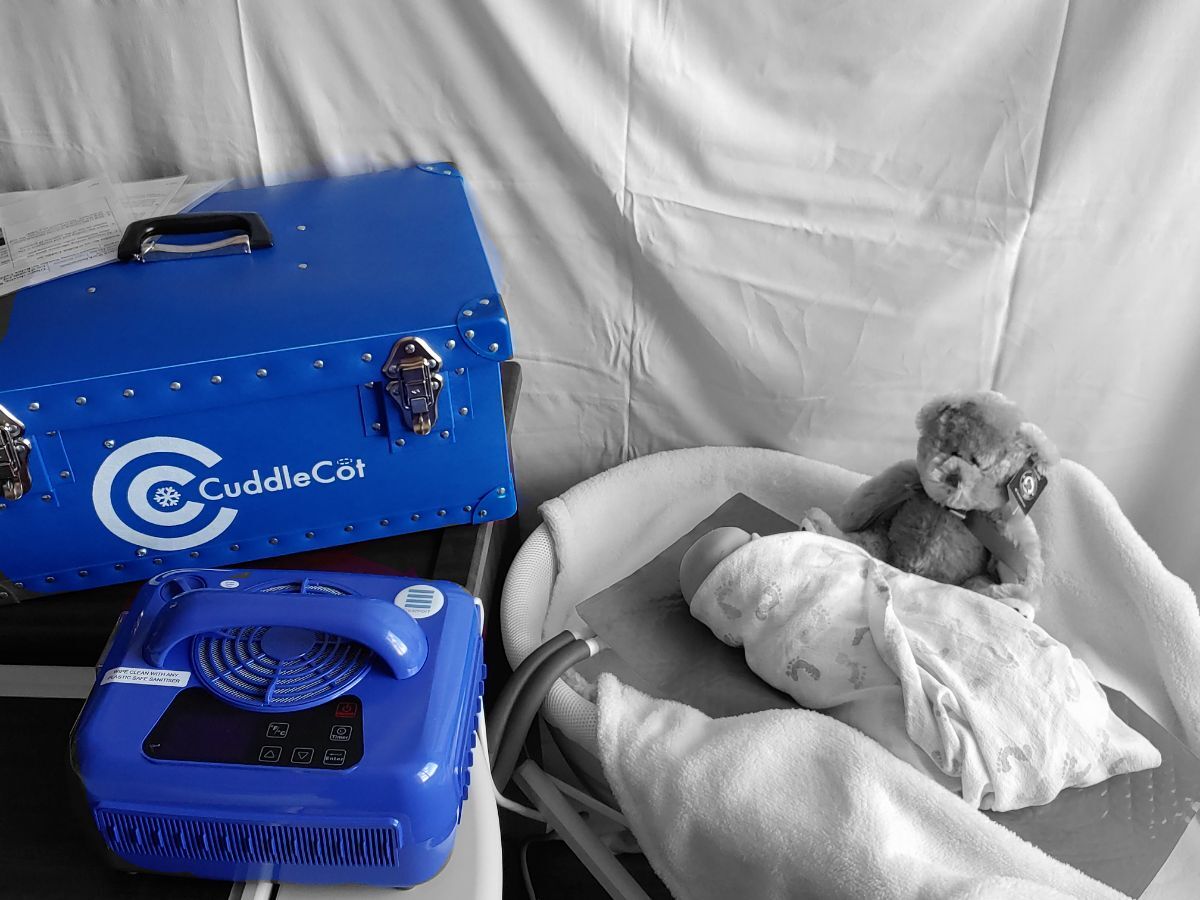 Cuddle cots, like this one at WellSpan Ephrata Community Hospital, allow grieving parents to spend more time with their stillborn children.

Cuddle cots, like this one at WellSpan Ephrata Community Hospital, allow grieving parents to spend more time with their stillborn children.

It was 2017 when Calan Hummer first began preparing to be a big brother, and his parents were dreaming of the ways he’d watch over little Lynnley and the memories the siblings would make together.

Calan and his parents ended up creating those memories over just three days at Heart of Lancaster, now known as UPMC Pinnacle Lititz, where Lynnley arrived four days before a scheduled C-section, perfect except for her unbeating heart.

Knowing Lynnley would be born still, the delivery room was cloaked in “silence except for the sniffles,” remembers her father, Wayne Hummer.

At his wife Kristi’s bedside waited a bassinet equipped with cooling units that allowed the Lititz couple to keep their daughter with them for the duration of their hospital stay. That Cuddle Cot bought them precious time to begin accepting the reality of their loss — and to prepare themselves, Calan and other loved ones for a different future than the one they had envisioned.

“Even though we didn’t get to see her smile or laugh, we did get to know her, to put her first outfit on, to say ‘hello’ and ‘goodbye,’” says Kristi, a 36-year-old teacher. “If that had happened all in one hour, I don’t think I would have healed the way I did.”

How hospitals support families after a stillbirth has shifted over the last decade, thanks to changing social mores, policies that promote time together and technology that expands the window of togetherness and connects those experiencing loss with others who know the same, immeasurable grief.

Sharon Kauffman started as a labor and delivery nurse at Women and Babies Hospital in 1982. For 10 years, she lobbied the hospital to create a position for a perinatal bereavement care coordinator. She has now held that role for three years, working solely with women who’ve experienced pregnancy loss.

She guides mothers and fathers through the process in-hospital and continues to meet and correspond with them, as desired, weeks and months after they go home.

“The grief journey for each family is unique and different,” Kauffman says. “(We want) to recognize their grief, to continue to help them parent that child, and that’s something that’s different over the last couple of years.”

Pregnancy loss isn’t rare in America, where relatively few efforts have been made in recent years to better understand the factors contributing to stillbirth or to push insurers to cover the kinds of testing that might provide more answers.

Stillbirths after 28 weeks declined in the U.S. during the 1990s but leveled off around 2003, according to the Centers for Disease Control and Prevention. Nationally, about six out of every 1,000 babies are born without a heartbeat. Among Black mothers, that figure jumps to 10.32 per 1,000.

Yet the inability or unwillingness to acknowledge stillbirth is deeply entrenched in the U.S., with its austere Protestant roots and pre-Industrial Revolution infant mortality rates that only seemed to normalize child loss.

Context is key to how we’ve treated such losses in the past and how we treat them today, says Millersville University’s Carrie Lee Smith, an associate professor who specializes in medical sociology and reproduction and birth in particular.

During the darkest days of the Great Depression, a poor family’s loss might have been viewed with some relief — one less mouth to feed. But over the last 50 years, family size shrunk and the average age of a woman at the birth of her first child crept close to 30.

Many mothers experiencing stillbirth now may have suffered previous miscarriages, ruled out future pregnancies because of their age, or endured expensive and invasive fertility treatments, Smith notes.

Elisabeth Kubler-Ross’s landmark “On Death and Dying,” published in 1969, has also revolutionized Americans’ understanding of loss.

“Culturally, we became more open in accepting death and acknowledging death,” Miller says. “But as medicine gets better, this idea that a child could die — or a mother could die during childbirth — it’s kind of mind-boggling to people still.”

Through the turn of this century, parenting a stillborn child often meant leaving a hospital without a birth certificate attesting to the baby’s existence.

Stephanie Cole, founder of the Lancaster-based Sweet Pea Project, paved the way to change that for Pennsylvanians in 2011. Her organization continues to support families with education, blanket and book donations, and a large public event each October for Pregnancy and Infant Loss Remembrance Day.

Celebrities, too, have played a part, sharing details of their own losses, such as when model and television personality Chrissy Teigen this week revealed the baby boy she was expecting with husband John Legend died about half way through the pregnancy.

Hospitals have also transformed, allowing affected mothers to stay in rooms further from nurseries filled with crying babies and stopping the automatic process of removing babies to the morgue.

Today’s parents are encouraged to “socialize” for as long as they are in the hospital.

Wayne Hummer sang Lynnley “Baby Mine” from the movie Dumbo and read her “Love You Forever,” a beloved nursery story written by a father who experienced stillbirth twice. Kristi brought her little girl to a rocking chair and snuggled her as she would have a healthy baby.

The Hummers also invited family members to meet Lynnley and had professional photos taken by Now I Lay Me Down to Sleep, a non-profit organization dedicated to capturing images of families grieving child loss.

Kristi says the time Calan spent with his sister helped him understand why Lynnley never came home, and why his mom and dad experienced sadness for many months after that. Calan, 7, is now a big sister to Emalynn, 1, named in her older sister’s honor.

The Hummers’s non-profit organization recently helped bring a Cuddle Cot to Wellspan Ephrata Community Hospital so other families would have the same opportunities.

Last fiscal year, 10 babies were born still or died at birth at WellSpan Ephrata, out of 831 live births.

At Women and Babies, there were 43 instances of infant demise out of 4,319 deliveries in the same time period.

Over the last 10 years or so, Kauffman says access to perinatal bereavement training and other resources has increased.

“That made a huge difference in the confidence level of staff and in our competence,” Kauffman said. “It’s much easier to share your compassion when you’re not caught up in knowing what to say or what not to say.”

Since 2017, Kauffman has been able to give every grieving mother who wants one a Comfort Cub,  a weighted therapy bear that may help combat loneliness or fulfill the physical aching to hold a baby.

Strategies that help parents retain some control over how their baby is cared for may be especially helpful, Smith adds. That could mean allowing a woman to carry her baby for a natural delivery rather than requiring a C-section; allowing parents not to spend time with their child, if they don’t wish it; or offering an autopsy to try to assess cause of death instead of relying only on non-invasive procedures or genetic testing.

“One of the things we try to pay attention to is, when we have an institutionalized way of coping, is everyone on board with it or might some people feel pressured,” Smith says. “It’s about being patient-centered and giving the patient all the information they need to make their own choices.”

This April, WellSpan Ephrata Community Hospital set up its first Cuddle Cot, a gift from two non-profit organizations whose founders had each experienced a stillbirth.

Lynnley’s Light, spearheaded by Wayne and Kristi Hummer, and Our Baby’s Legacy, founded by Sarah Adams of Lancaster, raised about $3,000 to cover the cost of the unit.

In September, Tierney and Troy Bleacher of Lancaster were the first to use the device following the unexpected loss of their second son, Auden, at 33 weeks. The little boy with a head full of dark hair and his brother’s nose remained with the couple in recovery for about a day.

“It initially was a little difficult having him there,” Troy says. “ But we cherished it and took advantage of it while we could.”

Such devices —  small enough to fit discreetly inside a Moses basket — may improve women’s mental health by giving them time to bond with the child.

Women whose babies were stillborn reported high levels of psychological distress at least nine months after those deaths, according to a University of Michigan study. Nearly a quarter of those women had been unable to see or hold their babies.

“The finding that bereaved mothers have four times higher odds of depressive symptoms and seven times higher odds of PTSD symptoms compared with nonbereaved parents underscores the powerful impact of this loss and the severe distress which it can create for parents,” reported Dr. Katherine J. Gold. “Seeing and/or holding the infant after delivery or death is widely thought to identify who has been lost and create memories to grieve, thereby leading to improved psychosocial outcomes for parents.”

About 95% of hospitals in the United Kingdom use Cuddle Cots to allow parents that time, and the manufacturer reports they are now in “hundreds” of U.S. facilities. But their cost must often be borne by donors.

The gift to WellSpan Ephrata proved a gift to the Bleachers, especially in the time of COVID, when Tiereny says many friends learned about her pregnancy by text and few saw her expectant belly grow.

“It was like he’d been a secret,” she says. “It could be easy for him to be forgotten by everyone else. Holding him and having that time, it meant he was here.”

Angela Myers, a nursing assistant and chair of the bereavement committee on the Family and Maternity Unit, welcomes the addition of the Cuddle Cot. She has attended a perinatal bereavement program at Hershey Medical Center and shares the lessons she learned there with staff in emergency and other departments, recognizing that not all who experience child loss will come to the maternity floor first.

“We want to raise awareness across the hospital, to make sure no matter where this patient comes in, they have the best care possible,” Myers says.

Her care for the patients carries on to the first Mother’s Day, holidays and the anniversary of due dates, when she sends cards to remember each baby who died.

This year Myers also organized a virtual remembrance for Oct. 15, during which all WellSpan Ephrata families who’ve lost a baby over the last two years can connect and share experiences.

She hopes to make it an annual, in-person event in the future.