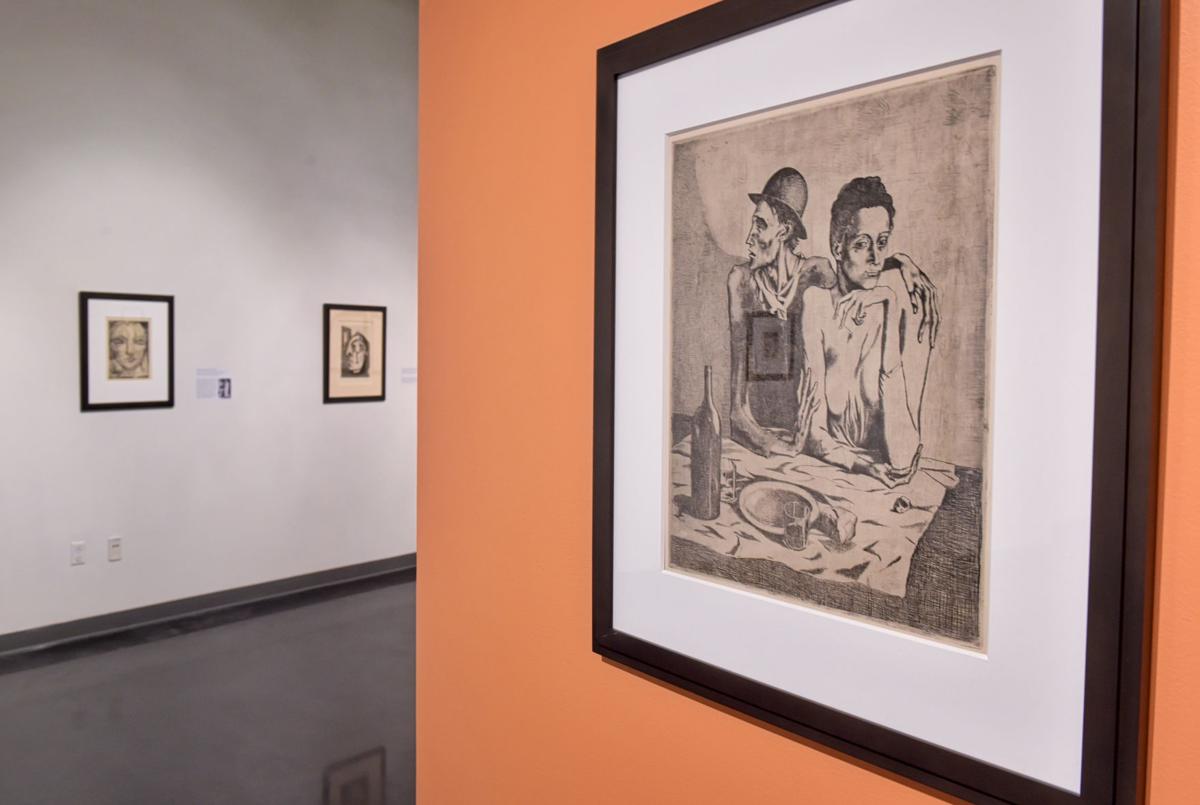 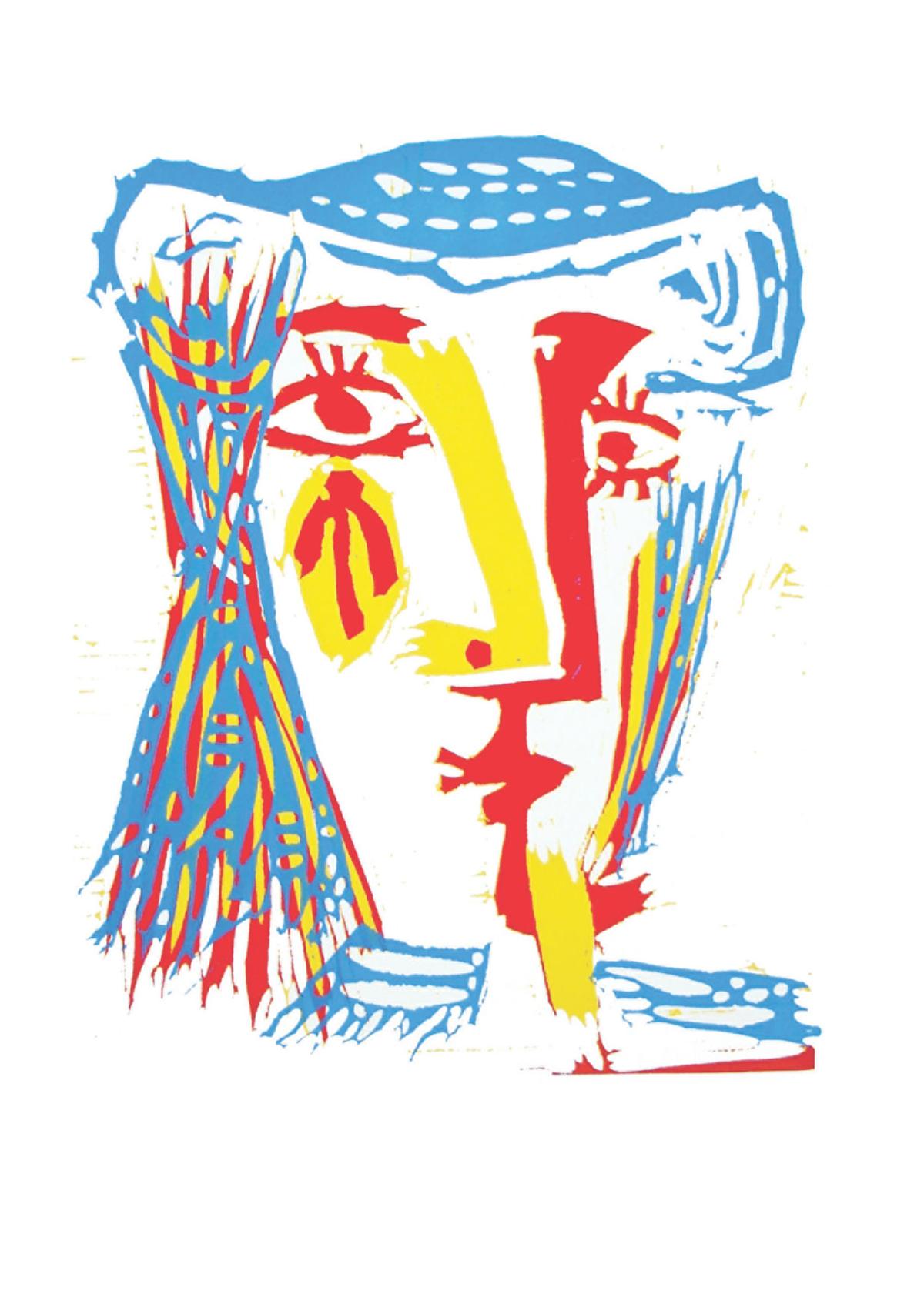 Picasso's Femme au Chapeau de Paille Bleue, 1962. (From the collection of John Szoke.) Linocut printed in three colors from two plates. Part of the exhibit "Picasso: A Life in Print" on display at the Susquehanna Art Museum until Sept. 22. 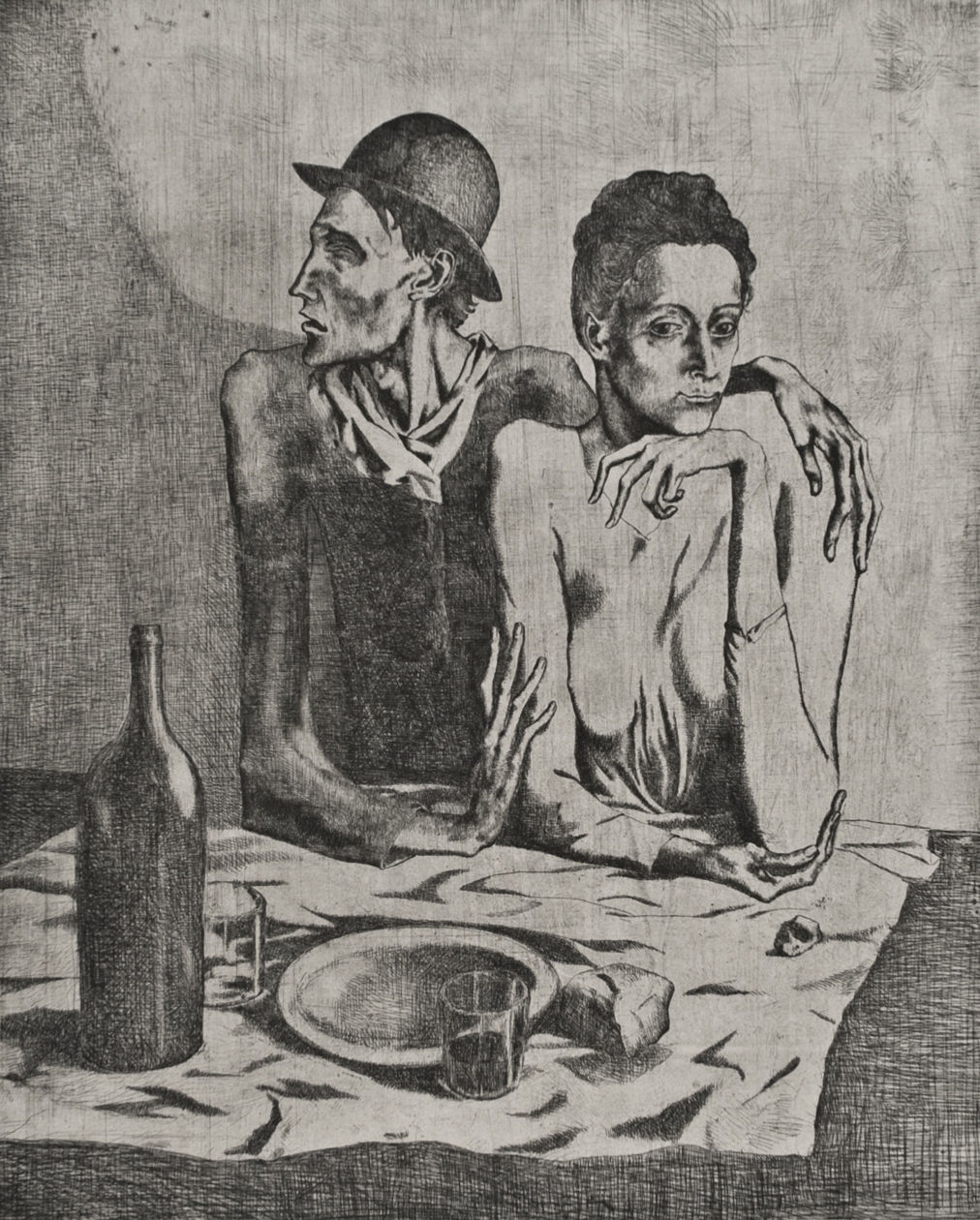 Picasso's Le Repas Frugal, 1904. (From the collection of John Szoke.) Etching. Part of the exhibit "Picasso: A Life in Print" on display at the Susquehanna Art Museum until Sept. 22. 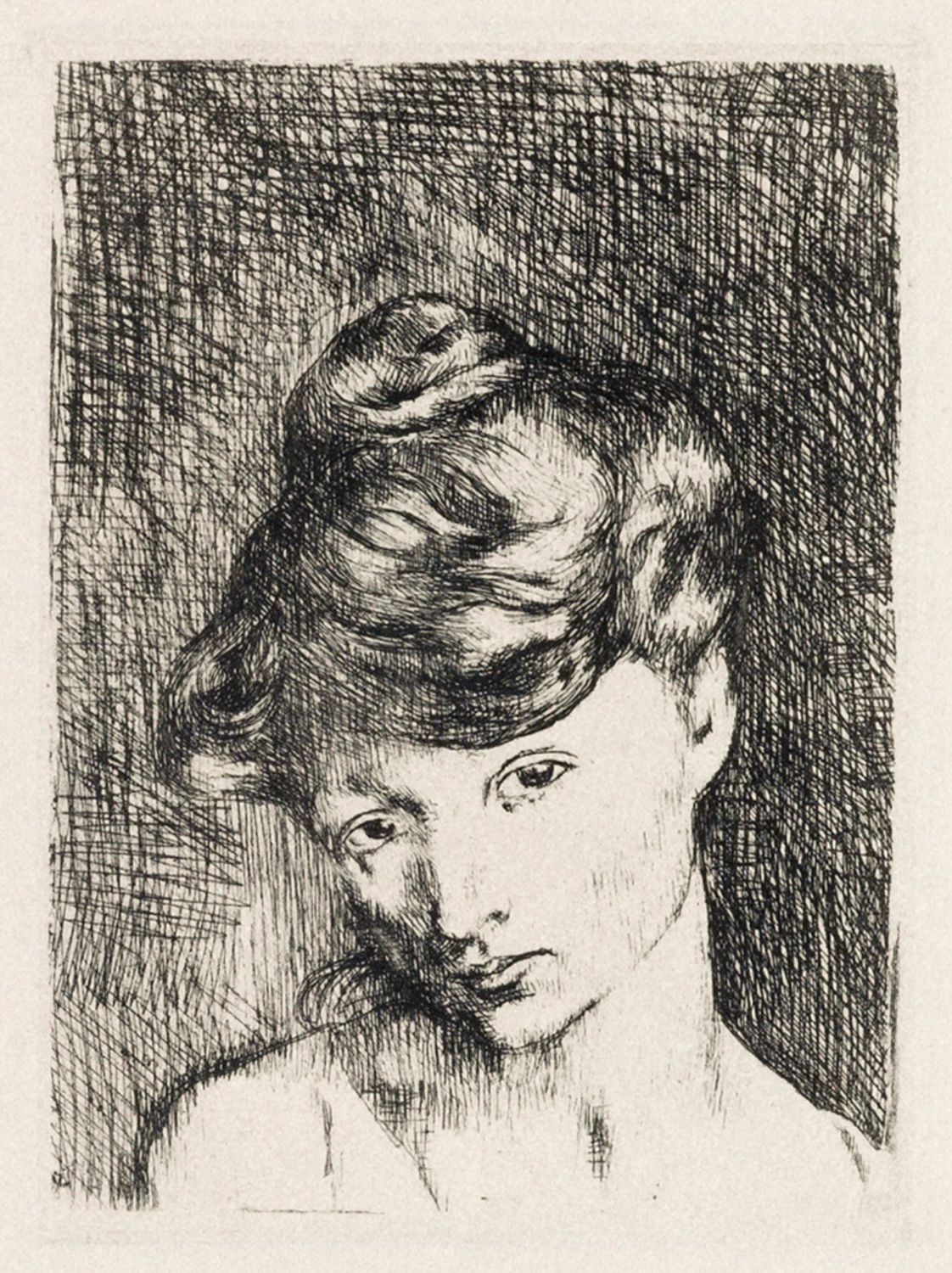 Picasso's Tete de Femme: Madeleine, 1905. Etching. (From the collection of John Szoke.)  Part of the exhibit "Picasso: A Life in Print" on display at the Susquehanna Art Museum until Sept. 22. 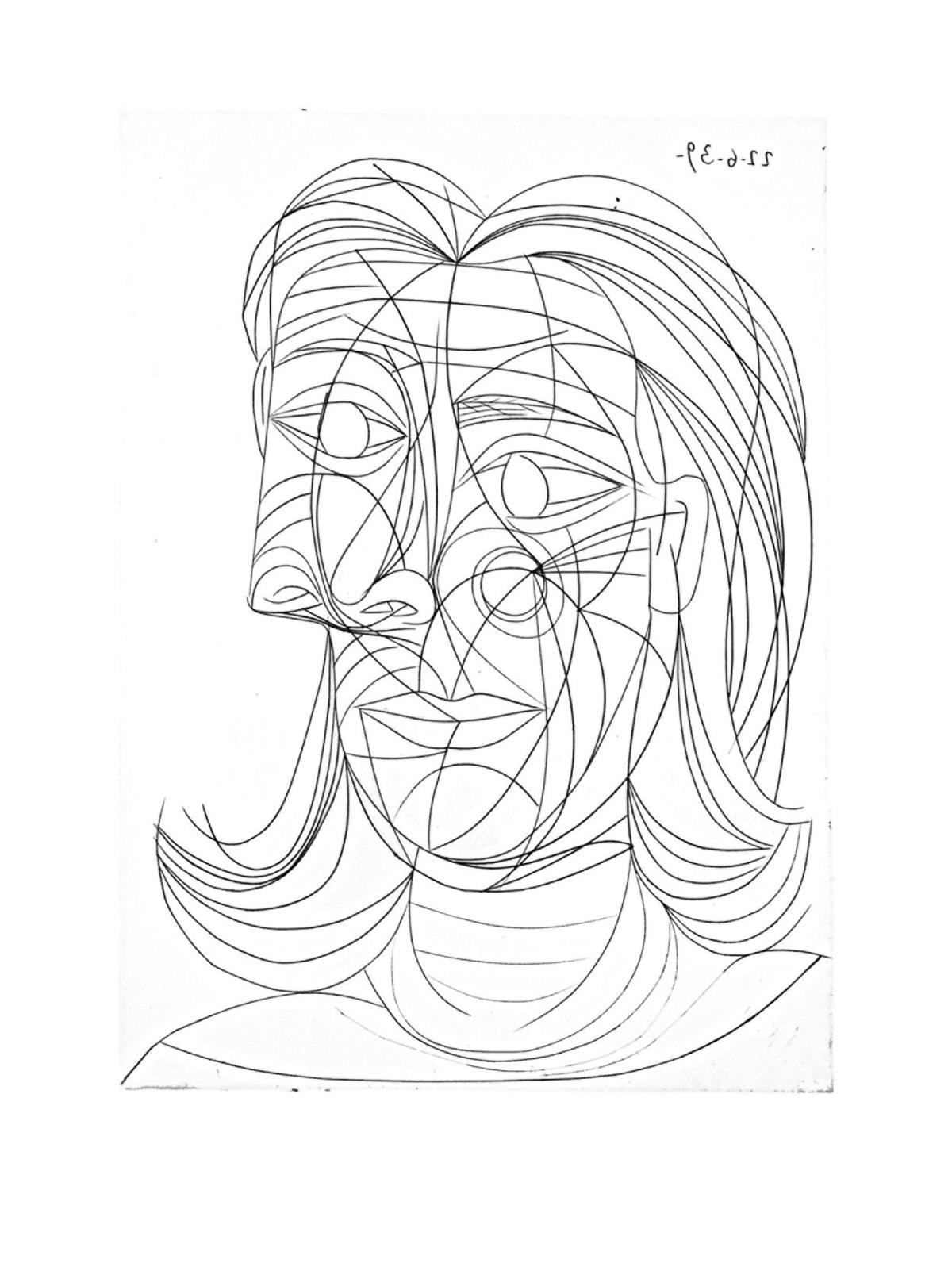 Picasso's Tete de Femme. 1939. (From the collection of John Szoke.) Part of the exhibit "Picasso: A Life in Print" on display at the Susquehanna Art Museum until Sept. 22.

Picasso. Ask any person to name a famous artist and chances are their reply will be Picasso. Most people, if they are familiar with Picasso’s work at all, associate the iconic artist with his distorted, fractured, cubist paintings, but Pablo Picasso (1881-1973) worked in a wide variety of styles and mediums from oils to bronze. Not least of all was his career-long fascination with printmaking and engraving.

Through Sept. 22, the Susquehanna Art Museum in Harrisburg exhibits “Picasso: A Life in Print — 45 years of Collecting from the John Szoke Gallery” — the largest collection of Picasso’s prints currently exhibited in the state and the only time this group of prints will be shown together. (A special screening of the documentary “Young Picasso” takes place Sunday at the museum and offers a deeper look into the artist’s life.)

The exhibit displays prints from as early as 1904, from the somber and evocative “Le Repas Frugal” (completed at the end of Picasso’s famed “Blue Period”) to the lavishly detailed ode to Picasso’s hero, Rembrandt, called “Ecce Homo, d’Apres Rembrandt” completed in 1970 — just three years before the artist’s death. The exhibit illustrates the evolution, experimentation and refinement of a master artist.

“What we’re offering to the public is a glimpse into Picasso’s life that they wouldn’t be able to get anywhere else,” says executive director Alice Anne Schwab.

The collection of Picasso prints came to the museum through John Szoke — a New York City-based art collector with a focus on print works and one of Schwab’s former colleagues.

“I was surprised he even remembered the name of the museum where I worked,” says Schwab with a laugh. “I haven’t worked for him since 1987. Lauren (Nye, director of exhibitions) emailed him and he wrote back something like ‘I will only display something in Pennsylvania when I talk to my Pennsylvania consultant, Alice Anne Schwab.’ ”

Szoke, who Schwab says has an immense collection of Picasso and Edvard Munch prints, has the distinction of spending the most money than anyone ever for a Picasso work on paper.

Lauren Nye worked directly with Szoke and his team to curate an exhibition that brings together a career-spanning collection of Picasso’s prints.

“Szoke feels very strongly about these works,” Nye says. “They’re not just a commodity to him. He’s spent so much time with each one and researching them — and he knows so much about Picasso’s life and where each (print) fits into Picasso’s life. I wanted to try to find work from every stage of his career, so you sort of take a journey through his life.”

Picasso was an extremely prolific artist. Besides the thousands of paintings he made, he created some 2,500 printed works.

Picasso never had any formal training in printmaking, but due to his intense desire to master any medium he worked in, and his access to some of the top printers in the world, he was able to create innovative works that rivaled the best artists in history.

“All the printmakers (Picasso) worked with were from historic printmaking shops,” Nye says. “So artists for decades or even hundreds of years had been coming to those shops. Picasso was an avid reader and student of art history, and he was especially interested in the history of printmaking. Rembrandt was one of his absolute favorites. Picasso was very egotistical, I would say, and he wanted to be the Rembrandt of his time.”

The results are astounding. The works collected within “Picasso: A Life in Print” contain a selection from the Suite Vollard — a set of 100 etchings and engravings made for the influential collector Ambroise Vollard as part of a trade Picasso made with him for paintings (possibly works by Cezanne, Gauguin and Renoir). Picasso maintained a relationship with Vollard until the collector’s death in a car accident in 1939.

“There are people that say Suite Vollard is one of the great wonders of the art world,” Schwab says.

The work within the Suite Vollard features neoclassical figures, surrealistic nudes and allusions to Greek mythology such as the Minotaur — a figure that rears its head in many of Picasso’s works. Just before embarking on the Suite Vollard, Picasso illustrated an edition of the Roman poet Ovid’s classic “Metamorphoses” — which begins, fittingly for an artist such as Picasso, with the line: “My purpose is to tell of bodies which have been transformed into shapes of a different kind.”

Bodies with shapes of different kinds are exactly what you’ll see in “Picasso: A Life in Print.” There are the frenetic, but flowing lines of the linocut “Joseph et la Femme de Potiphar, d’apres Tintoret et Rembrandt” and pleasantly disorienting multiple perspectives of the cubist-inspired linocut “Femme au Chapeau de Paille Bleue” (one of the few works to incorporate color).

“I think the best thing that a lot of people have walked out of here knowing that they didn’t know is that his style changed dramatically throughout his life,” Nye says.

That sense of exploration, determination and eventual mastery is evident in “Picasso: A Life in Print.”

As Picasso once said: “Anything without a goal to achieve, a result to conquer, a puzzle to solve, a mystery to penetrate fails to interest me.”

Picasso also famously said “Give me a museum and I’ll fill it.” Here he proves that once again.

Once again, it’s time for the Wool Frolic at Landis Valley Farm Museum.

Expand - or start - your art collection this weekend!

Painting and photography juxtaposed at Curio

One way to describe an artist’s job is to say they show us how to notice. To pause. To see things with fresh eyes.