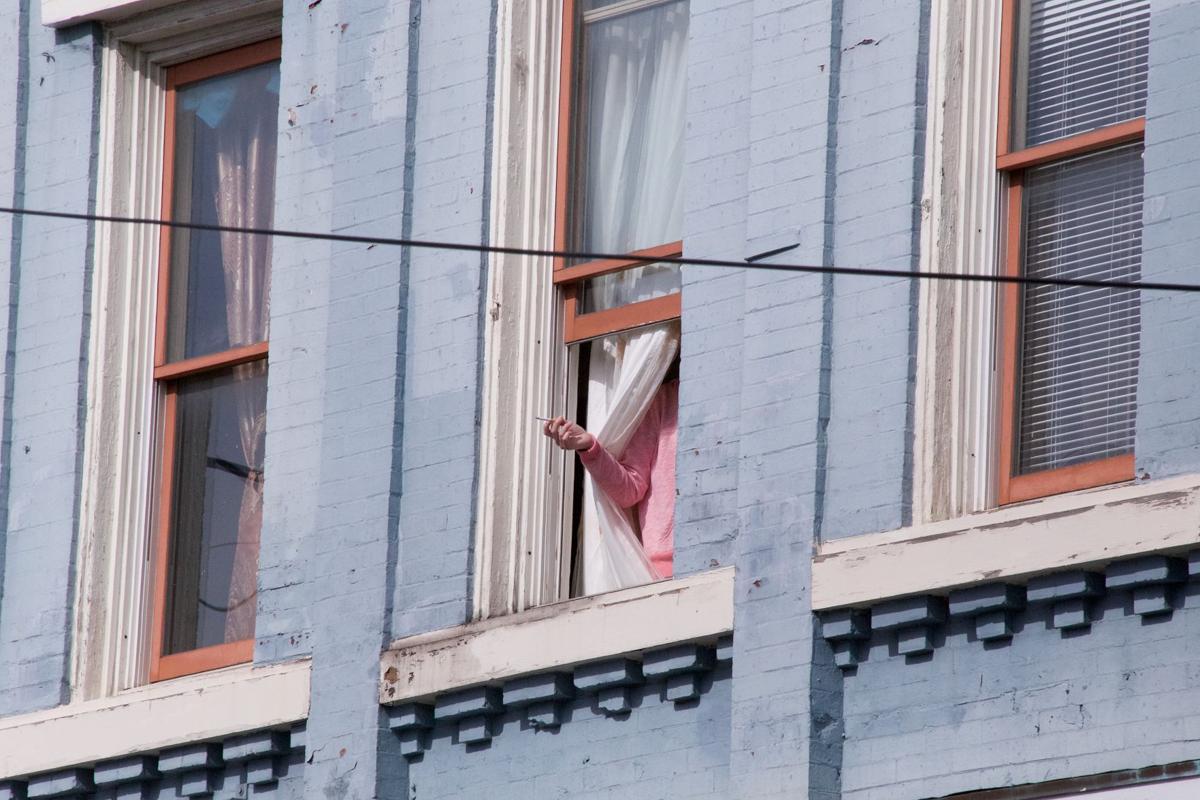 "First Blush" - a photograph by Scott Kreider is part of the "Ins & Outs" exhibit showing at Curio until Nov. 30. 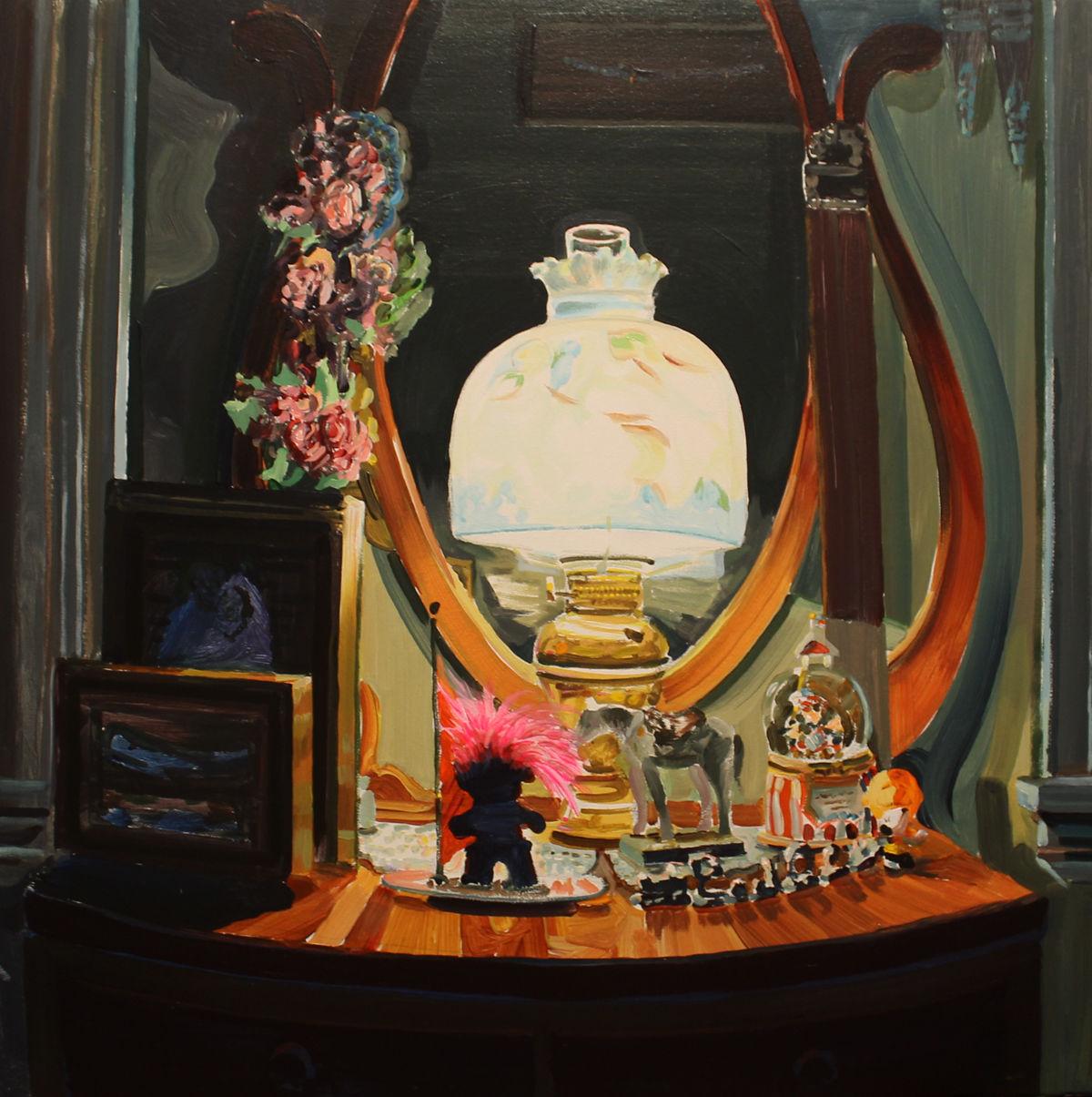 "One of Pat's Lamps" (2018) 32x32 inches, acrylic on canvas by Sean Hildreth. Hildreth has painted nearly every square foot of his family's early 20th century home in Cheltenham, PA. 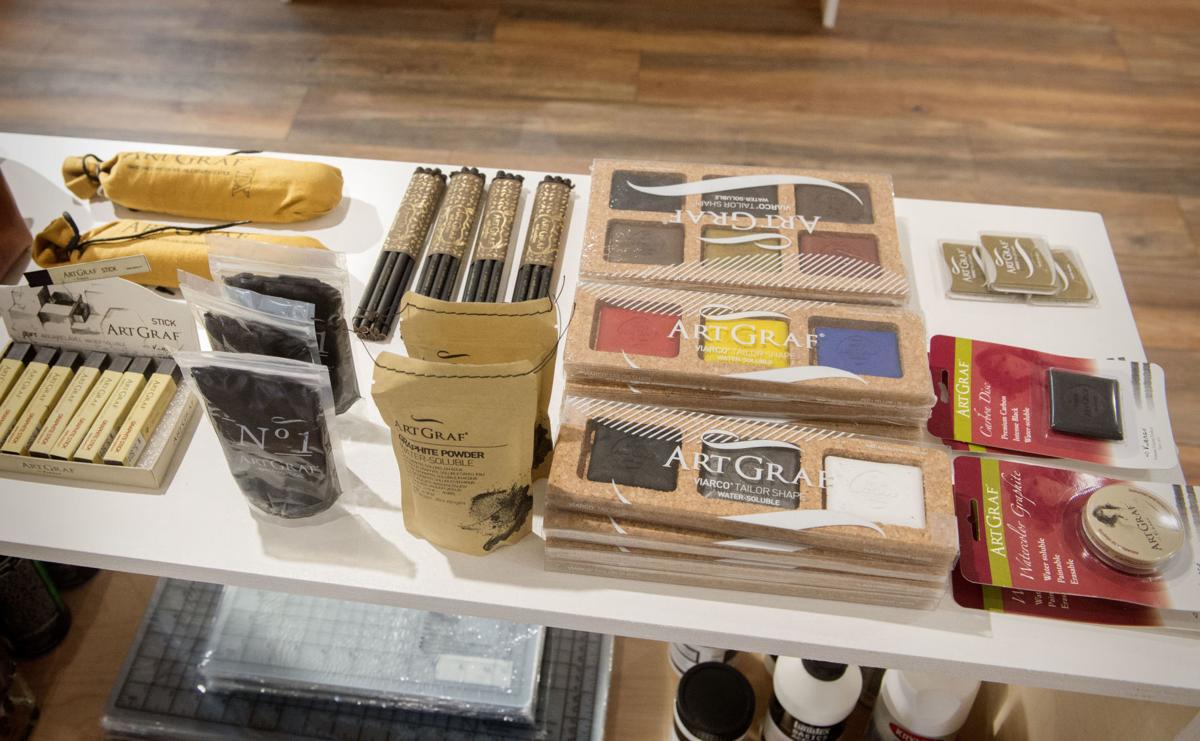 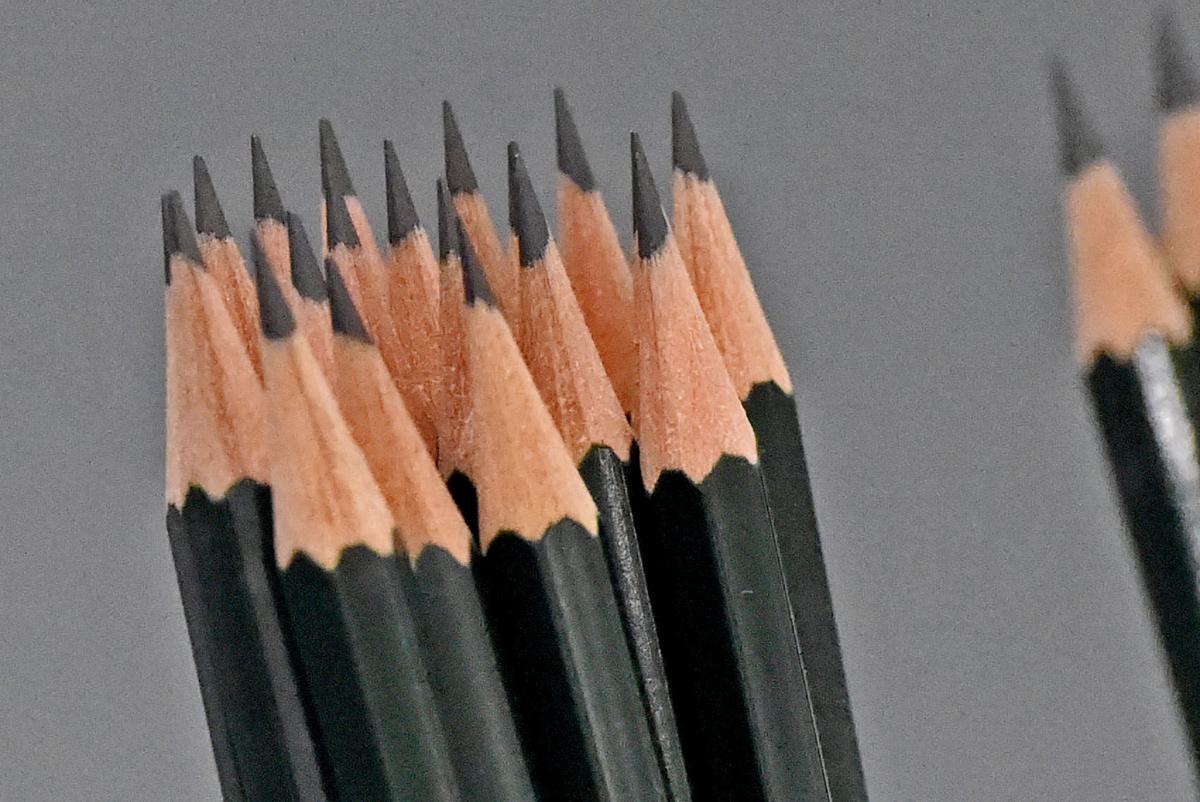 Drawing pencils are some of the supplies at Curio Gallery & Creative Supply 106 W. Chestnut St. in Lancaster city Friday, Oct. 26, 2019. 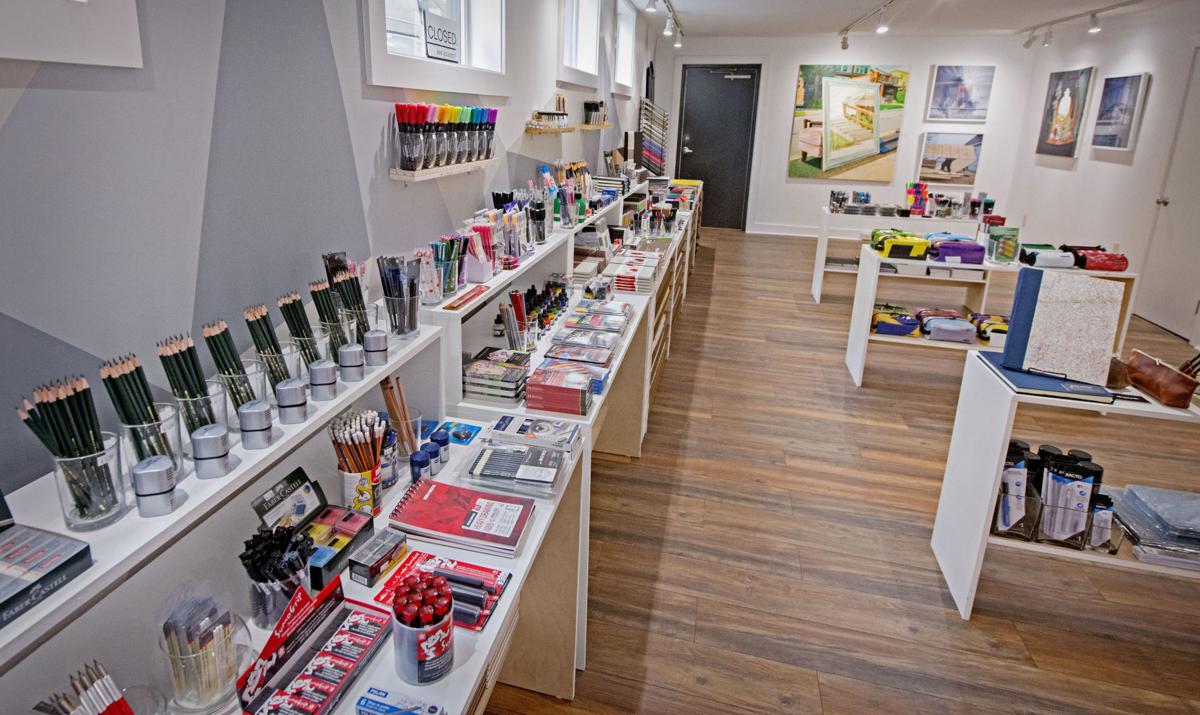 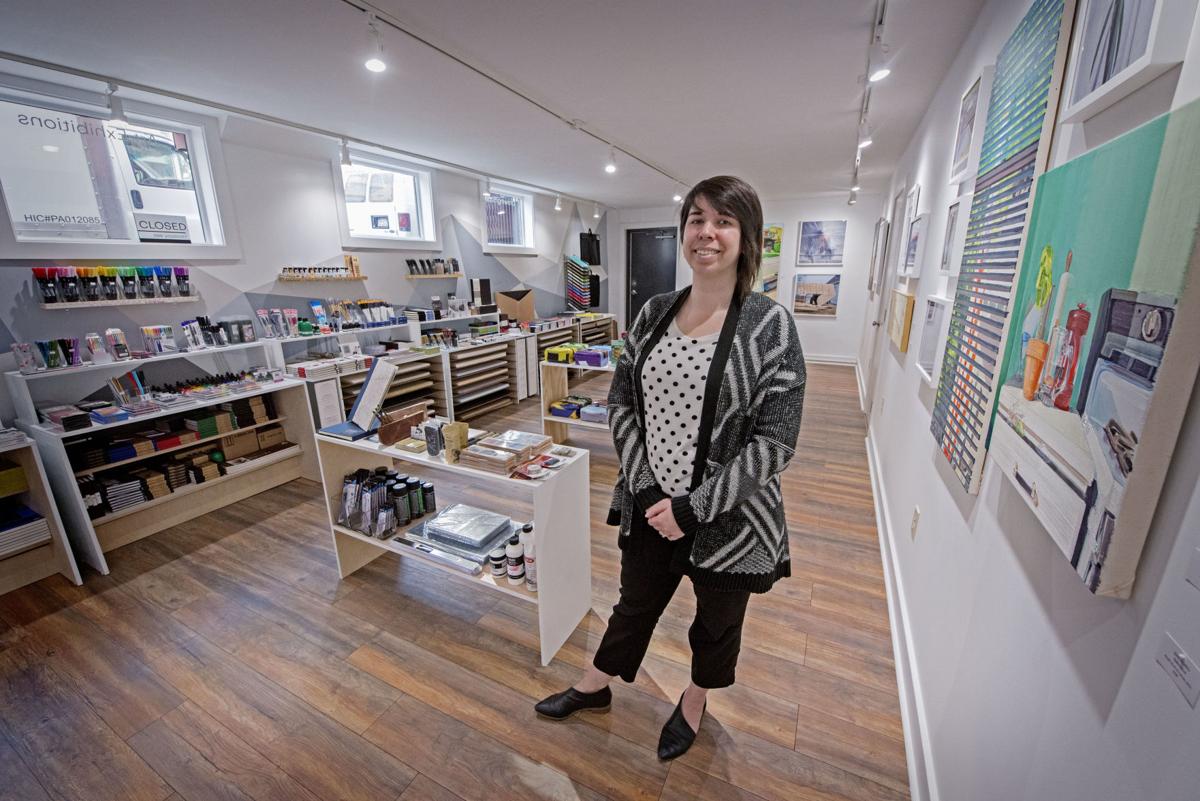 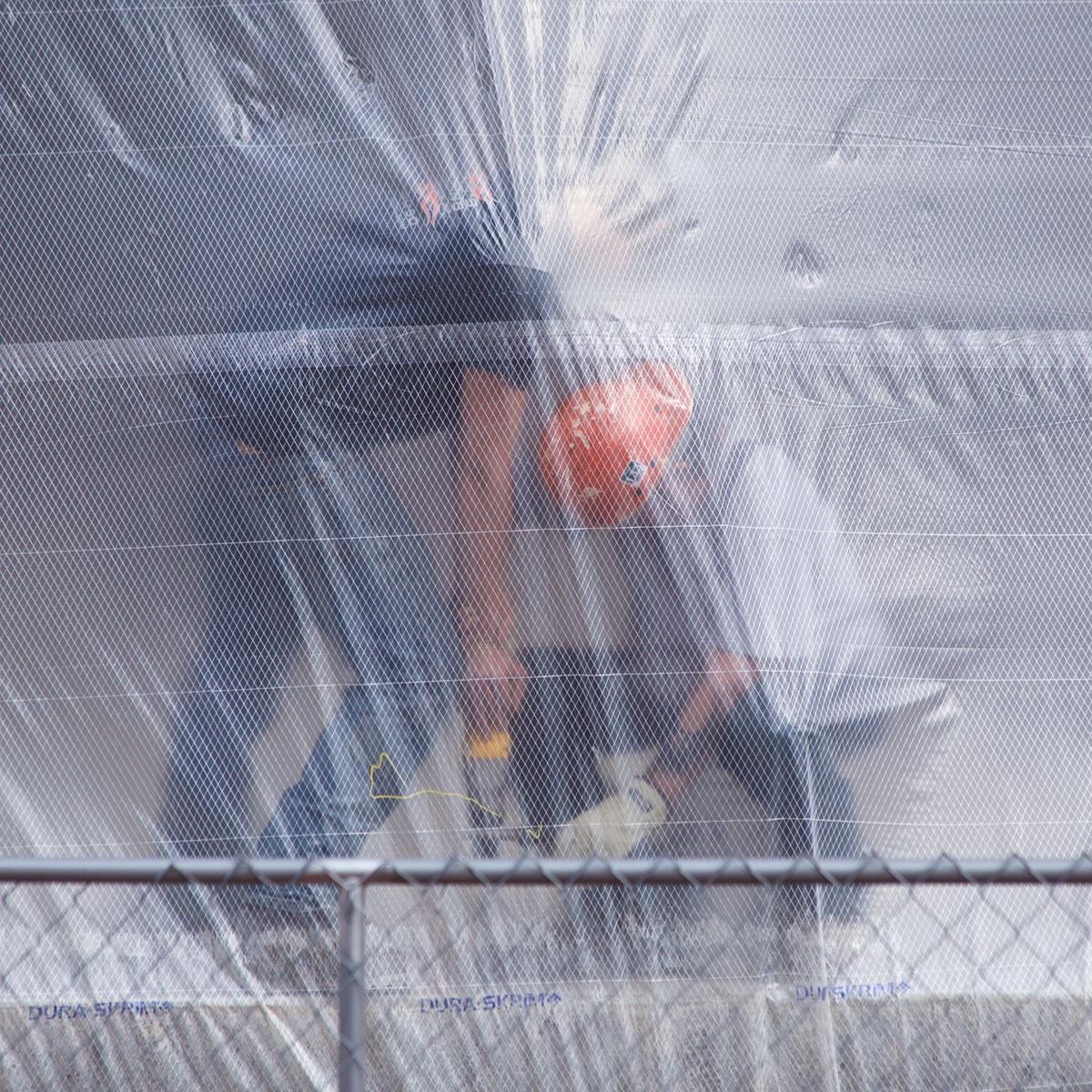 "Work 1" - a photograph by Scott Kreider is part of the "Ins & Outs" exhibit at Curio Gallery & Creative Supply. Kreider takes long walks and lets images jump out to him. This image of construction workers at 101 N. Queen struck Kreider. "My heart was beating after I got that photo," he says. "I knew it was exactly what I was looking for. That’s a place I’ve walked by like 100 times – more than 100 times." 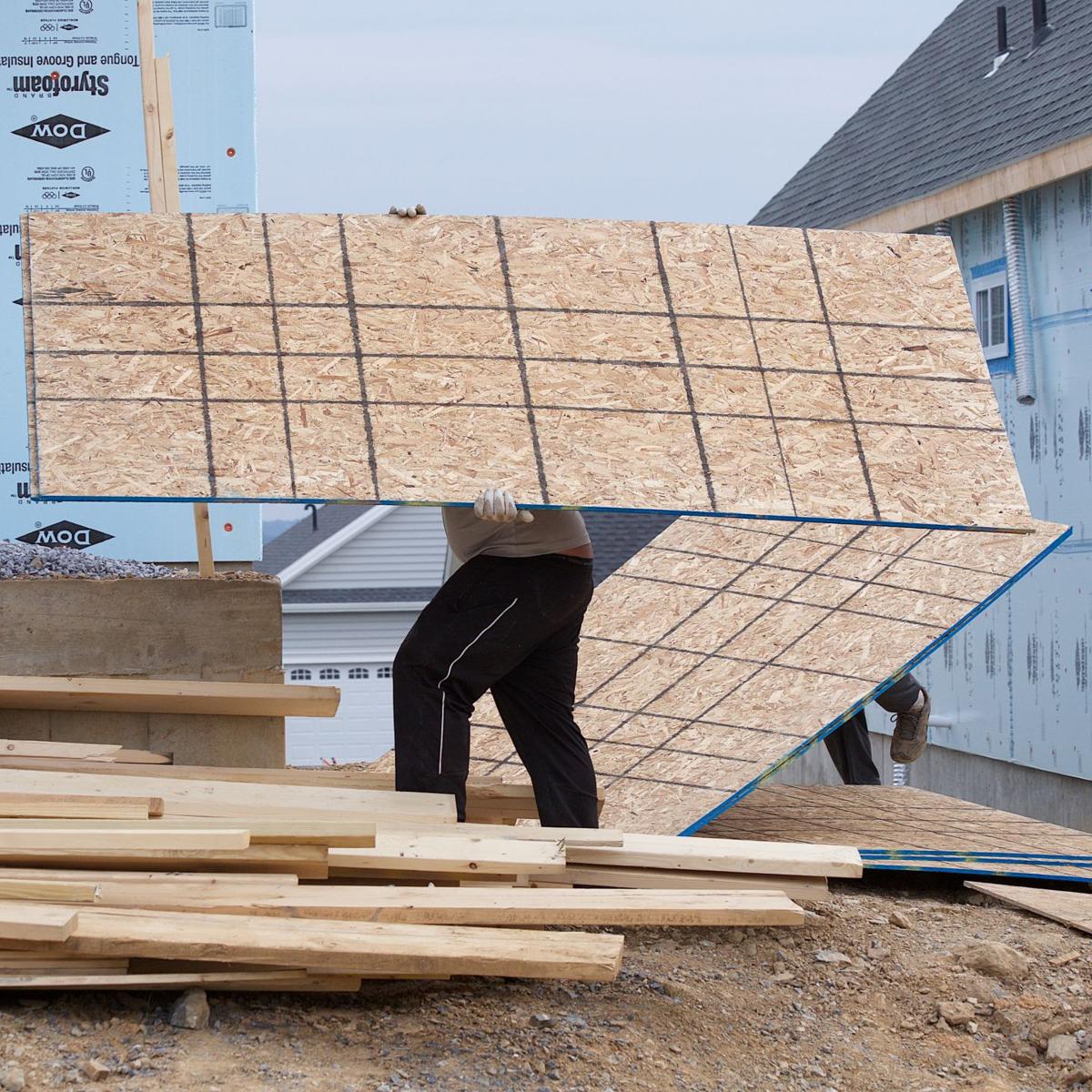 "Work 2" - a photograph by Scott Kreider is part of the "Ins & Outs" exhibit on display at Curio Gallery & Creative Supply through Nov. 30. 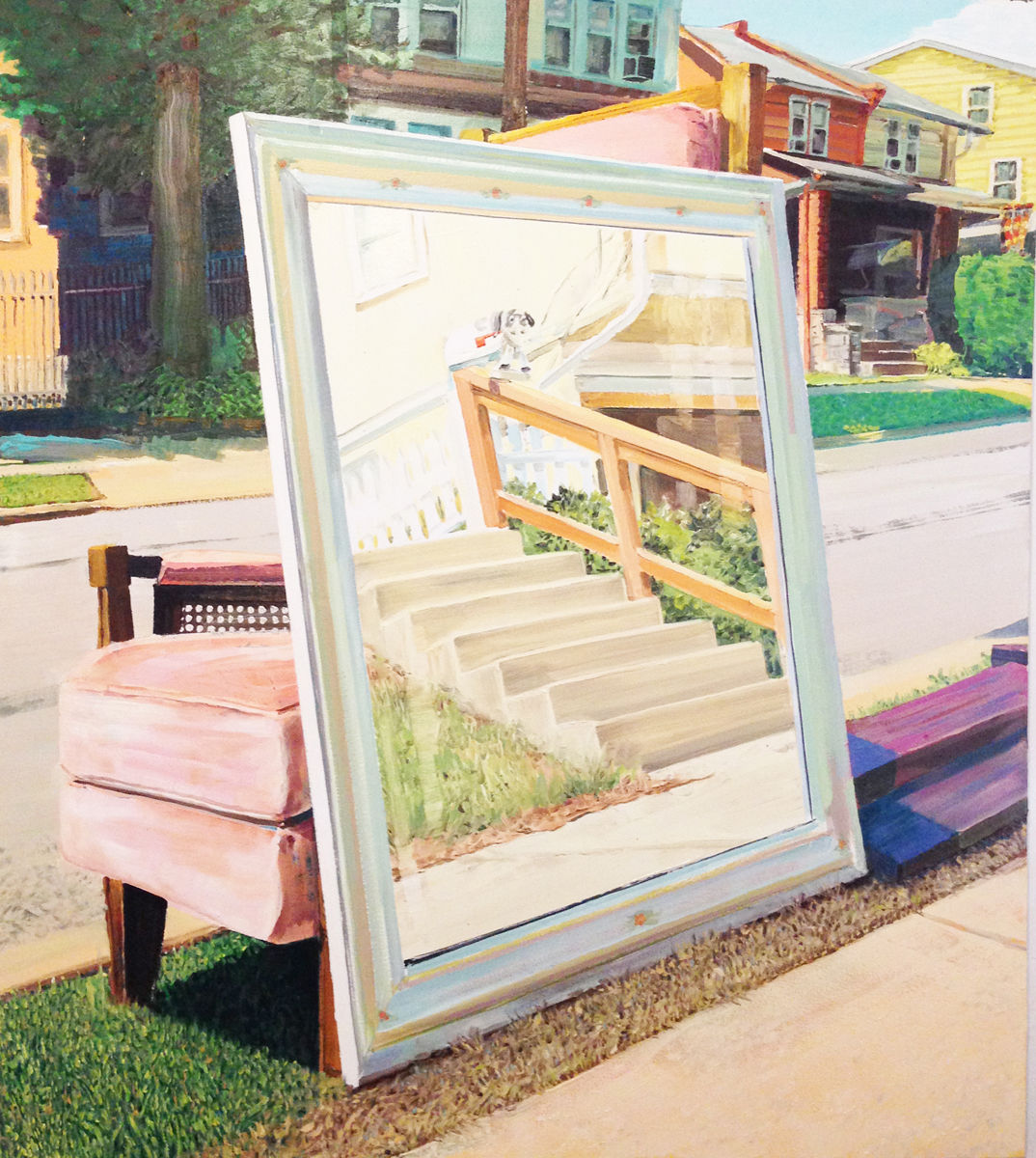 "First Blush" - a photograph by Scott Kreider is part of the "Ins & Outs" exhibit showing at Curio until Nov. 30.

Drawing pencils are some of the supplies at Curio Gallery & Creative Supply 106 W. Chestnut St. in Lancaster city Friday, Oct. 26, 2019.

One way to describe an artist’s job is to say they show us how to notice. To pause. To see things with fresh eyes.

That is certainly the case with “Ins & Outs: Selected Works by Scott Kreider and Sean Hildreth” at Curio Gallery & Creative Supply — the new gallery and art supply retailer at 106 W. Chestnut St. in Lancaster.

“Ins & Outs” features photographs by Kreider — a Lancaster-based photographer (and LNP correspondent) — and paintings by Hildreth — a Philadelphia-based painter. Positioned beside each other the line between painting and photography is blurred and surreal narratives emerge.

The subjects the artists favor are throwaway moments most people wouldn’t think twice about. But in Hildreth’s and Kreider’s eyes, some furniture on the curb or an envelope peeking through a mail slot become gateways to a mysterious world.

“This is what I think connects me and Scott so well,” Hildreth says. “His observation of a fleeting moment.”

“I love his eye,” Kreider says. “The things that he focuses on just really gels with my aesthetic. I feel like my photos are a little impersonal, but his paintings have an intimate feel.”

The name of the show can be taken not only to refer to the interior and exterior scenes presented in the work, but as an invitation to look inside and outside of yourself and to feelings of intimacy and separation.

“I want to capture that alienation of looking through the lens and taking a picture,” Kreider says.

If Kreider emphasizes the photographer’s essential “outsider-ness,” Hildreth’s paintings complement it with his sense of familiarity. As Matt Chapman, co-owner of Curio puts it: “Making a painting is like being in your own home.”

Hildreth literally invites you inside his home with his warmly colored acrylic-on-canvas paintings. He’s painted nearly every square foot of his family’s early 20th century home in Cheltenham — a suburb of Philadelphia. In a few weeks, Hildreth says, the family will have one last powwow before the house is sold. Hildreth’s painting “Curb Appeal,” featuring a mirror reflecting the stairs of the house and, obscured behind the mirror, a pink chair, is one of the paintings of the house.

“That was my grandfather’s chair,” Hildreth says. “This was a day where me and my dad were like ‘We have to finally get rid of this thing.’ It’s just this emotional thing.”

Another interior of the house “One of Pat’s Lamps” shows a troll doll, a snow globe, a lamp, and a mirror. Hildreth credits his parents for this collection of “curated crap” that they assembled as they were packing up the house.

“They had no idea what they did, but it’s great,” Hildreth says. “I’m obsessed with ‘Toy Story,’ so I place life into any inanimate object.”

And, despite the focus on objects, there is a lot of life in Hildreth’s paintings. The objects may be the Hildreth family’s knickknacks, but everyone has an emotional connection to “their stuff.”

“People don’t have that exact conglomeration of stuff,” Hildreth says. “But you might have nostalgia for that troll, so it flips the switch for you that way.”

This sense of emotional response to random objects is a link to the two artists.

“I even joked on the phone (with Kreider) ‘I think that we were separated at birth,’ ” Hildreth says.

The images on display in “Ins and Outs” do have a siblinglike quality to them. There are a few pieces that blur the line between the two mediums, which isn’t to say Hildreth’s work is extremely photorealistic or Krieder’s photos are heavily edited until they look like paintings — it’s more about the choices the artists make. Some of Kreider’s flash photography gives his work a flattened, disorienting quality, and Hildreth’s paintings are like impressions of snapshots. The work, as Curio co-owner Chapman points out, has many parallels including shape, composition and other formal elements.

Kreider became interested in photography while teaching English in South Korea, and sees traveling as a key to developing his eye for finding powerful, but overlooked images.

Kreider notes that a big part of his process is simply walking.

“I spend a lot of time going on walks in the city,” Kreider says. “It’s like how a painter works the paint until their vision emerges. For me, I’m just waiting for my vision to emerge from reality.”

Kreider takes a documentarian approach to his photographs and does minimal editing. He is capturing candid moments. There are people in his photographs, but they are mostly obscured. It’s anti-portraiture.

“If a person knows that I’m taking their picture, I think it’s ruined,” Kreider says. “It becomes a presentation, and I don’t like that.”

Nearly all of the photos on display at Curio are taken in Lancaster County, but you won’t see any Amish scenes or farmland. Most of Kreider’s work was shot in the city.

“One of my goals was to show a different side of Lancaster,” Kreider says. “I just didn’t want to do something that everyone thinks of. I also want the photos to be relatable to a much broader audience. Not so focused on the locale. These pictures could be anywhere.”

Much of Kreider’s work is posted to his Instagram account, and Hildreth posts images of his paintings on his website, but as Nicole Chapman, co-owner of Curio notes, seeing the work in person is different than scrolling through images online.

“It’s transformative to see them framed and hanging rather than on a screen,” Nicole Chapman says. “There is time to pause.”

Pennsylvania College of Art and Design celebrates diversity in art

The assemblage artist's work runs through the end of January.