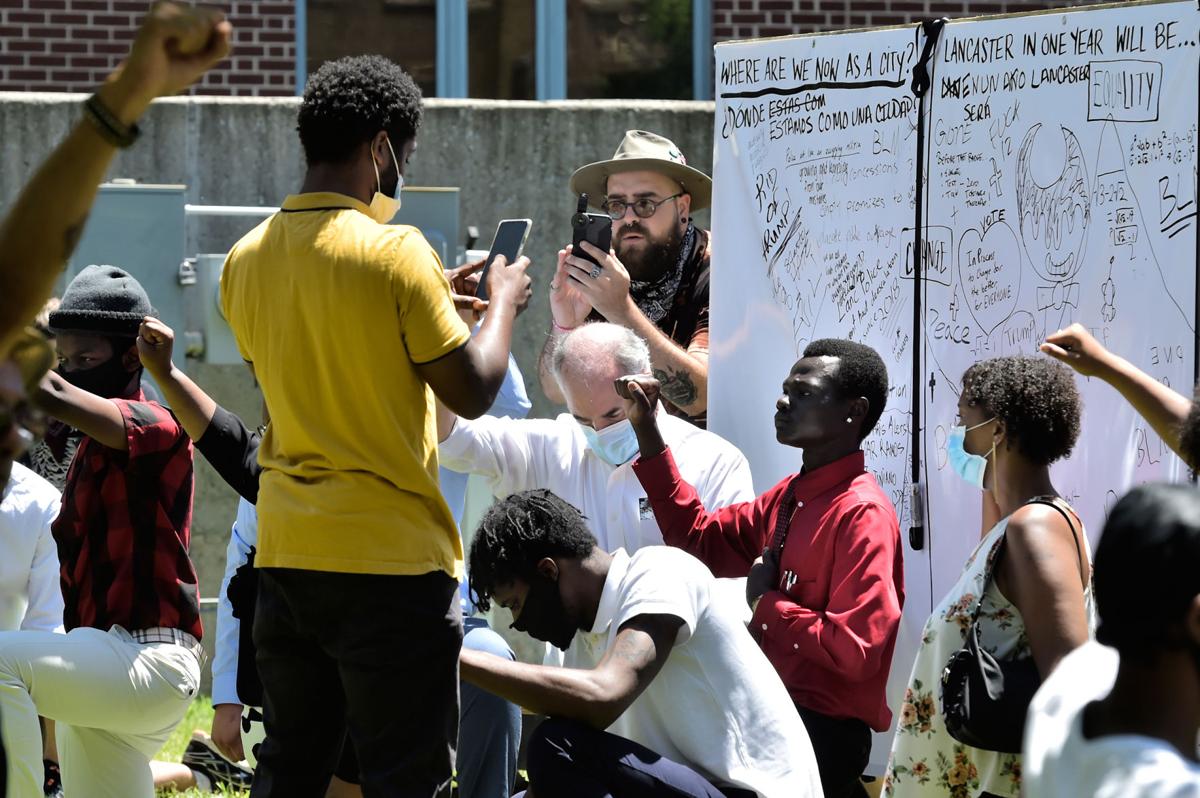 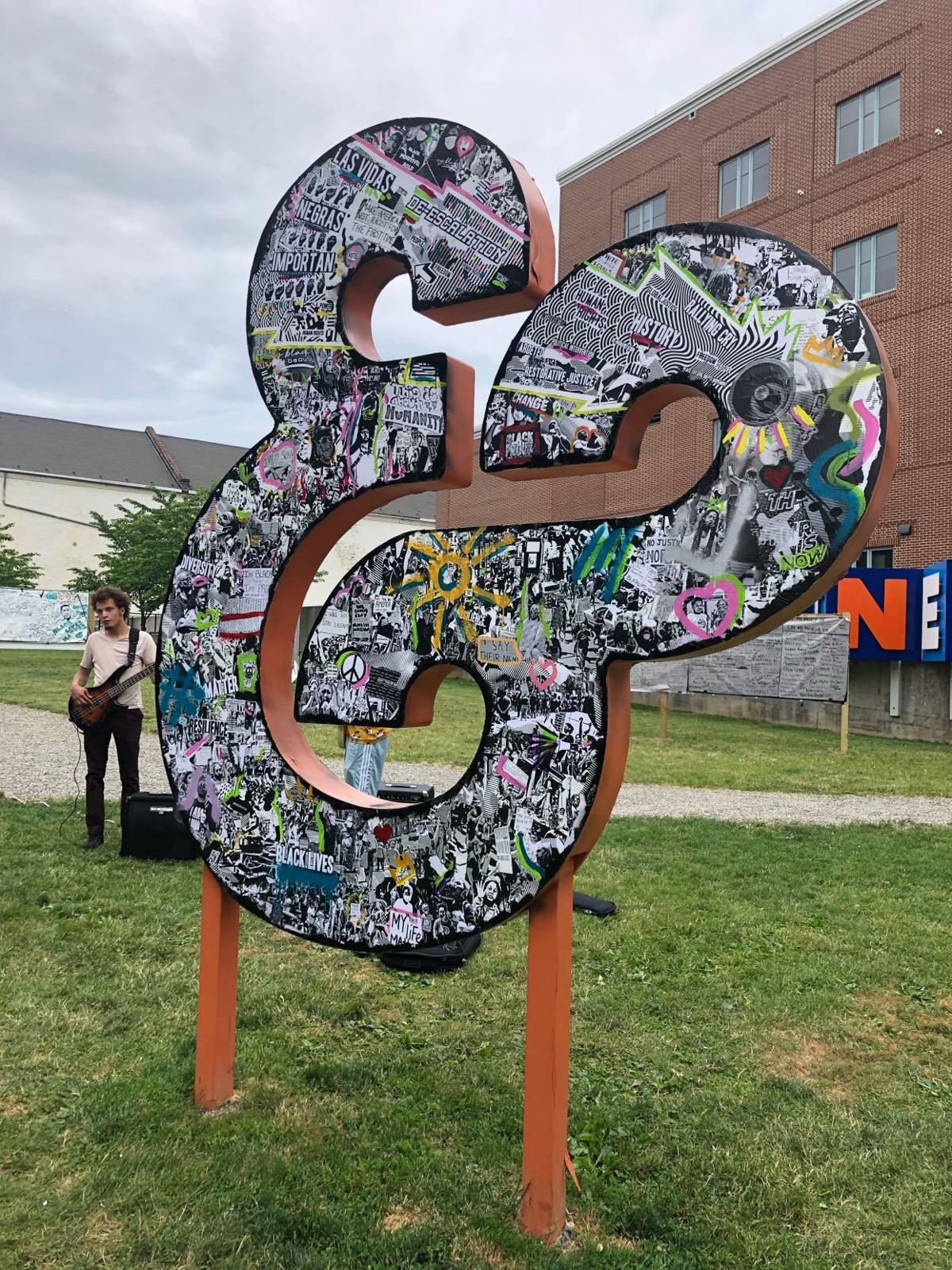 Pennsylvania College of Art & Design's Art Park, located at the corner of Prince and Chestnut streets in Lancaster, has become a hub for community rallies and protests. 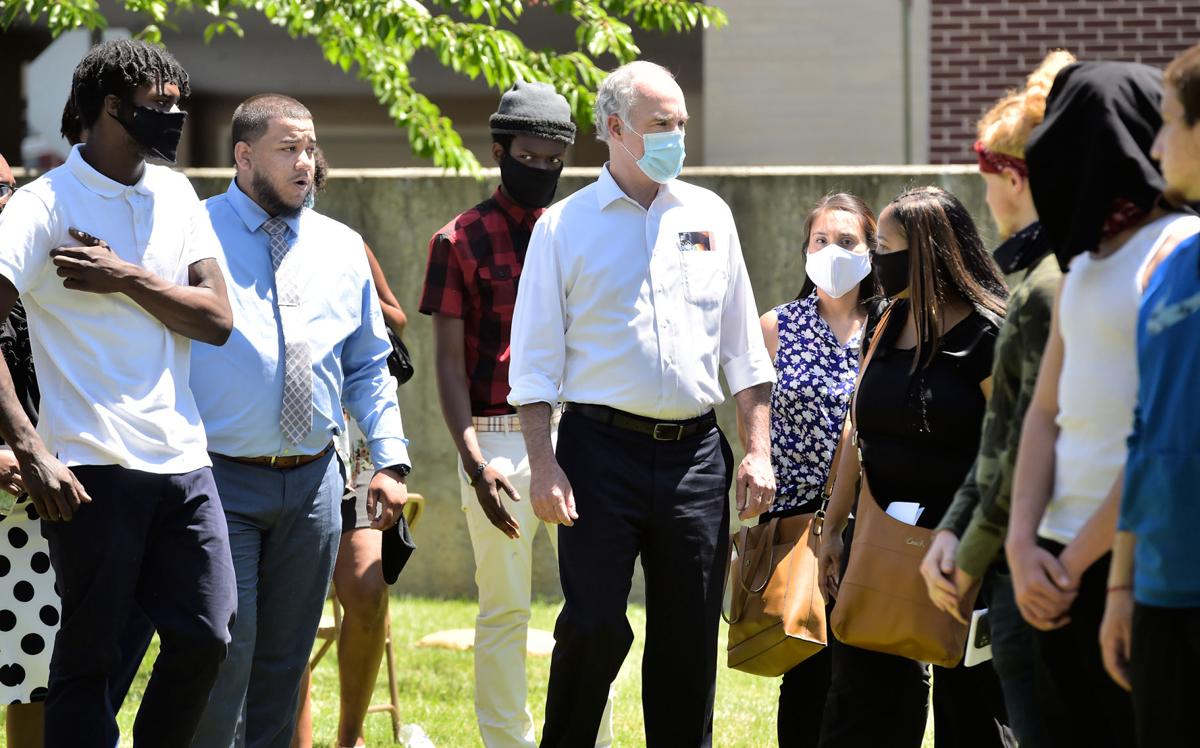 Over the past month, a park owned by the Pennsylvania College of Art & Design has become what it always seemed poised to be — a platform for free expression.

The Art Park, a 12,000 square foot space at the corner of Prince and Chestnut streets in Lancaster, has transformed into a hub for community protests and demonstrations as part of the Black Lives Matter movement following the death of George Floyd.

“It’s almost like seeing a civilization gathered together really trying to start to rebuild itself,” said demonstrator Malcom McCray, 23, of Lancaster.

Organizers say they like the space for its open, grassy and central location. The close proximity to the police station and city council members add to the park’s appeal, with some noting the irony of protesting right under the watch of police officers, who are at the heart of many complaints from the movement.

Its central location also helps protesters reach more people with their message, activists said. As groups gather in the park, chant and hold up signs, passersby honk and shout encouragement. A few raise their fists in solidarity.

Jessica Lopez, 32, of Lancaster, and a group of organizers have planned marches and rallies at the park. The demonstrations, she said, are meant to show everybody “that they are welcome in our city.”

Lancaster city's public arts manager, Joanna Davis, said the police officers and chief have been seen looking over the list of the demands and the artwork in the park.

Lopez said she would even like to see council meetings held at the Art Park to make meetings more accessible to the community.

How it came to be

The park was imagined in 2003, when the art college proposed the space as a temporary art garden next to the then-newly built Lancaster police building on Chestnut Street.

It was owned by the city until 2012, when the college purchased the lot situated directly across from its campus.

“The Art Garden was imagined as a place for ‘convocation,’ creative gatherings to engage the Lancaster Community,” college President Michael Molla said in an email.

The college chose not to brand the park with its own name but instead decided to allow the space as a place for art that exemplified the college’s mission to create.

As early as 2011, the park became a prime location for the Occupy Lancaster movement, with protesters calling for an end to corporate greed. The Occupy movement spread globally in 2011 in opposition to social and economic equality. Protesters camped in the park for more than three months. In 2012, Occupy Lancaster returned to protest the 2012 National Defense Authorization Act.

In 2014, after years of discussing the park’s purpose at city council meetings, the college erected a sculpture on the side of a city-owned wall that reads “influence” or “create,” depending on the viewer’s perspective.

Noting that the park was still greatly lacking art, in 2018 the college added a silver ampersand as a symbol of “forging, building and deepening connections.” The ampersand, which stands about 10 feet tall, was built for Molla’s inauguration.

Lancaster County Community Foundation recently paid for artists to repurpose the Art Park’s ampersand to honor the Black Lives Matter movement, put up murals and signs for the community to list their demands and expectations for the city.

“It really was a place to just supply a venue for demonstrators to articulate what they’re feeling,” said Davis, the city's public art manager.

Lancaster resident and artist Keisha Finnie, 28, recently decorated the ampersand and designed another mural currently in the park. A recipient of the foundation's funds for her work, Finnie said she hopes the space can “continue to be used for for matters like this. And I want to see other artists or other communities, other organizations coming into this space as well.”

Molla said he supports those who have created, what he called, “this organic initiative call for social and racial justice” in response to Floyd’s death.

“Rather than a place to be reflective,” he said, “our Art Garden is serving as a locus of engagement that is productive, not divisive.”

Who is behind the scenes of Lancaster County elections? A look at who ensures the safety of your vote

Why baked cookies sometimes are flat, how to prep cabbage for slaw and more cooking advice [Front Burner]

Rainbow flags hung Friday evening, eclipsing decorative signage in the Art Park outside of the Pennsylvania College of Art & Design in Lan…

'A breath of fresh air': Lancaster residents, businesses band together during the pandemic [Good News Roundup]

In such uncertain times, it’s easy to feel pessimistic.

Since late May, protesters have taken to streets throughout Lancaster County to fight racial injustice.

When Reenie Chase thinks of murals as home decor, her mind travels back to the chateau in the South of France where she once lived for a year.