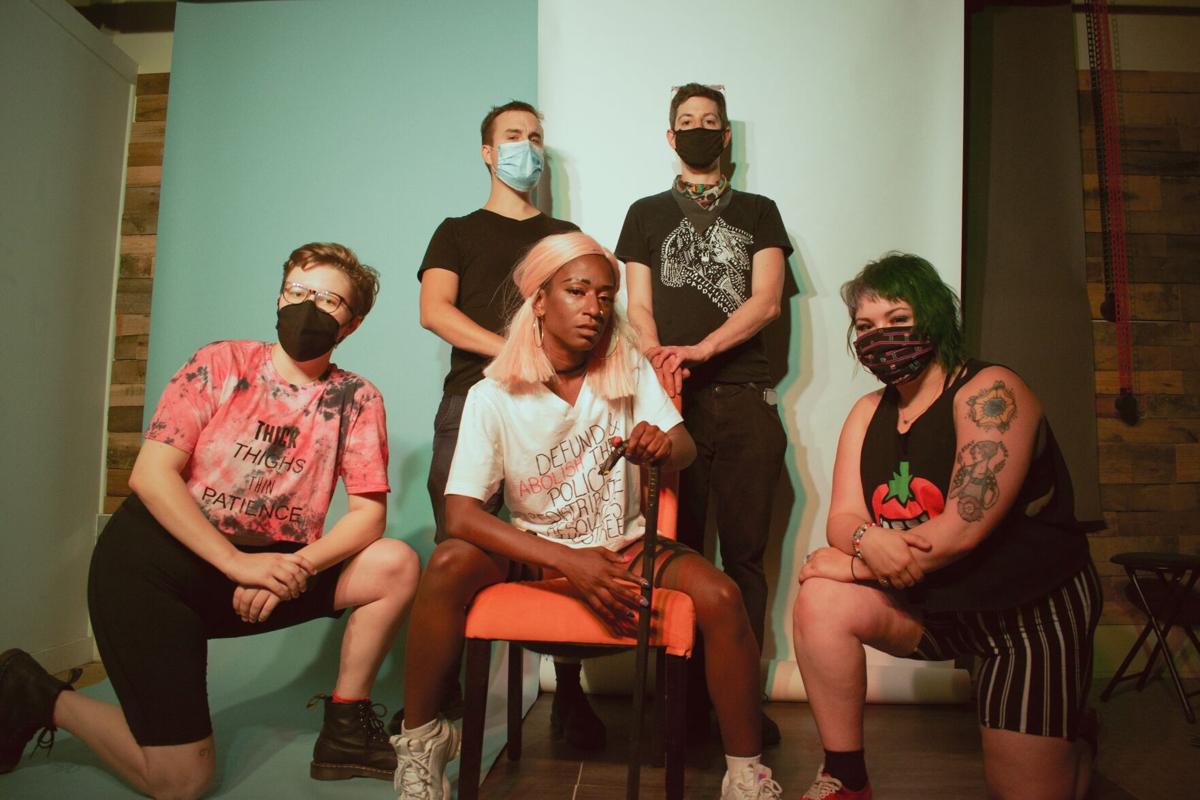 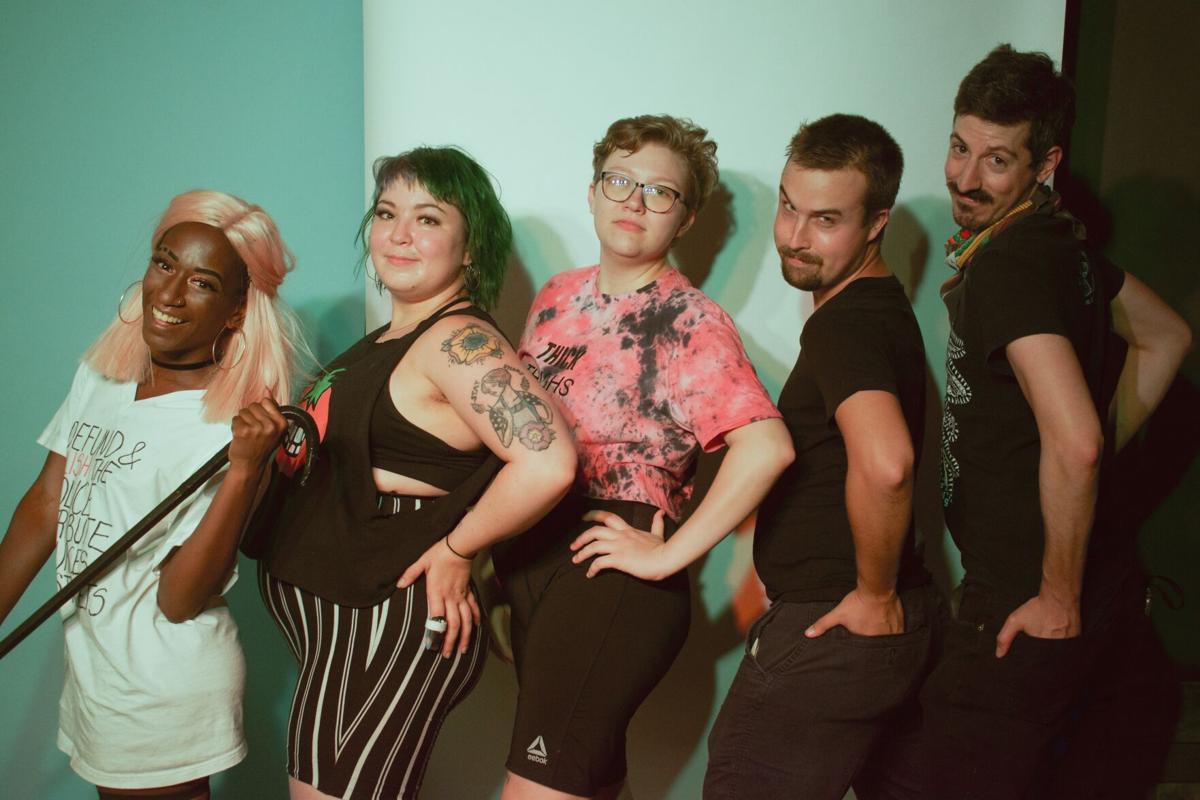 When the band Nice finished playing its first song at “SOCA Fest,” a cover of Regina Spektor’s “20 Years of Snow,” they were met with silence.

That’s not because of the bands’ transfixing, cacophonous sound.  Nice (stylized as "NICE") recorded a live set as part of the July 18 event at Lancaster’s Station One Center for the Arts without a live audience. The event gathered dozens of performances recorded live and premiered virtually. It was the band’s first show since a February set in the same space, and its first in its newest incarnation. Even though the world feels like it has changed significantly since that February performance, the feeling between shows has not diminished.

The set served as a virtual premiere for a band that spent its first year and a half figuring out its sound and lineup. Though the band is individually based in the Harrisburg area, the band has mostly played in Lancaster. In the live video, Nice appears fully formed, firing on all cylinders as if they had been playing together for several years.

Here's when the Pa. Renaissance Faire will open for its 40th season

It wasn’t always that way.

“The first iteration of Nice did not vibe,” says Nice vocalist and lyricist Riss Stoner, over the sound of laughter from the rest of the band over a Zoom call. “We were just very awkward as people, in general.”

The band initially formed out of conversations in late 2018 between Stoner and Nice drummer Jake Umberger about what sort of band they might start. Stoner has been a vocalist all her life, though more in a pop and jazz style. So when the pair eventually settled on what would become the punishing sound of Nice, Stoner had her doubts.

“It’s very different doing a project like this. At first I was kind of like, ‘This isn’t going to be sufficient enough for me, you know, I’m a vocalist, I’m so much better than this,’ Stoner says, laughing. “I didn’t know how everything was going to turn out and how much I would absolutely invest myself in this band.”

NICE_SOCA_Print_2_Unbranded.mp4 from Station One Center for the Arts on Vimeo.

‘Voices who weren’t heard before’

The band as it appeared in the SOCA set consists of Stoner and Umberger, as well as Chase Price on bass, Cam Lamberson also on bass —more on that later — and Hannah Espensen creating additional noise with a microphone and varied effects. The combination of extreme low-end (dueling bassists and Umberger’s tom-heavy drum style), with the attention-grabbing high end (Stoner’s piercing vocals and Espensen’s wailing noise effects), creates a wholly original sound, certainly so in Lancaster County.

“We’re just the voices who weren’t heard before, people who look different than people who dominate that industry,” Stoner says. “Like, indie music is dominated by skinny white boys, but I know plenty of badass Black women who rock the hell out of an indie song. It’s wild how much politics makes its way into art and creation.”

Perhaps the centerpiece of Nice is Stoner’s lyricism, which is used as a bludgeon against topics ranging from police violence against Black people to abortion rights.

“One of the conversations Jake and I had when we started the band was me saying, ‘Well, it’s really just going to be a band where I write about everything that I’m mad at,” Stoner says.

As you might expect from a band sick-to-death of the system in 2020, most of the memorable lyrics can’t be printed in the newspaper, but they’re suitably raw.

And yes, right, the two bassists thing — at one point, Price wasn’t sure if his schedule would allow giving the band the time it deserved, so the band began looking at other bassists, with the idea in mind that Price would stay on to help the new person. After enough time passed, Price’s schedule changed, but Lamberson was already “in” and practicing parts. True to the inventive nature of the band, they decided to run with it.

“Honestly, it took a lot of pressure off of me,” Lamberson says. “Chase writes insane bass lines, just absolutely wild, so anytime I wasn’t sure about something, it was like, ‘Well, we have two basses and we’re a noise band, just do weird stuff.”

In Espensen’s case, Stoner asking her to join the band represented the first time she had made music, period.

"One night I called Hannah and was just like, ‘I know you’ve never played music in your whole entire life, but we think you’re weird — do you want to be in our band?’” recounts Stoner.

“Music isn’t my normal creative outlet, so I went into it with a ‘Why not?’ mentality,” adds Espensen.

Just as Umberger and Stoner were forming Nice in late 2018, the pair went to see the musician C.J. Boyd at Tellus360 and got to talking with him.

“His rule is that he’ll only play with bands that have people of color or women in them, and I thought, ‘Why have I never thought of doing that before? That’s the best idea,’” Stoner says.

Though Nice has played few shows since starting up, they’ve largely stuck by that rule.

"We kind of just do it naturally. The idea is that we’re abolitionists, so we believe in abolishment of things that currently exist that aren’t working for everybody,” Stoner says. “Me specifically, being a Black woman growing up in a music community that didn’t have people that looked like me in it, it’s hard to place yourself sometimes feeling comfortable, feeling like you’re protected or stood up for. One thing that took so long when the band was starting was that Jake and I would go to shows and he'd be like, ‘That was a really good night!’ and I’d say, ‘Well, this happened, and this happened.’

Stoner says she’s proud of the way Lancaster has taken to Black Lives Matter protests and the social justice groups that have spawned in their wake. Lancaster’s music scene, itself a microcosm of a microcosm, still has some work to do.

“I am surprised at the amount of people who go to a Tuesday show where they know only nine people are going to be there and they’re going to wear their band tee and say, ‘We’re different, we’re exciting, we’re off-brand.’ But then when it has to do with the lives of people who are off-brand without the ability to change that about themselves ... it’s like choosing to be different is propped up, but being born different and not having access because of that is not,” Stoner says.

The band’s stops and starts are not marked strictly for musical reasons —when George Floyd’s death created a groundswell of protests across the world, Nice took to the streets.

“As soon as the protests started, all of our focus as a band shifted entirely to that,” Umberger says. “So it didn’t feel like, ‘Oh no, the band is on pause.’ It felt like we had important work to do in the meantime.”

As of this writing, Nice has a single three-song demo on Bandcamp that its members confess doesn’t represent the sound of the band currently, but is certainly indicative of their true collective power. A full-length album will come eventually, just as the return of live shows means that people will be able to experience a living, breathing Nice set instead of simply viewing it on a screen.

“I feel like coronavirus clearly has been more bad than anything, but if we’re going to take positives from it, I would say the one thing that we’re learning is how much we really control our world and our strength to change things and move things in a direction that works for everybody and not just a select elite,” Stoner says.

She’s noticing the change not just nationally, but locally.

“And I think you see that, not just in the police and the different political systems, but you also see it in smaller things like our music scene,” Stoner says. “They’re just mini systems to prop up one person or one thing, or one type of person or type of music, and to be able to have an opportunity like this to get rid of all that and start over is great. Who needs it?”

Keep up with Nice by following the band on Facebook here.

The one-night version of A Taste of Lititz, which before the COVID-19 pandemic brought hundreds of people to the borough’s downtown each June …

A flash flood watch has been issued for Lancaster County Thursday morning, beginning at 11 a.m. and ending at midnight, according to the Natio…

The Dutch Apple Dinner Theatre, which reopened Aug. 7, on Sunday launches a series of concerts paying tribute to the music of various artists …

Though the MI Foundation can't hold its annual summer concert in person this year, the nonprofit is getting a hand from Rock Lititz-based mark…

Friends of Kari Shirley say that she could always be found on the dance floor, swaying to the sounds of local musicians such as Dillweed, Leo …

On the occasion of Laddie Moran's new Ep "Cry Baby," we spoke with the Lancaster rapper about what went into the creation of his new music.

In her 13th year as music director at Redeemer Lutheran Church in Lancaster, Leigh-Ann Powers isn’t willing to put a hold on making music duri…

Throughout 25 years in live theater, from the box office to acting and directing, Starleisha Gingrich has almost done it all.

When it comes down to it, was 2020 really a good year for anything? The most positive spin you could put on the year is that it gave some peop…