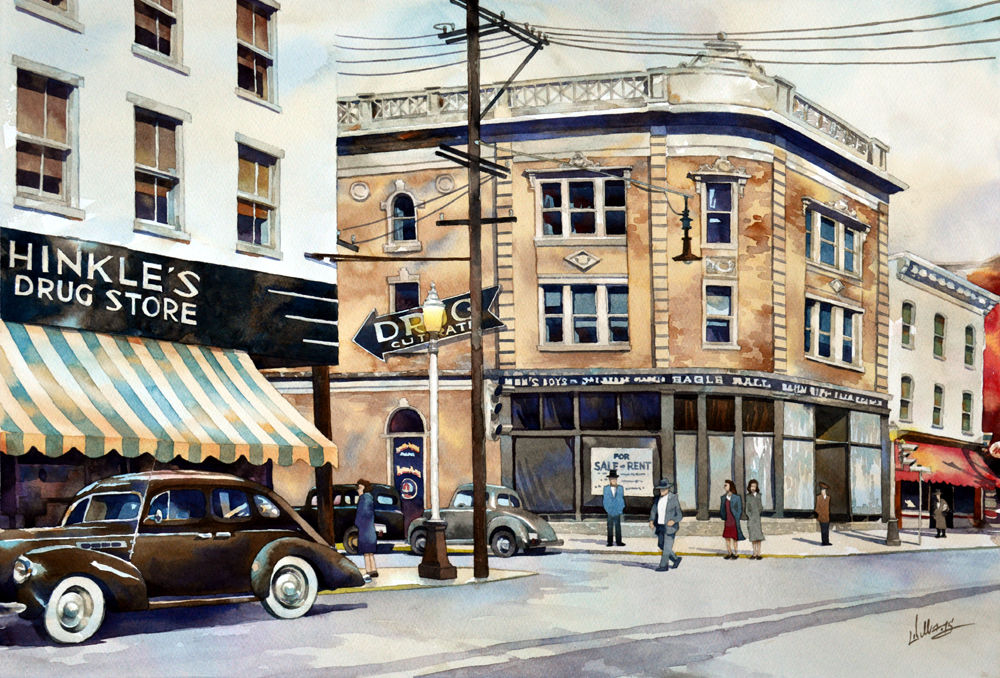 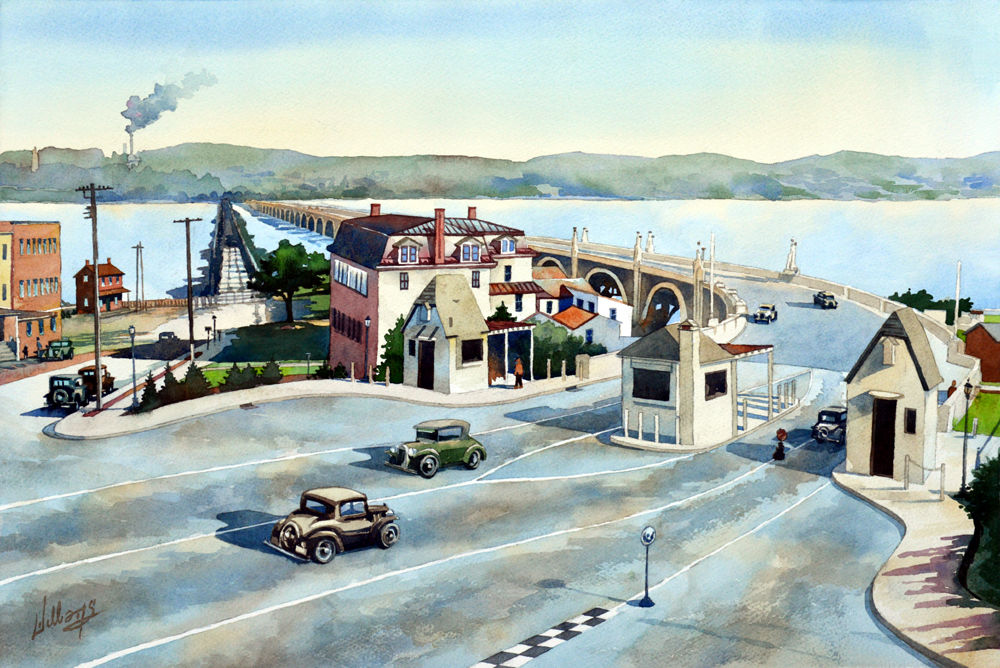 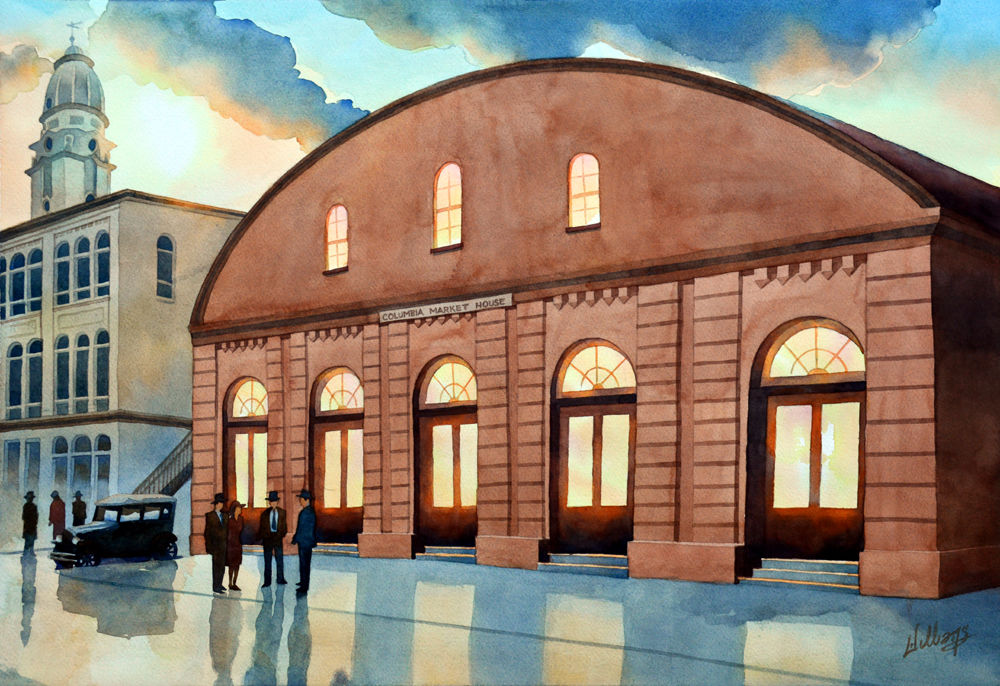 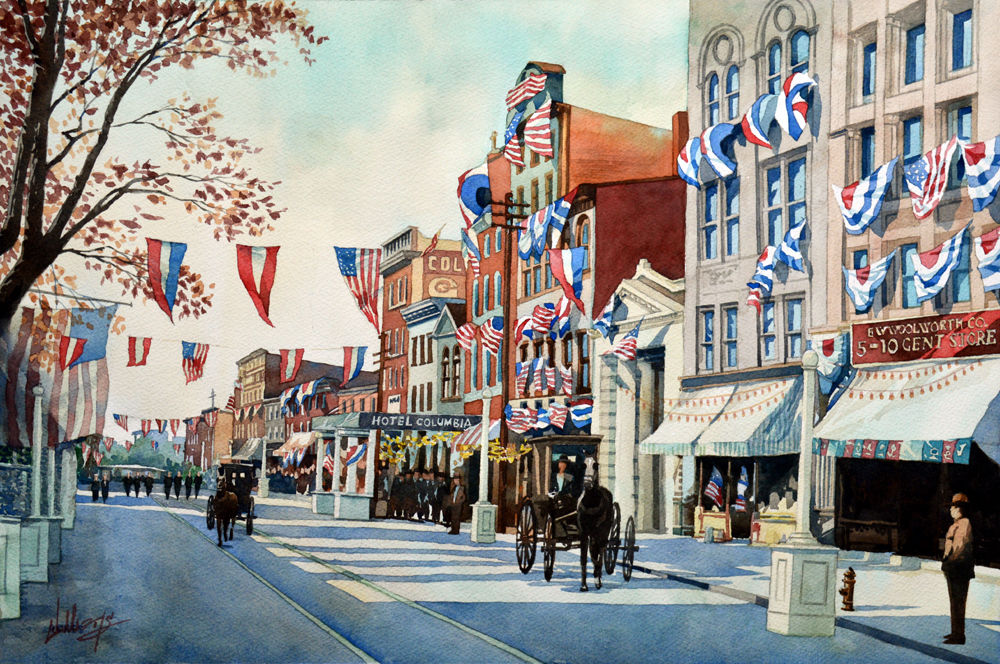 Some artists have found creative inspiration from what’s inside a bottle of beer, but for New Market, Maryland-based artist Mick Williams, it was what was on the outside of a beer bottle that inspired him to create a watercolor series of vintage Columbia scenes.

The inspiration struck Williams while on a tour of childhood friend Mike Knaub’s soon-to-be-open brewpub, Starview Brews on Locust Street.

“I was looking at the labels of the beers he’s created,” Williams says over the phone. “They’re all archival photos of Columbia and the photos are awesome, so that kind of triggered my idea.”

The vintage photographs led Williams to create a series of watercolor paintings based on Columbia’s past. The watercolors are on display at Columbia Crossing through June 30.

The paintings, which Williams finished within a year, bring life and color to the sepia-toned nostalgia of the archival photos. Williams’ use of light and shadow are brilliant and the tight lines of his street scenes and buildings showcase his passion for architecture.

Williams, originally from York, is attracted to the vibe surrounding Columbia — particularly the city’s architecture.

“I like the fact that it’s on the water,” Williams says. “It’s got this bohemian vibe to it. There are a lot of old buildings. I’ve always been an architecture buff, so I embraced that. I love the old wood with the brick and the trees and the business signs. It’s appealing.”

The paintings are rich with detail. Williams put his skills for hand-lettering to great use. (His painting of the old Hinkle’s Drug Store is a great example.) Williams developed his lettering skills from his years filling in thought and word bubbles for his short-lived syndicated cartoon called “Morons with Money.”

“I really enjoyed doing it,” Williams says of his cartoon strip. “But it never really sold. It really honed my art skills. My pen and ink skills really improved and also my figure drawing. Like if you’ve ever seen ‘Calvin and Hobbes,’ there’s a lot of action in that and I tried to put in the figures in the paintings as much as I could.”

A quick trip through Williams’ website shows the painter does more than just landscapes. He occasionally employs a touch of surrealism to his work.

“I don’t want to be just a landscape painter,” Williams says. “Every artist should just embrace creativity and be like ‘it would be fun to do this and just try it.’ ”

Williams’ skies, puddles and shadows show his love of abstract shapes, while his buildings show off his ability to be extremely tight and precise.

“When you do a painting, you have to look at a scene and break it down into those major shapes and then you can go back into and recreate it and color it,” Williams says.

His virtuosic touch makes the paintings look effortless, but it’s a detailed process that goes into creating them.

“It starts with a very accurate pencil drawing,” Williams says. “That’s the key underlying any painting. You’ve got to construct a foundation for a painting properly. For me, it’s a pencil drawing. It’s just a matter of being patient.”

Viewers are sure to be impressed with Williams’ work. And the Columbia Crossing River Trails Center enhances the work.

“I love all the glass,” Williams says about the venue. “It’s ultramodern. It’s a very nice design, and their location right on the water is immaculate.”

The venue allows for lots of light —and the light glinting off the river is a perfect way for viewers to realize just how great Williams is at capturing light accurately.

“I like the way light affects a scene,” Williams says. “And how it changes, like you see something in the early morning and it changes how you see it at midday or at dusk or even at night.”

Hope Byers, manager of Columbia Crossing, agrees that the artist, the venue and the city of Columbia are a perfect combination.

“The exhibit hall at Columbia Crossing has offered a unique space to host exhibits that related to local history and culture,” Byers says. “Local brewer Mike Knaub shared one of Mick’s watercolors with me, and I fell in love. I immediately knew the photograph that Williams had used to create the watercolor. The familiar storefronts and buildings are perfectly showcased in idyllic fashion. I wanted to showcase the real and reimagined together.”

What: Vintage Scenes from Columbia.

There's a lot going on in Lancaster County this weekend.

In March of 1681, England’s King Charles II granted William Penn a charter for the land that would become Pennsylvania.

Review: Fulton's ‘Kinky Boots’ a joyous romp with a heart as big as its shoes

When one character in the musical “Kinky Boots” challenges another to learn to accept just one person for who they are, they’re encapsulating …

Youth theater program students visit Broadway, go behind the scenes with 'Come From Away' star

The kids who participate in the M-Uth Theater program at the Ware Center every summer know a lot about how theater can change lives.