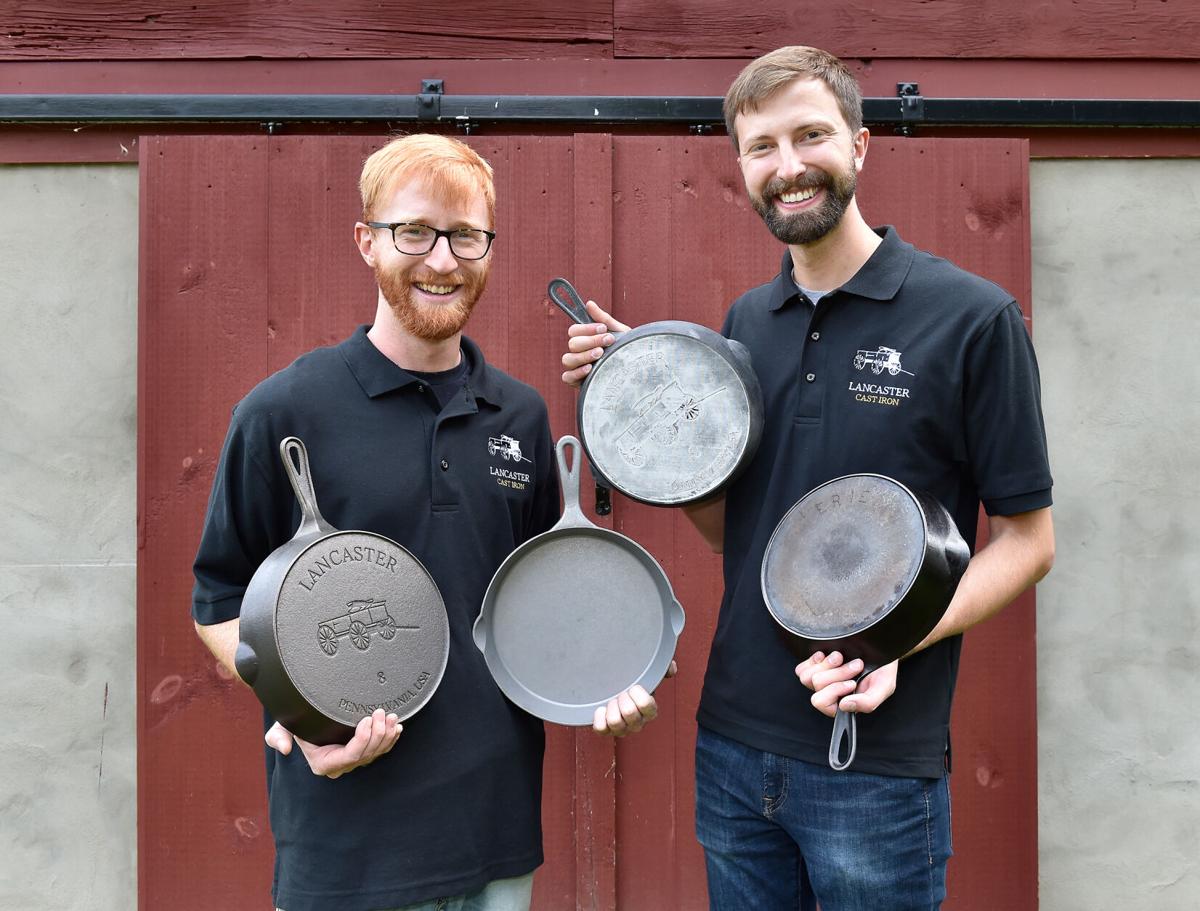 Brandon Moore and Mark Longenecker, co-owners of Lancaster Cast Iron, are making a modern version of vintage skillets, like the one on the right, a Longenecker family favorite. 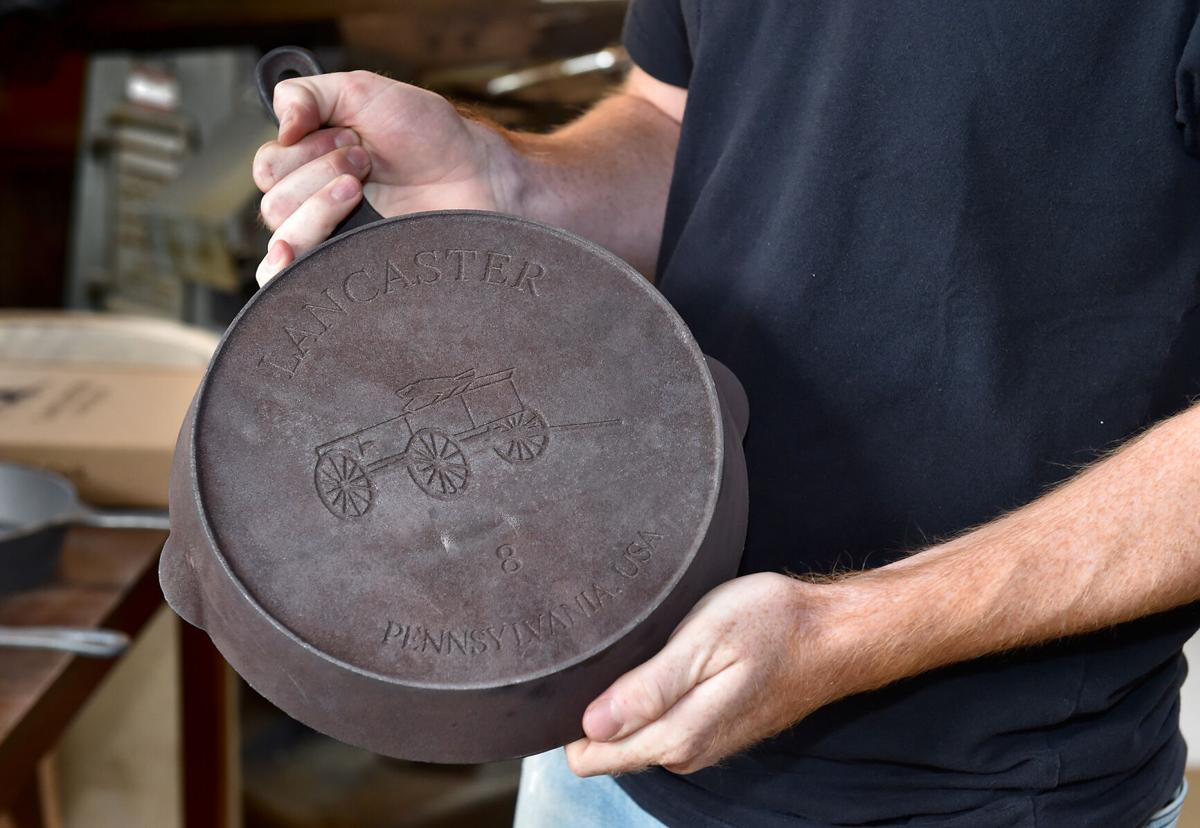 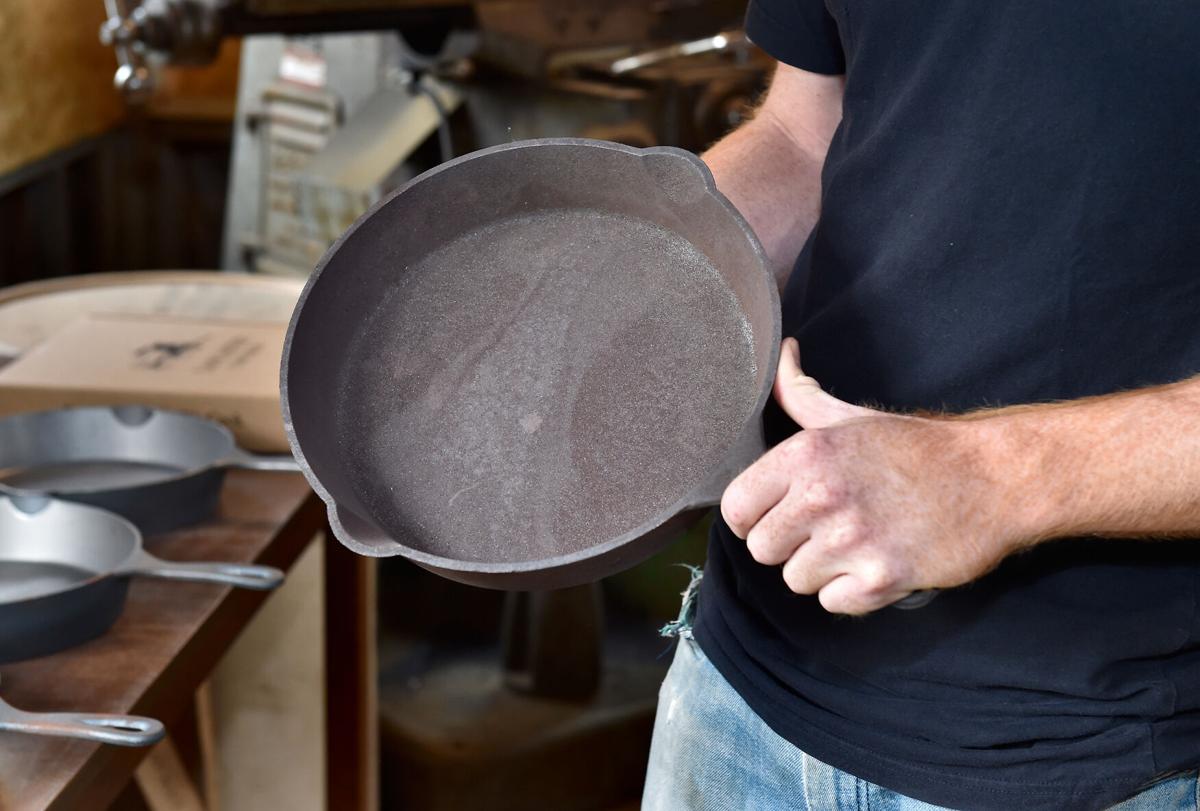 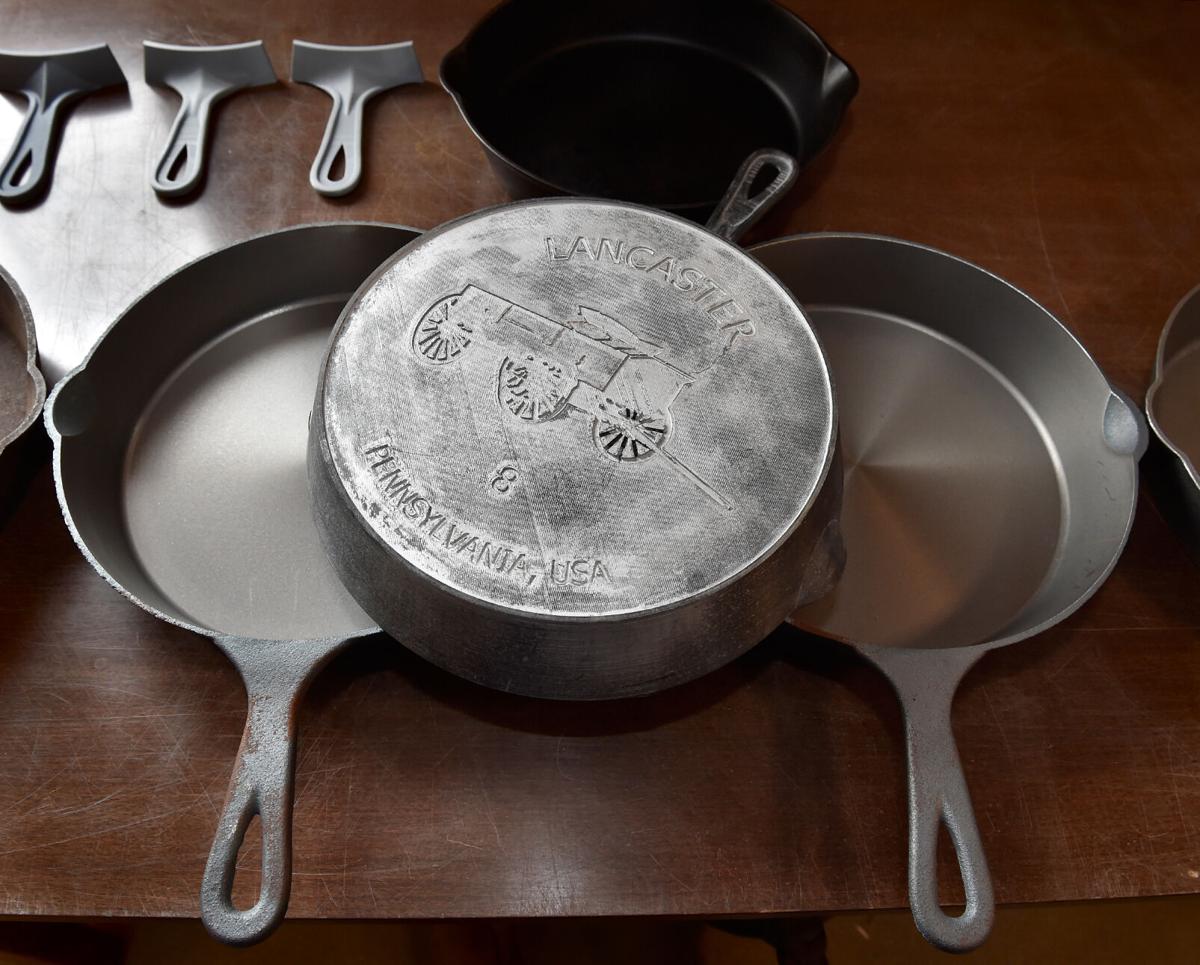 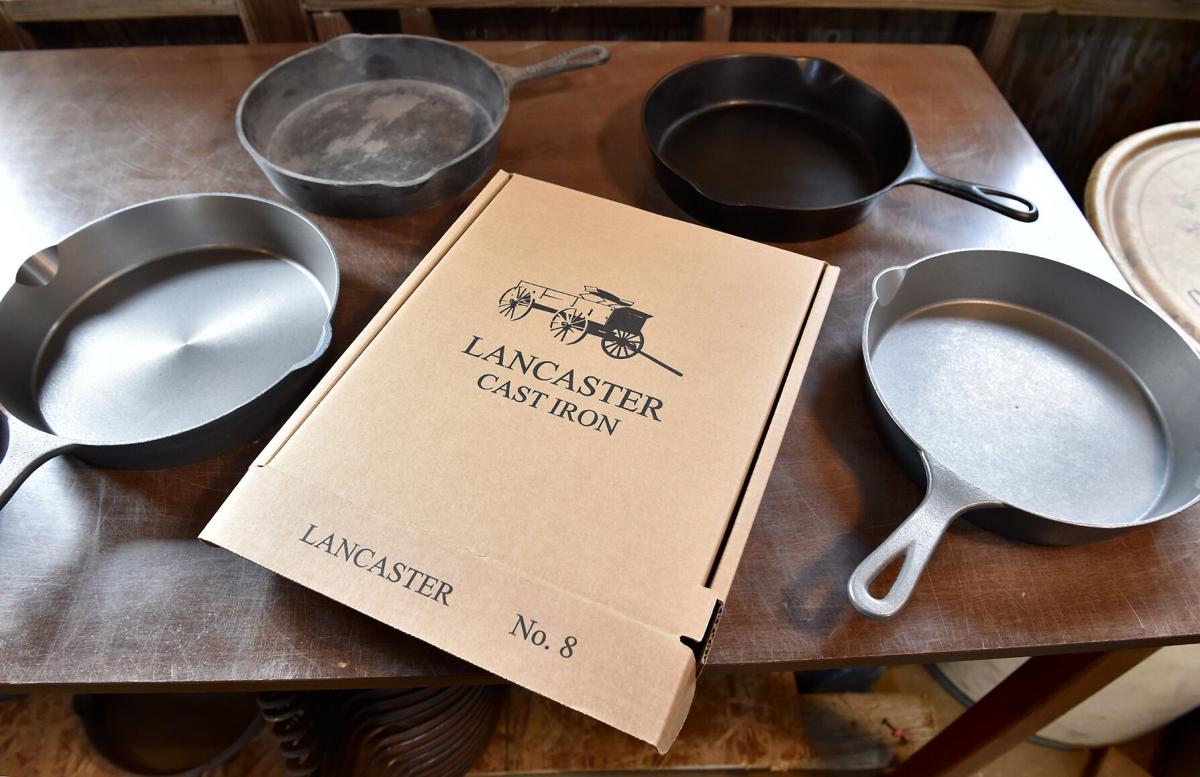 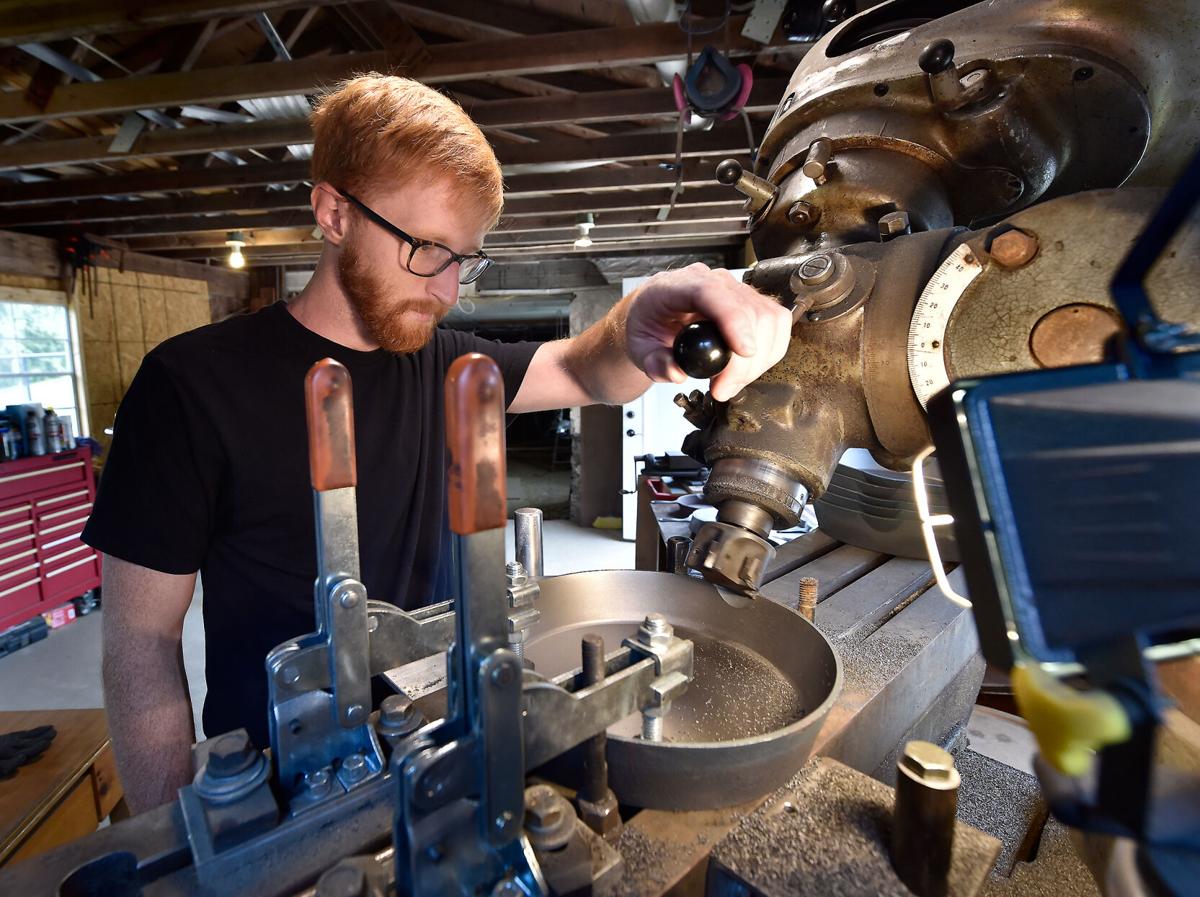 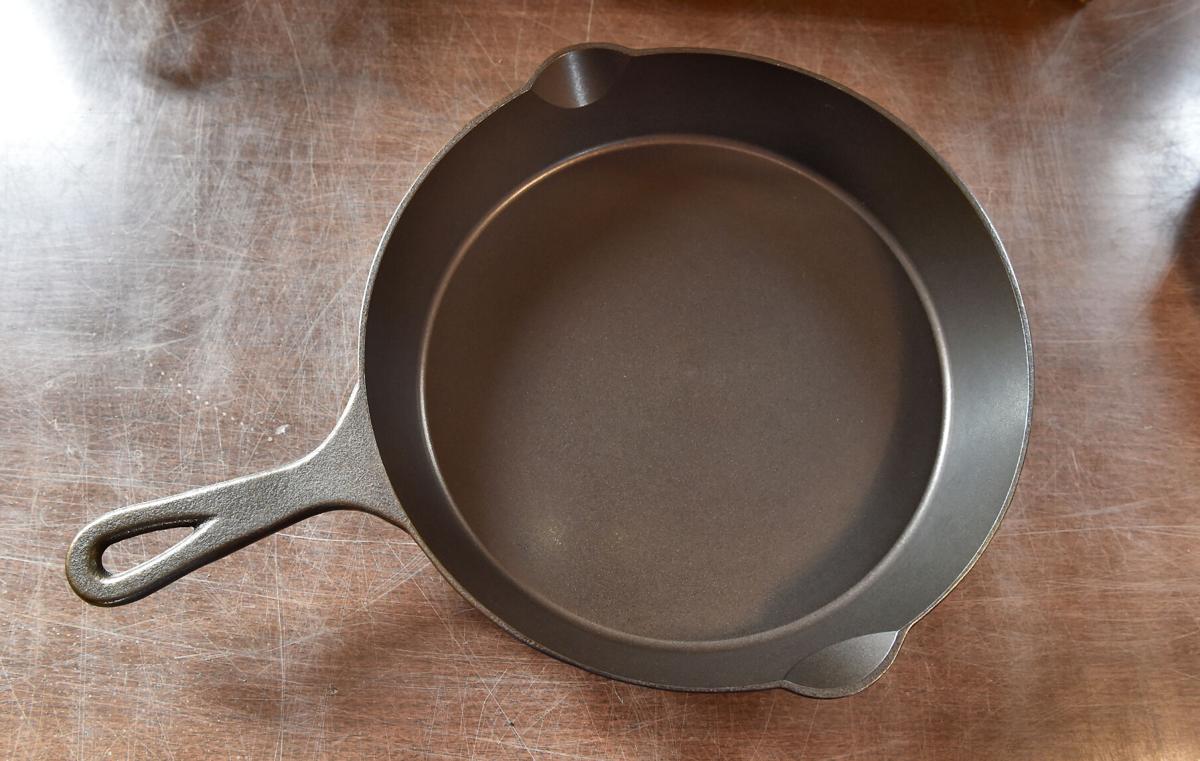 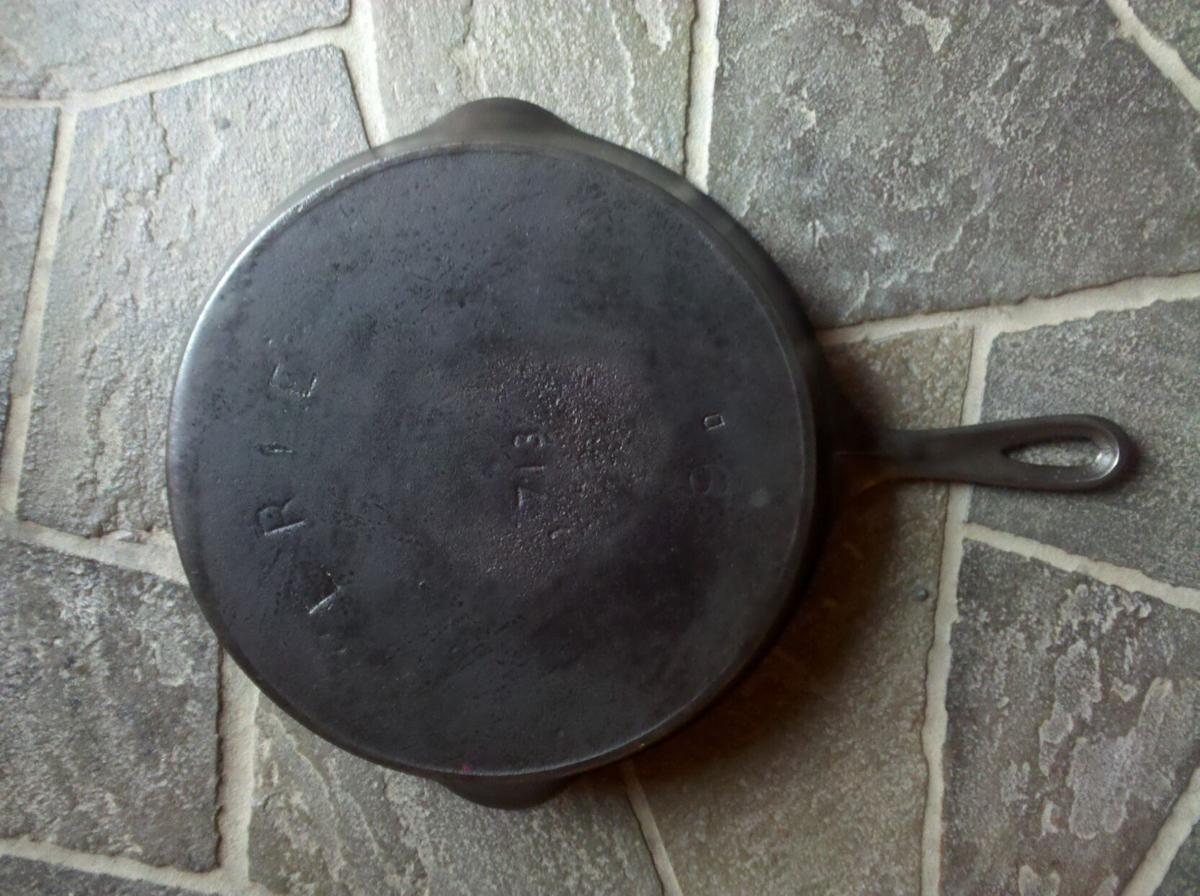 Brandon Moore and Mark Longenecker, co-owners of Lancaster Cast Iron, are making a modern version of vintage skillets, like the one on the right, a Longenecker family favorite.

Each Griswold spider skillet is marked with a stamp on the bottom of a spider in a web. Even more important is inside the skillet: the 10 inches of cast-iron cooking surface, worn smooth over 130 years. Last year, one of these rare made-in-Pennsylvania skillets went on the market with an $8,000 price tag.

Mark Longenecker’s favorite cast-iron skillet can’t bring in the same price, but in his eyes, it’s just as valuable. The Griswold No. 8 is his father’s skillet, lightweight with a smooth surface.

This skillet is the inspiration for Longenecker’s business he started with a college friend, Brandon Moore. Their company, Lancaster Cast Iron, has made a modern version of the Griswold: durable and lightweight with a smooth surface. In the past year, they’ve made hundreds of skillets and sent them from Conestoga to kitchens around the world.

Houseplants are the hot decor trend: Here's how to do it right

Cast-iron cookware goes back much earlier than the Griswold skillets made in Erie. Some cast iron in China was made around 220 A.D. Sand casting helped make the process easier, and by the middle of the 1800s, cast iron was a top material for cookware in the U.S. The skillets and Dutch ovens lasted a long time, retained heat and had a natural non-stick surface, writes cast-iron collector The Kitchen Professor.

However, by the mid-1900s, older cookware was replaced by new pans made of lighter, more modern materials like aluminum.

Cast iron has had a resurgence in the last decade. That includes people concerned about health issues with non-stick coatings, WebstaurantStore, a Lititz-area company, writes in its blog. More restaurants serve food in cast iron, like a pan of sizzling fajitas or a big skillet cookie. Plus, cast iron lasts forever with good maintenance.

Moore, 28, and Longenecker, 29, decided to start their own cast iron

business during an epic road trip. The two met as students at Grove City College in Western Pennsylvania.

After they graduated in 2014, they went their separate ways. Moore moved back to the Rochester, New York, area where he worked in marketing for a company making electric vehicle charging stations. Longenecker moved back to Lancaster County and found a job in management at a shed manufacturer.

They liked their careers but wanted to have their own business. So they quit and took a two-month road trip to Alaska. As they saw the country, they listened to episodes of “How I Built This” and spent hours going through their list of business ideas.

About 16,500 miles later, they settled on making a better cast-iron skillet.

“We wanted the perfect modern skillet,” Moore says. “Because the antique skillets are great, but to find a perfect condition one, you’re looking at a couple of hundred dollars on eBay.”

How to make a skillet

When the Longeneckers’ treasured cast-iron skillet was made more than a century ago, cookware like that was made by hand in sand molds. The raw-cast skillets were smoothed on a grinding stone or maybe milled. This creates a mirror smooth finish but it’s time consuming.

Back in the Lancaster Cast Iron workshop, there are a few stacks of the first skillets.

“We made a lot of mistakes,” Moore says. “Because doing the lightweight, thin, final product that we’re after proved to be much more difficult than we initially expected. So it took a lot of R&D, a lot of practice, a lot of trying different processes to get where we want it to be.”

They had a crash course of casting, machining and customer service.

After 3D-printing a prototype skillet, a local Amish foundry created the test casting. Finding a larger foundry willing to do this type of casting was a challenge.

When the raw castings leave Unicast in Boyertown, Berks County, the skillets weigh about seven pounds.

Next, the skillets need to be machined to bring them down to four and a half pounds. The surface also needs to be smooth enough for food not to stick yet textured enough for the seasoning to stick. That makes the skillets easy to use, even for cast iron newbies.

“Part of that was creating a surface that the seasoning would adhere to and stick to even if somebody put it in the sink with soap and scrub aggressively,” Moore says.

They tested different blasting media and machining processes to create a smooth texture with tiny pores into where the seasoning can adhere.

The skillets are machined at a shop in Millersville and tumbled at Finishing Systems in York. Moore machines the pour spouts in their basement workshop.

For seasoning, they settled on grapeseed oil, which has a high smoke point. Longenecker seasons each pan in the ovens at their home and company headquarters. His sister, Alyssa, and grandmother Carol Wiggins helps with seasoning as well.

Longenecker and Moore turned to Kickstarter for funding before they made their first pan. The crowd-funding platform was also a way to spread the word to cast iron enthusiasts.

After first run of 800 skillets were shipped, customers could pre-order to get in on the next few rounds.

Lancaster Cast Iron customers have a range of reasons for buying a $149.99 skillet.

Richard Brenton uses both of his mother’s cast iron pans daily. He describes them as a four-egg frying pan and a two-egg frying pan. They’re the right tool for the right job, says Brenton, who lives in School Lane Hills.

The former Penn Manor history teacher had Longenecker as a student. When they reconnected, Brenton bought five skillets as gifts for his children and as wedding gifts that are better than heavy, mass-produced cookware.

Garrett Scott has no personal connection to the business partners but found the company searching for cast iron he likes to collect.

“It’s a great skillet,” says Scott, who lives in Nebraska. “It reminds me of an old Griswold.”

And Marion Raub, who lives in York County, found the company on Instagram. She bought her husband a skillet for Christmas. She loves that it’s made in America. So far, it’s been a great pan for eggs on the stovetop or cornbread in the oven, she says.

In the future, Moore and Longenecker dream of having a manufacturing space big enough to give tours and have a retail boutique store.

For now, they’re partnering with local Amish makers to offer things like wooden spoons and spatulas plus leather goods from Welsh Mtn Co.

What happens when someone gets lost in a corn maze? Maize questions, answered

Next up is a No. 10, a 12-inch skillet they’re hoping to release early next year. Adding a larger skillet made more sense than going smaller, they say, because a bigger skillet means more food, and more food serves more people.

“We’re all about sharing meals with friends and family,” Longenecker says. “That’s how we both grew up. Spending time in the kitchen, family around the dining room table on a daily basis, hosting friends, making big meals for friends and family.”

Makenna Linder’s smile was ear-to-ear when she walked out of her Manheim home Saturday to see Howie, a former Manheim Fire Co. fire truck, dec…

After Lancaster County's fairs were canceled, florists compete in this community flower show

In a year of cancellations, Community Flower Fair was a chance for gardeners and florists to compete.