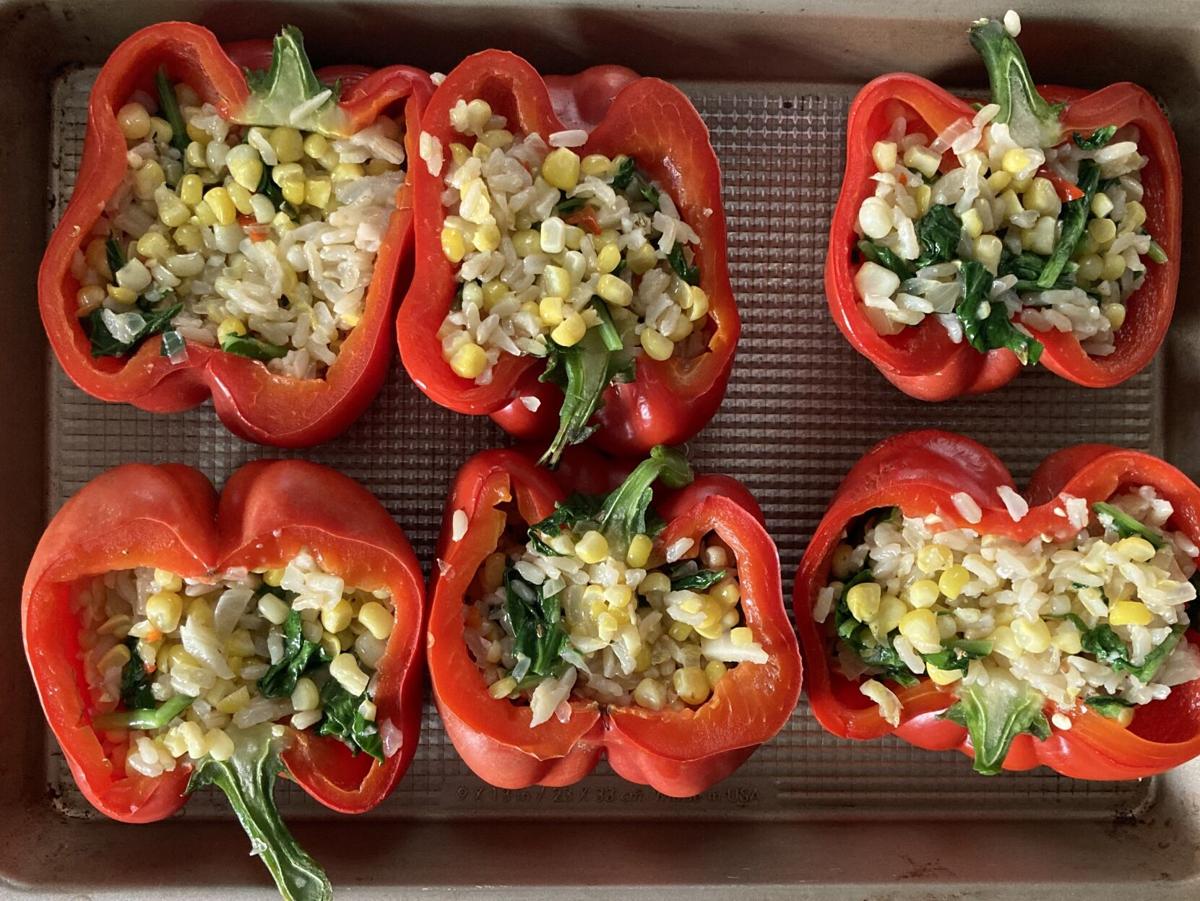 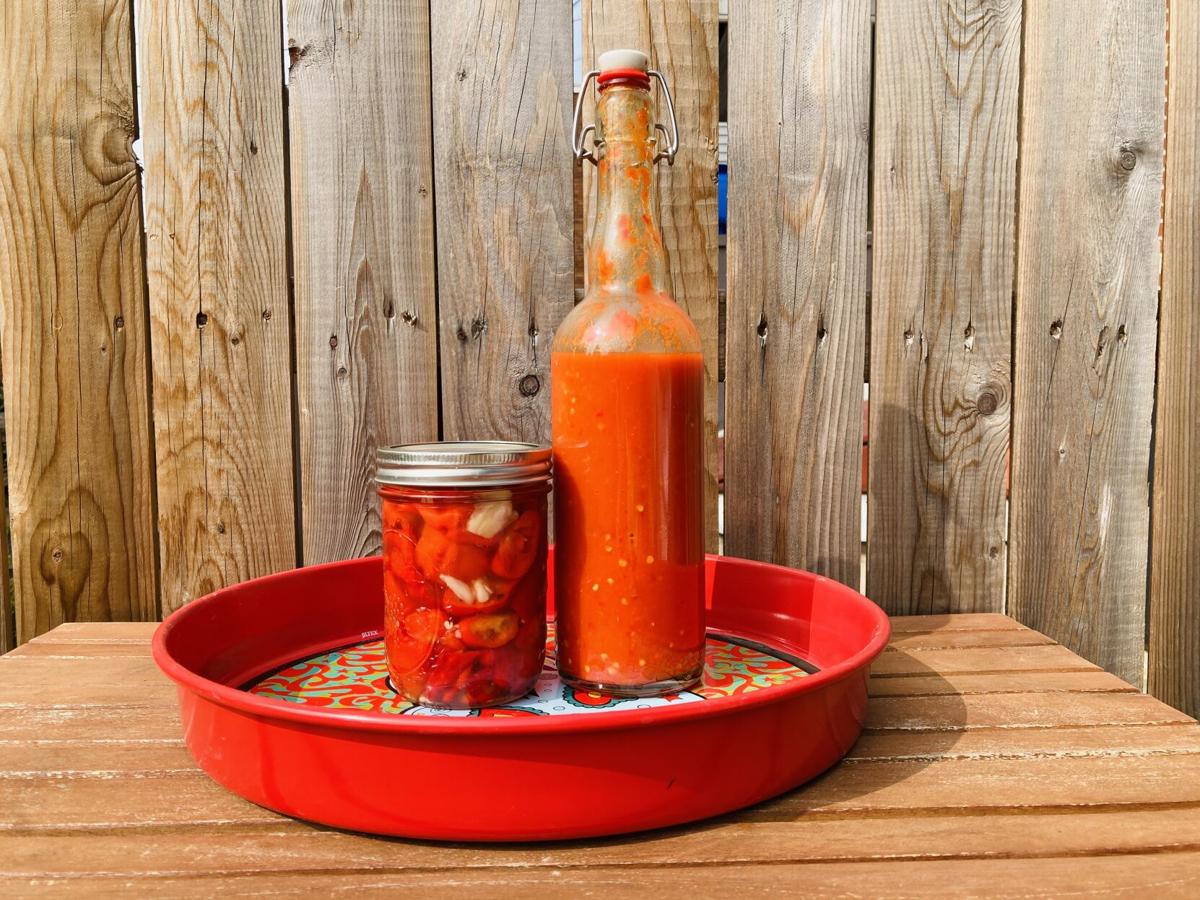 Before (left) and after shots of lacto-fermented red chile pepper sauce. 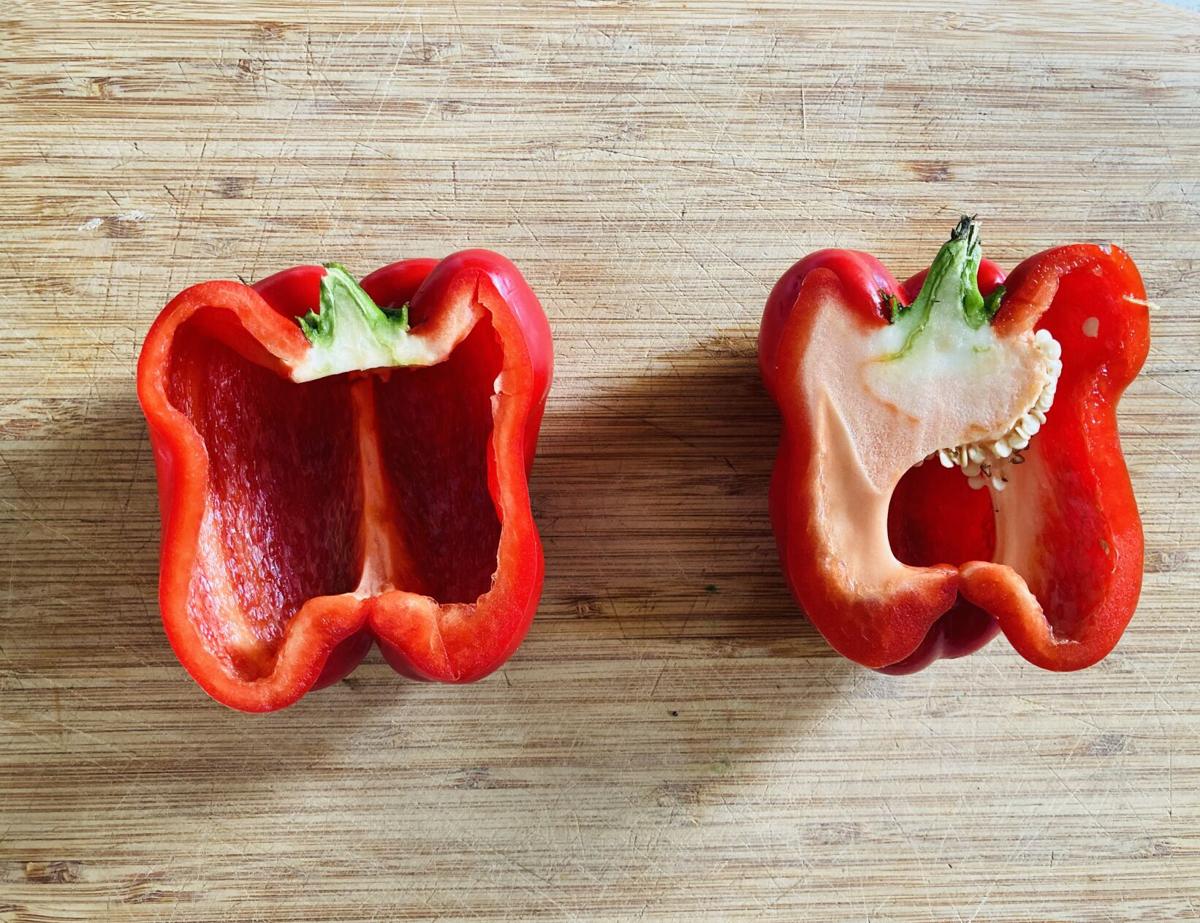 With the first day of fall on Tuesday, we enter that magic liminal time when two seasons collide and the produce is glorious. It’s true; those special moments with a slurpy peach or a tomato sandwich are just about done for the year, but the sweet corn (weather permitting) will stick around until mid-October, and let’s talk about peppers, on parade in their sun-kissed magnificence, sweet, spicy and somewhere in between.

While the goods last, I am on a frenzied mission to eat up as much of summer as these waning days will allow. Care to join me? Here’s how I’m spending my time until Mother Nature says the party is over.

A guide to "putting up" summer vegetables in the freezer, plus a recipe for ice cube sofrito

If you have not already taken a knife along ears of corn to remove the kernels and freeze for the winter, you had better step on it.

For eating in the moment, consider a quick saute of corn kernels (about 1 cup or 2 ears’ worth) and 1/2 cup grated onion, cooked in butter or olive oil. You can season with red pepper flakes, thinly sliced garlic (or not) and maybe a smidge of dried thyme or oregano. Cook until it gets a little crusty, and add a tablespoon of water if the mixture gets dry.

While the corn is cooking, boil some water and add 2 cups of orzo, the pasta shaped like rice. It’s the perfect size for corn kernels and cooks in about 8 minutes. Drain and drizzle with some olive oil, then toss in the corn saute, plus maybe some fresh basil, mint or parsley. Maybe you have some cherry tomatoes that need using up. Maybe you want a little grated Parm. It’s all good.

Now, if you have 2 pounds of tomatoes in your midst, you can make sauce or the base of a soup in minutes. You will want to peel the tomatoes, which you can do by blanching in boiling water for about 2 minutes, then shocking in ice water. Removing seeds are optional, but do remove the cores. You can mash by hand or throw into the blender for a puree. Two pounds of tomatoes will give you about 2 cups of puree, which you can scent with olive oil or butter, a quartered onion and some salt, simmer until the texture is to your liking and eat with toast, over pasta or add some spinach until wilted.

You can also thin the puree with 1 or 2 cups of water or broth to make a bridge-season soup. Start by cooking 1 cup chopped onion in 3 tablespoons of olive oil, followed by 2 cloves garlic, finely chopped and maybe 1/2 medium chile pepper, minced. Feel free to add some spices after the onions soften — maybe 1 teaspoon ground cumin, 1/2 teaspoon ground coriander, a few pinches of ground cinnamon. The tomato puree and extra liquid follow; bring it to a boil, then reduce the heat and cook until warmed through, about 10 minutes. Add up to 2 cups of corn kernels and cook for about 5 minutes. Squeeze a little lime juice at the end, and maybe add some basil in everyone’s bowl.

How to make salsa with in-season tomatoes and tomatillos

Preheat the oven or grill to 400 F. Roast until blistered and somewhat charred, 30 to 40 minutes. Place in a sealed bag or container and let cool for about 15 minutes. With the dull side of a paring knife, remove skins, veins and seeds. Do not rinse. Peppers can be frozen (make sure to label and date) for later. But if using right away, consider these ideas:

Heat 2 tablespoons oil in a pot with about 1 cup chopped onion and 1 smashed clove of garlic. Cook until onion is slightly softened, about 5 minutes. Add 3 medium potatoes (about 1 pound), peeled and quartered, a sprig or 2 of fresh thyme, enough water to cover (about 3 cups) and 1 teaspoon salt. Bring to a boil, then lower heat and cover. Cook until the potatoes are fork tender, 15 to 20 minutes. Remove the thyme, add the roasted peppers and 2 ounces bourbon (optional), plus ¼ teaspoon each ground cayenne and smoked paprika. Puree until smooth, then reheat and serve with lemon wedges. The flavor is sublime

Make a dip that doubles as a sandwich spread, using 1 roasted red pepper

Blend 1 cup of feta cheese in a blender or food processor until somewhat whipped. Add the pepper, 1 teaspoon dried oregano, 1/4 teaspoon red pepper flakes and the juice of 1/2 lemon and blend again. The color will be burnt orange. Scrape down the sides of the bowl and add 2 tablespoons of olive oil.

Heat 3 tablespoons of olive oil in a 12-inch pan. Add 1 cup onions, thinly sliced into half-moons, cooking until soft, about 5 minutes. Add 4 cups sweet bell peppers, sliced into strips (from about 4 peppers), turning with tongs and cook until soft, reduced in volume and even slightly caramelized, 10 to 15 minutes. At this point, you can add some minced chile pepper of choice and a few cloves of thinly sliced garlic (or not), cooking for 1 or 2 more minutes.

Stuffed peppers that are actually pretty

Remember the ground beef-filled, army-green peppers from the ’70s? These stuffed peppers are a lot brighter and lighter. Use the filling details below as a guideline and create your own version based on what you have on hand. No matter what you decide, sun-kissed bell peppers make festive one-dish containers with fairly little effort.

Excerpted from “The Meat Lover’s Meatless Cookbook” by Kim O’Donnel.

With a paring knife or teaspoon, carefully remove the seeds and membranes of the peppers. In a large saucepan, bring about 6 cups of water and 1 teaspoon salt to boil. Add the pepper halves (submerge cut side down) and simmer until slightly tender, about 5 minutes. With tongs, remove the peppers and drain any excess water. Transfer to a sheet pan or baking dish for later.

In a large skillet, heat 2 tablespoons of the oil. Add the onion and chile pepper (if using), and cooking over medium heat until slightly softened, about 3 minutes. Add the garlic and corn, stirring until well coated and let corn get a little brown, about 3 minutes. Stir in the greens, stirring until coated; if the mixture seems dry, add 2 tablespoons of water. Cook until greens are wilted, about 5 minutes.

Remove from the heat and add the herbs and grain of choice. Stir until well mixed and taste for salt, adding as needed.

Using a 1/3 cup measure, fill the peppers and dot with cheese (if using).

Drizzle the remaining oil over the pepper and bake for about 15 minutes. Serve hot or at room temperature, squeezing the lemon over the top.

Over the years I have made hot sauce with inconsistent results; it was too thin, too thick or just too darn peppery. I know, it is hot sauce after all, but a really good hot sauce should have layers of flavor in addition to heat. This summer, I tried something that has been on my to-do list. Instead of making a vinegar-based sauce and preserving with the water bath canning method, I packed a bunch of chile peppers and garlic into a jar, covered with a saltwater brine and let them sit for 2 weeks, a process known as lacto-fermentation. Every few days, I checked

to make sure the brine continued to cover the peppers and to check for bubbling, a sign of fermentation progress. By Day 14, the mixture was sour in a pickled — not rotten — direction and the aroma was heady. I had a good feeling that this sauce would be different — and I was right. The amounts below will give you just under one pint of sauce. Note: I highly recommend wearing disposable gloves when handling chile peppers.

Slice the tops of the peppers, then cut them in half lengthwise. Place in a bowl, along with the garlic. Keep gloves on.

Place the hot water in a liquid measuring cup and with a fork, whisk the salt until dissolved. Pour the brine over the pepper-garlic mixture and with your hands, massage the peppers for about 1 minute.

Place the peppers and garlic into a pint jar, packing by pressing down with your fingers, knuckles or a wooden spoon. Gradually pour the brine on top, leaving one inch of headspace, but also ensuring that vegetables are completely covered. Wipe the rim of the jar clean, place the lid on top and gently screw on the band. Set the jar on a plate or in a bowl to collect any seeping brine (which is fine) and away from sunlight or other heat source, and let the fermentation begin.

Strain the mixture and reserve the brine. Puree in a food processor or heavy-duty blender until fairly smooth, 3 to 5 minutes. Add the brine (feel free to go gradually to experiment with texture) and puree for 3 minutes. Pour into jars or bottles and keep refrigerated. Keeps well for about 6 months.

With COVID-19 causing many travel plans to be canceled, including one my husband and I had planned for this summer, I have been reminiscing ab…

With the seasonal shift comes cooler eves and perhaps shifting gears in the kitchen. Instead of cooling off with granita and gazpacho, I’m set…

Every year, the Lancaster Central Market hosts their Harvest Breakfast event right outside the market's doors.

Do you have a cooking question burning a hole in your brain? Is there a technique or ingredient you have always wanted to know more about but …