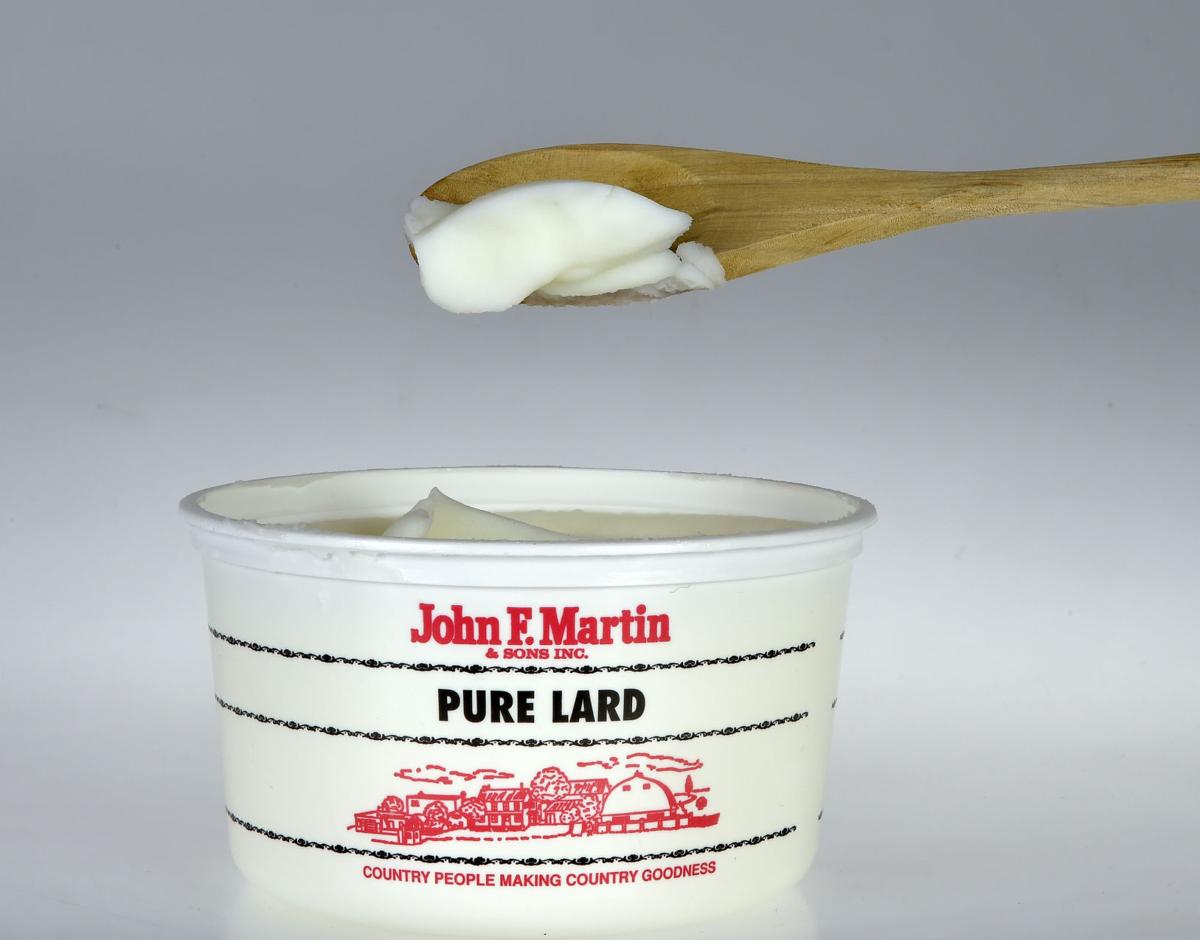 A 2-pound tub of locally produced lard. Pure lard -- many times in larger-sized containers -- can be found at many local markets and groceries in the region; this tub was found at Sharp Shopper in Leola. 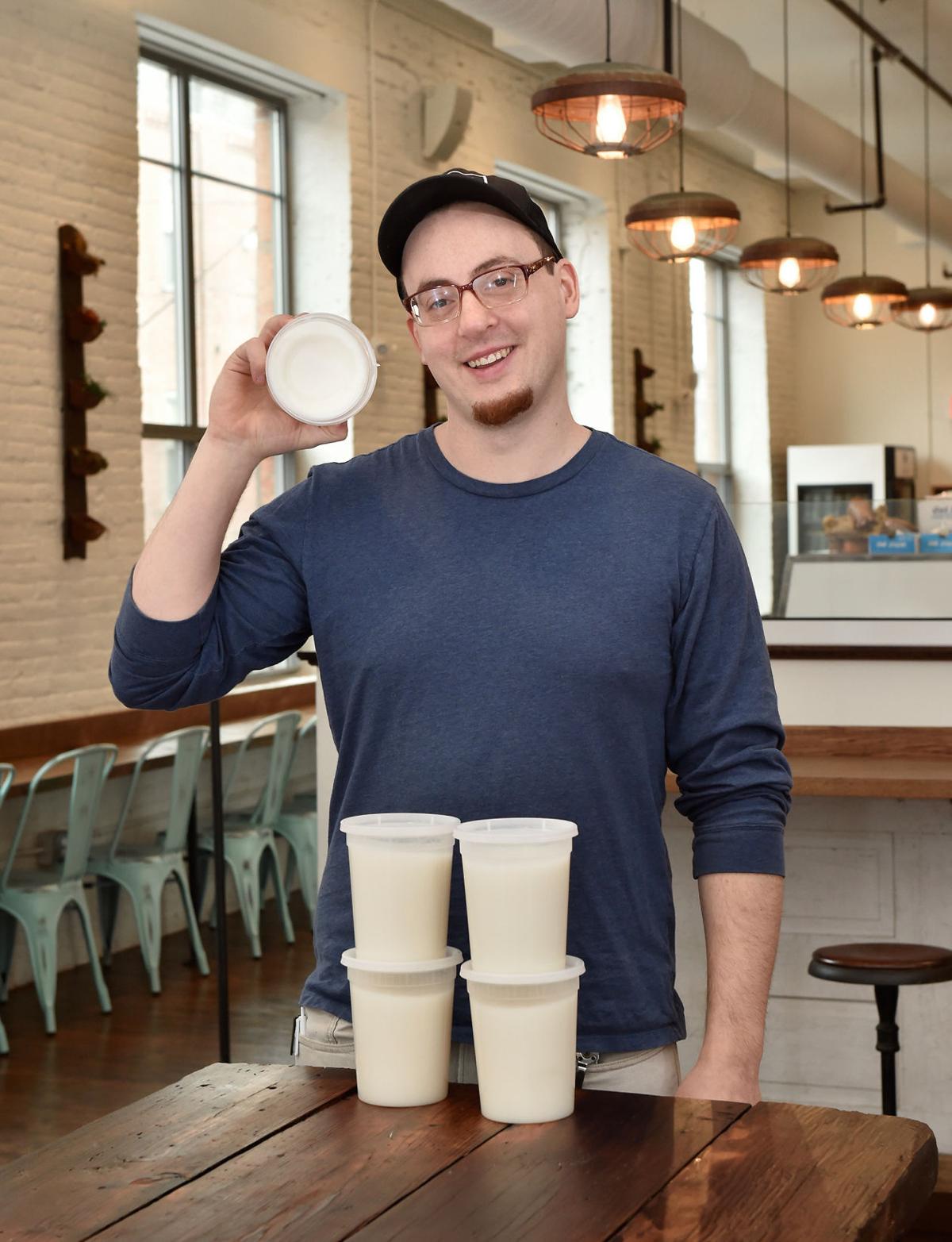 Steve Cabalar of Cabalar Meat Co., is pictured with several containers of lard that is made and sold on site.

A thick chunk of homemade bread spread with lard isn’t a commonplace sight today — certainly not as common as a piece of bread topped by sweet butter.

But generations ago, the Germans treasured their Schweineschmalz; the Poles their smalec; the Chinese their zhuyou; the Hungarians their zsioskenyer or “lardy bread.”

Lard is the ingredient that links Mexican refried beans and tamales, and it’s found in the traditional cuisines of just about every culture where pigs were raised for meat.

Questions about lard’s health — it is high in saturated fat — were raised. And World War II even had an impact: Lard had been diverted for military purposes during the war, and the general population got used to vegetable oil replacements.

But lard, again, is on the rise. Many home cooks, who continued to seek out lard for flaky pastry crusts, are being joined by high-end chefs, and some of its health impacts are being reconsidered.

How lard is made

The process of creating lard is pretty simple.

At Cabalar Meat Co. in downtown Lancaster, it’s a natural byproduct of a whole-animal butchering operation.

“When you break down a (hog), pork fat is a big byproduct,” says owner Steve Cabalar. “So we use it to cook with on our griddle, and then we put it in our frankfurters before it gets rendered. We confit (slowly cook to preserve) our chicken wings in lard as well, in the oven.”

The pork fat, of course, also gets turned into lard that is sold to customers.

First, it gets put through the grinder — smaller pieces will take less time to render. Next, it gets heated in a pot, brought to temperature and simmered until the fat is liquefied. The final step: Skim off the pieces that don’t melt (see “Leftovers” story) and package the rendered lard. It should be stored in a closed container in the refrigerator or freezer until used. Refrigerated lard will be good for six months; storing lard in the freezer maintains its freshness for three years.

In traditional Pennsylvania Dutch cooking, lard had pride of place when it came to baking.

“Biscuits, pie crusts, cakes, breads, cookies all would have lard as the shortening,” Tonya Clifford says. The Berks County woman administers the Pennsylvania Dutch Cooking & Living Facebook page. And lard would be used, she says, for “frying just about everything from potato chips to chicken to fasnachts.

“Just about every farm family would have a tin of lard, unless it was sold,” Clifford says. “Lard has always been a commodity, and many farm families made it to sell to city people.”

That would include Clifford’s own family, she says. “My great-grandparents raised pigs and sold at market,” she says, and “one of the items that they sold was lard.”

Of course, lard plays a big role in Fasnacht Day. Traditional treats designed to use up fats in the home before Lent begins were fried in lard.

When it comes to baking, both Cabalar and Joella Neff, of Mirror Image Farms near Marietta, suggest looking for a product called leaf lard. This is made from fat that cushioned the hog’s organs.

“There’s not a lot of movement” in those areas of the body, Cabalar says. “And less movement equals less flavor.”

Muscles that tend to move a lot — a hog’s legs or face, for example, tend to have more blood flow. That blood flow imparts a meatier flavor to the lard.

“Leaf lard is the purest fat,” says Neff, whose farm sells its lard online and at Pies Galore and More in Mount Joy. Leaf lard is “prized for pastries because ... it has the least amount of porky taste.”

As the attention of some home cooks refocuses on using lard, there has been some discussion about whether it’s a more healthy option than vegetable oils and other fats used in cooking and baking.

The answer all depends on what measure you’re using.

They’re created the same way, but have some notable differences. Lard is from pork; tallow is from beef and has its own advantages.

“Beef tallow has a higher smoke point,” which makes it ideal for deep-fat frying, Steve Cabalar says; his Cabalar Meat Co. in Lancaster has beef tallow french fries on its menu.

“A lot of people use beef tallow, if they use the suet, the kidney fat, for candlemaking. It’s a lot waxier; it has a different texture,” Cabalar says.

— Trans fats: Lard has none — unless it’s been hydrogenated to make it shelf-stable. Then it does contain trans fats. The American Heart Association recommends avoiding trans fats.

— Monounsaturated and polyunsaturated fats: Found in lard; the “good” fats that can help lower levels of “bad” cholesterol.

— Vitamin D: One tablespoon of lard contains 1,000 international units of vitamin D, a nutrient that more than 40 percent of Americans don’t get enough of. The same amount of butter contains 9 IU. Olive oil contains none.

— Free radicals: Lard cooked at high heat maintains its chemical structure better than other oils such as canola or corn, according to Prevention magazine. The other oils can break down and release free radicals, which have been linked to inflammation.

Still, nutritionists warn, fat is, well, fat. Both the American Heart Association and the Centers for Disease Control recommend limiting intake of saturated fat, which is at high levels in lard.

“Most saturated fat comes from animal products,” the American Heart Association says, and people should limit their intake no matter the source.

And one final health note: Neff, of Mirror Image Farms, recommends making sure the lard is sourced from “pastured, chemical-free pigs.

“Animals (like people) store toxins in their fat, bones and organs,” Neff said in an email. “So when eating these parts of the animal, which are nutrient-dense, it’s even more crucial to source from ‘clean’ animals.”

The process of rendering pork fat doesn’t just result in lard — little bits of fried skin and other meat parts that float to the surface also have a place in cuisines worldwide.

Around here, they’re most often called cracklings — a term rooted in the American South — or chicharron, the Spanish term. But they exist in every culture around the world that follows a tradition of not wasting a bit of a butchered animal.

They usually contain a bit of skin and the underlying fat, and one typical way of “making” them is to scoop out the unmelted bits from pork fat that’s being rendered into lard. Some of the terminology can vary by region, or even change depending on the amount of fat left attached. But, with a rather loose definition, those little bits of fried porkiness are found in languages around the world, with spellings sometimes varied based on translation:

Learn how this technique seals in moisture and creates more tender foods.

Today is Fasnacht Day: here are 8 places to get fasnachts in Lancaster County

Fasnacht Day is Feb. 25. Here's where to find them in Lancaster County.