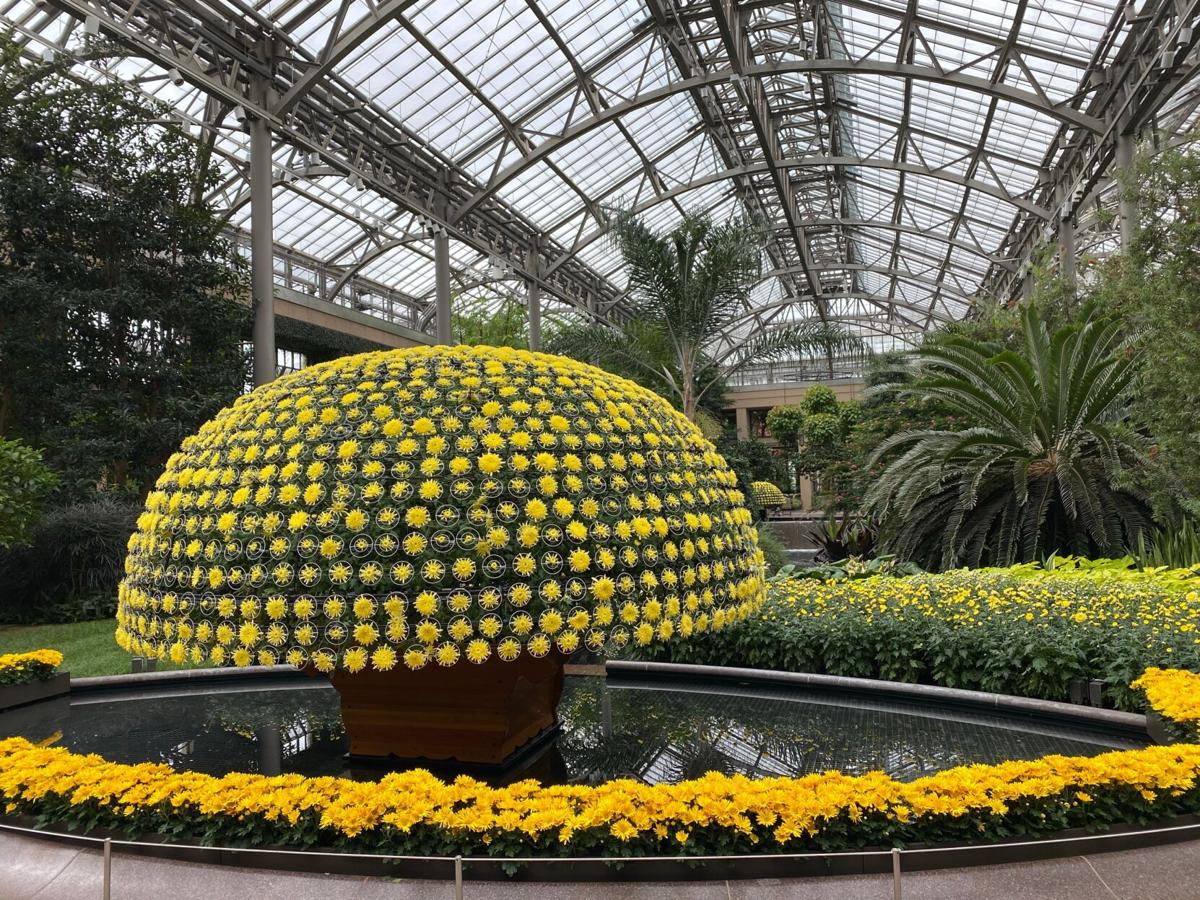 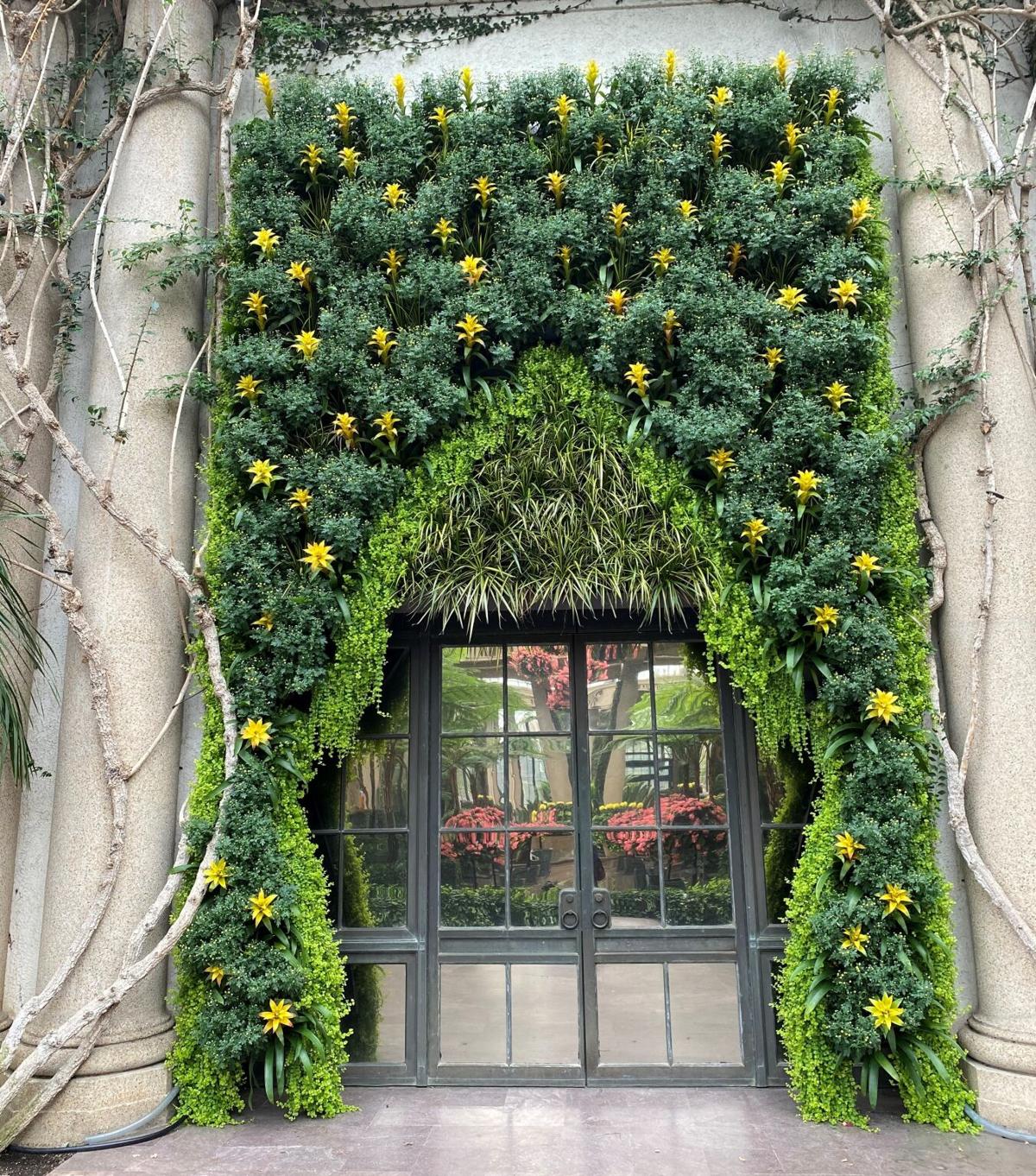 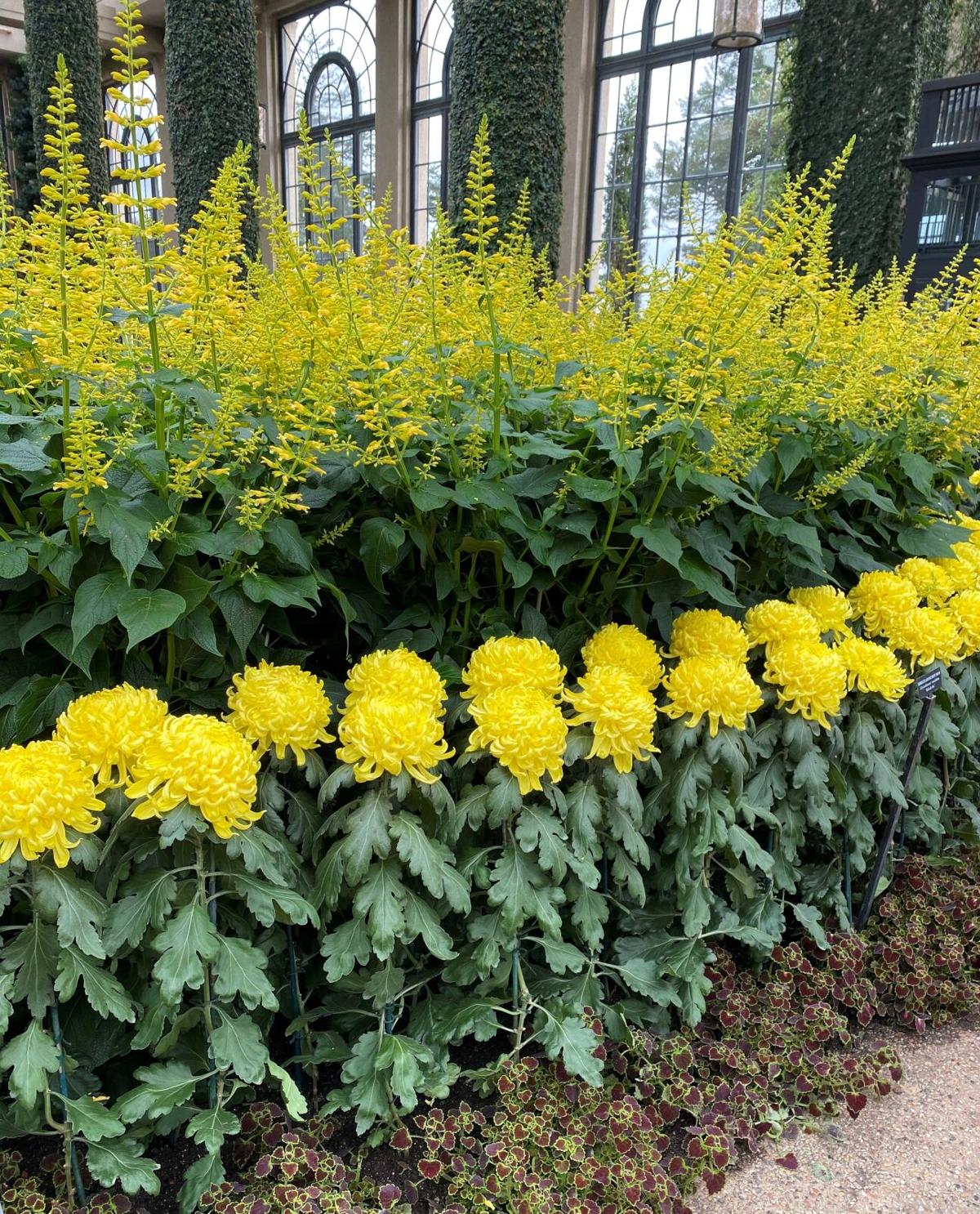 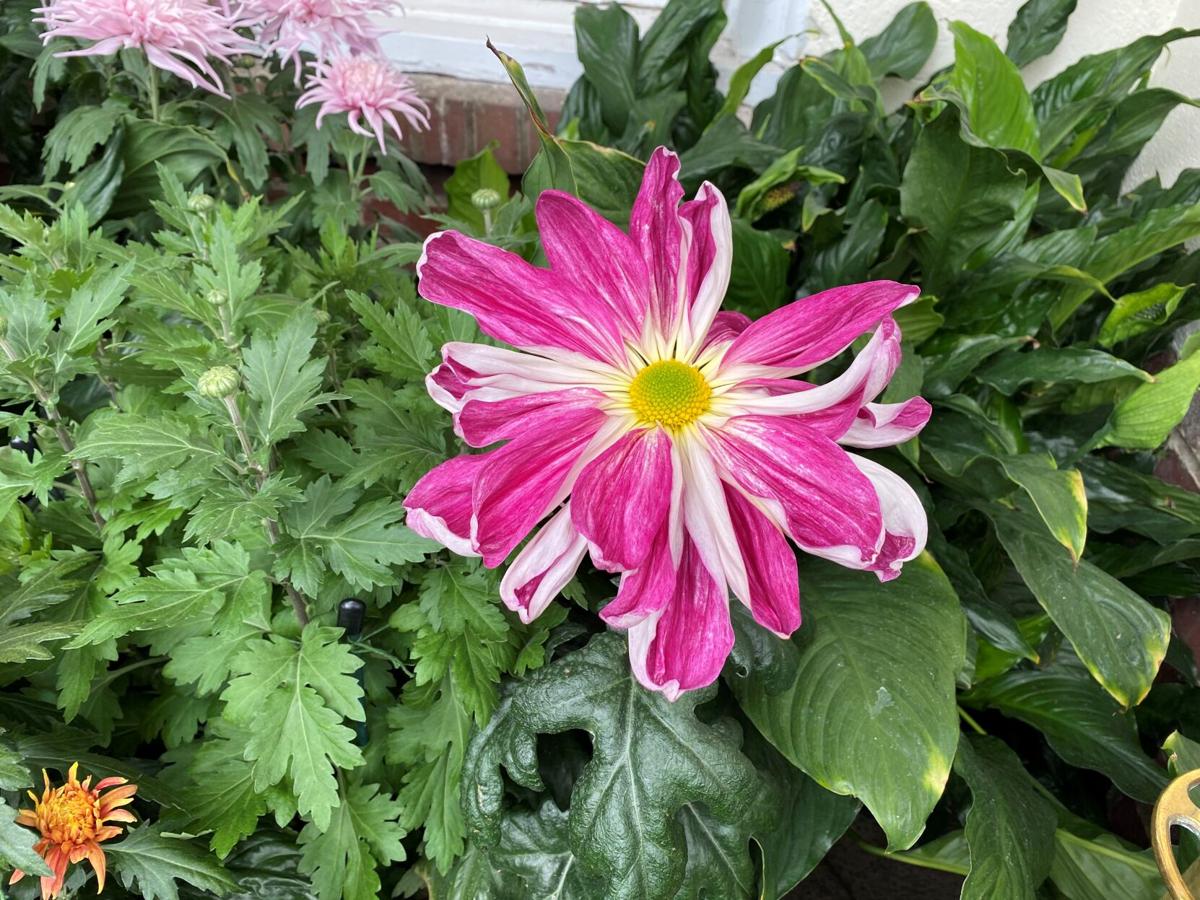 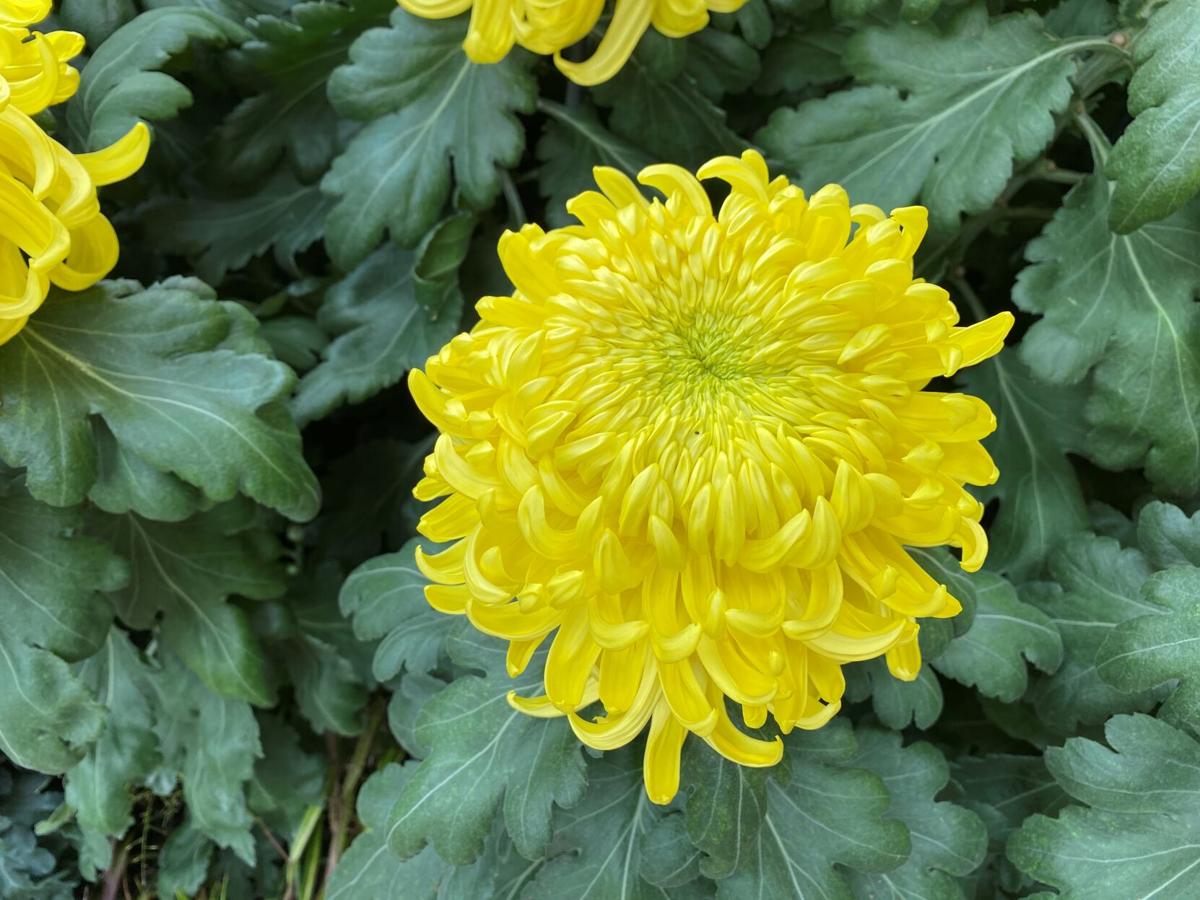 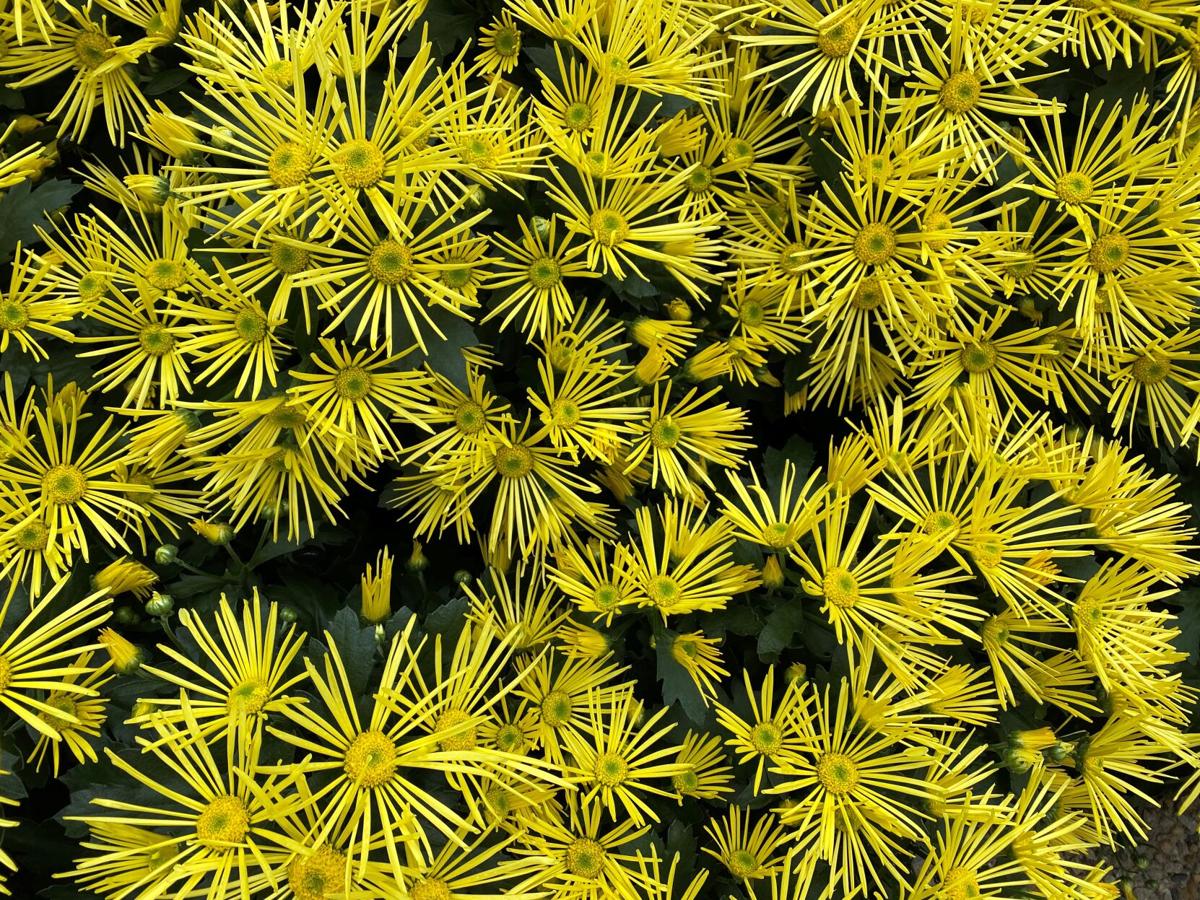 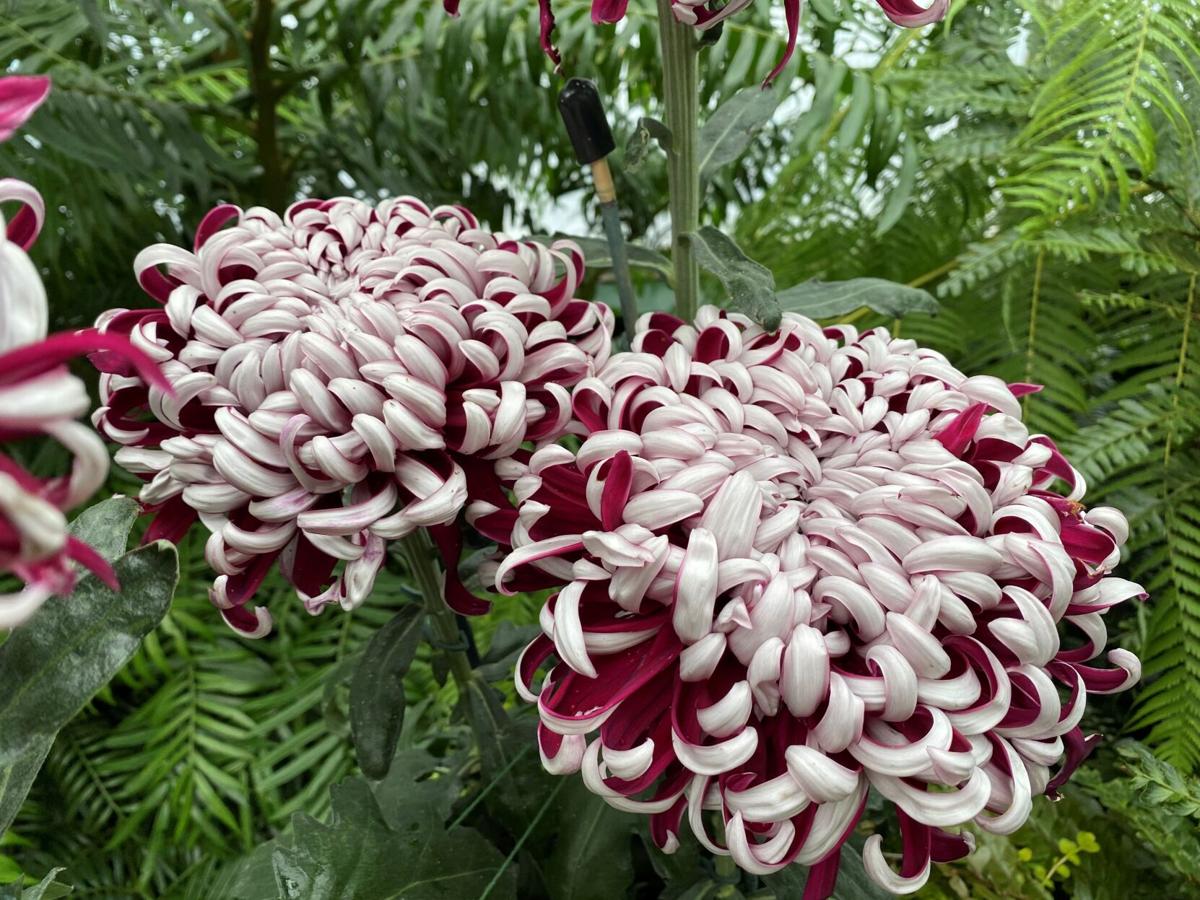 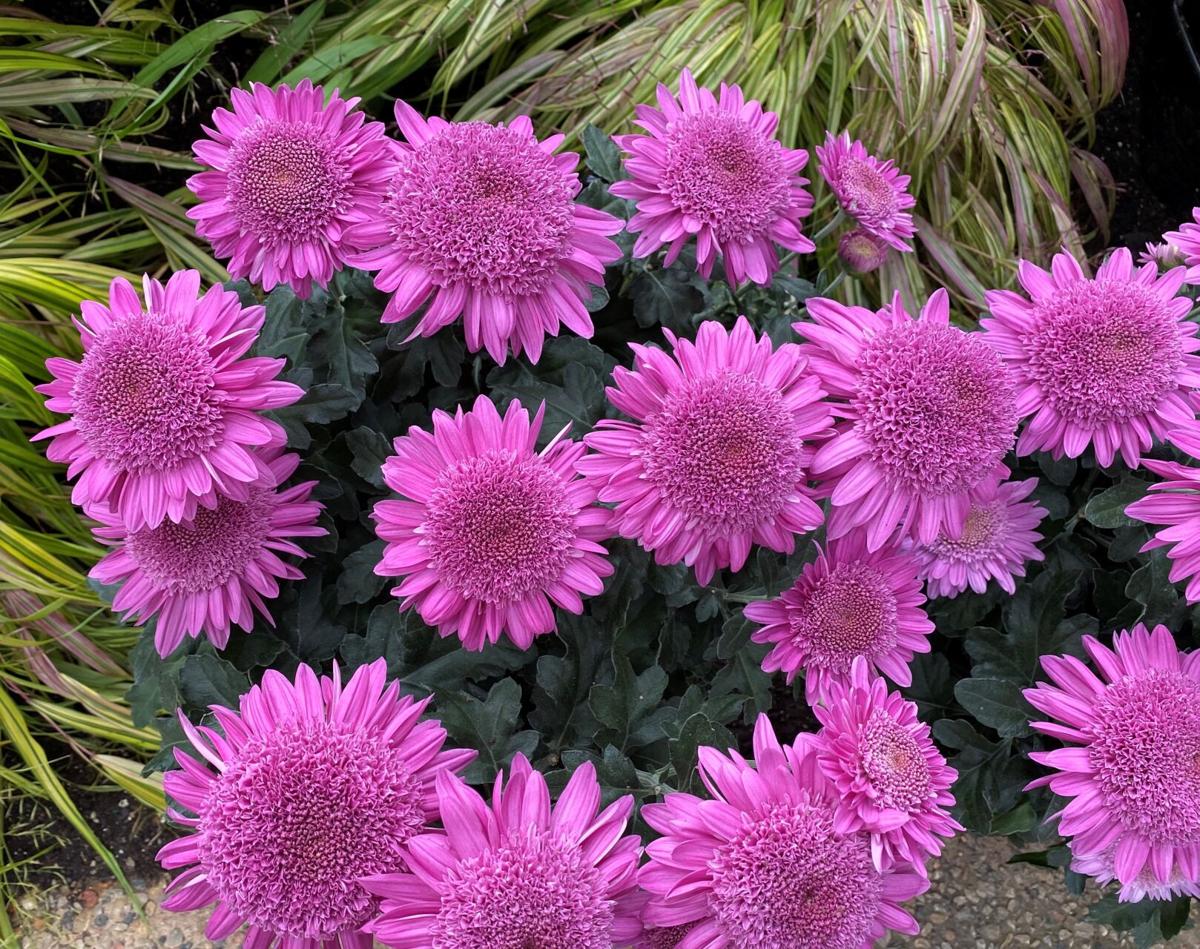 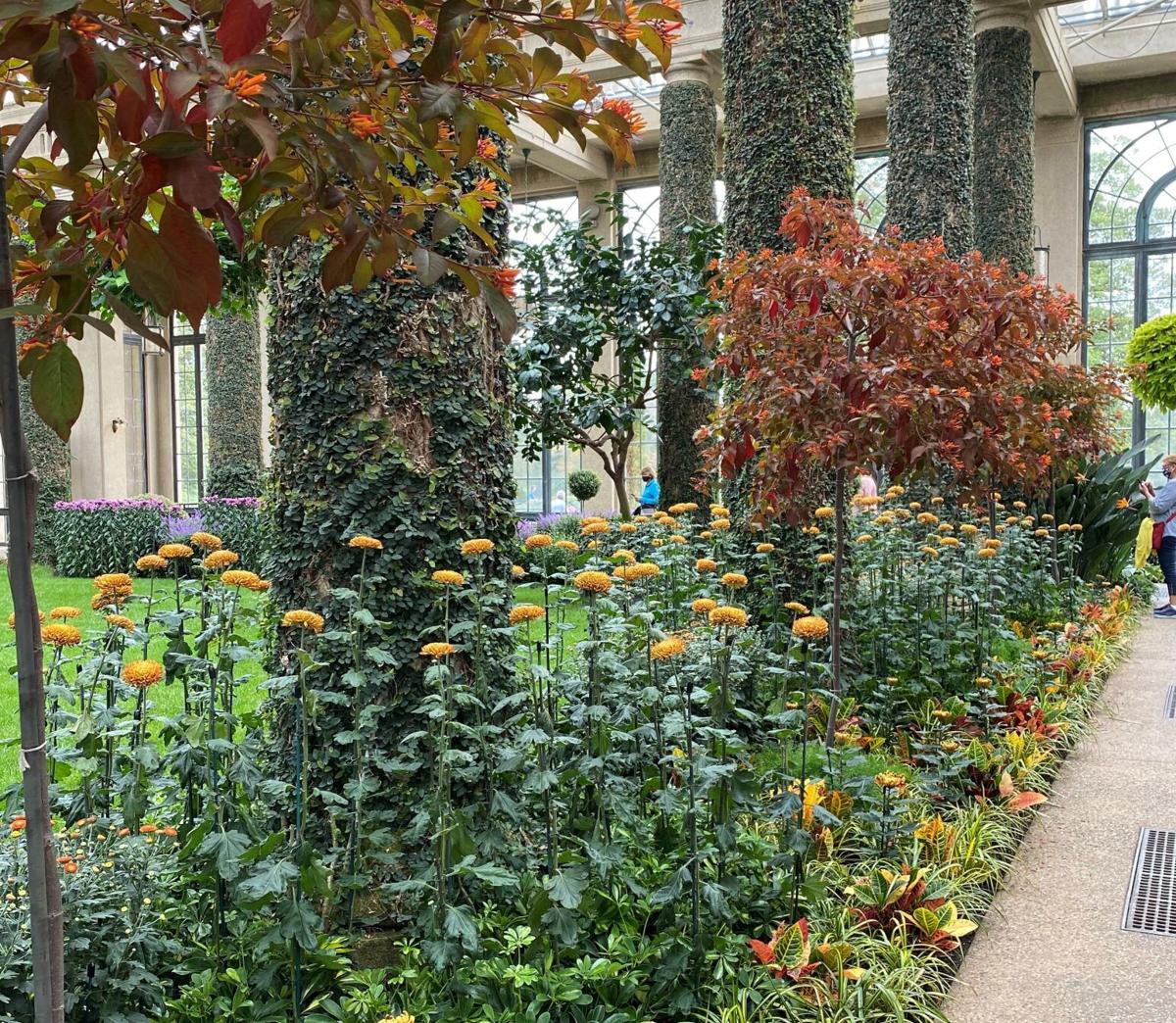 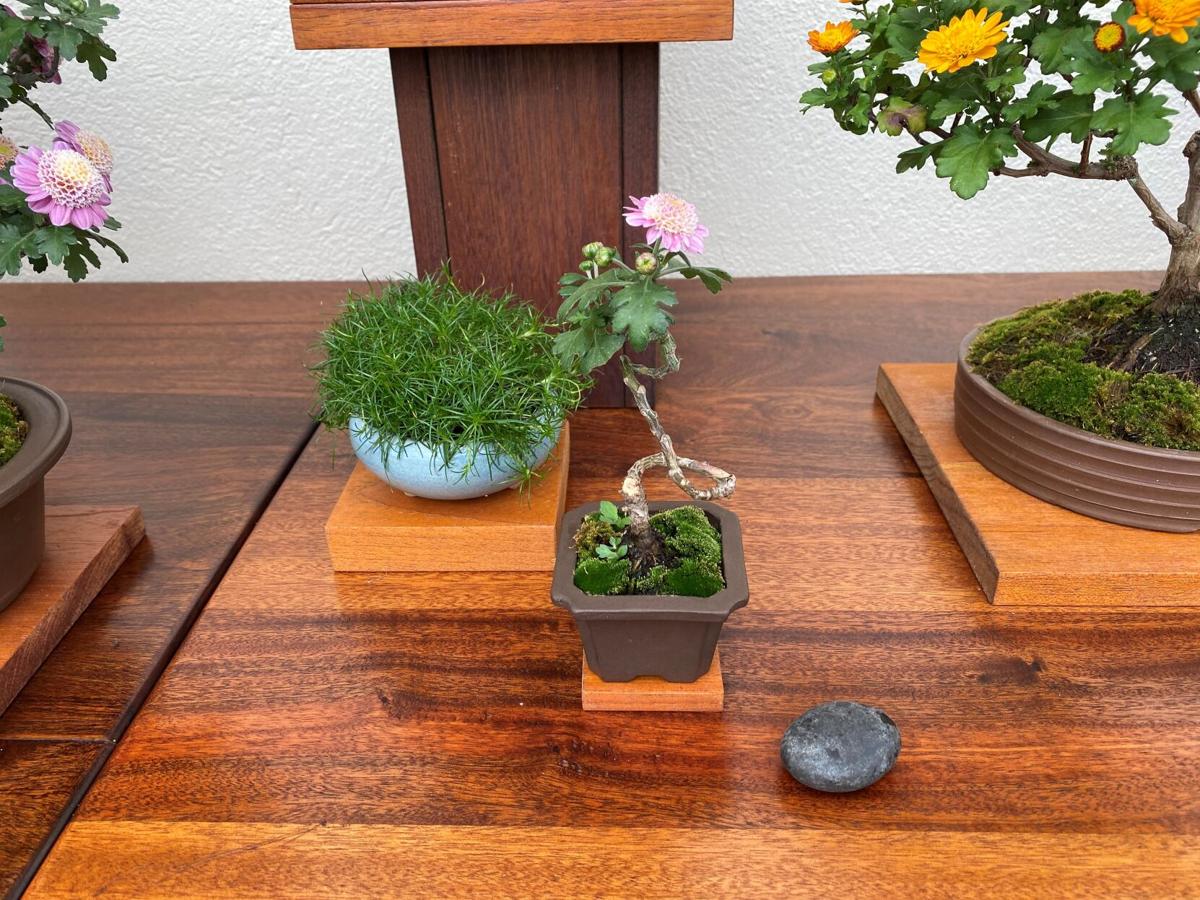 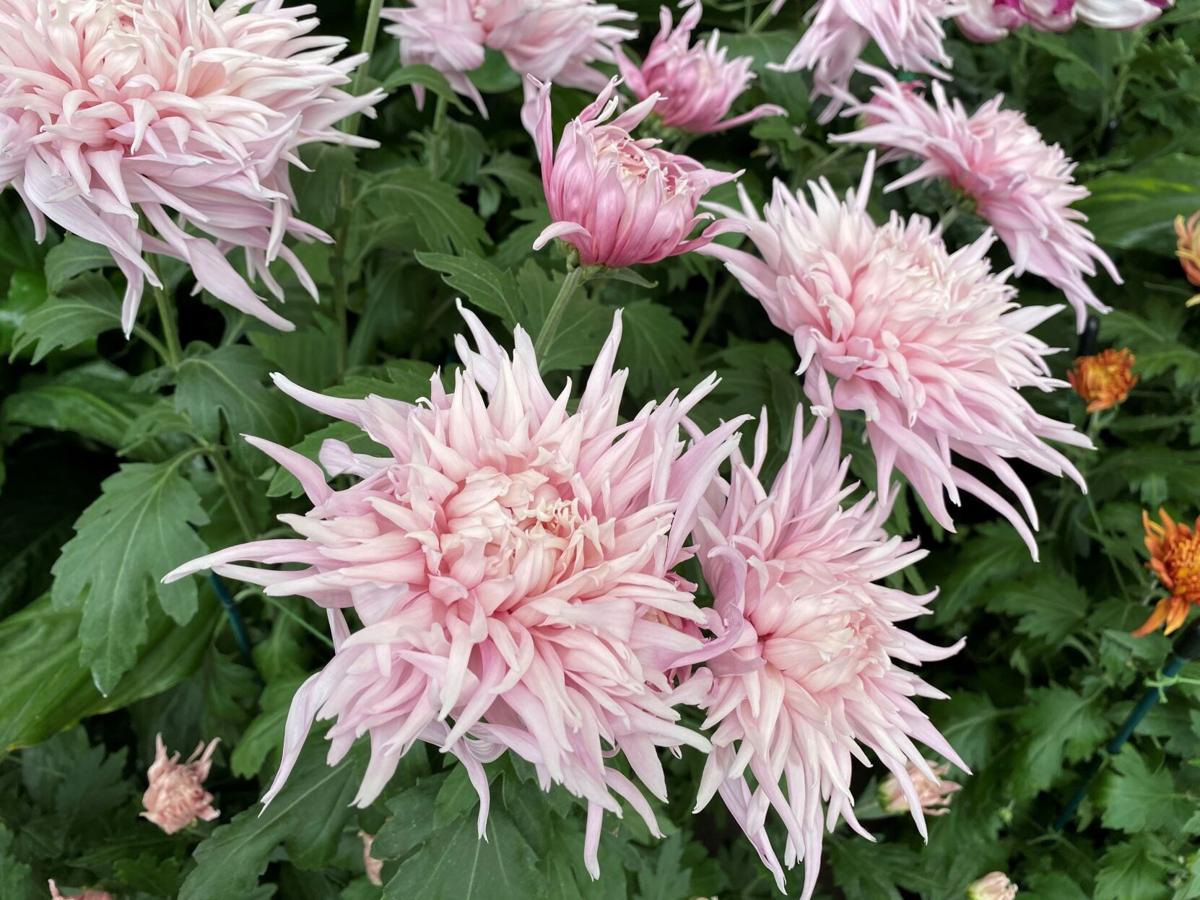 At Longwood Gardens’ conservatory this fall, the first thing visitors see is a dome of yellow flowers, 12 feet wide. These 1,500 flowers bloom on a single plant that looks like a cheery yellow mushroom large enough to need a flatbed truck to move.

“This is the largest of its type in this hemisphere,” says Jim Sutton, associate director of display design. “The only people that beat us are the Japanese. And that’s only fair because they developed it.”

Outside another greenhouse not too far away are chrysanthemums pruned down to bonsai size. One stretches just a few inches on a single stem.

Longwood Gardens’ Chrysanthemum Festival has mums giant, tiny and in between. It’s the first indoor show since the site reopened in July. While the staff was down to a skeleton crew during the shutdown, they managed to continue growing 50 different cultivars of chrysanthemums spread throughout the displays. The chrysanthemums will bloom in waves through Nov. 15.

A curtain of chrysanthemums

Growers started cultivating the showpiece Thousand Bloom chrysanthemum well before the first COVID-19 outbreak. Over 18 months, staff trained the growth, pinched and pulled the blooms through a custom metal frame. They also created chrysanthemum forms in the shape of fans, clouds, trees, spirals and more.

New at the 39th Chrysanthemum Festival is a tall curtain of mums. The same space, outside the water-filled exhibition hall, had a cascading orchid curtain a few years ago. The crew decided to do the same with chrysanthemums. Staff in the metal shop built a framework to surround the mirrored doors of the music room.

They came up with a structure filled with troughs for potted mums and yellow guzmania plants. Creeping Jenny on the sides softens the edges.

“In my mind, it kind of looks like fringe,” says Sutton, who is in charge of horticultural designs indoors.

Sutton aims to create in each walkway a different experience with a different plant palette. He has a lot of options. Longwood has more than 200 chrysanthemum cultivars in its collection. About 50 cultivars were pulled for this exhibit.

Gardeners grow most of the plants on-site and had extra mums. About a week before the exhibit opened, they decided to create two chrysanthemum meadows instead of keeping the extras in greenhouses.

“It gives people a chance to see that, wow, mums are more than just the garden style ones, little round-y, mound-y ones,” Sutton says.

The meadows and garden beds lining the walkways have a wide variety of chrysanthemums. The National Chrysanthemum Society groups them into 13 classes, defined by the shape of the bloom and its florets, each one not a petal, but a separate flower.

In the conservatory are irregular incurve mums, large single blooms with florets that fold up. They’re called football mums because of their shape. Rows of yellow “King’s Pleasure” football mums bloom throughout the exhibit.

There are spider mums with florets that hook at the end like a spider leg.

There are exotic ones that don’t fit into any classification.

A vibrant fuchsia purple anemone mum has a plush cushion center surrounded by short florets. It’s one of Sutton’s favorites.

“It’s big. It’s showy,” he says. “And it’s also not always recognizably identifiable as a mum.”

Months ago, Sutton created a plan for the show and takes into account color, shape plus which plants are looking good and which haven’t been on display for a while.

“I do this all a year ahead of time, and it would be a perfect plan if the plants could read, but we always have some changes or some adjustments,” he says. “Some things grow taller. Some things grow shorter. It is a living product. So, we make adjustments as we can.”

One of the mums this year grew 10 inches taller than expected. Growth regulator can help slow the plants a bit but adding too much will stop flowering.

So they paired the growth-spurt rust mums with tall hamelia shrubs. Problem solved.

The exhibit stretches into another greenhouse with a group of bonsai chrysanthemums, courtesy of Longwood’s bonsai grower. The tiny mums are gnome mums and cascade mums that are also used in the larger forms. Here, they are pruned into single stem arrangements and a few miniature forests.

Outside the potting shed are two new style of chrysanthemum that Sutton spotted on a research trip to Japan.

One is an edo mum that Sutton describes as a flower with a bad hair day.

The other one is an Ichimonji mum with a bloom that’s large and flat like a plate.

“In Japanese culture, they would massage this petal and fill it with cotton balls to get the flower to be as big as a dinner plate,” Sutton says.

It was one of the few types of chrysanthemum not in Longwood’s collection.

That changed when staff brought a few to the garden. The plants survived their imported quarantine and bloomed here for the first time this year.

After more research, they might shine in an upcoming festival. 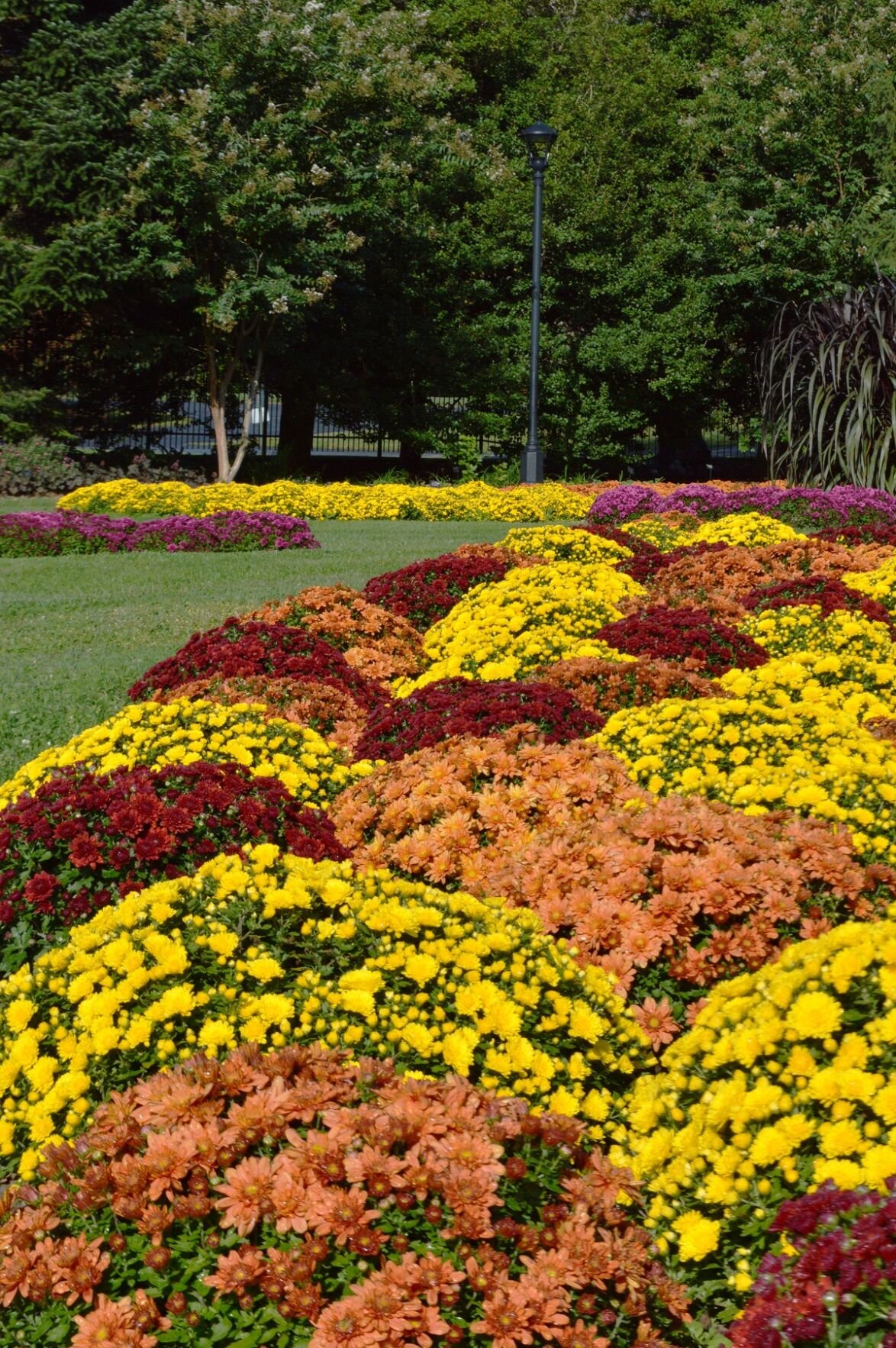 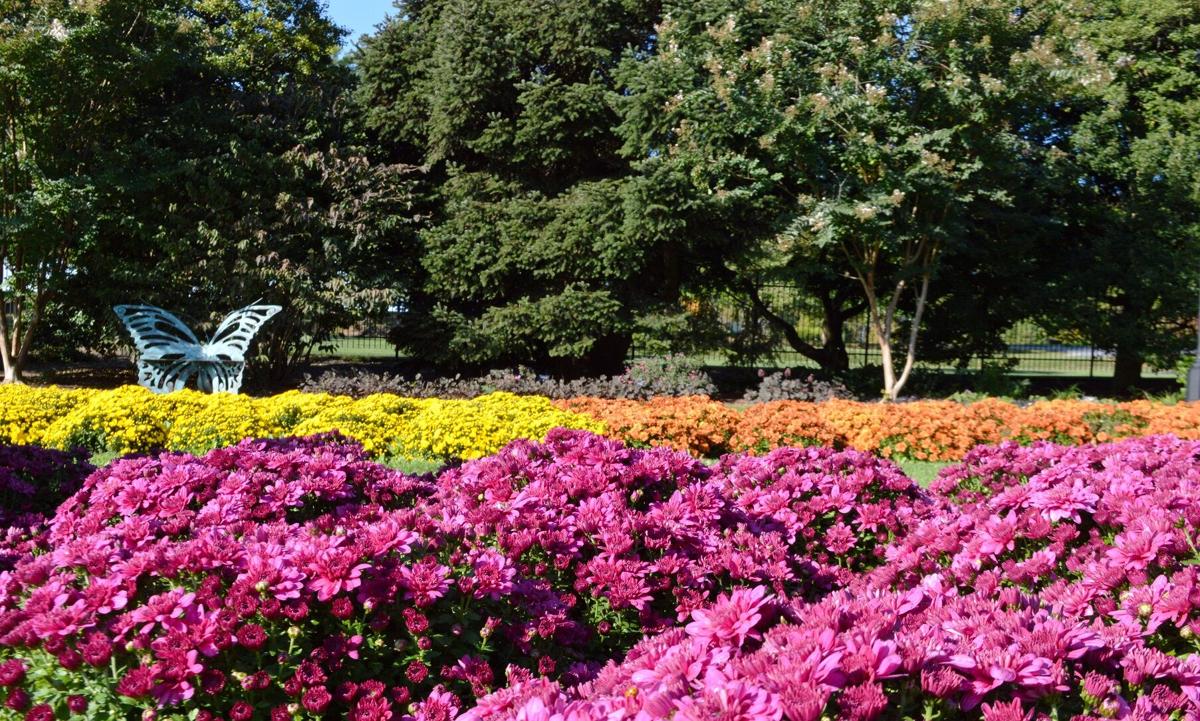 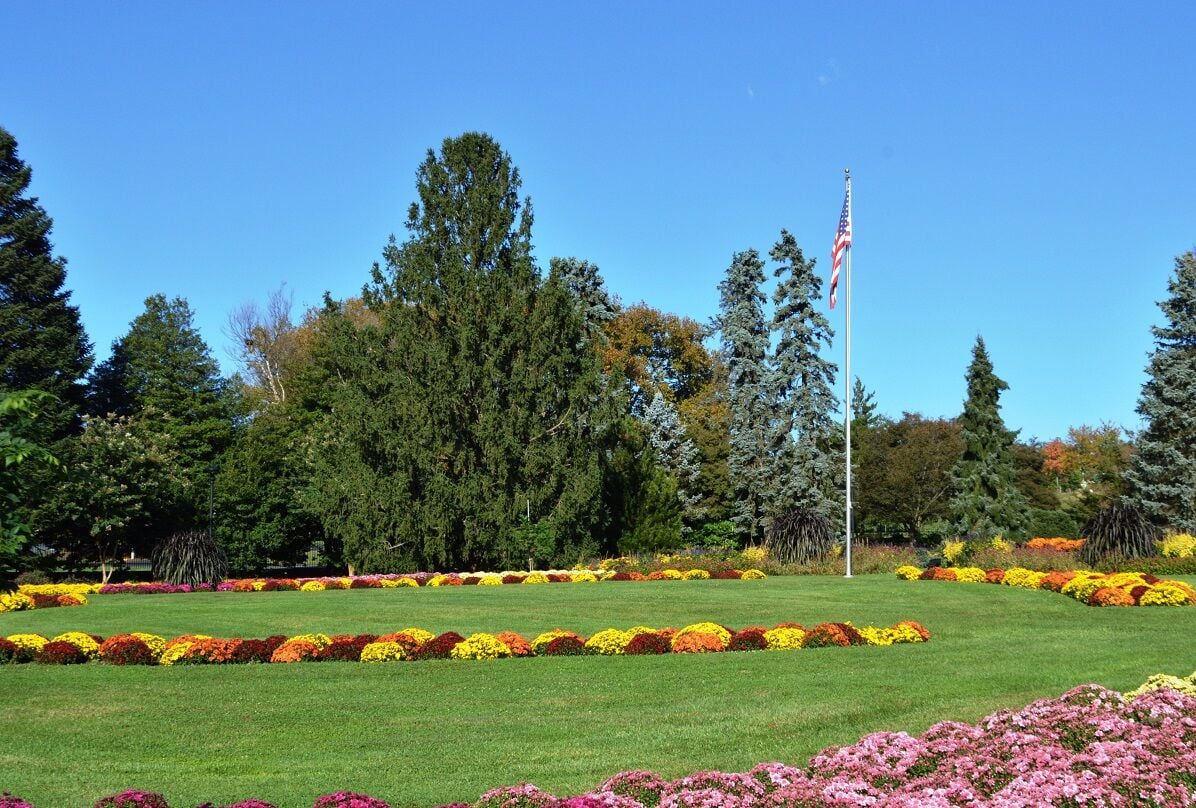 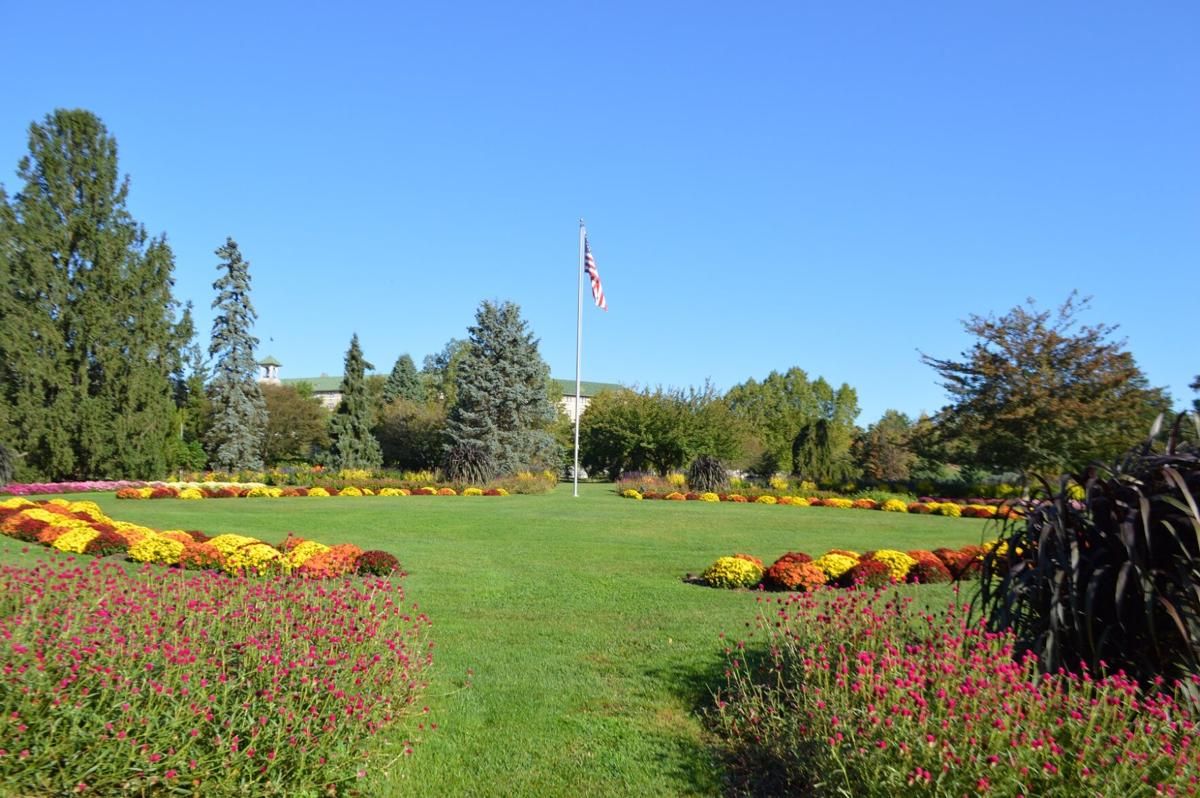 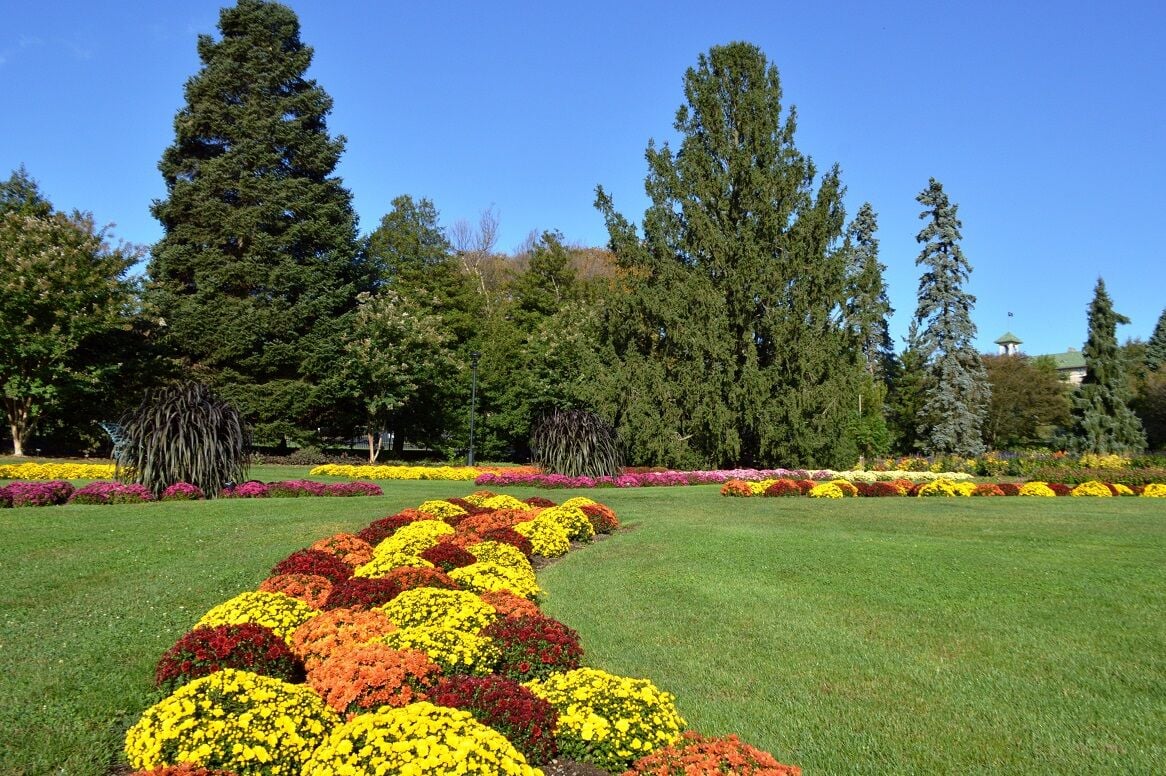 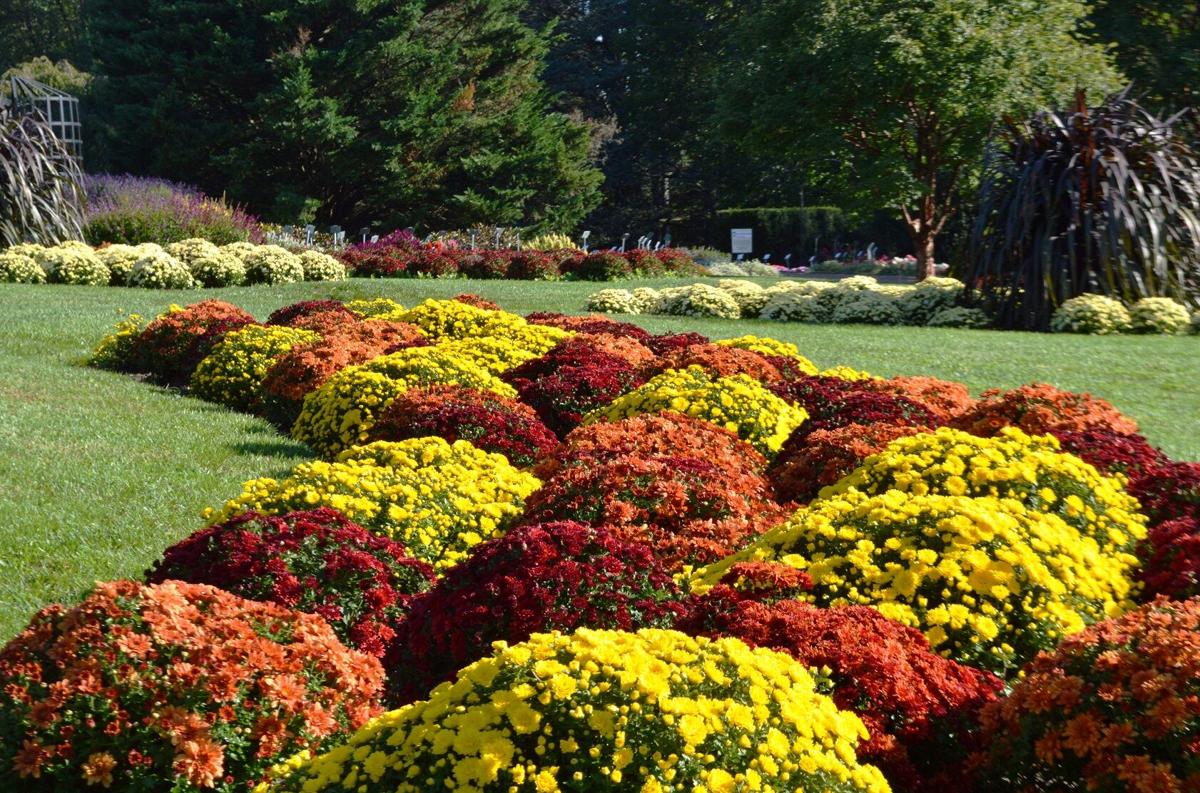 Mums in bloom at Hershey Gardens

What: Longwood Gardens’ conservatory has chrysanthemums and other fall plants on display, including a Thousand Bloom Chrysanthemum.

Cost: Tickets ($25 for adults) and member reservations can be made online at longwoodgardens.org.

Longwood Gardens closed its doors to the public during Pennsylvania’s shutdown.

The plants in the conservatories and in the production house needed care, even with a skeleton crew.

Also, students and volunteers who usually help weren’t on-site. So, administrative staff were called to help in the horticulture department.

The Chrysanthemum Festival is Longwood Gardens’ most labor-intensive exhibit because of the attention the plants require. Most of the plants are grown on-site through tissue culture or stock plants.

The mum production continued, but some changes were made because of low staff, says Jim Sutton, associate director of display design.

For example, growing the chrysanthemums for the large hanging baskets is labor-intensive. Instead, staff switched to growing begonias for hanging baskets.

The layout of the exhibit also changed to prevent people from gathering together. Now, plants and arrangements are spaced out.

Longwood opened to the public in July. The site is now operating at about 35% capacity, says Patricia Evans, director of communications.

The 450-acre site has room for people to keep their distance, she says. Masks are required indoors and in high-traffic outdoor areas, like around the fountains.

Imagine it’s a late fall day in a just-established Lancaster city, apples harvested from a sprawling orchard ready to be pressed inside a bric…

The voting instructions hung on the wall, printed in English and Spanish. “Ballot box” is Spanish urna — recognizably “urn.” Both English and …

Olympic figure skater and Quarryville native Johnny Weir was back to his winning ways on ABC's "Dancing With the Stars" Monday night, ending t…

Your garden's filled with faded plants; Here's why skipping fall cleanup saves time and the environment

Cross “clean up garden beds” from your to-do list this fall and you’ll do much more than save time.