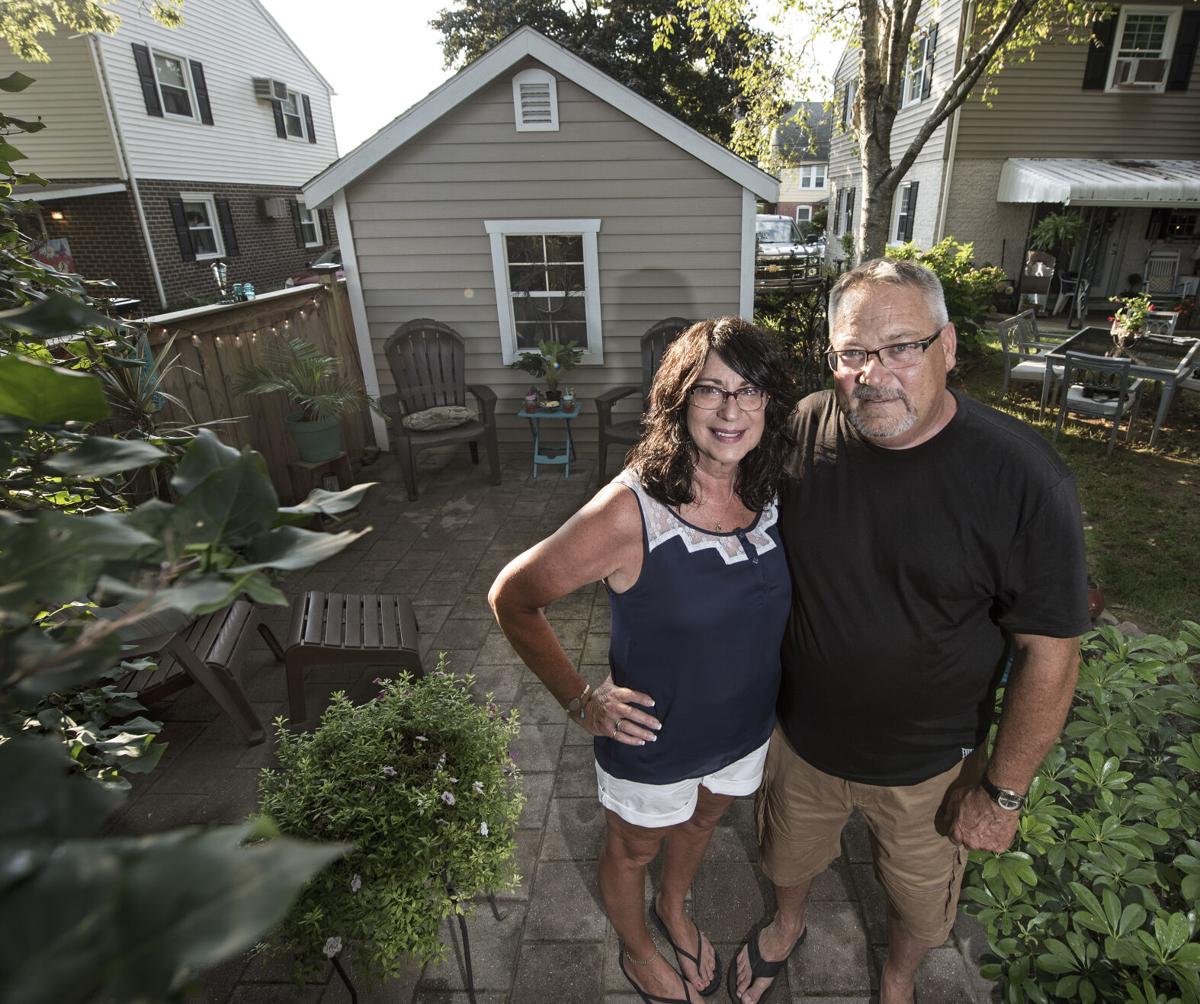 Randy Culley built a paver patio a few hours at a time. He and his wife Cathy now have an upgraded space to relax. 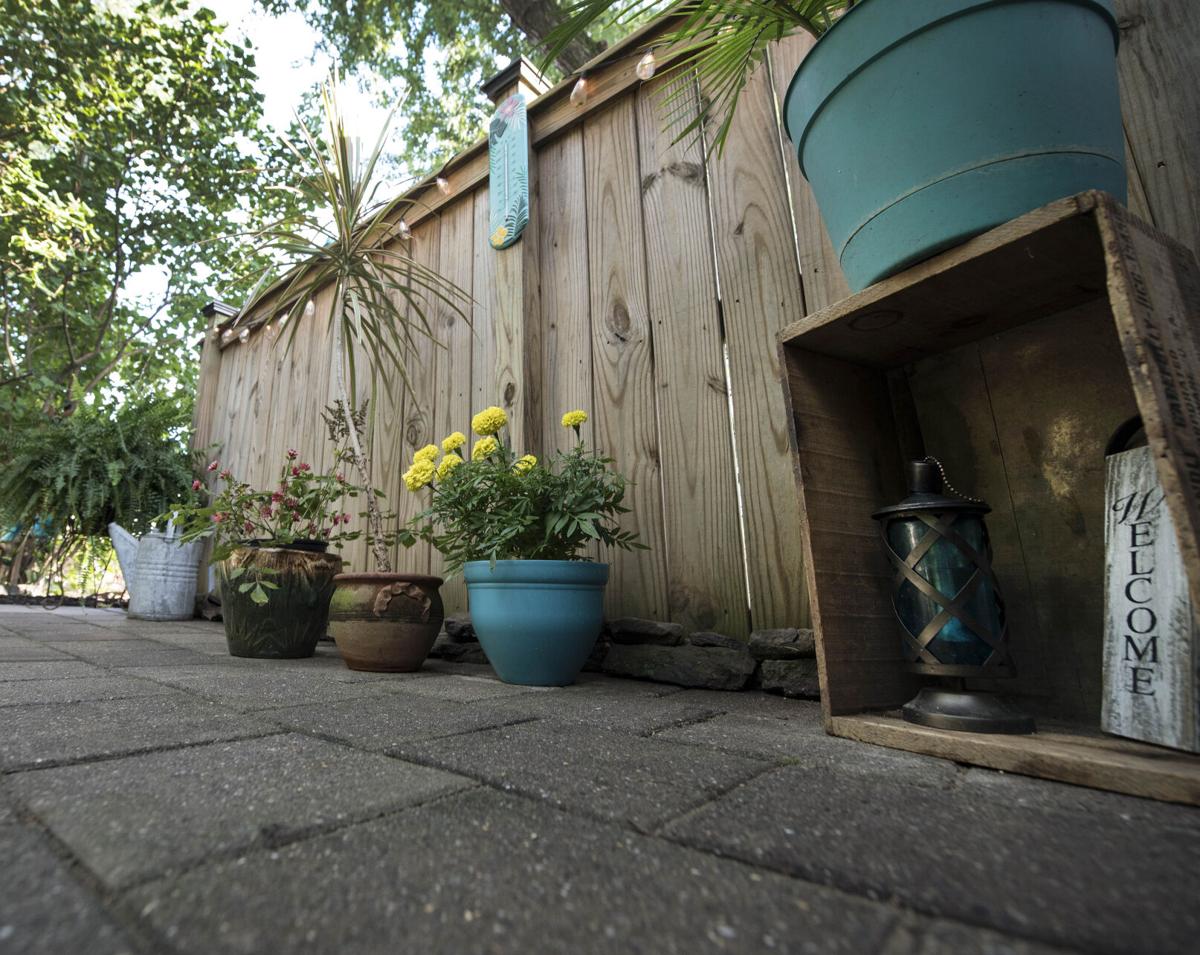 cathy and Randy Culley, on their new stone patio, at home in Lititz Monday August 24, 2020. 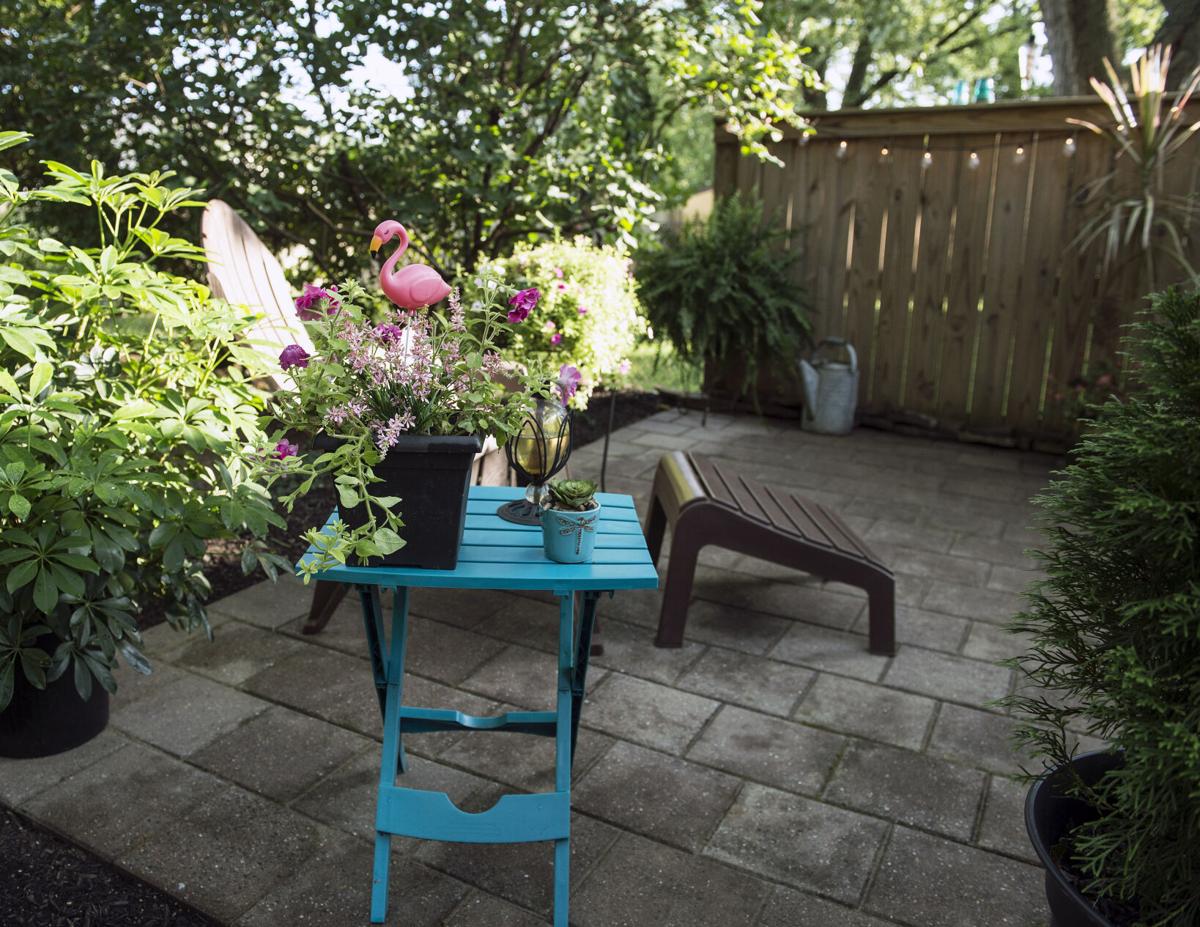 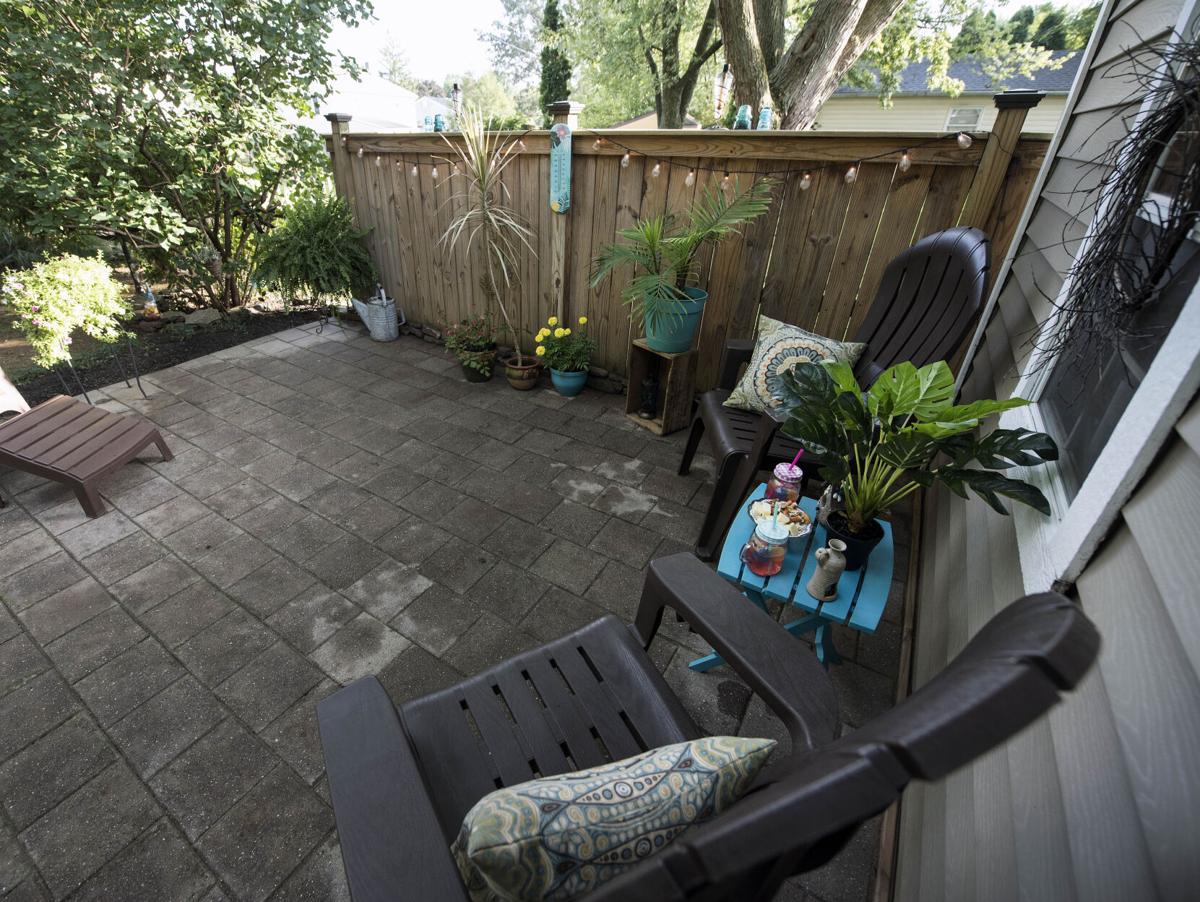 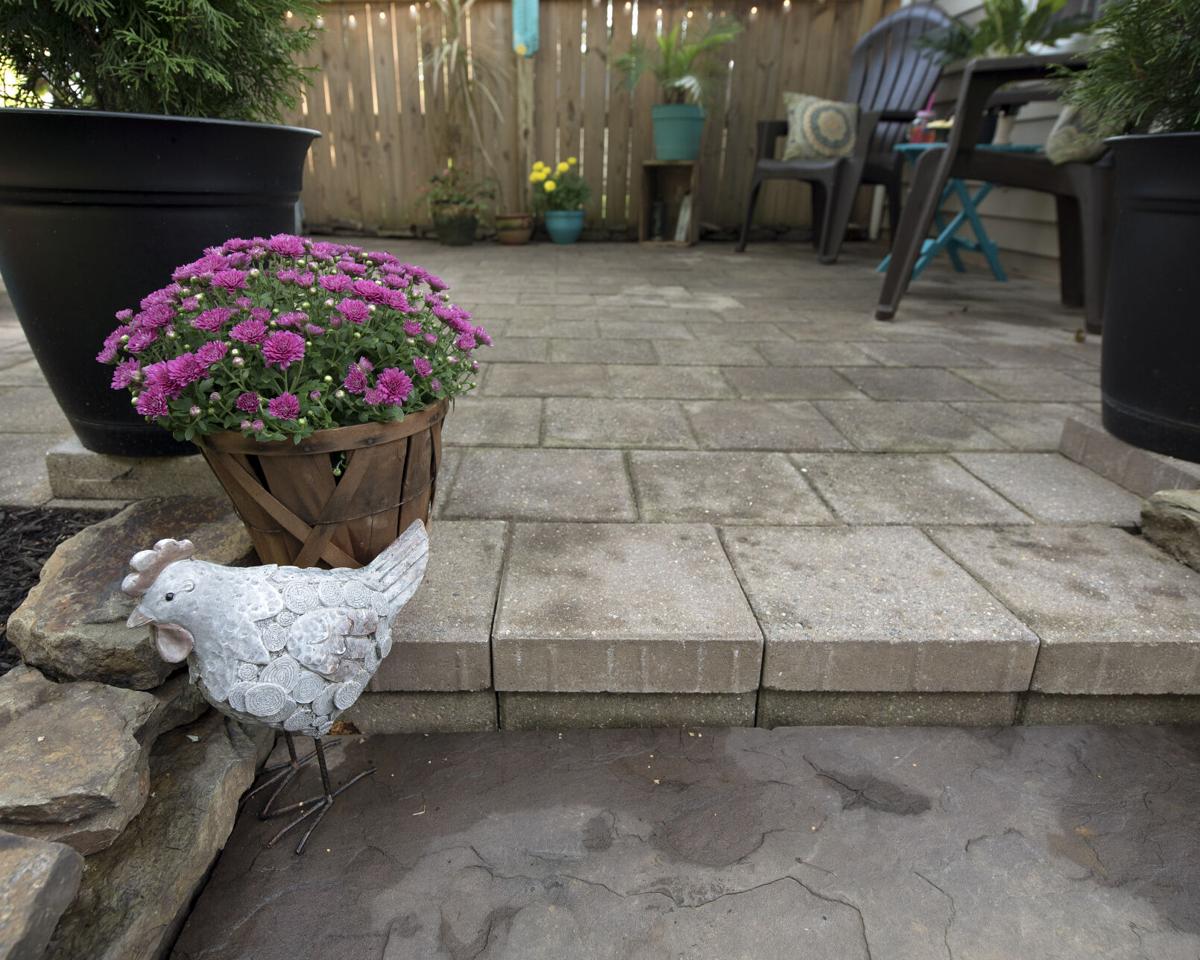 The spot behind the Culleys’ shed was tricky to grow turf grass. The space may have got a little muddy after rain, but still, this secluded corner was their favorite spot to relax outside their home in Lititz.

“One day, I’m going to build you a patio,” Randy would say.

That sounded great, but Cathy likes projects when they’re finished. She hates the mess and chaos in the middle of creating something new.

When someone spotted the materials they needed online, Randy decided to go for it. Even though he works two jobs, he built a paver patio a few hours at a time. The couple now has an upgraded space to relax and the spot is no longer off-limits after a rainstorm.

Use the slider to see before and after images of this home renovation project. Show before
Show after

The Culleys have lived in their home for 34 years and raised two daughters there. When the weather’s nice, they often end the day outside, especially when Randy’s not working a night shift driving a milk truck. Cathy is a bus driver for Warwick schools.

Trees shade their favorite spot in the back yard, which helps the couple enjoy the space even on the hottest days. However, the shade prevents anything from growing in that part of the yard.

The push to renovate the space happen started when the Culleys replaced the siding on their home a few years ago. They replaced their shed and had it covered with siding to match.

Randy continued the rehab by replacing the chain link fence behind the shed. With help from their son-in-law Ryan Kline, he built a wooden fence to the left of their spot. The fence is just tall enough for them to feel secluded when seated but not so tall to overwhelm the space.

The next project was the patio Randy always promised, but Cathy worried about the disruption.

“I hate the mess. I love when it’s done, but I’m one of these people that has a type A personality,” she says. “I like everything to be in order and in its place.”

Randy had lots of options of how to create a new patio. He drives a cement mixer, so he knew pouring a concrete slab would be a simple choice. However, the patio’s pretty close to a favorite tree, a white birch. They worried that covering the ground would divert water away and harm the tree.

They decided adding pavers with crushed stone beneath and sand in between would allow rainwater to drain and not run off.

Here are the retail stores that opened, closed in Lancaster County in August [retail changes]

Their son-in-law Steve Zickefoose loved the idea and found pavers for sale on Facebook about a year ago. They did the math and figured they needed 365 pavers to fit the space. There were more available from the seller so Randy bought 430 for about $200.

With extras, he added a few rows to the patio.

“Until you get your furniture (in place), nothing’s ever big enough,” Randy says.

Now there’s room for their Adirondack chairs plus a few planters on the edge of the patio.

Few hours at a time

To overhaul the space, first, Randy used a line level with strings to level the ground while keeping a slight slope.

Then he tamped down the stone, added a layer of river sand and got his pavers ready.

Starting in the corner of the fence and the shed, he placed the pavers, row by row, tapping each paver into place.

The new patio is tall enough for a step. They found a large stone at Winning Touch Nursery in Stevens.

Randy poured river sand between the squares and let it settle over the winter. A few weeks ago, he power-washed the sand out and added polymeric sand suggested by a friend who’s a contractor. When mixed with water, the sand hardens and still allows water to flow through.

“It’s actually like glue. The ones on the end?” Randy says, pointing to the steps. “You can’t lift them up.”

With two jobs, Randy worked on the patio a few hours at a time. He finished by late October, the end of their patio season and before his annual trip to hunting camp for deer season.

A space for memories

Around the patio edge, Cathy added periwinkle, a perennial ground cover with a tiny purple flower. There are tropical plants and a fern thriving in pots plus a few faux plants that don’t mind the shade.

The whole project was done for less than $1,000, including the patio, the fence and plants.

This spring, they were able to enjoy their new space.

Before the patio renovation, after a rain, the space was off-limits for a bit because it would stay wet and attract mosquitoes. Now, the space dries out quickly and they can spend time there even after a rain.

Behind their two chairs, tucked in the shed are a few extra seats and a fire pit. Cathy cooks chicken over the fire, and the fire is perfect to make s’mores with the grandkids.

Most often, this is a spot perfect for Cathy and Randy. It’s a place for relaxing and watching birds.

Yet this project’s more than just making the space prettier. The Culleys are eager to talk about building materials and plants, but they aren’t afraid to have deeper conversations, too.

They went back-and-forth over who would die first. Randy says he’ll go first because he doesn’t want to lose Cathy.

“He always says that this will be a space that, when he’s gone that I can sit and have good memories,” Cathy says, holding back tears.

“I built this to honor my wife,” Randy says.

He's the man behind the gnome village in Akron on the Warwick to Ephrata Rail Trail [photos, video]

Show us your renovation

How have you transformed your patio or deck? LNP | LancasterOnline wants to know about your outdoor renovations for future coverage.

Send a photo and a short description about your outdoor space to enegley@lnpnews.com.

I am the first step in a long journey from finding an heirloom you no longer need to putting money in your pocket by having sold it online.

Home renovation shows are the life’s blood of HGTV. After all, who doesn’t want to watch someone transform a neglected dump with outdated lino…

The Pathways Institute for Lifelong Learning will begin its fall courses on Sept. 29, with the courses running through Dec. 16.

Teenagers in Lancaster County are invited to a Zoom call to learn more about Aaron’s Acres Angels, a group of young people who participate in …

Several years ago I had a dream of creating an organization called Elder’s Voice. I envisioned it to be a group of men and women of all ages, …

Cause of Wednesday fire in Mount Joy that spread to several garages undetermined: fire marshal

Henrietta Heisler’s mother sensed early on that her daughter was destined for a career in interior design.

Home features that sell and the ones to avoid

These features and descriptors were on home listings that sold fast and at higher prices.