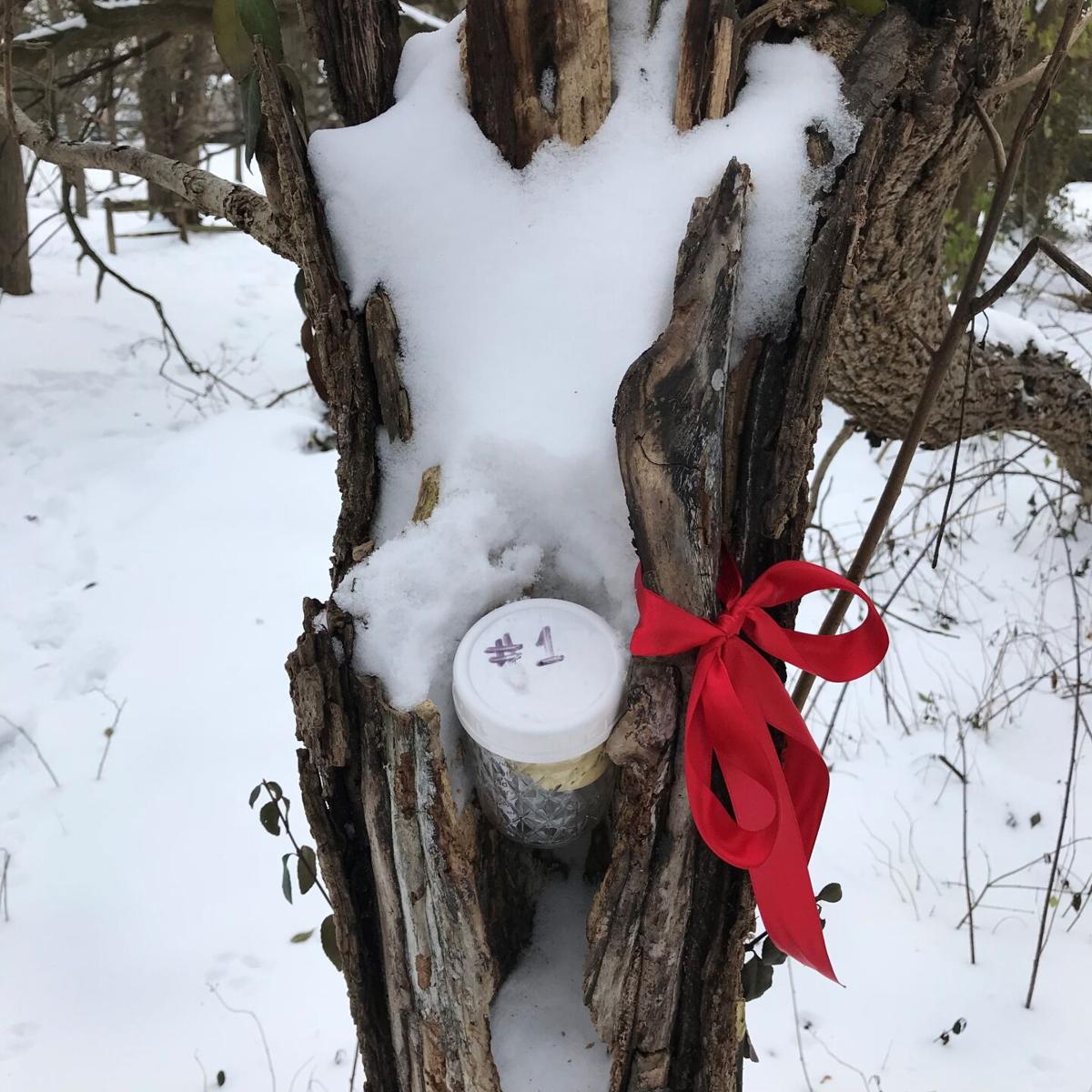 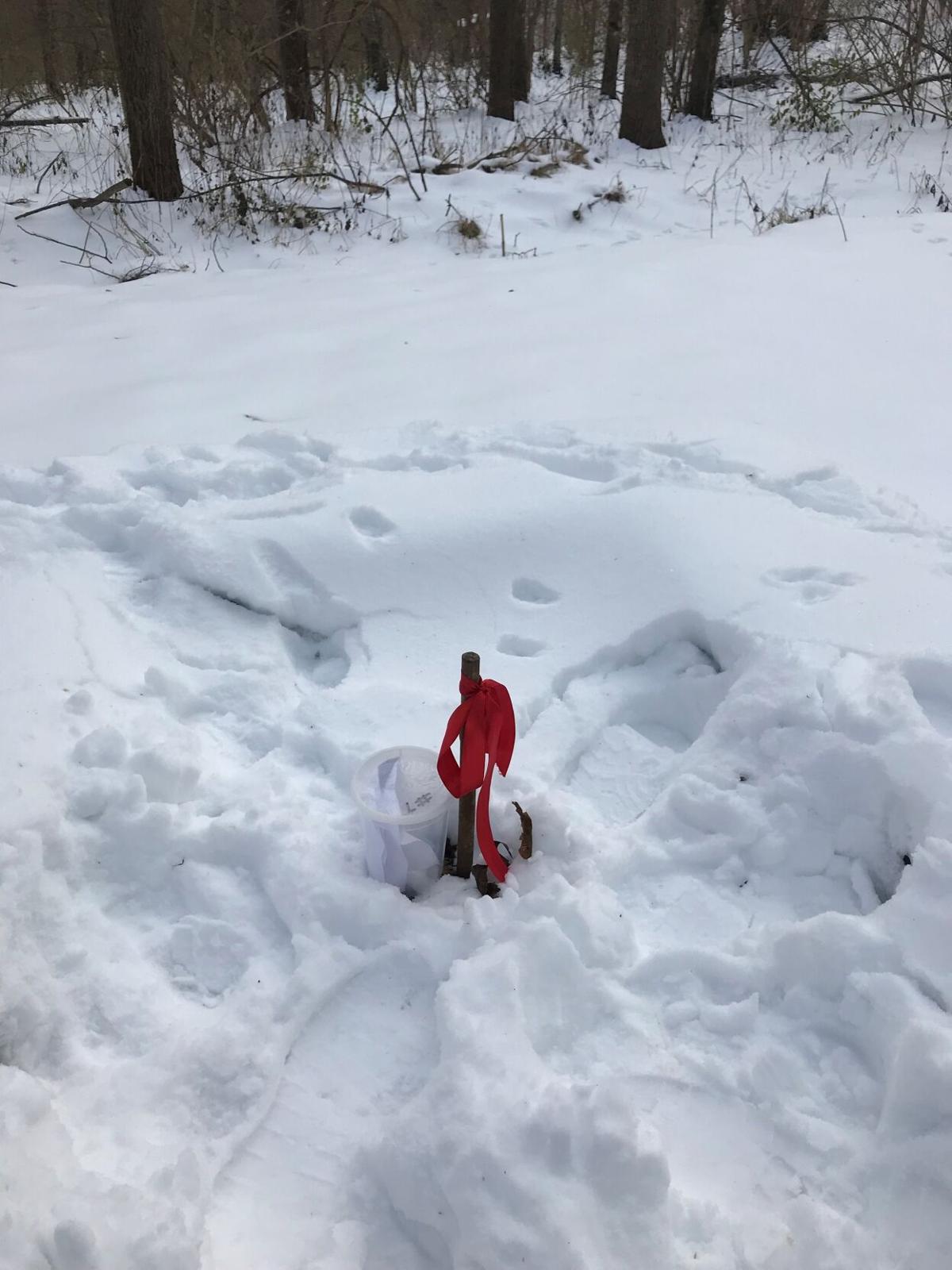 Footprints surround a red ribbon that marks another clue in Lancaster resident Lisa Roth Walter's holiday scavenger hunt. The recent heavy snowfall did little to deter others from enjoying the walk. 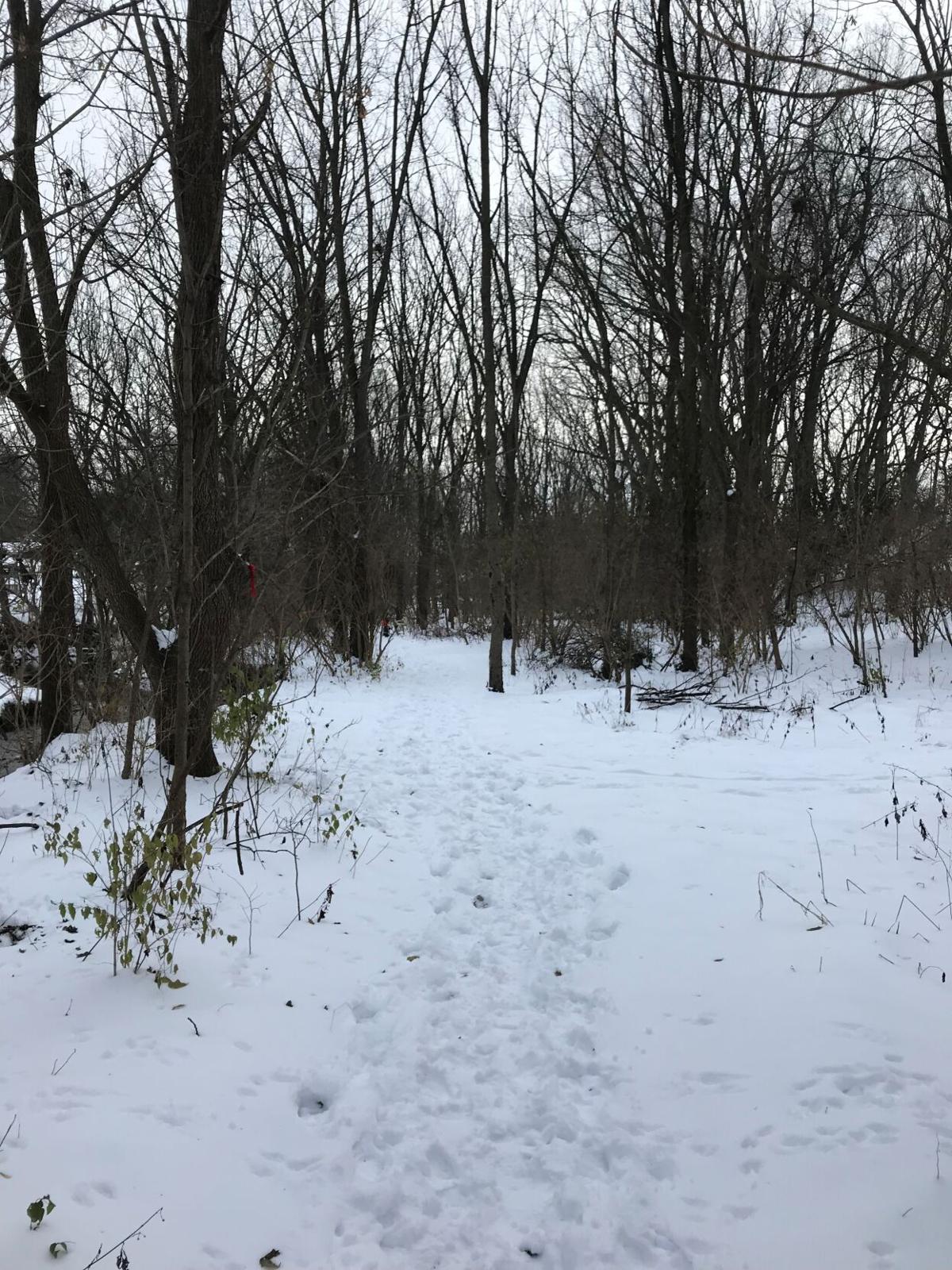 Part of the beaten path on Lisa Roth Walter's Christmas-themed scavenger hunt near her home in Lancaster County. 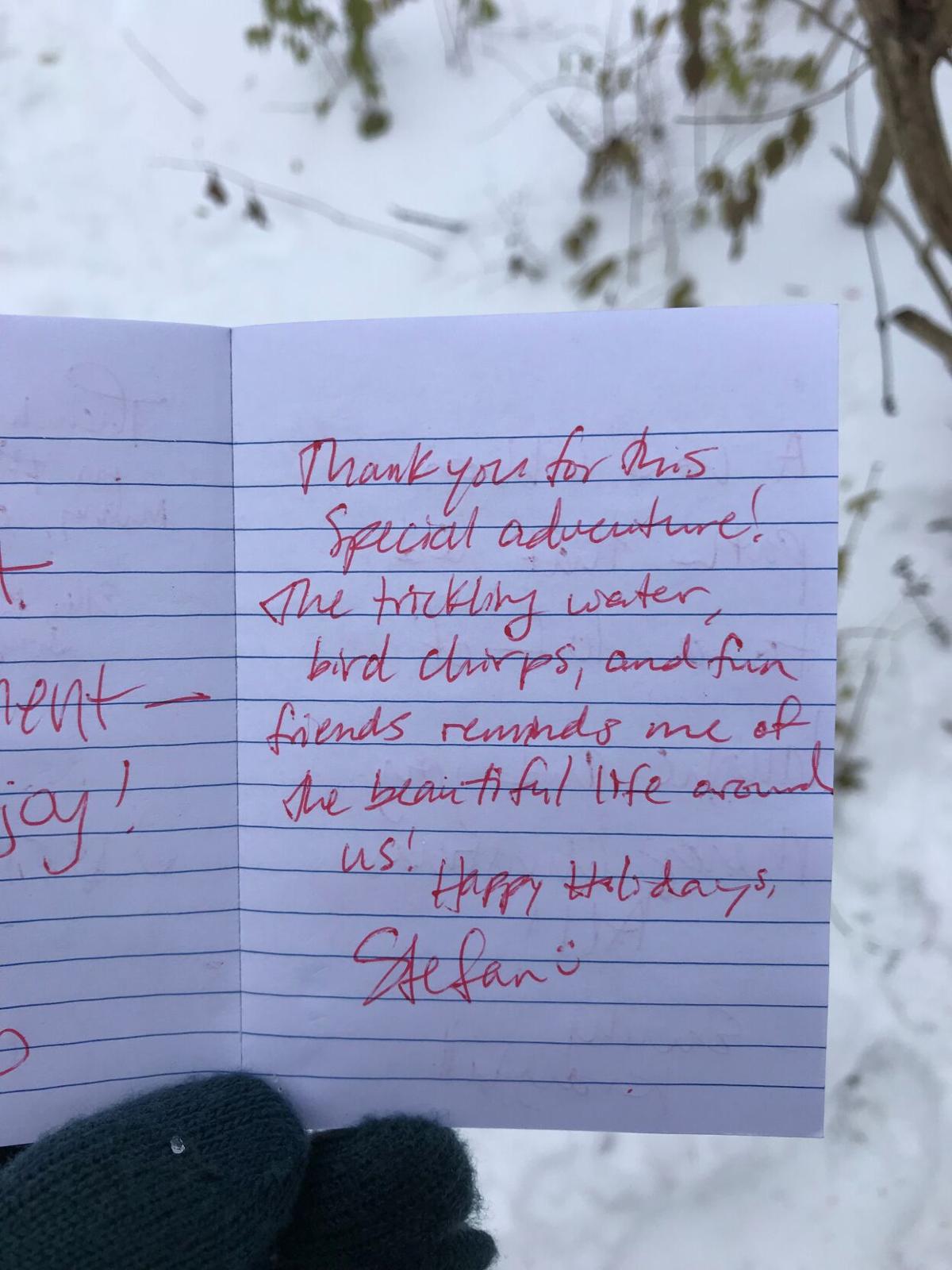 One of the many notes left in a guestbook along the scavenger hunt trail. 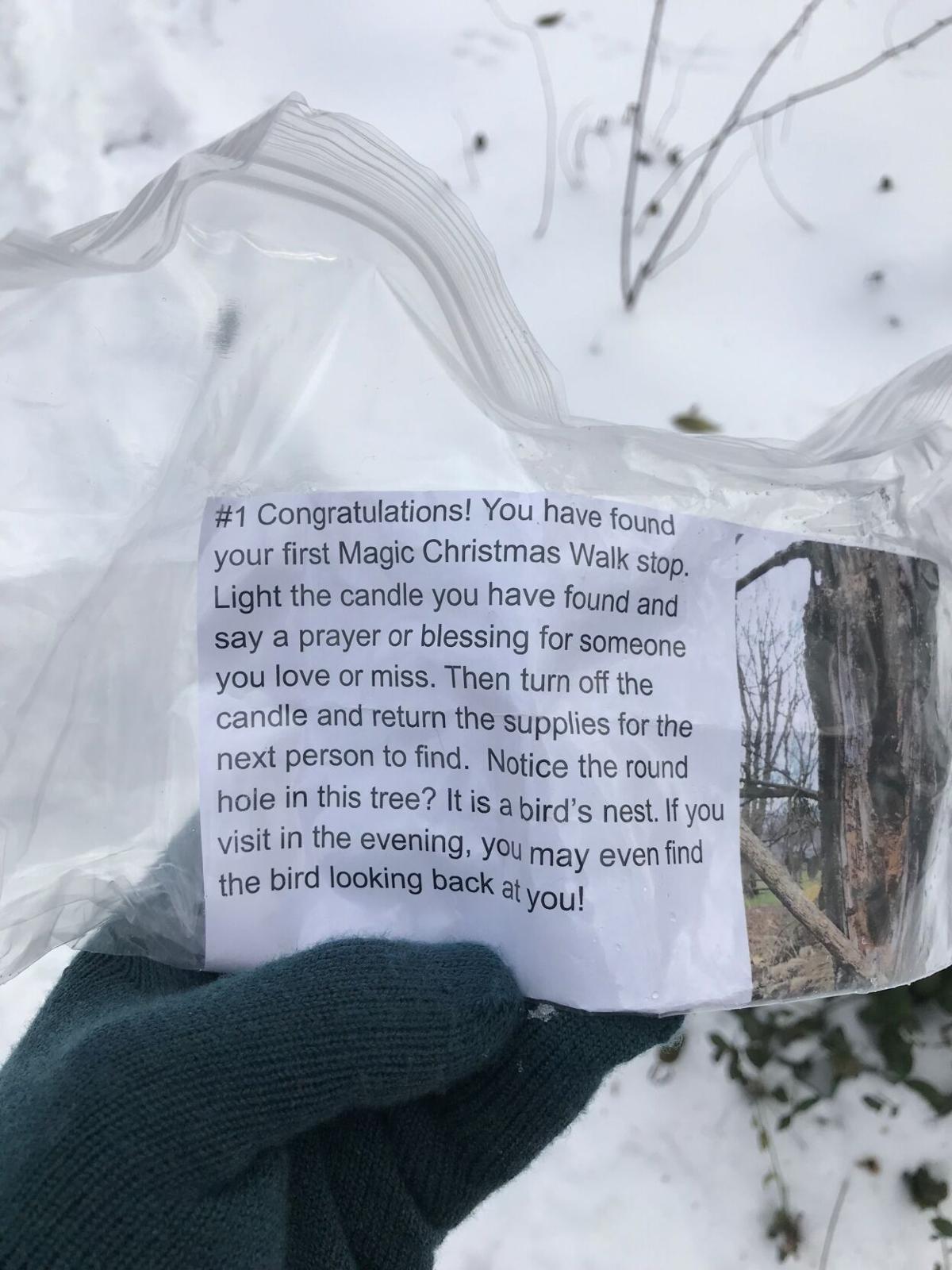 The "Magic Christmas Walk" begins with a reminder to pray for those who can't be with us during the holiday season. 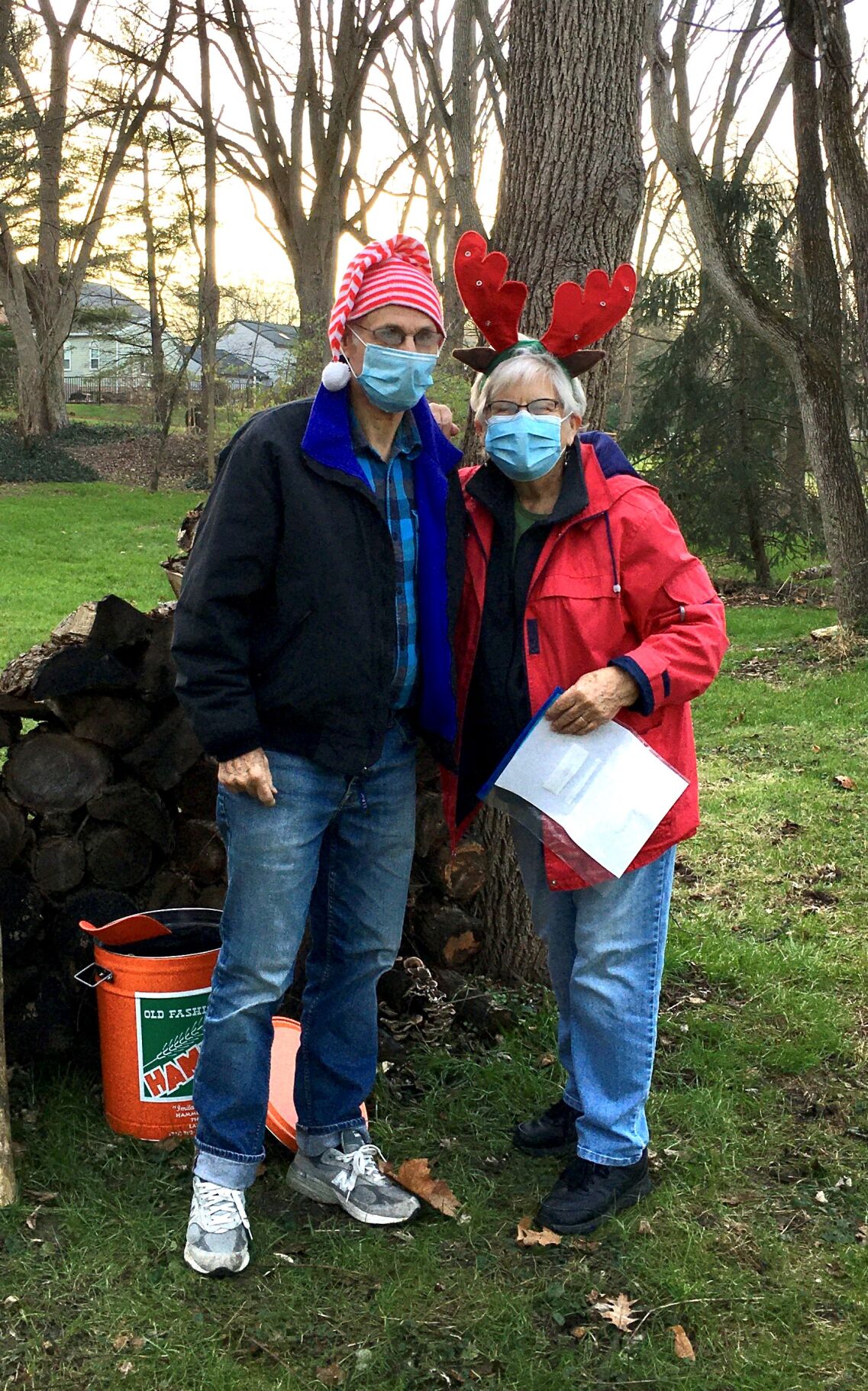 Glen and Annabelle Roth, the parents of Lisa Roth Walter, dress up and participate in the Christmas-themed scavenger hunt.

One of the many notes left in a guestbook along the scavenger hunt trail.

The "Magic Christmas Walk" begins with a reminder to pray for those who can't be with us during the holiday season.

Glen and Annabelle Roth, the parents of Lisa Roth Walter, dress up and participate in the Christmas-themed scavenger hunt.

That was at least my feeling when I saw an email from a co-worker about a family near Rader Park in Lancaster County who, in an effort to replicate some lost sense of Christmas spirit, created a Christmas-themed scavenger hunt.

A walk in the snow doesn’t intrinsically hold any extra meaning. However, if it’s a walk in the snow, and it’s the week of Christmas and there’s a scavenger hunt, well, the magic nearly summons itself.

According to the email, Lisa Roth Walter of Lancaster was feeling sad after recognizing that Christmas with her family, friends and fellow churchgoers at Community Mennonite Church of Lancaster would look different this year due to COVID-19 quarantining. To indulge in the spirit of the season in a responsible and creative way, Roth Walter, along with her husband Steve, her son Nick and daughter Savannah created a small scavenger hunt that started in nearby Rader Park and ended near their backyard.

That scavenger hunt began for me with a simple email.

The only direction in the email said to start near the small pond near the Rader Park sign. Surely enough after I arrived at the designated spot, I saw a small plastic bag with a red ribbon attached.

“You have either been directed to this spot, or you have happened upon it,” the note begins. “Either way, you are now welcomed to start a magical Christmas walk.”

What followed was essentially a 15-stop, nearly half-hour traipse through some folks’ backyards on a frosty Sunday morning. Each clue was denoted with a red ribbon, and most ribbons in the stops that followed could be seen in advance. Not knowing what to expect, I approached the first small jar, which contained a note and a small electric candle.

“Light the candle you have found and say a prayer or blessing for someone you love or miss.”

I was surprised that the treasure hunt began on such a serious note, but I nevertheless indulged, saying a few silent words for my grandmother and cousin Michael, since this will be my extended family’s second Christmas without them.

The note’s clue led me on to a nearby tree containing another piece of paper, this time with the story “I’m Not Scrooge…I’m Just Broke,” originally printed in “Chicken Soup for the Soul: Christmas Cheer.” The story’s message is obvious, but often overlooked – it doesn’t matter the gift you receive, it’s the love and thought that matter.

Feeling much like a former curmudgeon in a “Scrooge”-like rip-off movie, I made my way through the rest of the hunt, my cheer rising all the way. For every serious reminder of the season, such as a manger scene built into a neighbor’s chicken coup, there were lighthearted stops too, like a command to jingle some provided bells and another stop containing Christmas accessories for a makeshift selfie station.

Roth Walter provided her phone number on the initial card in case anyone attempting the treasure hunt got stuck and needed help, so I called her the next day.

“The unexpected joy of it was seeing people come through it,” Roth Walter said, describing the opposite feeling people usually get when unexpected people meander through their backyards. “When they would get to the parts that went through our backyard, sometimes we’d see people making their way through. It kind of helped me feel connected to people.”

Though the treasure hunt will come down in the days following Christmas, Walter says she’s been buoyed enough by this experience that she hopes to do it again next year, pandemic or not.

“Someone at the church said to me, ‘You know, even though we did it at different times, it was fun to feel connected, like we were sharing an experience,’” said Roth Walter. “It just brings you back to that basic thing of when you give to others, the unexpected gift comes back to you. When you see people feeling joy, you feel that too.”

A Christmas cactus can last for generations; how to grow your own and get more blooms

If you live in a suburban neighborhood, you’ve probably seen your fair share of inflatable Christmas decorations.

The National Weather Service has issued a flood watch in Lancaster County starting today, Christmas Eve, and remaining in effect through Chris…

Goodbye 2020: Continuing our countdown to 2021 with some Shout Outs from the year [video]

If you look hard enough, you can find some good in 2020. As this year draws to a close, we are taking a look back to highlight that good.

More than 300 Lancaster County residents have tested positive for COVID-19 in the last 24 hours.

Make your own jellyfish air plant terrarium, mix suet for the birds: 51 classes for plant lovers to try in January

If you want to make a floral arrangement, learn how to raise chickens and keep houseplants alive, there are dozens of classes to check out, online and in-person throughout January.