Matthew Graybil’s career as an award-winning pianist can be traced back to a single cassette tape.

On long car rides, the Willow Street native and his older brother Jonathan took turns choosing the entertainment. During one lengthy trip, Jonathan repeatedly chose “Mr. Bach Comes to Call,” an educational children’s tape about the famous composer’s life and selections of his most popular works.

That was the younger Graybil’s first exposure to classical music, but it wouldn’t be his last. Graybil started studying the Suzuki method at age 6. At 12, he won the Women’s Symphony Association’s Junior Instrumental Competition. He studied at the Juilliard School in New York City, where he still lives when he’s not on the road performing. The New Yorker magazine once described him as an “exceptional young artist.”

Now 32, Graybil is still expanding on his talents, embracing the joys of chamber music and using his platform to expose more young people to classical music. On Friday, he’ll return home to Lancaster County for a performance at the Trust Performing Arts Center with violinist Rhiannon Banerdt as part of the Lancaster International Piano Festival’s concert series.

While he’s called New York home for more than a decade, Graybil is quick to point out the impact Lancaster’s musical community had on his success.

“Lancaster has an incredible community that was always very supportive of young musicians like myself, and I'm far from the only person from Lancaster County in the music field,” Graybil says. “I'm very fortunate to have the hometown support, the willingness to help create opportunities for young musicians."

Graybil’s many teachers included the late Cheryl Yerkes and the late Mary Vyner, both of Lancaster, and the late Harvey Wedeen of Philadelphia, who chaired the keyboard department at Temple University’s Boyer College of Music and Dance.

The lessons with Wedeen were a commitment for the entire family, as Graybil’s parents would take him to Philadelphia weekly for the meetings.  But Graybil says he was full of  “obsessive energy" for his craft, and his parents stressed the importance of practice.

“They would emphasize that if I wanted to be good at it, that would mean that I had to work hard as well,” Graybil says.

It wasn’t long before others started to notice that effort. During one competition when Graybil was a preteen, Lancaster Symphony Orchestra maestro Stephen Gunzenhauser was captivated by the young pianist’s performance.

"Despite his age, despite his youthfulness, he sounded like an accomplished artist,” Gunzenhauser says. 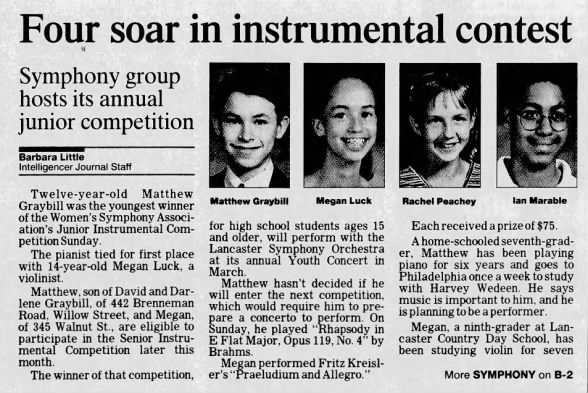 Several critics have noted that Graybil’s musical thumbprint has a certain sensitivity and subtleness, and an ability to feel the more delicate details of a piece. Gunzenhauser says that’s reflected in his personality as well.

"What he is as a person is what he is as a pianist, which is a thoughtful, sensitive human being without necessarily the bling-blang, but with a very strong and beautiful message,” Gunzenhauser says.

Gunzenhauser lost touch with Graybil over the years, but reconnected a few years ago at a house concert hosted by Lancaster Symphony Orchestra supporters. He was blown away by Graybil’s performance there, too, and later hired Graybill to perform at his Endless Mountain Music Festival in Wellsboro, Tioga County.

He’s also released a handful of recording projects and has contributed to “Violins of Hope,” an album featuring Jewish music and violins restored from the Holocaust.

Graybil’s performances have taken him all over the world, from Paris to Chicago to Mexico City. He often tries to incorporate an educational outreach component with each show to get youngsters exposed to (and hopefully excited about) classical music. 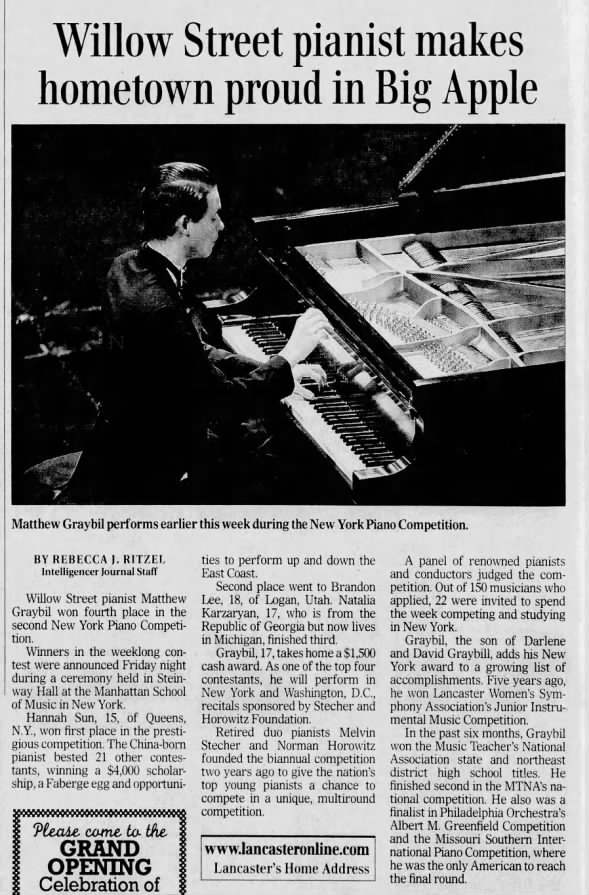 "Even if it's just one person you connect with, be moved by what they hear or relate to the story of it, that's ultimately why I’m a musician, why I do what I do,” Graybil says. “That can be one of the most fulfilling feelings, is doing something like that in a school and have a kid come up to you and sort of open up to you."

“We so often struggle with sort of an elitism problem in classical music,” Banerdt says, noting that it’s often associated with people of a higher social class or older generation. But he isn’t satisfied with the status quo.

“Sometimes we have to go out and work a little bit to dispel that to try to show we're humans and music touches all of us, and people who maybe don't have access to it as much are the ones that need it the most,” Graybil says.

At Friday’s show at the Trust Performing Arts Center, Matthew Graybil will be joined by his frequent collaborator, violinist Rhiannon Banerdt. He says the program will “highlight the interplay between Russian and French sensibilities.”

The Prokofiev piece is a brooding and haunting number. There’s a wistful violin iteration paired with solemn piano chords that listeners will hear twice in the piece.

“Prokofiev himself described it as being wind over a grave,” Graybil says. “I think that has a unique sort of darkness to it."

The Franck piece is much lighter, and was written as a wedding gift for Franck’s friend, violinist Eugene Ysaye.

“It's very warm, very sweet, full of tenderness and romanticism, as one might expect for a work of such an occasion,” Graybil says.