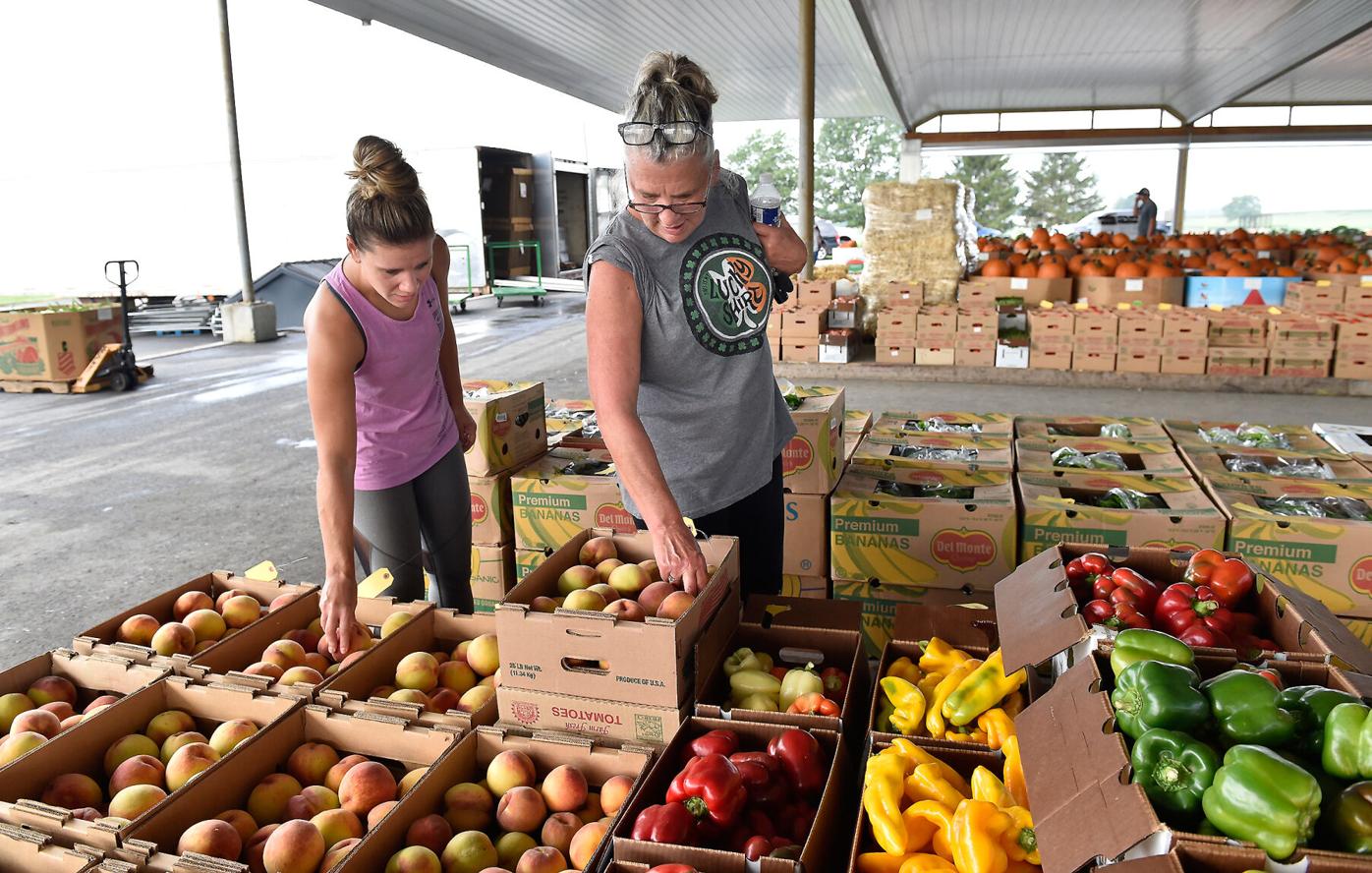 Sara Eby of East Earl and Monica Ross of Mohnton, look at the peaches at the Weaverland Produce Auction on Thursday, September 3, 2020. The ladies go to the auction for vegetables to can or freeze, including tomatoes, peaches and corn. 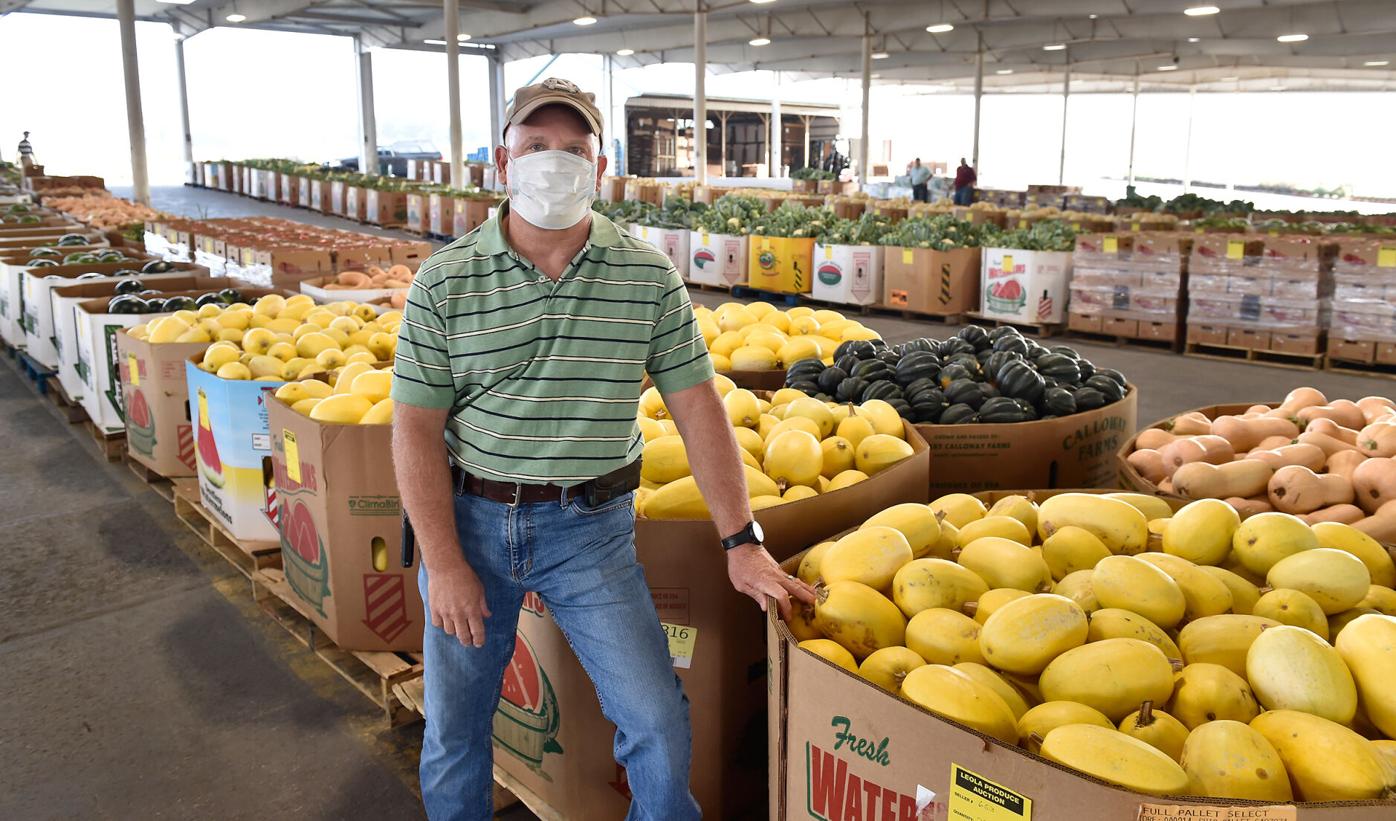 Mike Snyder, manager of the Leola Produce Auction, is pictured with yellow squash on Tuesday, September 8, 2020. 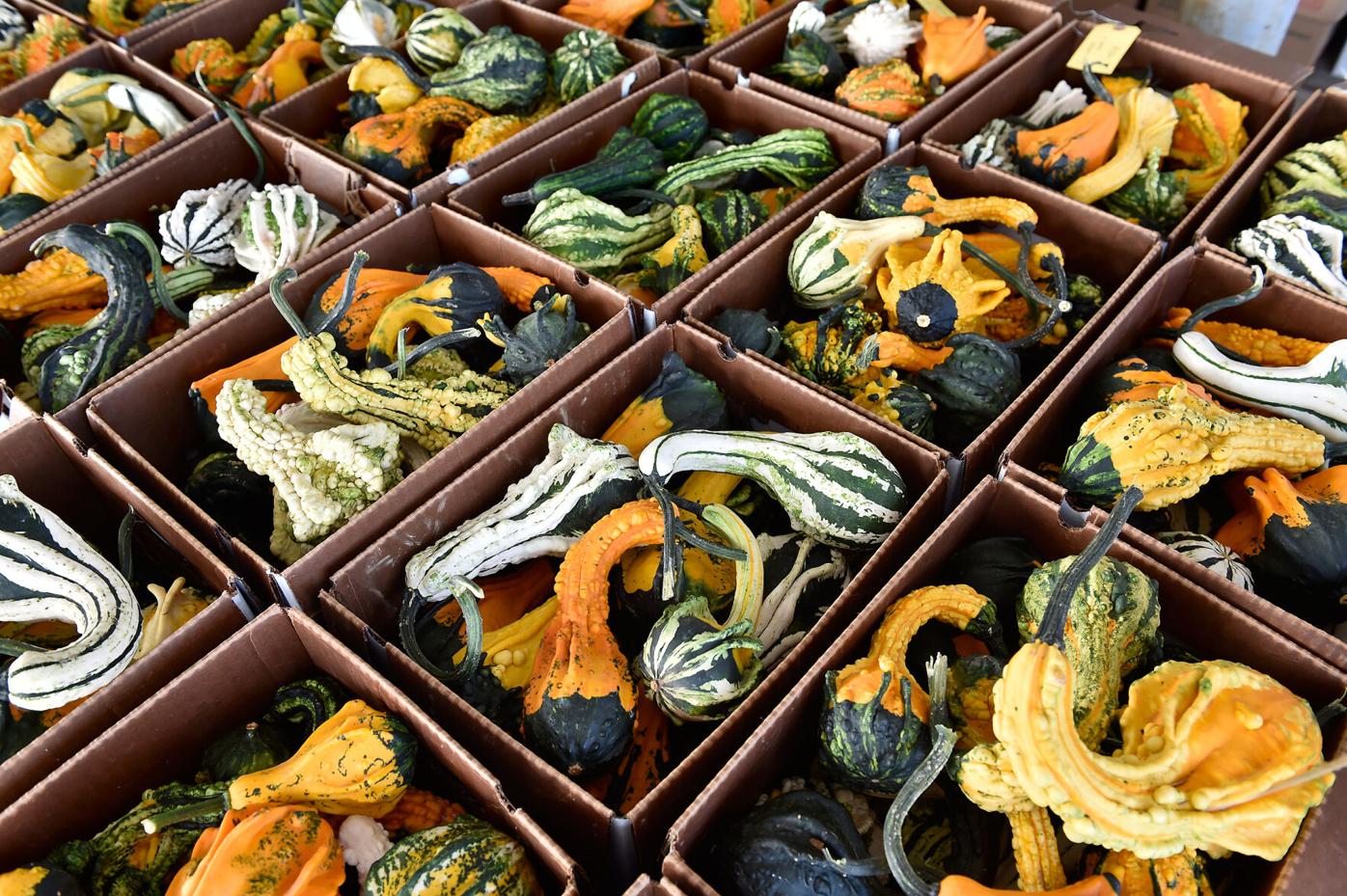 Gourds are pictured at the Weaverland Produce Auction on Thursday, September 3, 2020. 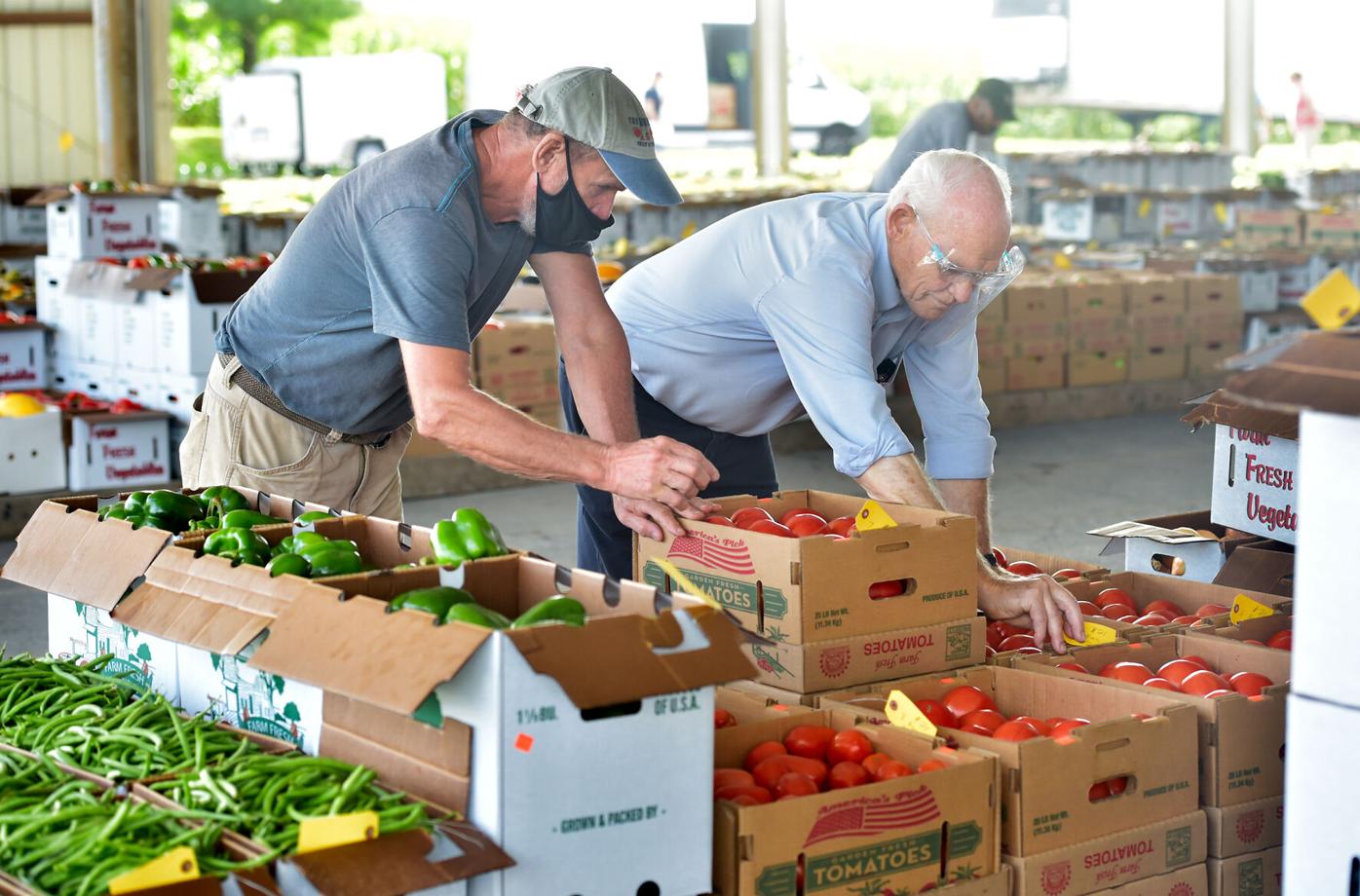 A man who wouldn't share his id and David Weaver, right, inspect tomatoes at the Weaverland Produce Auction on Thursday, September 3, 2020. 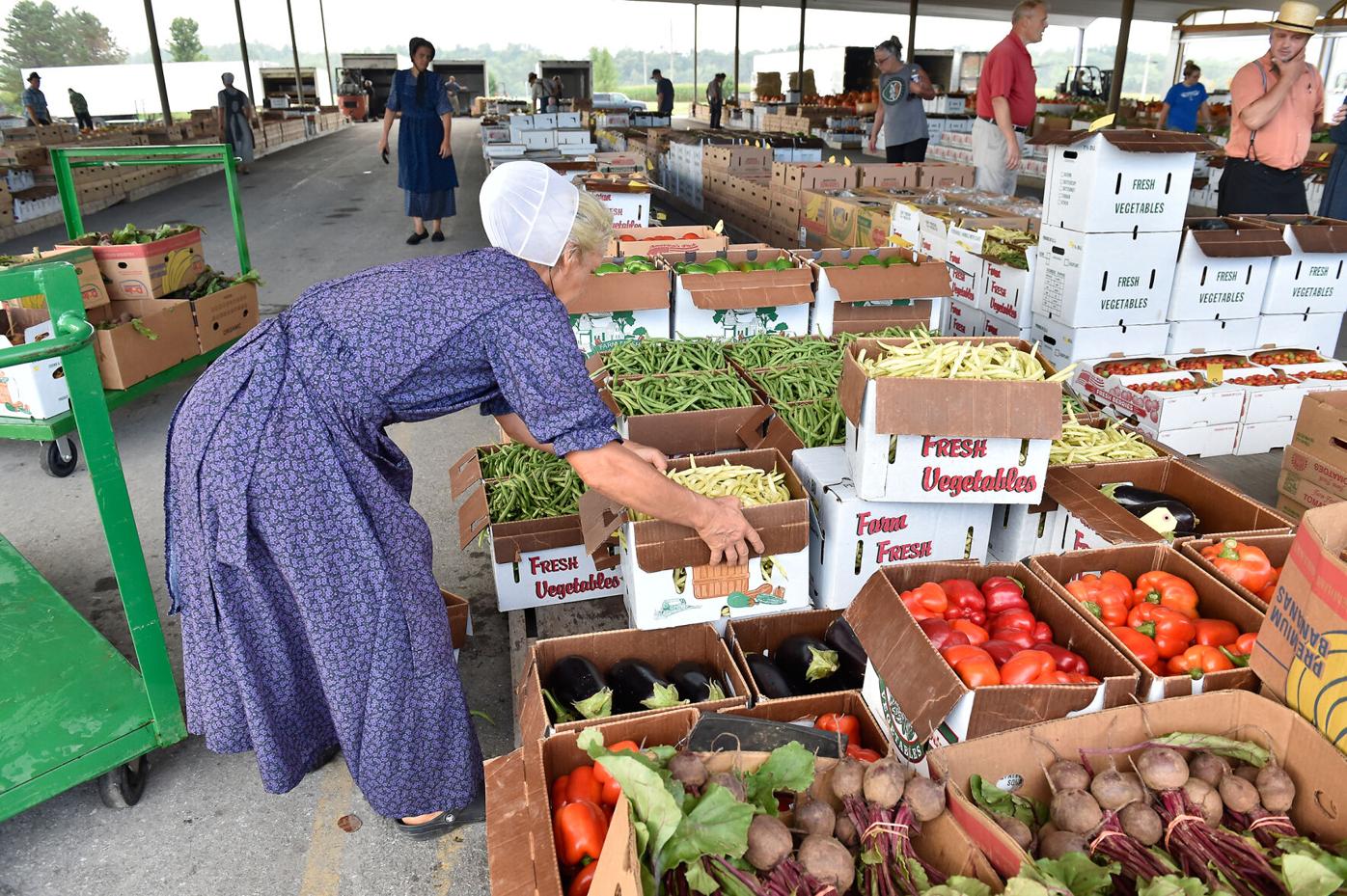 A local lady named Linda moves her produce into place at the Weaverland Produce Auction on Thursday, September 3, 2020. 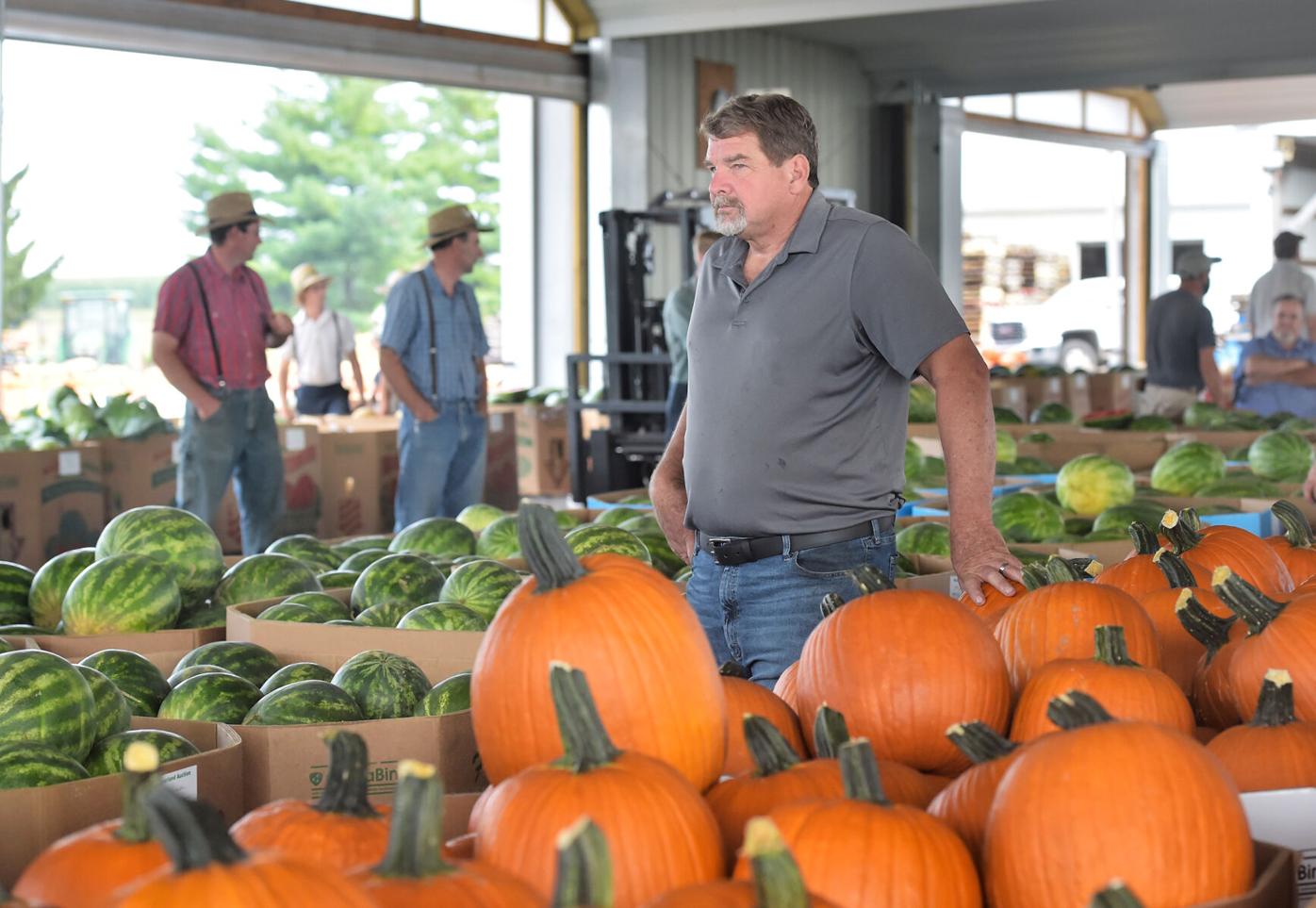 Bruce Eberly, market manager at the Weaverland Produce Auction, is pictured during the auction on Thursday, September 3, 2020. 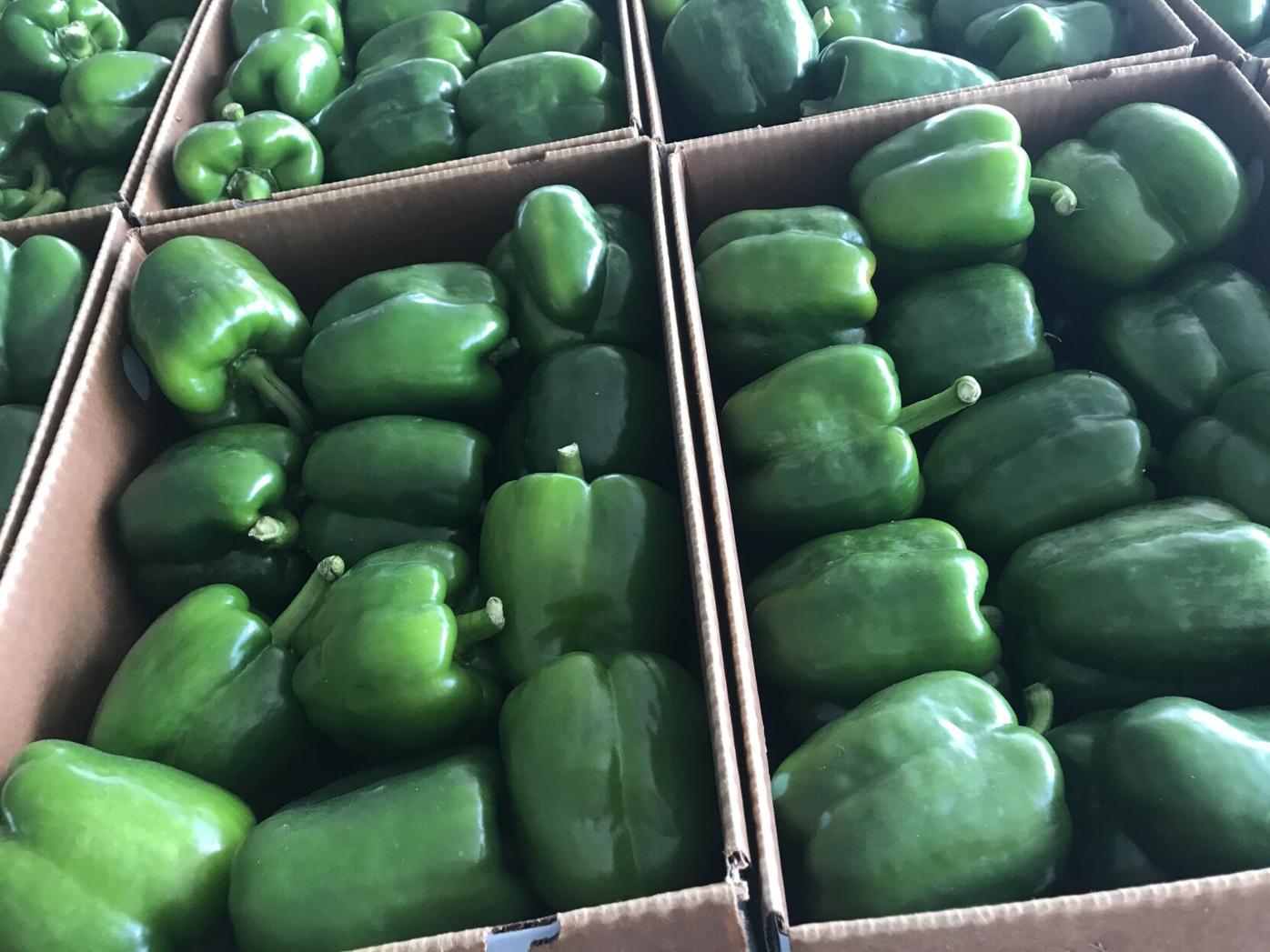 Green bell peppers sit in a bin, waiting to be sold at the Leola Produce Auction on Sept. 4, 2020.

Four days a week, in Leola and New Holland, a whole rainbow of fruit, vegetables and flowers changes hands.

These fresh commodities, which have just been picked from area farm fields and often hauled by tractor and horse-drawn wagon, will find their way into waiting vans and trucks owned by operators of supermarkets, farmer’s markets, restaurants and farm stands around the region.

A day at Weaverland and Leola produce auctions [photo slideshow]

And though the COVID-19 pandemic has caused so much disruption in business, in general, over the past few months, at these auctions, it has resulted in higher prices on the sellers’ produce.

“The one thing that has happened with COVID is that it has increased the demand for fresh produce, and especially local produce,” Jeff Stoltzfus, farm food safety educator for Penn State Extension in Lancaster County, said. “That’s because people aren’t eating out as much, and they’re cooking at home more often, and we’re finding at lot more more business at roadside stands this year.

“Growers tell me there’s a 40 percent increase in some of their sales this year,” said Stoltzfus, who works with farmers and teaches food safety classes that food growers are required to take, by law. “Early in the season it pushed prices to really high levels for our growers.”

Bruce Eberly, manager of Weaverland Produce Auction, said: “Prices, especially in early spring and early summer, everything was crazy high. A lot higher than normal. This is definitely our best year, ever, here at the auction. Even the volume is higher than normal.”

Mike Snyder, who manages the Leola auction, said prices have been higher for the sellers at his auction, as well.

On Mondays, Tuesdays, Thursdays and Fridays, farmers drive  to the auctions with their tagged boxes of produce, and are assigned a consigner (seller) number,  Snyder said.

“The product is mostly brought in within a 30-mile radius of the produce auction,” Snyder said. “It’s picked fresh and brought in that day to sell. We sell all kinds of vegetables and fruit. Anything that can be grown in our area of Pennsylvania.

“Most of the farmers drop off their product and leave because they're  going back to the field to pick, for the next day, and start washing and packaging,” Snyder said.

“It depends on the product being sold,” he added.

Eberly said on a brisk auction day, 600 to 800 of those cardboard bins of produce might be sold — and even as many as 1,000 during pumpkin season in the fall.

“Buyers can be anyone from supermarkets to roadside stands to farmers markets,” Snyder said.

At Weaverland, Eberly said, “we have some big grocery stores, like Shady Maple Farm Market, and then we have some produce retailers, restaurants, roadside stands, all different kinds of people” as buyers.

“We have customers from New York, New Jersey, Delaware and Maryland,” Eberly added. “Probably 60 percent are local, though.”

Eberly said some of the COVID-19 precautions produce auctions have added include asking people to wear masks — especially during the chillier months of the spring, when the roll-up doors and canvas side of the Weaverland building were closed.

“And we limit the number of people coming into the office to pay,” Eberly added.

Stoltzfus said when the pandemic shutdown started, he began to have weekly conference calls with produce auctions around the country to talk about how they could run their auctions safely during a pandemic.

How are corn mazes made? Lancaster's maize masters share how it's done

“So, a lot of them had to make adjustments,” Stoltzfus said. “A lot of them postponed their start for a few weeks and made some other adjustments along the way.

“There was a lot of difference between what was happening in Pennsylvania and New York and Iowa and other states,” Stoltzfus said.

In the early weeks of the pandemic shutdown, for example, the state of Iowa would only allow 10 people in an auction building, eventually increasing it to 25, Stoltzfus recalled.

The managers of many of the auctions he’s  spoken with are trying to limit crowds by asking the farmers to drop off their produce and leave so the auction is mainly populated with buyers, and to operate outdoors as much as possible.

Snyder said the auction season starts in February, with a  “plug” sale — small flower plants that will be repotted and later resold by the buyers.

“Then we start with flowers in March, and then we go from flowers into produce (in summer), and then from produce into pumpkins and then finish up with cold crops, like broccoli, cauliflower, cabbage in November,” Snyder said. “And then we do a Christmas sale,” with wreaths, swag and other fresh greens.

Eberly said auctions start around the same time in the spring at Weaverland, and end right around Thanksgiving.

Pumpkins are a big crop in the fall at both produce auctions.

Both Eberly and Snyder note that their auctions are owned by groups of farmers, and run by elected boards made up of those farmer members.

Both said many of the farmers are from the Plain community.

Weaverland has about 25 owners, and about nine board members, Eberly said.

Each auction contracts with a small group of regular auctioneers who sell the produce.

Stoltzfus said produce auctions have been a game-changer for area farmers.

“It’s been huge in terms of providing a market for produce,” Stoltzfus says. “Produce, because it’s perishable, is very difficult to market. As soon as you pick it, the clock starts ticking as far as the shelf life of that product.

“There’s always the problem on both ends of how do we balance  supply,” he said.“It was always difficult to determine price.

“And so the auctions have kind of solved all that,” Stoltzfus added. “They’ve brought the produce to a central location, and a buyer can come in and buy tomatoes and sweet corn and peppers. The different crops that are there on any given day, and he can get all he needs.

“The farmers can bring it in. It can be sold and the farmer is home by lunchtime and doesn't have to worry about what to do with those other 50 dozen ears of sweet corn,” Stoltzfus said."

“The farmers take pride in what they grow and what they sell," Snyder said. “That's evident, in the buyers coming in wanting the product.”

• Leola Produce Auction, 135 Brethren Church Road, Leola. For hours and to hear the market report of produce prices from a previous day's auction,call (717) 656-9592.

• At this time of year, the auctions run Monday, Tuesday, Thursday and Friday - less frequently late in the season.

• The auctions begin selling flowers in the spring, produce in the summer, pumpkins in the fall and Christmas trees, wreaths and greens before the holidays.

• The auctions are owned by groups of member farmers — many of them Plain — who sell what they grow at the auctions. They’re run by market managers and by boards elected from the membership.

Want to identify a plant in Lancaster County? Here's how you can do it from your phone

When Matt Shockey designed a T-shirt to commemorate this strange school year, he wasn’t sure if anyone would buy it.

Despite the COVID-19 pandemic having shut down arts organizations across the country, jazz trumpeter Wynton Marsalis says he has been busier t…