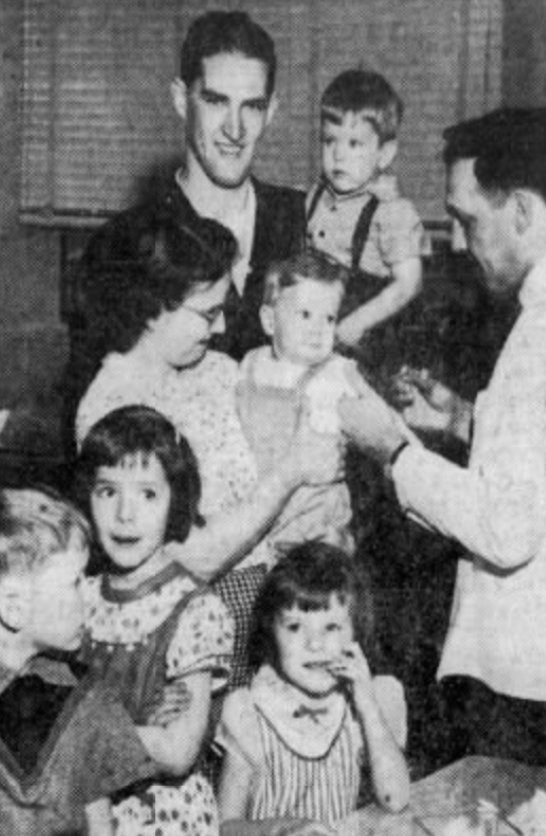 The Kreider family of Willow Street received polio shots as part of an early-access program for employees of Wyeth Laboratories and their families in March 1955. 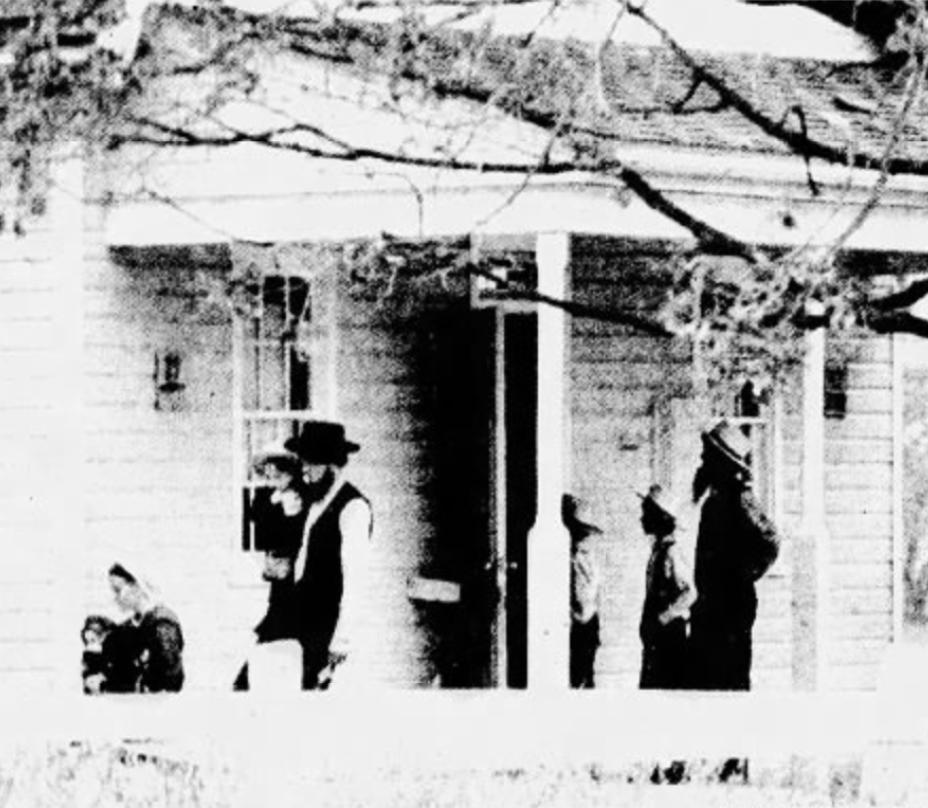 An Amish family visits a one-room schoolhouse in Smoketown to receive polio vaccinations in this photo from May 1979. 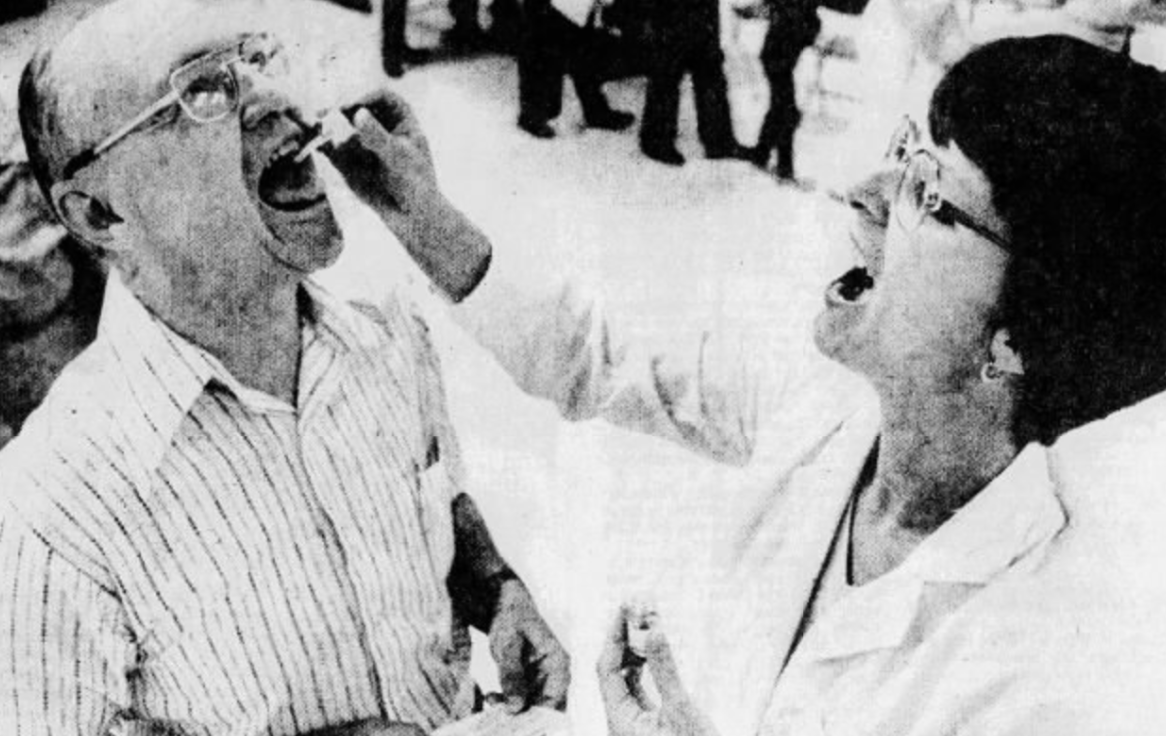 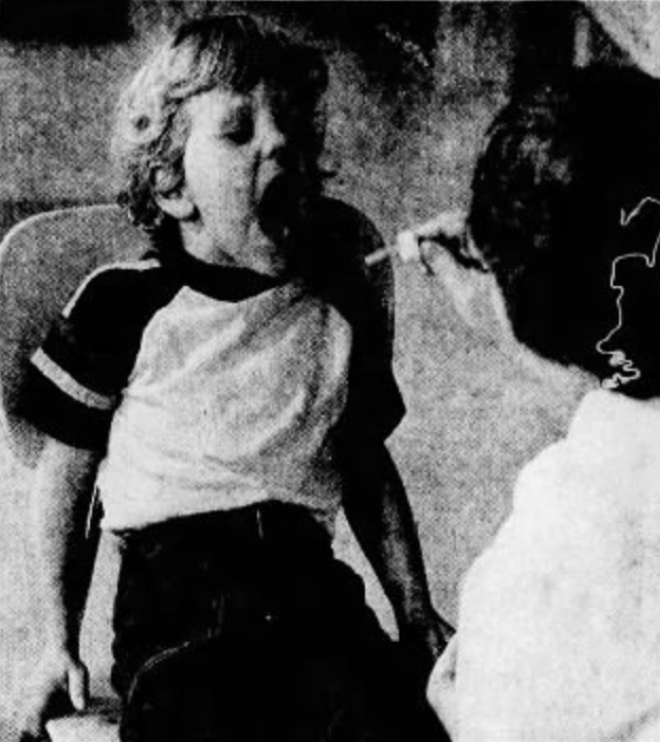 A boy gets his dose of the Sabin oral polio vaccine at Conestoga Valley High School in this photo from June 2, 1979.

With multiple vaccines for the COVID-19 novel coronavirus on the horizon, Americans will likely see a large-scale vaccination effort sometime in the next few months.

Older Lancaster County residents may remember other large-scale vaccination efforts, such as those aimed at eradicating polio. The last of those efforts came much later than you may think - while polio was largely eliminated in the United States over the course of the 1950s and '60s, an outbreak in Lancaster County in 1979 led to more than 150,000 county residents being inoculated.

Here's a look back at that outbreak, through the lens of the LNP | LancasterOnline archives.

Polio - short for poliomyelitis - is an infectious disease caused by the poliovirus. Polio outbreaks were common around the world, including in Lancaster County, throughout the first half of the 20th Century.

Indeed, in the 1940s, the annual spike in polio cases - which usually happened during the summer months - was often accompanied by helpful advice in the newspapers about how to stay safe. These recommendations included avoiding crowds, washing hands, not swimming in potentially contaminated water and being vigilant about pest control.

While about half of polio sufferers recovered easily with no lasting effects, a small percentage ended up paralyzed or dead, which is why a vaccine was fervently anticipated.

By February of 1955, front-page stories were speculating about when the famed vaccine, recently developed by Jonas Salk, might arrive in Lancaster. The previous year, one million children around the country were inoculated with the vaccine as part of a trial program, and wide distribution was expected sometime in the spring of 1955.

At the end of March, the first people in Lancaster County were inoculated - families of Wyeth Pharmaceuticals employees. At the same time, forms were distributed to parents allowing them to request vaccinations for their children.

And most parents did so - 95 percent of first- and second-graders in Lancaster would receive the shots.

Similar efforts took place around the country, and over the course of the next few years, thanks in part to nationwide campaigns by the March of Dimes, the number of annual polio cases in the U.S. dropped from 58,000 to 5,600. Similar efforts in the early 1960s involving the oral Sabin vaccine further cut the numbers to between 100 and 200 cases a year, according to the Journal of the American Medical Association.

In 1979, it had been years since Pennsylvania had seen even a single case of polio. When a 22-year-old Amish woman in Franklin County was stricken with the disease in January of that year, Amish people throughout the state began to worry.

A small but persistent outbreak of polio had been quietly spreading from the Midwest through Amish communities in previous months, and its arrival in Pennsylvania caused Amish leaders to consider vaccination.

Newspaper reports at the time indicated that the Amish reluctance to vaccinate was more a matter of custom than religion, and some Amish children were vaccinated regularly.

As January wore on, Lancaster County Amish families kept a close eye on Franklin County, as some Amish residents there agreed to be vaccinated, and 16 more residents of the tiny Spring Run community were found to be asymptomatic carriers of the polio virus.

By Feb. 1, more asymptomatic cases were found among the Amish in South-central Pennsylvania and northern Maryland, and vaccinations were under way in Franklin County - not only among the Amish, but among other members of the community who may not have been vaccinated as children.

Polio historically spreads most quickly during the warmer months, and by early May, two Amish people in Mifflin County were suffering serious symptoms.

On May 15, the New Era announced that Lancaster County's Amish leaders had given their approval to voluntary vaccinations of Amish families. Amish bishops and school leaders met informally with state health officials, and agreed to neither promote nor discourage vaccination, leaving the decision up to each family.

One Amish man who participated in the meeting and declined to give his name told the New Era there was no disagreement at the meeting.

"I think our people realize the need for it," he said, "not only for ourselves but for our English friends and other people."

The polio outbreak, while still small, continued to spread throughout May 1979. On May 17, the first case in a non-Amish person was reported in Mifflin County.

And on May 25, massive headlines heralded the disease's arrival in Lancaster County.

A 34-year-old Old Order Mennonite man was the first person to contract polio in Lancaster County since 1963, and a 14-month-old Amish boy was also suspected to have the disease, though his test results were still pending. (All three of that boy's siblings had tested positive, and were asymptomatic carriers of polio.)

The state urged all residents of Lancaster County to be vaccinated, and plans were under way to set up a series of free clinics the next weekend.

State health officials said the rapid immunization program was a massive undertaking, but they were prepared for up to 200,000 of the county's 340,000 residents to show up for vaccination.

Over the next few days, the local newspapers reported on the whirlwind effort to get tens of thousands of county resident vaccinated in three days.

Vaccination sites were announced - 21 in all, including schools all over the county as well as Park City Center.

Health officials tried to anticipate questions, and made it clear who did and did not need to get a vaccine. (In short, anyone of any age who had never been immunized against polio should get the vaccine, officials said.)

Meanwhile, another Lancaster County Amish child was admitted to the hospital with fever and paralysis, awaiting confirmation of a polio infection.

On Saturday, June 2, the vaccinations began. And despite a rainy weekend, people turned out in massive numbers to take the oral vaccine, a pink liquid that was dripped onto people's tongues in two-drop doses.

More than 30,000 people showed up on the first day of the program, with the Sunday News reporting that the Park City site was the busiest. Health officials said they "would've been thrilled with 20,000," so reality certainly exceeded expectations.

"It's just a tremendous success," state health department spokesman Bruce Reimer said. He added that the three-day mass vaccination program inoculated about 43 percent of eligible recipients - and that number didn't take into account the many more who opted to get the vaccine from their family doctors instead of waiting in lines with hundreds of other people.

Still, the process ran smoothly, and wait times stayed well under an hour.

Jack Klock, the state-level coordinator of the program, had this to say as the immunization drive wrapped up:

"This is the best planned and best executed health program I've ever been involved in. Lancaster County can be proud."

As the representative of the state health department and the CDC packed up to head home, a low-key presence remained, working over the next two weeks to continue vaccinating any members of the Amish community who were willing.

In all, this quiet program that ran in undisclosed locations, separate from the hustle and bustle of the main vaccination sites, inoculated more than 7,000 of Lancaster County's 12,000 Amish people. Even more Amish families opted to receive the vaccine from their family doctors, often in their homes.

Not counting the numerous asymptomatic or mild cases, only three Lancaster County residents were struck by the disease in 1979 before the vaccination effort got it under control.

The 1979 Pennsylvania outbreak was the last appearance of polio anywhere in the United States.