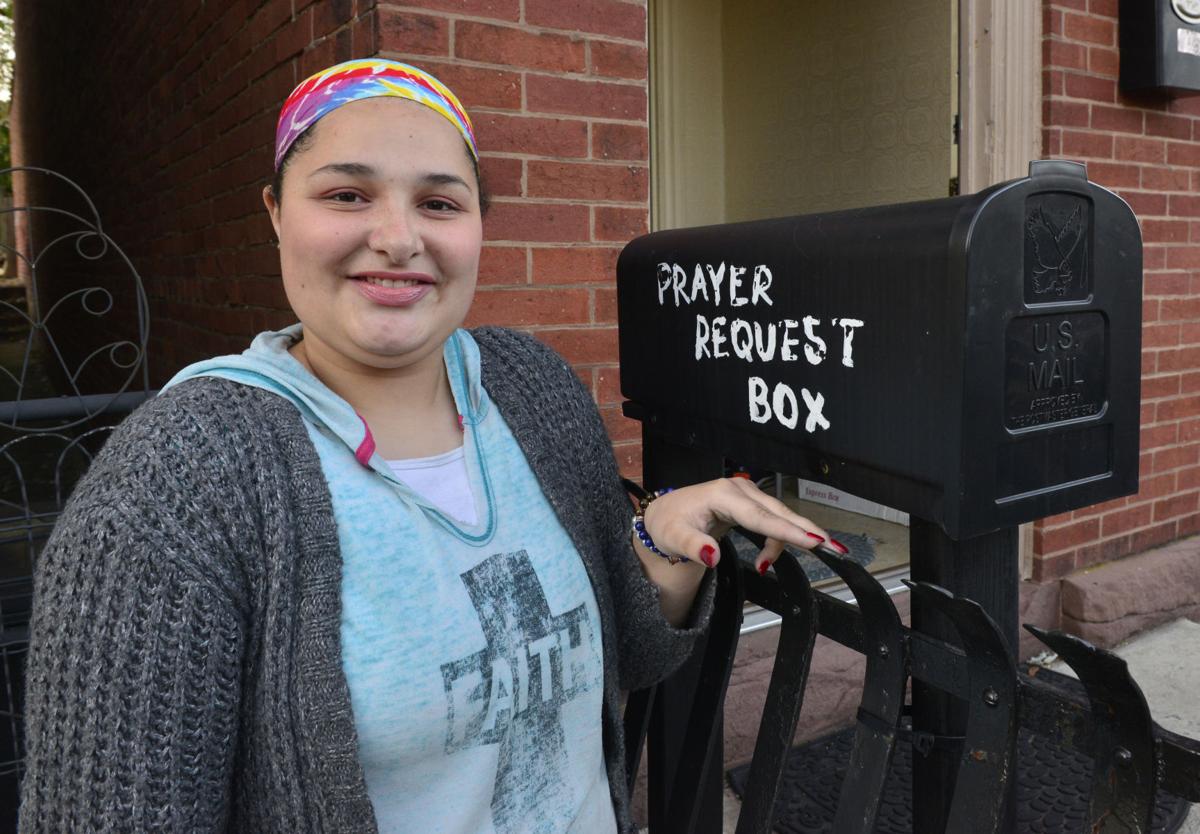 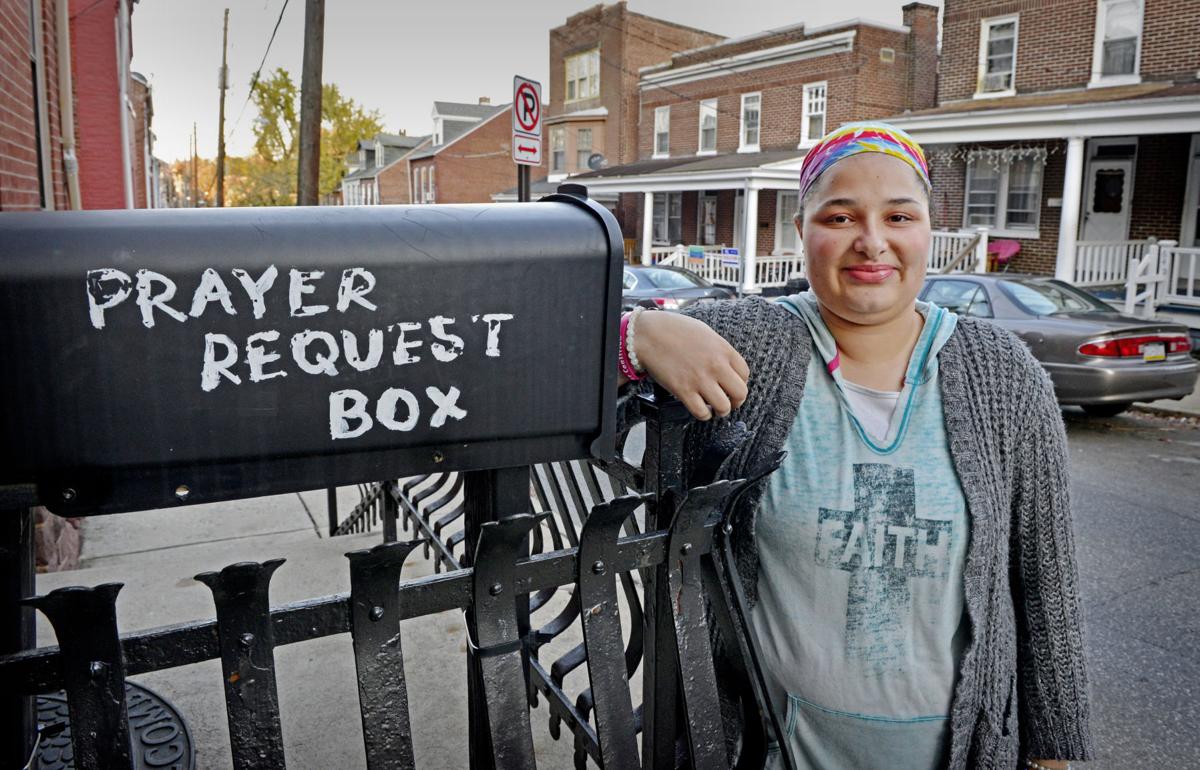 Brittany Fisher stands next to the prayer request box in front of her family's West Vine Street home in Lancaster city on Nov. 4, 2019. 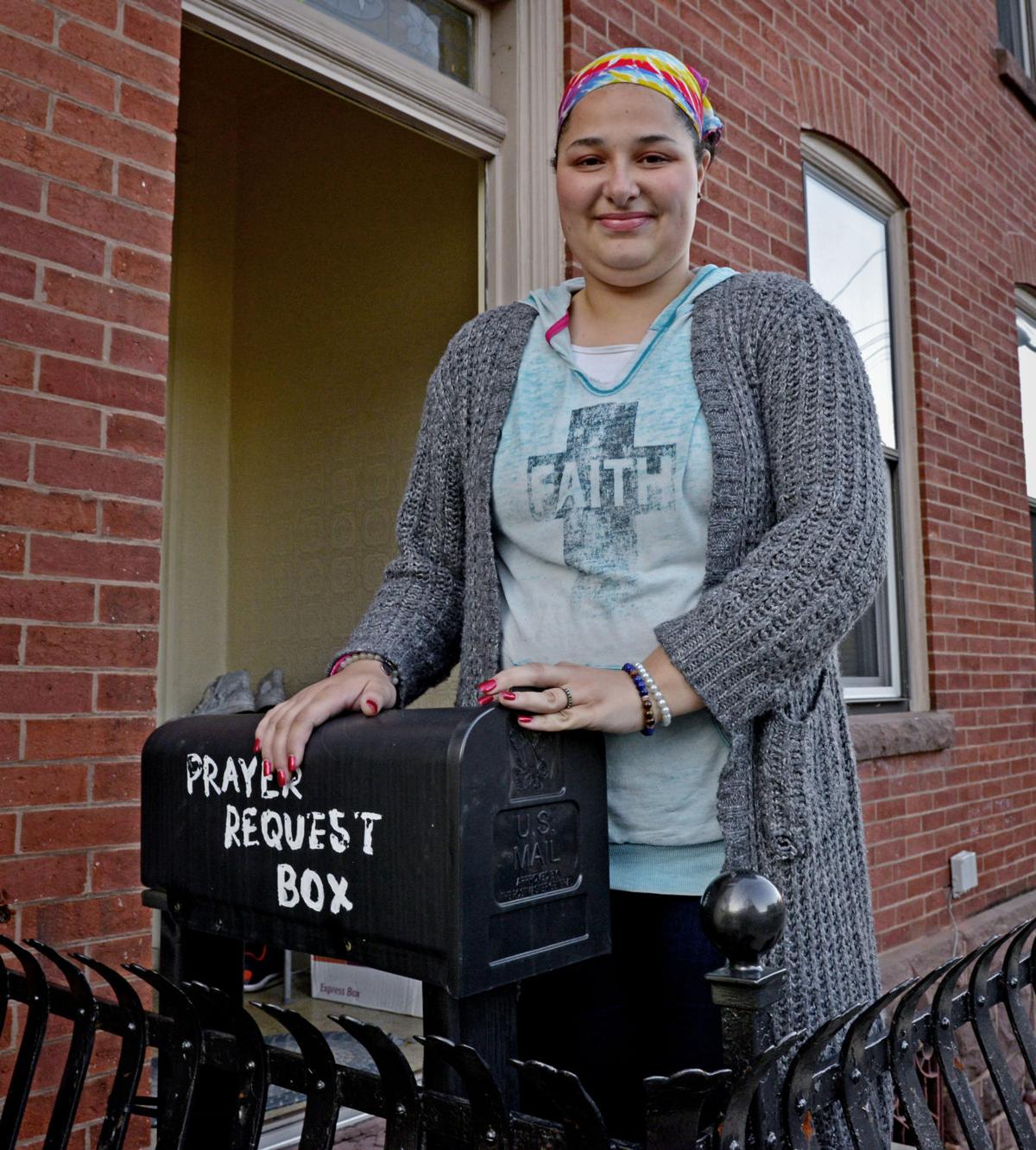 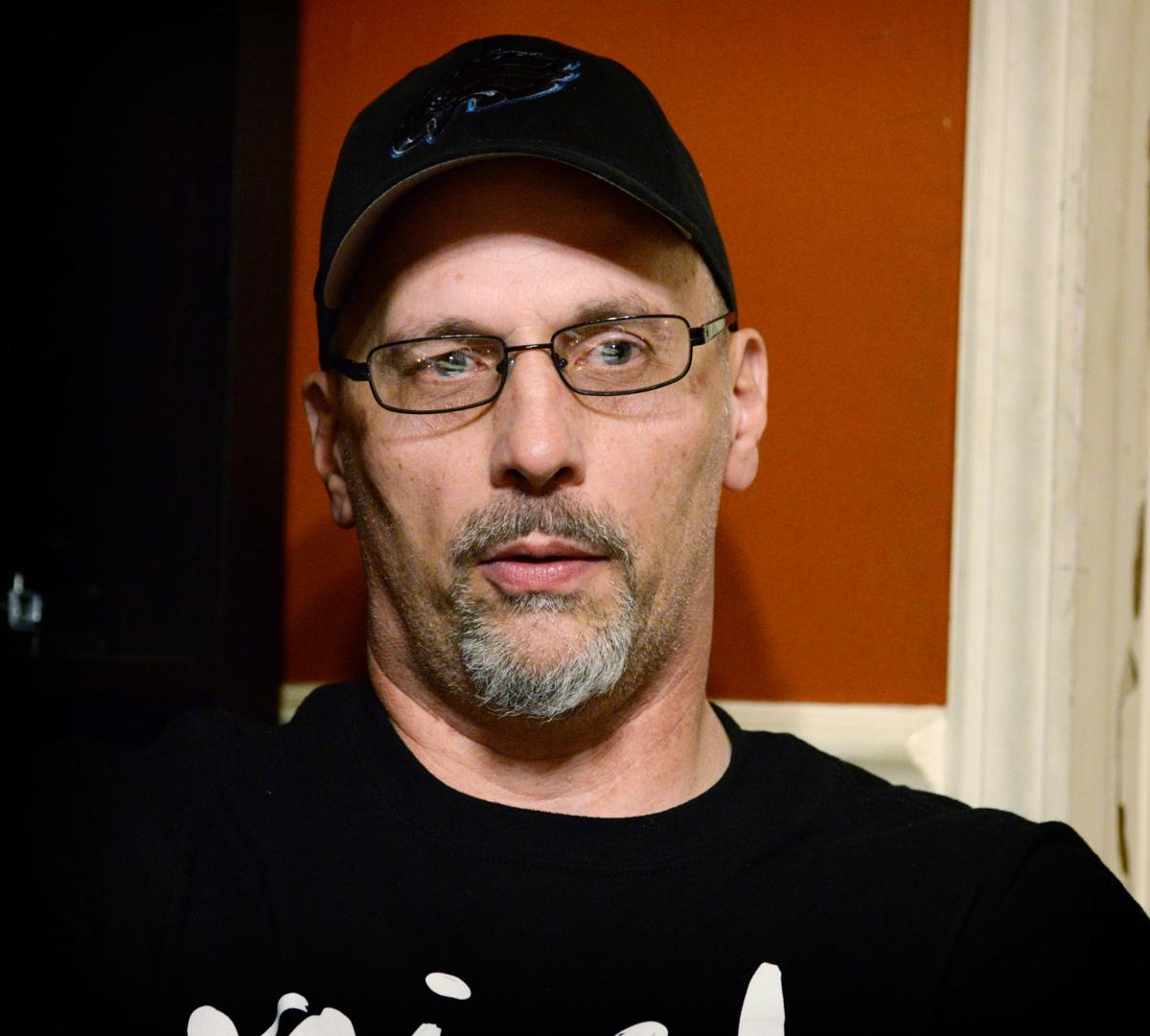 Bert Fisher talks about the prayer request box his daughter Brittany has at their home on West Vine Street in Lancaster city Monday, Nov. 4, 2019. 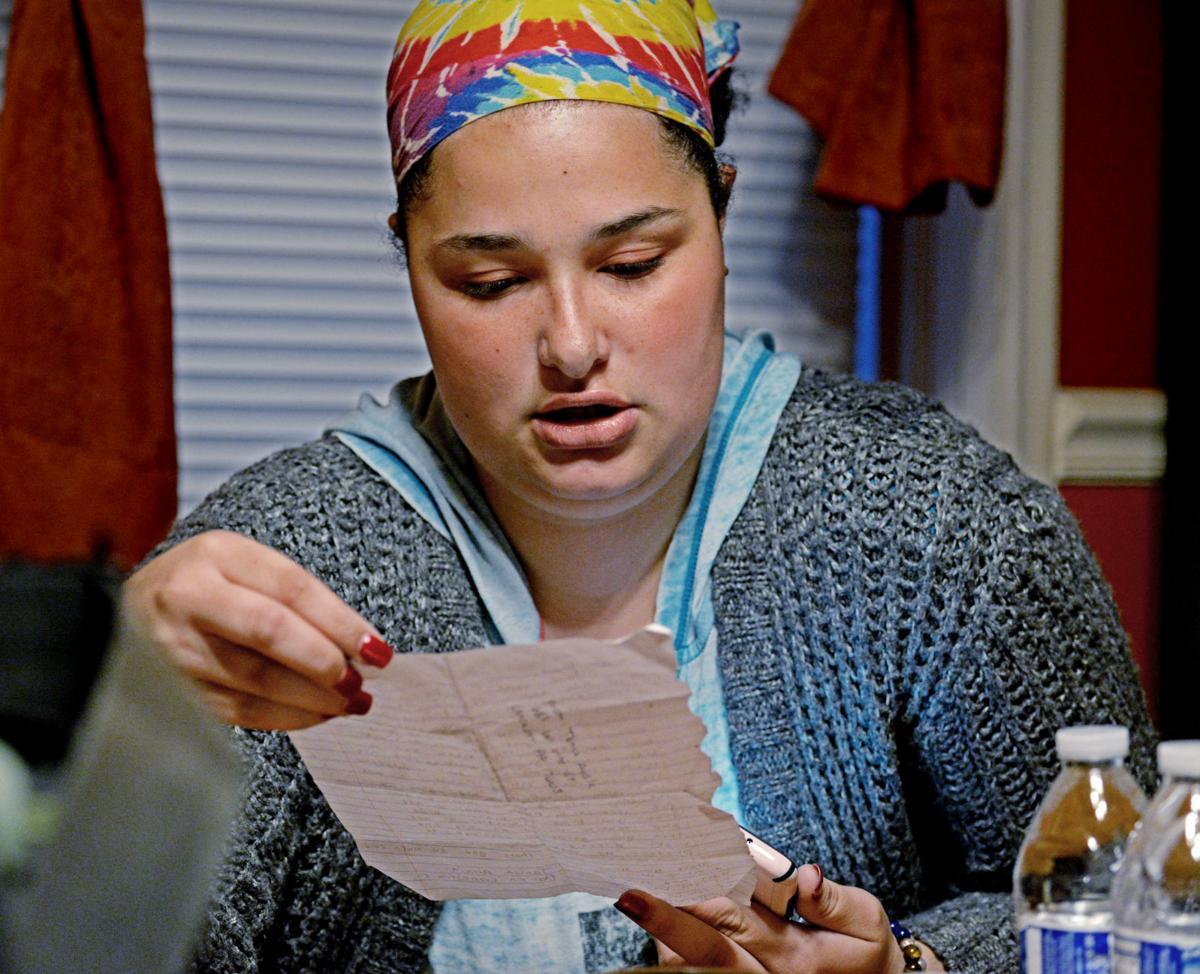 Bert Fisher talks about the prayer request box his daughter Brittany has at their home on West Vine Street in Lancaster city Monday, Nov. 4, 2019.

There is a place in Lancaster city where folks can leave their worries on another person’s doorstep.

About two years ago, 18-year-old Brittany Fisher hatched a plan to both enhance her faith and help people.

She and her father, Bert (short for Robert), attached a mailbox to a railing  in front of the family’s home.

The black mailbox with white lettering reads, “Prayer Request Box.”  It contains note cards, pencils, Bible verses and brochures for Journey Church in Ronks, where they are members. It invites people to jot down their prayer concerns and allow others to pray for them.

“I really care about people and their life and what they do,” Brittany Fisher said of her rationale behind the mailbox. “I just thought, ‘Why not do something for the city?’ ”

She keeps the prayer requests in a small box in the house and offers prayers when time permits.

Of the dozen or so requests she has received thus far, most focus on health issues, including one that was dated March 20 of this year:

“Good morning,” it began. “I live with my father who is 75 yrs. old, retired and he has medical problems. Me, I’m 52 yrs. old and live with my father taking care of him and our house on the hill. I’m going down disability road with slipd (sic) disc in my back and a lot of major arthritis problems... I really need many prayers ...”

Fisher said he checks the prayer box regularly. Although they haven’t received any recent requests, he said there are times when several will arrive within days of each other.

“Sometimes, we go through a spurt where we get a few of them,” he said. “People are broken and we believe prayer changes things.”

The prayer box is an extension of what Fisher feels is a calling.

The family lived in a farmhouse in Brickerville until six years ago. At that time, he and his wife Lisa believed God was calling them to move to the city.

“I think He just wanted us to be uncomfortable — to get out of our comfort zone,” he said. “And that’s a good thing. That’s when you grow.”

Fisher also believes God played a role in the purchase of the Vine Street house. He said they toured the house while the previous owners were there and his grandson hit it off with them.

After they left, their real estate agent called. He said the sellers had taken the house off the market because they felt the Fishers were the proper family to live there. In addition to Brittany, they have a 17-year-old daughter, Kayla, a 16-year-old son, Nathanal, and Bert Fisher’s 30-year-old stepson Gary.

“We felt God was behind that, too,” he said.

Fisher and his wife are care team leaders at Journey Church (formerly Living Waters Theatre in Ronks), providing meals for people who are sick or who have had a baby or need help moving.

“We call it the ‘Hands and Feet of Jesus,’ ” Fisher said.

Their work is not confined to only aiding church members or praying for people. This past summer, they took in a homeless youth who, Fisher said, “had made a lot of bad choices.”

The youth stayed with them for  most of the summer  before moving on.

One neighborhood couple used the prayer box to thank God for their blessings.

“Dear God,”  an excerpt of the prayer read. “Thank you for being so good to my family and I. Thank you for everything you blessed us with. I just want to ask that you bless our house, take away any evil spirits, never to let evil  enter our door.” — Tanisa and Aaron

Fisher and his wife grew up in Eastern Lancaster County. Both graduated from Conestoga Valley High School.

“We just feel like this is where we’re supposed to be,” he said.

Others apparently feel that way as  well. One of the prayer cards Brittany read came from a neighbor.

“I miss(ed) this pray box so I had to come this way praying for you.”

When members of Otterbein United Methodist Church went to the U.S./Mexican border last month, they didn’t have an agenda.

The tagline on the Project: Music Heals Us welcome page reads: “Bringing the healing power of music to those who need it the most.”