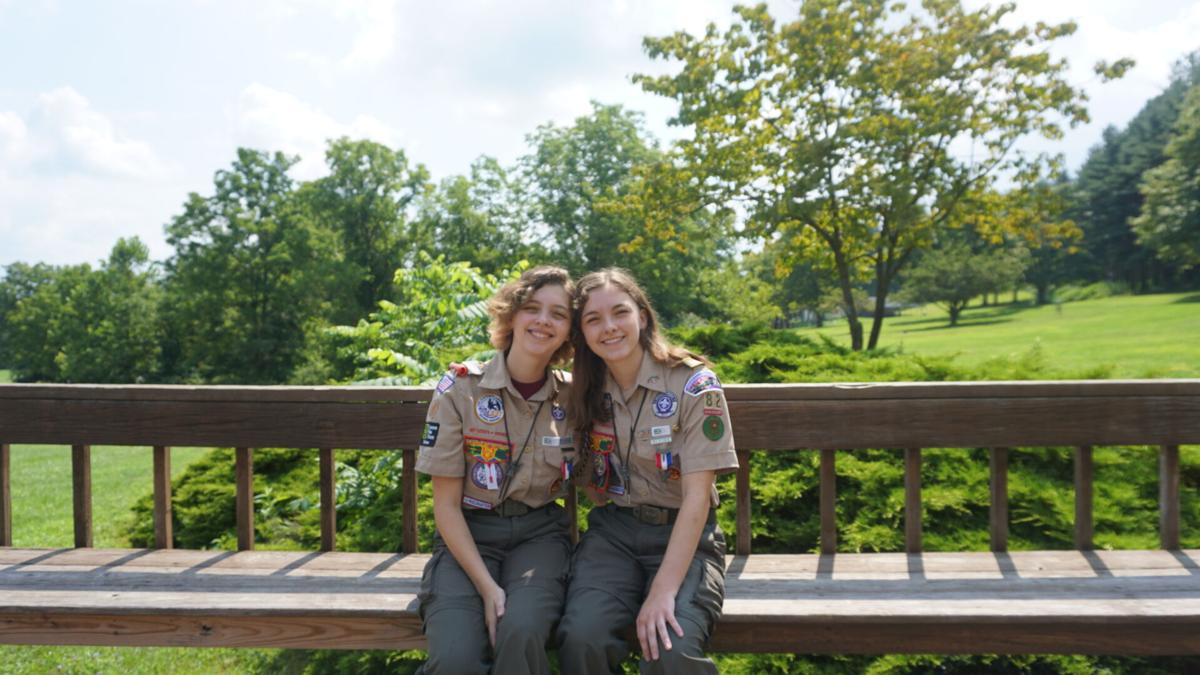 Lyndsey and Lauren Nedrow are Eagle Scouts and are part of the first group of young women to reach scouting’s highest level. 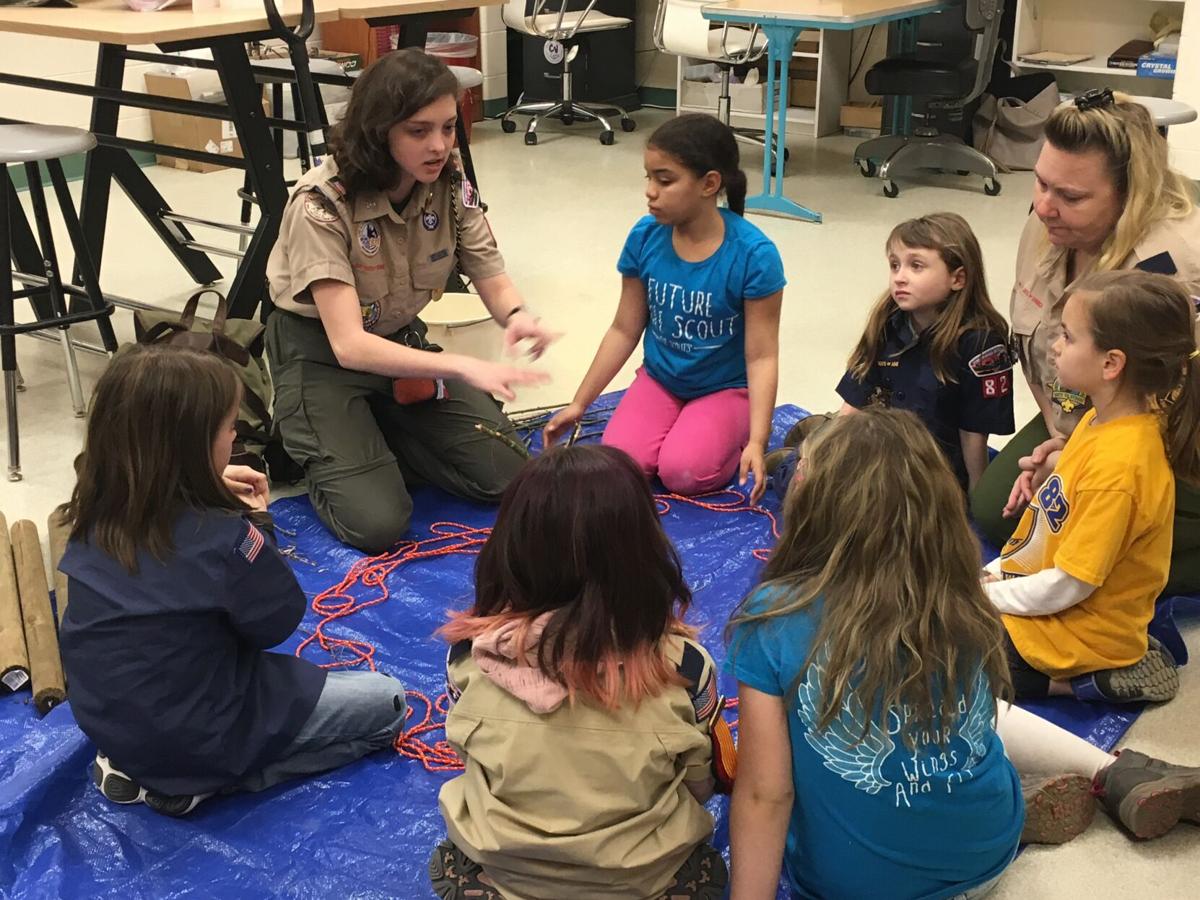 Lyndsey Nedrow was one of the founding members of BSA Troop 82, Brownstown, Pennsylvania Dutch Council’s first female troop. She and the other leaders did things like teach Pack 82’s Panther Den about campfire safety. 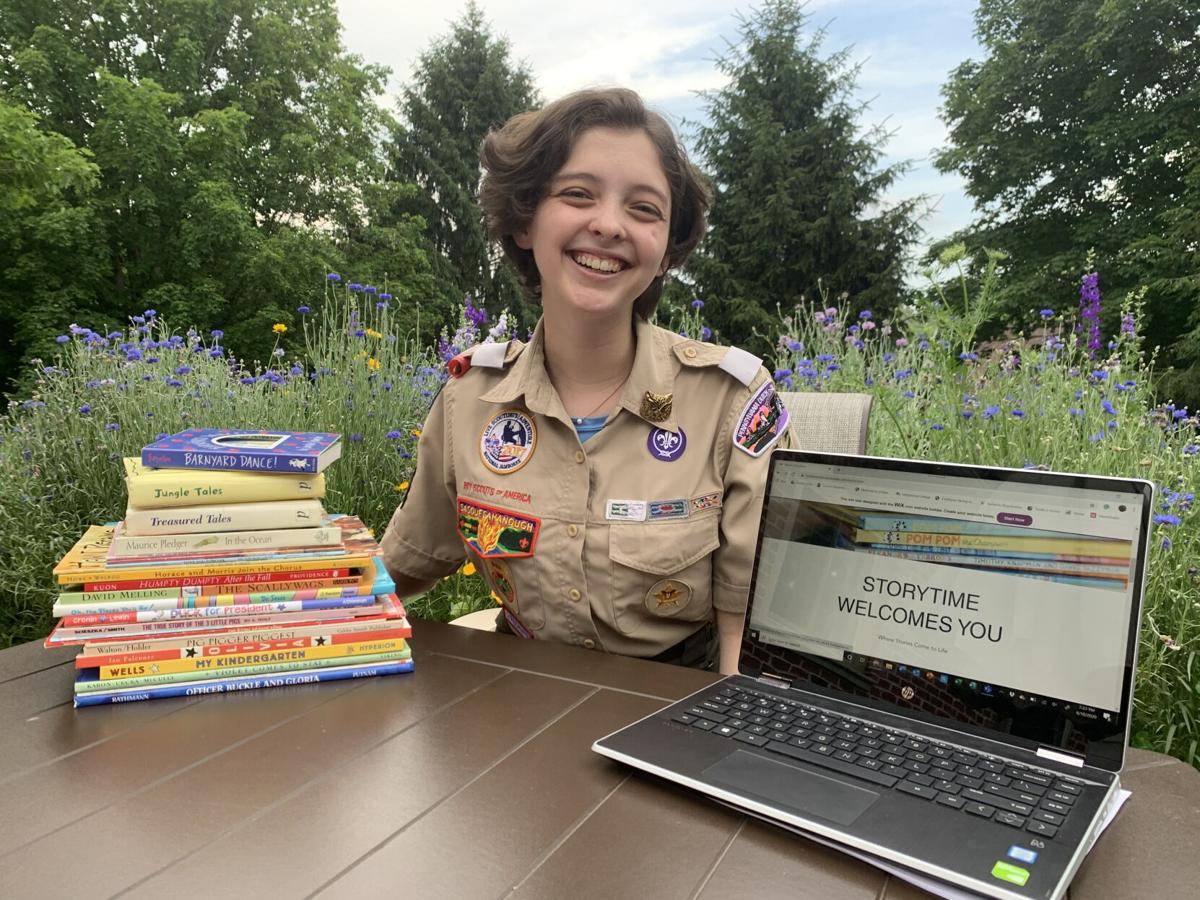 To earn her Eagle Scout rank, Lyndsey Nedrow created a website for children to books read aloud by scouts in several countries. 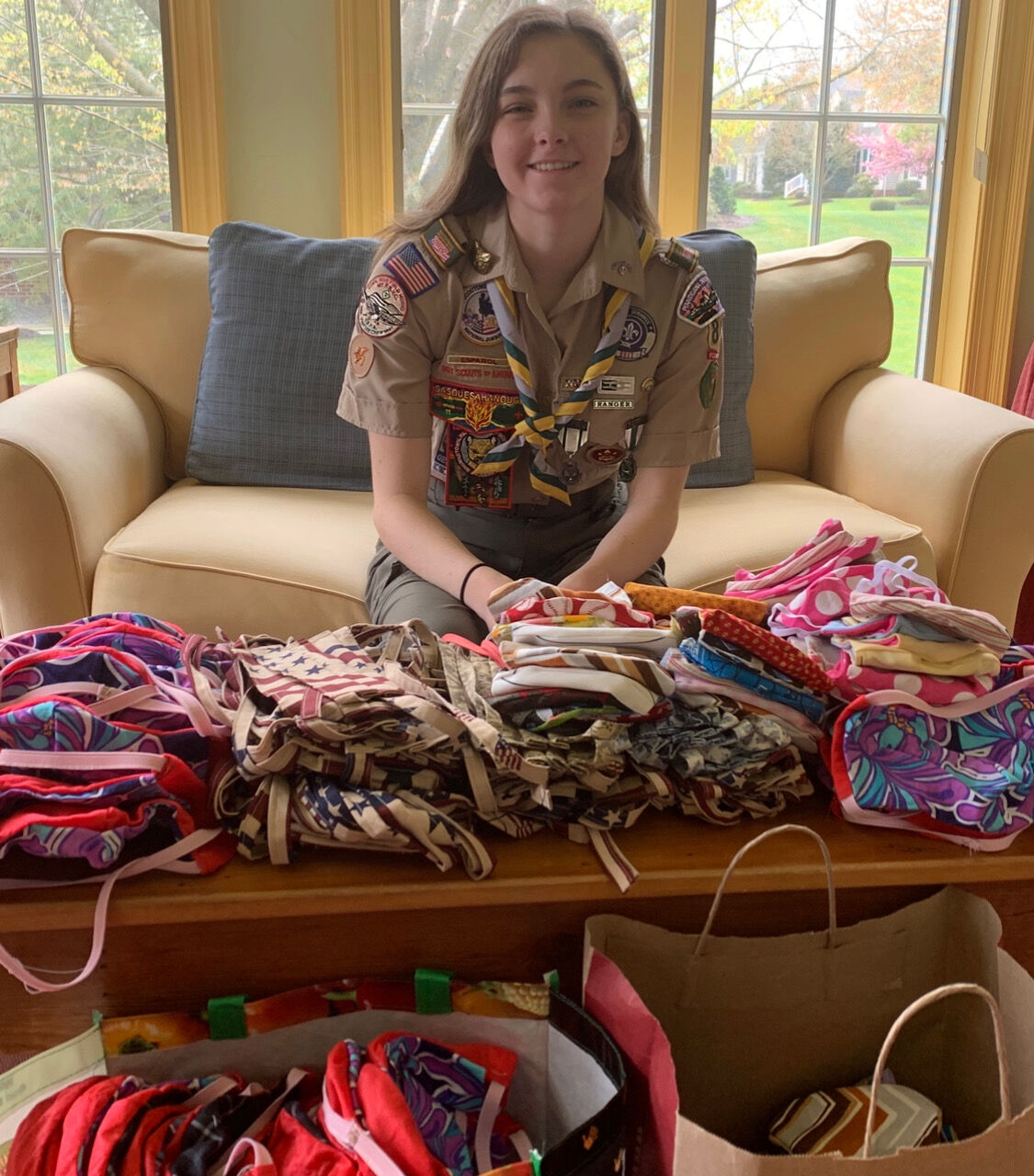 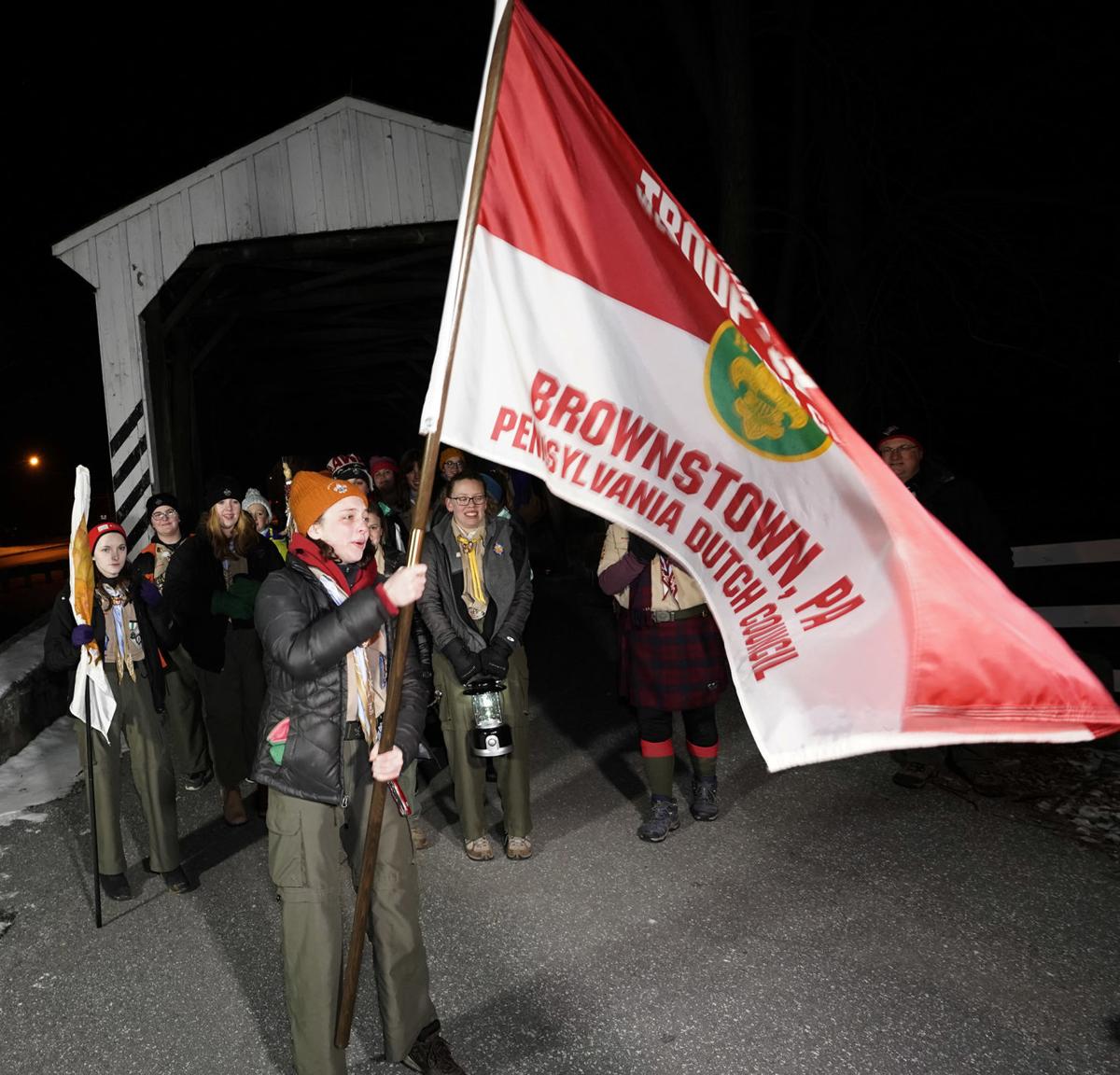 Lyndsey Nedrow holds the troop flag for the all-girl Troop 82 of Brownstown during a bridging ceremony Thursday night, Jan. 31, 2019.

Years before girls were allowed in Boy Scouts, Lauren and Lyndsey Nedrow spent plenty of hours at Cub Scout meetings.

Their presence was more practical than pioneering. Their brother was in the pack. Their father was the cubmaster. As a parent of triplets plus one, dad often brought the girls along to Cub Scouts.

Years later, when Boy Scouts welcomed girls, Lyndsey and Lauren signed up, even though they had just six weeks before they’d age out of the program.

Thursday, Lauren and Lyndsey became Eagle Scouts. They’re part of the first group of young women to reach scouting’s highest level, and achievement only reached by 5 percent of scouts. These sisters have the rank and the badges plus the knowledge and the friendships. For them, most important is the path they’ve created for girls who want a place in scouting.

“It’s so beautiful to be sitting in the troop and look around and see those little girls. You can just see yourself in them,” Lyndsey says, holding back tears. “I remember being at the back of the Cub Scout meeting. And these little girls are at the front of the meeting.

The sisters conducted their Eagle Scout review remotely Thursday from college, where they are sophomores. After graduating from Conestoga Valley in 2019, Lauren is studying neuroscience at University of Pittsburgh with her eye on a career in the medical field. Lyndsey’s studying psychology at Gettysburg College with an interest in education. Their parents, Mike and Kelly, live in East Lampeter Township.

Lyndsey and Lauren’s path to the virtual reviews started when girls were allowed to join Scouts BSA in February 2019. Their time in scouting goes back further.

Older brother Ryan and their triplet brother Austin were both scouts. Lauren and Lyndsey heard about their camping trips. The sisters joined Girl Scouts but wanted to more time outdoors and more adventure. So they joined a co-ed Boy Scouts Venturing crew.

In that group, they did things like organize and lead a 100-mile trip for 10 canoes through the Allagash Wilderness Waterway in Maine. That was a trip where Lauren went to rescue a flipped canoe in the rapids and flipped her own boat. She and her boatmate fixed a broken thwart by creating a splint with a log to finish the rest of the trip.

At summer camp, Lyndsey taught dozens of children lifesaving skills, plus how to use a knife and build fires.

In Venturing, Lauren and Lyndsey each earned the Summit award, the program’s highest rank, plus the Ranger award for outdoor skills. Lauren also earned the Quest award for fitness.

By the time Boy Scouts of America opened scouting to girls in 2019, the sisters were only weeks away from aging out of the program. They still signed up to be mentors for younger girls.

They were among the founding members of Troop 82, Brownstown, the Pennsylvania Dutch Council’s first female troop.

While the sisters were older than the girls they mentored, they also were new scouts, learning at the same time, says Erin Blank, Troop 82’s scoutmaster.

Outside their pioneering troop, they heard from people not happy with girls in scouting, including troop leaders and parents.

“Because of the culture that he created, there were a lot of young women who came through the BSA through Crew 1861,” she says.

The sisters also had moments when scouts have taken extra steps to make them feel included.

At their first big Scout-O-Rama, they both felt pressure being among only a few young women in a camp of more than 200 scouts.

“Being the first females, we didn’t want any mistakes that anyone could think, ‘Oh that’s the reason why girls shouldn’t be here,’” Lyndsey says. “Anything that could possibly justify their thinking that we didn’t deserve to be there. It was exhausting that weekend, thinking about every single action and how it was perceived.”

Yet at the closing campfire, they were asked to lead the last song. Afterwards, scouts who were strangers walked up to give them the scout handshake and welcome them.

The Eagle Scout rank takes most scouts in the local council about six years to complete, says Matt Adams, scout executive. Working faster is possible, but the steps still take more than a year to complete, so Lauren and Lyndsey focused on mentoring their troop. When Boy Scouts of America offered an extension for new female scouts, they jumped at the opportunity.

For the service project, one of the requirements is to give direction to at least two helpers. That’s great to build leadership skills but challenging during the pandemic quarantine.

Lyndsey created a website, bit.ly/LNStorytime, for children in kindergarten through third grade to listen to books read aloud. She recruited scouts from Canada to Brazil to read stories and authors too.

Now that they’ve reached scouting’s top rank along with their brothers and father, Lauren and Lyndsey still want to stay involved. Lauren’s pursuing her EMT certification and would like to be a health officer at a summer camp. Lyndsey talks about someday being a scoutmaster.

Their advice for other female scouts?

“Even if things are difficult, that’s part of the journey,” Lauren says. “Anyone that’s interested in taking on the challenge, it’s definitely rewarding.”

“Keep fighting and have fun,” adds Lyndsey. “I think, truly, you can do anything that you put your mind to.”

Part of Camp Mack could become state game lands, public use would continue on 392 acres