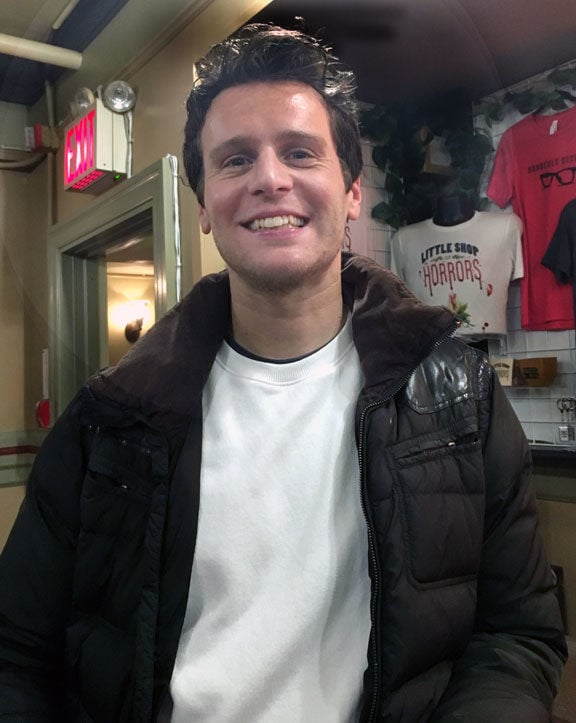 In this December 2019 file photo, Lancaster County native Jonathan Groff is interviewed after a performance in the off-Broadway "Little Shop of Horrors" in New York.

Ronks native Jonathan Groff, who is nominated for a Grammy Award as part of the "Little Shop of Horrors" theater cast album, is shown in "Into the Unknown: Making 'Frozen 2'" documentary series on Disney+.

Lancaster County native Jonathan Groff was nominated for a Grammy Award on Tuesday, Nov. 24, for best musical theater album, along with other cast members and producers of the off-Broadway revival of the musical "Little Shop of Horrors."

Groff starred as Seymour Krelborn in the New York revival, which opened in October 2019. He is nominated as a principal vocalist on the cast album, along with Tammy Blanchard, who played Seymour's love interest, Audrey, and Tom Alan Robbins, who portrayed Seymour's flower-shop boss and adoptive father, Mushnik.

Also nominated for the Grammy for their work on the cast album are producers Will Van Dyke, Frank Wolf, Michael Mayer (who directed Groff in his Tony Award-nominated role of Melchior in Broadway's "Spring Awakening") and Alan Menken (who wrote the score to "Little Shop of Horrors" with the late Howard Ashman).

Groff previously won a Grammy Award in the same category in 2016 as one of the principal vocalists on the cast album of Lin-Manuel Miranda's hit Broadway musical, "Hamilton," for which he was also nominated for a Tony for his role of King George III.

A filmed version of the stage musical, featuring Groff, is streaming on Disney+.

Earlier this year, Groff was nominated for a Lucille Lortel Award for best actor in a musical for his role in "Little Shop." Larry Owens won that award for his work in the show "A Strange Loop."

The musical "Little Shop of Horrors," based on a 1960 Roger Corman black comedy film of the same name, originally debuted off Broadway in 1982. It was made into a 1986 film starring Rick Moranis as Seymour, and a new film adaptation of the show is in the works.

The musical is about how Seymour, in order to gain Audrey's love and attention, becomes a minor celebrity when he raises a spectacular man-eating plant in the Skid Row flower shop where he works.

The Grammy Award winners will be announced in a televised ceremony Jan. 31 on CBS.

The other theater albums nominated for the Grammy in the best musical theater album category are "Jagged Little Pill," "The Prince of Egypt," "Soft Power," "Amelie," and David Byrne's "American Utopia."

A stage, film and TV actor, Groff grew up in Ronks and is a 2003 graduate of Conestoga Valley High School. He acted in local theater before moving to New York to act on Broadway.

Groff has been filming the "Matrix 4" movie sequel in Berlin, Germany. It was recently announced that Groff will re-team with his "Frozen" and "Frozen 2" cast-mate, Kristen Bell, to costar in the film "Molly and the Moon," written and directed by the team behind the hit CBS show "How I Met Your Mother."

Groff voiced Kristoff the mountain man in Disney's animated "Frozen" films and had a recurring role the Fox TV show "Glee," and a co-starring role on HBO's "Looking" and Netflix's "Mindhunter." He has also appeared in such films as "American Sniper" and "The Conspirator."

After Tony and Clint Gibble got into toy collecting a few years back, they began buying and selling toys online.