Lancaster County native Jonathan Groff, second from the bottom at left, is part of the reunion of the original Broadway cast of "Hamilton." The group got together from remote locations to sing the title track of the hit musical for 9-year-old Aubrey, second from the bottom on right. The reunion took place on actor and director John Krasinski's "Some Good News" show on YouTube. 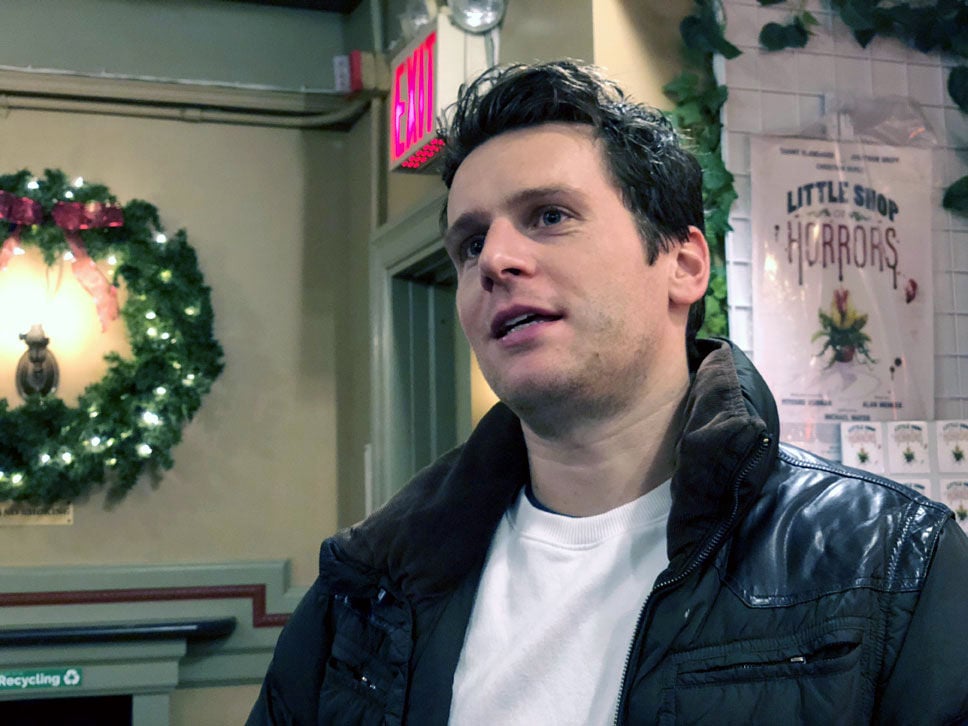 In this December 2019 file photo, Ronks native Jonathan Groff talks about his career after a Wednesday, Dec. 4, performance as Seymour in the off-Broadway "Little Shop of Horrors" at the Westside Theatre in New York.

Lancaster County native Jonathan Groff was part of a virtual Broadway cast reunion Sunday, April 5, that surprised a 9-year-old girl who missed seeing the musical "Hamilton" because of a nationwide theater shutdown.

Groff, a Ronks native and stage, film and TV actor who played King George III in "Hamilton," could be seen as one of the actors singing the title song from the show on a new YouTube show hosted by a popular actor and director.

"The Office" and "Tom Clancy's Jack Ryan" actor John Krasinski, who directed the film "A Quiet Place," costarring his wife, Emily Blunt, created the weekly "Some Good News" show to humorously highlight positive things happening in the world during the global coronavirus outbreak.

As part of the second installment of his "SGN" show, Krasinski and Blunt surprised the 9-year-old "Hamilton" fan named Aubrey via video conference, telling her they would fly her to New York to see the show once the theaters reopen.

The nationwide shutdown, designed to slow the spread of the novel coronavirus, caused Aubrey to miss "Hamilton" in Jacksonville, Florida.

The Broadway show's creator and original star, Lin-Manuel Miranda, had other ideas.

He "Zoom-bombed" Krasinski and Blunt's conversation with the girl, who put her hands in front of her face in surprise. Suddenly, all of the main original cast members of the show appeared on the screen to sing "Alexander Hamilton" from remote locations.

You can see the full video of the show here. It's the second installment of the "SGN" series.

And you can see the video, starting from the point that Krasinski starts talking to Aubrey, below.

Although Groff didn't sing that number in the show, he can be seen among the faces popping up on the screen.

Krasinski's YouTube show is a crowdsourced, DIY affair, broadcast in front of a bookshelf featuring a hand-drawn sign and a hand-spun globe as an opening image. The first episode featured a charming remote interview with his former "Office" co-star, Steve Carell.

Groff, a Conestoga Valley High School graduate, earned a Tony Award nomination for his work in "Hamilton," after having previously been nominated for "Spring Awakening."

After starring in an off-Broadway revival of the musical "Little Shop of Horrors" late last year, Groff was cast in the "Matrix 4" sequel, set for a May 2021 release. As with other Hollywood films, production has been shut down because of the COVID-19 pandemic.

Groff has also voiced Kristoff in the Disney animated "Frozen" films, co-starred in the Netflix series "Mindhunter" and the HBO show "Looking," and had a recurring role on Fox's "Glee." He performed in Lancaster County theaters as a teenager.

Need a pep in your step? So did we. So, we went on the hunt for good things to get excited about happening in the Lancaster County community. …

In the midst of the COVID-19 crisis, grandparents and grandchildren connect over the internet.

Stephanie Blannett bakes her heart out on reality TV