In this screen capture from the trailer for the Broadway-superfan documentary "Repeat Attenders," Jonathan Groff poses for a selfie with a fan in front of the Richard Rodgers Theatre. Groff, a Ronks native, received a Tony Award nomination for his role of King George III in the hit musical "Hamilton," which is still running at the Richard Rodgers. 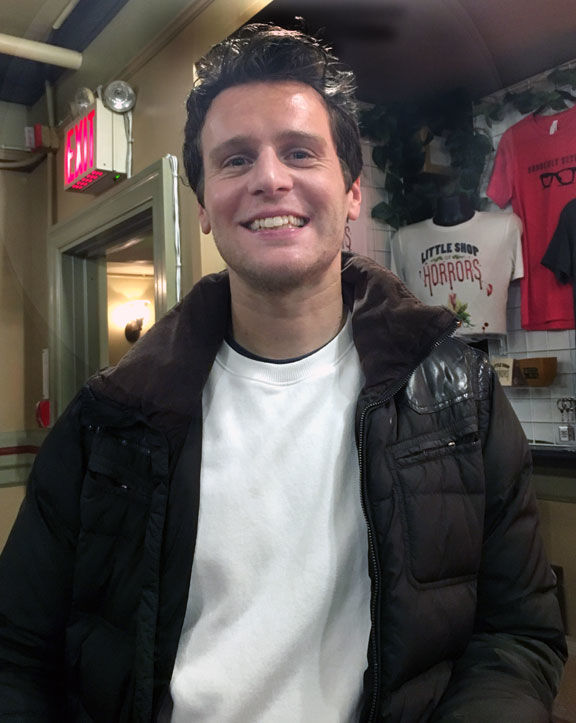 Lancaster County native Jonathan Groff talks about his career after a Wednesday, Dec. 4, 2019, performance as Seymour in the off-Broadway "Little Shop of Horrors" at the Westside Theatre in New York. Groff is featured in the trailer for a new documentary about Broadway superfans.

“Repeat Attenders,” produced by Melbourne, Australia-based independent filmmaker Mark Dooley of Hello Dooley Productions, tells the stories of obsessed fans who have seen the same show dozens of times on Broadway, in London’s West End, in Germany and Australia.

The trailer, released last fall but reposted last week on theater-news websites, shows Groff posing for a selfie with a theater attendee at the stage door of the Broadway’s Richard Rodgers Theatre.

Groff, 34, a Ronks native and Conestoga Valley High School graduate, received his second Tony Award nomination for his role of King George III in the hit musical “Hamilton” back in 2015-16.

Though “Repeat Attenders” doesn’t list Groff as a cast member, the stage, film and TV actor is shown around the 2-minute mark in the trailer, facing the camera and saying, “’Repeat Attenders,’ I love you, and I’m one of you.’”

“Repeat Attenders,” which the trailer indicates features interviews with superfans who say they’ve seen “Cats” 105 times, “Wicked” 30 times and “Starlight Express” 41 times, is set to premiere in the United States in May, BroadwayWorld.com reported last week.

The film is listed as currently being shown in Australia, where the producer's Hello Dooley Productions is based.

The trailer also features a man who was arrested for stalking 1980s pop singer Debbie Gibson, who has appeared in four Broadway musicals, and fans who say they experience a “high” from seeing a show multiple times.

In addition to Groff's stage work — he performed in theater productions in Lancaster County before starring in “Spring Awakening” on Broadway — the local actor has been featured TV roles including Netflix’s “Mindhunter,” Fox’s “Glee” and HBO’s “Looking.” He has been in such films as “Taking Woodstock” and “The Conspirator,” and his current project is filming the “Matrix 4” sequel.

Groff, who voiced the character of Kristoff in Disney's "Frozen" and "Frozen II," recently starred in an off-Broadway revival of the musical "Little Shop of Horrors."

30 years after the Central Park Five case, 'When They See Us' shows why it still matters [column]

Make your own fall wreath, plant a terrarium: 34 classes for plant lovers to check out in November

'Everyone should vote': College campus voting initiatives carry on despite coronavirus pandemic