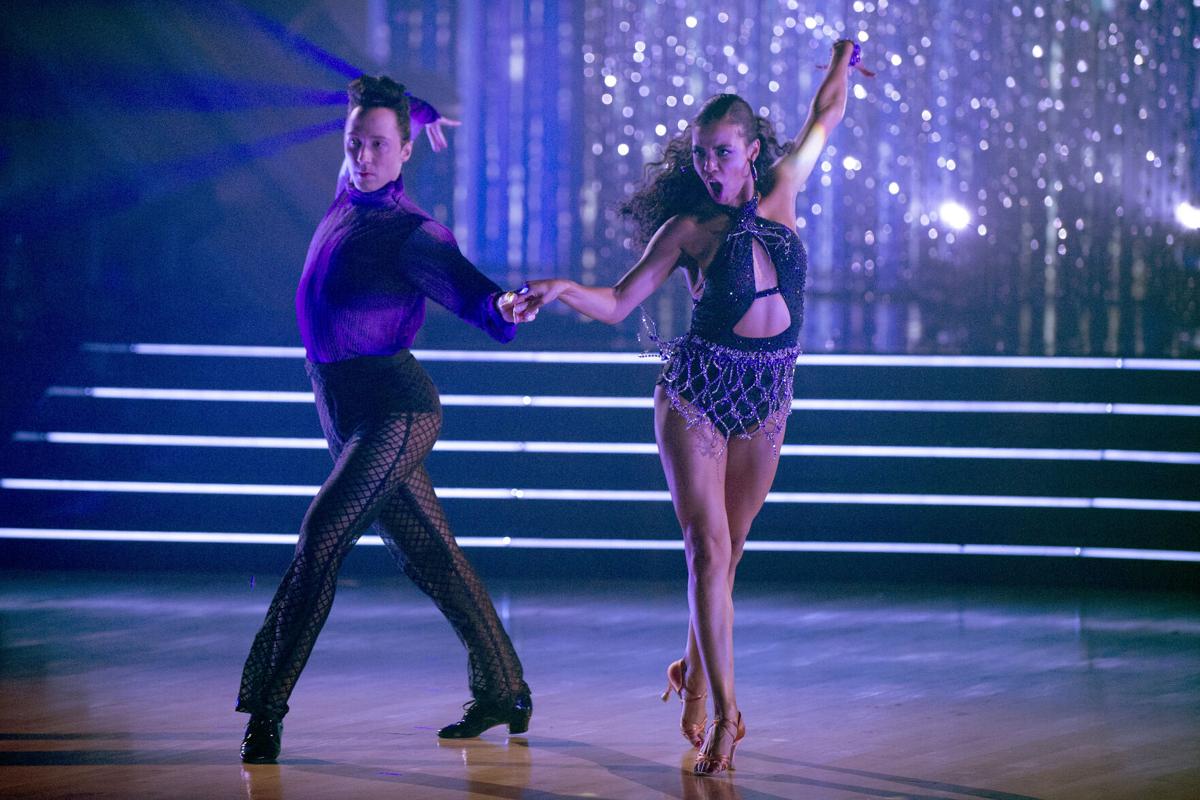 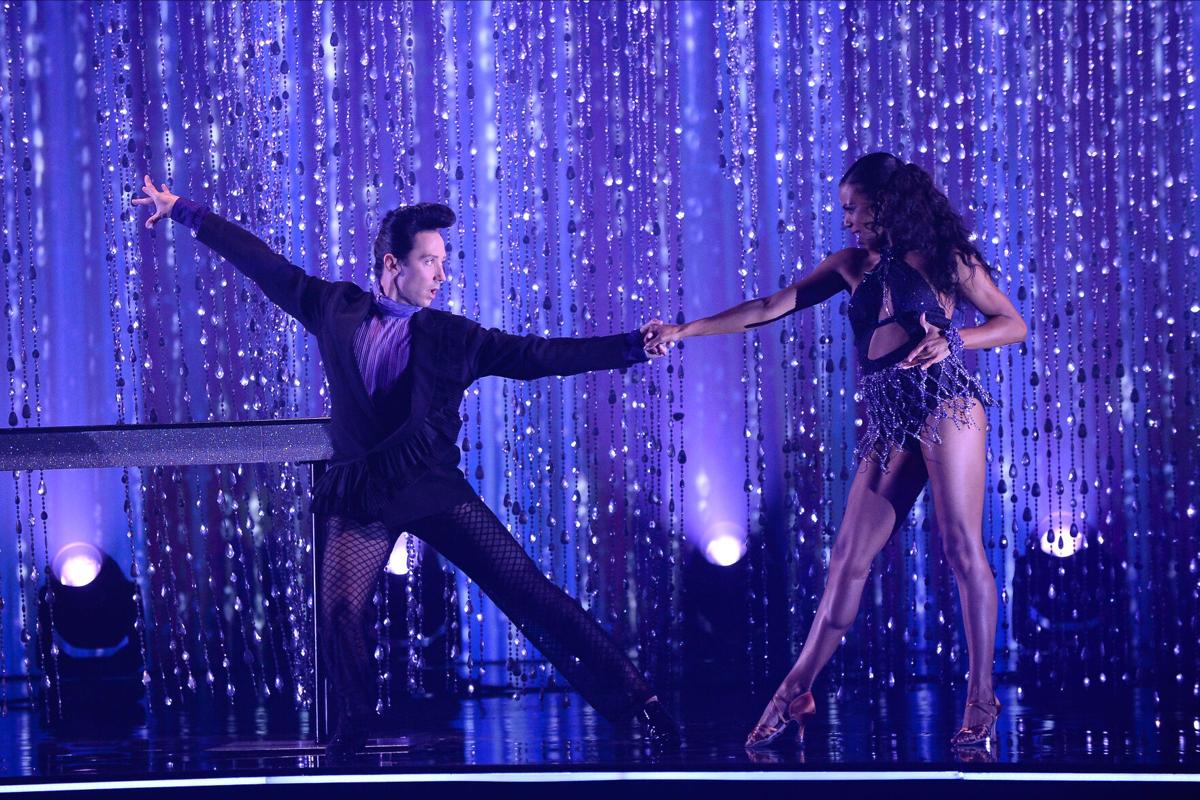 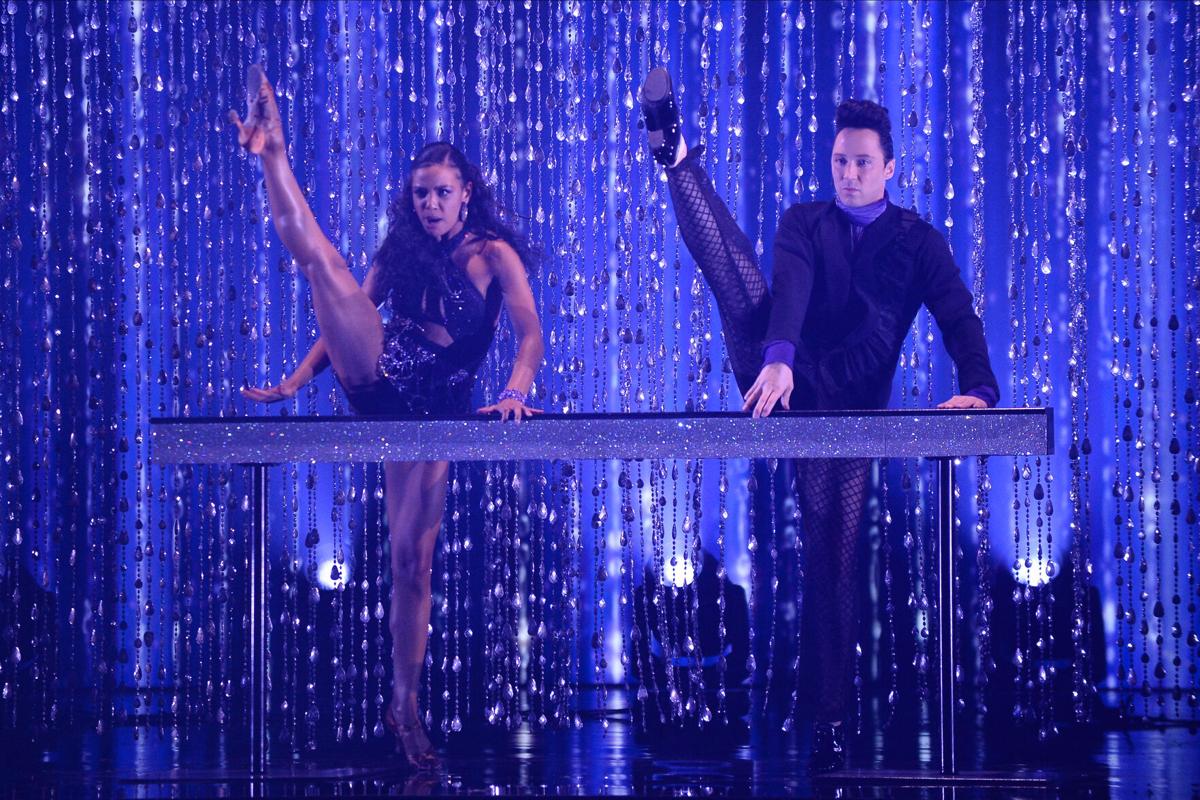 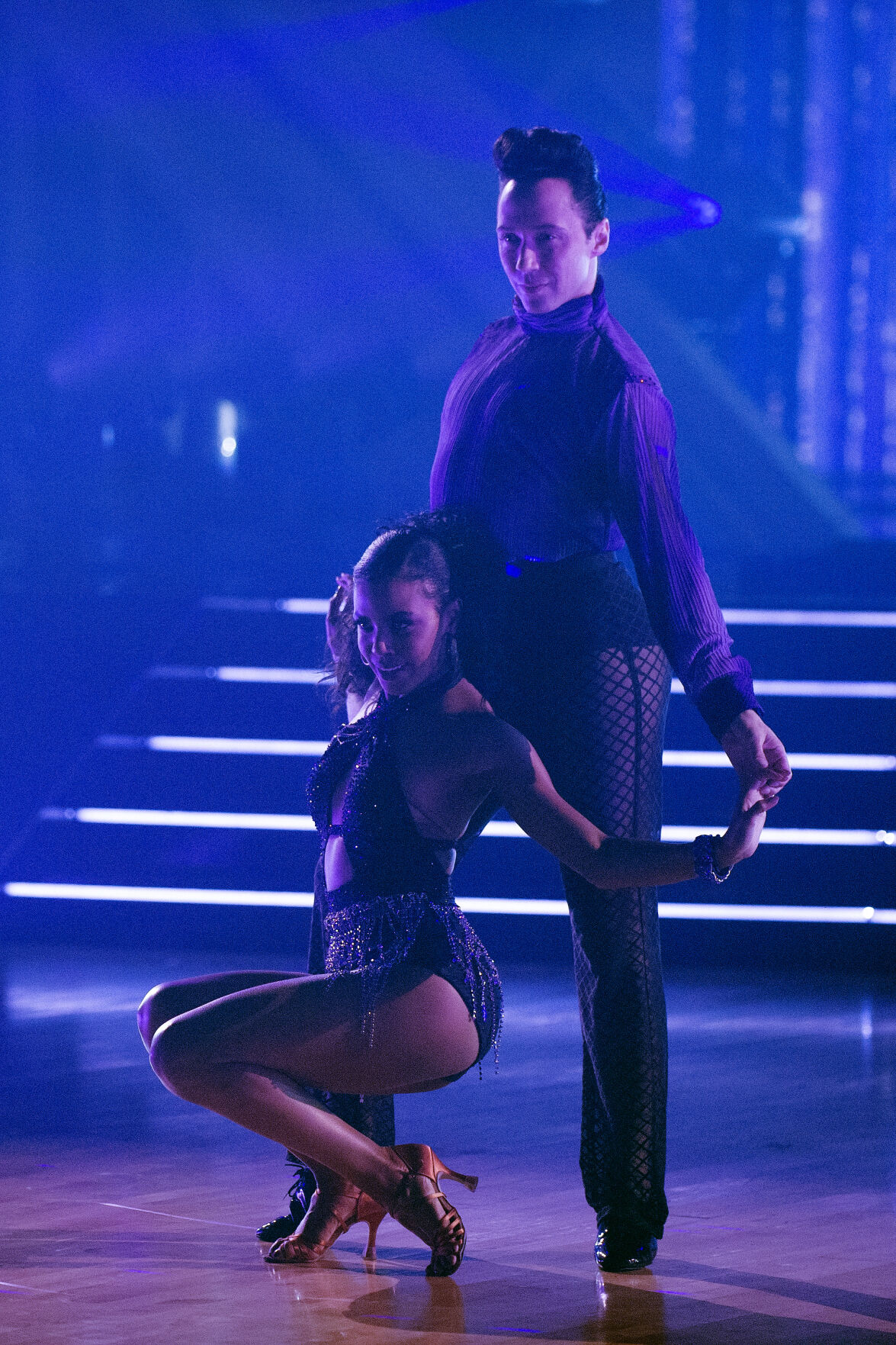 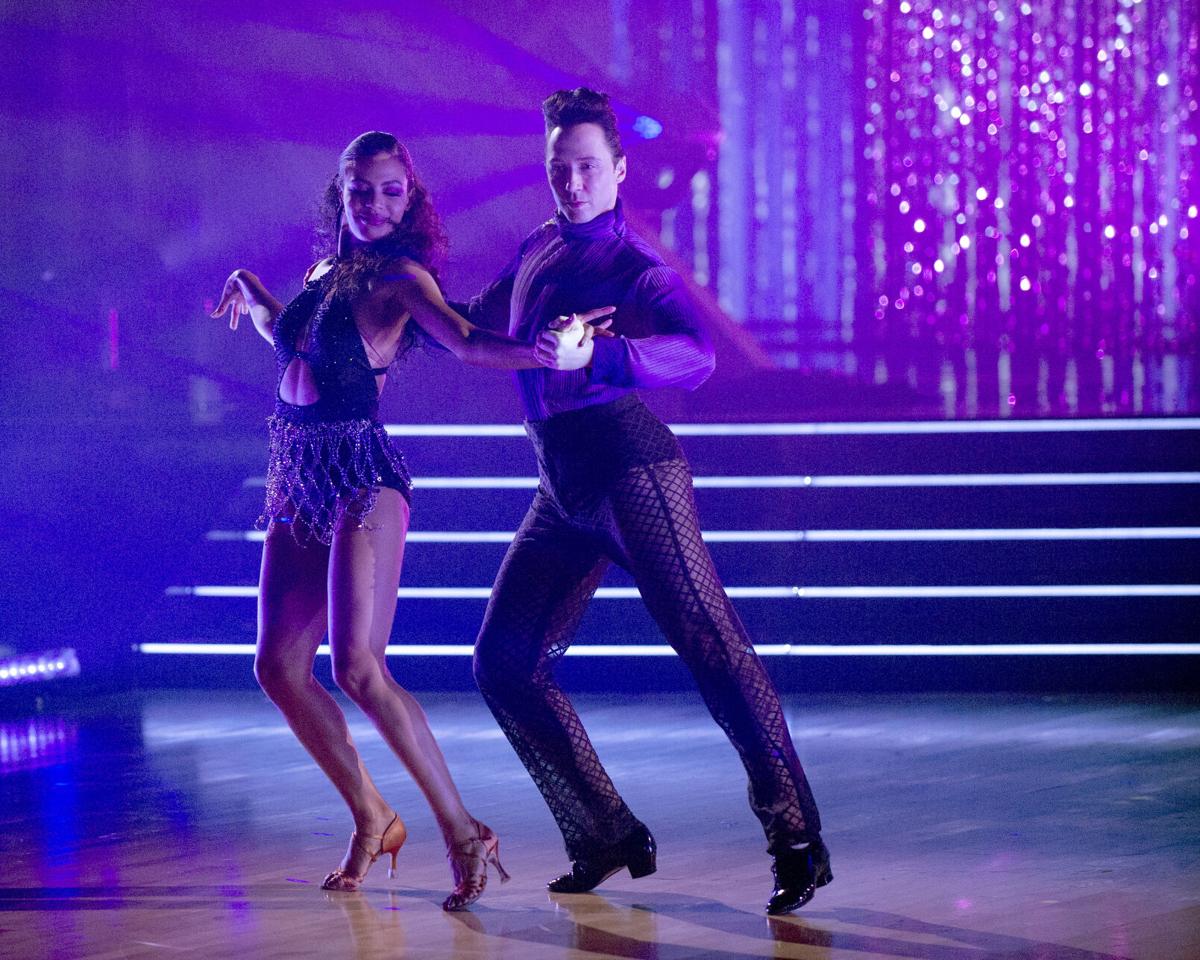 But Quarryville native, figure skater and broadcaster Johnny Weir showed he doesn’t need an audience to bring his usual pizzazz to his latest TV endeavor.

The actor, commentator and TV host took to the ABC ballroom Monday as he performed an assured cha-cha on the first night of the new season of “Dancing With the Stars.”

Slinking down the stairs to the dance floor with his professional dance partner, Britt Stewart, Weir tossed off his jacket to reveal a purple ombre shirt, sheer fishnet pants and his trademark pompadour hairstyle.

Weir and Stewart, who is a new professional dancer on DWTS’ season 29, swung their hips to “Buttons” by The Pussycat Dolls.

Though the judges had plenty of notes for Weir, the couple scored 18 out of a possible 30 points — enough to keep them tied with a lot of other couples in the middle of the pack.

“It’s been a lot of active sportswear and a lot of banana bread these past few months,” Weir said in the clip package in which he met Stewart to start rehearsals. “I’m ready to get pretty." Weir is known for his flamboyant fashion sense.

Judge and former DWTS dancer Derek Hough encouraged Weir to concentrate on his body rather than “get into his head” while concentrating on the technical details.

“I feel like you should have been on this show years ago,” judge Carrie Ann Inaba told Weir.

“Figure skating isn’t like ballroom dancing,” Weir said in a prerecorded clip. “I haven’t had to share my stage with another performer.”

At the end of their live dance, Weir said of Stewart, “How lucky am I to be able to dance with such a brilliant pro? I wouldn’t share my spotlight or my stage with anybody else.”

Many fans of the show on Twitter said they thought Weir’s dance was scored too low, with some predicting he’d be among the finalists at the end of the season.

The energy is a little different in the ballroom this season.

Not only have longtime DWTS hosts Tom Bergeron and Erin Andrews been replaced by model Tyra Banks, but there’s almost no audience, to speak of, in the ballroom studio.

The couples are dancing in front of a handful of people, and the three socially distanced judges: Bruno Tonioli joins Inaba and Hough. For safety’s sake amid the COVID-19 pandemic, at age 76, longtime judge Len Goodman was unable to travel from the United Kingdom to appear in the ballroom. He’ll participate in the show through videos from London.

When the show returns, live, for week two next Tuesday, Sept. 22, the viewing audience will get to vote on the dancers’ performances. For Weir and Stewart, the hastag voters will use is #TeamBriJo.

Monday night also saw “Tiger King” star Carole Baskin dance the paso doble to “Eye of the Tiger” by Survivor, and rapper Nelly do a backflip during his salsa to his own hit, “Ride Wit Me.”

Topping the leaderboard at the end of the night were Disney Channel and YouTube star Skai Jackson and “One Day at a Time” actress Justina Machado.

Celebrity contestants and their professional partners are competing for bragging rights and the Mirrorball Trophy at the end of the seasons.

So much fun!!!! I’m sure you could tell I was nervous but so proud to be here and to have such a wonderful partner in @BrittBStewart! Thank you guys! I love you! @DancingABC #brijo #dwts

On Twitter after the show aired, Weir admitted to being nervous but having had fun.

In the days leading up to the show’s premiere, Weir revealed in a tweet that his grandmother is a huge “Dancing With the Stars” fan, and was begging Weir’s mother, Patti, to find out who Weir is partnered with.

Weir, 36, lived in Quarryville until middle school, when his talent as a figure skater became evident and his family moved to Delaware so he could train.

Weir is a three-time U.S. national champion in men’s figure skating, and has performed with the Fantasy on Ice show. He competed in the 2006 and 2010 Winter Olympics.

He was featured as a skater named Gabe on last year’s Netflix skating drama “Spinning Out.”

Last year, he sang from behind the Egg mask on Fox’s “The Masked Singer.” He has appeared on reality competitions and game shows including “Match Game,” “Family Fued,” “Master Chef” and “Lip Sync Battle.”

He and fellow Olympic skater Tara Lipinski are broadcasting partners, doing analysis at skating competitions and color and fashion commentary on a variety of shows. They’ve co-hosted “Wedding Cake Championship” on the Food Network.

Johnny Weir’s extensions are unreal. Footwork so quick and precise. Great presence and the lunge in the beginning on the bar was top notch. Such a queen. THE 18/30 was DISRESPECTFUL. #DancingWiththeStars

Nelly, AJ McLean and Johnny Weir are going to be the final 3 let it be known. #dwts

Elvis and friends are in the building: Couple embraces return to 'Million Dollar Quartet' at Dutch Apple