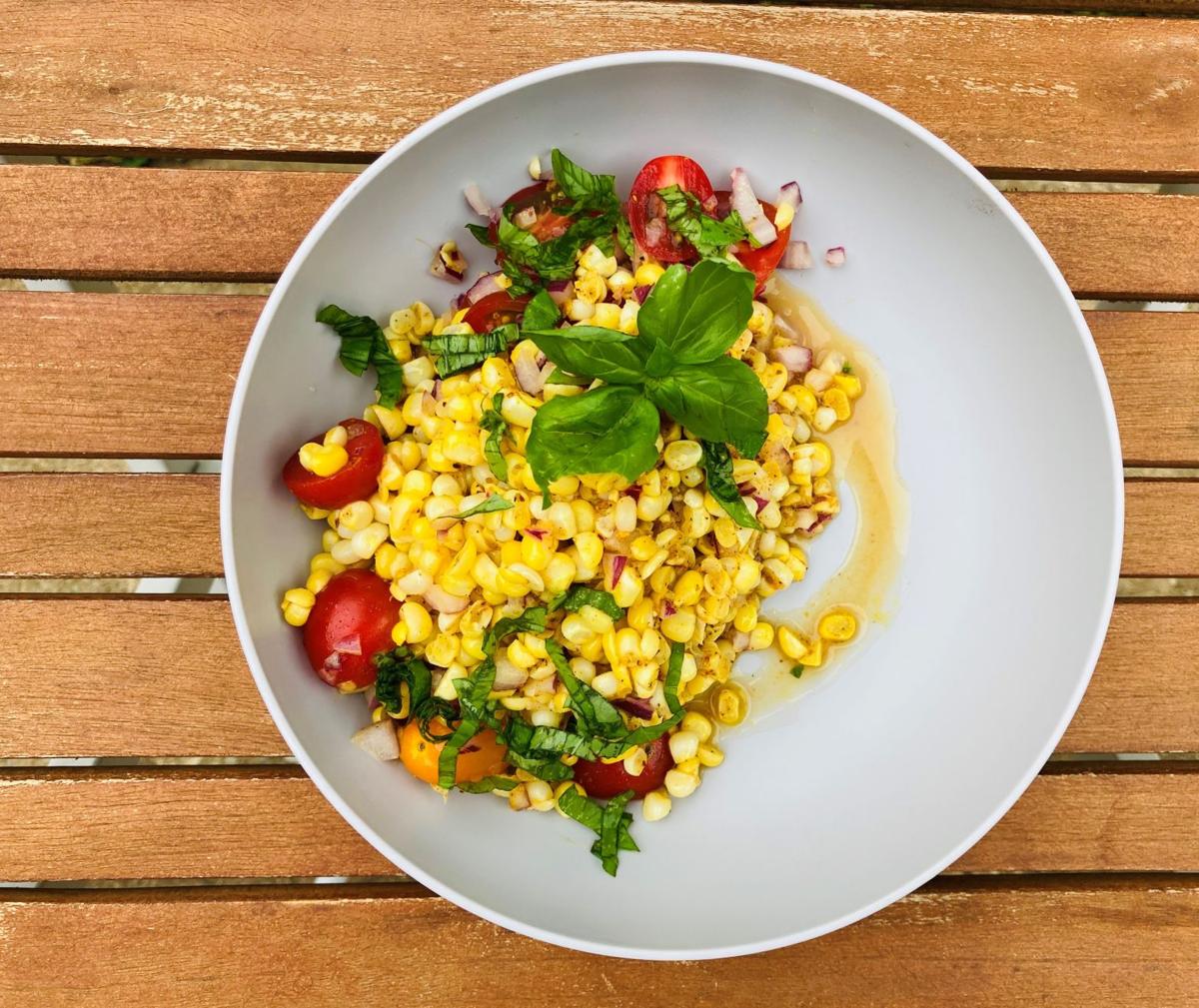 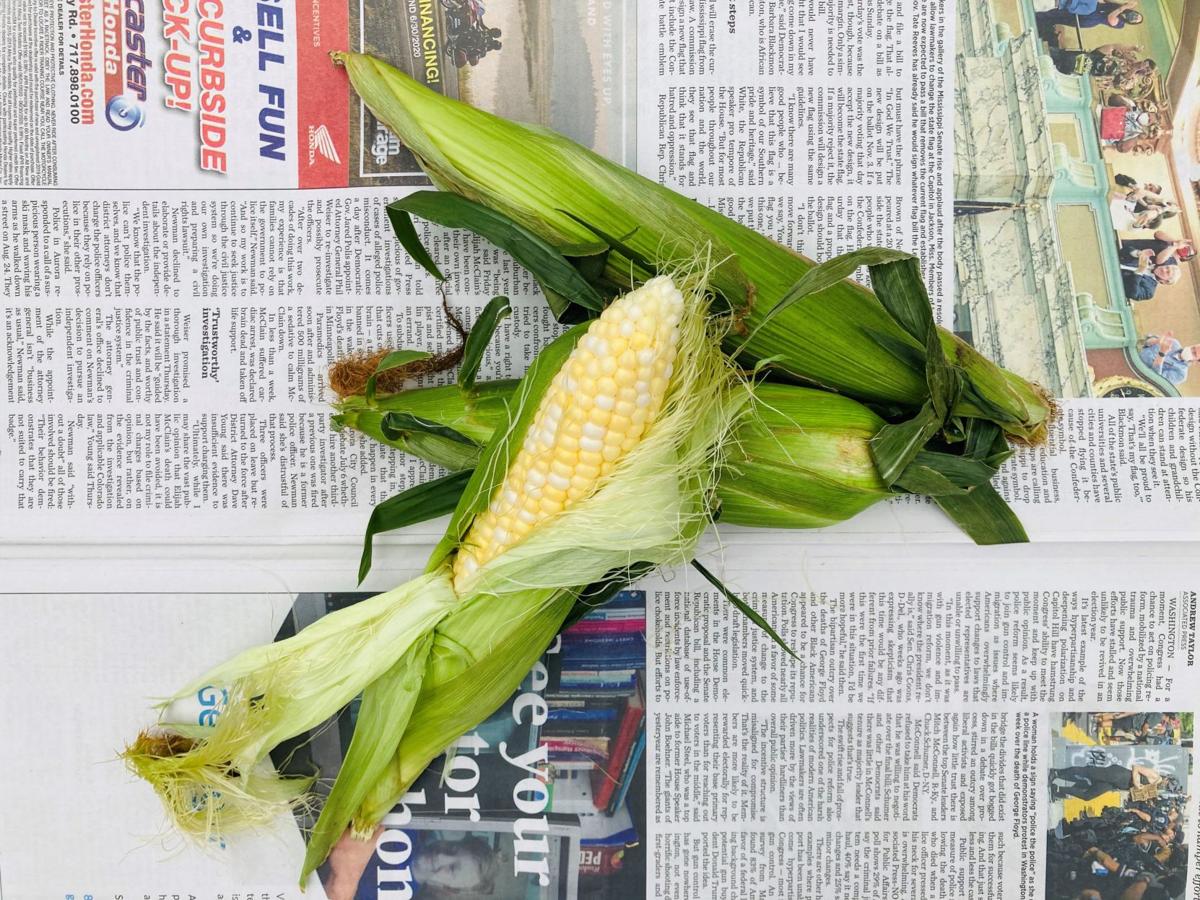 A few ears of bi-color corn from Brook Lawn Farm Market in Neffsville. 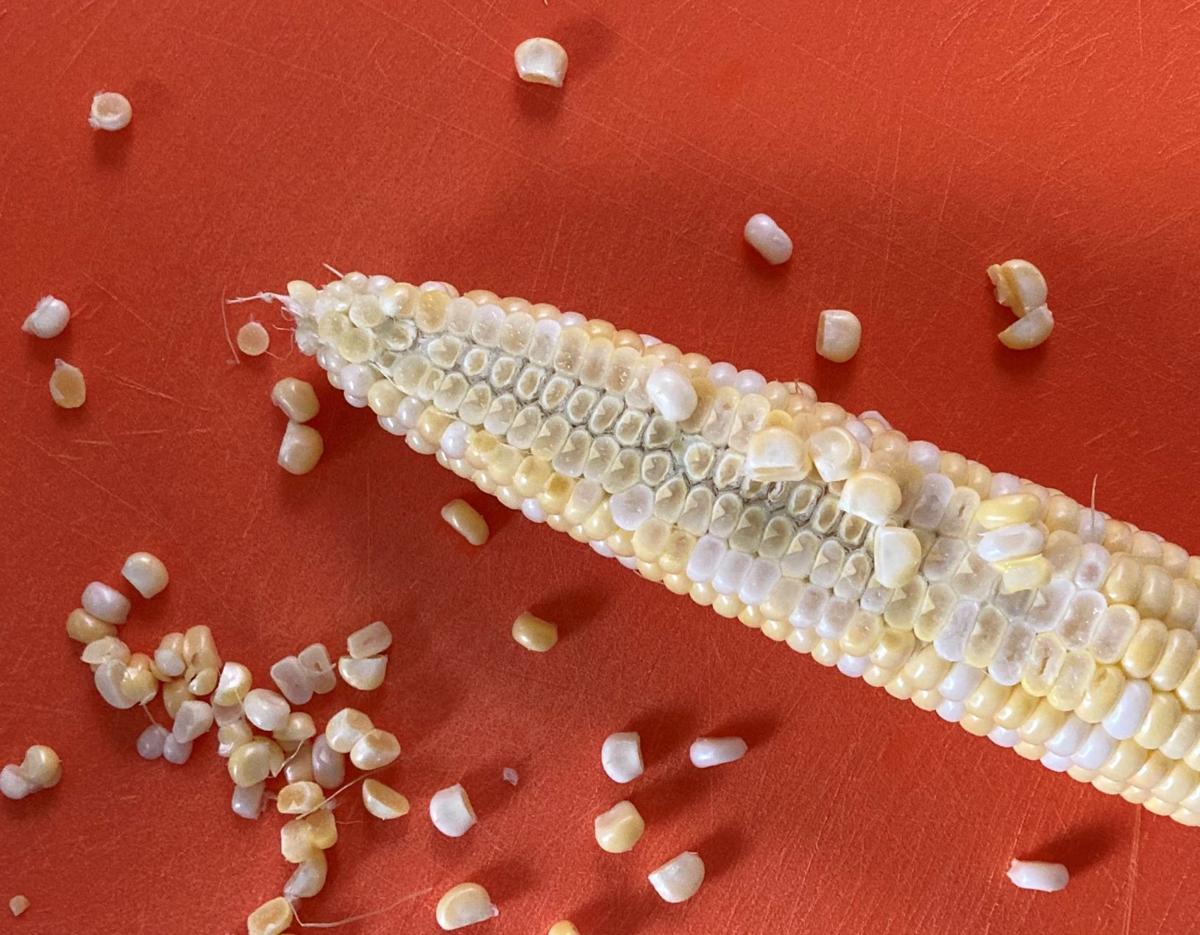 Lay the blade of a sharp knife away from you to remove the kernels.

A few ears of bi-color corn from Brook Lawn Farm Market in Neffsville.

Lay the blade of a sharp knife away from you to remove the kernels.

The long-awaited sweet corn season is here, and one week in, I have already polished off a few ears.

When we lived in Seattle, I longed for the ritual of corn-on-the-cob suppers of my East Coast youth. (Washington corn, typically toothier and less sweet, failed to inspire.)

Fifteen Julys ago, as a columnist for an alt-weekly in Atlanta, I waxed nostalgic about the corn-eating days of my childhood. Here’s a taste:

“My kid brother Tim liked to eat corn on the cob when he was a bald little boy. His 4-year-old blue eyes bright with excitement, he’d grab the cob that was almost bigger than his head and immediately begin attacking it, typewriter style. Left to right, his teeth would graze the kernels, and when he arrived at the end, he’d dramatically lift his head up and pause to the sound of an imaginary bell before he’d swing the lever to the left and continue ‘typing’ onto the next line.

Bring 2 cups water to a boil and add 2 teaspoons salt. Add the kernels from 4 ears of corn (estimate 1 ear per person)and cook for 60 seconds. Drain the kernels and rinse under cold water.

To add a roasted or smoky intensity to your corn kernels, grill the ears first. Two things to keep in mind: Remove the top silk and the outermost husks, then lightly rub the remaining husk with olive oil. When the corn is done, let cool completely before removing the kernels.

“That’s how we all ate corn in the summertime. Boiled, on the cob, with butter and salt. Like typewriters.”

In fact, I don’t think I ate corn any other way until I wanted to be a cook. Can other Pennsylvanians relate?

The Typewriter Method is undoubtedly a transcendentally primeval way to get your fill of local corn, but it is not the only way. In fact, those kernels are pretty darn wonderful — dare I say it — off the cob. Naturally sweet though it may be, corn is extremely versatile, playing nicely with just about everything in the larder, from basil to black beans, chile peppers to curry powder, pasta to peaches, squash to salmon. It is truly hard to go wrong.

Here are some of my favorite ways to branch out beyond the cob. With the gift of a season that lasts all summer long, there is plenty of time to experiment and think outside of the typewriter box.

How to make salsa with sweet cherries [Stay-Put Cooking]

With the par-cooked kernels, now you can get creative. Here’s just one way, for starters: Place the kernels in a medium bowl and add any or all of the following: 1 small handful basil leaves, torn (or flat parsley or cilantro); 1/2 medium sweet or red onion, diced; juice of 1 lime; 2 to 3 tablespoons olive oil; 12 to 15  small tomatoes (cherry, grape, pear varieties work nicely), sliced in half; 1 1/2 teaspoons Madras curry powder (or, 1/2 teaspoon each cumin and coriander, 1/4 teaspoon cinnamon; 1/4 teaspoon cayenne); black pepper to taste. Stir and season until you’re happy. Serve with grilled fish, chicken or as part of a larger vegetable plate.

Bring 1 stick of unsalted butter to room temperature so that it’s soft enough to be pliable. Place in a medium bowl and add any of the following: 1 small shallot bulb, minced; grated zest of 1 lime; 1/4 cup fresh cilantro or parsley, or 2 tablespoons rosemary, chopped finely; 1/4 teaspoon smoked paprika or cayenne or cumin; 1/2 teaspoon salt. With a rubber spatula, mix until everything is well blended and evenly distributed. Taste and modify as needed. Roll into a log, then wrap in plastic wrap, followed by parchment paper. Refrigerate for short-term use or freeze for up to 1 month. Slice as needed.

Off the cob, stir together par-cooked kernels from two ears with 2 tablespoons of pesto and a handful of cherry tomatoes. Eat as a side or build into something bigger, adding 1 cup of cooked orzo pasta.

Grill, then ever so lightly brush with mayo, then roll in crumbled cotija cheese or queso fresco, sprinkle with ground chile pepper of choice and finish with a squeeze of lime. Enjoy corn prepared this way on or off the cob. It’s also really good with a handful of toasted peanuts and scallions.

Husk the corn thoroughly, including the interior silk. Lay one ear on a work surface and position your nondominant hand on one end of the ear to hold it steady. Run the blade of a sharp knife in the opposite direction horizontally along the kernels, turning the cob and repeating until all of the kernels have been removed. Gather any wayward kernels. Each ear should yield 1/2 to 1 cup kernels, depending on the size.

Fold into your next omelet

Just as the egg is ready to be set, Add 1/2 cup corn kernels, maybe some cheddar, basil or prosciutto.

Corn is a dynamite pizza topping. Make an olive oil base with smoked mozzarella or sharp provolone, roasted peppers and/or onions. Heaven.

Before discarding those cobs, make a batch of broth for soups, stews and rice dishes. Freeze and the delicately sweet broth will remind you of sunnier times this winter. In a large pot, combine 2 to 3 trimmed cobs with 4 to 6 cups water (just enough to cover). Bring to a boil, then reduce the heat and simmer for 30 minutes. Strain and use right away or cool to room temperature before freezing. The broth will keep in the freezer for up to 6 months.

Corn kernels play particularly well with blueberries, nectarines, blackberries, even cantaloupe. There’s hardly anything you need to do for seasoning; let the fruit talk to another and do the work for you.

If you love corn, this is important. The season is long but not eternal, so stock up when you can and squirrel it away. Parcook and drain the kernels, then let cool on a sheet pan. Portion into 1- or 2-cup measures in a freezer bag or container and date and label. I guarantee a wide smile in January when you pull out a freezer stash.

Add to stuffed and roasted vegetables

When bell peppers show up at farm stands later this summer, remember to add 1 to 2 cups of kernels to your filling, which might include cooked onion and garlic, rice or quinoa; fresh herbs and maybe some ricotta or feta. This would be equally good inside a zucchini, roasted or grilled.

Blueberries are indeed delightful in weekend pancakes, but so are corn kernels! In fact, I love the bite when the corn meets the maple syrup.

Beat the heat and make fro-yo, with 3 recipes [Stay-Put Cooking]

A Mountville food truck event in May was so successful, the local fire company is organizing a tasty encore this weekend.

How to make scrambled and sunny-side up eggs [Cooking Skool]

Peaches are now in season; here's a recipe to enjoy the fruit with a savory salad

A ripe peach — tender to the touch, floral and honeyed in the nose, slurpy on first bite — is a sensory experience like few others. And that r…

I have wished for the hazy, hot, humid — and tomato-filled — summers of my East Coast youth for much of my adult life. A summer in which I cou…