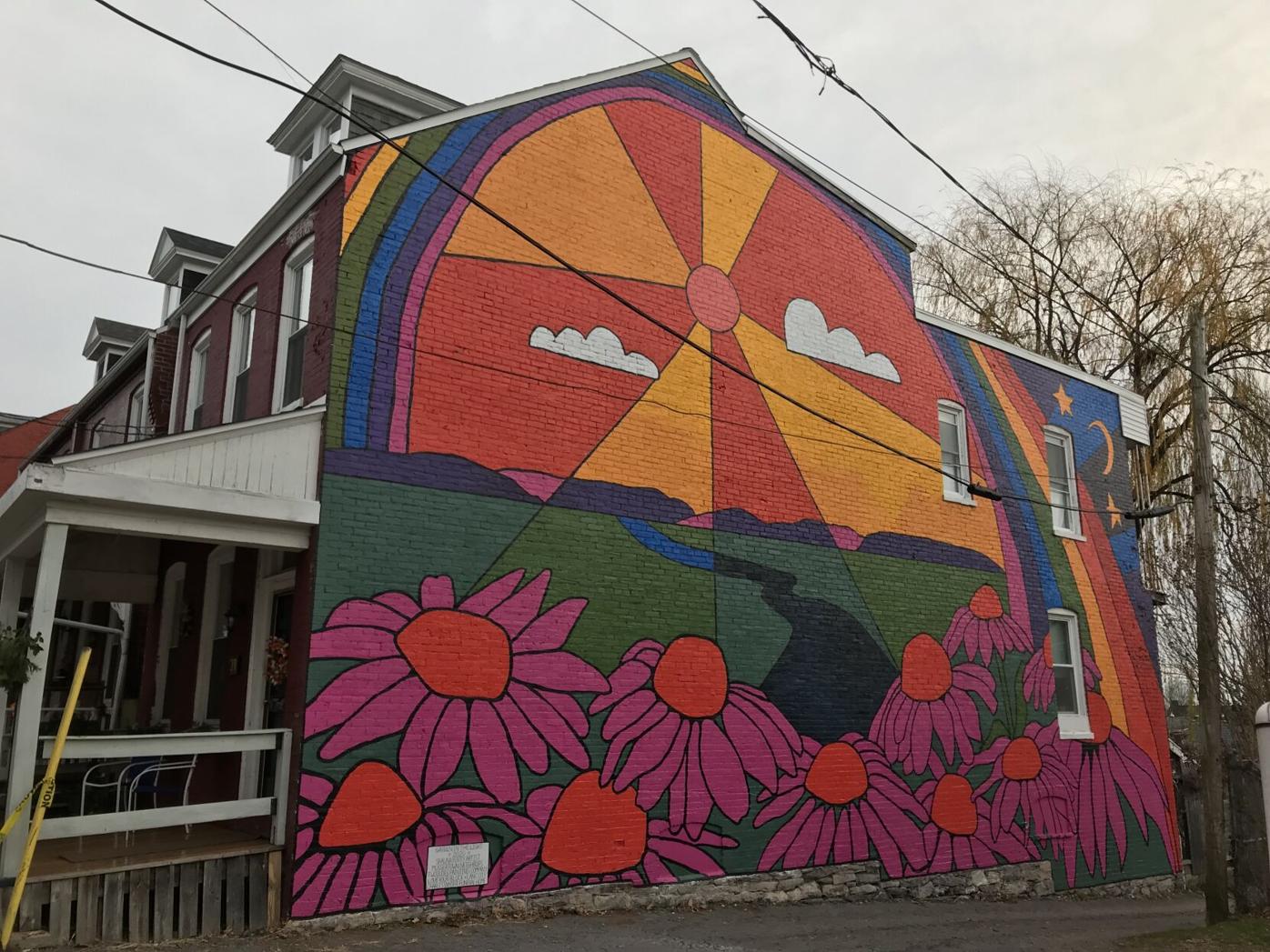 The finished Garden in the Light mural, located at 21 Locust St. in the Mussertown area of Lancaster city. 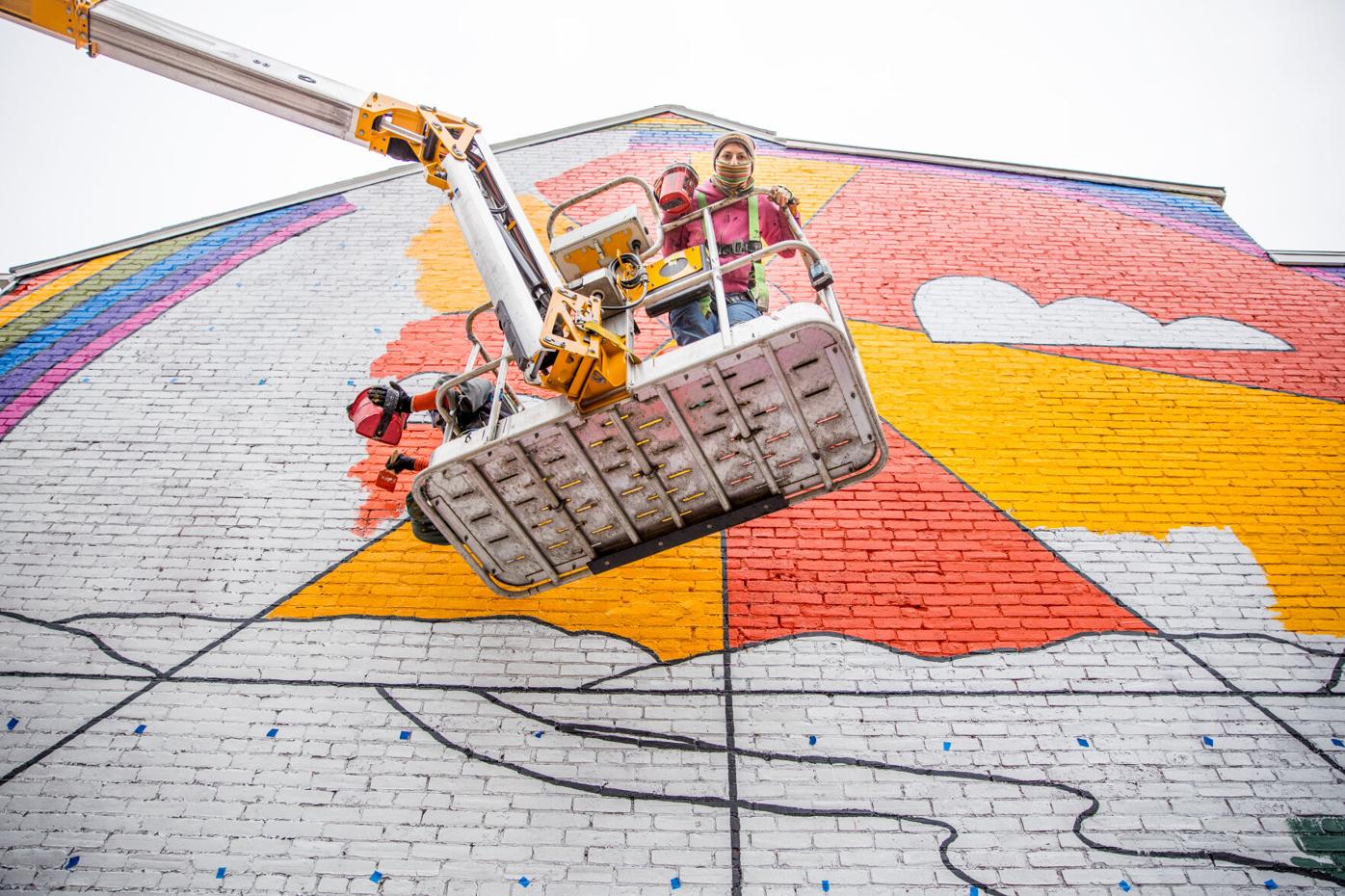 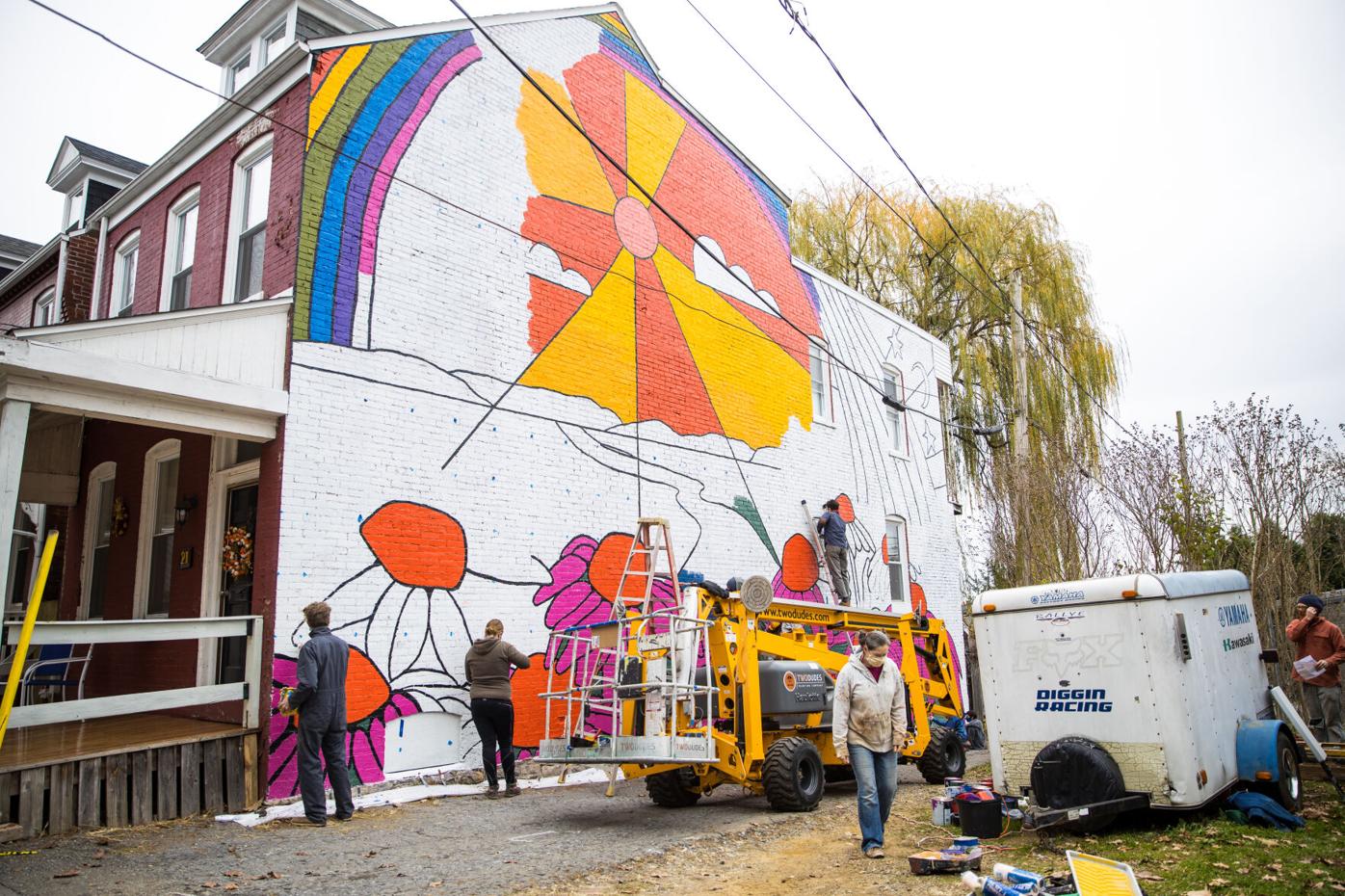 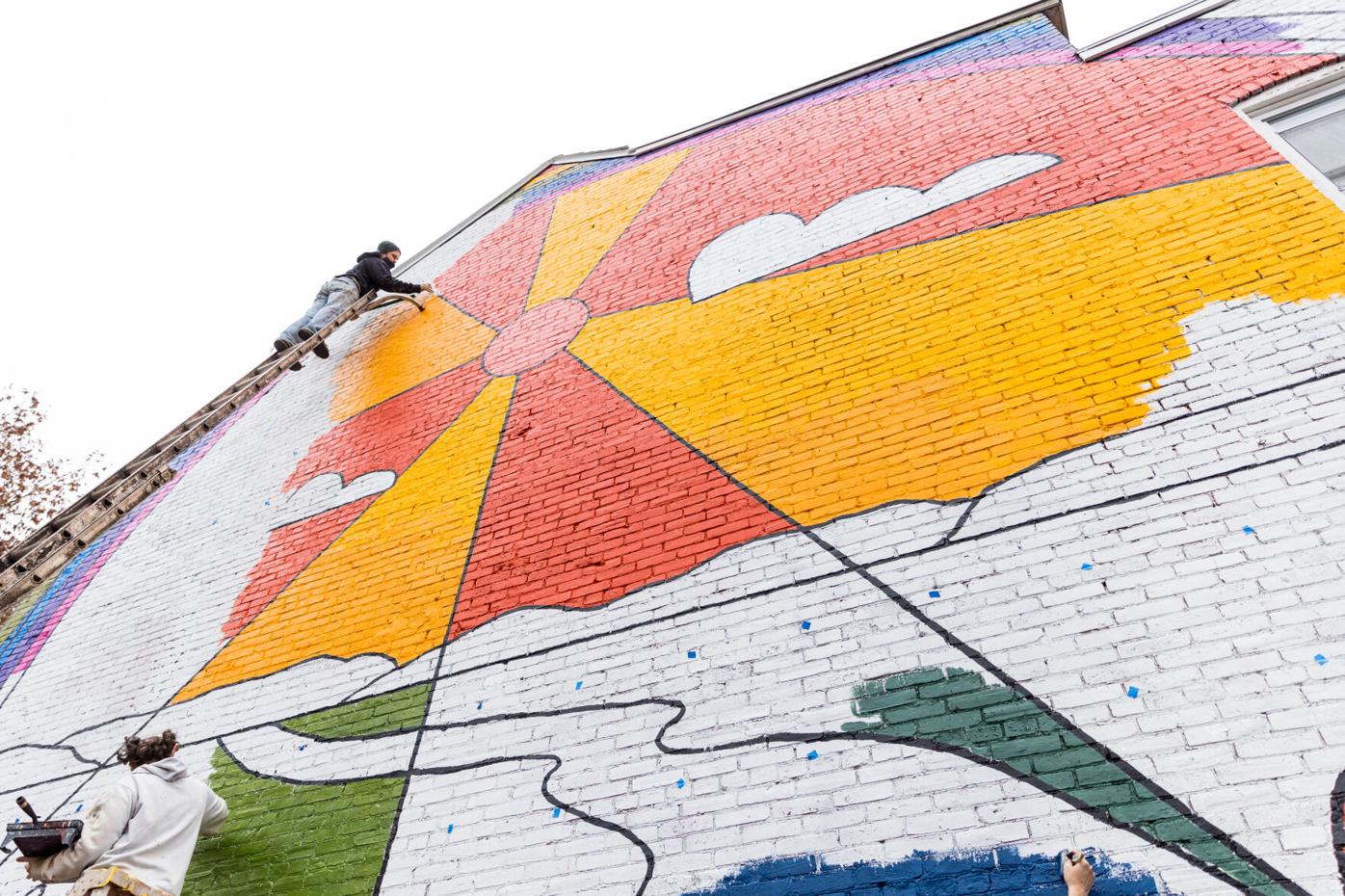 The finished Garden in the Light mural, located at 21 Locust St. in the Mussertown area of Lancaster city.

When Shauna Yorty first moved from Lebanon to Lancaster six years ago, she was struck by her neighbor’s brick wall.

The wall, at 21 Locust St. in the Mussertown area of Lancaster city, overlooks a community garden. In the Light Ministries, on nearby Shippen Street, owns that patch of land, known as Garden in the Light. The garden itself was a huge draw for Yorty when she moved to the neighborhood, but it was the bare brick wall that overlooked the garden that began turning the wheels in her head.

Yorty knew she was going to paint a mural on that wall.

In November, after years of dreaming – and a few more for rigorous planning – Yorty did just that with the help of friends, neighbors and strangers who then became friends.

Garden in the Light collection 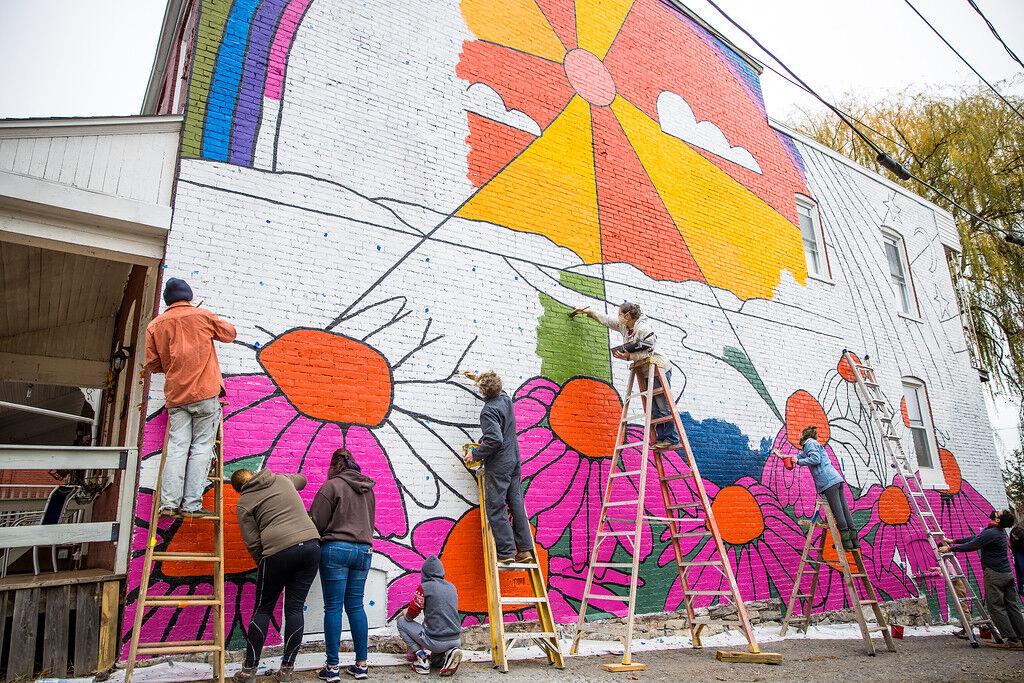 Garden in the Light 1

Volunteers on several ladders help create the mural over the "Garden in the Light." Photo courtesy of Michelle Johnsen 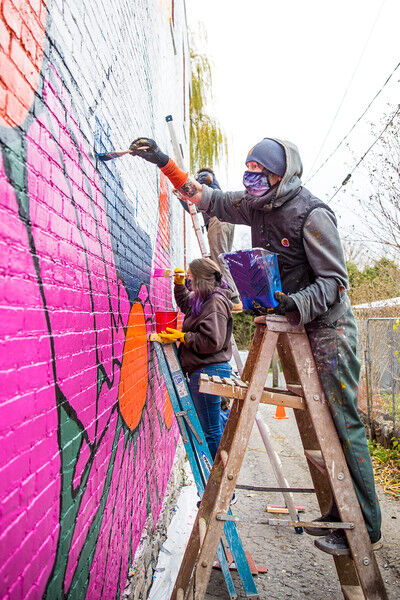 Garden in the Light 2 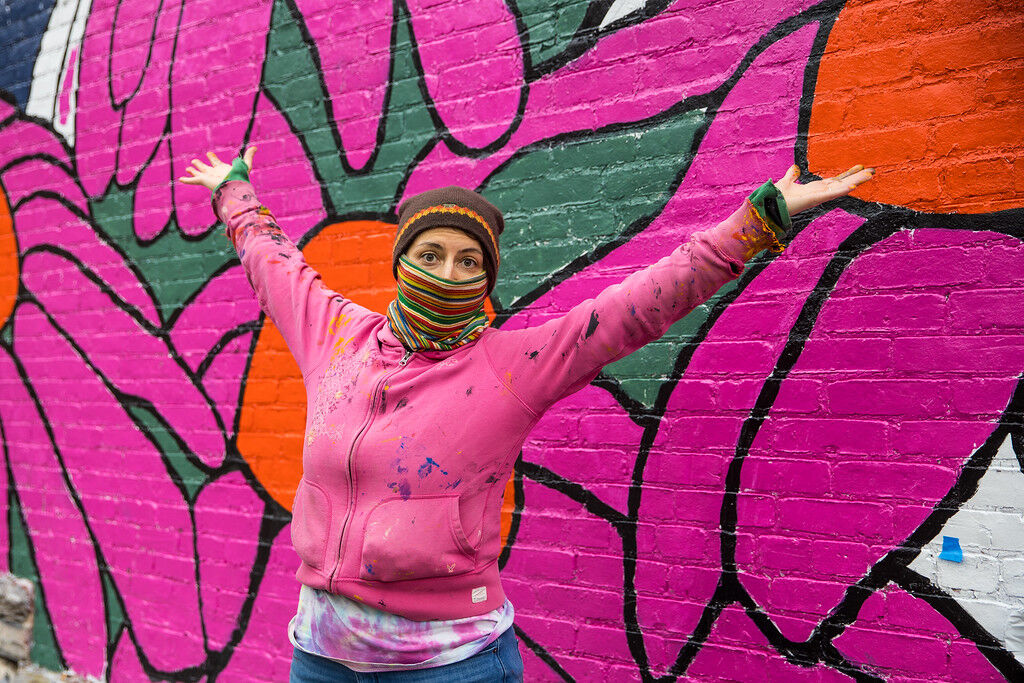 Garden at the Light 3

Shauna Yorty poses in front of the mural she helped spearhead. Photo courtesy of Michelle Johnsen. 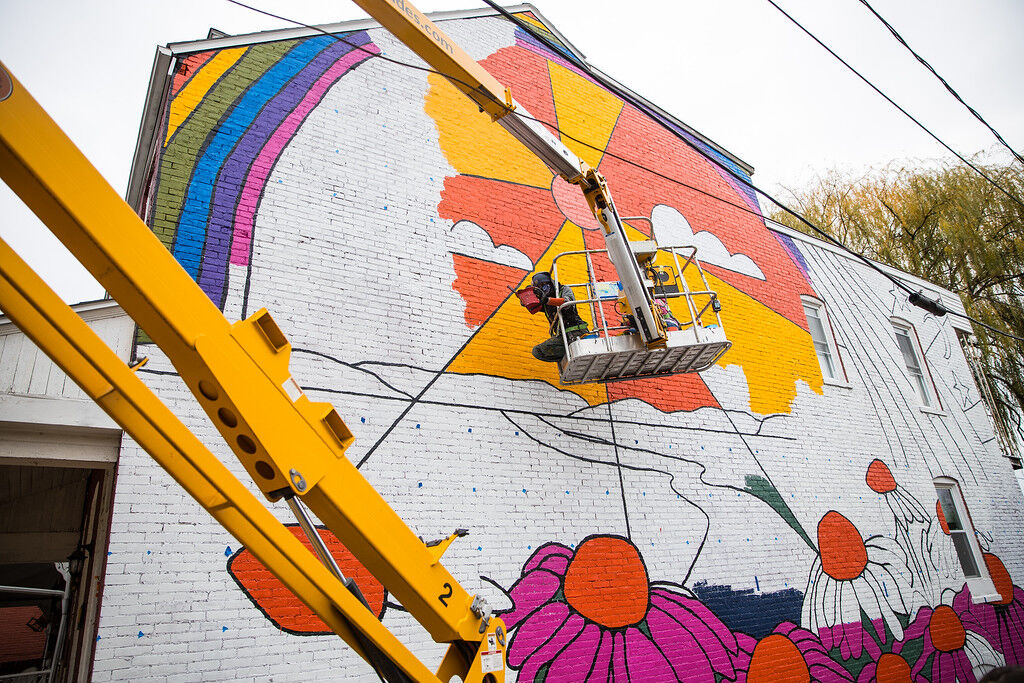 Garden in the Light 4 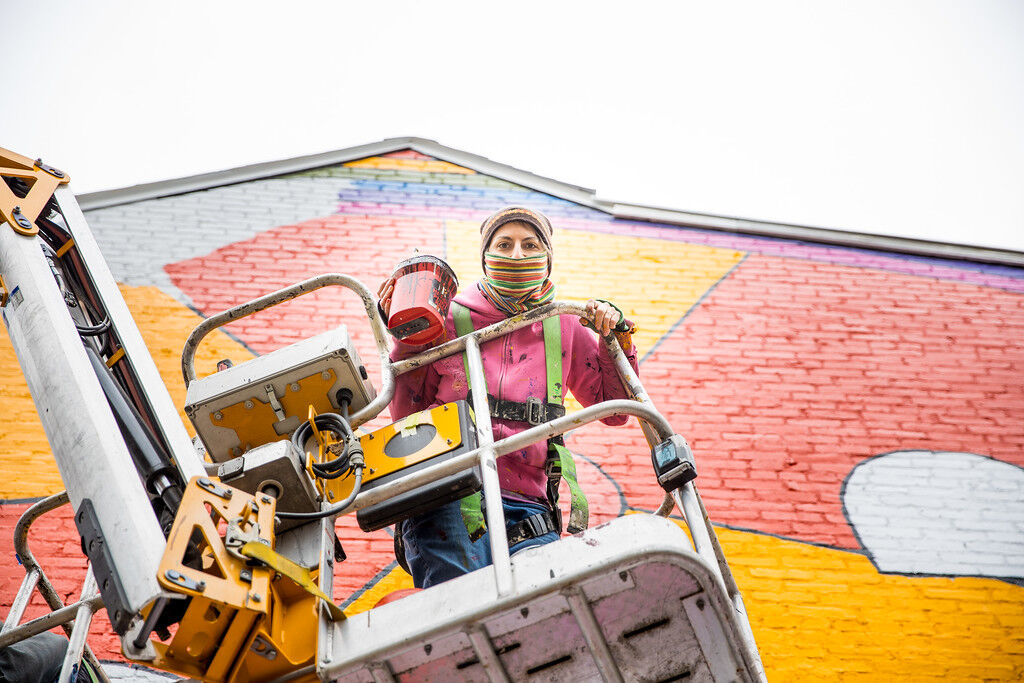 Garden in the Light 5

Shauna Yorty looking down from the lift. Photo courtesy of Michelle Johnsen. 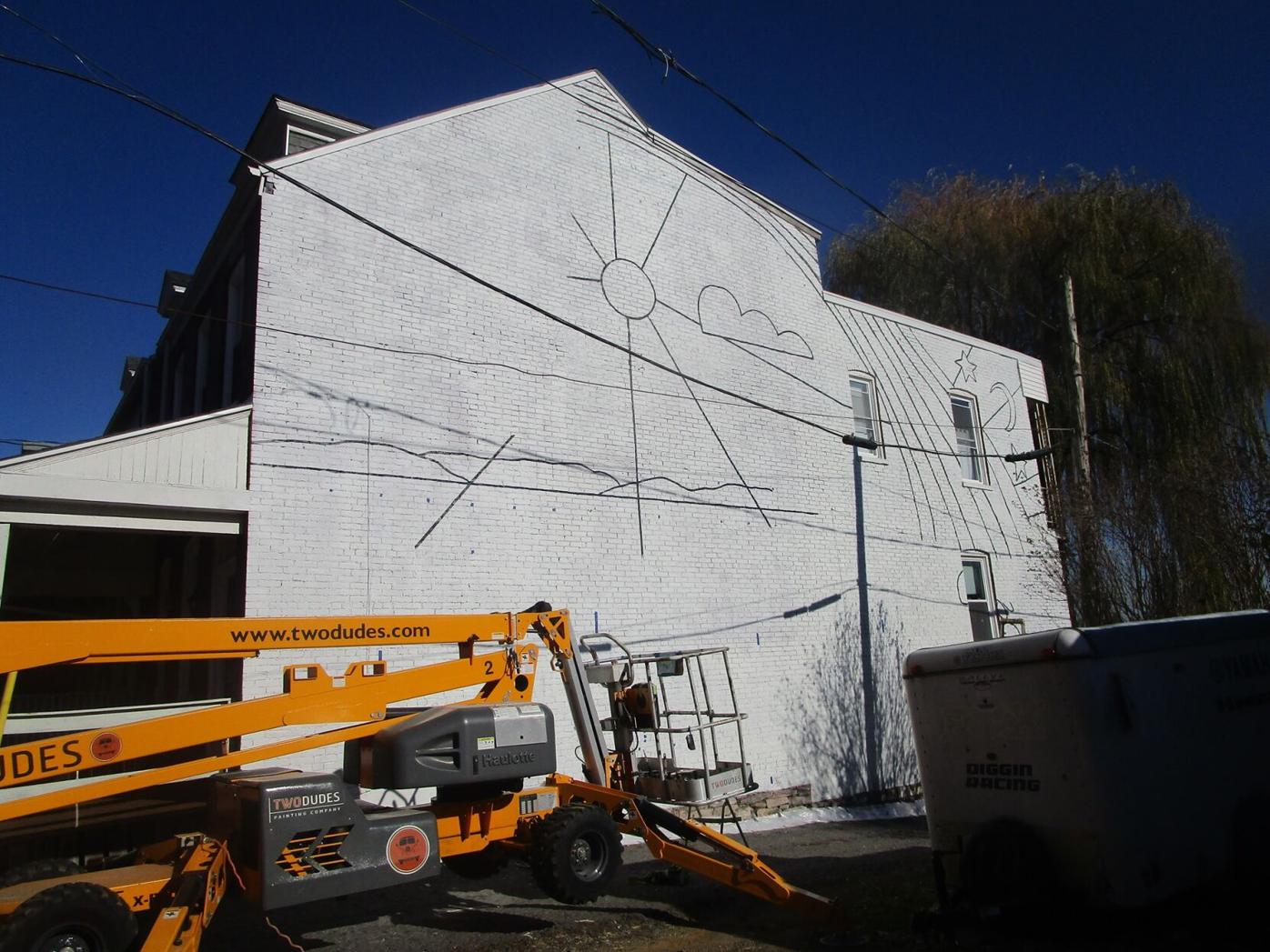 Garden in the Light 6

A look at the beginning of work on the 21 Locust St. wall. Photo courtesy of Shauna Yorty. 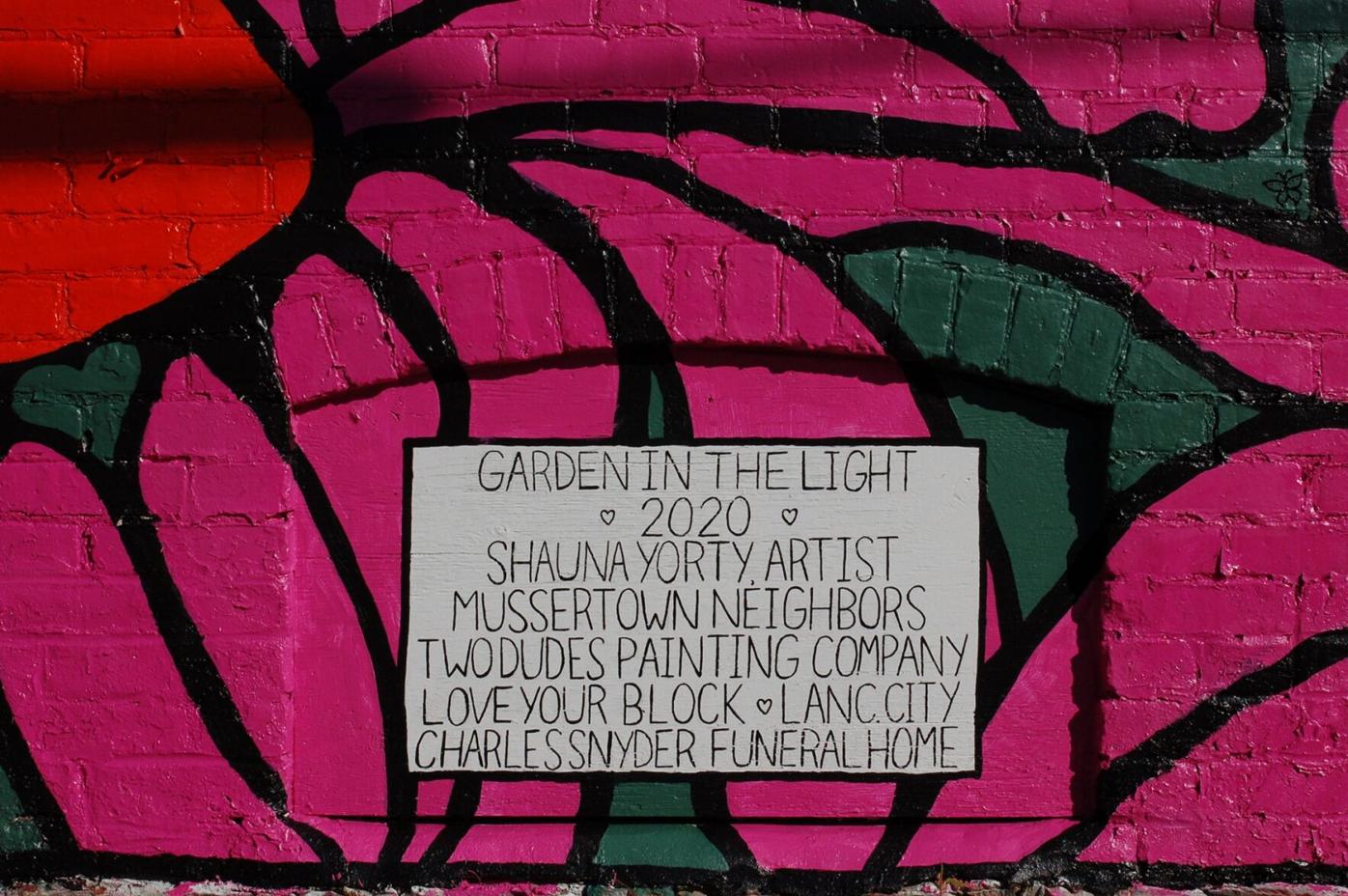 Garden in the Light 7

The marker signifying the mural overlooking the Garden in the Light. Photo courtesy of Michelle Johnsen.

“I feel like I gave birth,” says Yorty, who has a 3-year-old son. “From the conception of the project, it was so much work that I didn’t know was going to happen or hadn’t considered.”

In 2018, Yorty and neighbor Erin Myers started a grant application for Lancaster’s Love Your Block program, aimed at revitalizing the Garden in the Light.

Yorty and Myers used a goal sheet to list ideas such as building a shed, creating wheelchair-accessible flower beds and new seating. Among those ideas, but listed much further down, was creating a mural to overlook the garden.

“I didn’t tell anyone at the time because I didn’t really feel comfortable telling anyone about it, until we started talking about these long-term goals,” Yorty says.

The Love Your Block program started in 2018 as part of a national initiative to help cities and towns revitalize neighborhoods through the improvement of facades, anti-litter campaigns and, recently, public art.

“There’s so much that a mural can do,” says Milzy Carrasco, Lancaster city’s director of neighborhood engagement. “The beautification can help tell a story of what’s going on. There’s a welcoming aspect to the brightness (of a mural) that hasn’t been typically displayed in that two-block radius there. So when you’re able to change that atmosphere through art, it’s something really powerful and incredible.”

The “Love Your Block” grant for the garden was approved in fall 2018, which allowed work to begin and meetings to start about other projects that could be done in the garden. Yorty attended all of these meetings, but she admits she was late for perhaps the most important meeting.

“When I finally showed up, they were like, ‘Oh, it’s nice to meet you. We hear you’re painting a mural on this wall. Let’s do that!’ ” Yorty recalls. “And I’m like, ‘Right now?’ I was thinking it would happen, like, five years from now.”

Yorty received quick approval for the project idea from homeowners Joel and Melinda Dibernardo, as well as from neighbors and visitors to the garden. With a rough plan in place, there was the next challenge: What would the mural look like?

“I sat in the garden a lot for inspiration and thought of the name, Garden in the Light. What do I see when I think of that?” Yorty said. “I thought if this is going to be a community project — which it is — I need to make sure the design is simple. It had to be more accessible if people were going to be painting on the wall and not be overwhelmed by the nitty gritty of it all.”

Yorty drew a few sketches, but struggled to settle on what she wanted. Then she was struck by an idea. With the vision still in her mind, before even sketching it out, she knew this design would be the one.

Inspired by vivid, ’70s-centric colors, the mural depicts a bright rainbow piercing through the day and night skies, overlooking a row of Echinacea flowers. Subtle geographical touches, like the appearance of the Susquehanna River and Furnace Hills, also are incorporated.

By the time of the final preparation meeting in early March of this year, Yorty was ready to get behind a paint brush and being work. She partnered with Two Dudes Painting Company and received financial assistance from Charles Snyder Funeral Home for the project.

That last meeting, coincidentally, happened during the second week of March, just days before the COVID-19 outbreak in Lancaster County. Soon enough, the state was encouraging social distancing, masks and businesses closing their doors to prevent the spread of the virus.

Yorty nixed plans to create a coloring page for the mural and posters designed to inform neighbors about it, but she didn’t give up on the mural itself.

In November, Yorty faced a time crunch, as one of the titular Dudes, Peter Barber, told her that they wanted to try to finish all outdoor projects by Thanksgiving due to the colder weather.

Knowing it would take far more hands than just the four between her and her husband Eli Mailey, Yorty started asking artistic friends for help and also put out a call on Facebook. In the first two days, Yorty and Mailey served as the entire crew on the project. But in the days that followed, word of mouth attracted dozens of helpers, including city officials like Carrasco.

“We love these types of projects and always invite city staff to come down and help because that’s their time to connect,” says Carrasco, who helped paint the black outlining in the center bottom of the mural.

Local artists, including Michelle Johnsen and Keisha Finnie, came to assist, and Mayor Danene Sorace made an appearance as well. Volunteers ages 3 to 64 came from far and wide to assist, Yorty says, and all were properly masked and distanced. Neighbors appeared when they were most needed, like when the lift Yorty and others used to paint more of the mural couldn’t get to every nook and cranny. Enter neighbor Nick Myers, who has no background in art but is comfortable on ladders.

“He said, ‘I’m not an artist, but I can try,’ and then he ended up doing the whole top left of the mural,” Yorty says.

Beth McCaskey, one of Two Dudes’ regular artists, often helps with projects such as these. Even after gridding the project on the wall and painting for the first few days, McCaskey stayed on as a volunteer until the project was finished. She was an important element of the finished product, Yorty says.

“She could have clocked out on Friday afternoon and said, ‘Hey, good luck everyone, it’s been great,’ and she would have fulfilled her duty as an employee,” says Becky Blimline, production coordinator at Two Dudes. “But then she went back out because she was determined to finish it and be part of it. It sounds cliché, but if you’re really passionate and dedicated to your job, sometimes you’ll do it off the clock.”

By the end of two weekends’ worth of painting, Garden in the Light featured a full-time sun and rainbow shining over it. Shauna takes her son, Vincent, to the garden daily to bask in the accomplishment. Of course, now that one wall is completed, Yorty has her eye on others that could use some sunshine, as well.

“I’m so excited to see how what continues and what keeps happening,” Yorty says. “Part of me is like, ‘Oh, it’s over, it’s painted, good, I did it.’ But there’s stuff continuing with the garden and the greater project there, so we’ll be out in the spring again building the community. Having (the mural) as a backdrop for it visually...I couldn’t ask for anything more.”

Older adults have needs, of course.

Just in time for the holidays, one of Lancaster County's busiest bands is dropping covers of two excellent Christmas classics.

Entering his final year of homeschooling, Jared Brown envisioned a 2020 fall semester that involved actual classrooms at a university a few ho…

How Millersville University got giant snakes into a holiday music video

Haul out the holly, put up the tree and … don’t forget the snakes?

When the idea of extended time at home was just a concerning potential back in March, Prof. Dennis Weiss prepared accordingly.

Tipping your servers was already a vital concept pre-pandemic, and now, in the wake of Gov. Tom Wolf’s most recent shutdown order, it’s more i…

'One shining light': How new mural at Shippen, Locust streets came to be [photos]

From its rolling farmlands to its ornately crafted architecture to its downtown skyline — there's a lot of beauty in Lancaster County.