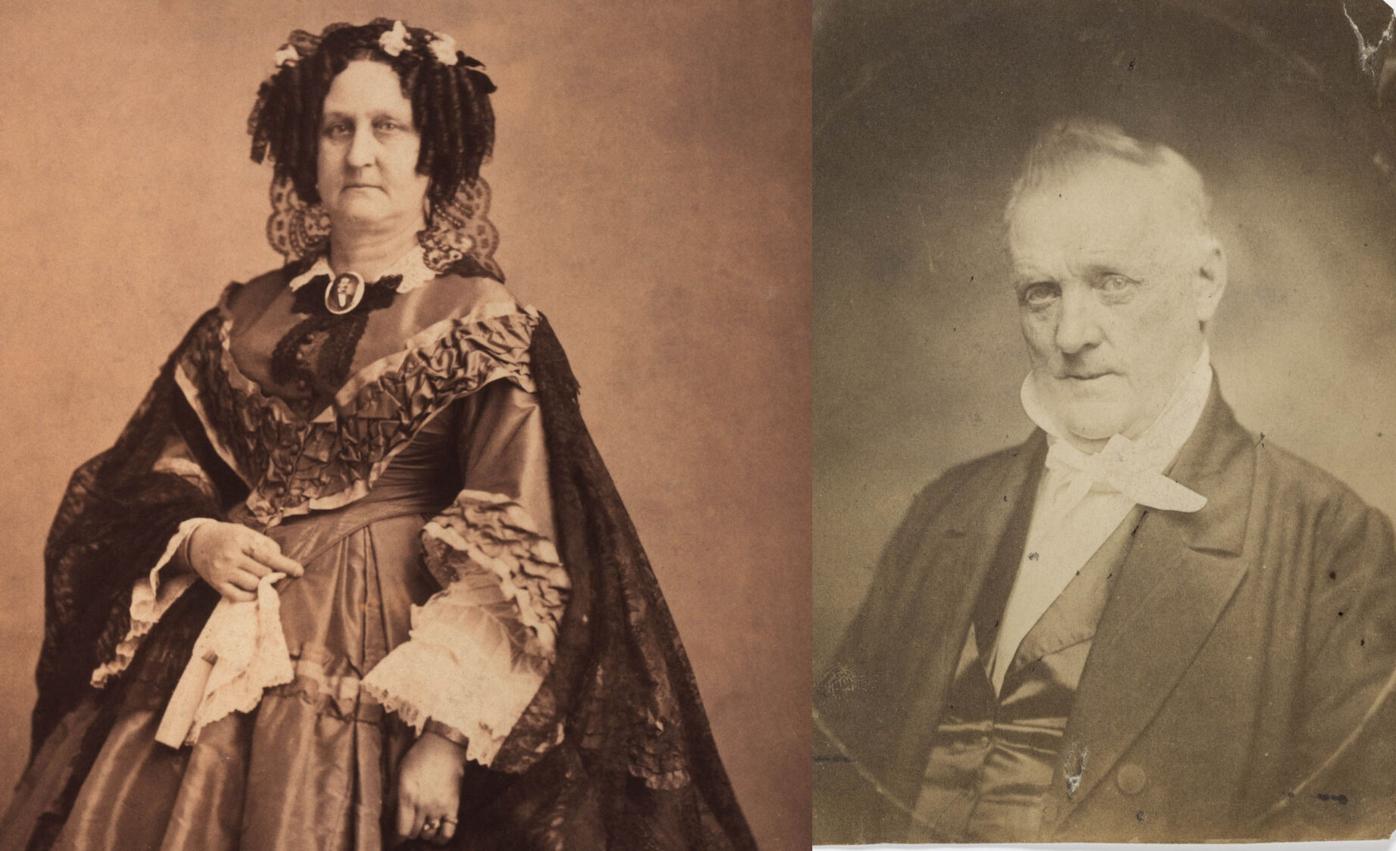 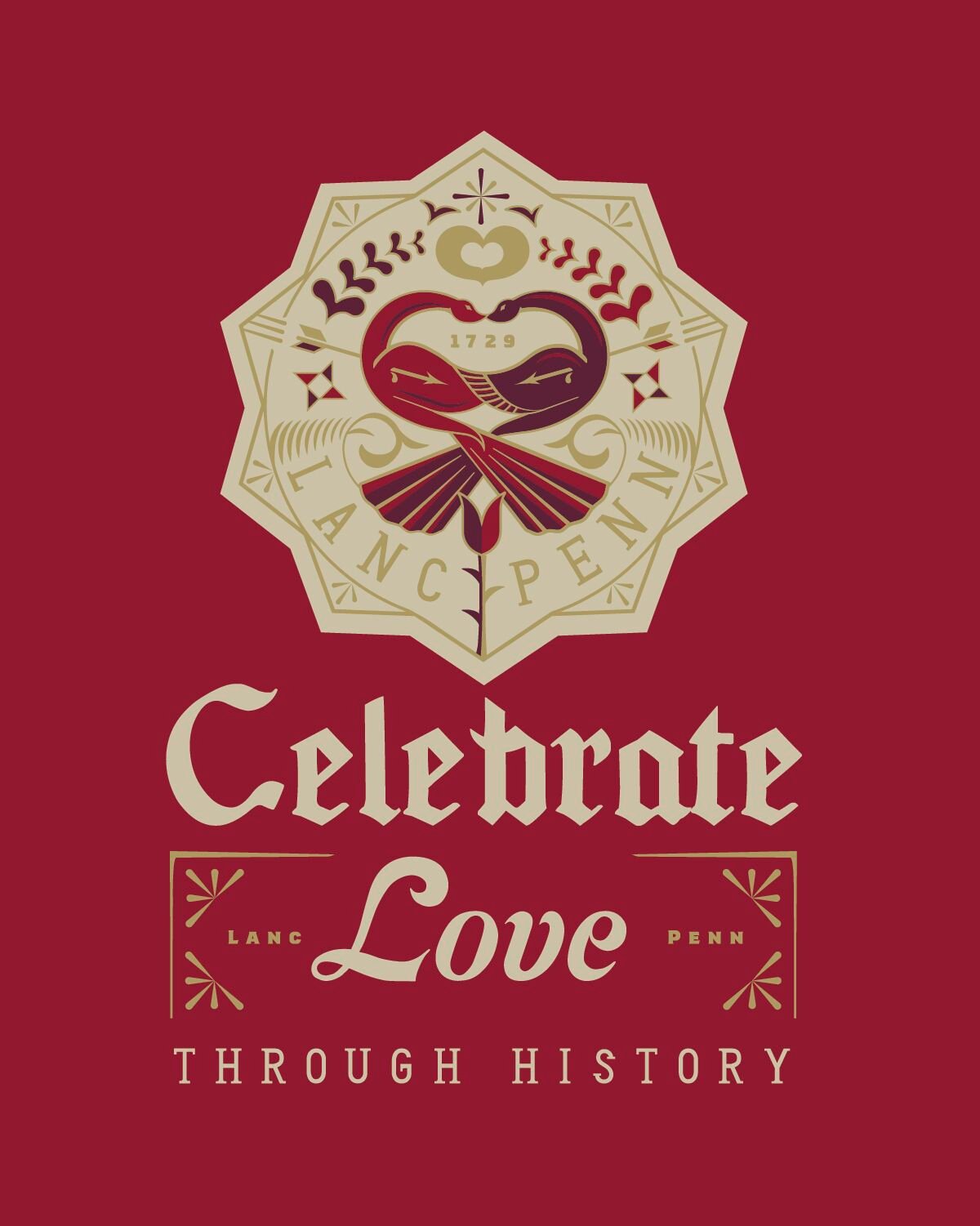 T-shirts with this logo will be part of a gift bag those virtually attending the Valentine's Stay-at-Home gala to raise money for LancasterHistory. 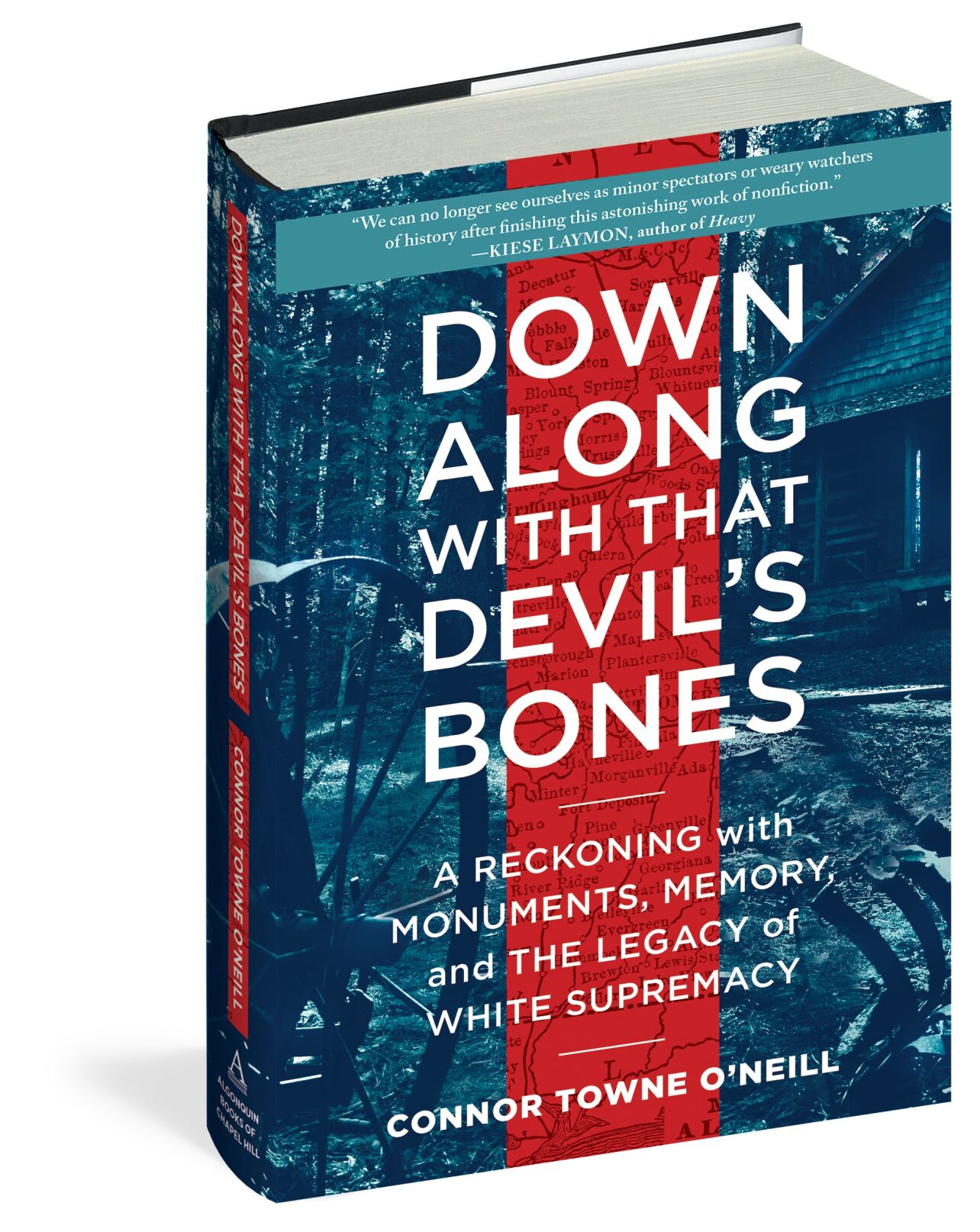 "Down Along with that Devil's Bones" is a book by Lancaster native Connor Towne O'Neill, who will be part of LancasterHistory's virtual speaker series. 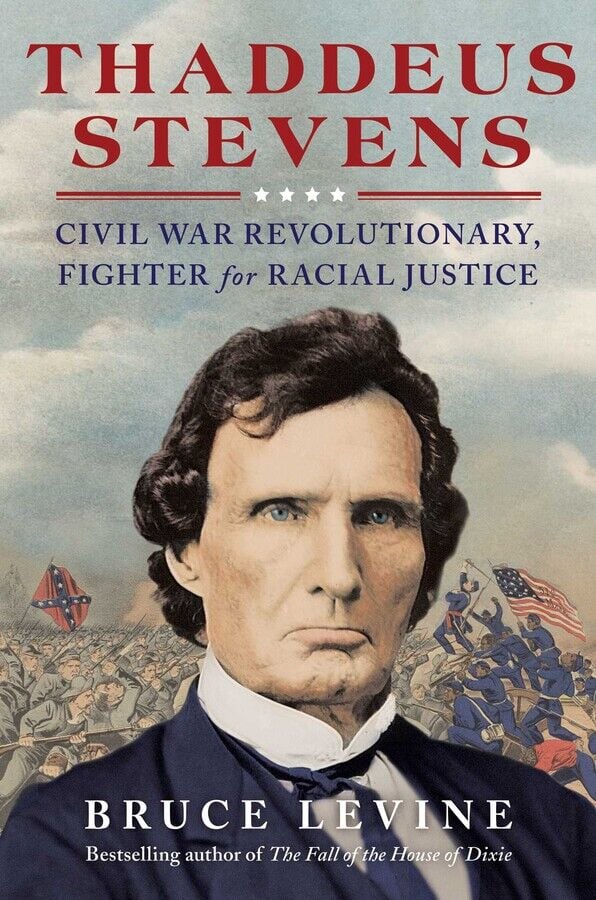 The new biography "Thaddeus Stevens: Civil War Revolutionary, Fighter for Racial Justice," by Bruce Levine, will be released March 2. Levine is one of the speakers in LancasterHistory's virtual spring series.

LancasterHistory and James Buchanan’s Wheatland may remain closed to visitors because of the pandemic. But the local history organization still has a full schedule of events to offer the public between now and May.

Presentations about Thaddeus Stevens, controversial monuments and Lancaster architecture, along with a Valentine’s Day fundraising gala and a special Presidents Day tour of Wheatland, are among the history organization’s upcoming virtual offerings.

On Presidents Day, Monday, Feb. 15, visitors can not only take a virtual guided tour, via Zoom, of James Buchanan’s home, but can eavesdrop on a conversation between the nation’s 15th president and a close friend from the Roosevelt family, says Patrick Clarke, director of Wheatland.

“We’re going to make it something a little special,” Clarke says. At 10 a.m. and again at 1 p.m., the tour guide will begin by taking those tuning in via Zoom on a tour of the mansion.

“We’re going to go through the first three rooms, and provide an interpretation of Mr. Buchanan and his life and his family here at Wheatland,” Clarke says. “But when we get to the fourth room, which is the president’s private sitting room, we’re going to have a special living-history element ... which will consist of a conversation between the retired president and his good friend from Oyster Bay, New York,” Cornelia Van Ness Roosevelt.

“You’ll get to see two of our volunteers portraying Mr. Buchanan and Mrs. Roosevelt in the year 1864,” Clarke says. Their conversation is based on the contents of an 1863 letter Buchanan wrote to Roosevelt, he adds.

The two were close friends, he says, visiting each other’s homes from time to time, and meeting at Bedford Springs, where they both liked to vacation in the summer.

“The topics they’re discussing (during the tour) are very relevant to the year 1864,” he says. “There’s gossip, but there’s also a political discussion.”

Roosevelt, through her marriage to prominent New York attorney James I. Roosevelt, would eventually become the great-aunt of future president Theodore Roosevelt.

“Mrs. Roosevelt ... was extremely aware of what was happening not only in the nation but also worldwide,” Clarke says. “Her father ... had served as the ambassador to Spain for the United States, so she spent a good deal of her life in Spain, rubbing elbows with the queen and king.

“In the course of this little conversation, Buchanan will chat about mutual friends,” Clarke says. “And then, as Buchanan oftentimes did as a retired politician, he will share his perspective on who was responsible for the hastening of the catastrophe of the Southern states’ rebellion” and secession ahead of the Civil War.

And, in Buchanan’s words, Clarke says with a laugh, “it certainly wasn’t him. He takes no responsibility.”

After the tour group hears that conversation, and as it is led virtually through the rest of Wheatland mansion, Clarke says, people “will be able to ask questions in real time, not only of the tour guide ... but of Buchanan and Mrs. Roosevelt” by typing them into a box on their computer screens or other devices.

“That’s one of the nice, interactive features of doing these webinars on Zoom, that folks can ask as many questions as they want,” Clarke says.

The tour is suitable for all ages, he says, and will last about an hour.

Wheatland will offer regular 45-minute virtual tours of the mansion at 10 a.m. and 1 p.m. on Thursdays and Saturdays, beginning this week, Clarke adds.

The Valentine’s Stay-at-Home Gala, which raises money for the organization’s educational programs, will feature an online program, Sarratt says.

“It’s almost like a pep rally, a look back at what we’ve accomplished in this strange year, but also give a little bit of a sneak preview of our upcoming project to take on the Stevens and Smith Historic Site,” she says.

LancasterHistory will soon begin developing as a museum the buildings at the corner of Queen and Vine streets, where U.S. Rep. Thaddeus Stevens and his housekeeper, local businesswoman Lydia Hamilton Smith, lived.

“The virtual (gala) program is being filmed in partnership with Aurora Films, and will feature a combination of live interviews, historic photos (and) contemporary images,” Sarratt says.

“We’ll talk about Lancaster County history and why history matters and how it’s in every part of our lives,” Sarratt says. “And then, we’ll try to take a contextual look at the strange experiences of 2020 but how common, in their own ways, they all are.

“We’ve been through pandemics and controversies and challenging presidential elections and similar experiences, historically, and (we’re) just trying to give everyone a little pep talk that we can get through this, too,” Sarratt says.

For those who’ve bought tickets to join the virtual gala, Sarratt says, after the program “we’ll we close it out with kind of a virtual dance party at home, where we’ll go through and look at about a decade’s worth of (gala) events over the years, with a big photo montage and video montage to have a little fun.”

Tickets to the fundraiser start at $50 per person; everyone will get a gift bag containing commemorative long-sleeved T-shirts and Wheatland chocolates from Miesse Candies.

“We started this event 17 years ago, really in an effort to broaden the historical society’s audience and base of support,” says Sarratt, adding it’s the organization’s biggest fundraiser of the year.

“We’re trying to make this as much fun as possible even though we can’t be together,” Sarratt says.

LancasterHistory also has begun its annual free spring speaker series — being held virtually this year instead of in the auditorium at the organization’s campus.

“In the past, the in-person lectures always filled up,” Sarratt says. With virtual speakers — who are now more accessible because they don’t have to travel across the country — there’s no limit on attendance.

“It’s a strange benefit to having this new experience and platform of doing these virtually,” she says. “We have members in all 50 states, and we’re experiencing attendance from people who would never be able to come to our lectures (in person) — people from North Carolina and California and somebody just chimed in from Oklahoma to buy tickets.

“We’re recording them all,” Saratt adds, “so it gives the opportunity for anyone who’s not available ... to just watch it at their leisure” from a link on LancasterHistory’s website.

The remaining speakers from now through May are:

• Journalist, author and Lancaster native Connor Towne O’Neill, speaking about his recent book “Down Along with that Devil’s Bones,” at 7 p.m. Thursday, Feb. 18.

O’Neill “really examines this issue of monuments and legacy and systemic racism,” Sarratt says. “It’s a topic we’re all looking at right now.”

Levine is a professor emeritus of history at the University of Illinois who has written five books on the Civil War.

Her 2018 book, “Birthright Citizens: A History of Race and Rights in Antebellum America,” tells of how Black activists fought for the rights of all citizens through battles in legislatures and courthouses.

The London-born Warner, 1865-1913, transformed Lancaster’s cityscape by designing such buildings as Lancaster Central Market, the Hamilton Club and old Millersville University library buildings, along with schools, churches and private mansions.

“For these remarkable people from across the country, to address the Lancaster County audience is pretty exciting,” Sarratt adds.

• President’s Day virtual tours of Wheatland are at 10 a.m. and 1 p.m. Monday, Feb. 15. Tickets are $15 and may be purchased online at  lanc.news/BuchananTix.

• The Valentine’s Stay-at-Home is being held virtually at 7 p.m. Saturday, Feb. 13. Tickets, $50 and up, can be purchased on the website at lanc.news/StayatHomeGala. Gift boxes can be picked up from 10 a.m. to 4 p.m. the day of the event, at LancasterHistory, 230 N. President Ave.

• The spring speakers series takes place Feb. 18, March 18, April 15 and May 11.  These Zoom programs are free to the public, but you must register by visiting lancasterhistory.org/events.

Fasnacht Day 2021: When does Lancaster County celebrate its doughnut-themed holiday?

Fasnacht Day, known to Lancaster County as the day to eat indulgent, pillowy doughnuts, will…

Want Girl Scout Cookies but don't know a Girl Scout? Here's how to find a troop selling cookies near you

Girl Scout Cookie season is underway, and Girl Scouts in the Heart of Pennsylvania is offeri…

Want to be a blood donor? Here's where Lancaster General Health's upcoming blood drives in Lancaster County are

Lancaster General Health has announced a series of community blood drives this month.

Valentine’s Day falls on Feb. 14 and honors the Christian martyr, St. Valentine, who was per…

After a year of being closed down because of the COVID-19 pandemic, Gretna Theatre is kickin…

Three Pennsylvania dogs will be part of Puppy Bowl XVII.

Who doesn't love to indulge in some sweet treats in the morning? Even if it is bitterly cold out.

Sight & Sound to broadcast live performance of 'Jesus' on Easter

After a successful live broadcast on Labor Day, Sight & Sound Theatres is coming back with another live performance in time for Easter.

Break out your record players - Music for Everyone is dropping singles beginning in April.

Antique toolbox: Do you know what this tool from Landis Valley was used for?

Can you guess what this tool, from the collection of the Landis Valley Museum, was used for?

Editor's Note: This story has been updated to correct the hours of operation of Ephrata Cloister.