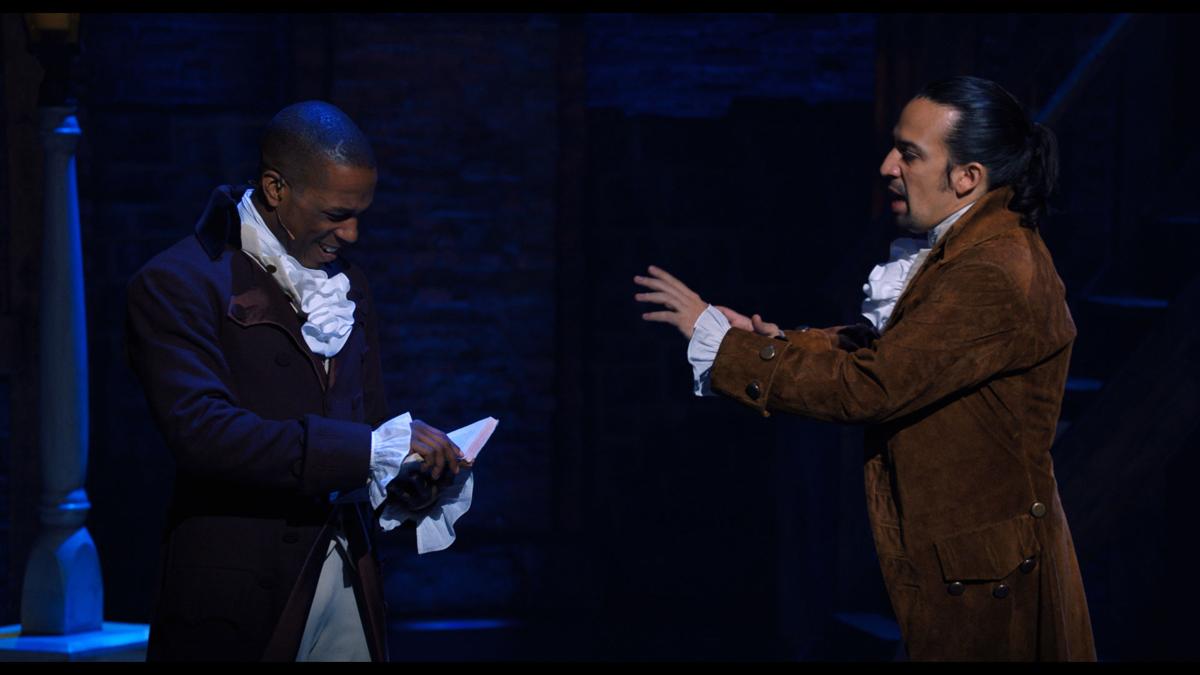 From left, Leslie Odom Jr. is Aaron Burr and Lin-Manuel Miranda is Alexander Hamilton in the film version of the Broadway musical "Hamilton." 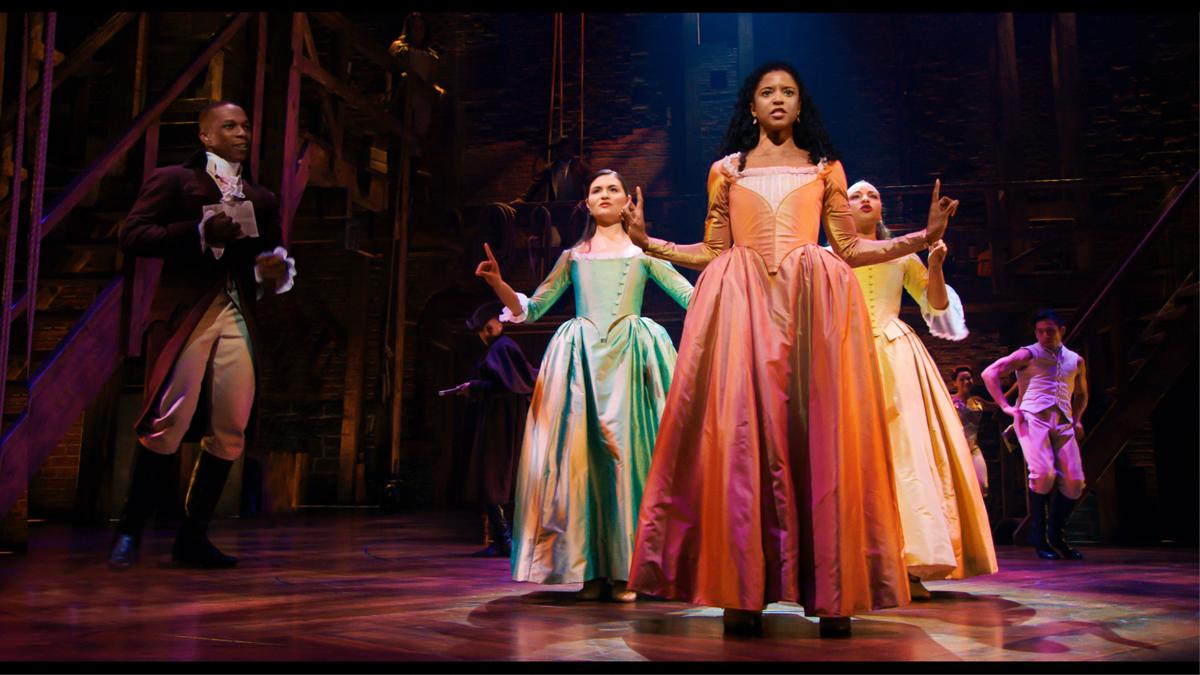 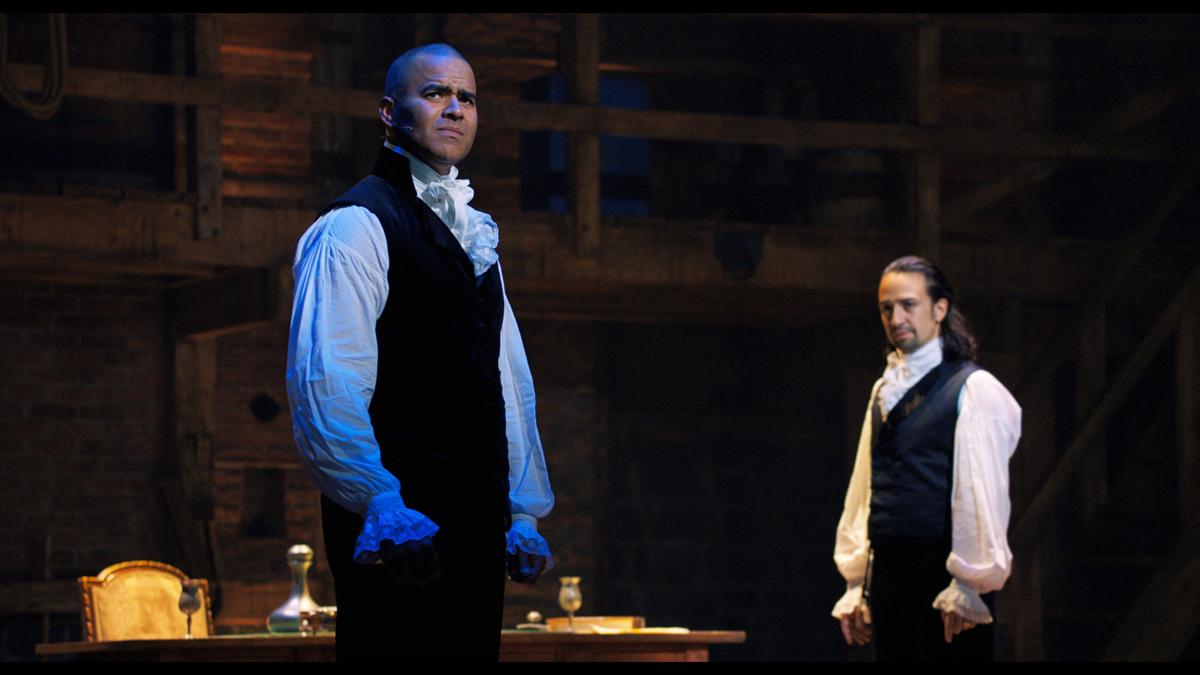 From left, Christopher Jackson is George Washington and Lin-Manuel Miranda is Alexander Hamilton in the film version of the stage musical "Hamilton."

But for a $6.99-a-month subscription to the Disney+ streaming channel, you can make your own living room "the room where it happens," and watch the show from your couch this Independence Day weekend.

A filmed version of "Hamilton," the award-winning hip-hop musical that tells the story of the rise, fall and legacy of one of America's founding fathers and the nation's first treasury secretary, will air starting very early Friday morning, July 3, on the streaming channel.

The musical, for which Lancaster County native Jonathan Groff received a Tony Award nomination for his role as King George III, airs starting at 3 a.m. Friday on the East Coast.

In recent tweets about the show, the show's creator and star Lin-Manuel Miranda has said Disney+ subscribers can watch the show as many times as they'd like.

The streaming service hasn't announced how long the film will remain available on the platform.

@HamiltonMusical on Twitter will host a "Twitter watch party" at 7 p.m. Eastern time on Friday, during which fans are encouraged to watch the show on Disney+ while tweeting along using the hashtag #Hamilton.

This version of "Hamilton," the rights for which Disney paid $75 million, was supposed to premiere in movie theaters in October. The COVID-19 pandemic and the shutdown of theaters changed those plans.

The "Hamilton" movie was filmed over the course of three days during the summer of 2016, just before several of the original cast members began leaving the show.

Groff had already left the cast at that time, but came back to perform in the film version of the show.

The "Hamilton" film is rated PG-13, and contains some adult themes, gun violence and handful of curse words — a couple of which Miranda has said he allowed to be bleeped so the film wouldn't get an "R" rating.

The running time is 161 minutes — more than 2 1/2 hours. It's directed by Thomas Kail, who won one of the show's 11 Tony Awards for directing the stage show.

There will be an intermission during the movie, featuring a countdown clock so you know when to be back on the couch with your snacks for the second act.

If you're not a Disney+ subscriber, you can check out price packages and sign up for the streaming service online.

You can subscribe for $6.99 a month or $69.99 a year. The Disney+ site says you can then cancel the service at the end of any billing period.

In addition to Disney movies, TV shows and other content, Disney+ offers original programming, such as the show "Encore!," which reunites casts of high school musicals to recreate their stage shows decades later.

In addition to his role in "Hamilton," Groff can be seen on Disney+ in "Into the Unknown: The Making of 'Frozen 2,'" a behind-the-scenes documentary series about the making of the sequel to the popular Disney animated film. Groff voices Kristoff the mountain man in the franchise.

The musical "Hamilton" opened on Broadway in 2015. It has since been performed in several other cities, including Philadelphia, London and Chicago.

It's unknown when the stage musical will reopen; Broadway theaters are closed until at least January because of the COVID-19 pandemic.

Lancaster County and neighboring counties have entered the state’s “green” phase, and recreational and cultural establishments have begun reopening.

Some Lancaster County movie theaters will be reopening their doors this Friday after being closed for months because of COVID-19.