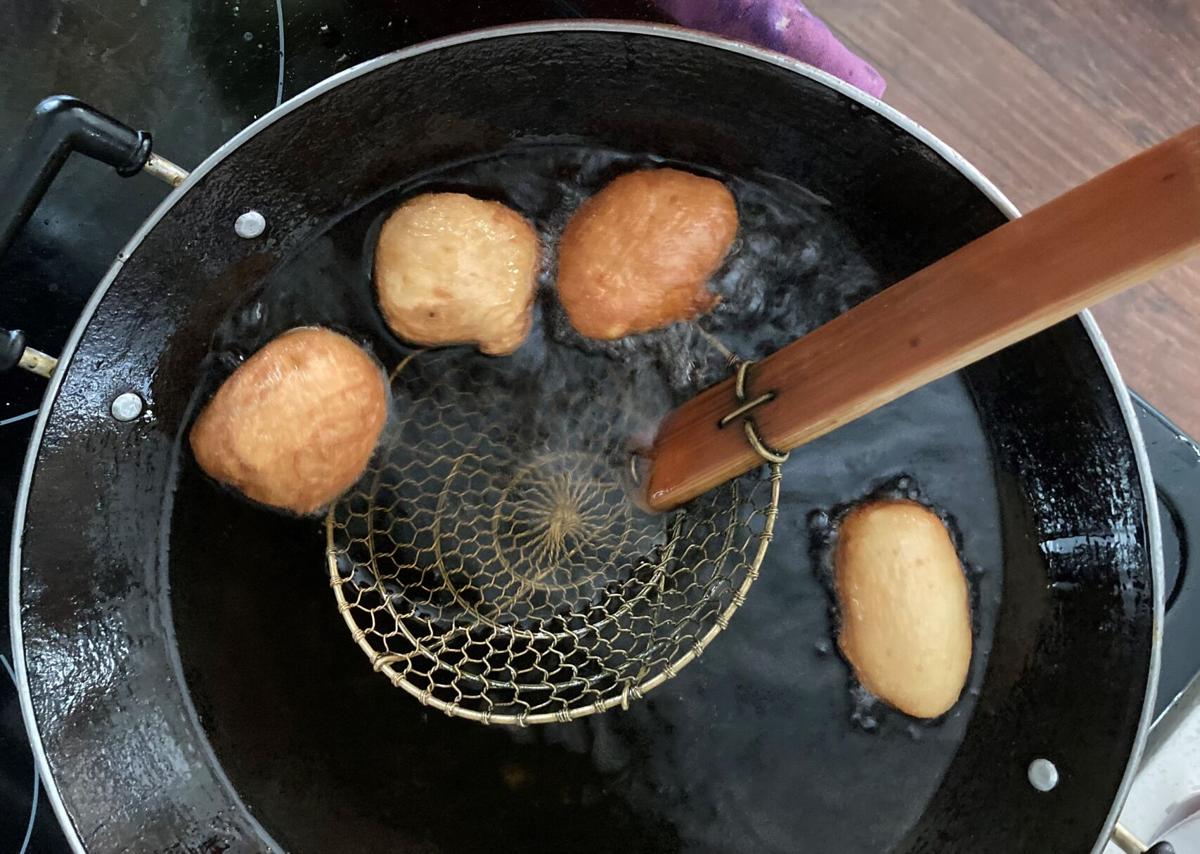 Use a slotted spoon or spider sieve (pictured) to lift fasnachts out of the hot oil when they are golden brown. 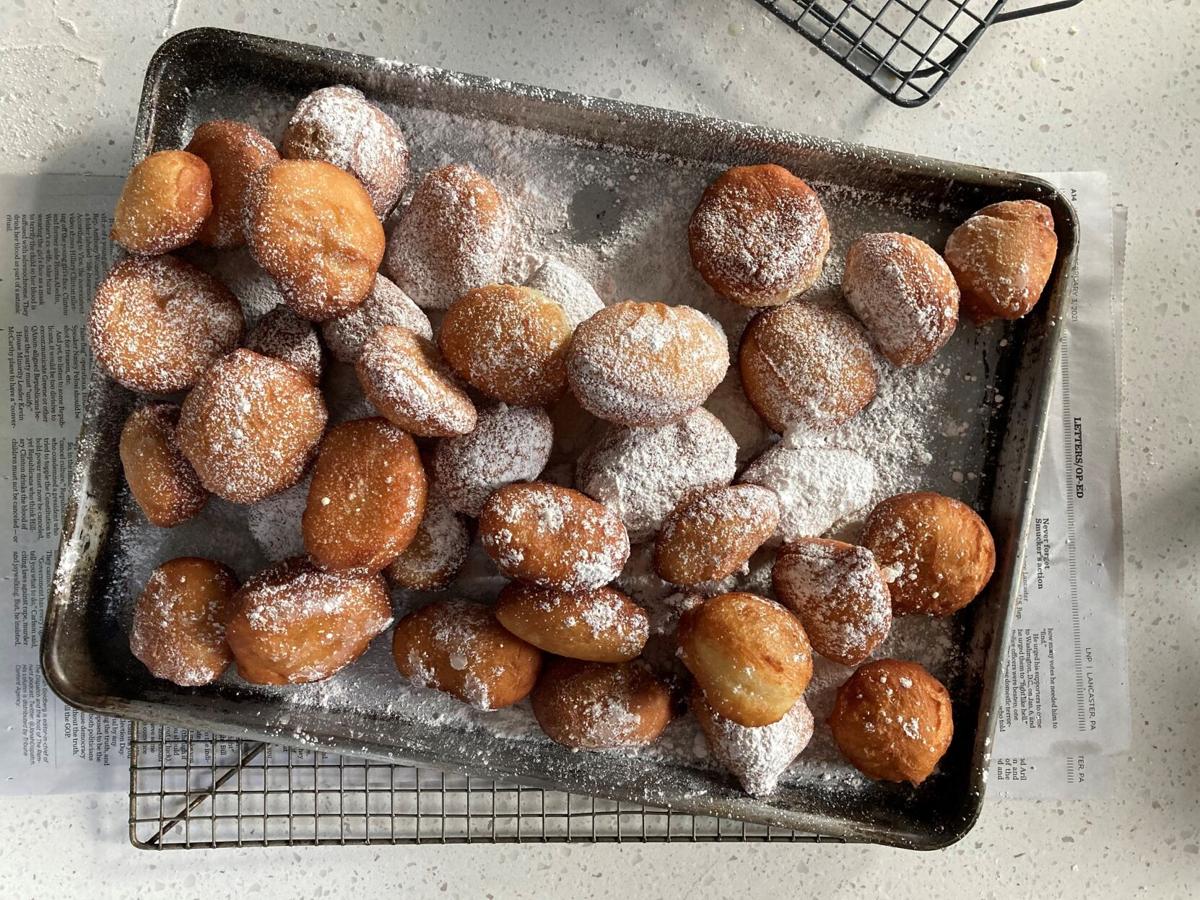 Making fasnachts at home is a project but not difficult, especially with a few kitchen helpers.

Last year, I took my maiden voyage on the fasnacht trail under the tutelage of LNP|LancasterOnline features reporter Erin Negley, sampling fasnachts throughout the county.

Although great fun, my adventure felt more like an introduction, not a deep dive. In preparation for this year’s Fasnacht Day on Tuesday, I turned to you, for your only-in-Lancaster stories of Fasnacht Days gone by.

Take Cathy Yeaglin Baughman, of Manheim Township. As a student at Holy Trinity Catholic School in Columbia (Class of 1961), she remembers bringing “a potato or egg to school to be used for fasnacht making.” The church, with a long tradition of making (versus outsourcing) fasnachts, has been a perennial Shrove Day favorite pick-up spot. (However, due to COVID-19, this year’s event has been canceled.)

“If we did [bring a potato or egg],” Baughman explains in an email, “we got a free fasnacht.”

“I remember my mother leaving at 6 a.m. to go to Holy Trinity to make fasnachts and coming home by bus in the afternoon,” Baughman says. “I remember coming home from school and seeing her coat hanging outside to remove the smell of fasnachts.”

Speaking of smells, you took me to the kitchen, where I always feel at home.

Cyntra Thompson of Lititz remembers her grandmother, Anna Mohler, who enchanted the family with homemade fasnachts from her kitchen in Ephrata. Now that Thompson is roughly the same age as her grandmother during those Fasnacht Days of yore, she appreciates the labor of love with new perspective.

“On a Saturday close to Shrove Tuesday, our small family gathered at Grandma’s kitchen table to savor a spread of sandwich fixins, chips, cheese, pretzels, and the star of the day: that humble, plain, doughy mass called Fastnacht,” Thompson wrote, choosing one of the pastry’s alternate spellings. “No sprinkles, cream filling, or sugar adorned this once-a-year grandma specialty. The only necessary addition required was a slather of that sweet, sticky spread of King’s syrup. I distinctly remember that large red metal can with its lion logo holding a prominent place in my grandma’s fridge. Smaller serving dishes of that syrup stood strategically by hungry relatives.

“The dough was either cut into rounds minus the highly prized center hole that the grandkids loved, or into rectangular shapes that we called ‘pocketbooks.’ We cousins enjoyed it all with lots of food, fun and play.

“When I was a bit older and more curious about the preparation, I spent a Saturday watching Grandma engineer this culinary feat. It involved yeast, flour, shortening, warmth to create bubbles, addition of more ingredients, rising time, rolling dough, cut, cover for more rising, and finally cook in hot fat, drain, and eat.

“My grandmother died when I was a college freshman. Despite trying numerous bakery, congregation, or homemade fastnachts, I have never found any that could compare to Grandma’s.”

Lastly, you inspired me to make my own fasnachts with a passed down, third-generation recipe. I have Maureen Herr, of Manheim Township, to thank for sharing her Grammy Kimmel’s recipe (which follows). Herr, who grew up in Ashland, in Schuylkill County, took us to the kitchen of her youth:

“As young teenagers, my brother Bill and I loved when Grammy came to visit for a while with our family. She knew we enjoyed baking with her and always asked what treat we would like. If the visit was before Ash Wednesday, we would, of course, ask for homemade fastnachts.

“We’d gather the ingredients. Sometimes that meant buying yeast and flour, but within an hour or two, Grammy had the dough made and rising in our warm kitchen. My brother and I cut the fastnachts and after waiting for the dough to rise, we were allowed to fry them. Our kitchen smelled heavenly.

“The taste of very warm, just-fried samples is still a great memory. After a few tastes, we fried the remainder and decided what coatings to use: plain, powdered sugar or granulated sugar. Grammy made us part of the experience which we will never forget.”

So I channeled Grammy Kimmel and spent part of an afternoon last week making her fasnachts. In doing so, you helped this outsider to better understand what the big deal is, on why it’s not a doughnut but a singularly unique article, which as one Elizabethtown reader tells me “has a chewiness that you can’t describe,” thanks to both a mashed potato and potato cooking water that activates the yeast.

I think my new reader friend in Elizabethtown, who asked not to be named, would approve. And I think, if you’ve ever had an old-school fasnacht, you will, too.

Writes Maureen: “This recipe was my mother's (Leona Thomas) and came from her mother (Grammy Kimmel) from Schuylkill Co., Ashland, Pa.”

Recipe has been tested by Kim O’Donnel and edited for clarity. Testing notes are in italics.

1. Place the chopped potato in a medium saucepan and cover with water by a few inches, about 3 cups. Bring to a boil and cook until fork tender, about 10 minutes.

2. Reserve 1 1/2 cups of the potato water and drain the potatoes.

3. With a fork or potato masher, mash the cooked potato pieces until soft and pliable.

4. Let the potato water cool; you are looking for a temperature between 100 F and 110 F. Add the yeast, stirring with a fork until dissolved. Cover with dish towel until slightly foamy, 5 to 10 minutes. This helps to activate the yeast.

Because you will be adding flour incrementally, this lets you see how readily the dough absorbs the flour, based on the humidity and temperature of your kitchen. You may not use the total amount; I ended up using about 1/2 cup while kneading.

6. Pour the yeast mixture into a large bowl or in the bowl of a stand mixer. Add 1 cup of the flour and mix until it just comes together; what you’re doing is hydrating the flour. Add the sugar, egg, butter, mashed potato and 1 more cup of the flour, mixing until just combined. Add the salt and 2 more cups of the flour (but in gradual, 1-cup increments).

Keep in mind this is a “big dough,” meaning there's a lot to work with and it will take some elbow grease to knead. (Whatever you do, don’t use a hand-held electric beater; it will quickly surrender.) I used a stand mixer with a paddle to bring dough together, then dumped onto the counter to knead by hand. Stand mixer owners: You could also switch from paddle to dough hook to finish the job.

7. Mix until the dough clears the sides of the bowl. Knead with a dough hook attachment or, if by hand, dump onto a work surface. Knead until the dough is soft and springy and the butter is no longer visible, 3 to 5 minutes.

8. Place the dough in a lightly greased bowl and cover with a tea towel and let rise until doubled in a warm draft-free spot, about 2 hours.

9. Dust your work surface with flour and place the dough on top. Dust the top and roll the dough until it is about 1/2-inch thick. Cut with a round biscuit cutter. I used a 2 1/2 -inch cutter which produced small/medium fasnachts. For larger fasnachts, use a 3 1/2- or 4-inch cutter.

10. Place the dough circles on sheet pans, a few inches apart. Cover with a towel or plastic and let rise for 1 hour; you will notice them getting puffy.

Meanwhile, you can prep your frying station. Line work surface with newspaper or paper towels, then top with a rack. Locate a slotted spoon or spider sieve, plus a sifter for powdered sugar.

12. Lift out of the oil with a slotted spoon and transfer to rack to drain.

I transferred drained fasnachts to a big tray and sifted powdered sugar on top.

Eat as is or with powdered sugar.

How to cook a steak in a cast-iron skillet for Valentine's Day, plus other recipes

The pandemic has me doing a lot of sitting — at my work-from-home desk, but also on my medit…

Fasnacht Day 2021: When does Lancaster County celebrate its doughnut-themed holiday?

Fasnacht Day, known to Lancaster County as the day to eat indulgent, pillowy doughnuts, will…

From sauerkraut to filet mignon, US presidents have had food favorites [recipes, fun facts]

James Buchanan liked sauerkraut. George W. Bush likes filet mignon. Ahead of Presidents Day, find out what some of our chief executives have liked on their plates.

Like figure skating, comics are a mix of skill and artistry [Unscripted column]

My 14-year-old daughter is a figure skater. She also grew up reading old newspaper cartoons: “Calvin and Hobbes,” “Peanuts” (we don’t have TV,…

Snow shoveling isn’t fun, but it’s often unavoidable, and for seniors and individuals with disabilities who can’t clear the snow for themselve…

Want to be happy at work? Find a job you can pour your heart into [column]

Hannah Linde grew up just miles from Solanco Neighborhood Ministries but didn’t know anything about it until she went looking for an internship.

How much do fasnachts weigh? Let's find out [video]

LancasterOnline wanted to see just how much fasnachts weigh. Think about a half dozen of them in a box; those little fried dough orbs can have…