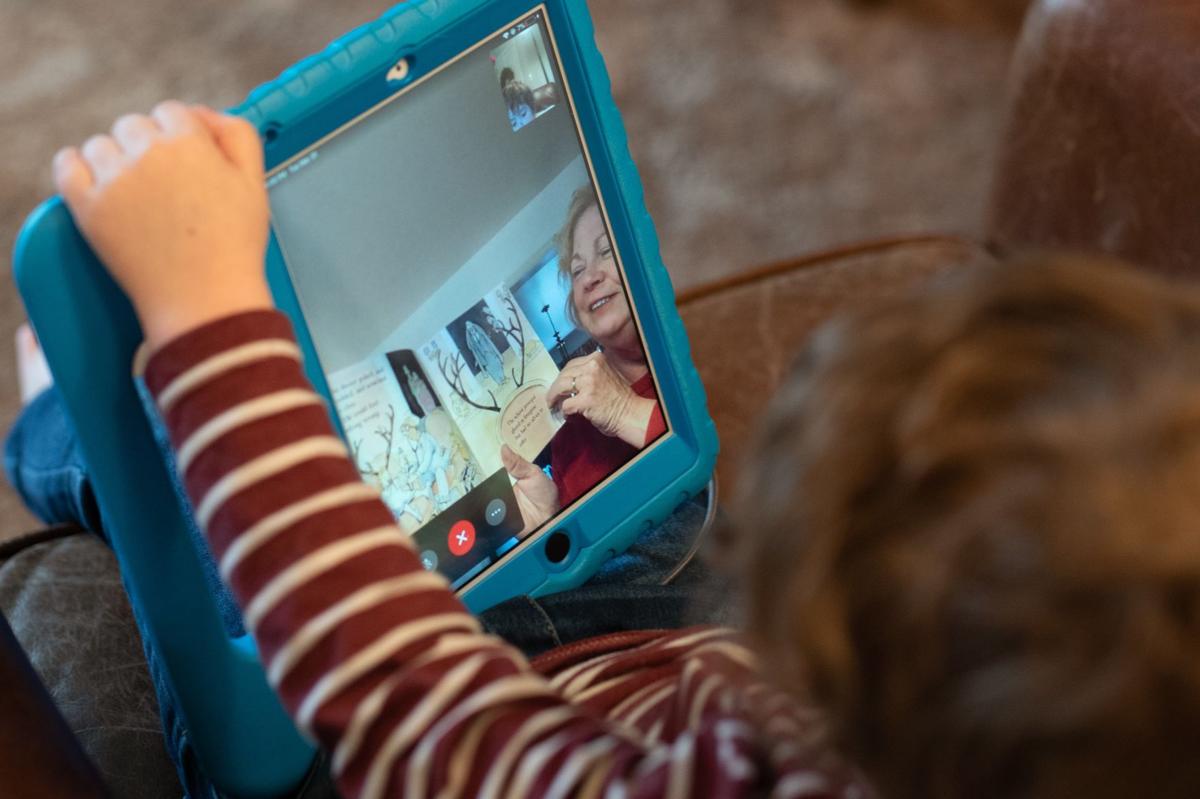 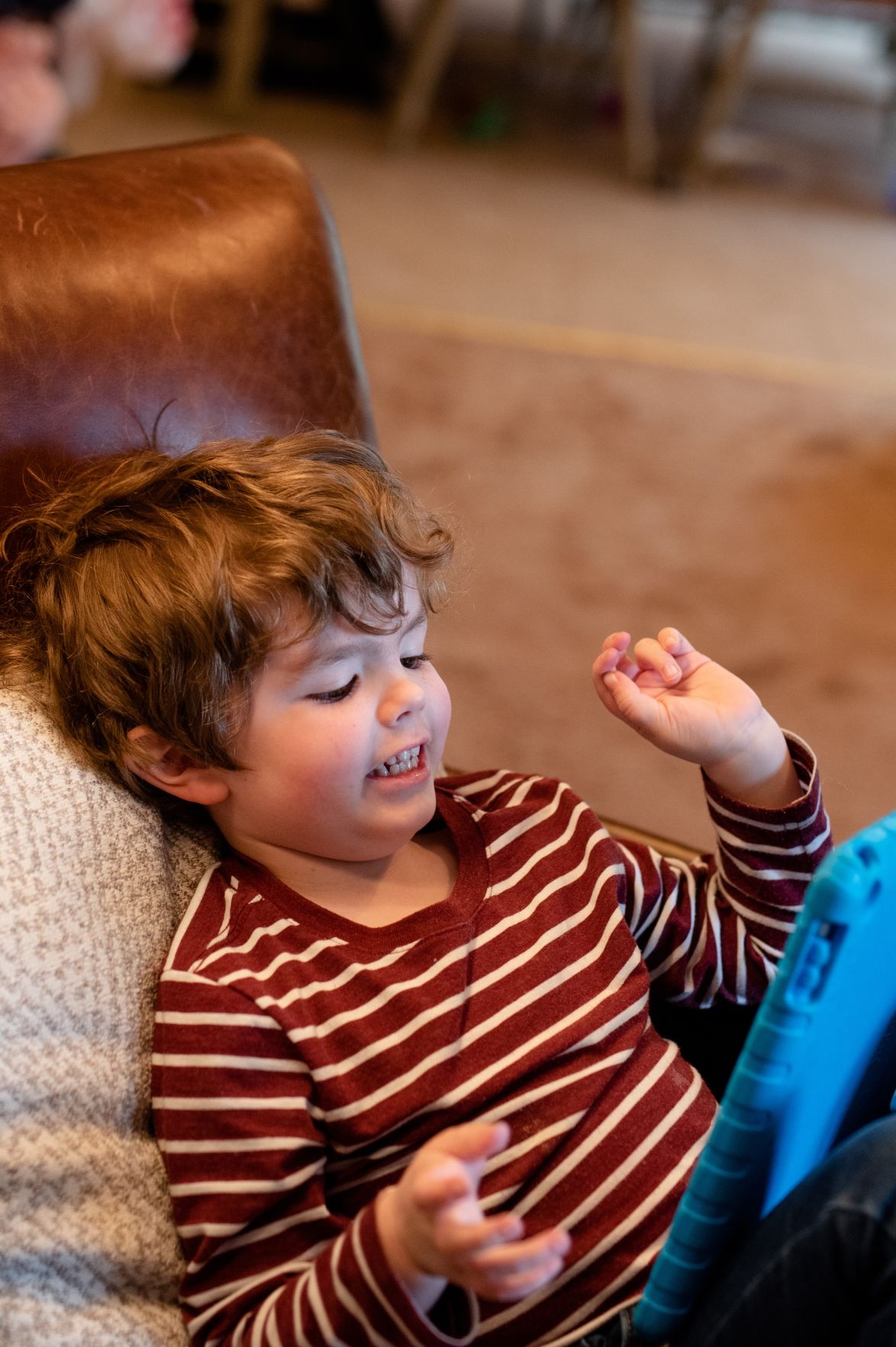 Wyatt MacDonald talks to his grandmother Pat Walsh on FaceTime. Walsh talks to her grandchildren about three times a day on the video chat app. 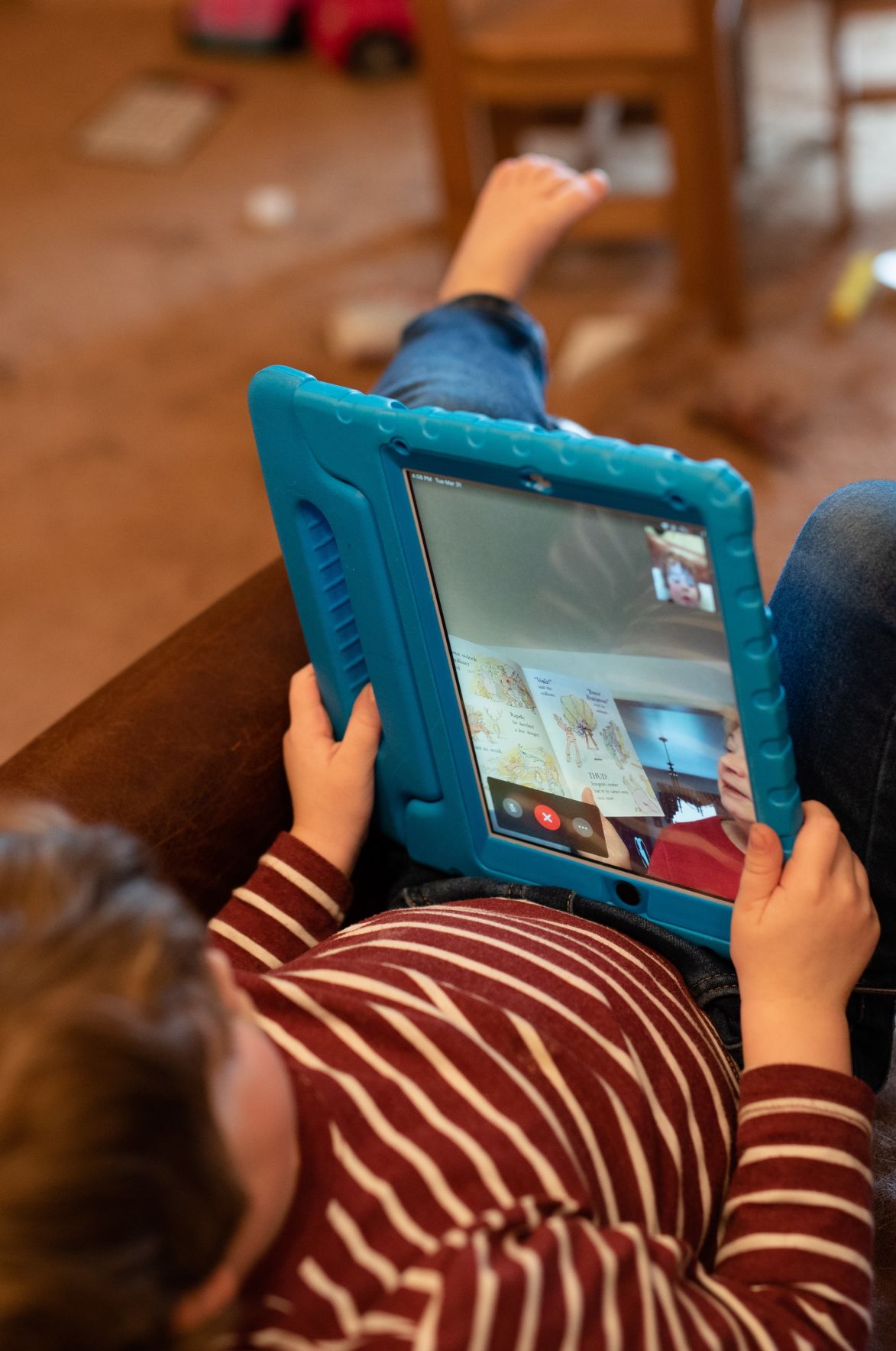 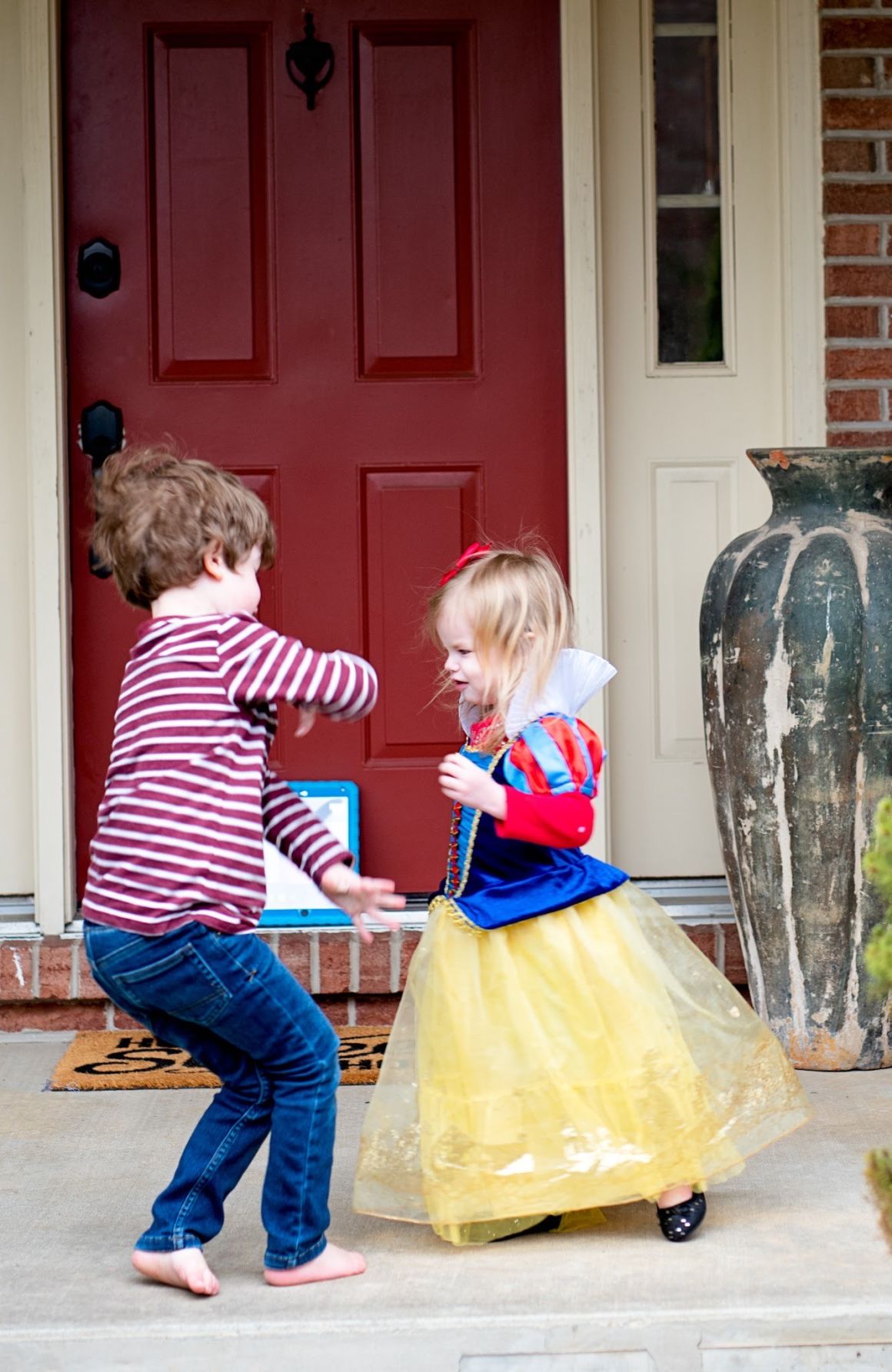 Wyatt and Hadley MacDonald dance to their grandmother's piano playing over FaceTime.

It’s cliche to say that kids grow up fast. The thing is cliches are cliches because they are usually true. From first steps, to first words, to first days of school to graduations — the milestones seem to pass by in a flash.

Sadly, due to the COVID-19 pandemic, many grandparents find themselves separated from their grandchildren and unable to be there in person for some of their grandchildren’s biggest moments. And sometimes it’s not even about missing the big moments, but the everyday moments, such as picking kids up from school or reading a story to them, that make it so hard to be separated.

Global efforts to flatten the curve and slow the spread of the coronavirus have caused people to remain at home as much as possible. This is especially important for at-risk groups such as those with compromised immune systems and older people.

These days, with more parents working full-time, grandparents often help with child care and during this enforced stay-at-home period, they are suffering not only from being unable see their grandchildren, but from being unable to help their own children during this particularly stressful time.

“Thank god for FaceTime,” says Carol Simpson, of Lititz. Simpson says she talks to her twin 6-year-old granddaughters every couple of days through the video chat app.

Under normal circumstances, Simpson and her husband would pick their granddaughters from school on Mondays and Fridays and attend soccer games or swim lessons.

“You have a lot of time for reflection and thinking about what you really miss,” says Simpson, a retired health care professional. “Six-year-olds grow and change so fast, and we're missing all of it. In that sense it’s a killer to have no contact with them.”

Simpson says she is sad that her granddaughters’ 7th birthday party and the big family Easter dinner will have to be canceled. Still she searches for some semblance of normalcy wherever she can find it. She’s planning on doing some half-hour long FaceTime calls so she can continue reading “The Chronicles of Narnia” series to her granddaughters.

“We’re halfway through the first one,” Simpson says. “I think that would be great for all of us.”

It’s not only the fun moments with her grandchildren that Simpson misses. It’s being there to out help with child care.

'The Tiger King and I,' a bonus episode of 'Tiger King' debuts Sunday; here's how to watch it with your friends

“It’s painful to be sitting here a couple miles away and not be able to help,” Simpson says.

Grandparents across the county share Simpson’s sentiments. They’re feeling thankful to be able to reach out and stay connected via video chat apps and phone calls, but sad that they can’t physically be there with their grandchildren.

Michael Zell and his wife, Anne, retired school teachers from Manheim Township, miss their twin 16-month old grandchildren Zoe and Logan, who they used to babysit two or three times a week.

“We feel fortunate,” says Zell, who says they regularly chat with their family via the video chat app Zoom. “But sad we can’t see them in person and hold them and hug them.”

Since the social distancing measures have been implemented, the Zells have been limited in the ways they can interact with their young grandchildren, who are just learning to walk and talk.

“They’re just starting to talk,” Zell says “We’re missing that part of their life, and that’s something that we certainly feel badly about. But being in the times of our lives where we are, they’re able to do it through the computer.”

The family began by using FaceTime on the phone but now prefer Zoom on the computer, not least because Logan used to like to walk away with the phone. Sometimes the Zells just turn on the app and just watch Zoe and Logan play and other times they have chats that include the whole family.

“Zoom has worked really nicely for us,” Zell says. “We have half-hour family chats with children and grandchildren.

“We can see everyone at the same time. It’s like we’re the Brady Bunch,” Zell says, referencing the television show’s title sequence. Zoom calls with multiple users arrange the video streams in a similar grid.

Pat Walsh, who lives in the Meadia Heights neighborhood of Lancaster, also watched her grandchildren Wyatt and Hadley a few times a week. And even though her grandchildren live relatively nearby, she hasn’t seen them since the stay-at-home mandates were issued.

Instead, the former first-grade teacher has taken to hanging out with her grandchildren on FaceTime.

But Walsh doesn’t just talk to her grandchildren over FaceTime. She reads stories, plays a version of hide-and-seek with the phone and occasionally puts on concerts.

Walsh’s daughter props the iPad against the front door and the kids dance on the lawn. Sometimes she’ll just watch them ride their bikes over FaceTime. Other times she'll take her phone up to her library and turn the camera toward her books and let the children pick a few stories and she'll read to them.

“I like to let them pick,” Walsh says. “It makes it more interactive.”

One thing she misses is playing games. Wyatt, she says, plays a version of hide-and-go-seek with the phone, but it doesn’t really work. She laughs.

“We haven’t figured out how to play Go Fish on the phone,” Walsh says.

For Walsh it these moments that get her through the day — and help her forget about all the news.

“It’s a difficult time for everybody, but kids always make you happier,” Walsh says. “It certainly brightens our day. I always FaceTime them right away at like 9 o’clock in the morning. I don’t know what we’d do without it.”

At United Way of Lancaster County, our first priority is to lift up our community’s families and most vulnerable populations.

She always wanted to be a nurse.

Editor's note: This article will be updated throughout the day with the latest information on COVID-19.

From Peeps to a mini Rockefeller Center: 7 weekend reads to catch up on today

Here's what you may have missed this weekend.

Gov. Tom Wolf will host a news conference about ongoing efforts to mitigate COVID-19 in Pennsylvania.

Can you even begin to imagine what it’s like to drown? To gasp for breath and not be able to fill your lungs with life-giving oxygen. And on t…

'A band of bad brothers': The Naval Academy Class of 1952 reunites at Willow Valley

Members of the Naval Academy class of 1952 share stories of their time in the service.

Unscripted: The simple gift of genius brings together music and nature in art [column]

My wife is a bread-baker. She had a stand outside the old Eastern Market when that started up again. She would tell me about one of her custom…

For these jigsaw enthusiasts, it's no puzzle how to pass the time while sheltering at home

You’re stuck at home, sheltering in place, with time on your hands.

McCaskey junior, Georgia Cox, has created the McCaskey Seniors of COVID-19 project to document the class of 2020.

The monarch, which undergoes drastic transformation, remains a symbol of hope.

After ministering for 31 years at St. Luke’s United Church of Christ in Lititz, organist retires

Karen Umberger on her lifelong devotion to faith and music.

The 3.2 million dollar auction brought in a few record-setting prices.

'I really miss hugging': How grandparents are staying connected and safe this holiday season

With a higher risk of bad outcomes due to COVID-19, grandparents are looking at alternative ways to celebrate the holidays.