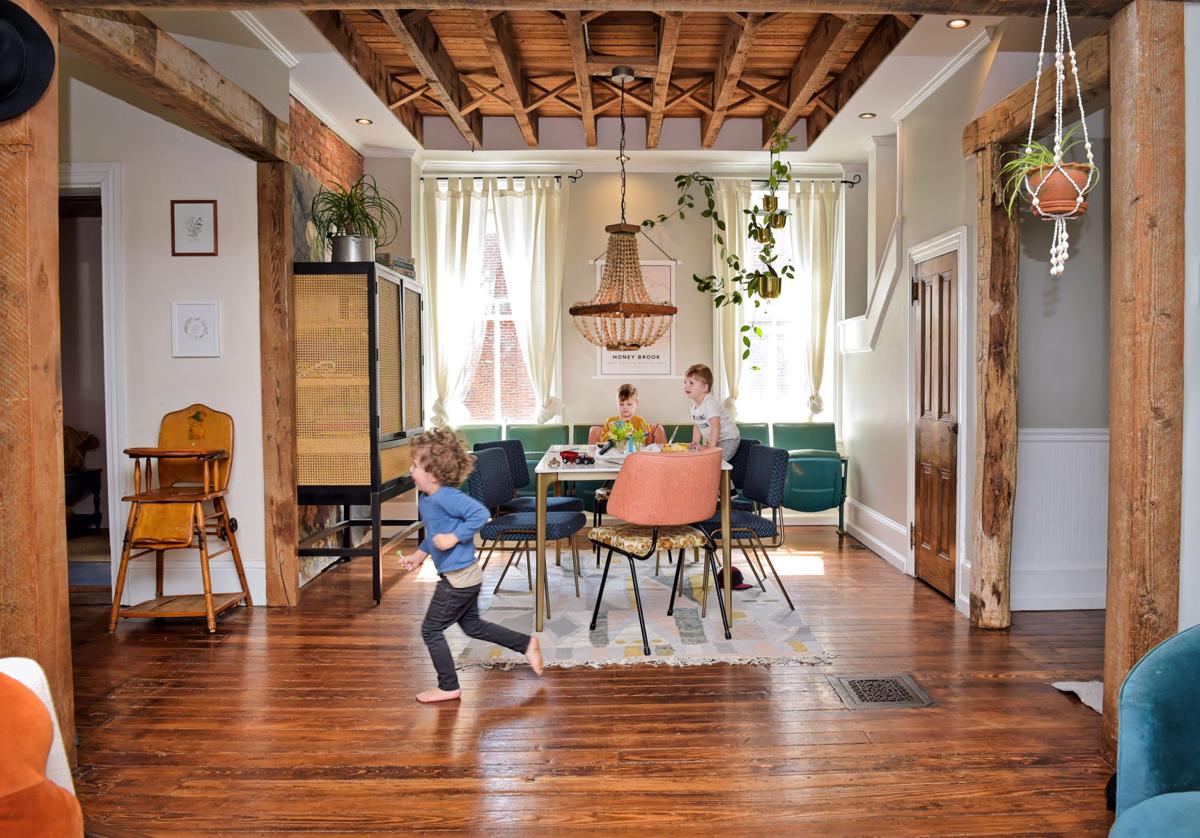 Creed, left, Canon and Cruz Beiler, sons of Chris and Claudia Beiler, play in the dining room of the family’s Honey Brook home. 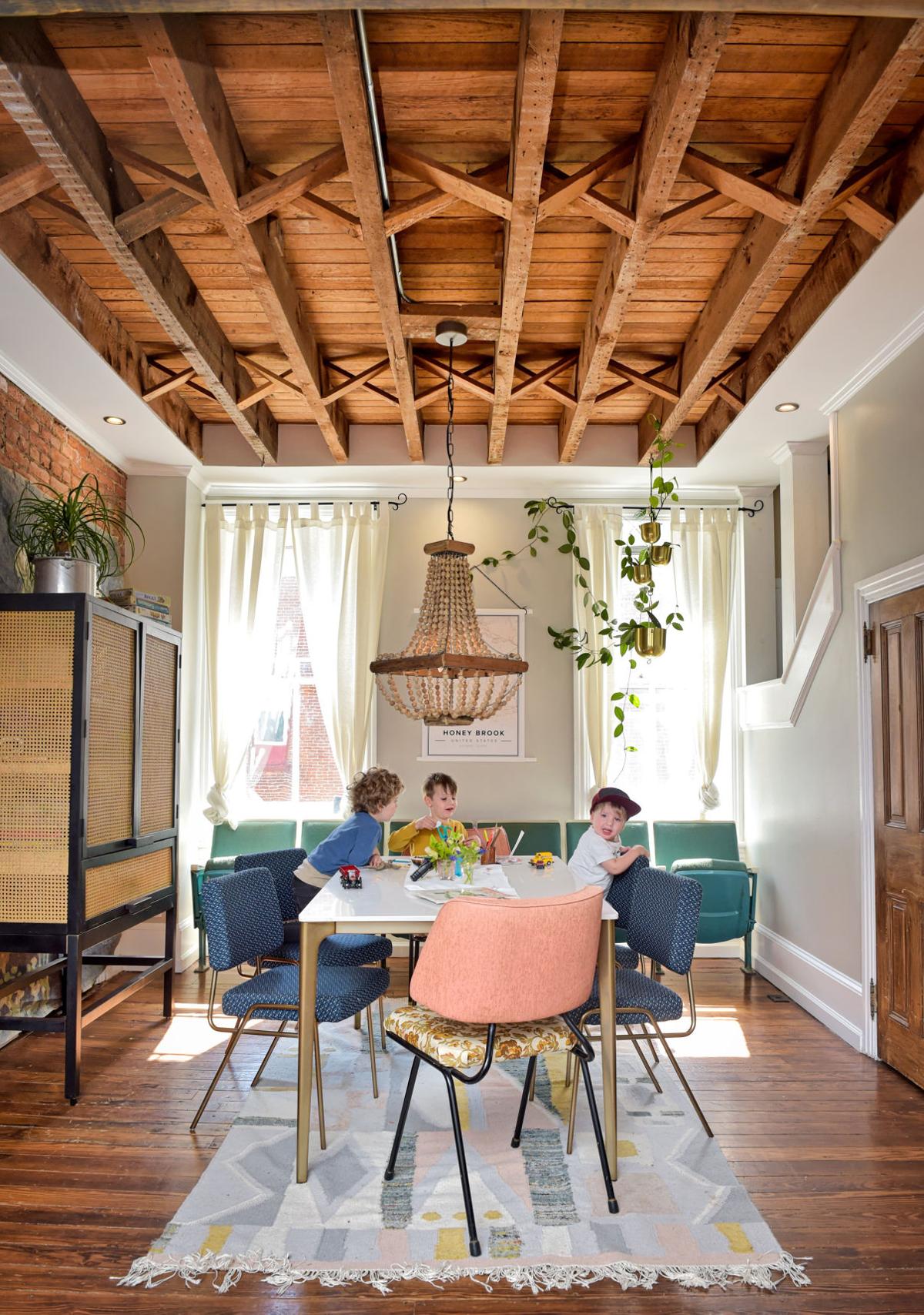 One of the Beilers' favorite features in their dining room is the exposed ceiling. 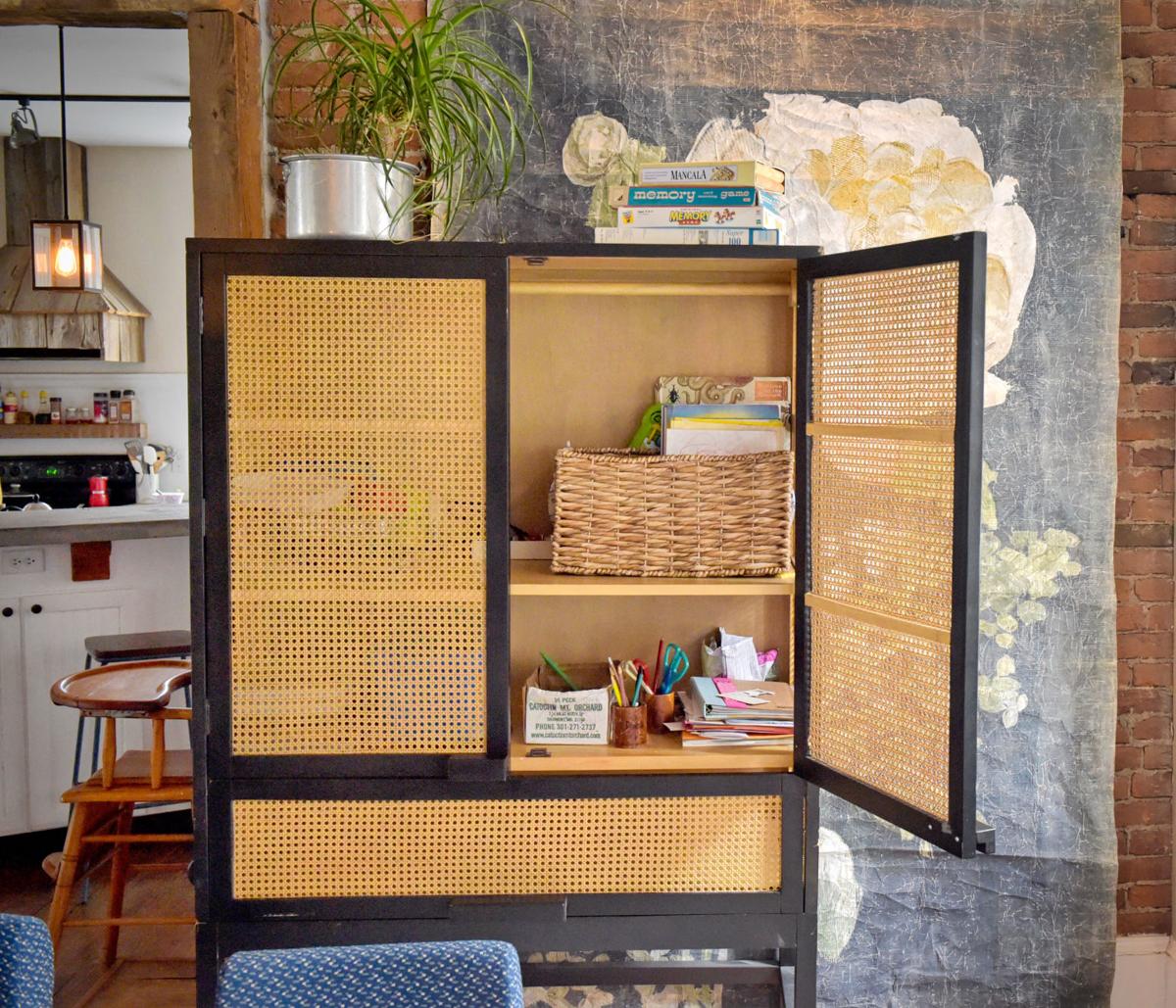 The Beiler family uses this woven wood cabinet for storage of homeschooling materials for son Canon, 5. Claudia removed plaster to expose the brick wall behind and hung a tapestry to cover an unused door. 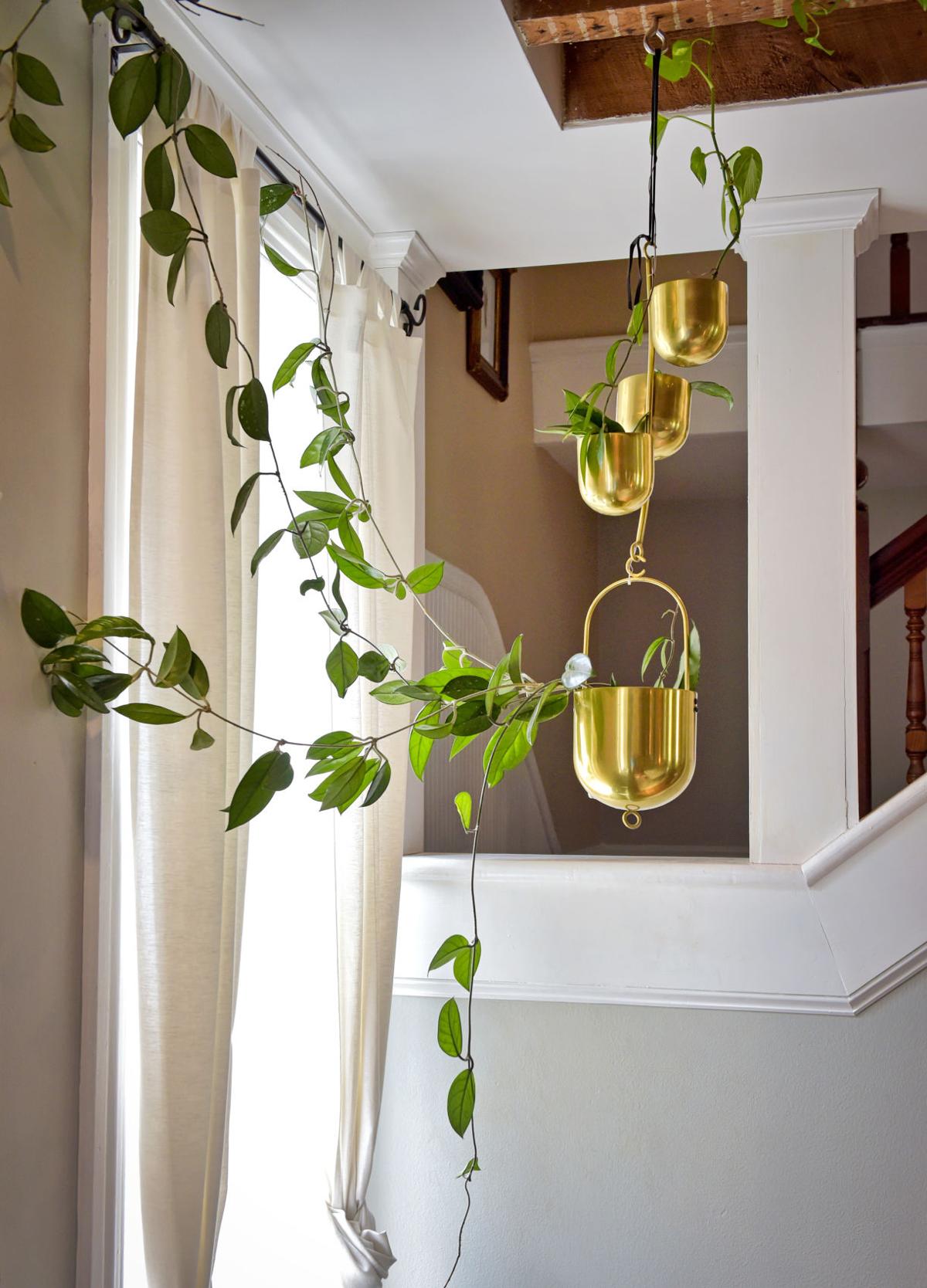 Chris and Claudia Beiler love to incorporate plants in their decor, including this hanging wax plant in their dining room.

Creed, left, Canon and Cruz Beiler, sons of Chris and Claudia Beiler, play in the dining room of the family’s Honey Brook home.

Chris and Claudia Beiler love to incorporate plants in their decor, including this hanging wax plant in their dining room.

Ever wonder how home design experts craft their own special spaces? In this occasional series, we ask design experts about a favorite room in their home and how it all came together.

Chris and Claudia Beiler are known for renovating homes in Lancaster city, often with a mid-century modern flair and always with an eye toward reflecting the people who will live in them.

But designing creative spaces wasn’t a lifelong dream for the Honey Brook couple. In fact, it wasn’t even on their radar until after they started renovating their own 19th-century home.

Chris bought the 1870 brick house along Horseshoe Pike before they were married and lived there with friends. At the time, he had a career in solar design and Claudia was a bus driver.

When they got engaged, Claudia made it clear: She didn’t want to live in a big house. So they decided to rent the downstairs and, with help from family and friends, they renovated the attic into their own little living space for two, incorporating a lot of the home’s old wood. It was finished just in time for their wedding in 2013.

“It was an unexpected space,” Claudia says. “Here’s unusable space that we turned into livable space.”

That livable space turned out so cute, in fact, that others started asking the Beilers for renovation help. When they listed it on Airbnb, Urban Outfitters took notice and asked to do a photo shoot.

“I think that’s what started us in a lot of ways,” Chris says.

In 2015, the Beilers quit their jobs and started The Chris and Claude Co. They also started their family, which now includes Canon, 5, Creed, 3, and Cruz, 1.

“I was like, maybe I do want a big house after all,” Claudia recalls.

They’ve outgrown the attic, but they haven’t outgrown the house. As they design creative spaces for others, they continue to lovingly renovate their own home to create a space that reflects who they are.

“We wanted a place we can live and work and raise our kids, a place that’s peaceful and restful,” Claudia says. “No home should be cookie-cutter.”

Their favorite room: The dining room

Before Chris and Claudia could design their dining room, they had to create it. They knew they wanted an open concept on the first floor, but what they had was the exact opposite.

That includes the space that would eventually become the dining room. Part of the area was a bathroom with one 6-foot-plus window covered in translucent glass. A strange little hallway ran in front of the bathroom and around its side, leading to nowhere but a second, identical window.

The Beilers removed the bathroom and started knocking down walls to create an open, almost triangular living area that includes the dining room, family room and kitchen. Although modern in concept, it retains the home’s 1800s character and charm, thanks in part to some architectural touches.

They framed the wide entryways between rooms with a mix of hand-hewn and sawn beams that some friends salvaged from an old barn. And in her ninth month of pregnancy, Claudia decided to remove the plaster wall on one side of the dining room to expose the original brick beneath.

“She went at it with the little air chisel,” Chris says.

They also removed the plaster ceiling to reveal the beautiful, intricate pattern of the wood beams above. “The ceiling in here is my favorite,” Claudia says. The boys’ room, which they chose not to carpet, is directly above, and there is no insulation between the rooms, so the noise travels. “But aesthetically,” she says, “I love it every day.”

They also love those two tall windows that now flood the dining room with light. Over the years, previous owners had made numerous changes to the home, but fortunately they discarded very little. The Beilers found the original windows in the basement, which they used to replace that translucent bathroom glass. They also found and reinstalled the home’s original shutters.

Chris loves the wavy glass in the old panes, despite their drawbacks.

“When it’s really windy those curtains move,” he says. “But I’d rather pay a little extra for heat and have the style.”

Beyond the architectural features, part of what makes the dining room special is the personal stamp Claudia has put on the room. “This space feels so Claudia,” Chris says with a smile.

“I guess my style is like eclectic grandma,” she says. “I really love thrifting and sourcing things cheaply. If I get tired of them I don’t feel bad selling them and buying something different.”

Case in point: They are already on their fourth chandelier — a boho style made from wood beads. “I’m getting antsy for a new one,” Claudia says. “Unfortunately, yard sales are closed.”

Among her favorite brands: West Elm, Urban Outfitters and Anthropologie, although she only deals in discounts and second-hand items.

They’ve surrounded their dining table, a second-hand quartz-top find from Anthropologie, with a mismatched set of wire-framed mid-century-style chairs, some from West Elm and others discovered by friends at a thrift shop in New York.

For overflow seating when company arrives, they have a row of teal blue theater seats rescued from the old Point of View Cinema in Millersville.

The only other furniture in the room is a second-hand woven wood storage cabinet from Urban Outfitters that holds 5-year-old Canon’s homeschool supplies. “We don’t have any closets,” Claudia notes. “Incorporating that piece was a necessity.”

For the Beilers, the dining room is not just for meals. It’s for homeschooling and snacking and coloring from a large cardboard box filled with crayons and zooming little toy trucks across the table. And for all those reasons, it’s their favorite room.

“This is where life happens,” Chris says.

• Be thrifty: “Use thrifting, yard sales and auctions as your first option,” Claudia says. “The prices are insanely better.” You’ll be supporting local people and businesses, too. Numerous sites also allow you to set up email alerts when a particular item you’re searching for goes on sale. What’s the latest item Claudia has in her search box? “Velvet couch.”

• Plants: Greenery adds an extra level of beauty to any space, even the shower, Chris says. The Beilers have numerous plants in their dining room - a spider plant in a metal pot atop the storage cabinet, sprigs in little glass vases on the table, and wax plants that trail from a set of hanging brass planters to the window and the ceiling beams..

• Create a space that feels like you: “People see pictures on Pinterest and they want their style to be that,” Claudia says. “It’s not expressing who they are. Buy what you like instead of turning your home into the next fixer-upper.”

Many college students across the country find themselves disappointed this spring, as the plays and musicals in which they were participating …

Antique toolbox: Can you identify what this mystery object was used for?

Can you identify this object, which resides in the museum collection at the Landis Valley Village & Farm Museum.

Editor's note: This story will be updated with more information. Check back for the latest updates.

Want to redecorate or remodel? Check out these 28 tips from Lancaster County home design experts

Editor's note: This story was originally published in May 2020.

Growing up, Holly Reynolds dreamed of a career in interior design or architecture. She remembers begging her mother to buy house-plan books at…

Henrietta Heisler’s mother sensed early on that her daughter was destined for a career in interior design.