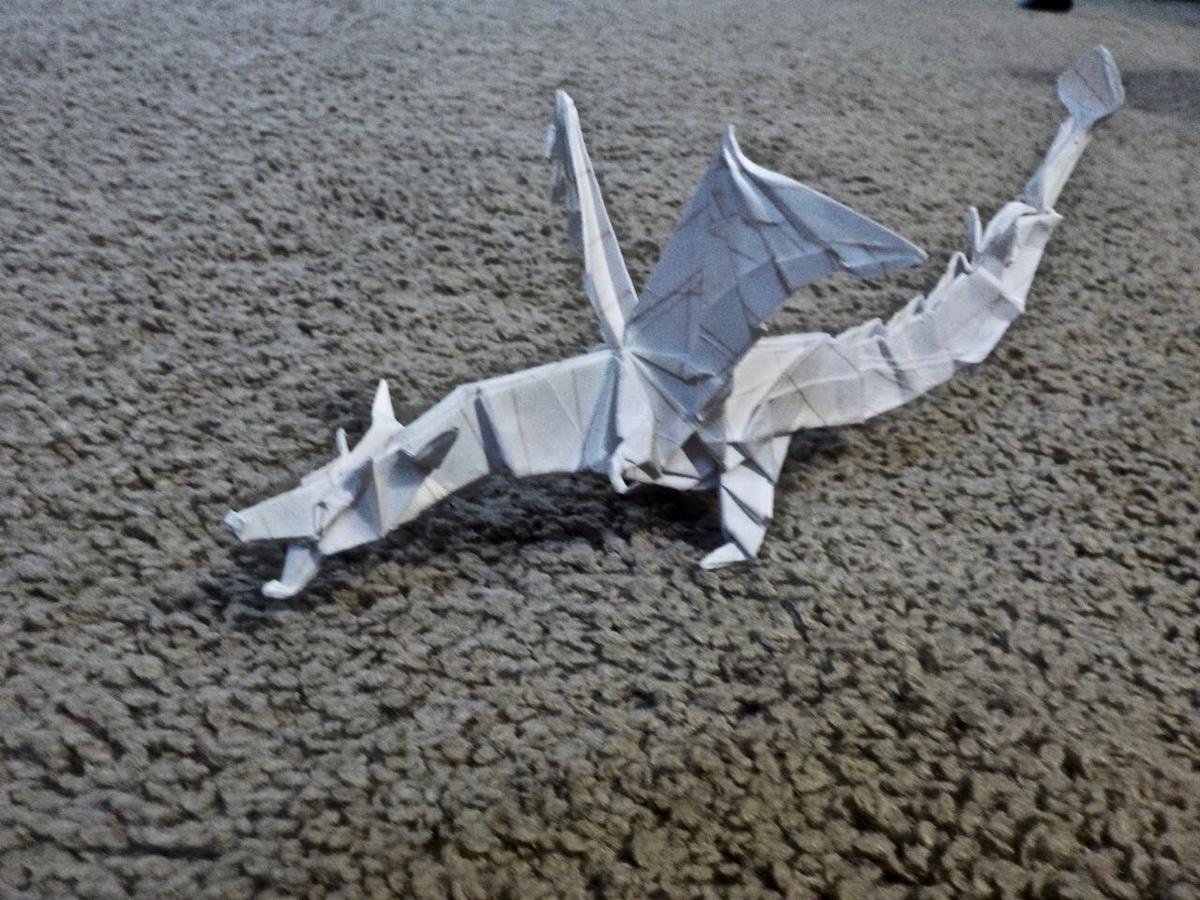 An origami dragon folded by Ezra Kauffman, a seventh-grader at Lancaster Mennonite School. 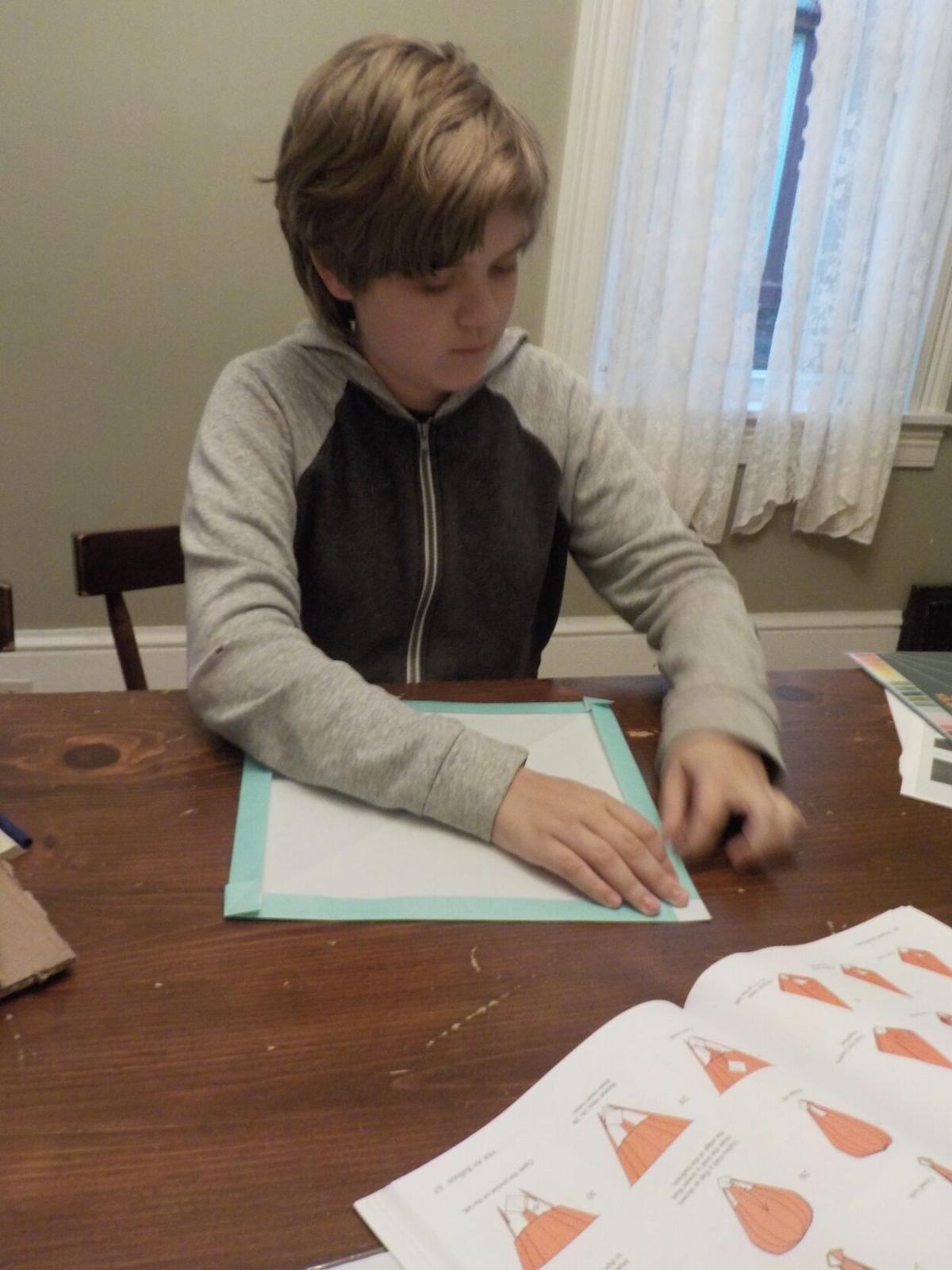 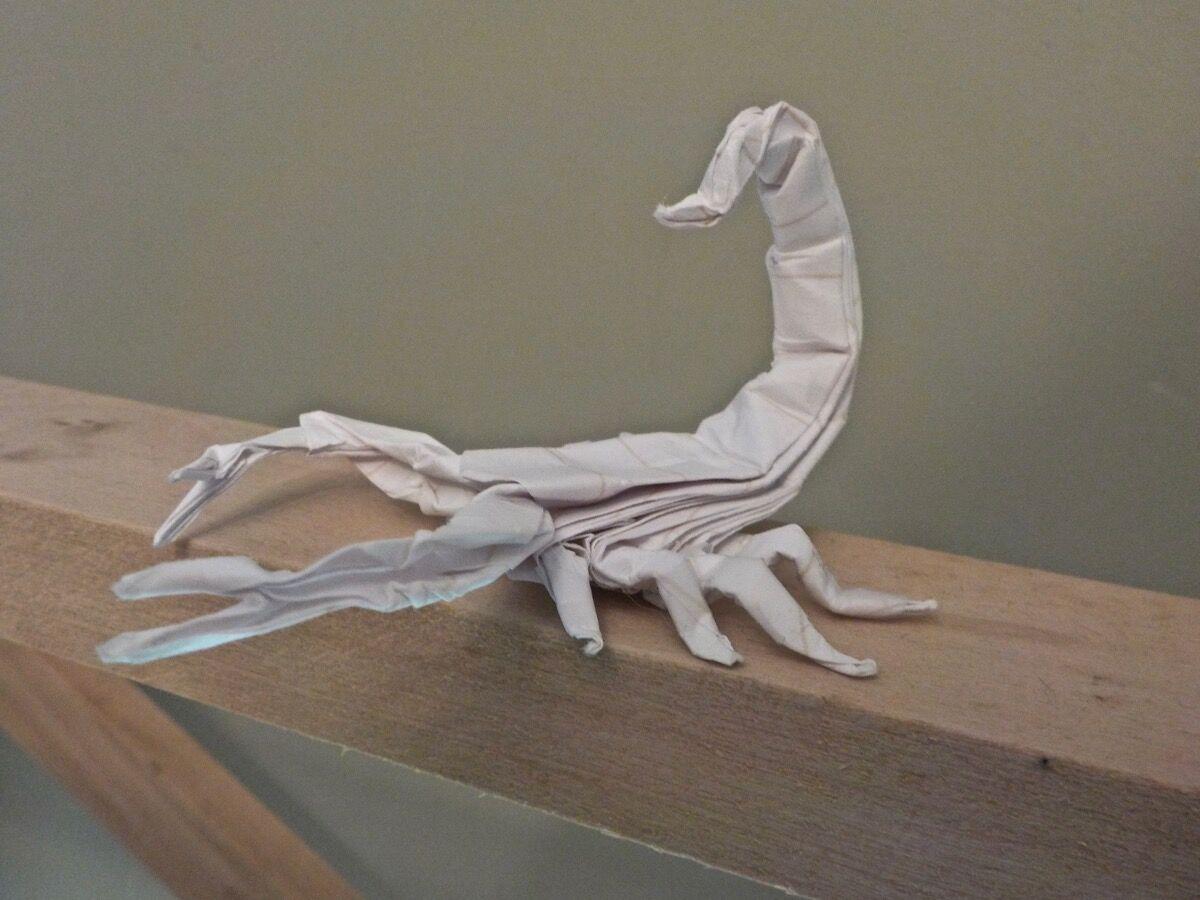 An origami scorpion by Ezra Kauffman.

Ever since Community Mennonite Church of Lancaster switched to virtual services in March in an effort to curb the spread of COVID-19, they’ve had a running joke about their cats appearing on the screen during their worship services.

But as the Rev. Susan Gascho-Cooke unmuted the congregation after a recent service, a different kind of creature appeared — first blurry and then in focus — on the screen. It was a dragon.

Ezra Kauffman, 12, was holding the dragon: an intricate origami creation. Kauffman, a seventh-grader at Lancaster Mennonite School, says he’s practicing the ancient art of ornamental paper-folding at church since before the pandemic, but on Zoom he’s able to share it with more of the congregation.

“I would take a bulletin, cut it into a square and then just make something,” Kauffman says. “When the pandemic hit, during one Zoom service, I thought ‘I’ll just go do some origami and at the end of the service I said, ‘Hey, check this out guys,’ and they just really liked it.”

Sharing art has always been a part of the culture at the Community Mennonite Church of Lancaster. The church has their own gallery space in their fellowship hall, The Parrot Gallery, which displays congregation members’ artwork and has hosted First Friday shows.

“It’s a congregation that really treasures artistic expression,” Gascho-Cooke says. “We have a lot of musicians, artists, writers and poets in the congregation. It’s just part of the DNA of the church.”

And Gascho-Cooke says the congregation has already expressed their hope that Kauffman will display his quarantine origami in the Parrot Gallery when they can eventually come back and be together in person.

“The church is always very excited when kids want to share their artwork in one way or another,” Gascho-Cooke says.

Kauffman says some people in the congregation have expressed interest in learning the craft. So he’s shared a link from one of his favorite online origami databases.

“Some people said that it gives them a project to work on the whole week,” Kauffman says, though, he notes he’s typically able to complete a piece of origami in a matter of minutes.

“I can fold and listen,” Kauffman says. Then after a brief hesitation he adds “Though sometimes, if I get really immersed (in an origami project) it’s like, ‘Oh look the sermon is over.’ ”

Kauffman, who opted for in-person learning at Lancaster Mennonite School, says he also sometimes finds a few minutes before school to fold some origami. And recently, he’s taken his paper-folding hobby in a new direction, exploring every teacher’s enemy: the paper airplane.

“I was making a paper airplane right now when you called me,” Kauffman says.

Kauffman says he remembers seeing a guy fiddling with paper during a church service a few years ago and then later, “there was an origami dragon sitting on his arm rest.” Since then, he’s kept in touch with Ben Friesen — the person Kauffman spotted that day, and owner of his own origami studio, Friesen Folding — and sometimes will email him with questions.

“It’s just really fun with how many different things you can do,” Kauffman says. “I’ve made some models that can flap their wings or kick their legs, and some designs are so super-complex you just want to bask in utter amazement at them.”

Kauffman also uses his finger dexterity to play music. He plays piano and drums. And he doesn’t just enjoy folding paper; he likes to read it too.

“I’m very much into newspaper strips like ‘Calvin and Hobbes,’ ‘The Far Side,’ and ‘Foxtrot,’ ” Kauffman says. “But lately I’ve been reading a lot of ‘The Hunger Games’ series.”

Kauffman says in the future, he’d like to become either a teacher, professional musician or perhaps get a job as an instructor in an origami studio.

“There are technically no rule to origami,” says Kauffman, “But most big origami designers prefer not to use scissors, tape or glue. And the best shape to start with is a square.”

Kauffman’s parents are supportive of his origami hobby.

“Occasionally the origami will start to pile up and my mom will issue a cleaning order,” Kauffman says.

The congregation and Gascho-Cooke enjoy his work.

“It’s just become a fun thing that we all look forward to. As soon as the service is over it’s like ‘Hey Ezra, what did you make this Sunday?’ ” Gascho-Cooke says. “It’s just a sweet thing in the midst of a weird time. We’re just grateful for these bright spots and new little rituals during this time. And Ezra’s origami is one of those.”

Paper was invented in China around 2,000 years ago. Initially paper was a luxury item, but as accessibility to paper increased during the Edo period (1603-1868), paper folding became a popular pastime. Akisato Rito’s “Sembazuru Orikata” (“Thousand Crane Folding”) is first set of written instructions for ornamental paper folding. Origami comes from the Japanese words “oru,” which means to fold and “kami,” which means paper.

Kauffman says one of his favorite go-to online databases for origami is Gilad’s Origami Page. Visit giladorigami.com for instructional videos and instructional PDF patterns and guides to make your own origami.

The chill of winter can be a very frightening thought when you don’t have a reliable source of heat. Because of this, Ranck Plumbing, Heating …

Lititz author Mari Hernandez-Tuten will host a promotion on Nov. 13 to benefit women in area shelters.

In a year marked by police brutality and racial unrest, Lancaster Friends Meeting members saw an opportunity to use its peacebuilding principl…

Congregational hymn singing is the hallmark of worship at the traditional Westminster Presbyterian Church in America.

Canopied by a tent, masked volunteers distributed containers of beef vegetable soup and bread to families who drove through New Joy Church’s p…