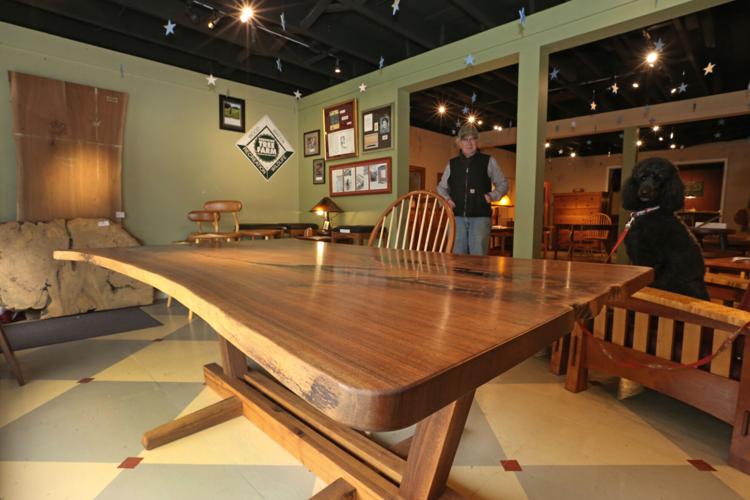 A live-edged table sits in the display window at Morton’s Fine Furniture in Lititz on Monday, March 28, 2022. 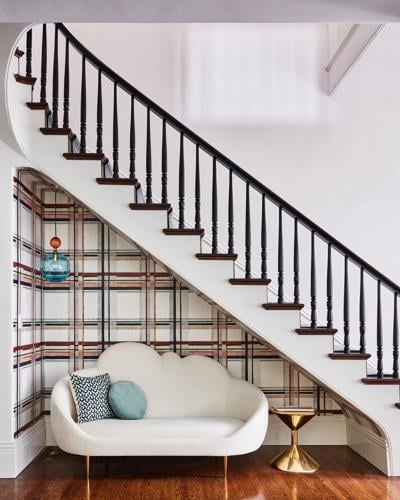 Lancaster designer Cecilia Hurdleston often shares looks she admires on her Instagram page. Some highlight the current embrace of the curve, including this design by San Francisco-based Studio Monroe. “That works beautifully because it’s almost like a dance, right?” Hurdleston says. “The straight lines and the curves are playing off of one another.”

A live-edged table sits in the display window at Morton’s Fine Furniture in Lititz on Monday, March 28, 2022.

Lancaster designer Cecilia Hurdleston often shares looks she admires on her Instagram page. Some highlight the current embrace of the curve, including this design by San Francisco-based Studio Monroe. “That works beautifully because it’s almost like a dance, right?” Hurdleston says. “The straight lines and the curves are playing off of one another.”

Considering how furniture often mirrors fashion, it should come as no surprise that designers are embracing their curves.

The idea has been touted in countless pandemic-era home magazine headlines like “The curved statement chair is having a moment” in Architectural Digest and “4 ways to try the curved furniture trend that’s everywhere right now” in Better Homes & Gardens.

But while that may make curves trendy, it certainly does not make them new, says Janine Arnesen-Nolt, owner of Arnesen Nolt Interiors in Lancaster.

“I think, honestly, they are saying stuff that every designer already knows,” says Arnesen-Nolt, who deals with curves in her book and online course, both called “Become an Interior Designer.”

“We’ve had oval, braided area rugs for centuries. And the round swivel chairs. They were a big hit 100 years ago,” she says. “Everything that goes around comes around. I just think this is a new wave of, ‘Hey, let’s make everything more cozy.’ ”

Curves lend themselves to that goal due to their impact on our eyes, Arnesen-Nolt says. Lines are directional and straight ones make eyes search further.

“If you have something in the room that’s close, that’s a curve — whether it’s a C-shaped sofa or a curved ottoman — it helps your eye just to rest on that circle,” she says. “That’s why it’s considered something to help us relax and feel calmer.”

But curves should be balanced with linear shapes, she says. Consider the 60-30-10 percent rule that designers often employ for allocating primary, secondary and accent colors.

“I guess I see curves kind of the same way. You have your room that is more linear. You have your furniture which is, often, mostly linear,” Arnesen-Nolt says. “So throw in curves for 10, 20, 30 percent at the most. It’s a good way to break up that space. But you don’t want all circles either.”

It's a balancing act, says Cecilia “Cece” Hurdleston, who runs CECILIA Interior Design in Lancaster and designs for Interiors Home. Some of her experience was shaped by managing luxury projects in Philadelphia’s swanky Rittenhouse neighborhood.

An increased embrace of circular design is definitely prevalent in major metropolitan areas and “social media world,” she says, but adds the trend hasn’t completely grabbed hold in Lancaster County.

“We’re very traditional here ... which lends itself to more straight lines,” she says.

Instagram is a different story, and Hurdleston has lately shared several designers’ noticeably curved creations — though typically balanced with prominent squares and rectangles.

“Perfection,” she wrote above a pair of curved chairs covered in plaid fabric. Plaid is also featured in a picture of an understairs nook with a cloud-shaped couch and rounded end table.

“That works beautifully because it’s almost like a dance, right?” Hurdleston says. “The straight lines and the curves are playing off of one another.”

If everything in a room were straight lines or everything was curved lines, the eye wouldn’t know where to go, she says, adding that blending the two can create a cohesive space.

She did share a photo of a powder room from an Australian designer who went for oodles of curves — from giant bird necks adorning pink wallpaper to twisty exposed piping beneath the sink.

“That room is super punchy and very colorful,” Hurdleston says. “I’m sure her intention was to make it kind of whimsical and maybe not comfortable, per se. You don’t want to spend your entire life in there. It’s more of a statement.”

In those kind of scenarios, using a majority curves may work, she says. It all depends on intent.

Hurdleston says there are many furniture options for those looking to throw a curve ball into a room. Take Hollywood designer Thomas Hayes.

“He’s incredible. He’s so out of the box in his thinking I love his furniture,” she says. “He does almost all curves.”

Hurdleston says Hayes might, however, be a bit modern for the aesthetic of many Lancaster County homes.

“Wesley Hall is a brand that I sell a ton of. And they also have a ton of curved pieces right now,” she says. “But they do a wonderful job of making more traditional curves. Not super, super modern — a more transitional style, which a lot of Lancastrians really like.”

“Those can be a good way to introduce some organic flow without fully committing to something like a curved sofa,” he says.

Thomas Morton of Morton Fine Furniture Inc. in Lititz says he — and his established client base — tend to prefer clean, straight lines.

After making furniture for 46 years (34 for his own business) Morton is just not into curves. An exception? Live edge pieces. That’s when natural log edges are left in their natural shapes.

Morton says some of that is tied to the design world’s nostalgia for designers well-known in the ’50s and ’60s — including the late George Nakashima.

Nakashima — often described as one of the fathers of the American craft movement — died in 1990. His daughter, Mira, now has the helm of New Hope-based George Nakashima Woodworkers in Bucks County.

“I’m actually standing in my storage barn right now inventorying my live edge slabs so that I know a little bit more of what I have to show customers to make dining tables, beds, whatever,” he says.

Curves don’t have to come in the form of massive furniture pieces, Arnesen-Nolt says. Accent tables of different sizes, fabric and accessories that have non-linear patterns can break up the rectilinear feeling of most rooms, she says.

A curve shaped draws you toward it.

“But if the fabric texture is uncomfortable, or the scale is too small, or it is in a busy stimulating environment, then you still might not want to stay there long,” she says. “There are many elements of design and line — including curved lines — can only do so much.”

“I really like straight lines. I’ll be honest,” she says. “But I do have a couple curved pieces — just to keep it easy on the eyes.”

That side table is drum-shaped and cream in color with the base and the top outlined in black in order to accent the curve and to definitely draw the eye toward it, she says.

There’s no denying the potential relaxation value of curved lines, she says, adding that’s likely why people are gravitating toward them in a world facing pandemic and war.

But personality should be kept in mind when considering the specific impact of curves, she says.

“I’m a very disciplined person. I’m structured. I like schedules. I like being punctual,” Hurdleston says. “I think straight lines are easier on my mind than round. It’s a thing. You wouldn’t think, but it’s a thing.”

Steve Hurst is no stranger to items of sentimental value.

5 ways design can affect your mood and mental well-being

There’s a scene in the new season of “The Marvelous Mrs. Maisel” in which Midge, the title c…

Think of an item — any item — you might use in home decor. Chances are somebody now sells a …

Try these tricks to transform a dark room

Andre Rothblatt accidentally discovered the dark. The San Francisco architect didn’t set out to prove that a room without windows could be exc…

How to measure for curtains in 3 easy steps

Curtains can make or break a room, says Chad Newcomer of Grauer Paint & Decorating. There are many possibilities for materials, and depend…