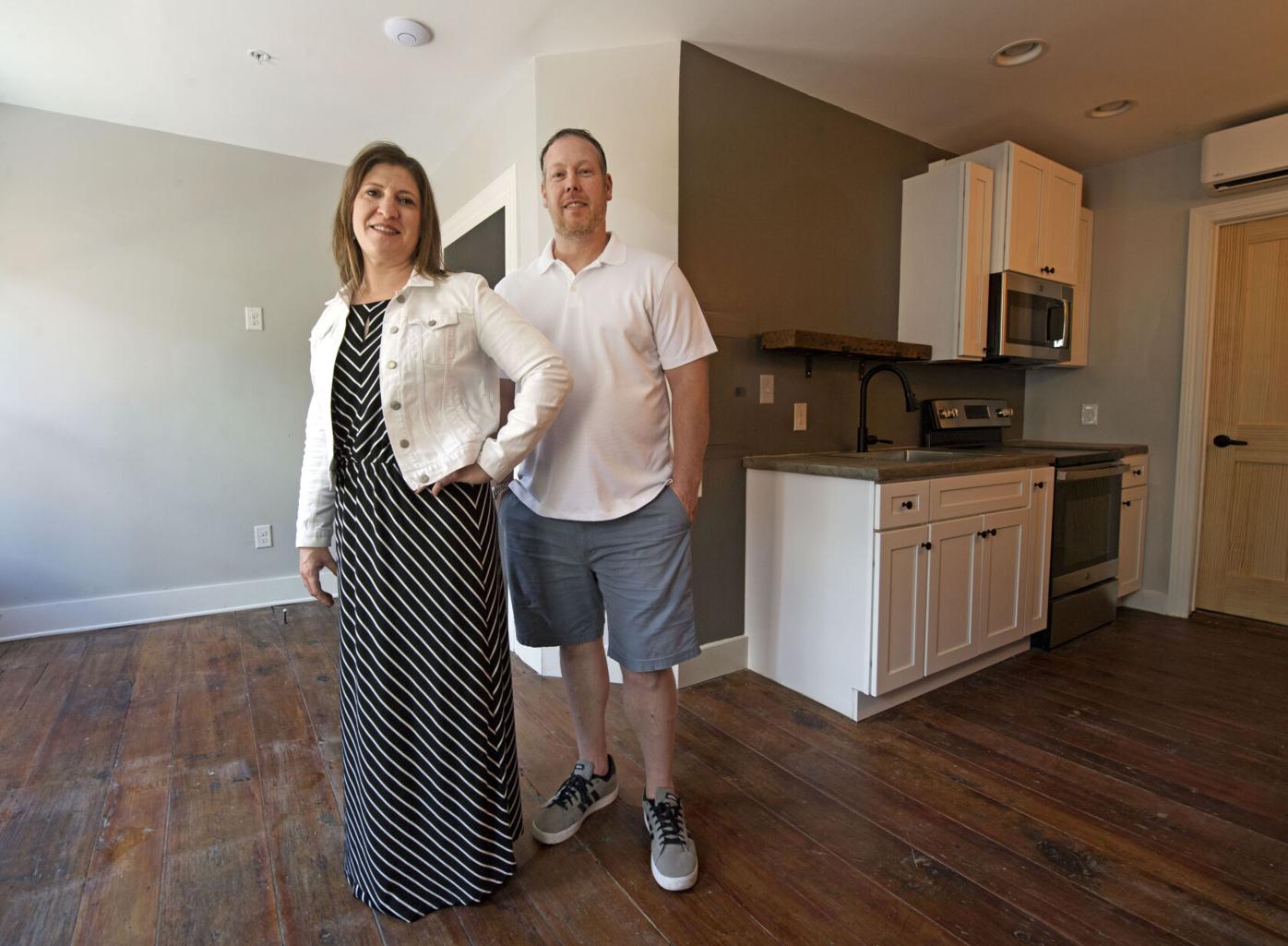 The micro-apartments on Lancaster's North Water Street were created as efficient, high-end living for an affordable price, says Steve Young. He and Jennifer are co-founders of Dwell. 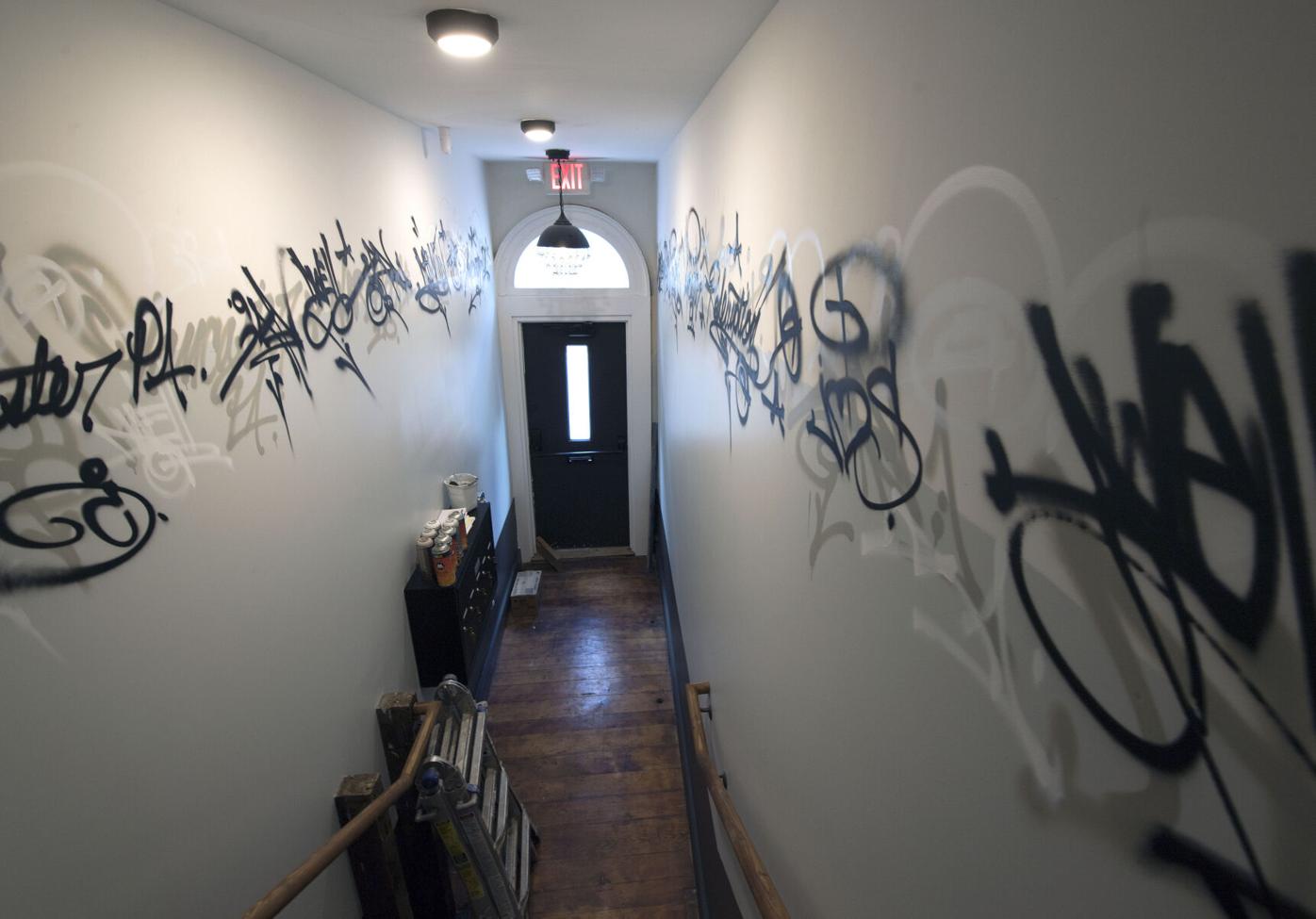 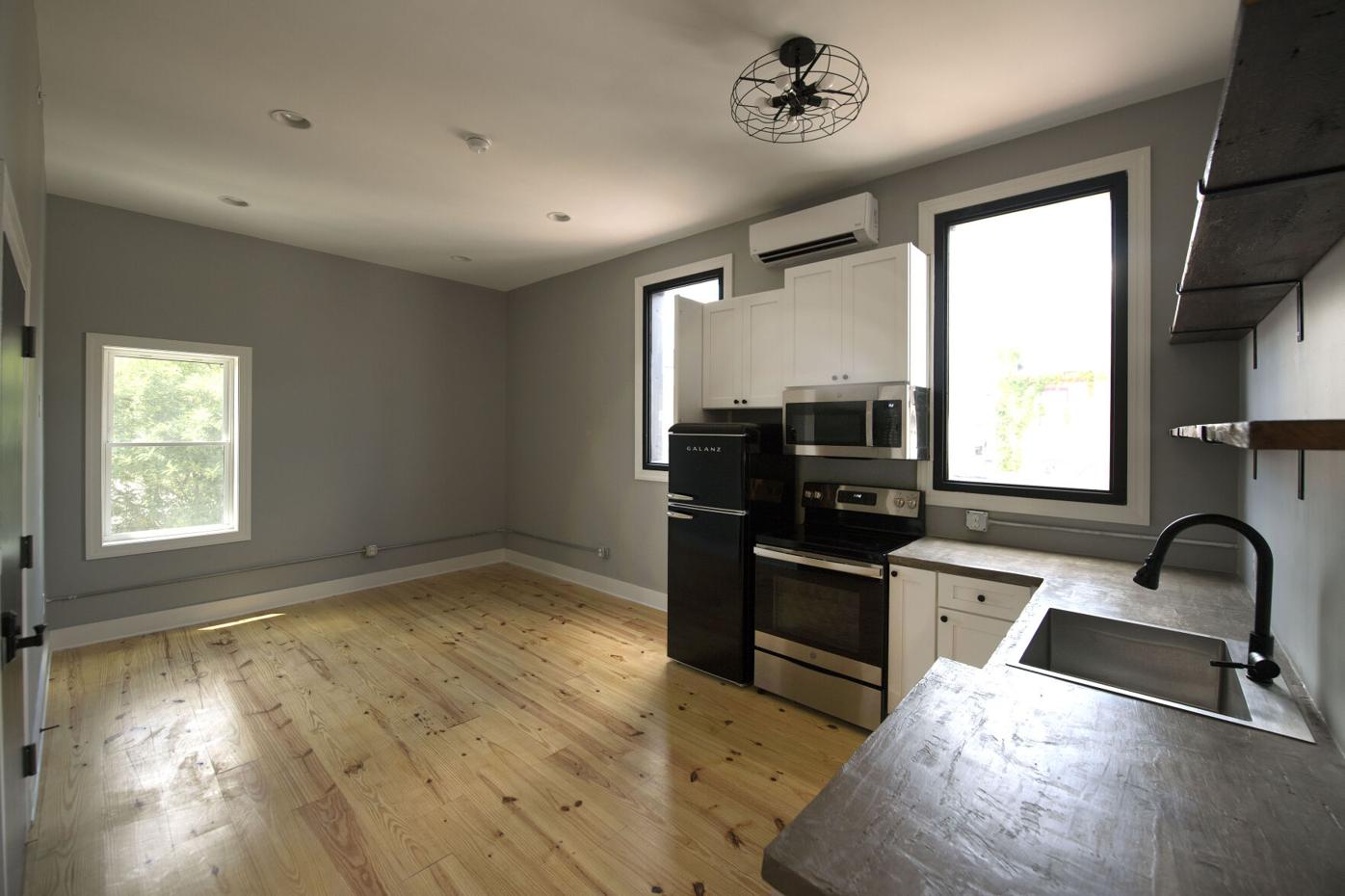 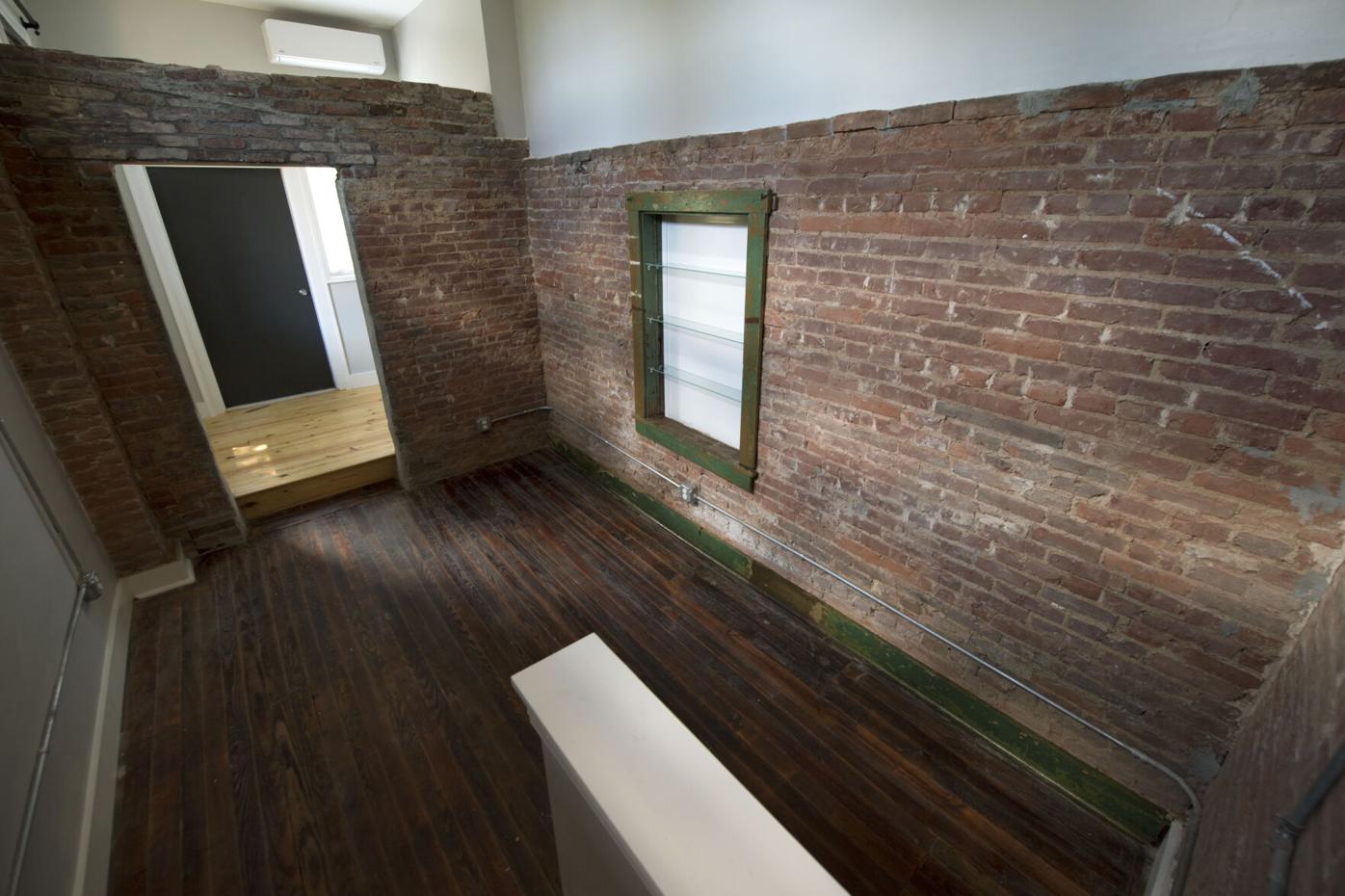 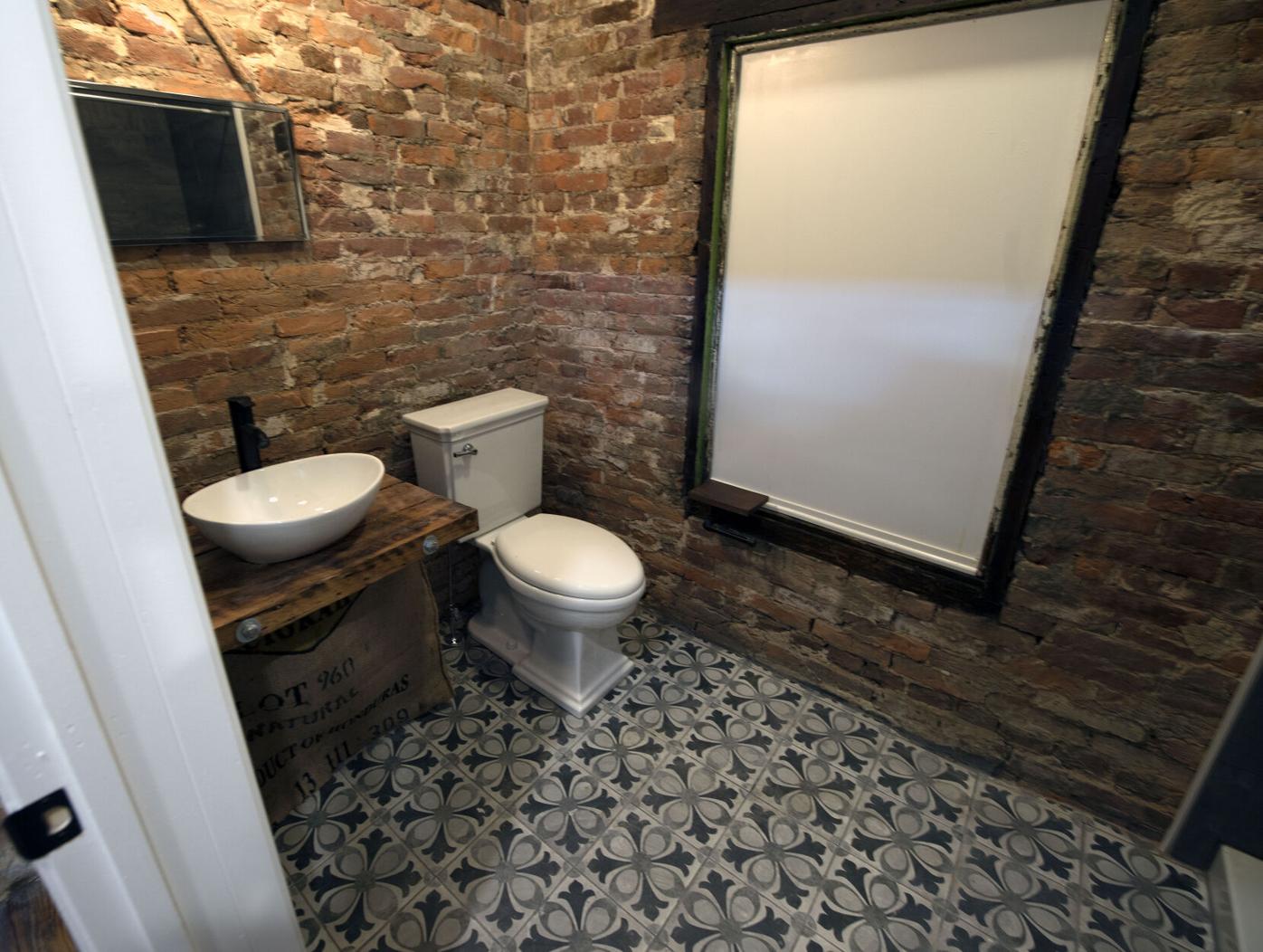 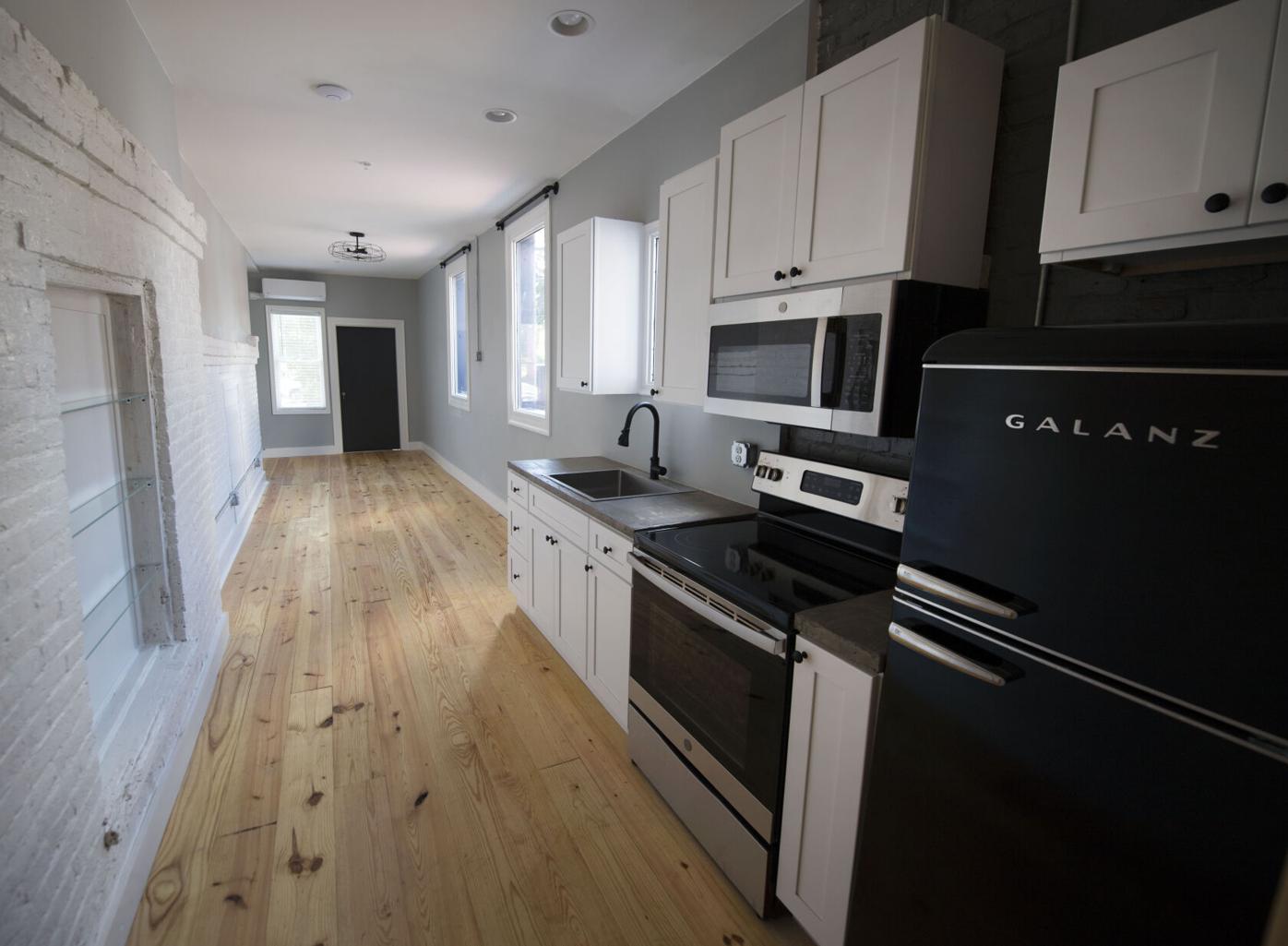 One of the new units at Dwell. 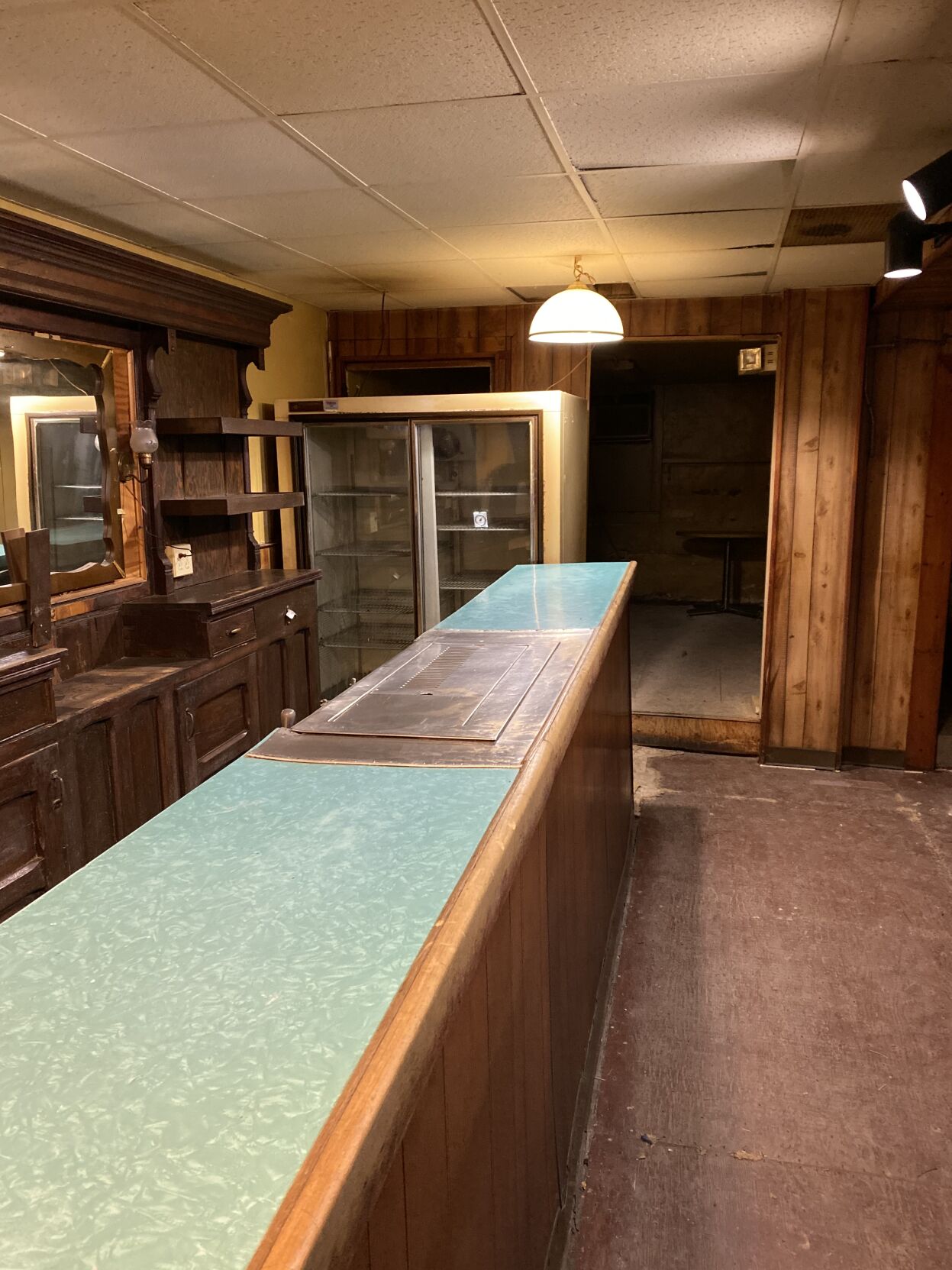 The former In and Out Camping & Relief Association's bar was removed from the first floor of the building during renovaions. 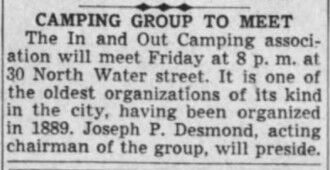 The micro-apartments on Lancaster's North Water Street were created as efficient, high-end living for an affordable price, says Steve Young. He and Jennifer are co-founders of Dwell.

One of the new units at Dwell.

The final touches are coming along on unit No. 1. The bathroom already has a tiled shower and an original window that’s now a shelf.

The kitchen has new appliances and a counter that extends long enough for a few seats.

The living space has tape marks on the hardwood floors marking where the daybed will fit.

At 260 square feet, this is the smallest new apartment in Lancaster city.

This home is tiny enough to be called a micro-apartment. The five apartments at Dwell, 30 N. Water St. each have lots of natural light, high ceilings and complete kitchens and bathroom. That’s Steve and Jennifer Young’s recipe to make smaller spaces greater.

While tiny living might not be for everyone, each apartment here was claimed by a tenant before construction ended. For the city, new ideas like this to offer good-quality, safe and affordable residences are welcome, says the city’s department of community planning and economic development.

(To look around one of the apartments, click and drag your mouse on a computer. On mobile, move your device to look around.)

A building with potential

A few years ago, Steve Young opened Warehouse 210, a co-working space in a former tobacco warehouse on West Grant Street. Later came plans for Enclave, a community of art studios and galleries in shipping containers.

Steve and his wife Jennifer noticed the property on nearby Water Street. It was for sale by owner and a pre-20th century building, the kind of space they renovated like State and Main in East Petersburg and through ventures such as Domain Lancaster.

The building on Water Street had long been the home of In and Out Camping & Relief Association, a private social club with roots in the late 1800s. When the association dissolved in 2009, the bar closed. By the time Steve and Jennifer stepped inside, the building had been vacant for about a decade.

“There were holes, places where the outside was coming in,” Jennifer says. “It just wasn’t very pleasant initially.”

Still, it was in a great location so they purchased it just before the pandemic brought life to a halt. The couple owns the property through BE Enterprises, named after their teenage daughters.

The Youngs envisioned Dwell as efficient living in downtown Lancaster. The apartments they’ve created range from 260 square feet to a bit more than 400 square feet. Traveling overseas reinforced the idea that you don’t need a lot of space.

“You don’t really need an insane amount of space to live in,” Steve says. “You just need an efficient, functional space.”

Each apartment has air conditioning and its own appliances, including a washer-dryer combo. Each space comes with Internet, access to the co-working space and a streaming service that has yet to be determined. Tenants pay $895 a month plus their own electric.

The apartments have different layouts and features. Barn doors on tracks save space. Some of the window wells have shelves. Appliances tuck underneath countertops.

“Everything is designed purposefully,” Steve says.

Bekah Church signed up for her apartment at Dwell even before it was finished. Church is a stage manager for Fulton Theatre. When the theater closed, she moved in with family in Maine with plans to return to Lancaster.

A friend obsessed with tiny home shows discovered the Dwell website in the fall and shared it with Church. Dwell’s across the street from the theater and she liked Steve’s passion for the project.

“This is too good of an opportunity to pass up,” she says.

On floor plans alone, she picked her apartment, one large enough for a separate bedroom. When she moves (in time to prep for Fulton’s “Fun Home”), she’s looking forward to the bright light, the reliable heat and having an older building that’s well laid-out.

Church also says she feels lucky to find a one-bedroom apartment for $895 a month. In her apartment search, she found more places closer to $1,200 a month.

To create the small apartments, the Youngs needed a special approval. The minimum size for an efficiency in Lancaster is 400 square feet. A one-bedroom unit must be at least 550 square feet. The city’s zoning hearing board granted a variance for those minimum sizes.

“There is a housing inventory problem in the City and metro area, which is pushing up prices and causing other pressures,” staff from Lancaster’s department of community planning and economic development wrote in an email. “We encourage a diversity of housing development, both in terms of housing type and serving all income levels.”

Dwell isn’t the only new small home approved in the city. A tiny home was set up at 765 Saint Joseph St. a few months ago. Also, a building at 351 W. James St. received relief from the space requirements, the department says.

For the Youngs, they spent more than a year renovating the building into Dwell. The first floor had a bar and details from the 1970s: lots of dark wood, paneling and drop ceilings.

Through construction, they remove the modern additions, exposed brick walls and changed the location of the stairway, giving tenants a separate entrance. The entrance and hallways are tagged with graffiti-style art from artist Ramon Trevino.

They added a third floor and an addition in the back of the building, which added space, an accessible entrance and a fire escape.

The building is now nearly 3,600 square feet, including about 1,200 of commercial space on the first floor.

Some plants love humidity and warm temperatures, making them top picks for bathrooms.

A look inside a Pequea Township one-room schoolhouse, now home to a former student [photos, video]

Is it illegal to kill a praying mantis? Does PA have 'murder hornets'? 3 summer bug facts to know

In the garden, plants and insects are intrinsically linked. Here are some popular myths and perhaps surprising facts about the bugs that you m…

How to see Lancaster County's top flowers and pollinator plants, plus idea gardens, for free

After a COVID-19 shutdown, Southeast Agricultural Research and Extension Center near Manheim has re-opened to the public.

Antique toolbox: Can you guess the identity of this mystery tool from Landis Valley museum?

Do you know what this mystery tool, from the Landis Valley Village & Farm Museum collection, was used for?

After a year of no activity because of the pandemic, the Wheatland Community Garden needed some work.

How does pH help or hurt your plants? This science fair winner has the results (and an easy way to test pH)

Find a sunflower field and learn how to grow your own: 46 classes and events for plant people to try in August

This August, there are dozens of talks and classes to learn about plants, virtual and in-person in the Lancaster County region.