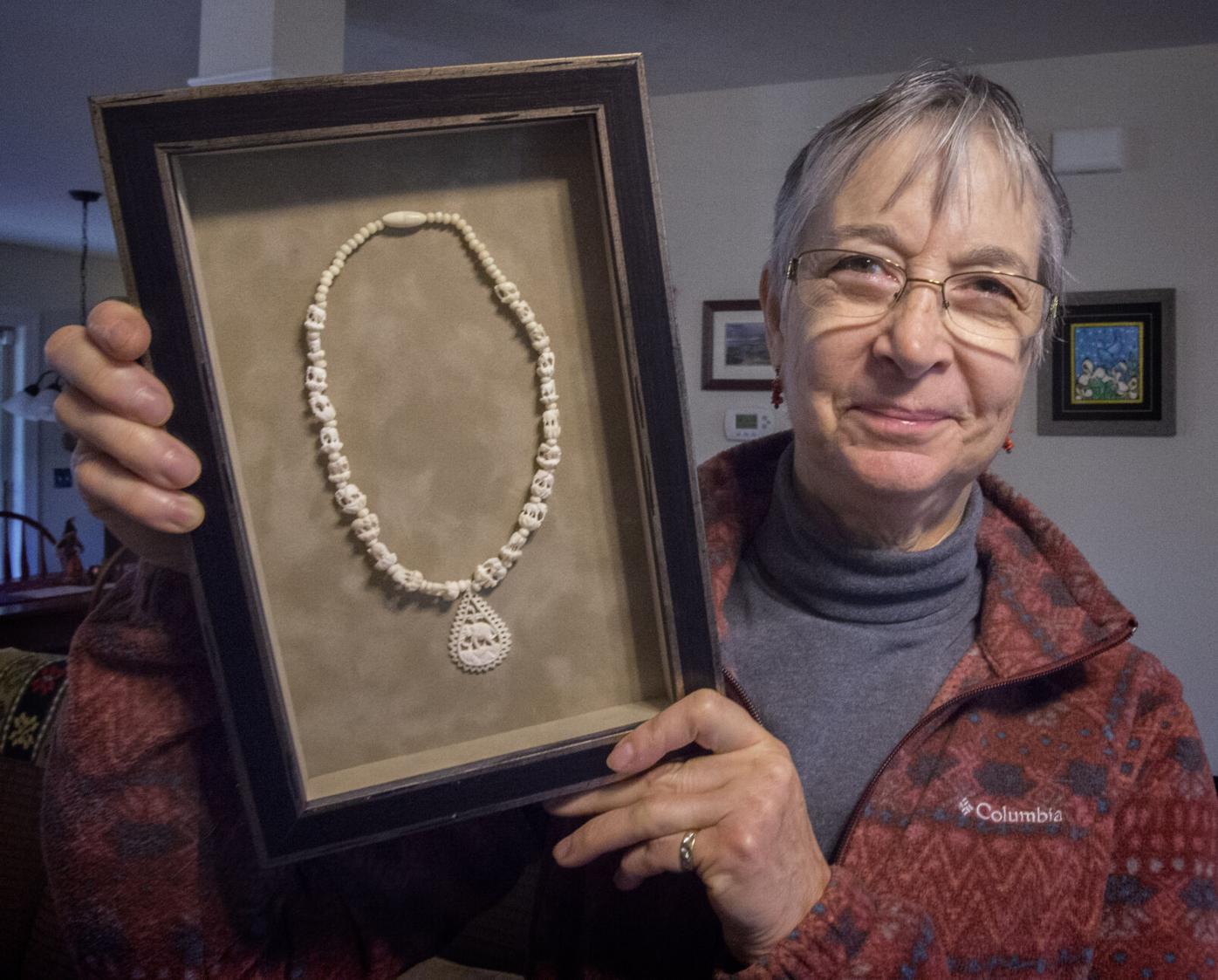 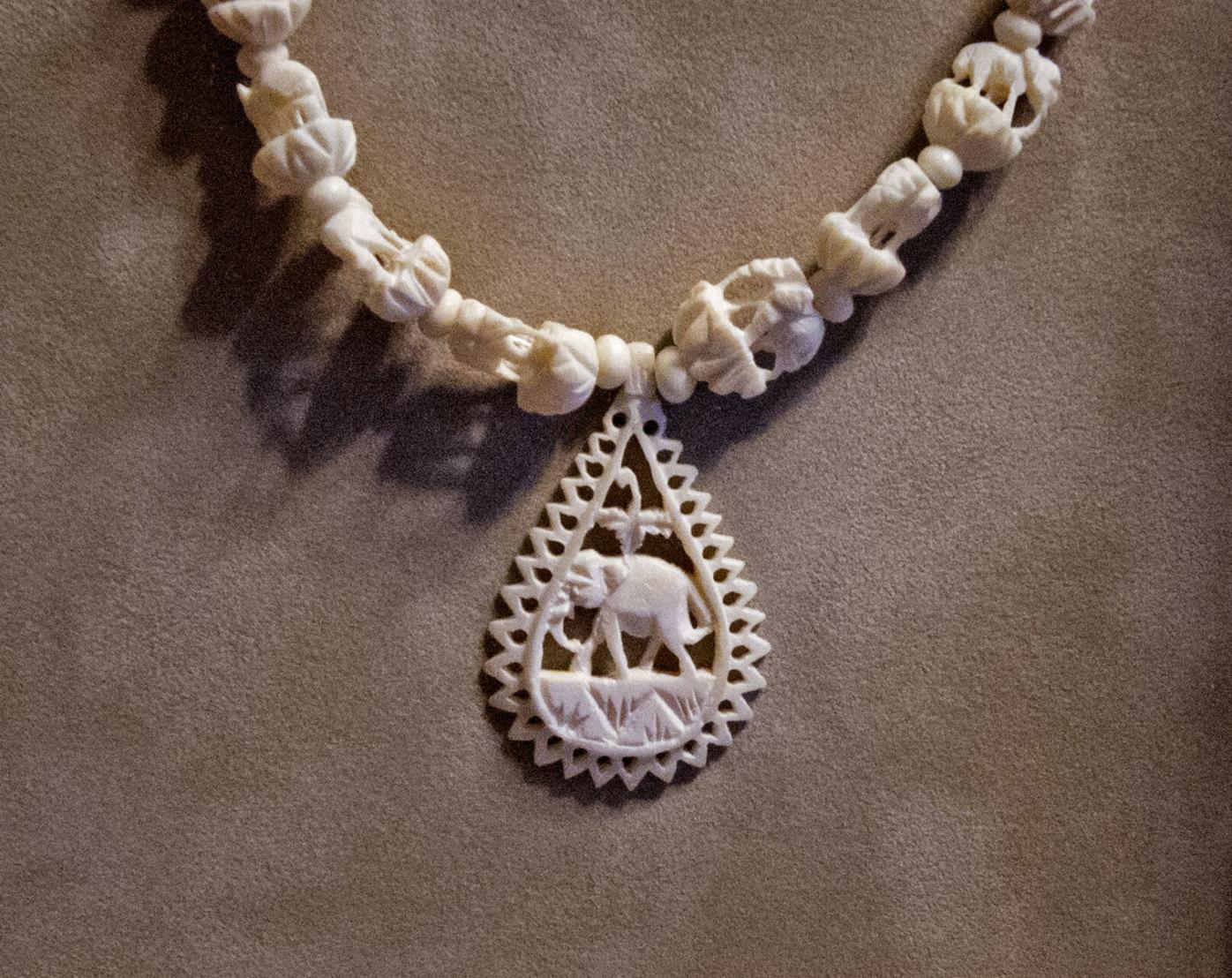 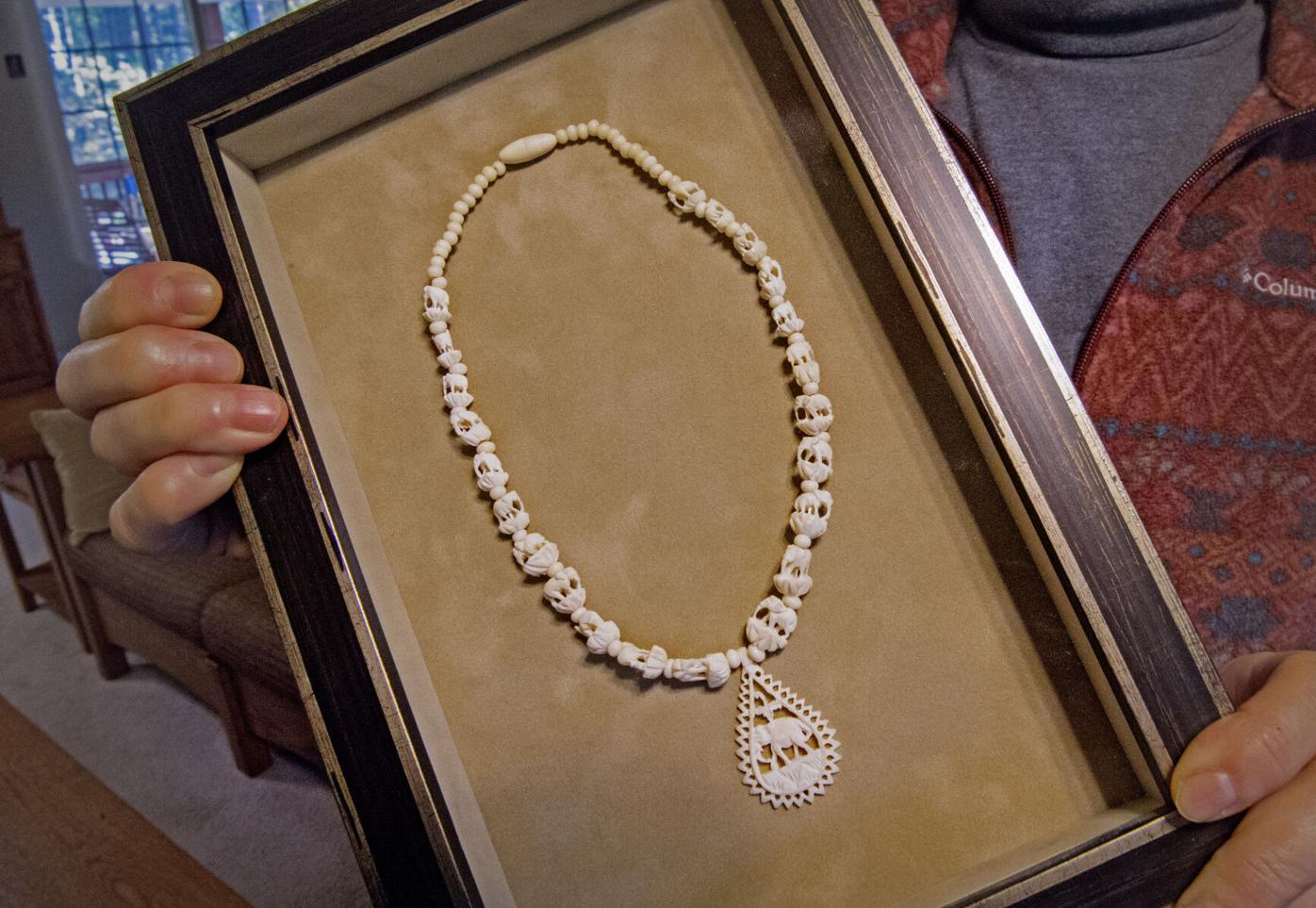 Like so many of her fellow baby boomers, Sandi Bush grew up with a father who would never talk about World War II. She knew he was injured. Charles “Chuck” Stevic walked with a limp for the rest of his life. She knew he had been in charge of a control tower at a landing strip in Burma (now Myanmar). She’s guessing he ate rice three meals a day because after that he’d never touch it. But that was about the extent of what she knew of her father’s one major journey outside of rural Ohio, where she also grew up.

Years after Stevic died, Bush learned another piece. While overseas he apparently bought some jewelry for his sister, Peg. Bush, who now lives in Elizabethtown, owns that jewelry now.

“While his experience was pretty awful, as all war is, he was able to bring home a lovely carved ivory necklace,” she says. “In those days, people didn’t realize how awful the ivory trade was and the terrible toll it took — and continues to take — on elephants.”

For that reason she’d never wear it. But she treasures it. Bush tucked it away for a time but now has it displayed in a shadow box that reminds her of her father each time that she sees it.

The necklace was something you never even knew about until after your aunt passed away and your cousins told you they’d found it in her belongings. Tell me about that conversation.

We went home for the funeral. My aunt had been sick for a little while, so I imagine her kids were already organizing. … And they just told me about this necklace. She really never wore it. But she kept it and told them my father had brought it back for her from the war. They wanted to know if we wanted it for our family. … My sister and I looked at it, and I was the lucky one who got it.

Long before you ever saw this necklace, as a child you visited the Ohio museum of the Warther family, which had several generations of ivory carvers. How far was that from your house growing up?

So was there a chance your dad would have been there before he got that necklace for your aunt?

I would doubt it because he was just out of high school when he went into the service, into World War II. And my grandfather owned a gas station in town that was open seven days a week. So I suspect that they did not often go anywhere. And knowing what I know about my grandmother and grandfather, I don’t think they would have taken their kids on some sort of an outing like that.

You don’t find an ivory carving museum in every town in the world. It’s somewhat ironic you had one so close by.

It is ironic. Very much. And in hindsight my father never mentioned anything about that necklace when he took us down to that museum. At least I don’t remember him saying anything about it.

You said you were fascinated by the ivory carvers’ technique but that it took on a little different tone when you realized the impact on elephants. The David Warther Carvings website does mention that the carving done there today is all on documented, pre-ban antique ivory. Would that make it more appealing to watch again?

I would say so. Back when we visited, it would have been probably in the late 1950s, early ’60s. I don’t even think anybody was thinking about the ivory trade at that point — in our country anyway. So I would expect that a lot of the ivory back in that day was from people who just killed the elephants for the ivory, which I think is what everybody is trying to avoid happening today.

Could you wager a guess at how many hours it took someone to carve that?

I have no idea. I really don’t. It is so small. … I just can’t even imagine tools that small. Ivory is not soft. It’s hard like stone.

You said you can relate to folks who are keeping some of their more complicated heirlooms tucked away. Any advice for them?

I guess it would depend on what it is. If it was maybe artwork stolen by the Nazis? … Something like that should definitely be returned to the owners if they could be found. … But this is something my father bought. I think of it as artwork. A beautiful piece of artwork. Civilization is always going to be changing. Fur coats used to be all the rage, and today they make people very unsettled. And 100 years from now there are going to be things we have today that people are horrified about.

What’s your happiest memory of your father?

He was just a simple and happy person. He never got mad. I used to get migraines as a young child and really into adulthood. And he was always helpful when I’d wake up with those. … Ice was really all they could do then. But he was just so very kind about that. He’d help anybody he could. He just enjoyed life and was a very caring person. And that’s what I miss most about him.

That necklace is now obviously more than 75 years old. Where would you like to see it 75 years from now?

I’ve talked to a couple of my nieces about it. I don’t have any children. So I’m hoping when I die it will go to one of them and they’ll pass it on to their children, that it will stay in the family. Or maybe they’ll find some museum that’s interested in it.

John F. Pyfer Jr. has a lot of collections.

Christy Martin is a huge proponent of keeping things neat and tidy.