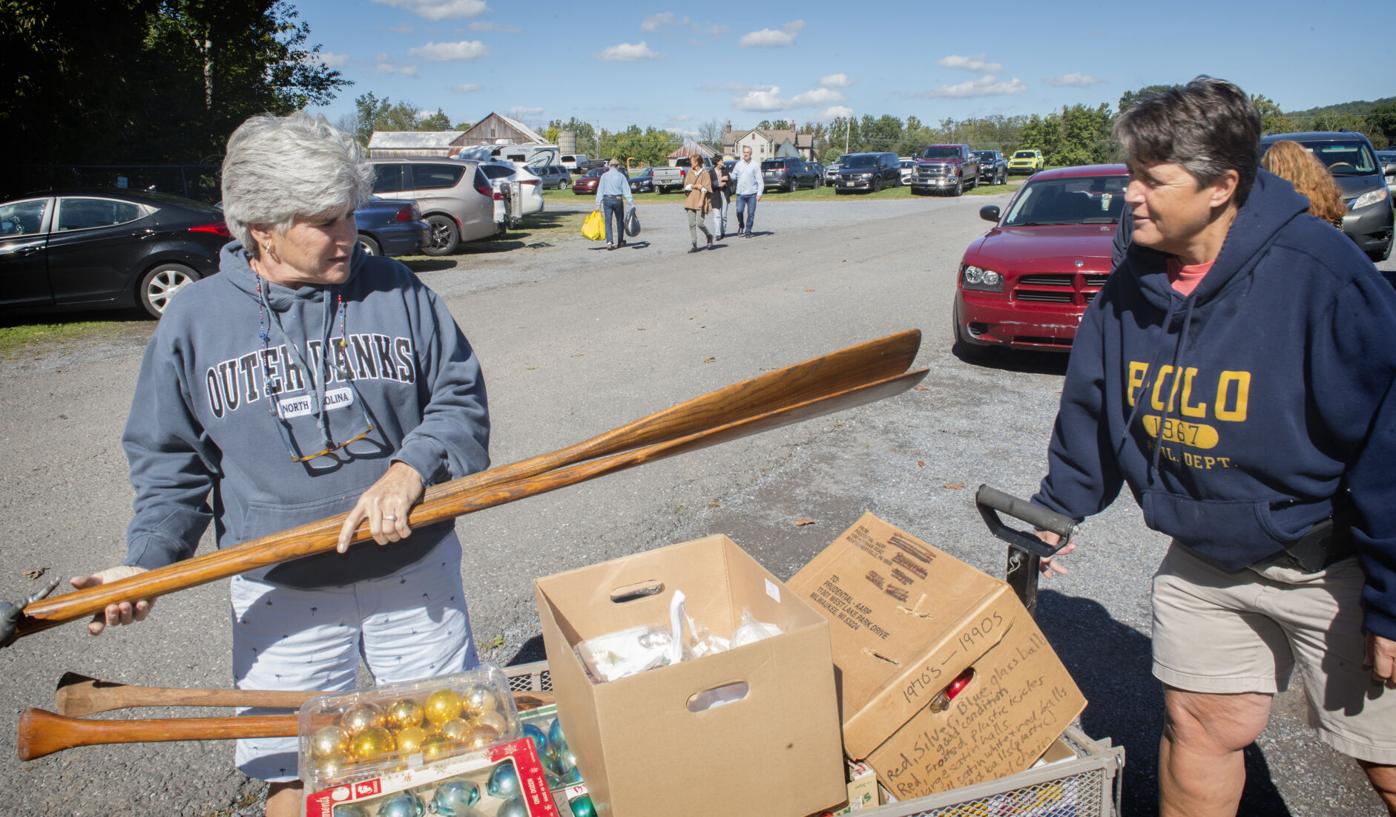 Lauren Romig, left, of Rehoboth, Delaware, worked fast on the first day of the fall antiques extravaganza to fill a trailer with treasures. 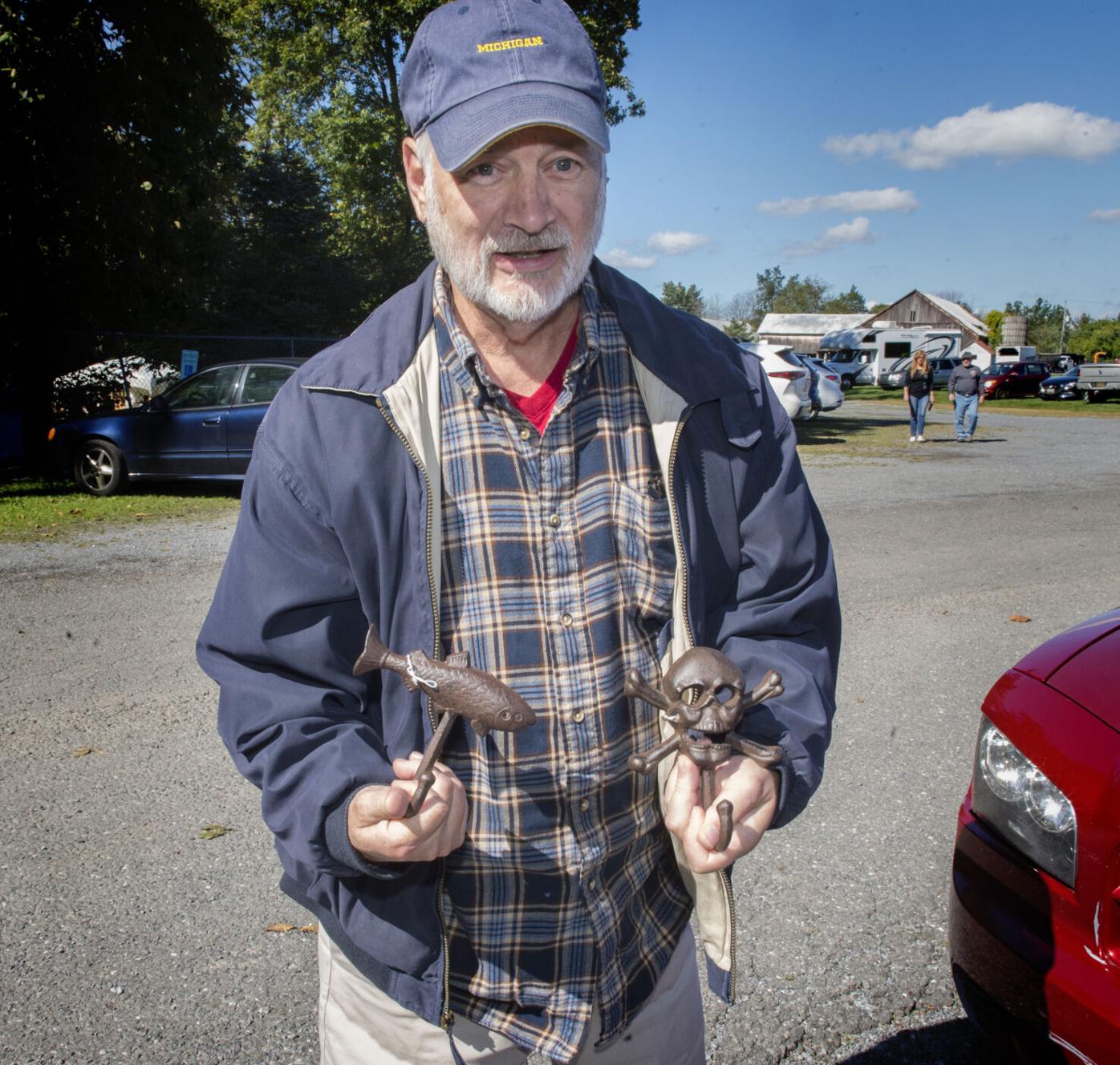 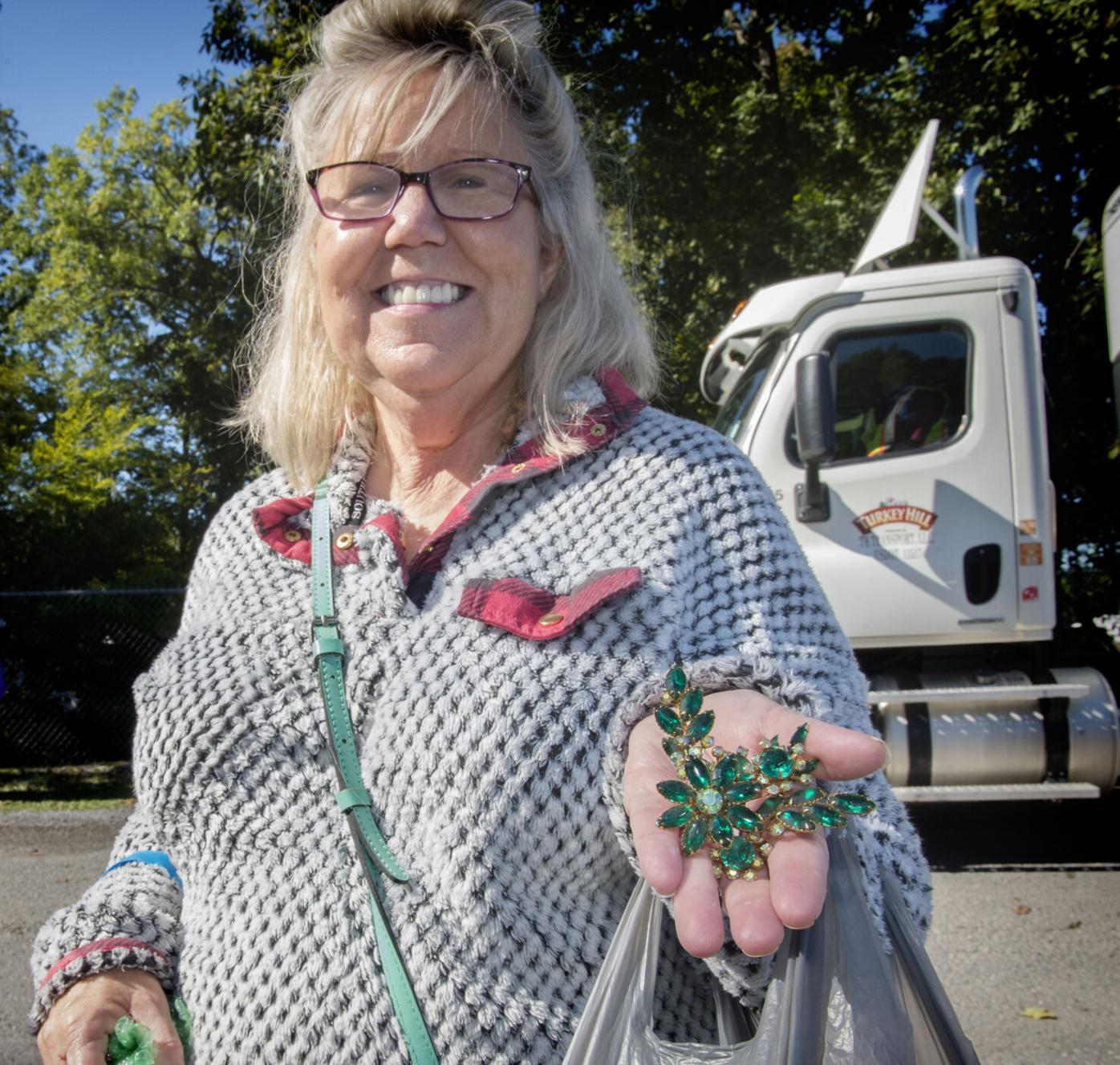 Debbie Poteete, of Mt. Juliet Tennessee, bought  a pair of pins during the fall antiques extravaganza in Adamstown. 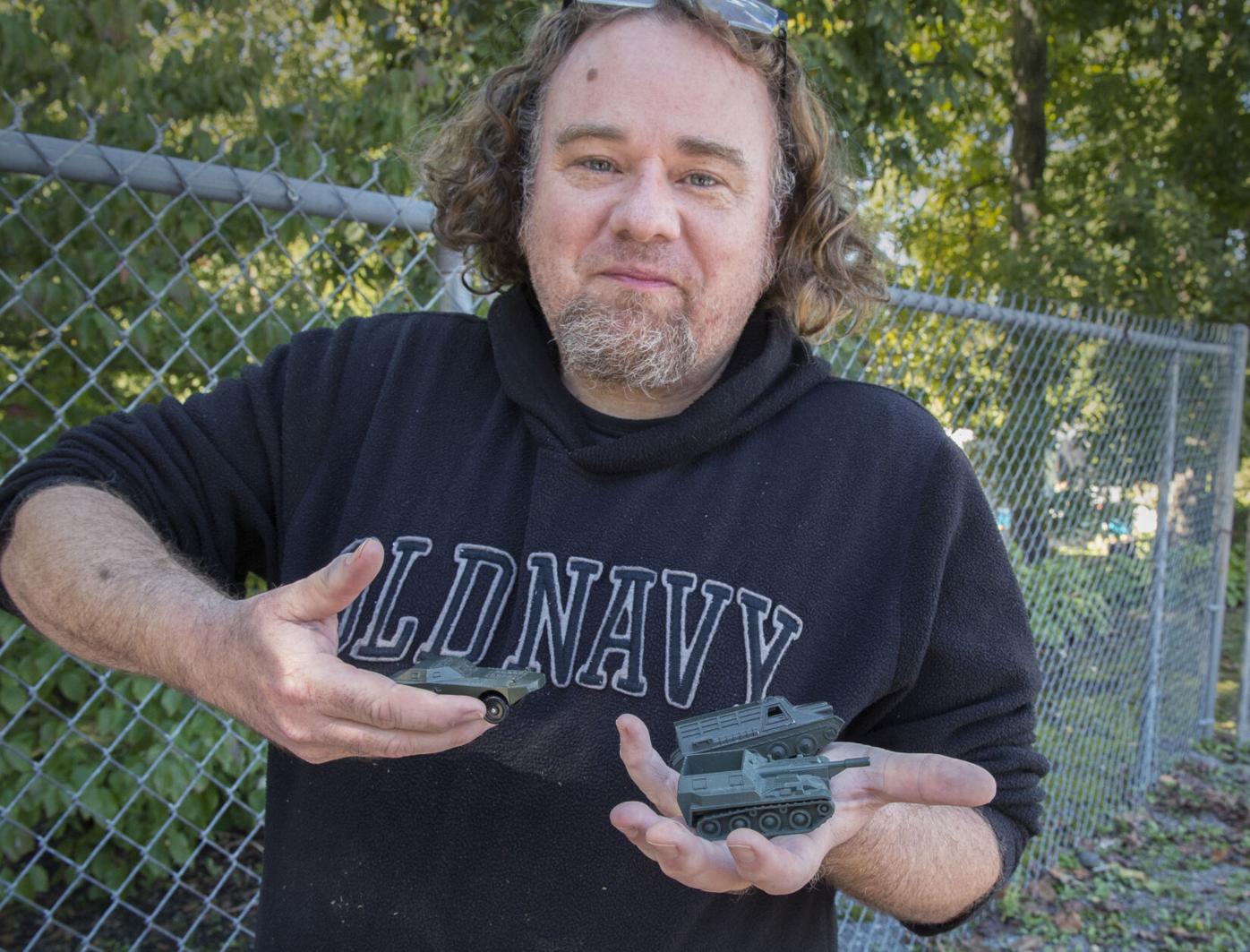 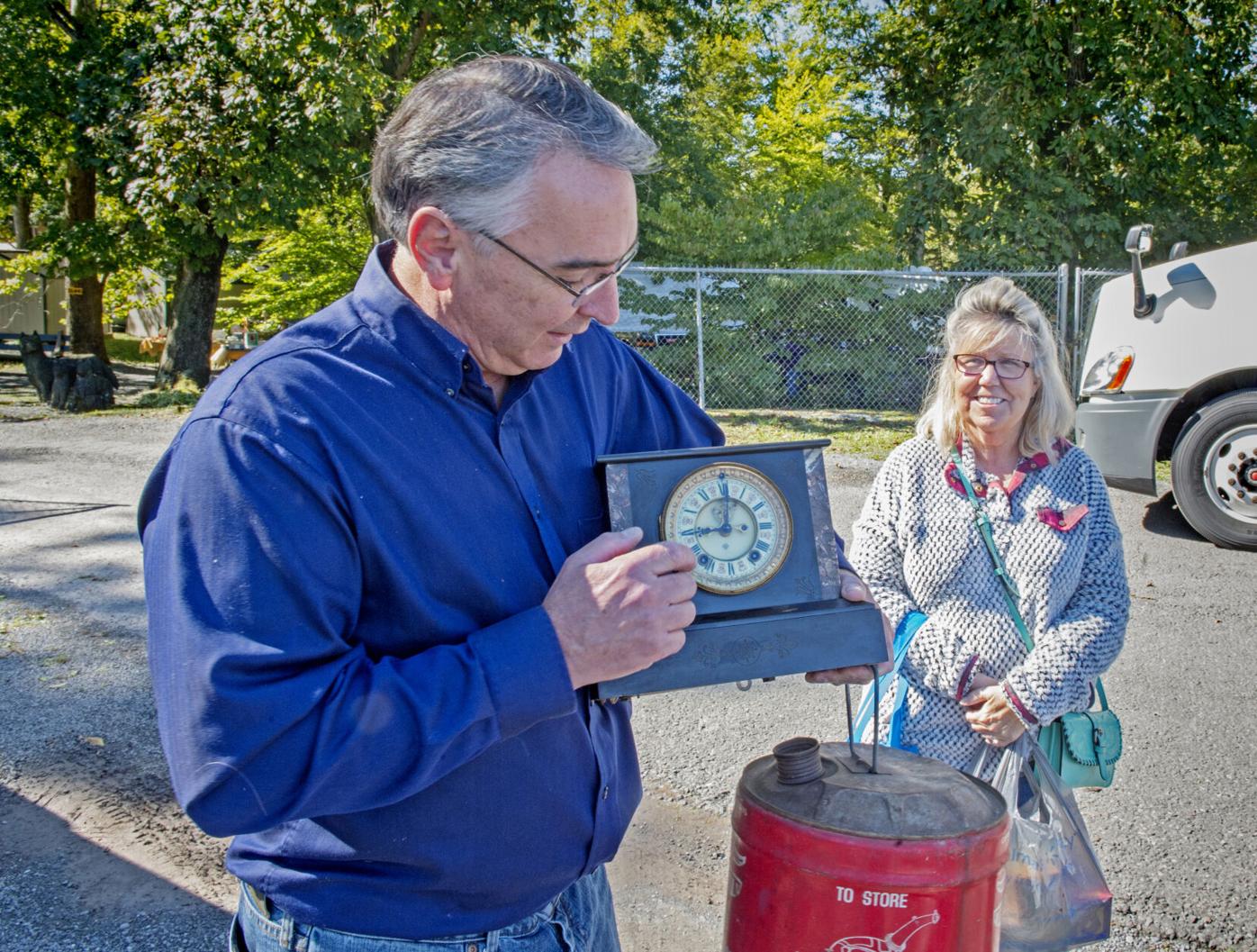 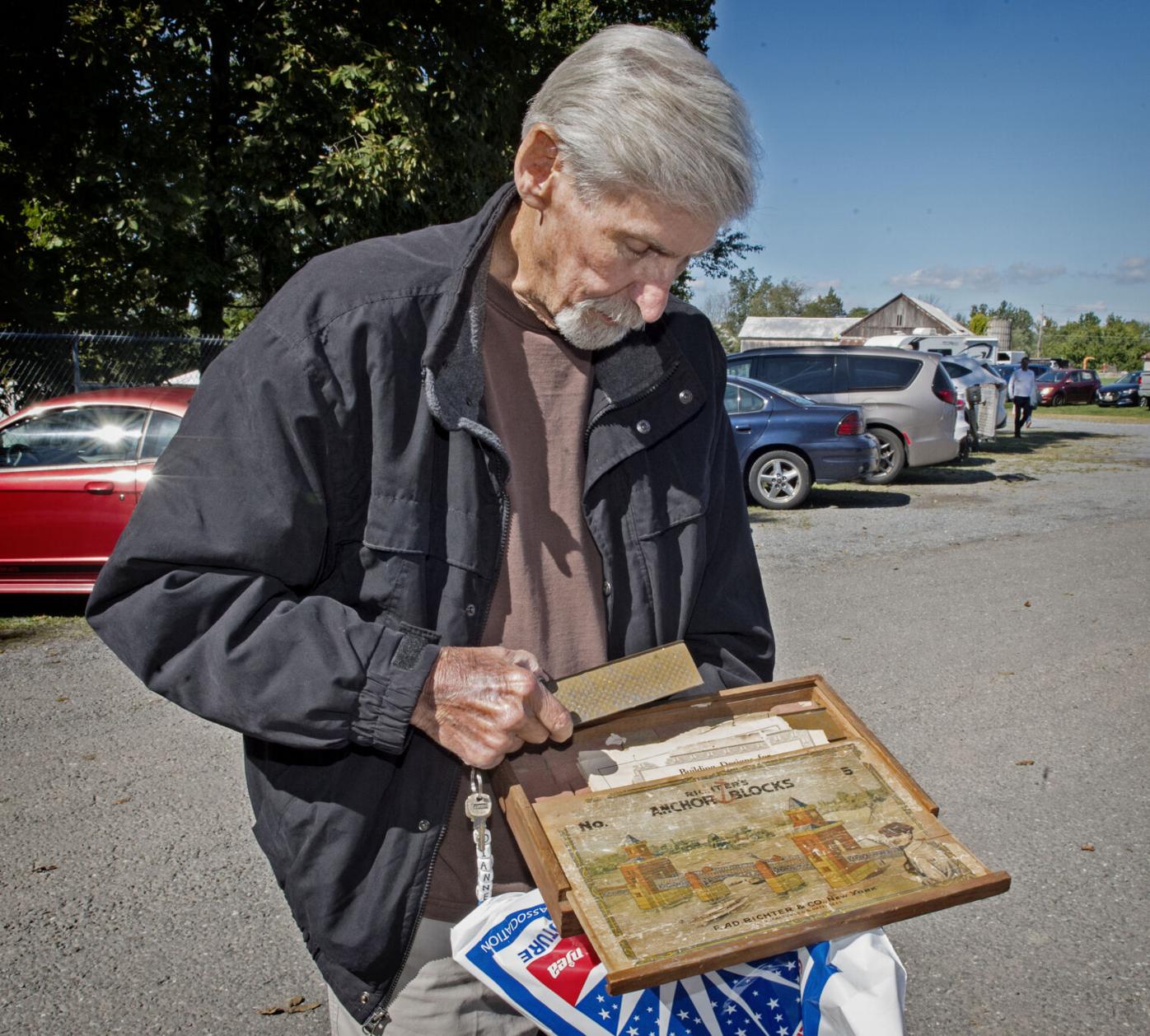 Charlie Watts, of Elizabeth City N.C., bought a set of Richter's Anchor Blocks during the fall antiques extravaganza in Adamstown.

Some see an antique’s imperfections as character.

And some get excited when they spot a mint condition find.

Whatever they seek, the pandemic didn’t stop the fall Antique Extravaganza from bringing antique hunters to the markets, shops and dealers throughout this northern Lancaster County town.

Lauren Romig has made the trek from Rehoboth Beach, Delaware, for more than two decades.

“We never know what we’re going to find,” she says.

Her trailer was far from filled on the first day, but she already had a favorite: a small mayonnaise crock.

“It’s beautiful. It’s German,” she says. “I’ve never seen one like that, and we’ve been working for more than 20 years.

She and a few of the thousands of pickers shared their favorite finds.

Alex Poteete, of Mt. Juliet, Tennessee, found this Ansonia clock, made in New York in the late 1800s.

It’s one of his favorite brands and this one has an open escape, making it even more special.

“Being marble, most of the time they're chipped up,” he says. “This one was in real good shape.”

Poteete comes to Pennsylvania to look for clocks because the antiques are cheaper, compared to Tennessee.

Back home, it will join his collection of about 350 clocks.

Debbie Poteete, Alex’s wife, picked a pair of antique pins in the middle of her search for candlewick glassware.

The glittering rhinestones caught her eye. She bought a pin with peacock green stones and a pink pin.

“I’ll wear them to church on Sundays,” she says. “I display them. I have some of the old-time jewelry boxes that have the glass tops. I’ll put them in there.”

Robert Phillips found two hooks: one with a fish and one with a skull.

“I put them up in a barn and hang things on them,” he says.

It was Phillips’ wife, Charla, who wanted to return to Adamstown from their home in Flat Rock, Michigan. They came here four years ago in the spring. The fall event may have had fewer vendors, he says, but the weather was perfect.

While Charla looks for glass, Robert has an eye for metal.

“I had a welding background so I appreciate metal,” he says.

Charlie Watts walked away with a block set from the late 1930s or early 1940s. The set has the clay blocks needed to build a bridge plus the instructions.

“To find something in the original box with graphics still intact is almost impossible to find for this age,” says Watts, of Elizabeth, North Carolina. “Kids play with stuff. They break it up. They lose the blocks. They lose the lid. This is all there.”

After a little negotiation, he bought the set. He’s hoping someone will build a bridge once it’s home.

For the kid within

“I like the older stuff, even before I was born,” he said.

He spotted some metal tanks and trucks and had to have them. He bought a bag of vehicles.

“I don’t even know what it is but it looked cool,” he says. “I’m seeking out stuff that I didn't have as a kid.”

Now this fleet will live on a shelf in his home in Bellmore, New York.

Skot Knox is pleased with the chairs he and his wife procured at the Lancaster Habitat ReStore.

I told my wife that I wanted to retire at my first opportunity. I had known people who worke…

When Joe Yurick was hiring employees for his JDog Junk Removal & Hauling franchise, he’d level with them.

Baking has been a popular pastime for years. Among Mom’s china or Grandma’s baking dishes, collectors find cooking collectibles to have good d…