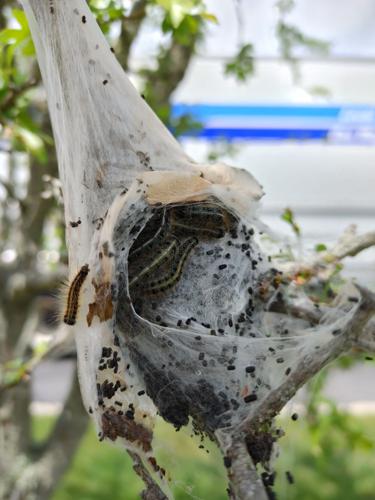 A tent caterpillar web. The web protects the caterpillars at night and at other times when the insects aren't feeding. 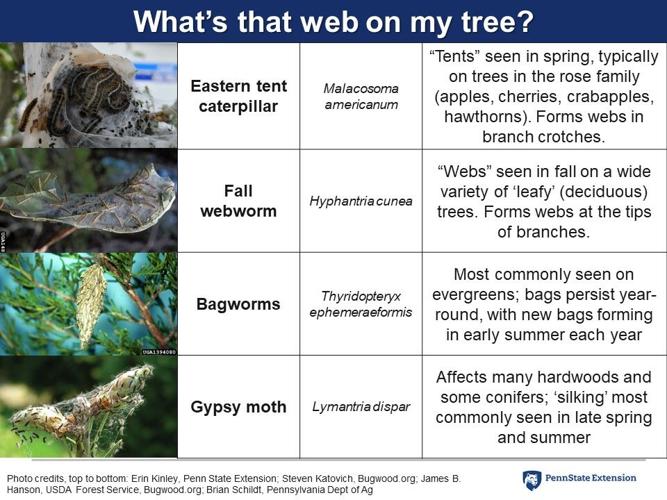 Tent caterpillars have been showing up everywhere, with large webs this spring in and around Chester County.

Are they dangerous at all, or just unsightly? How do you remove them?

People keep seeing large amounts of caterpillars in webs in trees around Chester County. What are they?

Are they in Lancaster County, too?

Yes, they are. They are across the state.

How large is the region they are found in?

They are found across the continental United States.

What species is in our area?

Eastern tent caterpillars, Malacosoma americanum, emerge from eggs and create tents in the spring. They will feed on leaves for 6-8 weeks before spinning cocoons, and emerging as moths in late June or July. The adults will lay eggs, which overwinter and hatch in the spring.

Sometimes these are confused with fall webworms, Hyphantria cunea, which is another native caterpillar or moth. These caterpillars create tents or webs in the fall on over 90 species but are commonly found on hickory, walnut, birch, cherry, and crabapple trees.

So you mentioned this but they are native to the area, correct?

I should say that we believe that they are native. We have records that go back to 1648 about them.

What is the purpose of large webs?

The webs protect the caterpillars, mainly at night but also at other times when they aren’t feeding. They will leave the webs to feed on the leaves and then return for protection. As the caterpillars grow, the tent will be enlarged.

What is their place in the ecosystem?

Various birds and other wildlife feed on the caterpillars.

Are there more tent caterpillars some years than others?

Yes. It seems that every seven to ten years, there will be a noticeable increase in the amount of Eastern Tent Caterpillars in a region.

Should people remove them?

That is a more difficult question. We recommend following Integrated Pest Management strategies (IPM). After correctly identifying a pest, the next step is to judge your tolerance levels of the pest. For me, I have Eastern Tent Caterpillars in my yard every year. They temporarily cause aesthetic damage to our black cherry and plum cherry trees but are soon not visible and the leaves grow back.

I appreciate that birds will feed on the caterpillars and feed them to their growing chicks.

I will continue this strategy with my mature trees but if I find Eastern Tent Caterpillars on the sapling American plum, Prunus americana, I will remove them as they do weaken a tree and my young tree may not recover as easily.

If people want to remove them, how should they do it?

The easiest way is to open the netting with a stick so that birds and other predators can easily reach the caterpillars. Some will likely survive but the local population will be greatly reduced.

There are chemical treatment options but those should be applied in April and only to ornamental trees. I have heard of homeowners using more aggressive methods but they risk permanently damaging their trees, which seems overkill for a temporary issue.

What if someone is having trouble identifying the caterpillar or wants to speak with someone directly about them?

That's an easy question. So all of our extension offices have master gardeners who are volunteers with horticultural needs for residents in that county. Each of those Master Gardener groups has a garden hotline that the volunteers will research questions and get back to homeowners with answers about anything related to horticulture from a weird bug they see to a soil question to something with a plant. You can contact your county’s hotline by emailing the county followed by mg @psu.edu so for Chester County that is chestermg@psu.edu.

Will cicadas swarm Pennsylvania in 2022?

Will cicadas swarm Pennsylvania in 2022?

The most unique logo in craft beer was made in Lancaster

The design won a platinum crushie in the 2022 Craft Beer Marketing Awards.

“Get Organized with The Home Edit” has been a vicarious way to watch how spaces can be transformed with some shelves and the perfect containers.

Wild hydrangeas, plants native to the U.S., shouldn’t be overlooked.

Visit 21 private gardens on these June tours in Lancaster County

Here are three tours to see gardens at private homes (and a few businesses) throughout Lancaster County.

Philadelphia Flower Show blooms outdoors again starting today: Where it is and how to get tickets

The Philadelphia Flower Show will bloom outdoors again for the second time in its nearly 200-year history.

Make a glass-blown planter, find a garden tour: 68 things for plant lovers to try in June

Here’s a roundup of garden events in the Lancaster County region this June.

Poison hemlock is commonly found around central Pennsylvania. Here's what you need to know about the plant

Poison hemlock is a common plant found throughout central Pennsylvania and beyond.

The Penn State Extension is offering a series of home food preservation webinars through the summer and fall.