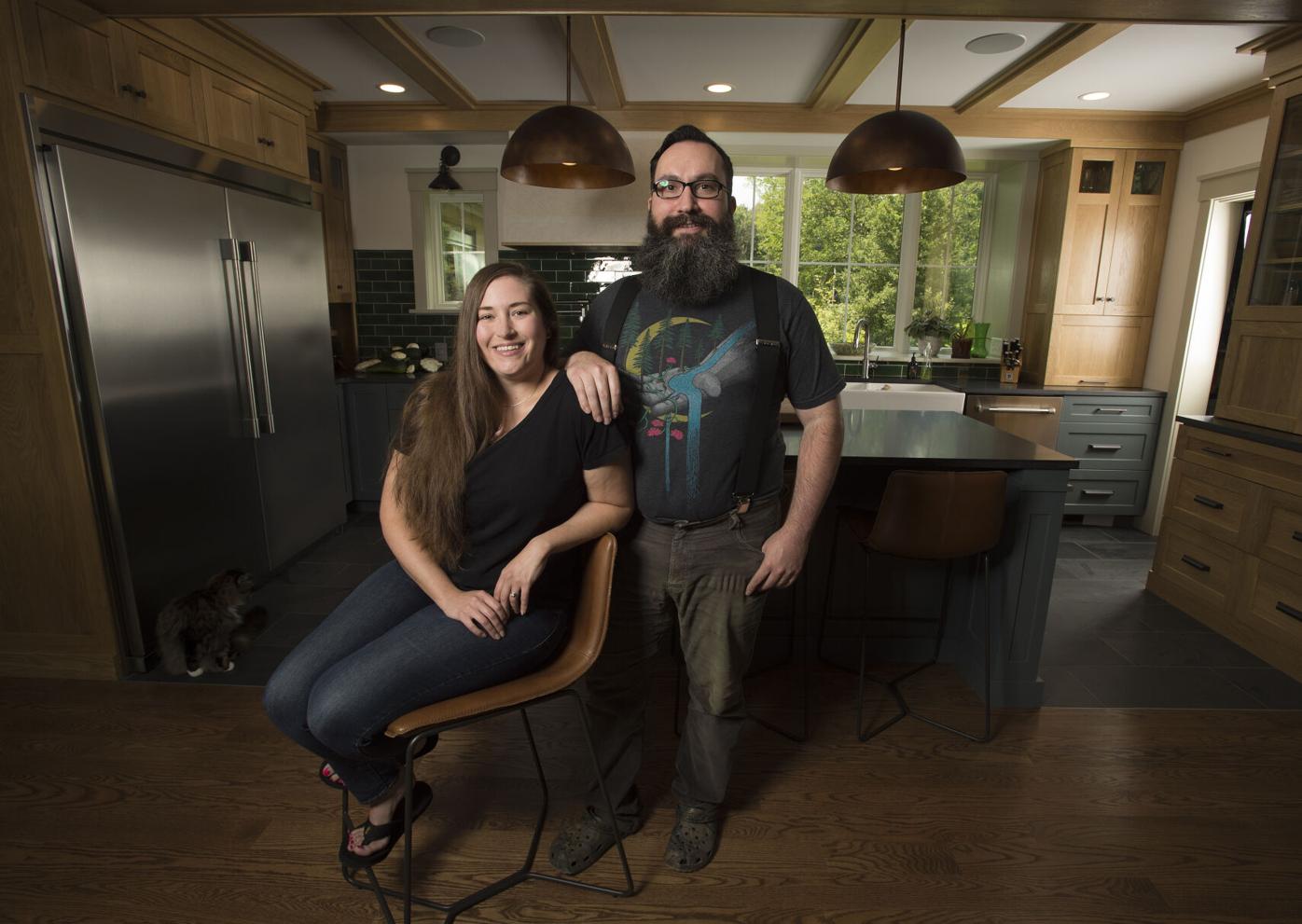 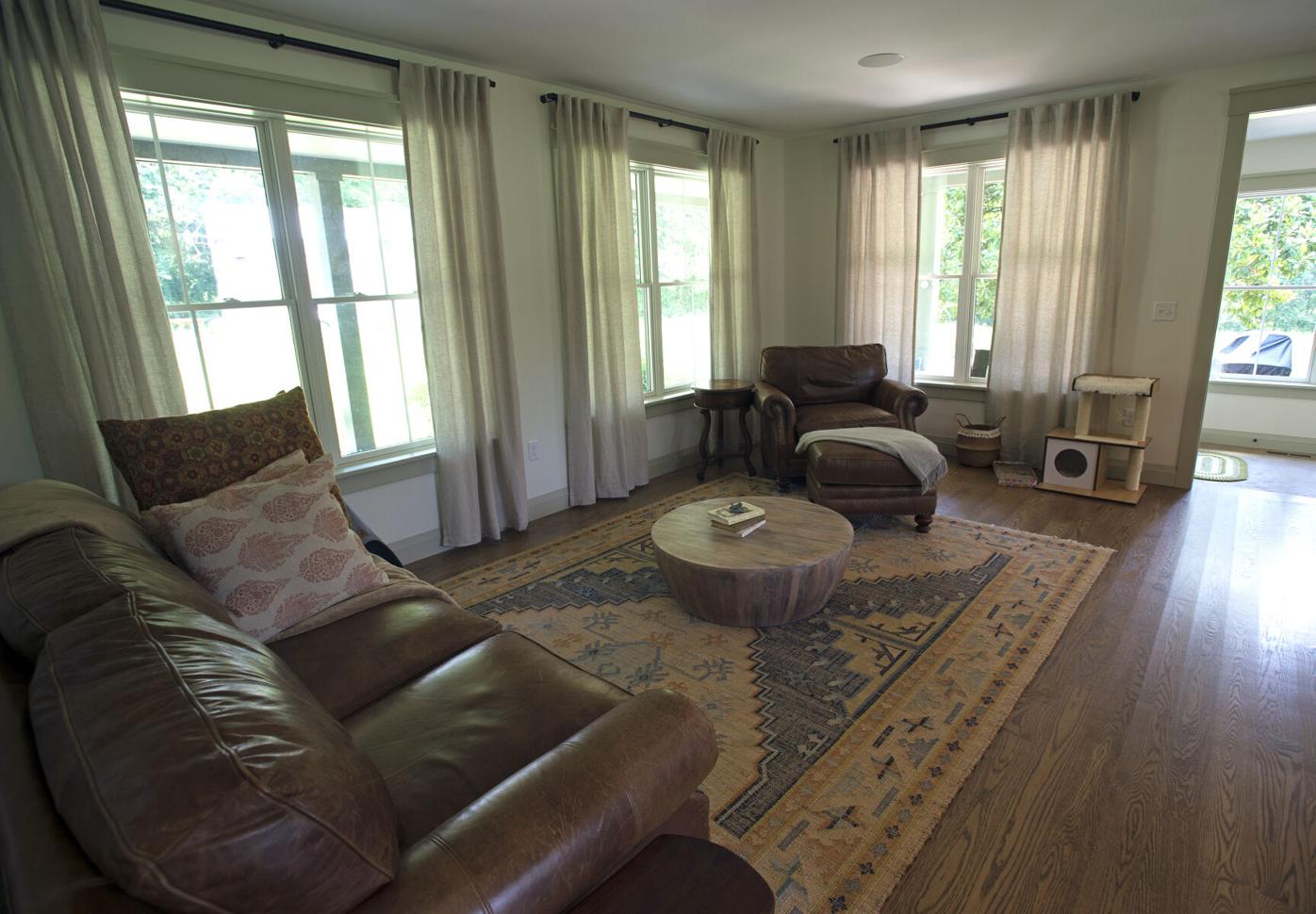 The living room has lots of windows overlooking the native plant beds outside and wildlife. 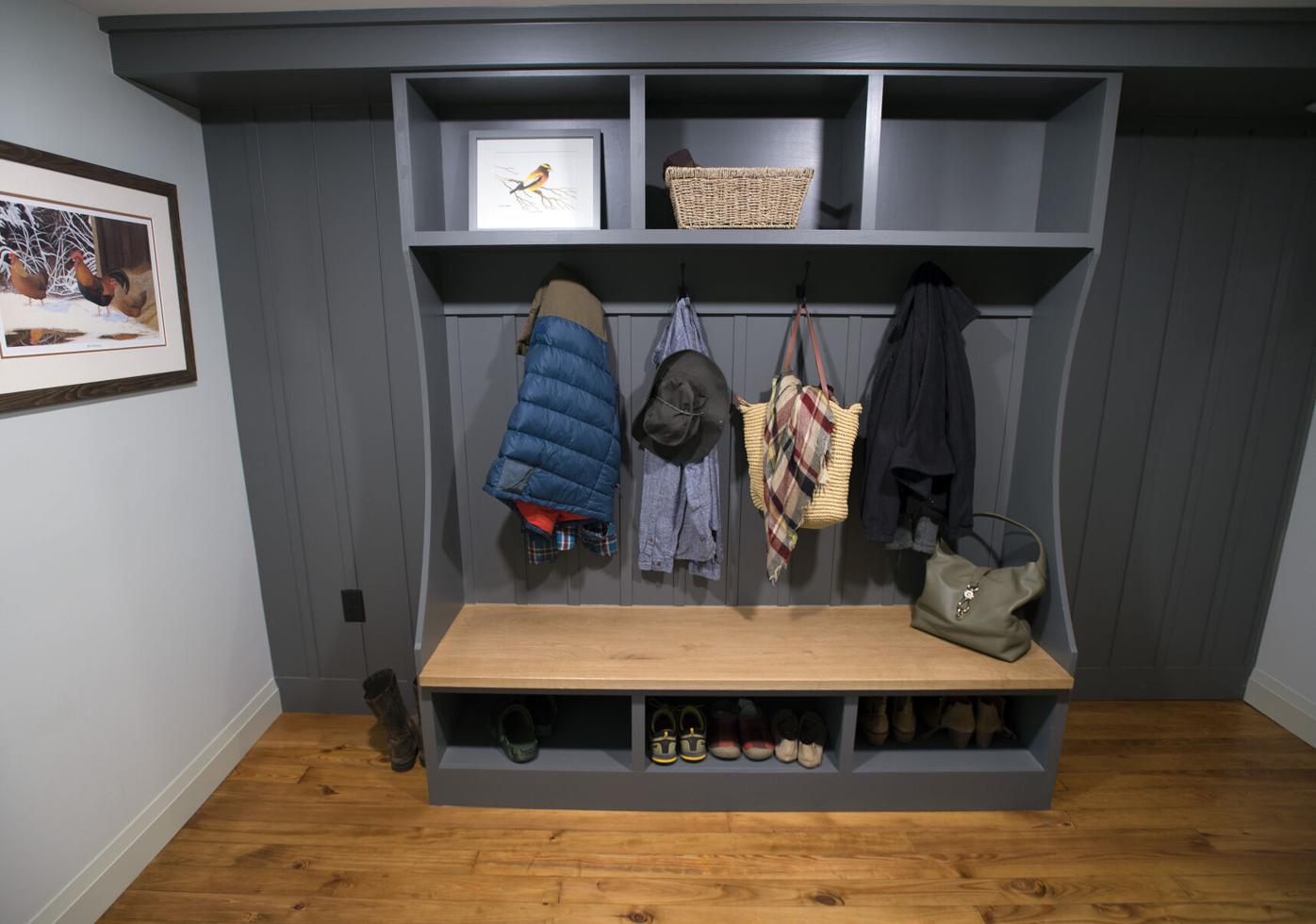 A mud room was added in the original section of the house with a secret door to the library on the right. 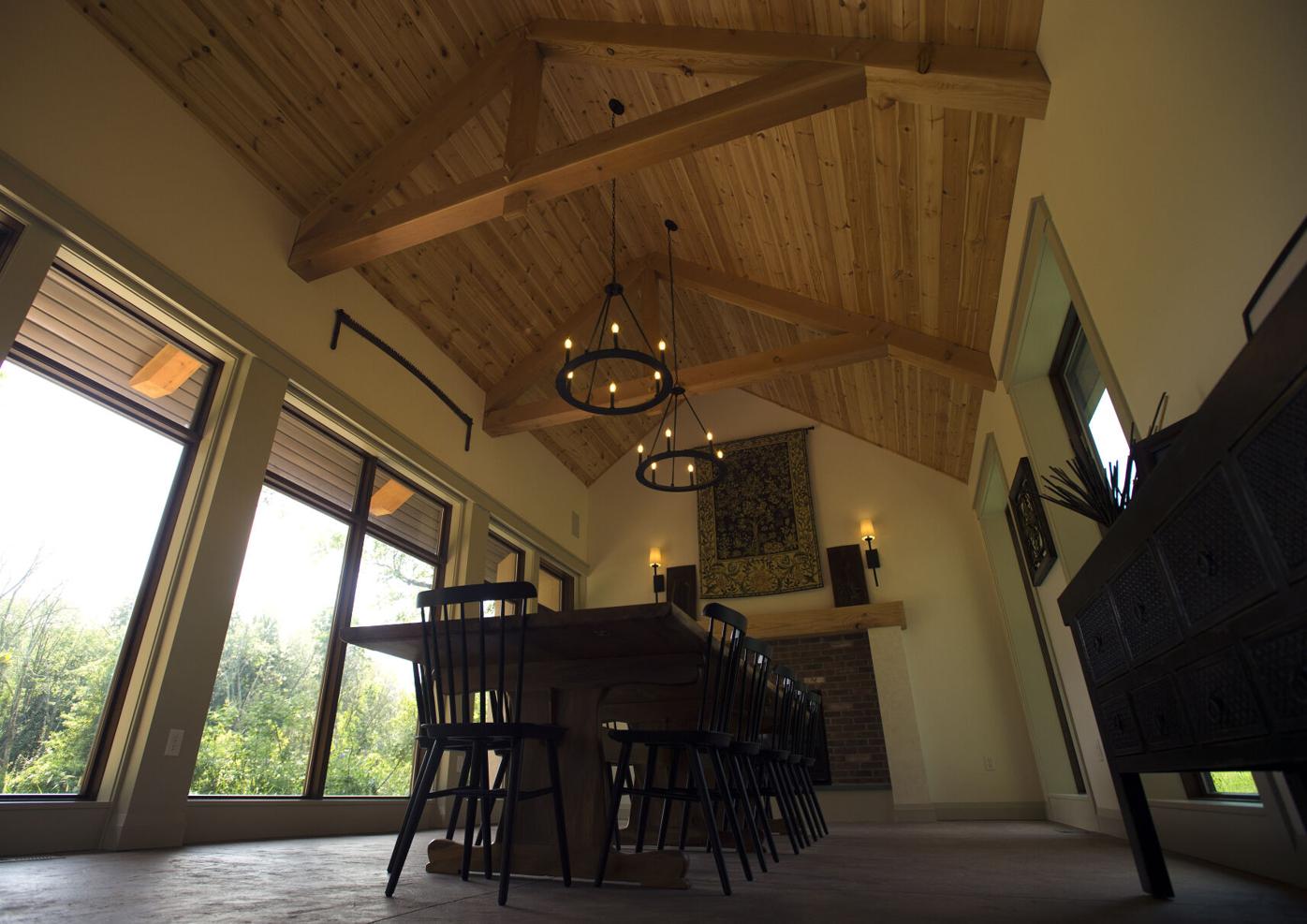 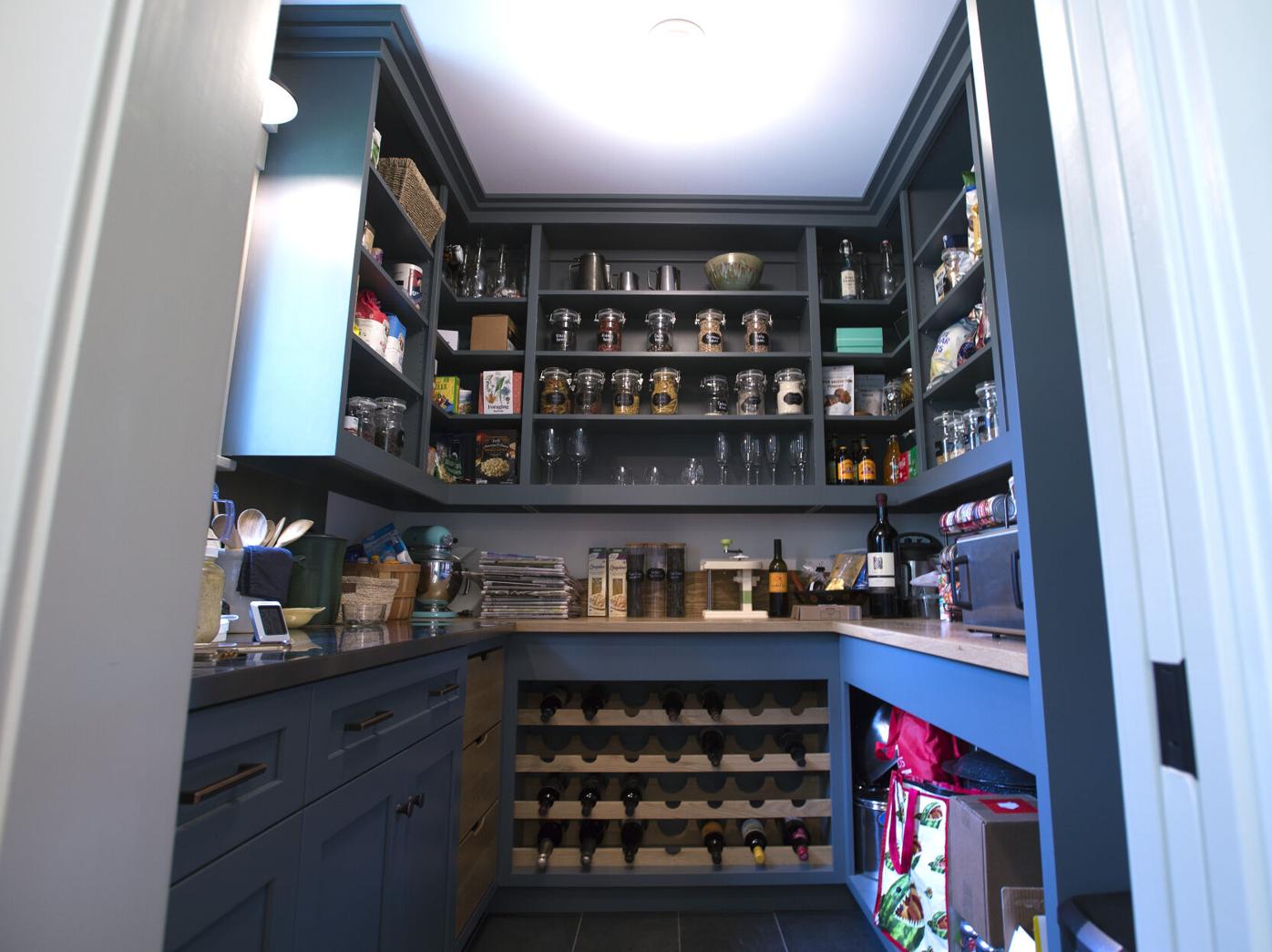 The pantry has a fermentation area on the left. 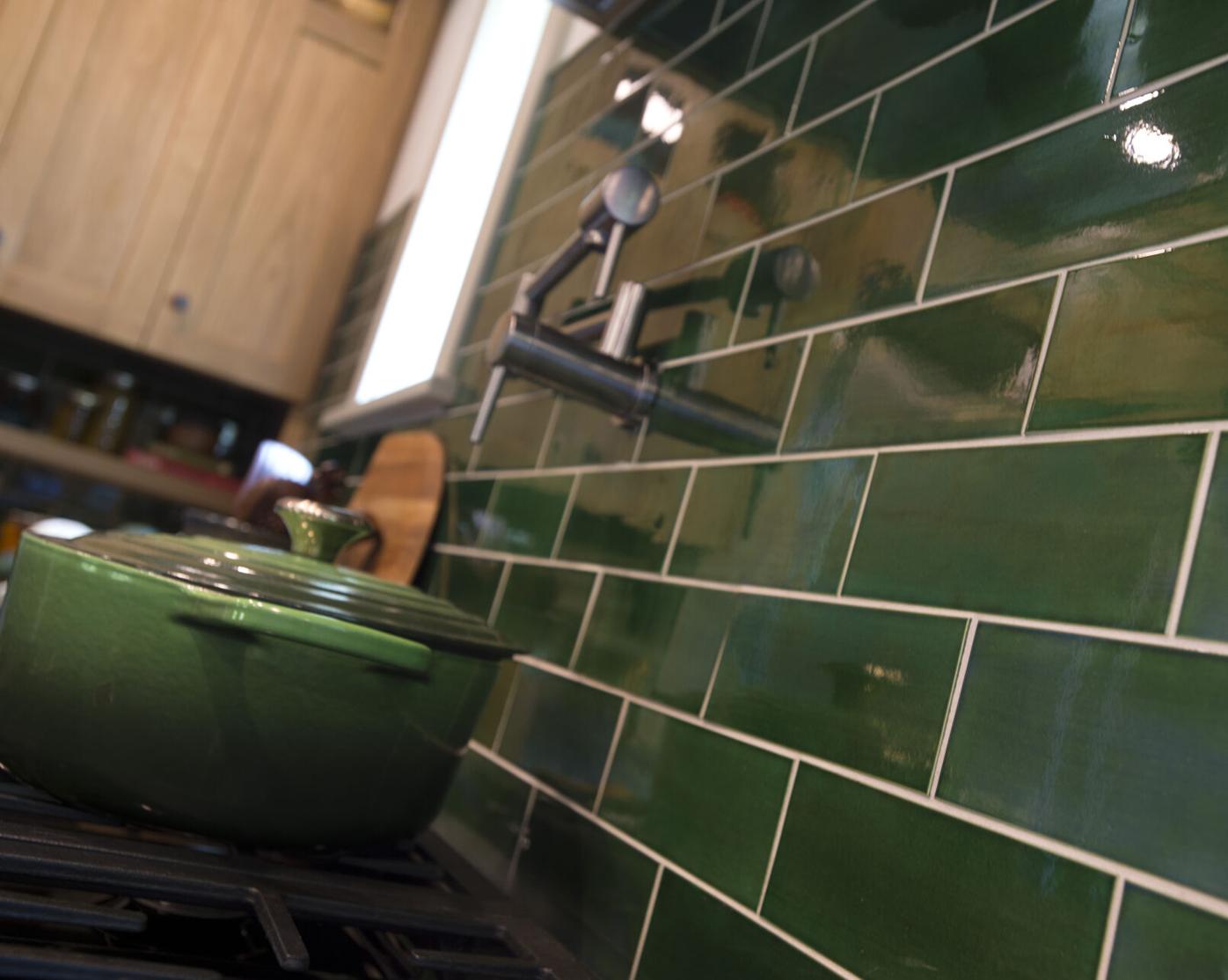 Katrina and Joe Devine love the green tile back splash in their renovated farm house. 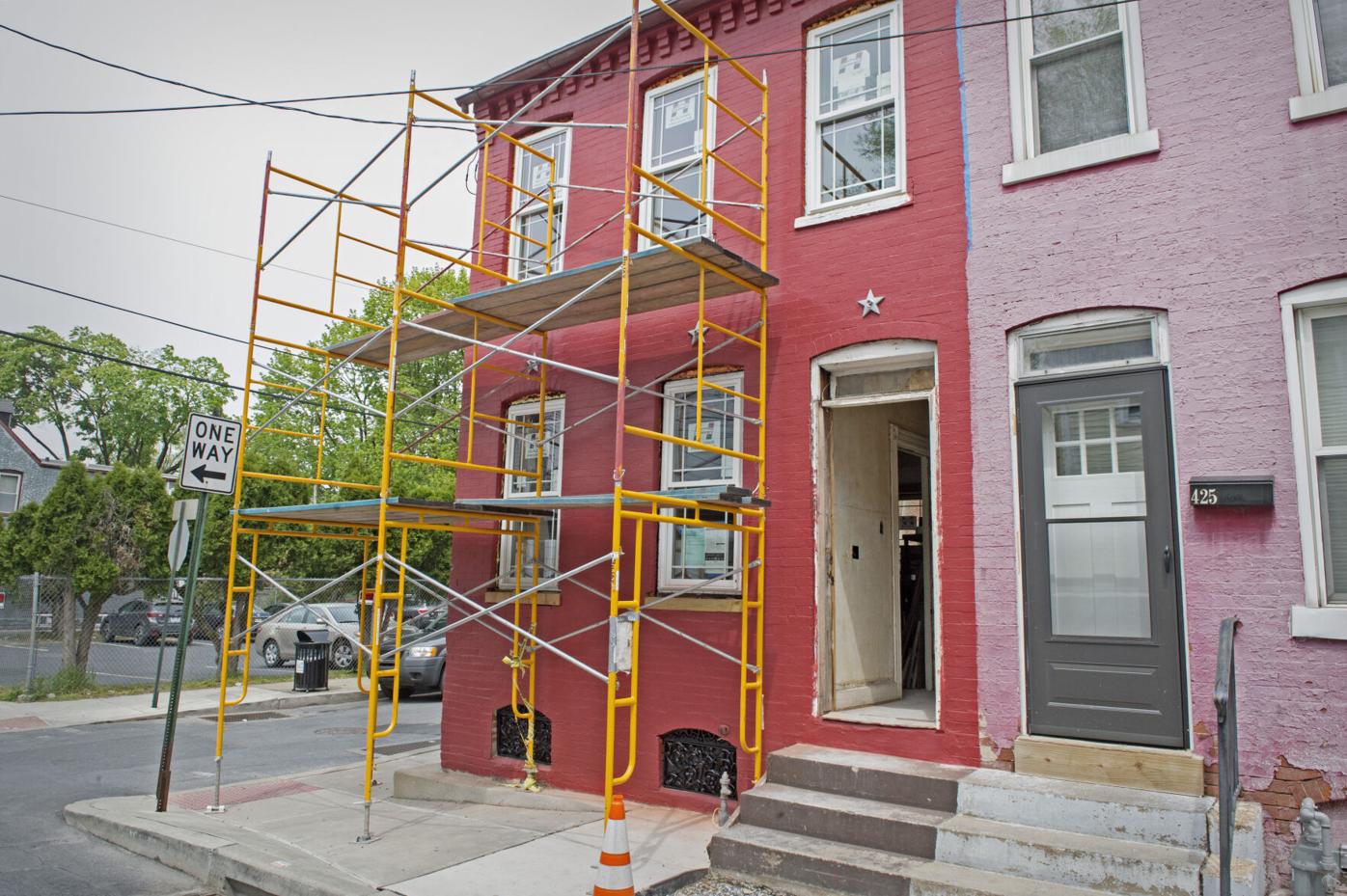 The renovation for this Habitat for Humanity house on Strawberry Street in Lancaster is almost finished.

The farm outside of Schoeneck had been in Katrina Devine’s family for three generations.

She and her boyfriend Joe went there as a weekend getaway from their home in Lancaster. Later, they came to the farm for their wedding, and all along, they believed this was meant to be their forever home.

One problem? The farmhouse.

“It was a house built to be out in the fields and ultimately you were sleeping in it,” Joe says. “And that’s about it.”

The tiny rooms and lack of modern conveniences just didn’t cut it, especially for a couple who worked from home.

An extensive renovation changed that by adding a dining room they call the “Viking hall,” a kitchen overlooking the land and modern updates like a whole house audio system. The dramatic transformation will be part of Lancaster Lebanon Habitat for Humanity’s Renovators’ Home Tour. The annual tour is virtual for a second year with a look at seven homes in the area. The tour goes live Saturday, Aug. 28 as a fundraiser for the nonprofit that’s renovating affordable homes for local families.

After a break during the pandemic shutdown, Habitat’s local construction sites are busy. Over the past year, crews finished renovating two homes in Lancaster, says Andrew Szalay, executive director of the local Habitat affiliate. In Lancaster, work is wrapping up on a home renovation in the 400 block of East Strawberry Street in partnership with Thrivent Financial.

Next up are two renovations in Lancaster: one on Howard Avenue (with Highland Presbyterian Church) and one on South Lime Street.

Proceeds for the 2021 renovators tour will go to the Lime Street home overhaul, earmarked for a single mother and her three children, Szalay says.

Habitat homes are sold to families who meet income guidelines and other qualifications. Once accepted, a single head of household must spend 250 hours volunteering and taking financial education and home-maintenance classes.

The Devines joined the tour thanks to their project architect, Charlie Yohe, of Capstone Design + Build. Yohe’s been involved with the tour since it started six years ago.

The home has been in Katrina’s family since the 1930s when her grandmother, Treva Greblunas, purchased the property. Her mother moved in and later, Katrina’s mother, Nannette Longenecker, grew up there. The Devines researched the house’s history with the help of the Historical Society of Cocalico Valley and learned it was built before 1840.

Their construction project geared up after they got married here in 2019. Construction started in October 2020, and they were able to move in with their two cats and a chinchilla in March.

Katrina describes the renovation as pushing the reset button on a house that hadn’t been updated since the 1940s.

“We want it to continue to stand for another 200 years,” she says.

Before the overhaul, many of the rooms had one electrical outlet. That wouldn’t fly, especially with both working from home. Katrina, 36, is a scientist. Joe, 41, works in technology.

The new plumbing, electric, heating and cooling systems aren’t visible, but they make the home more comfortable, along with the voice-activated audio system.

A kitchen for preserving

The kitchen is one of their favorite rooms in the house. Both Katrina and Joe love gardening and have won premiums at the New Holland Farmers Fair for their canned goods.

The kitchen has pot filler next to the stove to make it easy to fill the large canning pots. A few steps away in the pantry is a fermentation station for things like sauerkraut. The fridge-freezer is split 50-50 to make room for the bounty they freeze.

Another highlight is deep green-tiled backsplash: Vermont pine tiles from Mercury Mosaics. Joe and Katrina love green and fought for different shades throughout the house.

Around the corner is a dining room with a tall ceiling and stamped concrete floors with radiant heat. In between is a 12-foot table made by Jonathan Colon, a Lancaster woodworker, and a fireplace. Tall windows with automatic shades reveal the landscape and wildlife.

They call it the Viking hall: a space that’s grand, unique, rustic and big enough for entertaining.

Elsewhere throughout the home, there are details like a secret door to the office and a steam shower with a rainbow of light settings. There’s also space for furniture that’s been in this home for generations.

Outside is a living renovation: remediation with a focus on sustainability and conservation. The Devines still have the garden and have big ideas about regenerative farming, woodland management and native plants.

The Porches & Posies Garden Tour includes 12 gardens throughout the southern end of the county.

Tour 8 gardens in Marietta, including this one with buried treasure [photos]

What: This virtual home tour will explore six renovated homes in Lancaster County plus a Habitat for Humanity home.

Cost: Free. Donations are accepted to support the renovation of a home via Lancaster Lebanon Habitat for Humanity.

When: Saturday, Aug. 28. The tour starts online at 7 p.m. The preshow starts at 6:30 p.m. with a mixology tutorial from Decades Lancaster. Afterwards, the show will be on Lancaster Lebanon Habitat for Humanity’s YouTube page.

How to help: Habitat for Humanity needs volunteers at construction sites and at the ReStore. Learn more at Lancasterlebanonhabitat.org.