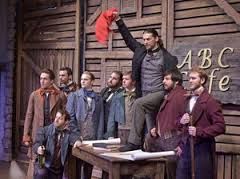 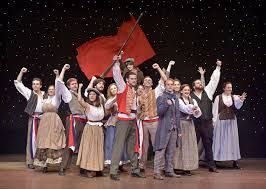 “Les Miserables”is a huge show told over a vast canvas of time and space. How could it not be, it’s based on a thousand-plus-page epic novel by Victor Hugo?

Revolution’s in the air, men and woman are beaten down, hearts are broken, people die and redemption is found.

And this vast, sweeping story is all sung over the course of 2 hours and 45 minutes.

So how does it play at the Dutch Apple Dinner Theatre?

You can thank the glorious voices of the strong cast, from Jacob Waid, who plays Jean Valjean to Kaitlyn Wise, who played the young Cosette and sings a lovely version of “Castle on a Cloud.”

Sometimes, when actors harmonized or sang the numerous polyphonic numbers in the show, I got goosebumps, it was that beautiful.

This is not the most glamorous “Les Miserables” you will ever see. The stage is small and the set, designed by Robert Andrew Kovach, is serviceable but not spectacular.

Valjean always seems to be bumping into his mimesis, Javert (A very fine Adam Clough), but I have seen that problem in productions of “Les Miserables” at larger theaters before.

Valjean is a prisoner as the story begins. He’s served 19 years for stealing a loaf of bread for his sister’s child.

Javert tells him he is paroled, but not free. He will, in Javert’s eyes, always be a criminal.

When he is befriended by a priest(Frank Hughes) Valjean realizes he can choose to lead a good life and does just that.

Eight years pass and he becomes the mayor of of a small town and owner of a factory.

He meets Fantine (Amanda Kuchinksi) who is bullied by others at the factory because she has a child. Unbeknownst to Valjean, Fantine has been fired and is forced to cut her hair and then work as a prostitute to support her daughter, Cosette, who is being taken care of by the odious but awfully funny Thenardiers (Andrea Spencer Christensen and John Anker Bow, both excellent). They have a child of their own, Eponine.

When Fantine dies, Valjean pays off the greedy couple, takes Cosette in and raises her as his own.

Years pass, Valjean moves to Paris with a now grown Cosette (a fine Teresa Witt) who falls instantly in love with a student involved in the revolutionary movement, Marius (a strong Nick Lerew). All they need is to bump into each other and it’s love.

But Eponine (a luminous Maya Naff), now grown herself, is deeply in Love with Marius. He only has eyes for Cosette and asks Eponine to help find her for him. Naff’s heartbreake was nicely played.

The barricade scene, in which the students fight a losing battle against the police, is done well, with lots of lights flashing as the bullets fly. Of course it could use more soldiers, but it’s fairly convincing.

The rebellion is squashed, many die and gloom falls over Paris. But Valjean’s heroics save Marius and bring his daughter great joy.

Director Brian Enzman has cast the show beautifully and keeps the action moving along nicely.

The small orchestra, led by J.P. Meyer, sounds strong and full. Good thing too, because it has to match the glorious voices.