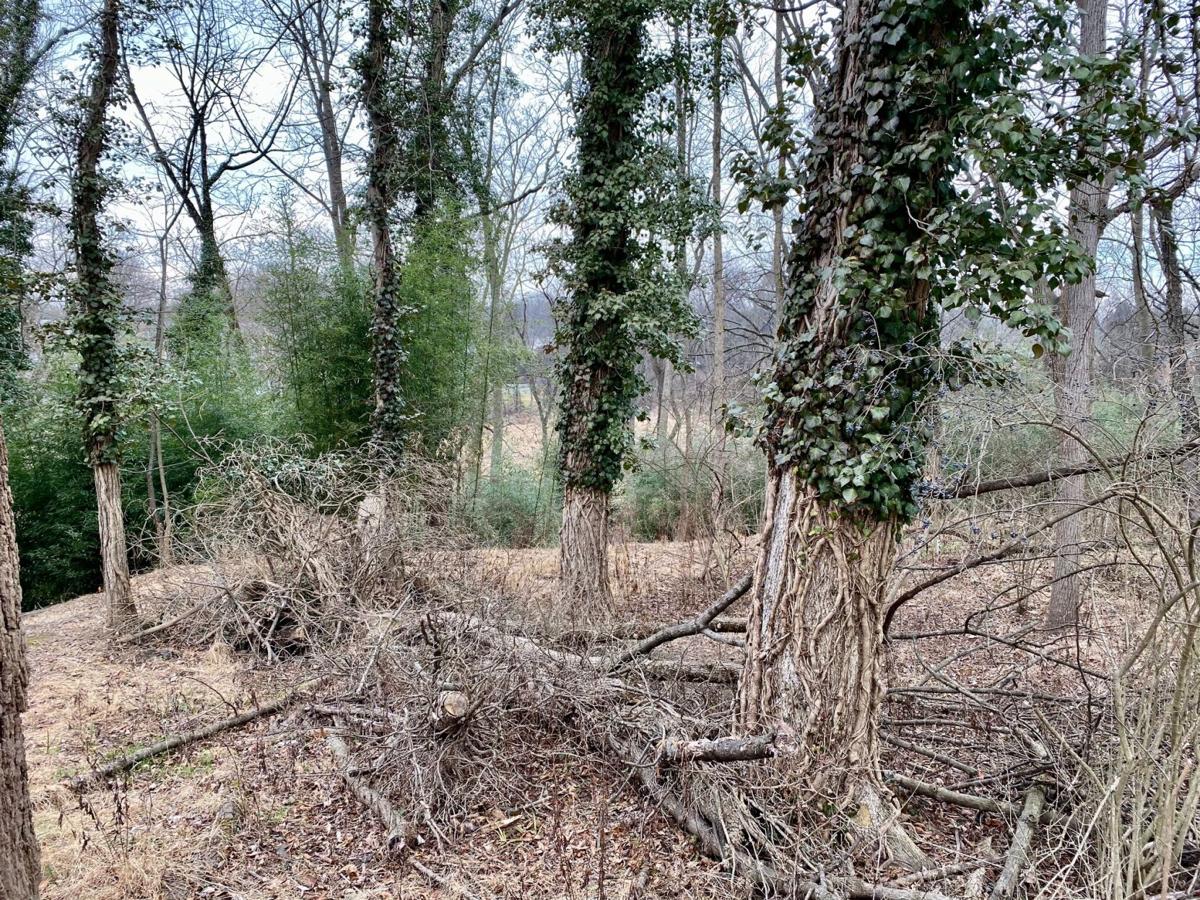 These trees covered in English ivy show the browse line revealing how high deer can reach to nibble on the leaves. 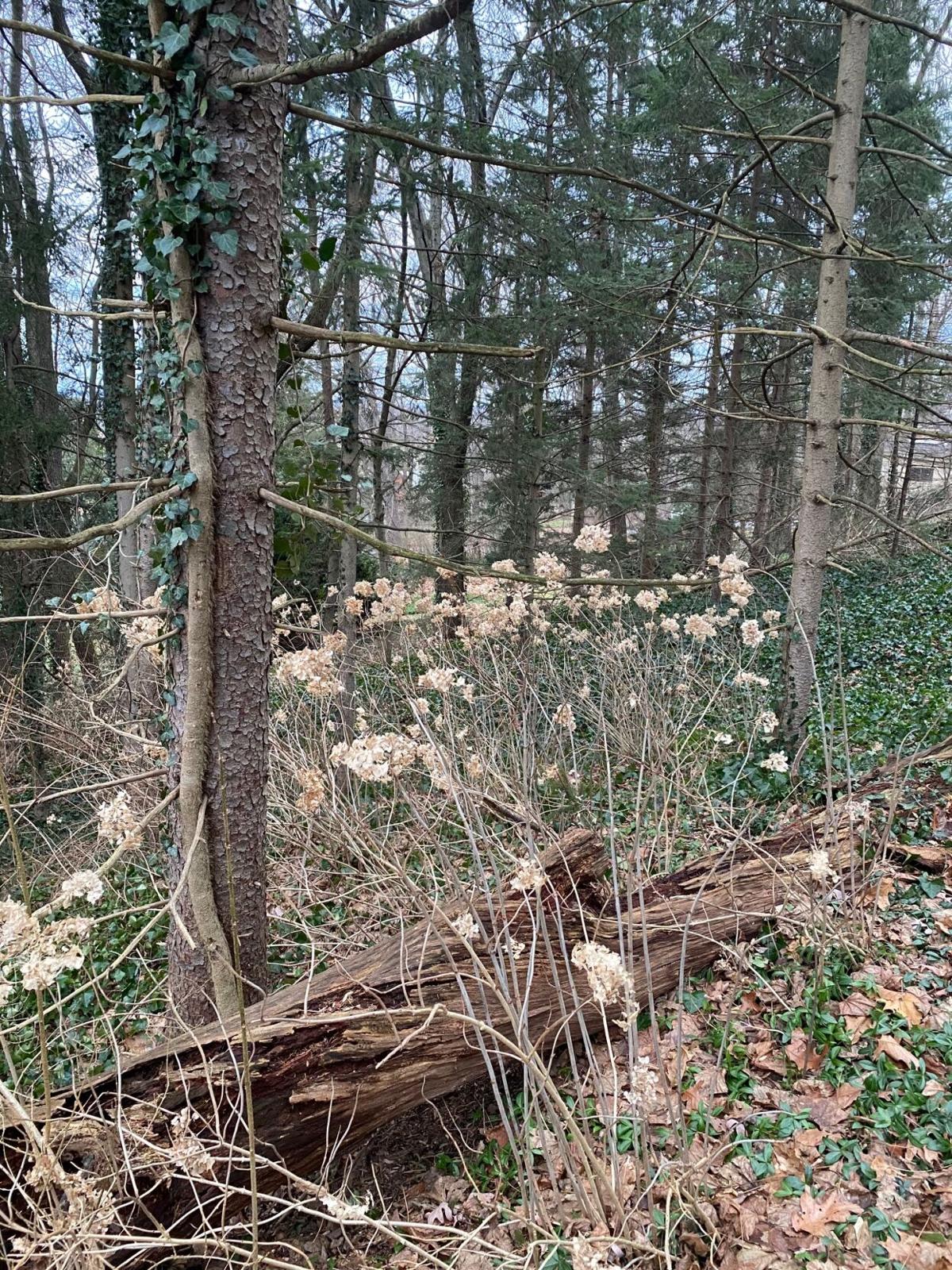 Competition for resources and light is fierce in woodlands. This parasitic vine is using a young tree as a prop, which will likely kill it over time. 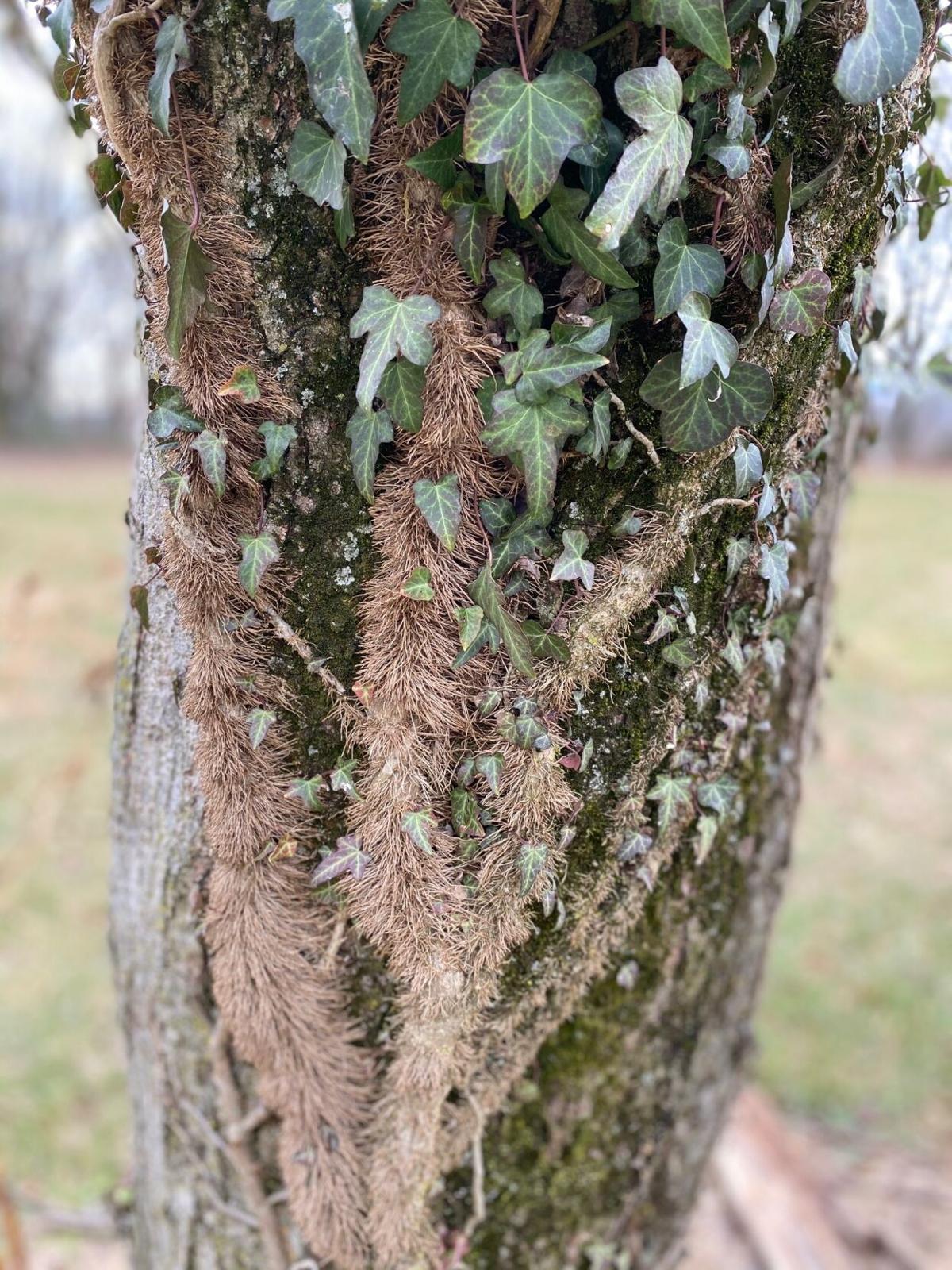 As it latches onto a tree and climbs upwards, English ivy grows root hairs that help it adhere to crevices in the tree. 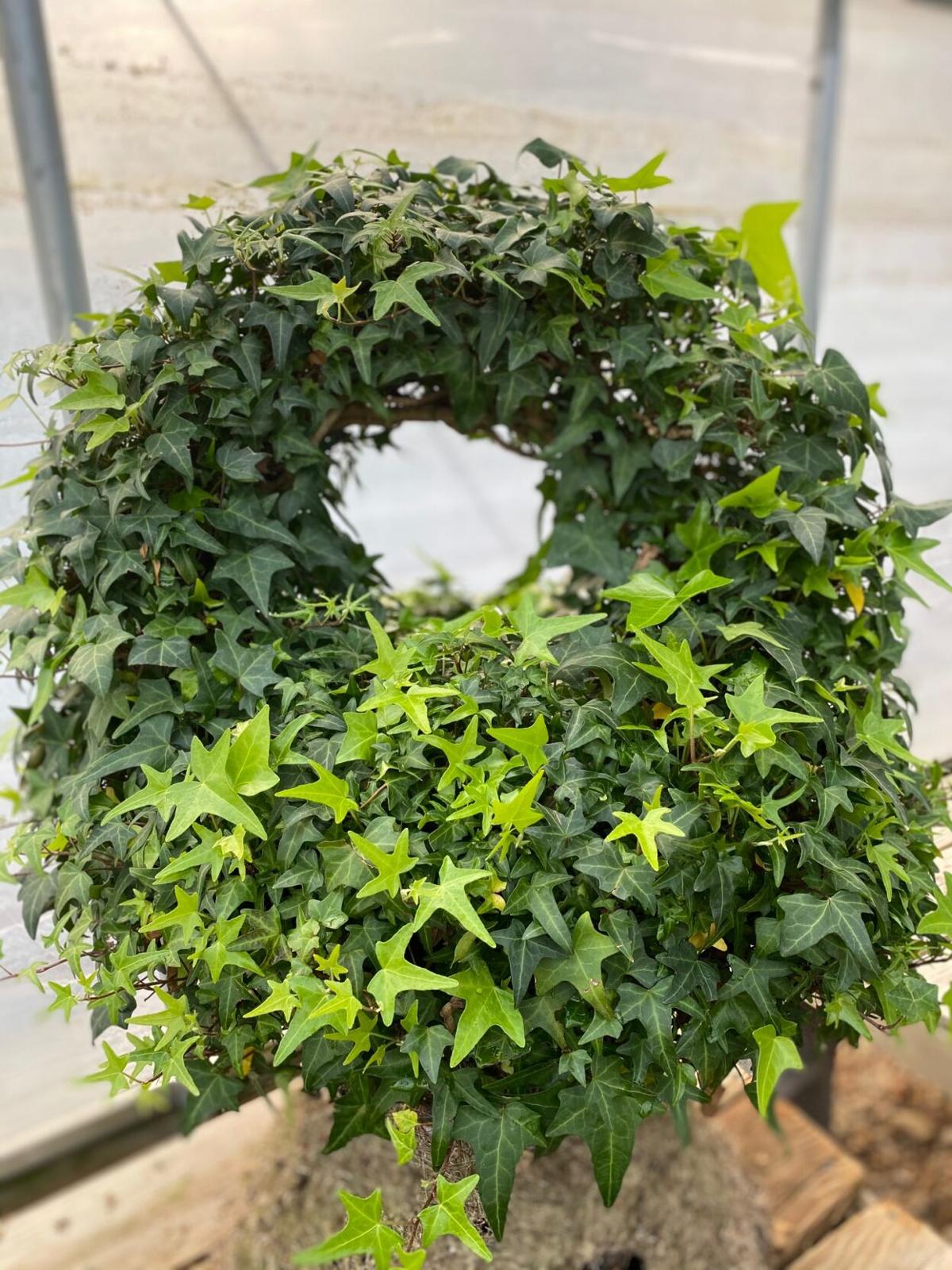 While many consider English ivy unruly, it is also trainable both indoors and outdoors, making it a popular choice for garden containers and topiaries.

These trees covered in English ivy show the browse line revealing how high deer can reach to nibble on the leaves.

Competition for resources and light is fierce in woodlands. This parasitic vine is using a young tree as a prop, which will likely kill it over time.

As it latches onto a tree and climbs upwards, English ivy grows root hairs that help it adhere to crevices in the tree.

While many consider English ivy unruly, it is also trainable both indoors and outdoors, making it a popular choice for garden containers and topiaries.

Many people are irresistibly drawn to green spaces. Whether it’s “forest bathing” in wooded areas, marveling at manicured gardens, or crawling along home flower beds weeding and dead-heading, there are countless botanical wonders to behold. But all too often there is a sinister threat to these bucolic scenes: non-native invasive species.

According to LandScope America, over 285 invasive plant species are impacting Pennsylvania, threatening natural habitats and potentially causing harm to wildlife, economies and human health. Invasive plants reproduce rapidly, outcompete native species for resources, and have few if any natural controls to keep their populations down.

Often, these plants are less nutritious (or noxious) for animals, altering the food web and starving out the locals. Perhaps most vexing is that people continue to aid and abet these alien species by choosing plants based on their aesthetic appeal and growth habit regardless of where they came from.

Invasive species have directly contributed to the decline of 42% of threatened and endangered species in the U.S.

A stroll through nearly any neighborhood or greenspace in Lancaster (and beyond) reveals a ubiquitous non-native plant: English ivy (Hedera helix).

“Its juvenile habit is effective ground cover but the ivy’s adult habit can reach 100 feet in height, often up trees, as it flowers and seeds,” explained David Kantner, landscape horticulturist and arborist at the Conestoga House and Gardens.

English Ivy is evergreen and perennial, meaning it remains green and functional through more than one growing season. While its leaves may die back in the colder months, it often survives the winter and produces new leaves when the weather warms, according to Penn State Extension.

Some people may appreciate the added lush, evergreen foliage on trees, once draped in ivy. But it can make some routine garden maintenance more difficult.

“It is difficult to inspect the tree for health issues, insects can gain entry to the bark, and rodents have protection while chewing on the root flair of the tree,” Kantner said. “Slow-growing trees like dogwoods can get completely outcompeted by ivy.”

“Once on a tree, it causes decay as the ivy gets moisture from the bark,” Rubio said. “The tree dies off over time.”

Further ensuring its invasive status, English ivy sends out creeping runners and birds disperse the seeds after eating the berries, so even when corralled in a yard, the ivy can be transported to wild spaces.

Shrouding walls, poles, trees and structures, English ivy is adaptive and persistent, “growing two to three feet per year” Kantner said. “English ivy intercepts water and nutrients from trees, and latches onto tree trunks with tiny rootlets.” Nothing will stop this phototropic plant climbing toward the sun, except pruners.

Ivy-covered branches create shade that prevents photosynthesis from occurring in the tree’s foliage.

“The extra weight of ivy can snap off branches and weaken the tree,” Rubio said. This can be hazardous, as it can make the tree more susceptible to blowing over in a storm.

English ivy also has been confirmed as a reservoir for bacterial leaf scorch (Xylella fastidiosa), a harmful plant pathogen that affects a wide variety of native and ornamental trees such as elms, oaks and maples, according to Penn State Extension. That’s a lot of incentive to sharpen your pruners.

While many have a love/hate relationship with English ivy, it’s not all gloom and doom for fans of this plant. As Kantner noted, English ivy is “invasive, with utility.” For instance, plain walls get a softer look blanketed in English ivy.

“It is a great stabilizer of soil on hillsides, requiring little upkeep, though it will shade out bulbs and other plants trying to emerge,” he said.

This ivy can be trained to grow in shapes and it makes a reliable topiary plant. But Kantner also noted that thriving English ivy “can grow dense enough to harbor voles and mice,” and deer browse on the leaves, leaving the robust vines intact.

However, Rubio says English ivy is not as difficult as some other plants to remove. As a landscape and tree service expert, he is more concerned with poison oak, which also creeps up trees.

“It causes more damage to the trees than English ivy, and it is more difficult to remove because many people have an allergic reaction to it,” Rubio said.

Pruners, loppers, or a hand saw (taking care not to injure the tree bark) can disable the ivy with a few cuts: one at ground level, and another cut a few feet higher. This “window cut” ensures the pretty but pesky plant will not reestablish on its host. Gently remove the cut section, but leave the rest of the ivy to die back on the tree (leaves wilt and turn brown), as ripping the vines off the bark can harm the tree. Where English ivy is used as ground cover, Kantner suggested using a spade or shovel to reinforce the ivy’s boundary.

English ivy’s destruction of native biodiversity is no secret, but gardeners need not despair . There are beautiful alternatives that wildlife — and hopefully, you — will appreciate.

Vibrant ground-huggers include Allegheny spurge (Pachysandra procumbens), shrub yellowroot (Xanthorhiza simplicissima) and Virginia creeper (Hexastylis virginica) among others. Consult your local nursery experts to get the best fit for your space, light, and soil type.

Everyone with access to a patch of earth can help heal fractured habitat by choosing native plants and growing a sustainable foundation for wildlife — and ourselves.

Additional resources may be found at:

There are dozens of classes to check out, online and in-person throughout February.

Antique toolbox: Can you identify this vintage tool from Landis Valley Museum?

Winter may be a period of rest in the field, but Trish Snyder’s still busy, making sure a variety of flowers bloom through the coming year at Flourish Flowers.

Each season reveals a different kind of forest beauty, but it is being overrun with non-native invasive plant species. Fortunately, Manheim Township and Land Studies have been carrying out much-needed habitat restoration, removing a plethora of invasive species to make room for native plants that can support the local ecosystem.

Nick Myers, Land Studies supervisor said the past year has been “the initial attack” on the invaders, which include: burning bush, Japanese honeysuckle, multiflora rose, Oriental bittersweet (”One of the largest specimens I have ever seen!”), Japanese knotweed, tree of heaven, wineberry “delicious but invasive”), mile-a-minute vine and of course, English ivy.

Myers cautioned that “even if a non-native plant doesn't spread in your yard, birds can still disperse the seeds to natural habitats” like Landis Woods. He is encouraged that “through education, consumers can connect with native alternatives with features they want in plants, like size, color and leaves.”

When asked about a useful resource for gardeners, Myers said, “People have told me that the book ‘Bringing Nature Home’ was life changing for them.”