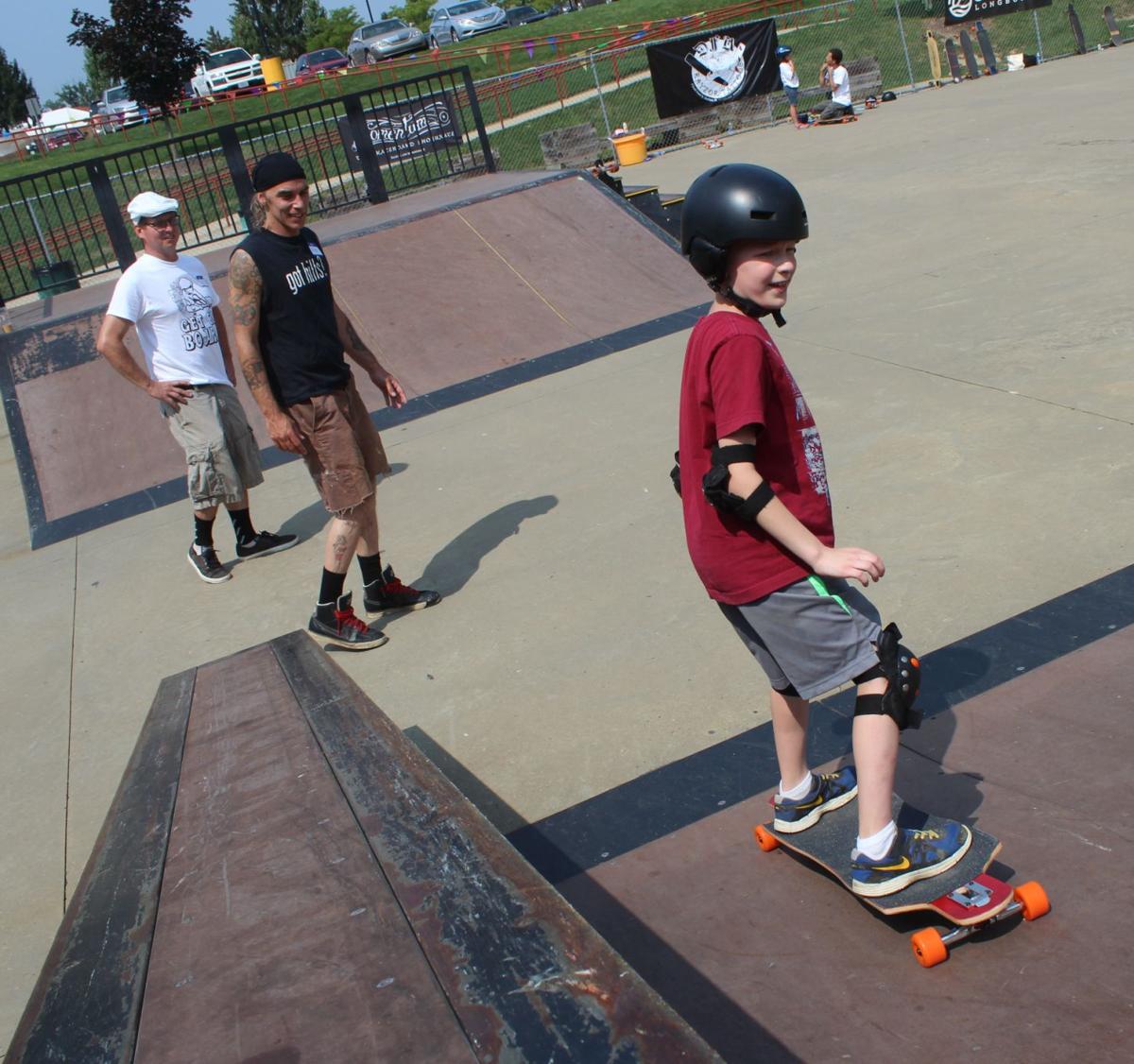 Gary Dutson, left, and Ray Young watch a young skateboarder learn his way around the ramps at a Get on Board event. 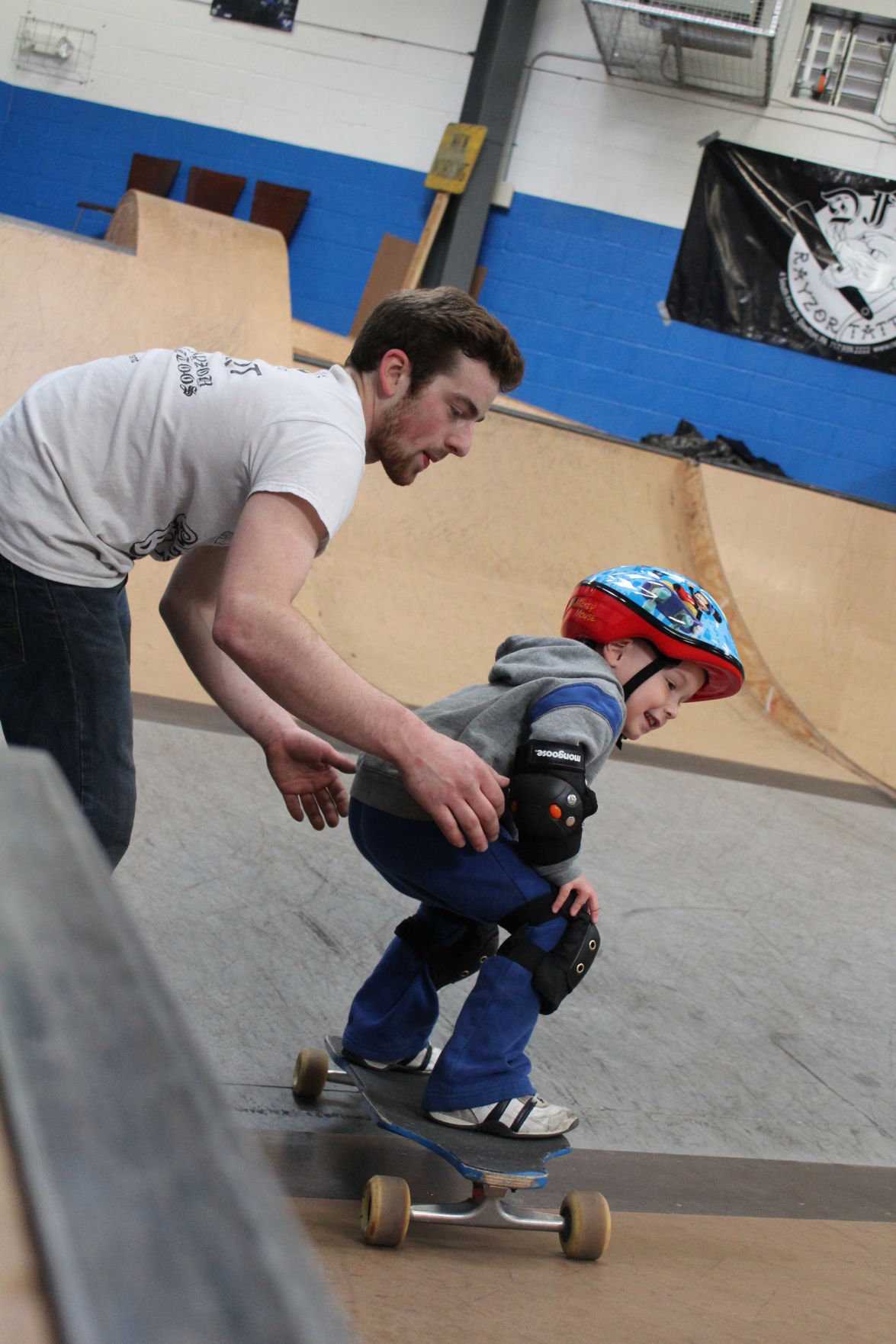 A participant skates down a ramp with support from Avery Stauffer. 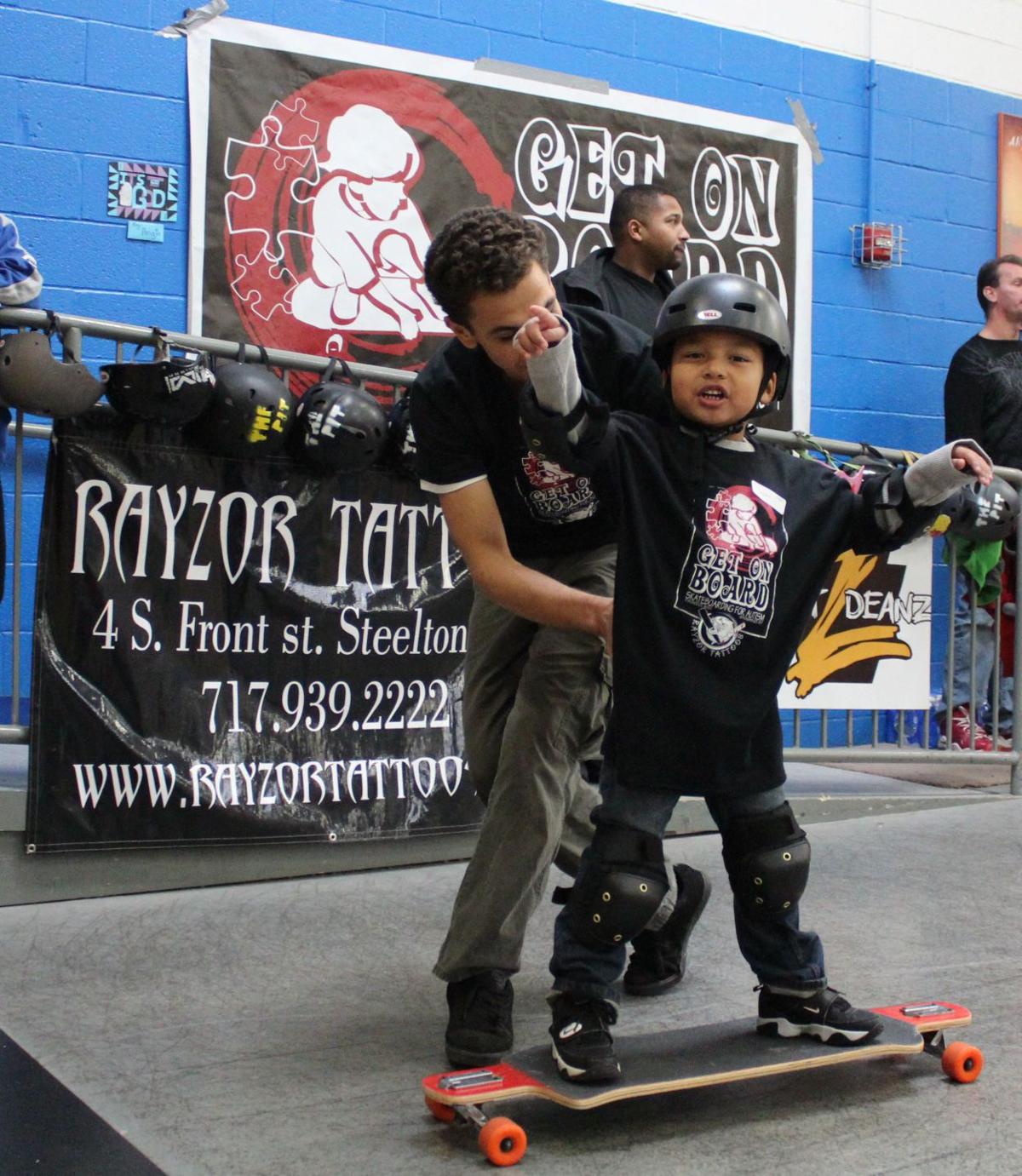 Darryll Hickey spots a skateboarder at a Get on Board event.

Gary Dutson, left, and Ray Young watch a young skateboarder learn his way around the ramps at a Get on Board event.

A participant skates down a ramp with support from Avery Stauffer.

Darryll Hickey spots a skateboarder at a Get on Board event.

“You get on this thing, and there’s a higher percentage of chance that you’re going to fall down than there is you’re not going to fall down,” says Nathan DeMuro, master instructor of the Get on Board program.

“For a lot of people, that’s very defeating.”

But not for participants in Get on Board, a program that empowers children with autism and special needs by teaching them how to skate — for free.

The nonprofit organization is led by Ray Young, who in 30 years has taught thousands of students how to skate.

Young skated at the semiprofessional level in the 1980s before studying art education at Millersville University and teaching at multiple skate camps. He was inspired to start Get on Board while searching for events for a friend’s son with autism.

Through Get on Board, Young and his team of experienced instructors teach children at events in York, Mechanicsburg and beyond.

And participants learn far more than kickflips and ollies.

The program launched in April 2012 with help from a Harrisburg art show featuring painted skateboards.

Tattoo artists Steve Skelly and Chad Divel were instrumental in organizing it, with initial funding coming from Young’s Steelton tattoo shop, Rayzor Tattoos, as well as Chris Crennan, Corey Harner and the Autism Society of the Greater Harrisburg Area.

The first skate instruction event was held in May 2014 at the Autism Society of the Greater Harrisburg Area’s annual Sensory Picnic. Young says the chapter and its vice president, Leora Smith Appleby, have been vital to Get on Board.

Young and his team — which includes DeMuro, Gary Dutson, Darryll Hickey and other volunteers — keep the free event by providing all equipment, including skateboards, helmets, pads and ramps. (Sponsors like Freshpark Ramps, Sanctum Longboards, Phat Dean’s and Molnar Home Computing make that possible by donating or discounting equipment or services.)

The team also has its own portable skate park, Young said.

Get on Board is running a fundraising campaign on GoFundMe.com to help maintain and expand the program.

Young says the focus of the program is really empowering kids.

“We don’t encourage kids necessarily to become skaters,” Young says. “I mean, we do. We encourage them to become the best skaters that they can be at that moment. But what we are doing is we’re encouraging them to challenge themselves, grow, experience, take chances. That’s what we’re encouraging.”

Parents must register their children prior to the event in designated time slots; Get on Board does not have age requirements participants. Four children at a time work one-on-one with instructors, with about 30 kids in attendance at each event.

‘He shreds all of us’

Young says having participants with different levels of skills sets shows beginners what kind of skater they can be one day.

One young skater, who came to Get on Board with a solid skill set, is extraordinary, Young says.

“One of the best skaters I’ve ever seen — period, hands-down — not just potential but just ability, is actually a (friend’s) son who is a 20-year-old young man with autism who skates better than all of us,” Young says. “He shreds all of us.”

Gary Dutson, a member of the Get on Board team who makes sure things run smoothly at events, has a personal reason to be involved — his son is on the autistic spectrum.

“First time, walking into the clinic seeing what these guys do — it’s just like, they got it,” Dutson says. “They know what’s going on. They can see it. They’re working with these kids. You’re seeing the success of these kids.”

At skate instruction events, Get on Board is giving kids with autism and special needs not just a place to skate, but a place to socialize and have fun with other kids, the program’s organizers say.

“There’s a need everywhere for this,” Dutson says.

Young says his teaching method is the same, whether teaching students with or without autism.

“We don’t treat them any differently than we would any other child,” Young says. “We teach the exact same methodology to this group of children that we’ve been teaching for all these years. We talk to them exactly the same. It’s not any different.”

Young and the other instructors say they see no boundaries for what kids can achieve through Get on Board.

To stay updated on upcoming Get on Board events, visit facebook.com/getonboardforautism and gofundme/autismskateboardprogram.

The art show, film screening and skate day will raise money for Get on Board, which provides free skateboarding instruction to children with autism and other special needs.