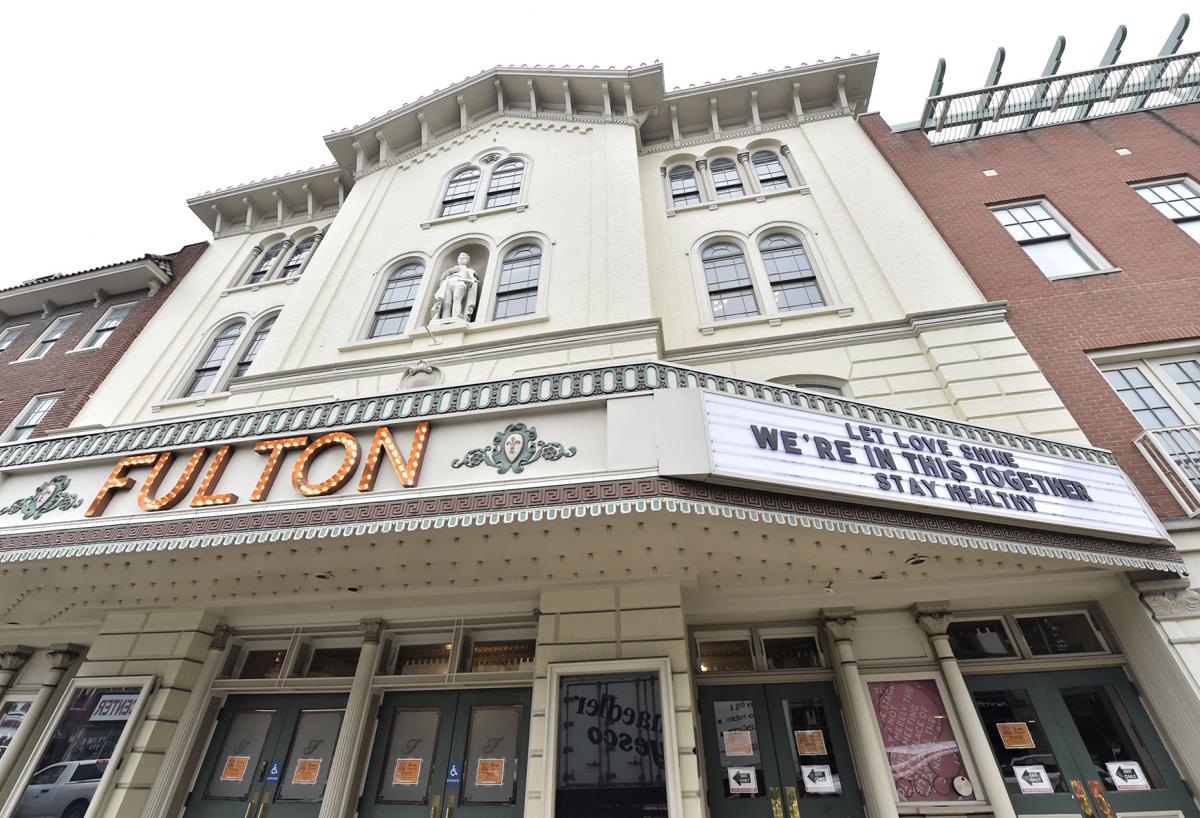 In this file photo from March, when the Fulton Theatre closed because of the COVID-19 pandemic, the theater put a positive message on its marquee for the public that was just going into lockdown mode. 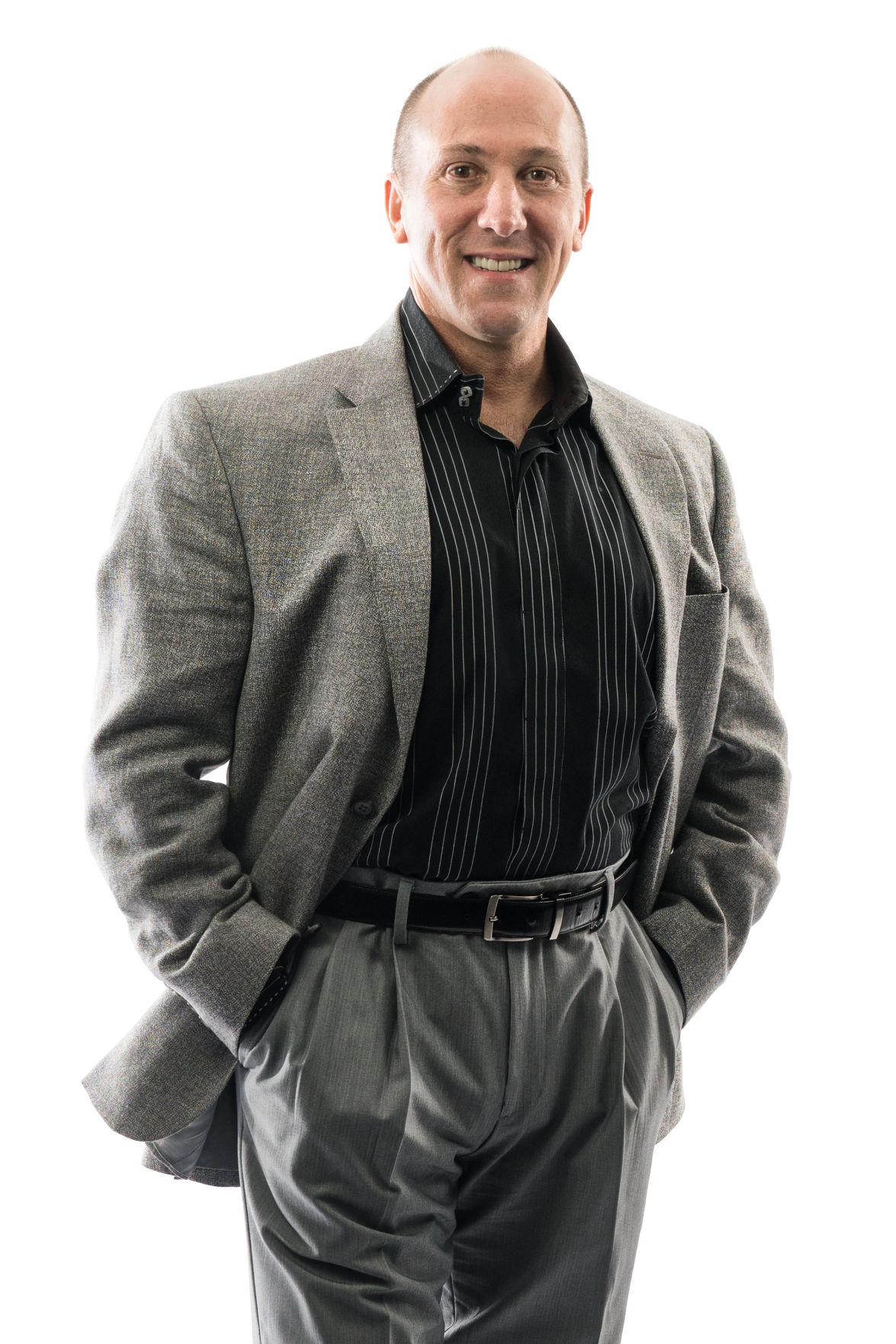 Marc Robin, executive artistic producer of the Fulton Theatre, says the mainstage shows won't return until the spring of 2021 because of health and social distancing requirements tied to the COVID-19 pandemic. 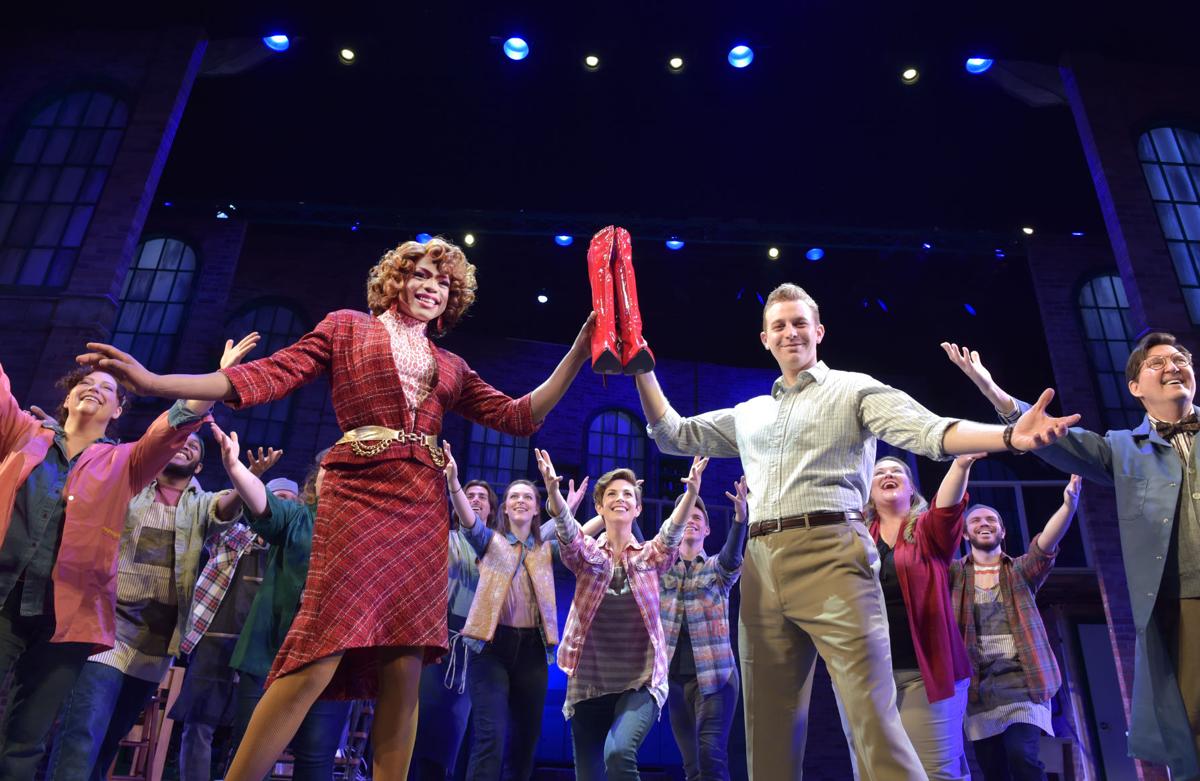 The Fulton Theatre will return to producing mainstage shows in late April or early May of 2021. It will complete the run of the musical "Kinky Boots," the run of which was interrupted by the theater's shutdown due to the COVID-19 pandemic. The show, about how creating specialty footwear for drag queens gives a shoe factory a chance at survival, starred Darius Harper, left, as Lola, and Matt Farcher as Charlie Price.

Marc Robin says it was “debilitating” to have to make recent phone calls to each of 44 Fulton Theatre employees — 70 percent of his staff — to tell them they had been laid off.

Robin, the theater’s executive artistic producer, says the layoffs were part of a big decision the Fulton is announcing today, Friday, June 12: There will be no mainstage productions at the Fulton until a year from now — the spring of 2021.

Because of the uncertainty surrounding future health and social distancing requirements tied to the COVID-19 pandemic, Robin says, the theater’s original plan to finish its mid-March-halted run of the popular musical “Kinky Boots” — and the rest of this season’s shows — this fall has been pushed way back.

“It breaks our hearts,” Robin says, “but we’re going to pause now on our main programming until” either the last week of April or first week of May 2021.

Robin says the decision to delay restarting productions for nearly a year was a unanimous one made Monday night by the theater’s board of directors.

“Right now, I’m going to focus on the positives.” Robin says. “We were able, once again, to get the rights to ‘Kinky Boots,’ followed by (the musical) ‘Titanic.’” He’s still working on rescheduling the other musical originally set for 2020, “Jersey Boys.”

That season of shows, with titles including “Rodgers and Hammerstein’s Cinderella,” “The Drowsy Chaperone,” “Crazy for You,” “Grease” and “Ragtime,” was announced right around the time the theater had to close because of the pandemic. More than 5,000 subscriptions had already been sold.

“Our hope is to not cancel anything,” Robin says, “which is setting us up to be better than a lot of theaters. ... There are theaters that won’t survive this.

“But it’s not going to be without considerable loss,” Robin adds.

“The other big positive to this,” Robin says, “is that we didn’t know how we were really going to get this new performing arts building built and ready to open while we were still running our normal shows.”

The Fulton has been engaged in a multi-million-dollar expansion project along Prince Street that will result in additional theater, lobby, restroom and event space.

“So, in a weird sort of backhanded positive, by being closed,” Robin says, “we'll be able to put all our efforts into finishing that building, and then when we reopen — which we hope will be gloriously — we’ll reopen as a new performing arts center ... retrofitted and ready to go.”

The theater must still raise about $3.5 million to complete the building project.

Robin says a “This is Our Home” fundraising campaign is expected to start this summer.

Robin says he and staff members consulted with the leadership of other theaters across the country about their plans for reopening, and also sought advice from local health care professionals about the future of COVID-19 — such as when treatments or a vaccine might be available.

Because shows must be planned months in advance, the uncertainty surrounding how long social distancing will be necessary for large groups was one of the main factors in the Fulton’s postponement decision, he says.

The main theater in the Fulton holds around 650 people. Depending on whether people come to the theater in groups of one, two or four, keeping people at least six feet apart would only allow for 132 to 250 people at each performance, with seats spaced out throughout the venue,

“We can’t afford that,” Robin says.

“And that’s not live theater,” he says. “That’s not where you’re sitting next to someone and you feel their joy or you can hear the stifling of their sobs. That’s part of the experience. I don’t want to distance people like that.”

The Fulton also put out a survey to 15,000 potential audience members, Robin says, and got about 5,000 responses.

“Forty-seven percent said if you opened the doors tomorrow, we’d be there,” he says. “We might wear masks, but we’ll be there. But 53% didn’t.”

That 53 percent really want to know it’s safe before returning to watch a show, Robin says. But there was a range of concerns among that 53 percent, he adds, from those who basically want to make sure the air is clean in the theater every day to, “I’m not coming back till there’s a vaccine,” he says.

Robin says he doesn’t want to bring audiences back for mainstage musicals until “all of the things that are important to our audiences are met. That we’re safe, that they feel secure, and that they can come back in and feel confident that the experience at the Fulton is going to be a positive one for them from beginning to end.

“I also don’t want to do any (shows) that we can’t do to the level that our audiences are expecting us to do now,” he says. He may have to substitute other musicals for some of the titles that were in the 2021 season “because I don’t know whether we’ll be able to afford to produce (some of) them.”

The theater plans to move its family series of shows to next year, as well, including “Snow White,” “The Little Mermaid” and “Beauty and the Beast.”

Robin notes some of the 2020 Ellen Arnold Groff Series of plays that had been planned for the smaller, upstairs Tell Theatre might be able to be performed in the main theater if the space were reconfigured to seat about 100 audience members — with the stage built out over the orchestra seats, and people seated in the balcony, boxes and on the stage.

Audience members who have already bought tickets for the Fulton seasons have three options, Robin says.

“You can ask for a refund because you don’t want to wait until next year.” Robin says. He adds he hopes most will take the second option, which is that their seats will automatically remain reserved for the rescheduled shows next year.

For those who can’t come to those performances, he says, he hopes they’ll consider a third option — giving the ticket back to the theater as a tax-deductible donation, so the theater doesn’t lose any of the revenue it needs to move forward.

Robin says he’s not looking at the next year as a “pause” rather than a “closing.”

He says the theater will continue to produce some of the online programming it has been creating over the past few weeks — such as cabarets, story times and interview shows.

In addition, while the Fulton Academy in-person theater classes for young people are canceled for the summer, free online classes will be offered in August.

Robin says the Fulton wants to remind audience members to continue to into Lancaster city and support local shops and restaurants, “because the Fulton is one of the largest economic drivers of the businesses downtown.”

And he wants to stay positive, though he’s missing seeing the audience in the theater.

“If we buy into the doom and gloom of this ... we’re never going to get back,” Robin says. “We’re really, really hopeful that everybody will be patient.

“But we're confident `that the arts in Lancaster are an important part of the necessary engine that drives downtown Lancaster,” Robin says. “And our part in that, we have to own. And we do.”

• For information on tickets and refunds, go online to TheFulton.org.

• New tickets to the rescheduled shows will be mailed out in the fall.

•  New subscriptions will go on sale in November.

Festival Latinoamericano canceled for 2020, will return in 2021

Restaurant owners must protect everyone, including workers [opinion]

I’ve worked in restaurants for more than 20 years — the last three in Lancaster. Restaurants are a vital part of our communities, but the hear…

The Dutch Apple announced Monday, June 22, that it is reopening Friday, July 17. This information in this story, which was originally posted J…

Update: "The Taming of the Shrew" can be streamed on the People's Shakespeare Project's YouTube channel, not Facebook Live.

On June 26, a changed Celebrate Lancaster will spread food, music and fireworks around the city

For the past three months, salon co-owner Cathy Wagner and her stylists have been calling each client with an upcoming appointment to say the …

The highlight of my sophomore year in high school was performing in our drama club’s production of “Godspell.”